A Popular Manhattan Showhouse Heads to the Hamptons 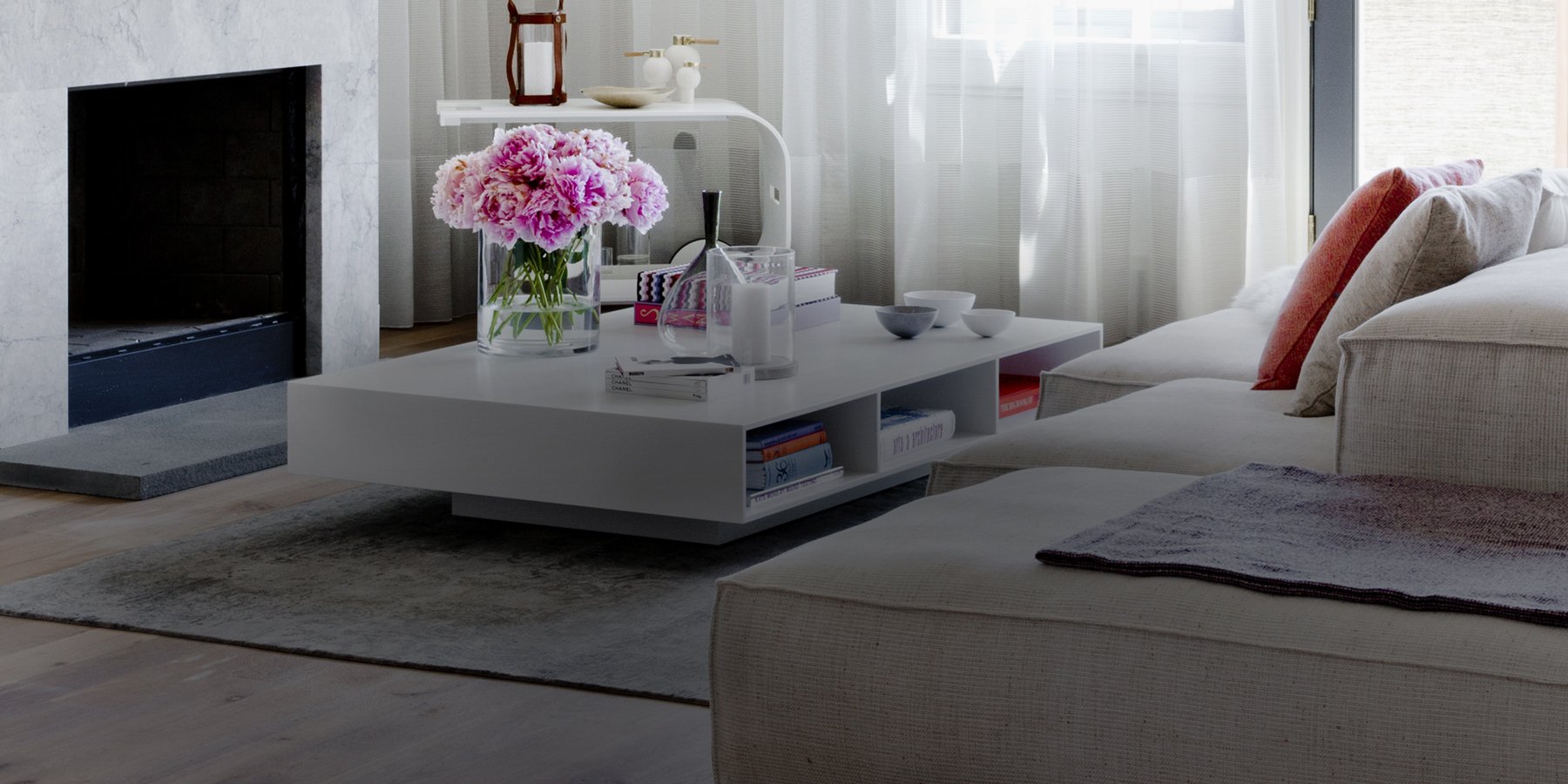 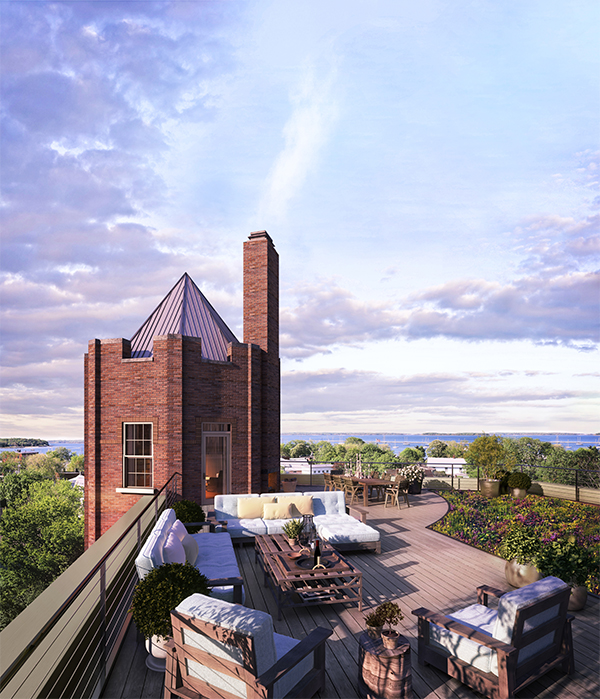 July 2, 2014This year’s Holiday House Hamptons takes place in a former factory that has been converted into a luxury residential building called the Watchcase, where each penthouse has its own private rooftop terrace with expansive views. Top: Inside the showhouse is a light-filled living room by West Chin, who also designed the coffee table and bar cart (photo by Rikki Snyder Photo, courtesy of Cape Advisors).

Every year, various charities organize decorator showhouses in the Hamptons, Long Island’s summer playground, with builders lending brand-new properties to different causes as a way of introducing the homes to potential buyers.

The Holiday House Hamptons presents a twist on the trope: organized by Iris Dankner, a Long Island–based interior designer, and the magazine Hamptons Cottages & Gardens (HC&G), the eye-catching showhouse has taken up residence in a late-19th-century factory in the quintessential whaling town of Sag Harbor. The brick behemoth once housed 350 workers, and for a years it was the only large-scale industrial operation in the East End, serving as Bulova’s watchcase-production facility until 1981.

“What’s special about this showhouse is its unique venue in the Watchcase factory,” says Kendell Cronstrom, editor-in-chief of HC&G. “Instead of a sprawling spec house with endless cookie-cutter rooms, you get these vastly different spaces, which the designers have done a terrific job reimagining. Not a single design scheme is the same, yet everything flows together beautifully.” Proceeds from the showhouse benefit the Breast Cancer Research Foundation (BCRF), a New York charity founded by the late Evelyn Lauder.

Until recently, longtime residents of Sag Harbor were saddened by the decaying, once-noble factory, which has changed hands several times. However, its current owner, the New York developer Cape Advisors, has now meticulously renovated the structure into what is being touted as the Hamptons’ first resort-style luxury condominium, complete with a pool, gym, spa, underground parking, private party rooms and landscaped gardens. 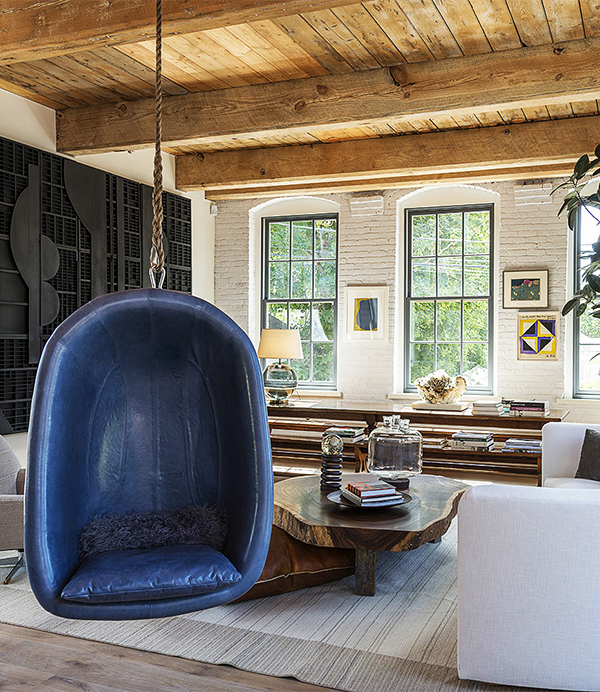 In James Huniford’s living room, a blue leather chair is suspended from the ceiling and a Louise Nevelson sculpture made from black-stained wood hangs on the wall on the left. Photo by Paul Domzal, Edge Media

Cape Advisors carved out 47 lofts, apartments and penthouses in the factory and then built nine new freestanding town houses and seven bungalows (the project is scheduled for completion by the end of the year). But whether you’re planning on moving in for Christmas or just sneaking a curious peek, Holiday House Hamptons, which runs through September 1, offers the perfect opportunity to see this ambitious redevelopment in its best light.

A breast cancer survivor, Dankner created this showhouse event six years ago in Manhattan, when she perceived a lack of design-focused charitable happenings benefitting women’s issues. (Since its founding in 2008, Holiday House has raised more than $1 million for breast cancer research.) “Last year, we did our first Holiday House in the Hamptons — we raised $500,000 — so this year I approached Watchcase with the help of my partner HC&G. I wanted a space that was new and exciting, not just an ordinary spec house. Of course, this has been trickier because we are in the middle of a construction site.”

Some 16 designers have nonetheless worked wonders, creating dramatic spaces, both indoors and out. James “Ford” Huniford has the grandest in the factory building proper: an 1,800-square-foot living room/open kitchen, with 12-foot-high beamed ceilings and rows of windows on three sides. Great art dominates the space, which is modern in feeling, with a subtle gray and white palette. A large Louise Nevelson sculpture in black-stained wood lines one wall, with paintings by Al Held and Josef Albers hanging on others. It also boasts one great antique piece: an 18-foot-long refectory-style English table with matching benches, which Huniford found in Belgium.

Into this mix, he added a C-shaped white sofa from his own furniture line, a blue-leather egg chair which hangs from the ceiling, two gray globe lamps and a pair of vintage steel-frame club chairs. He created the industrial-style lighting fixtures for the kitchen and — best of all — had an elaborate watchcase cast in a sphere of resin as a tribute to the origins of the space; it’s now his coffee-table centerpiece. 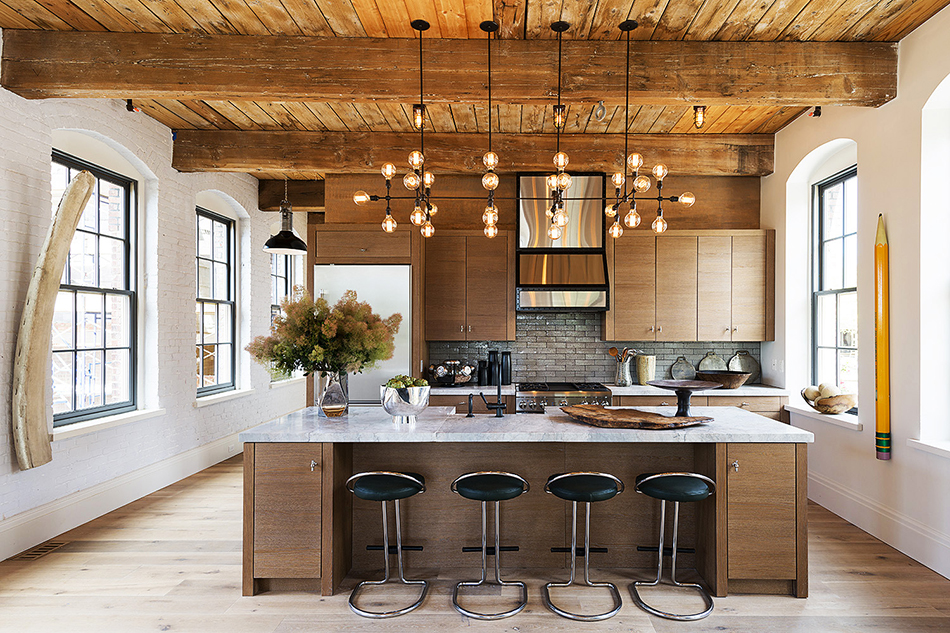 Huniford’s industrial-chic kitchen for the showhouse includes a custom light fixture by Huniford Design Studio and circa-1965 bar stools from The Warehouse, in New York. Photo by Paul Domzal, Edge Media 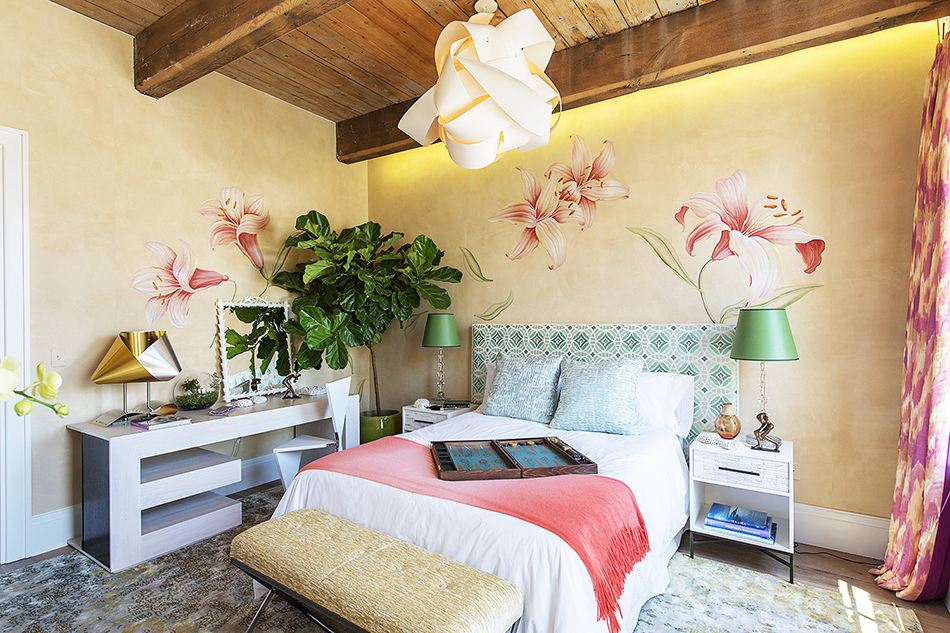 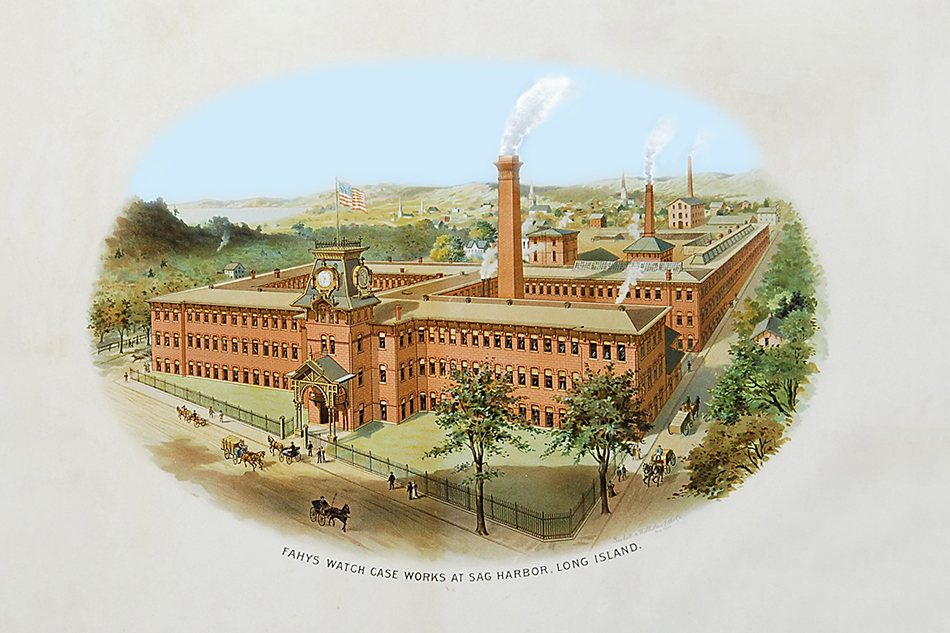 The Watchcase is seen here in its original state, as a factory built in 1881. Image courtesy of John Jermain Memorial Library, Sag Harbor 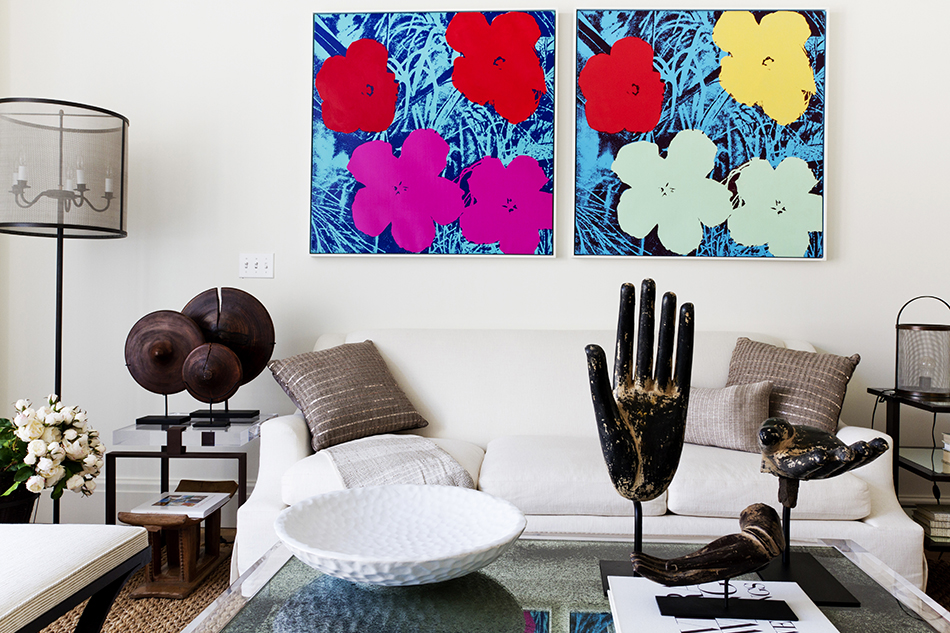 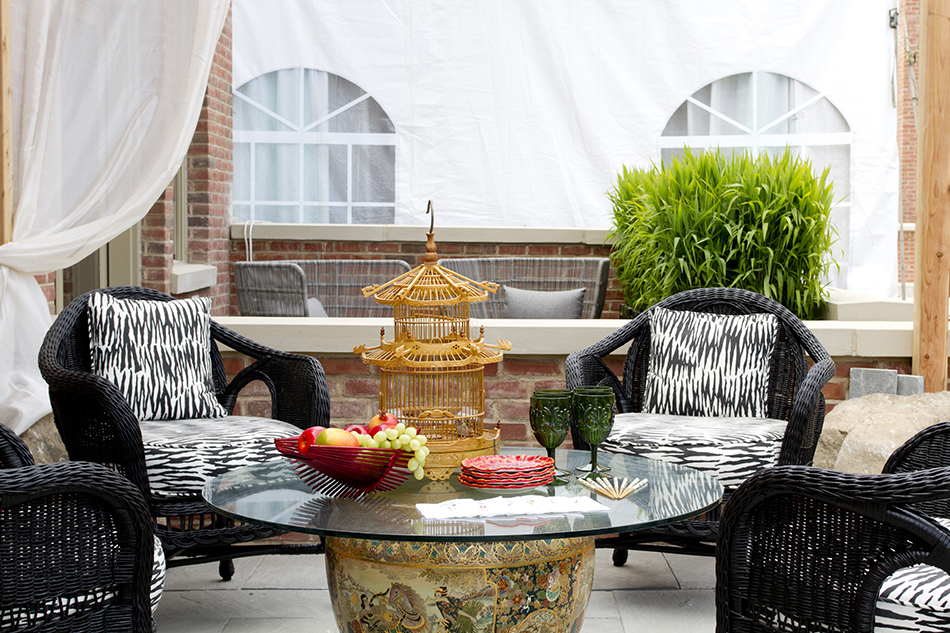 The terrace by Eugènia Au Kim, of the Design Studio, wouldn’t look out of place in Bali. Photo by Rikki Snyder 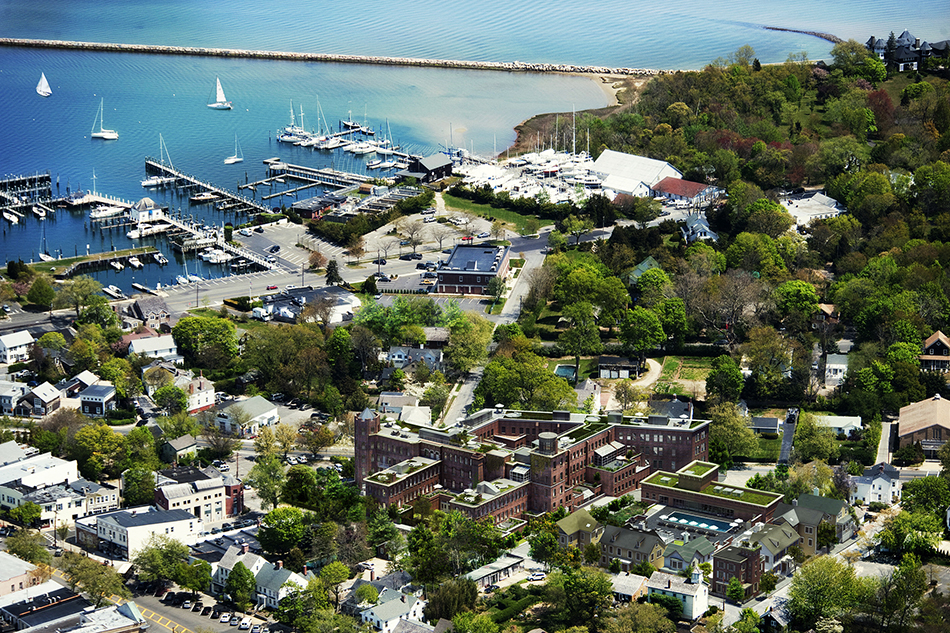 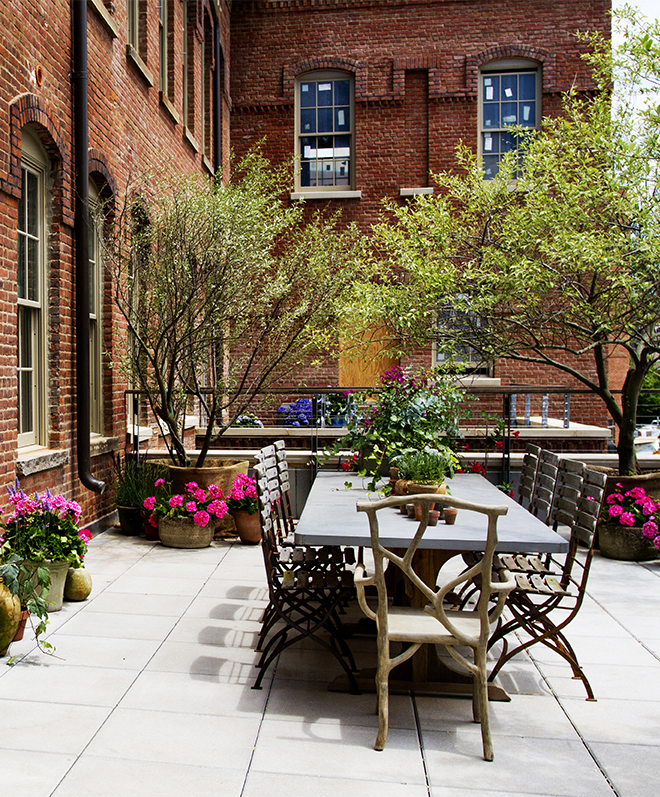 Milly de Cabrol and Ani Antreasyan transformed a terrace into a sweet-smelling escape using a pair of lime trees, a variety of plantings and furniture from Mecox Gardens. Photo by Rikki Snyder

Off Huniford’s room is a large terrace, on which decorator Milly de Cabrol and landscape designer Ani Antreasyan have created an enchanting Italian oasis, with full-grown olive trees shading Italian pottery tubs planted with miniature lime trees, geraniums, fragrant rosemary and lavender. As multihued as this terrace is, it has met its match in the nearby master bedroom designed by New York architect Campion Platt, who’s not ordinarily known for colorful spaces. Here, however, he has painted the walls mustard yellow with a pattern of giant pink day lilies. The upholstered headboard and lamps are a vibrant green, and the curtains a coral and pink ikat.

“This room is very unusual for me,” Platt says. “We channeled the sensual exuberance of a wealthy Hamptonite, whom we imagined to have transplanted from her nearby manse to a more pampered existence of loft-living in this famous whaling town. She is not afraid of bold colors and rich finishes that mimic her take-no-prisoners approach to life.” As an example, he points to an amazing geometric white-lacquered writing desk and triangle chair by local furniture-maker Max Eicke, which looks like something Rudolf Schindler could have designed.

As one of the chairs of the event’s opening-night gala, superstar New York decorator Vicente Wolf opted to decorate the showhouse’s VIP tent, where design fans gathered in support of the BCRF last Saturday. He’s filled it with over-scaled furniture from the new Fendi Casa line and voluptuous draperies of turquoise and white Dedar fabric from Milan. 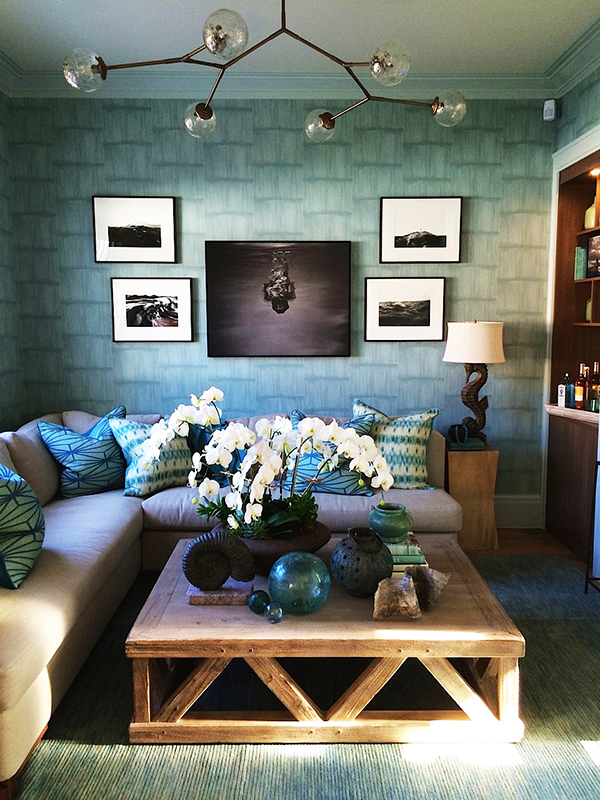 Around the corner, Dankner has transformed a living/dining room in one of Watchcase’s one-bedroom bungalows. This space is modern and casual, with all-white upholstered pieces, a starburst mirror, marble-top tables and coral objets. To this, she added colorful Andy Warhol flower prints, amoeba-like contemporary glass lamps and mesh light fixtures (both from Interieurs), and Asian wood sculptures and urns from VW Home by Vicente Wolf. (Veteran decorator Eugènia Au Kim, from the Design Studio in nearby Bridgehampton, fitted the terrace outside Dankner’s room with billowing white silk curtains to enhance the serenity of it all.)

New York architect West Chin says the theme of his townhouse’s living/dining room is “summer love, inspired by the romanticism of the Hamptons.” He continues: “Our vision was to create a soft, airy space that mirrored the life and fluid forms of the area.” Here, the standout is Lindsey Adelman’s Bubbles chandelier, designed for Brooklyn-based Roll & Hill; it’s a cluster of glass pendants suspended by nautical ropes that allude to what Chin calls “the essence of the Hamptons: the ocean.”

Also looking to the sea is Sag Harbor designer John Bjornen, who gave the media room near Chin’s space a nautical theme with blue-green vinyl wallpaper and a blue Odegard wool and silk rug plus blue-patterned Lee Jofa ikat curtains and pillows. A pair of seahorse lamps seem happy in their watery Hamptons home. Wouldn’t you be, too?