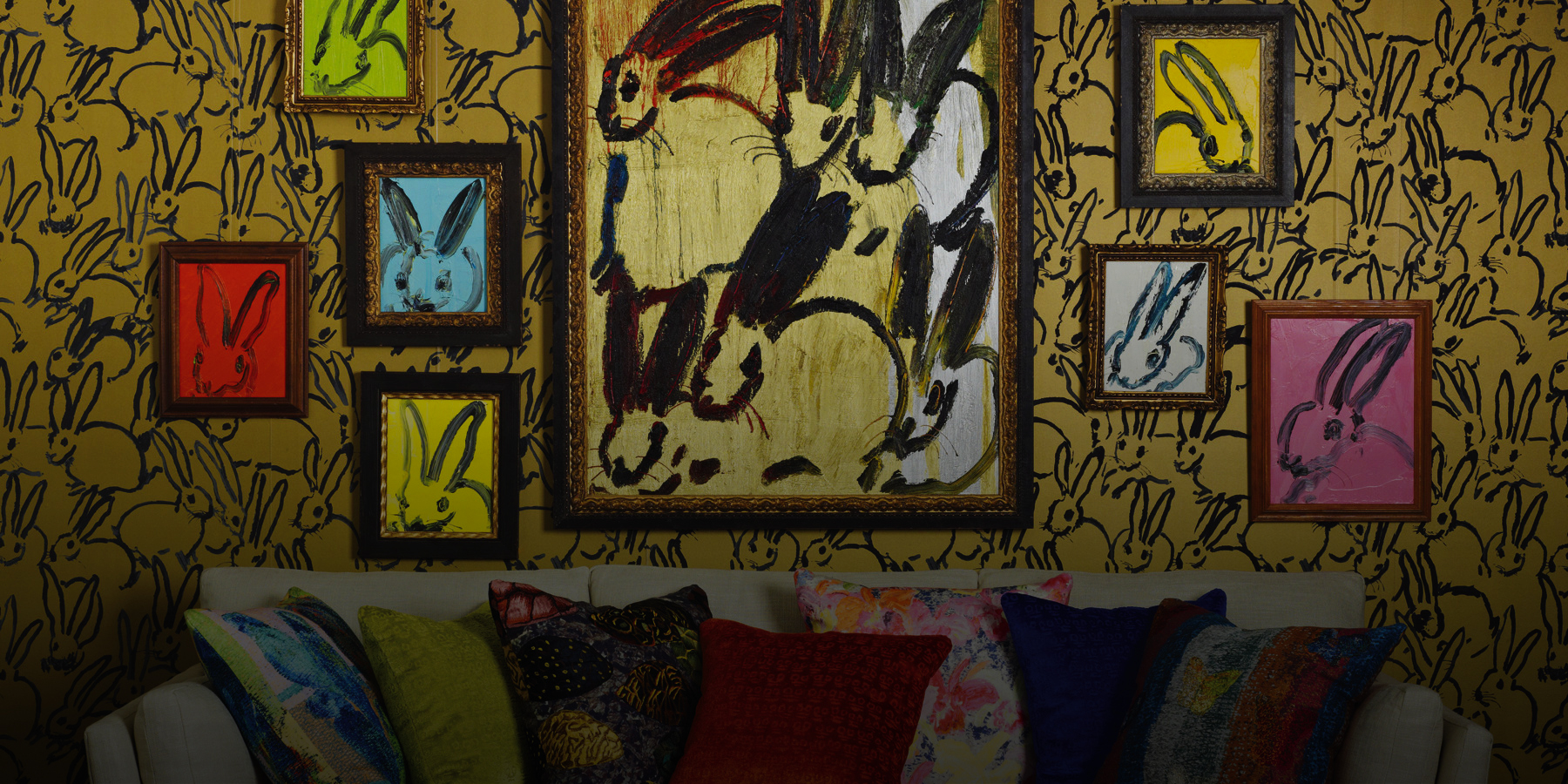 With two new series of rabbit-themed prints, Hunt Slonem — known for his whimsical, animal-bedecked images — joins the ranks of fine artists who have designed wallpapers, from Albrecht Dürer to Andy Warhol. 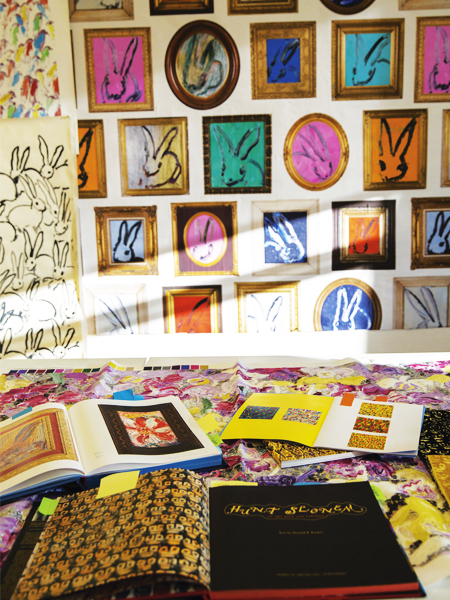 June 7, 2015Top: Designed for Groundworks at Lee Jofa, Hunt Slonem’s two new series of wallpapers are based on sketches of bunnies — gathered together in a huddle or represented in trompe l’oeil picture frames. Above: The collaboration also includes textiles and fabrics in a range of colors and patterns. All Slonem photos courtesy of Hunt Slonem for Groundworks at Lee Jofa

Hunt Slonem has mastered the art of repetition in his exuberant Neo-Expressionist paintings. Some of his favorite subjects are rabbits, butterflies and the tropical birds that live in the private aviary nestled within his 30,000-square-foot studio complex in Brooklyn. And he has portrayed these creatures hundreds of times — albeit never in the same way twice.

It can be a thrilling visual experience to seek out the consistencies and differences among these serialized works, especially when they are hung in a grid of similar compositions, as the 64-year-old Slonem is wont to do. “I believe in repetition like a holy mantra or rosary,” he says. “I am slightly influenced by Pop art, like the repetition of soup cans, postage stamps and celebrities. It’s something I have been doing my whole life.”

Because of this repetition, Slonem’s art is ripe for transformation into wallpaper, as can now be seen in his new designs for Groundworks at Lee Jofa, which center on his rabbit motifs. One version, called Bunny Wall, re-creates a salon-style wall in Slonem’s studio, complete with trompe l’oeil reproductions of framed bunny paintings in a multitude of colors. The other design, Hutch, features rabbits painted as black outlines that seem to hop around and communicate with one another. 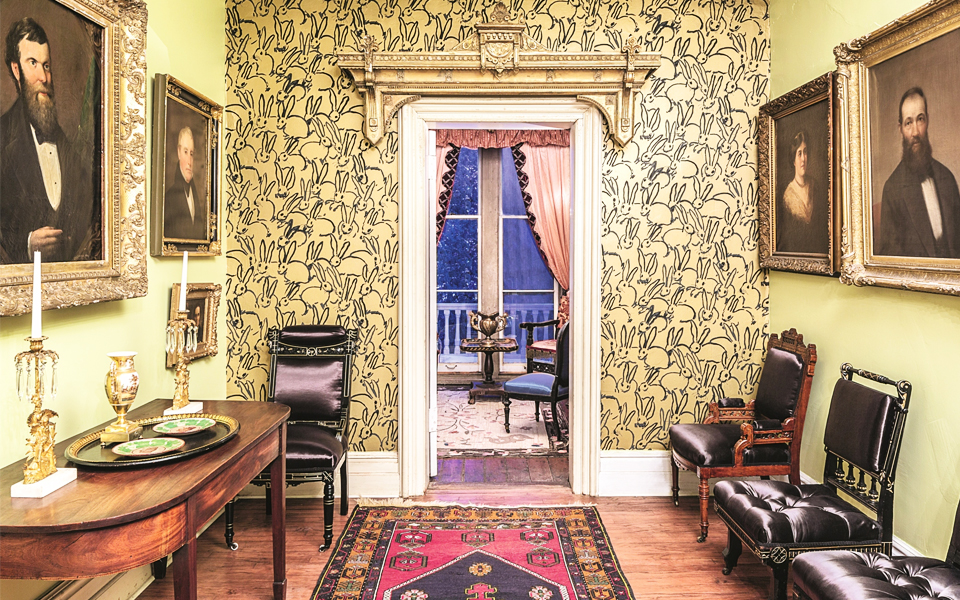 A wall in the historic Cordts Mansion, in Kingston, New York — one of Slonem’s multiple residences — features his yellow Hutch wallpaper; the artist is known for bold juxtapositions of color, texture and style, as seen here. 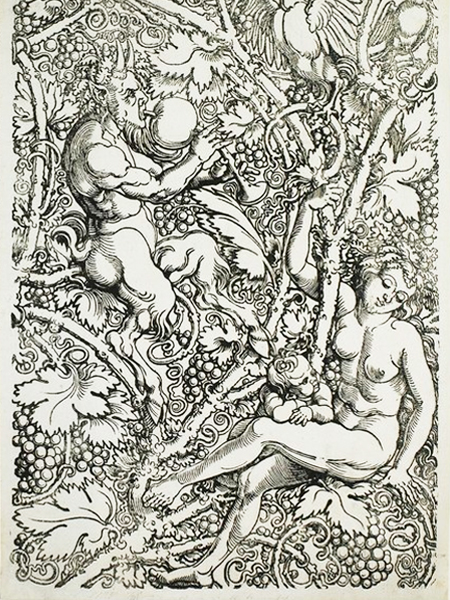 Albrecht Dürer’s The Satyr Family, ca. 1515, is among the earliest surviving examples of wallpaper.

In addition to his sprawling Brooklyn space, Slonem has a historic mansion in Kingston, New York, a former armory in Scranton, Pennsylvania, and two plantation estates in Louisiana. In each of his homes, the artist strategically mingles brightly colored wall paints, assorted furniture, fine antiques and his own artworks. “I am a collector of things. My primary focus is color and objects. I love to make them work in a space,” he says. “Sometimes I define a space with color.”

While Slonem’s artistic style is avidly contemporary, the act of portraying nature scenes on wallpaper goes back to the very earliest designs. No doubt, artists have been printing pictures on wallpapers ever since the form was invented (probably in China), but the oldest attributed artist-made wallpaper belongs to German Renaissance master Albrecht Dürer. That woodblock-printed pattern, dating to around 1515, shows a horned satyr playing a strange flute for his naked wife and their baby. Nearby, two birds chortle, a phoenix spreads its wings, and arabesque grapevines engulf the whole scene. “The wallpaper’s subject is bold and bacchanalian,” Marilyn Oliver Hapgood writes of the composition in Wallpaper and the Artist: from Dürer to Warhol. “Dürer formed a most ingenious complete pattern by turning over the design, the whole having been conceived in such a way that the two sides, when combined, create the decorative and symbolic patterns with grapevines.” 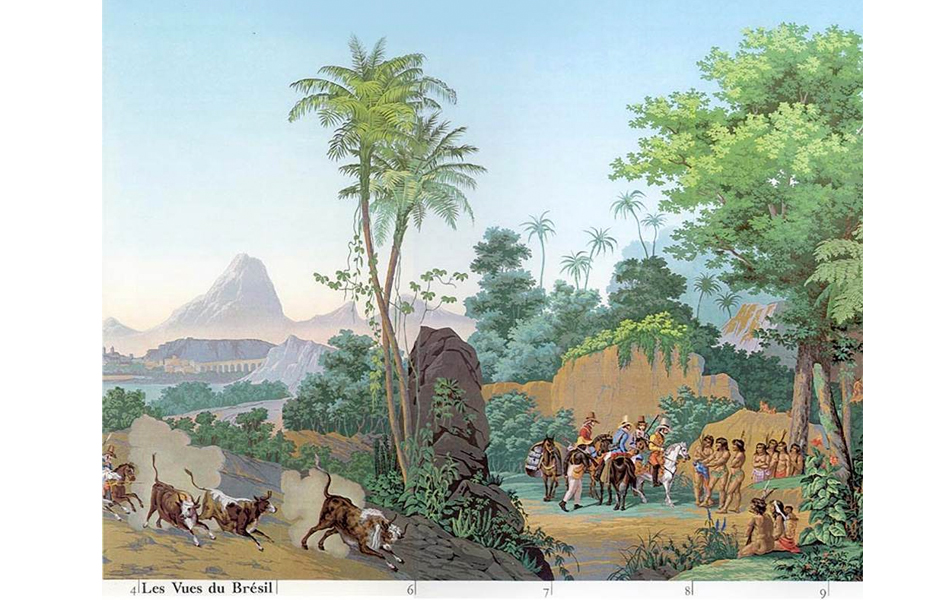 This segment of wallpaper from the 30-panel “Views of Brazil” series, designed by French artist Jean-Julien Deltil in 1828, demonstrates post-revolutionary, 19th-century France’s emphasis on room-sized installations that engulf viewers in panoramic views and environments.

Perhaps the next big advance in wallpaper design arrived at the start of the 19th century, when celebrated French artists (with now-unfamiliar names like Jean Broc and Jean-Julien Deltil) started making heroic wallpaper murals featuring famous battles, exotic peoples and far-off lands. Those designs are very different from our concept of wallpaper today, since the scenes are massive, illusional and continuous rather than small, graphic and repetitive. Such panoramas were also incredibly inefficient to make; they required hundreds of printing blocks that took years to carve. They were therefore most often found in the homes of royals, aristocrats and heads of state.

In the latter part of the 19th century, neoclassical vistas went out of style, as artists like the Pre-Raphaelites and British polymath William Morris brought back the romance and craftsmanship of the Middle Ages. For his wallpaper designs, Morris, who is considered the founder of the Arts and Crafts movement, borrowed decorative patterns of leaves and flowers from medieval tapestries. These floral effusions were old-fashioned in their origins but contemporary in their graphic outlines and color schemes. And while Arts and Crafts is historically seen as low-tech and focused on the handmade, Morris understood the need for mechanization in wallpaper production. “I think the real way to deal successfully with designing for paper hangings is to accept their mechanical nature frankly, to avoid falling into the trap of trying to make your paper look as if it were painted by hand,” he once wrote. 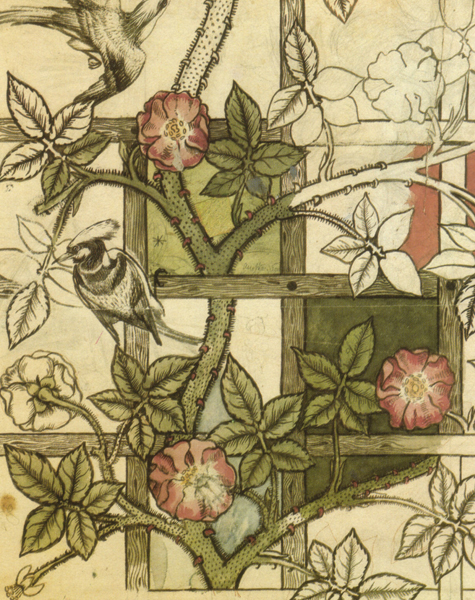 British Renaissance man William Morris created this original design for his Trellis wallpaper in 1862 — inspired, as the story goes, by the rose-trellis in the garden of his home in Kent — but it was not issued until 1864. 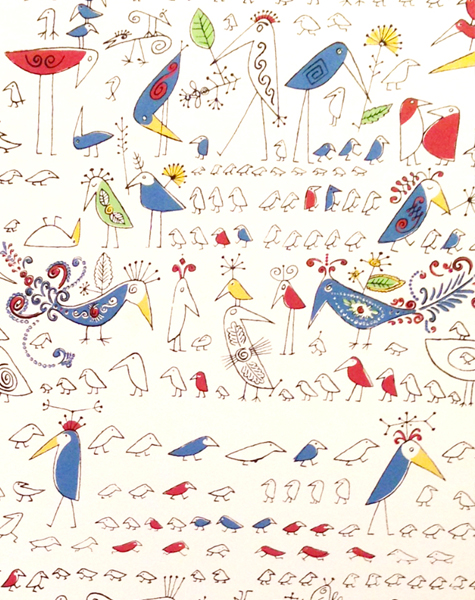 The Aviary wallpaper created by legendary cartoonist and New Yorker illustrator Saul Steinberg features a hand-drawn pattern of fanciful birds that exemplifies his emphasis on both youthful whimsy and mechanical precision. Photo courtesy of and available from DecoratorsBest

While Slonem’s artistic style is avidly contemporary, the act of portraying nature scenes on wallpaper goes back to the very earliest designs. 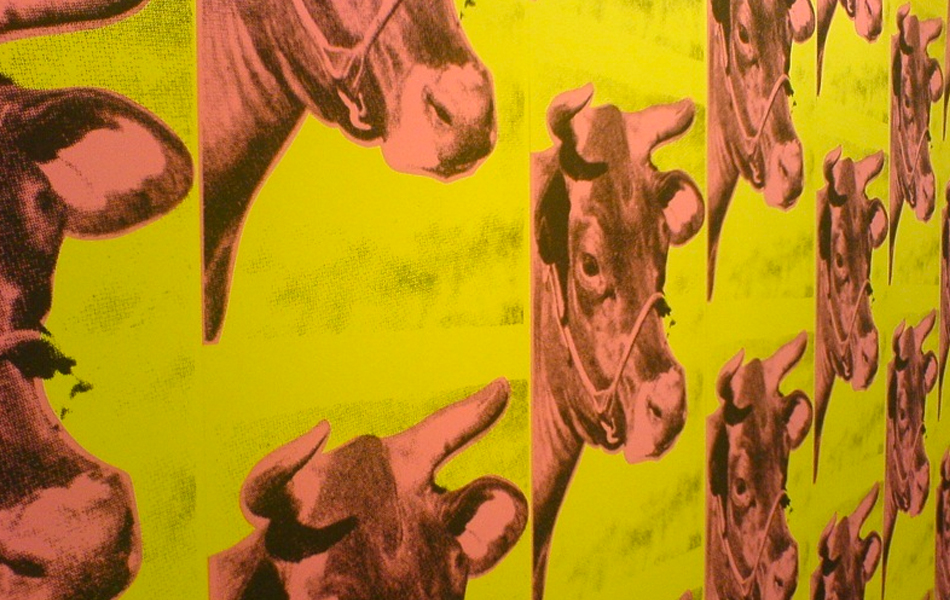 Andy Warhol’s Cow wallpaper, created in 1966, marked his initial foray into the medium — but his wallpapers have never been commercially available and are used exclusively in museum installations of his work.

Then came modernism, and artist-made wallpaper, like all art and design, was turned on its head. Gone were the throwback frills of Morris’s flowers and leaves. Instead, early modernists touted a stripped-down, utilitarian aesthetic. The Bauhaus school produced its first wallpapers, emblazoned with textured abstractions, in 1927 — and they quickly became a hit. “They were designed to be affordable and available to all,” Hapgood explains in her book. “Royalties from the wallpapers became an important source of income for the institute. In the first year, four-and-a-half million rolls were produced.” Even the radical purist Le Corbusier got into the wallpaper game, initially creating papers in solid colors and then ones with geometric nubs and patterns. 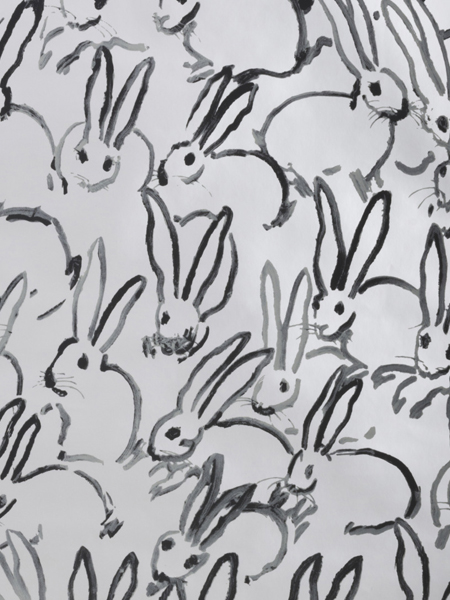 Subsequent 20th-century artists viewed the decorative arts as superfluous and silly, so they approached wallpaper design with an ironic sense of humor, if they approached it at all. Cartoonist and illustrator Saul Steinberg, best known for his work for the New Yorker, conceived wallpapers imprinted with stick-figure birds and caricatures of people and places; Swiss artist Jean Tinguely cobbled together an eclectic arrangement of crabs, butterflies, flowers, umbrellas, scuba gear, old-time-y cars and cowboys and Indians; British Pop artist Allen Jones positioned a busty dominatrix over a bright orange backdrop; and Andy Warhol famously covered gallery walls with his “Cow” and “Mao” wallpapers, in the repetitious Pop manner that influences Hunt Slonem today.

Slonem’s bunny wallpapers, in fact, combine most of these traditions from the past 400 years: They depict wildlife, they use repetition, they are stylish, they are funny — and they are personal in an understated way. “I am the sign of the rabbit in the Chinese zodiac,” Slonem says. “I have been painting rabbits since even my earliest works. They seem to have a joyous effect on people.” He adds of his new wallpaper designs: “I was so pleased with the results, I have used them in all of my houses.” 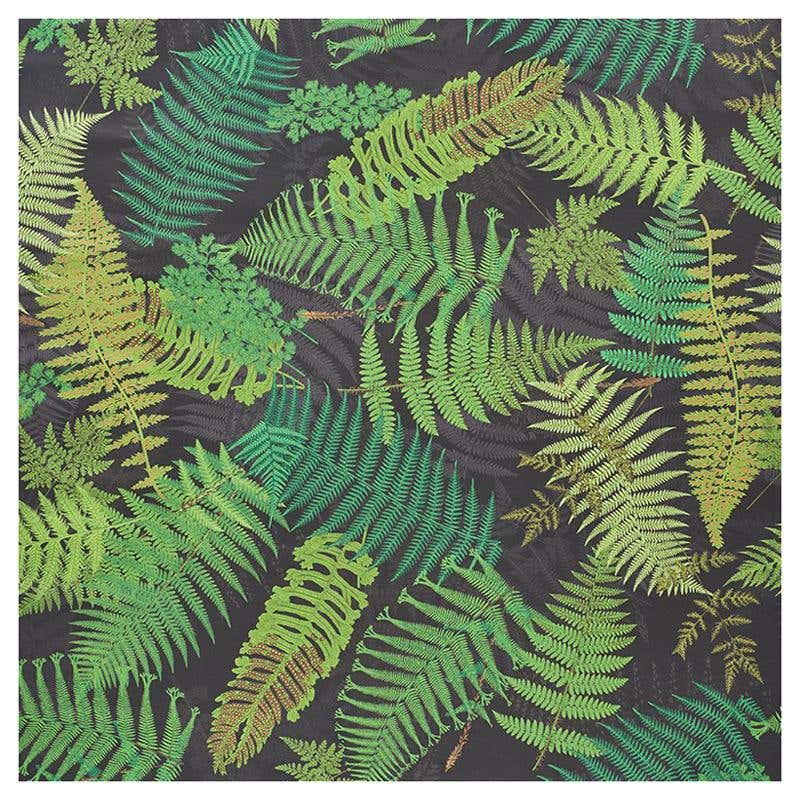 Browse Wallpaper on 1stdibs
Shop All