These Are the Most Talked-About Interiors from the Past Century 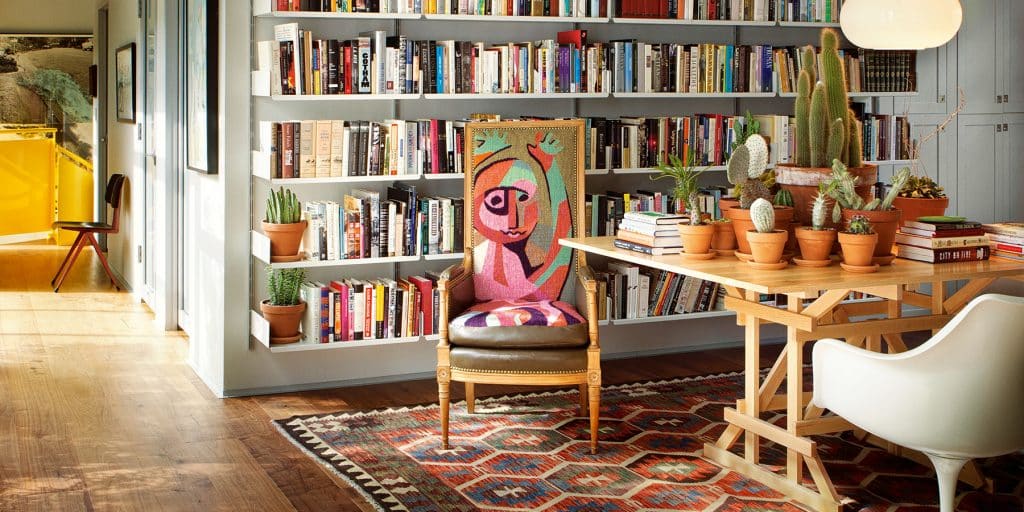 From elegantly streamlined spaces to exuberant celebrations of maximalism, an encyclopedic new volume highlights the world's most extraordinary rooms. 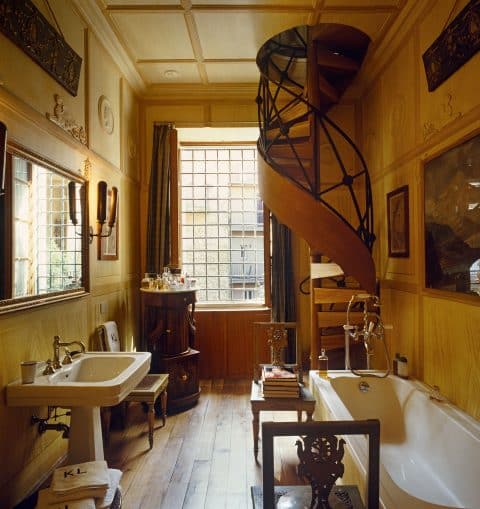 May 26, 2019Hundreds of the world’s most exceptional spaces are highlighted in Interiors: The Greatest Rooms of the Century (Phaidon), with an introduction by William Norwich. Above: A wood-paneled bathroom in Karl Lagerfeld’s Rome apartment, completed in the 1990s, features a spiral staircase that leads to a bedroom (photo by Fritz von der Schulenburg). Top: The library of a Los Angeles home by The Archers, completed in 2017, is emblematic of the eclectic yet cohesive interiors the firm creates for clients who love color and pattern (photo by The Archers/Richard Petit).

Starting from the invention of the interior decorating business, for which Elsie de Wolfe took credit more than 100 years ago, what are the rooms and the masterminds behind them that continue to resonate? That question is answered in Phaidon’s Interiors: The Greatest Rooms of the Century, which follows the A-to-Z encyclopedic format of two of Phaidon’s most successful titles, The Art Book and The Fashion Book. Three years in the making, Interiors is an achievement I am very proud of. Prior to joining Phaidon as the commissioning editor for fashion and interior design books, I wrote and edited many house stories at such publications as Vogue, the New York Times and House & Garden. Between that work experience and having had the good fortune over the decades to meet and visit many decorators and patrons of the decorative arts, I came to believe that there is a canon of knowledge, by which I mean an unwritten repository of references, that people — decorators, designers, architects, notable patrons, arbiters, editors and influencers — tap into when they talk about interior design. I was determined to capture that knowledge between the (velvet, in four collectible colors!) covers of a book. 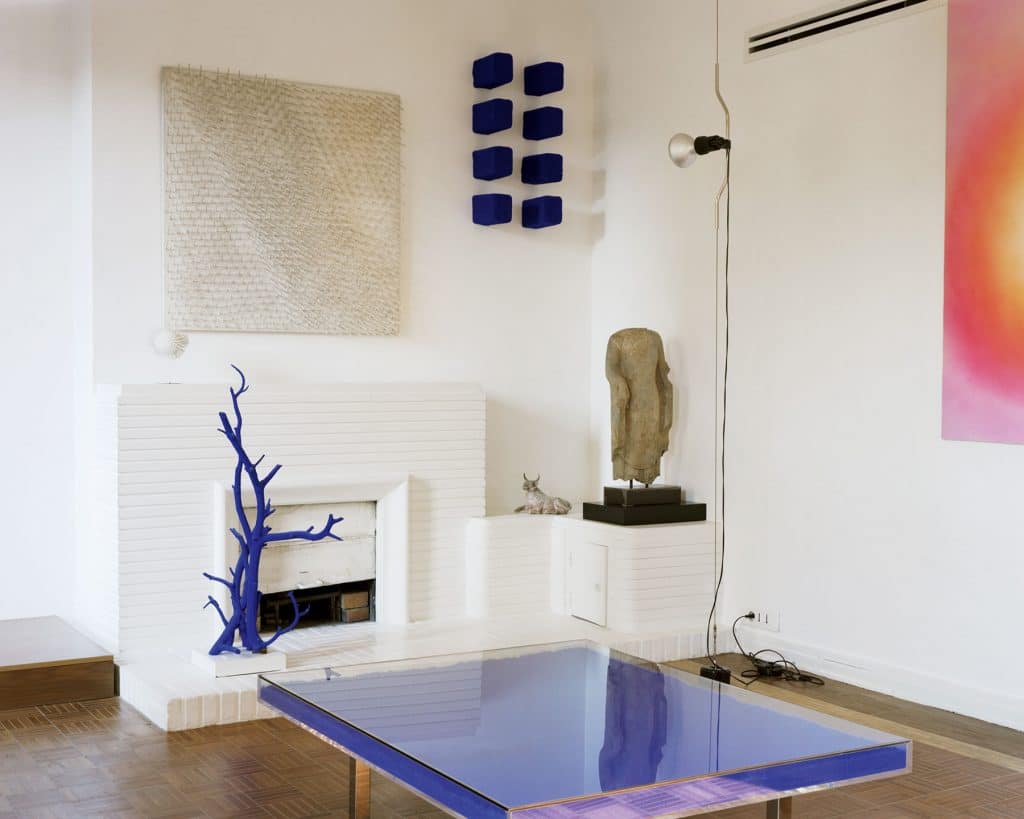 Yves Klein painted the doors, walls and brick fireplace of his Paris home white before moving into the residence, which was finished in 1949. After Klein’s death, his widow, artist Rotraut Uecker, patented his acrylic coffee table filled with International Klein Blue pigment, an example of which is seen here. Photo by François Coquerel © Succession Yves Klein c/o DACS 2019

I don’t consider myself any kind of decorating expert. I don’t know where the piano that once belonged to your grandmother should go. But the years have been good to me, affording me access to the best thinking of professionals, patrons and interiors editors and stylists. Back in my early 20s on Nantucket, I knew Billy Baldwin. He had retired to the island, and I was spending a gap year there trying to become a writer. I was introduced to him by my friend Rita Delafield Kip, who brought me to visit him at his cottage in ’Sconset , after which we all had lunch at the Opera House restaurant. Rita was an interiors enthusiast who gave Mario Buatta one of his first big jobs in New York and had consulted with Billy on her imposing brick house on Nantucket’s Main Street. I loved hearing Billy’s stories about working for such patrons as Bunny Mellon and Babe Paley, extolling the purity and simplicity of their style and tastes.

Martin Brudnizki removed walls in his London flat to create an open-plan living space, in which he layered furniture styles, lighting, patterns and textiles. He completed the project in 2014. Photo by James McDonald 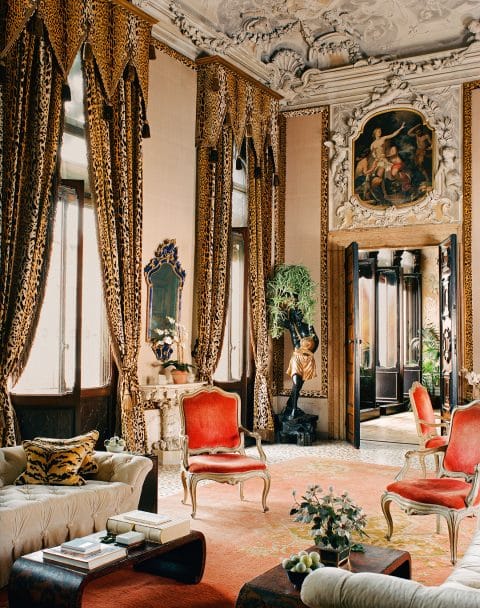 In the 1980s, Tony Duquette and Hutton Wilkinson worked together on the 12th-century Palazzo Brandolini in Venice for clients Dodie and John Rosekrans, lavishly decorating the piano nobile’s grand salons. Photo by Fernando Bengoechea

After moving to New York City in 1976, through the parents of school friends, I met decorators like Albert Hadley and Robert Yoh (a former Zoli model who was mentored by Albert), Betty Sherrill, Mark Hampton, Buatta and Mica Ertegun and Chessy Rayner. Once I started working as a journalist, writing mostly about society and fashion, I met many more legends, patrons and editors — Nancy Novogrod, Tom Ford, Hamish Bowles, Bill Blass, Nan Kempner and Lee Radziwill — along with photographers François Halard, Pascal Chevalier, Oberto Gili, François Dischinger, Pieter Estersohn, Todd Eberle and, later, Douglas Friedman, among many others. For me, their stories and their heartfelt opinions held great interest. And, of course, they were highly entertaining.

Known for his sensual take on fashion, Helmut Newton also loved architecture and interiors, and his Condé Nast contract back in the day guaranteed that he could shoot a certain number of stories each year for House & Garden, where I worked at the time. I was appointed his editor. “Every story we see has the story we can’t see but have to find,” Helmut told me. Whether this took the form of photographing shadows on the lawns of houses in Palm Beach or capturing images of the homeowner talking to her children unaware of the camera, Helmut looked for the great reveals. 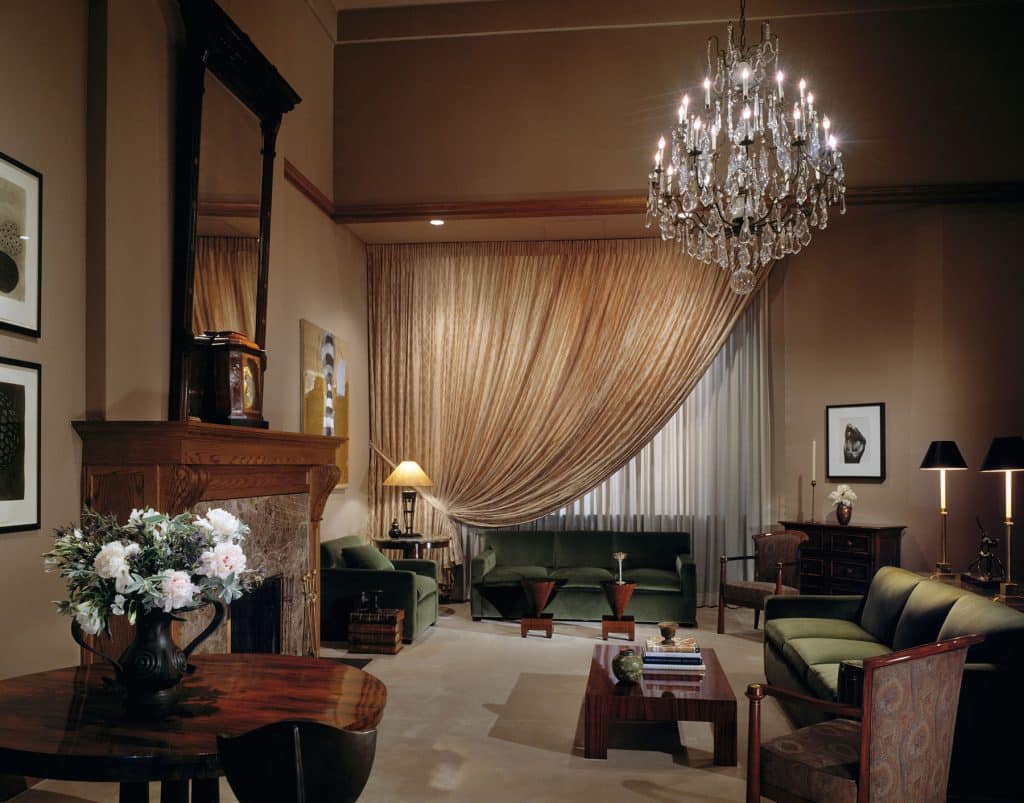 “The ambitious window treatment seemed appropriate for the scale and the drama of the room,” Glen Gissler says in Interiors about this soaring Upper West Side living room, which he designed in 1995 for a couple who entertain often. Photo by Peter Mauss / Esto

All these arbiters were my teachers; I was educated by their stories and likes and dislikes. For the book, I squeezed my brain for all my learnings and came up with an initial list: 970 rooms! I put that list aside and asked for the input of some three dozen people whose opinions I trust, explaining that this did not have to be a collection of rooms we unanimously like, and that we’d publish work by designers and patrons whose taste we might even dislike yet still recognize as influential. Their responses were essential in honing the book to a more manageable number of candidates.

Sasha Bikoff designed this New Jersey home in 2016 for a couple who tasked her with modernizing the color palette and arranging their collection of heirlooms and antiques. Photo by Patrick Cline 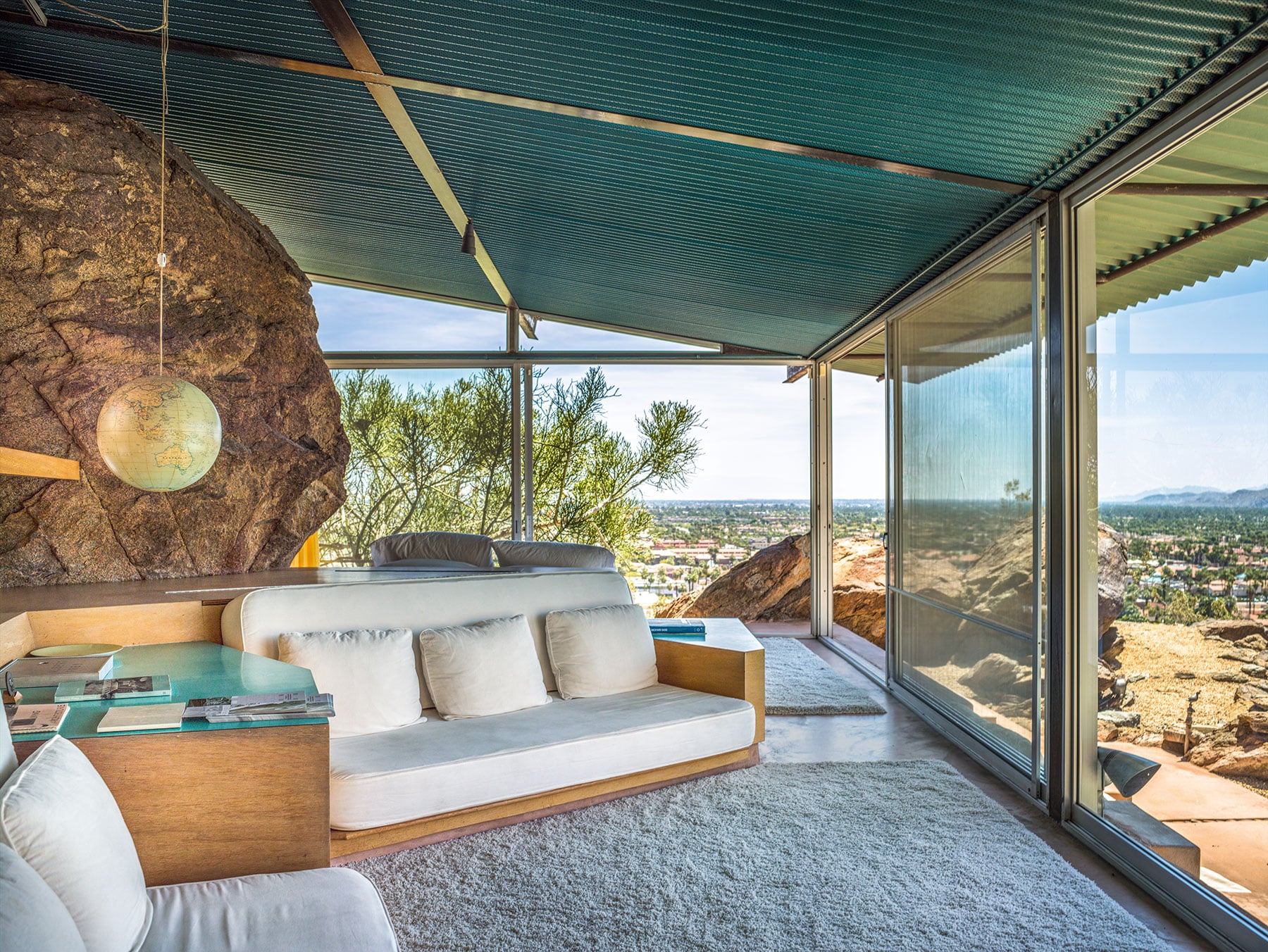 When Karl Lagerfeld, whose loo in Rome is included in the book, was selling all his ancien régime furniture in 2000, reaching for what he called a more “Zen Baroque” interior experience, he told me that the early 20th-century fashion designer Jacques Doucet had inspired his appreciation of interiors as well as fashion. Karl enthused over Doucet’s modern approach to interiors, color and pattern, and the many triumphs he achieved at his home, including having been an early patron of Eileen Gray, whose work he saw in 1913 at the Salon des artistes décorateurs. Rather remarkably, I thought, given how long ago this was, we were able to find a good-quality image of Doucet’s Paris apartment designed by Gray. 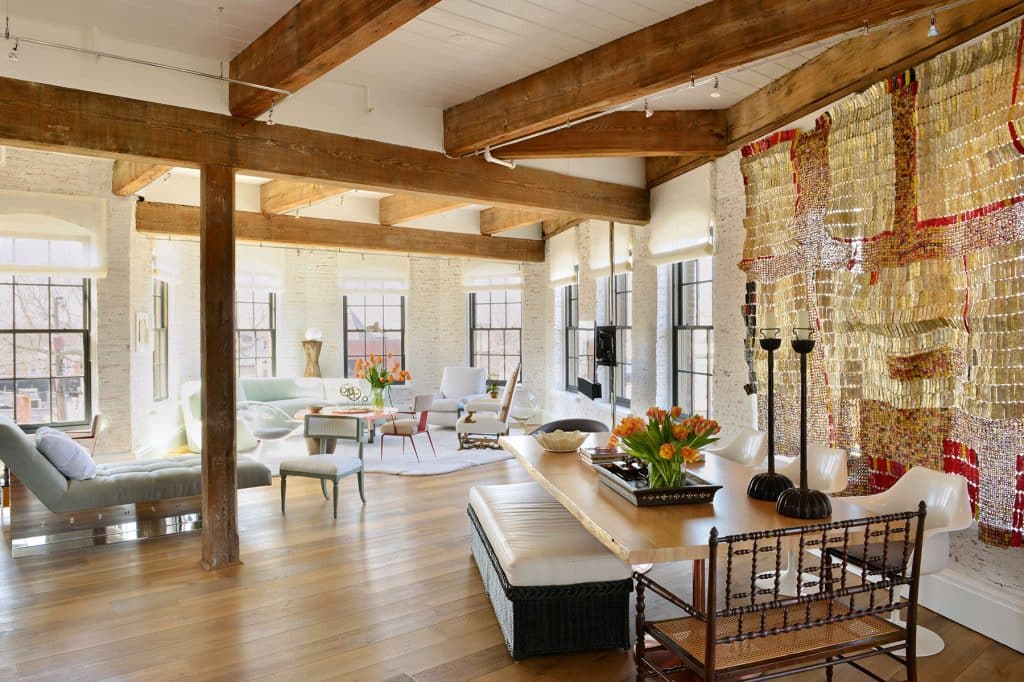 This loft in a former watch factory in Sag Harbor, New York, was designed by Vicente Wolf in 2012. He filled it with an eclectic mix of furnishings and pieces he collected on his travels. Photo by Vicente Wolf Associates 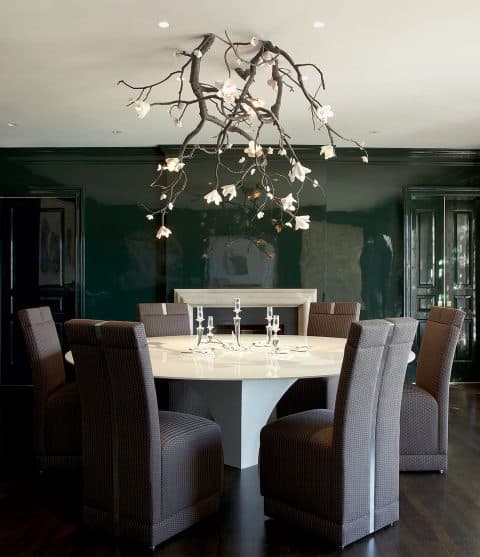 Joe Nahem, of Fox-Nahem Associates, persuaded his collector clients Allison and Warren Kander to commission David Wiseman to create a hanging lamp with white porcelain blossom lights and bronze branches for the dining room of their Greenwich, Connecticut, home, which was completed in 2013. Photo by Fox-Nahem/Peter Murdock

I first heard about Tony Duquette and Hutton Wilkinson’s decoration of the Palazzo Brandoni in Venice for John and Dodie Rosekrans from the writer James Reginato who was fascinated by the project, as so many were once they visited or saw photographs of the place. James’s enthusiasm was, and is, always so enthralling. Several decades after Duquette and Wilkinson completed their work, I was happy to include an image in Interiors of the Rosekranses’ salon, taken by Fernando Bengoechea. The French arts and fashion patroness Joy Henderiks advocated for contemporary European designers of luxe minimalism, including Chahan Minassian, Charles Zana and Dimore Studio — rooms by all three are included in the book. The interior designer and writer David Netto, who contributed an essay for Interiors, is keen on the disruption of colorist decorator Sasha Bikoff, and so we found an image of a dining room in a house in New Jersey that Bikoff decorated in 2016. One always hears decorators talk about projects featuring “Yves Klein blue,” so we included an image taken in the 1960s of Klein’s own living room in the Paris residence he shared with German artist Rotraut Uecker, with the acclaimed iridescent blue showcased in an acrylic cocktail table.