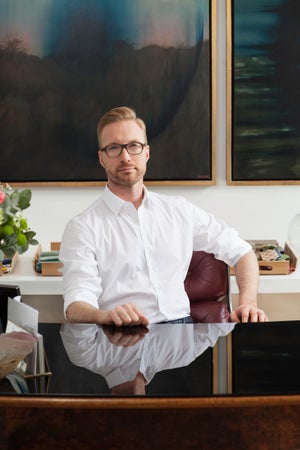 Martin Brudnizki is the founder and principal of Martin Brudnizki Design Studio (MBDS). Born in Stockholm, Martin’s love for design started from a young age. His mother was a stylist and his father a structural engineer; the combination of these elements embedded a deep understanding of aesthetics alongside a grounding in functionality. Having gained a degree in Economics at the University of Stockholm, Martin enrolled at The American University in London to study Interior Architecture where he was deeply inspired by architects and designers Carlo Scarpa, Paul Dupree-Lafon and Dorothy Draper. Following a number of successful positions at renowned interior design firms, Martin established his eponymous Studio in London in 2000 and a New York Studio in 2012.

Martin is listed within Elle Decor A List, Architectural Digest France AD 100, Who’s Who, House and Garden’s Top 100 Leading Interior Designers, London Evening Standard’s Progress 1000, Debrett’s 500 Most Influential People in the UK and Wallpaper* Magazine’s Power 200, with the latter describing him as ‘one of the best restaurant and hotel designers of his generation’.