The Fireplace Is at the Heart of This London Antiques Utopia 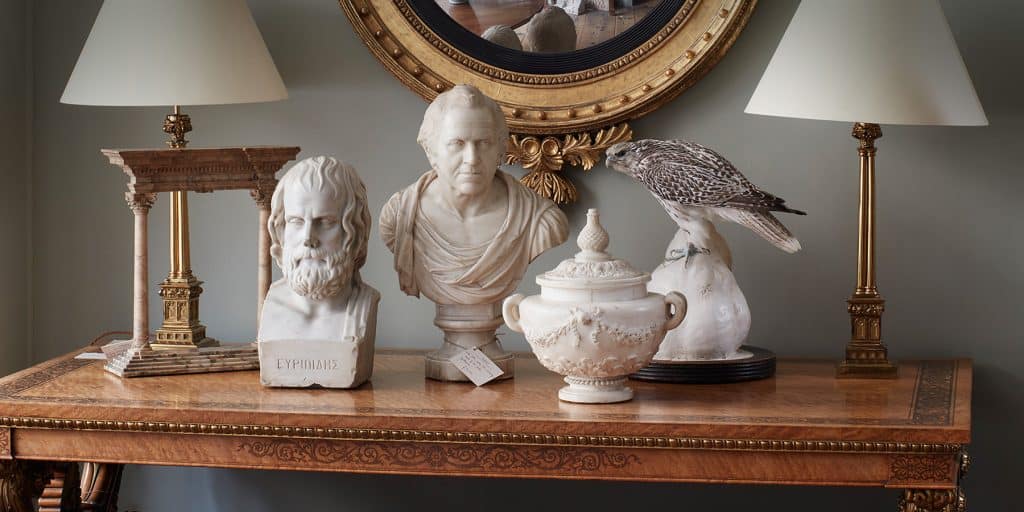 Thanks to the success of his gallery, Jamb, British dealer Will Fisher has become known as a consummate connoisseur and curator of the finest vintage mantelpieces from England, Ireland, France and Italy. 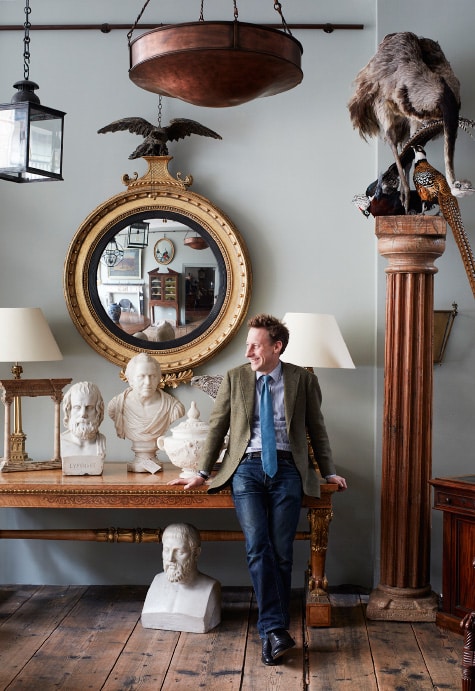 February 26, 2018“I became obsessed with chimneypieces and almost immediately began buying, restoring and selling them,” Will Fisher, founder of the London antiques gallery Jamb, recalls of his childhood passion for mantels. Beside him sits a taxidermied piece from Darwin, Sinke & van Tongeren, and above hang an Apsley dish light and a Benson lantern from Jamb’s collection of reproduction pieces. Top: An early-19th-century marble bust of Euripides sits beside another of an Irish gentleman.

Few antiques dealers can say they found their life’s calling before the age of 10. Will Fisher is one. Now 50, Fisher claims that his passion for mantels — for which his London gallery, Jamb, is rightly famous — began some four decades ago.“When I was eight or nine, a boy named Sam came to my school whose stepfather was Warner Dailey, an American dealer,” he recalls. “They lived in an incredible old house called the Old Knoll in south London’s Blackheath, which I loved to visit because Warner would give Sam and me jobs — such as sanding down pine furniture.”

This was in the late 1970s, and Fisher — whose mother was a headmistress and whose father was an artist — remembers having an epiphany that buying and selling old things could be a way of life. “I became obsessed with chimneypieces and almost immediately began buying, restoring and selling them — with my poor dad helping me heave them around. I must have inhaled an awful lot of lead in the process!”

Looking back, he thinks that the sheer variety of mantels is what enthralled him: “Every antique example is a one-off, made before the use of machinery. Even at such a young age, I was intrigued by the beautiful hand-tooled detailing and the sumptuous colors and intricate figurations of marbles such as Jaspers, Siennas and Breches.”

Today, Fisher’s high level of curation and connoisseurship have made Jamb the go-to destination for interior designers from around the world pursuing the English country house aesthetic. “When I find an object that excites me, it is never about price,” he says. “It is a combination of condition, surface, design, uniqueness and quirkiness. An object does not have to be classically beautiful to harbor enormous beauty.”

That ethos is one Fisher learned at a particularly early age — by 12, he not only was buying and selling mantels but was a dealer at London’s legendary Greenwich Market, running a stall with Sam that he set up with Dailey’s help, “We were selling all sorts of stuff, including ‘old money’ [the currency that preceded the UK’s decimalization in 1971], and people loved the whole theater of buying from us, because we were so young and cheeky.”

By this time, he had made himself known at Christie’s South Kensington, having written to the chairman, Bill Brooks, to request a job. “Bill was an absolute legend, and he invited me to lunch with the board of directors,” Fisher notes. “He said if I were still this keen at sixteen, he would give me a job.” True to his word, Brooks hired him several years later, and he spent three summers working as a Christie’s porter. “There is nothing like handling objects to sharpen your awareness and teach you a sort of visual and tactile language,” he says of the experience. 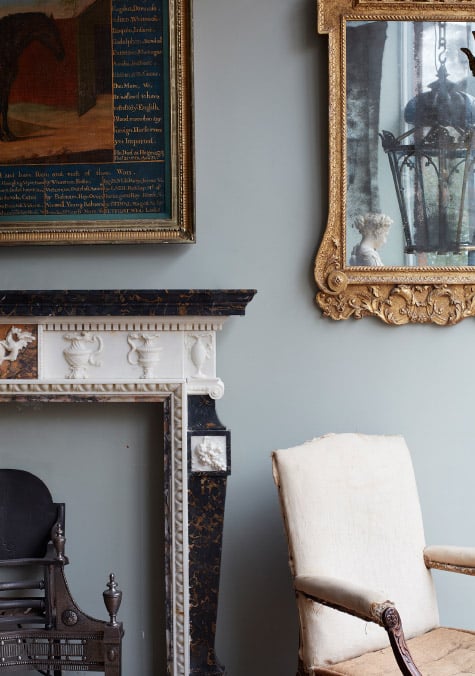 A painting by Daniel Quigley hangs above a rare neo-Palladian George II chimneypiece by William Kent; reflected in the George II mirror is a Regency-style Windsor hanging lantern. 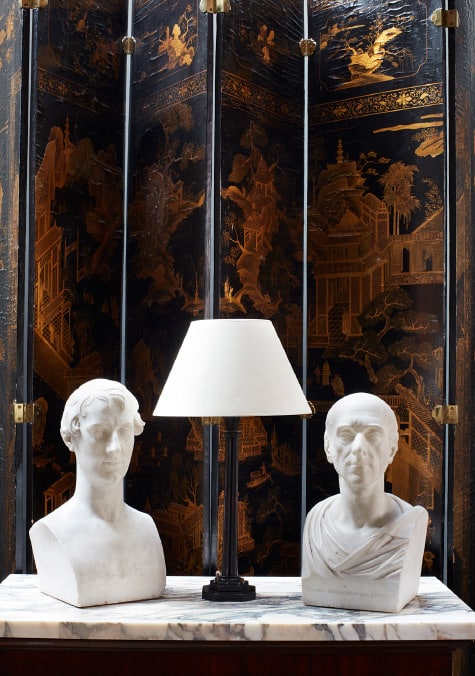 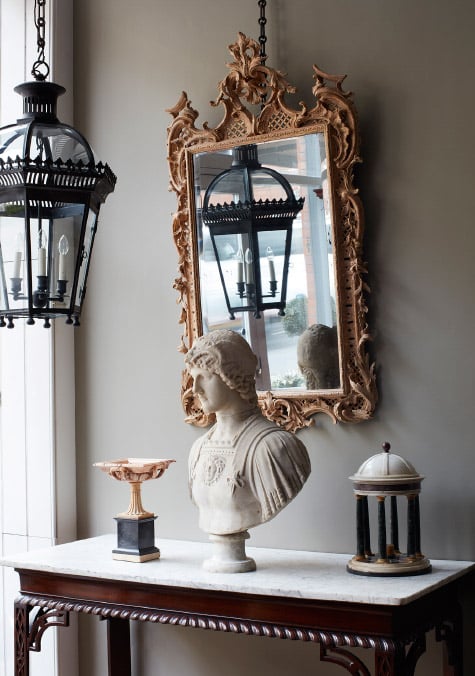 A Roman marble bust of Athena of Albani tops a mahogany George III serving table in front of a George II pier mirror with Rococo scrollwork; the lantern is Jamb’s Wilton model. 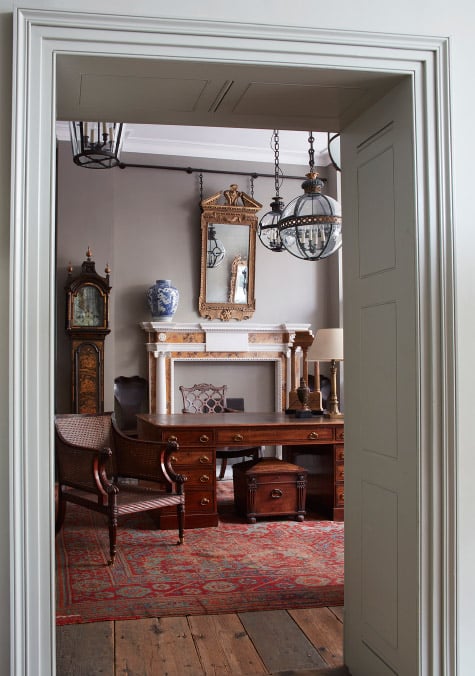 Fisher modeled the Sienna and white marble Derrymore fireplace mantel — also a Jamb reproduction — on Anglo-Irish examples from the middle of the 18th century. To the left of the chimneypiece stands an 18th-century longcase clock with green lacquer and chinoiserie decoration. 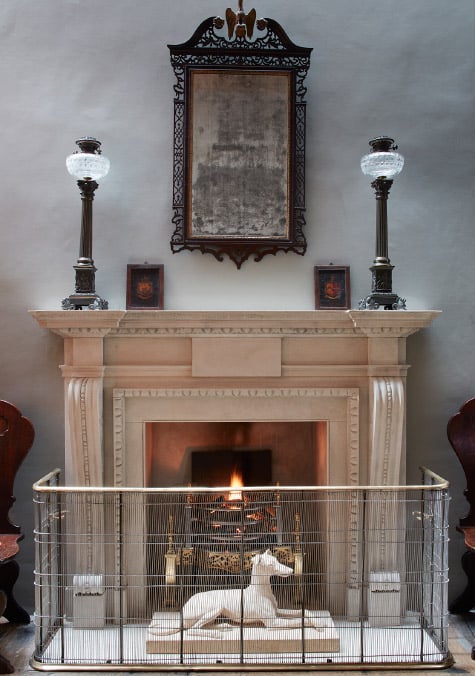 The Chesham reproduction fireplace mantel, carved from distressed Portland stone in an early George III style, features a shell-and-acanthus-leaf carved edge, as well as bead-and-reel and egg-and-dart motifs. The large brass fender in front of the chimneypiece is also from the gallery’s reproduction collection. 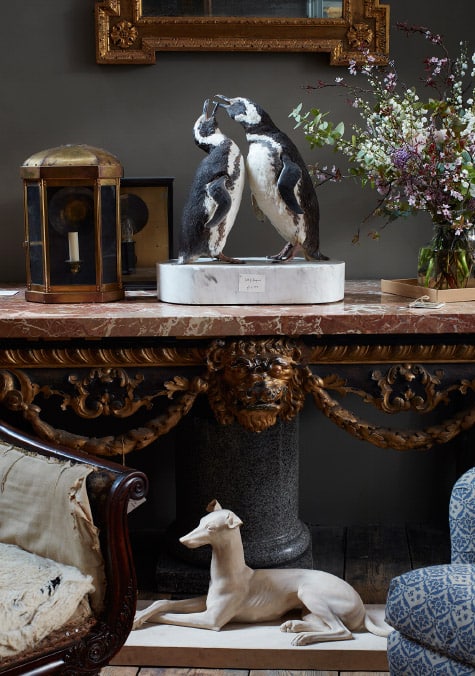 A subsequent brief stint at university to study the history of art was “catastrophic,” Fisher recalls, owing to his dyslexia and short attention span. Instead of returning to college, he became a forklift driver for an antiques dealer in Bermondsey. “As part of the deal, they gave me a small space, rent free, from which I could buy and sell. It was an amazing gift to not have any overhead.”

Soon, he also became a runner for various London antiques dealers, including Christopher Hodsoll, Christopher Gibbs and David Humphrey, of Humphrey-Carrasco, many of whom became his mentors. The idea of having his own shop didn’t enter his head until the multi-dealer antiques emporium Core One, which is now defunct, opened on the King’s Road in 2001. “I had been exhibiting at the Decorative Antiques & Textiles Fair in Battersea and overheard a group of dealers talking about a new collective space,” he recalls. “They mentioned one of the proposed dealers had dropped out, then looked over their shoulders, and there I was. It was a case of ‘He’ll do!’ But I jumped at the chance. Most of us were in our early thirties and dreaming of creating our own antiques utopia!”

In 2003, he was joined in this venture by his future wife, Charlotte Freemantle. “That was a game changer,” says Fisher. “We shared the same aesthetic vision, while filling the gaps in each other’s skill set — Charlotte focused on the marketing and all things client-facing, leaving me to focus on buying stock and designing the Jamb collection.” The latter is the arm of the business that specializes in reproductions, notably the globe pendant lights that have become their signature along with stone and marble mantels. Five years later, the business had grown sufficiently to move out of the shared Core One space and into Gibbs’s old showroom in Pimlico. 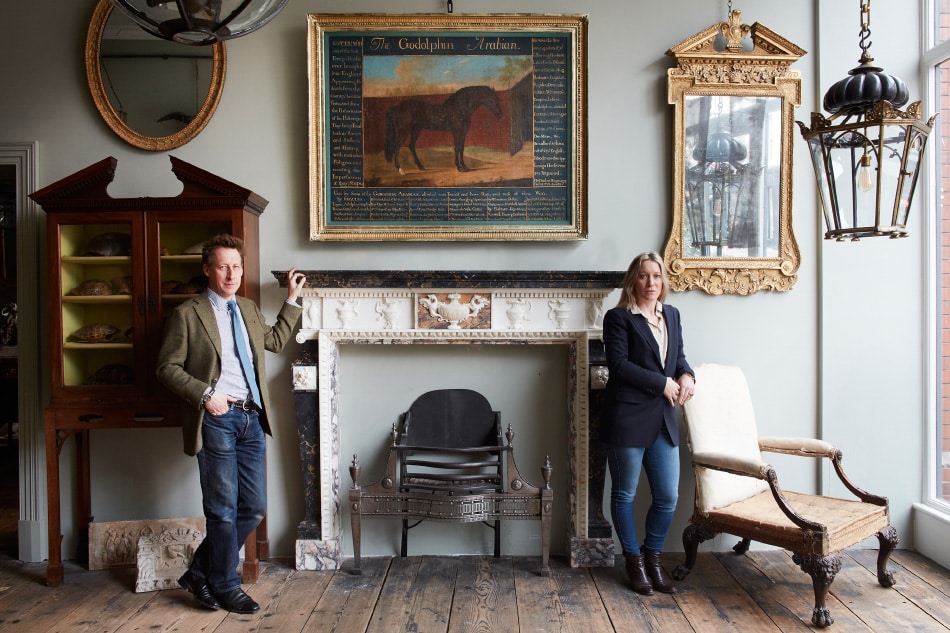 Fisher has run Jamb with his wife, Charlotte Freemantle, since 2003 — before they were married. “We shared the same aesthetic vision, while filling the gaps in each other’s skill set,” he says. “Charlotte focused on the marketing and all things client-facing, leaving me to focus on buying stock and designing the Jamb collection.”

The catalyst that truly elevated Jamb to its current stature was the 2012 Christie’s sale “The Collection of Will Fisher: Founder of Jamb.” It included more than 50 of the finest antique English chimneypieces, including a George II verde antico and statuary marble mantel attributed to Isaac Ware, which sold for more than £180,000 — about £100,000 over the estimate. The whole sale realized more than £3.9 million, against the pre-sale estimate of £1.4 million to £2.4 million.

“When I find an object that excites me, it is never about price,” says Jamb founder Will Fisher. “It is a combination of condition, surface, design, uniqueness and quirkiness.” 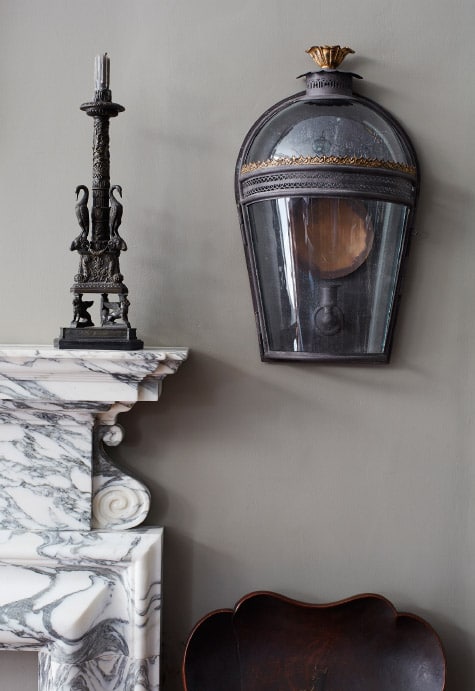 The profits allowed Fisher to move to his current premises, a double-fronted shop on the Pimlico Road that today is filled with a wonderful array not only of vintage chimneypieces but also of beautifully executed reproductions of antique fireplaces and lighting. These sit alongside Jamb’s wittily curated assortment of antiques and eccentricities, including Michael S. Smith fabrics and extravagant taxidermy compositions by 1stdibs dealer Darwin, Sinke & van Tongeren.

His inclusion of reproduction pieces makes perfect sense to Fisher. “It seems a travesty to have one unique and rare thing, let it pass through our hands and then never have it again,” he explains. The fact that he and his artisans have seen and touched the real thing allows them to make better reproductions. “Once you have the authentic item in your hands, as opposed to a drawing, you can ensure the ultimate level of detailing is achieved when you copy it,” he says. That also makes it easier to have original items re-created in bespoke sizes for particular clients in particular locations. This facet of the business introduces a level of affordability, too. While an antique chimneypiece is likely to cost upwards of £30,000, a Jamb reproduction comes in at about a quarter of the price.

Jamb’s core business, however, is still driven by Fisher’s relentless drive in tracking down fine 17th-, 18th- and 19th-century chimneypieces from England and Ireland. He offers ones from France and Italy, as well — “but only if they are more pleasing, considered and arresting than the usual” examples from those two countries, he says.

He confides that he would rather be a buyer than a seller. “I am addicted to the thrill of the chase,” he confesses, “those moments where you can’t believe you have bought something so wonderful and almost can’t bear the fact you have to sell it, but feel so fortunate that it has at least passed through your hands.” His acquisitive streak is much in evidence in his and Charlotte’s Georgian townhouse in southeast London, which, she argues, has been filled to the point of overflowing.

When asked whether their children — Eliza, age 11, and Monty, 8 — share the youthful passion he turned into a profession, he laughs. “My daughter is desperate to have her room revamped,” he says, “but she wants to get rid of every trace of the antique. If it were down to her, she would have white fitted carpets throughout.”

Will Fisher shares his thoughts on a few choice pieces. 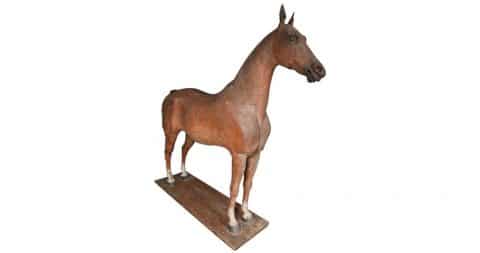 “Antique dealing for me is all about surface. This horse — which is extraordinary in the quality of its execution — still has its original dry, untouched paint.” 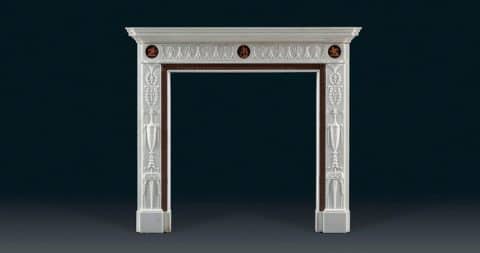 “I bought this mantel, which once belonged to Lord Heseltine, before a visit to Pompeii. When you put this chimneypiece in the context of the Roman discoveries that influenced its creation, it really comes to life. It would have been extraordinarily chic in the 1770s, and that still holds true today.” 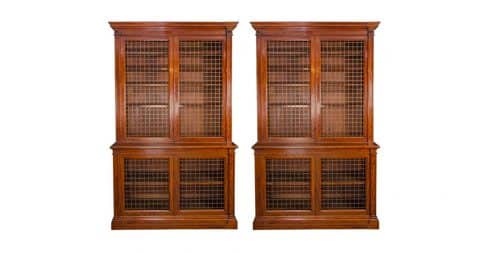 “The quality of timber in this architectural pair of William IV bookcases is outstanding, and a notable sign of their overall quality is the fact that they are finished on their sides as well as their front facades. I love the bronzed grills, which would look appropriate on any building in Rome.” 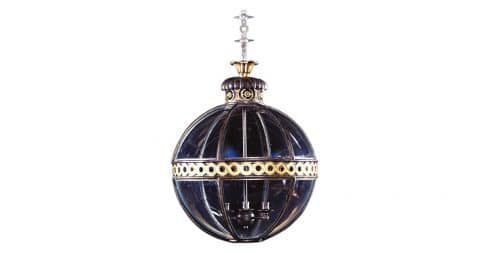 “The first globe we ever created, this piece dates back more than fifteen years. I believe it is still as relevant today as it was then, and in both its small and large sizes.” 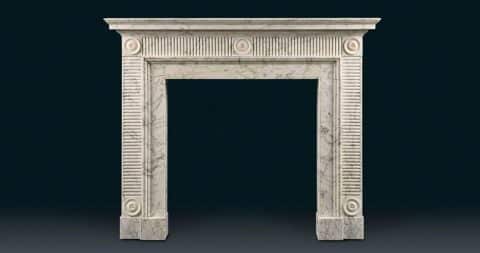 “Pure in design, this groundbreaking 18th-century mantel is classical and yet strikingly modern in its design.” 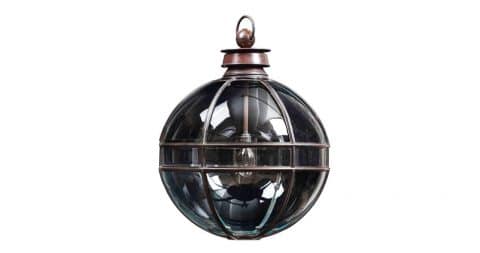 “Designed by me, this globe lantern is intended to transcend the classic into the modern world”