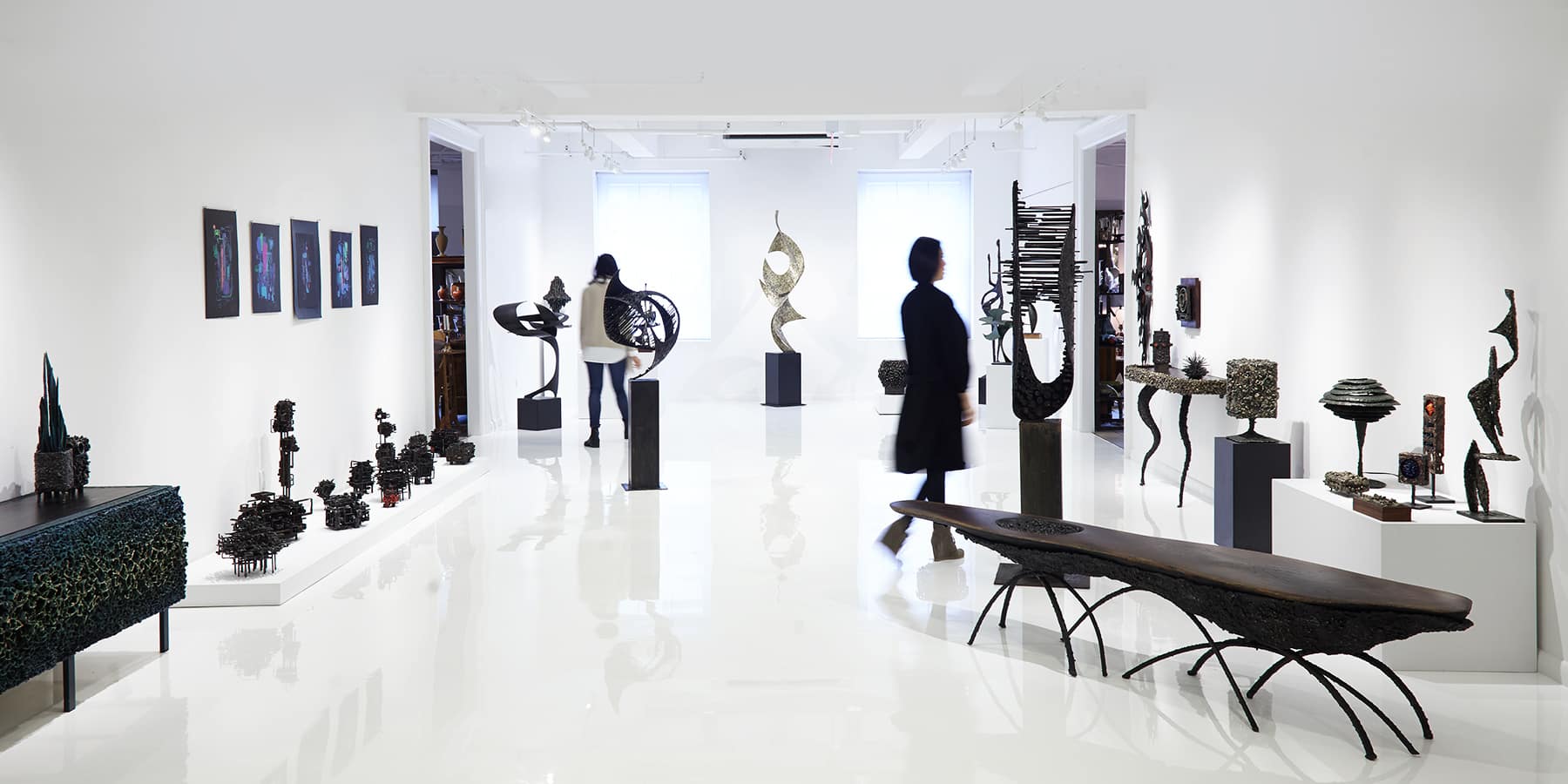 The Iowa artist’s transformative Brutalist sculptures, as well as his furniture and paintings, are on display in a New York show. 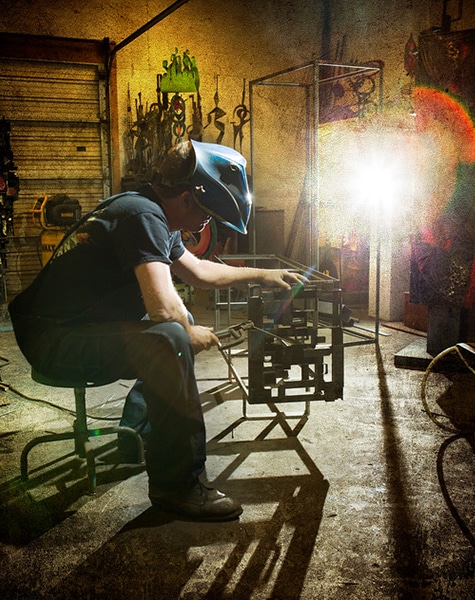 James Bearden uses his welding torch on a “Cathedral” series cabinet in his Des Moines, Iowa, studio. (Portrait by Tharren Keith) Top: Bearden’s exhibit, currently on display at the 1stdibs Gallery in the New York Design Center, including one of his new pieces, Ant (Bench), 2016, pictured in the foreground on the right.

Steel and bronze occasional tables enveloped with tubular spore-like forms; a cabinet covered with a lattice of pitted steel, bronze and orange enamel; a secret trinket box resembling allium turned to metal — if James Anthony Bearden’s craggy, roughly textured metalwork has a compellingly graphic appeal, it may be in part because of his background: He was an award-winning art director for a large advertising agency for 17 years before giving up his pencil for the welding torch. “I always had my hand in art, but as a painter — not a welder,” says Bearden, noting that he has degrees in both fine art and visual communication from Grand View University, in Des Moines, Iowa, the city he continues to call home.

Painting, however, took a back seat to welding the moment Bearden tried working with metal, in the early 2000s. “I loved the fact that you could do something so solid and stable — it’s everlasting — and that it has such a strong three-dimensional quality,” he says. “I was really getting into it, and my interest in graphic design was starting to drift away.” When the financial crisis of 2007 hit, it was something of a mixed blessing: The advertising agency lost many of its clients, but it was also just the push Bearden needed to pack it in and focus exclusively on his art. After he left the firm, “I worked really hard to find my voice, using some guidance from the masters,” says Bearden, noting that he studied such artists as Pablo Picasso, Louise Nevelson, Alexander Calder and Harry Bertoia. “I read and looked at everything and absorbed all that I could.” 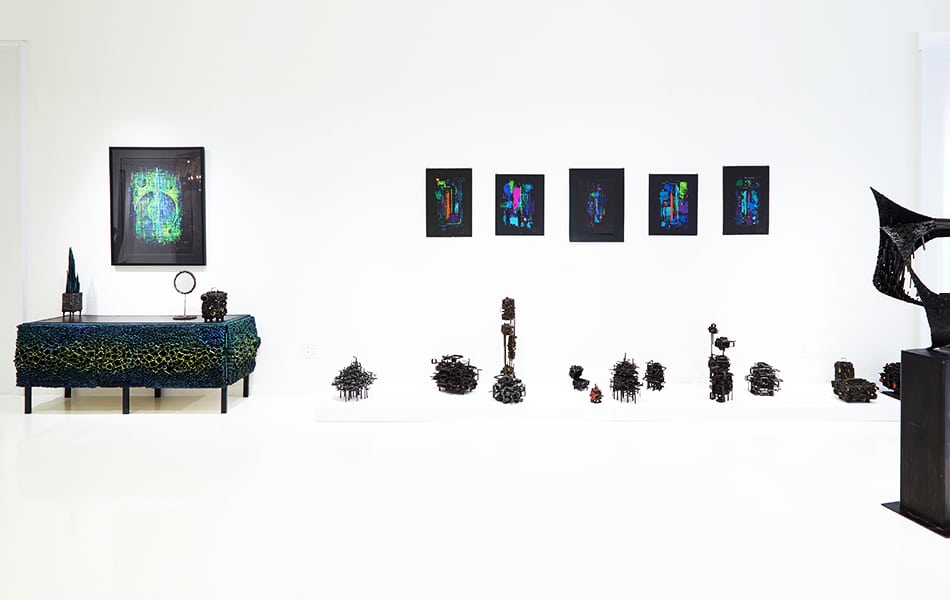 Bearden’s 5 Moons hangs over his Serpentine Cabinet in the exhibition. At right, five untitled paintings hang above a collection of his small sculptures. 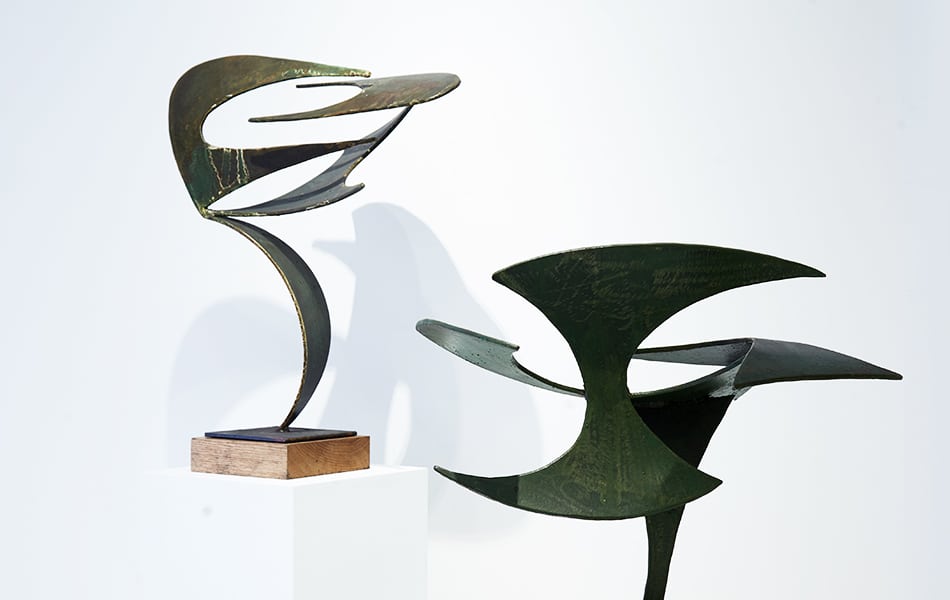 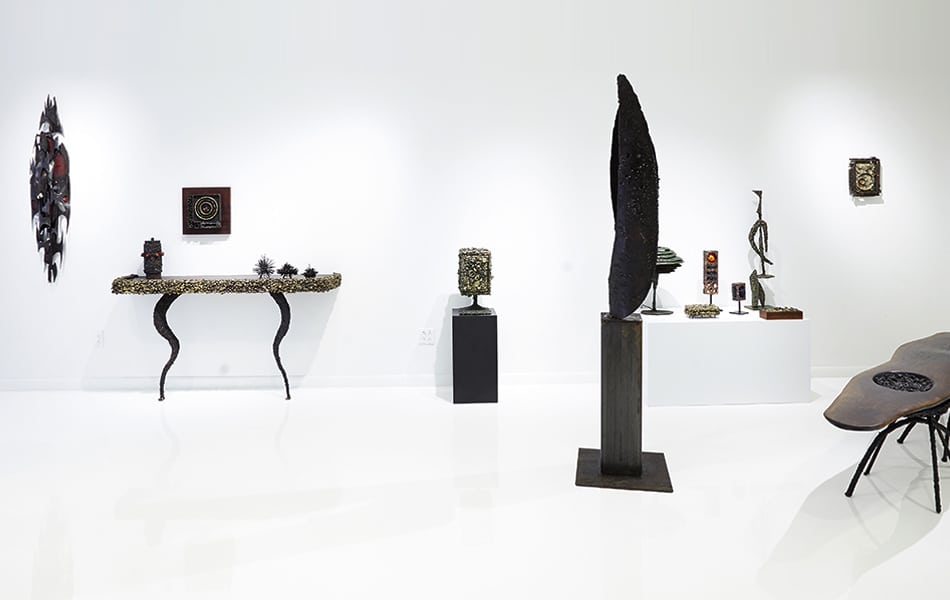 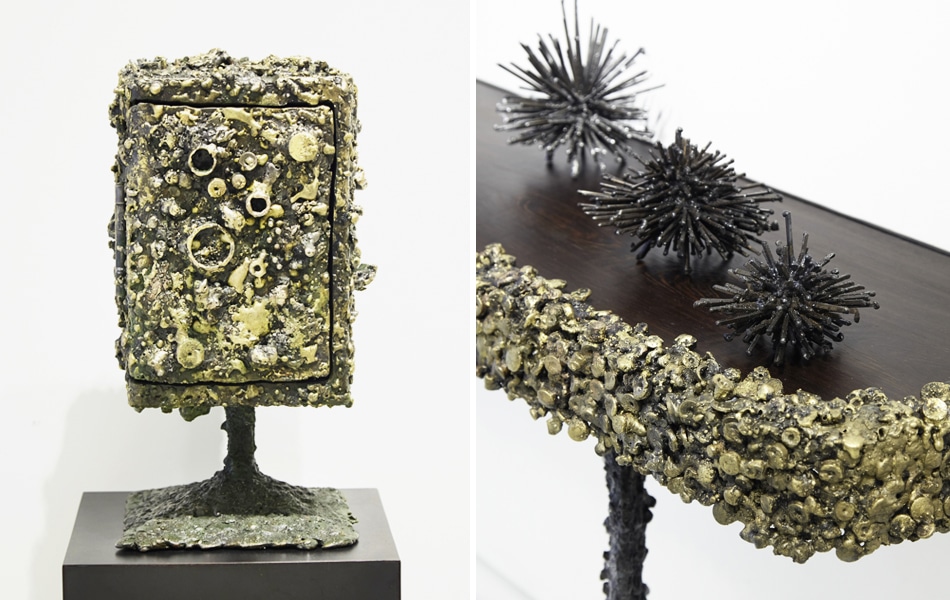 Left: Moon Box, 2016, is made of blackened and patinated steel and fused bronze. Right: Orbital Harry Boxes, 2016, are displayed on top of the Barnacle Shelf, 2016.

Pod Box on Stand, 2016, is a patinated-steel and fused-bronze piece with a hinged top.

Those 20th-century modernist influences are readily apparent in Bearden’s work, says Jad Attal, the senior design specialist at Rago Arts and Auctions, in Lambertville, New Jersey, which has been a significant promoter of Bearden’s work since it began auctioning some of his pieces in 2013. “He’s channeling some of the vocabulary of the greats and drawing from their palettes and forms, but making them his own,” says Attal, who provided guidance to Bearden as the artist began branching out from sculpture into functional objects. “He’s picking up on that design continuum but has created his own universe.”

Bearden’s universe has never been so comprehensively presented as it is in “James Bearden: Life in Steel,” an extensive exhibition of the artist’s work at the 1stdibs Gallery on the 10th floor of the New York Design Center, in Manhattan, running through February 28. Curated by Larry Weinberg, owner of Weinberg Modern, the show presents more than 50 of Bearden’s creations, including sculpture, furniture, tabletop objects, paintings and drawings. About half of the pieces were created specifically for the exhibition, including an 8-foot-long bench with spidery legs and a hole in its walnut top where blackened steel seems to have bubbled up like lava; a container called a Moon Box, with a dramatically cratered, lunar-inspired surface; and sculptures of human figures made from simple assembled forms. The remainder of the work comes from Weinberg’s collection, which he has amassed since discovering Bearden’s work at Rago. 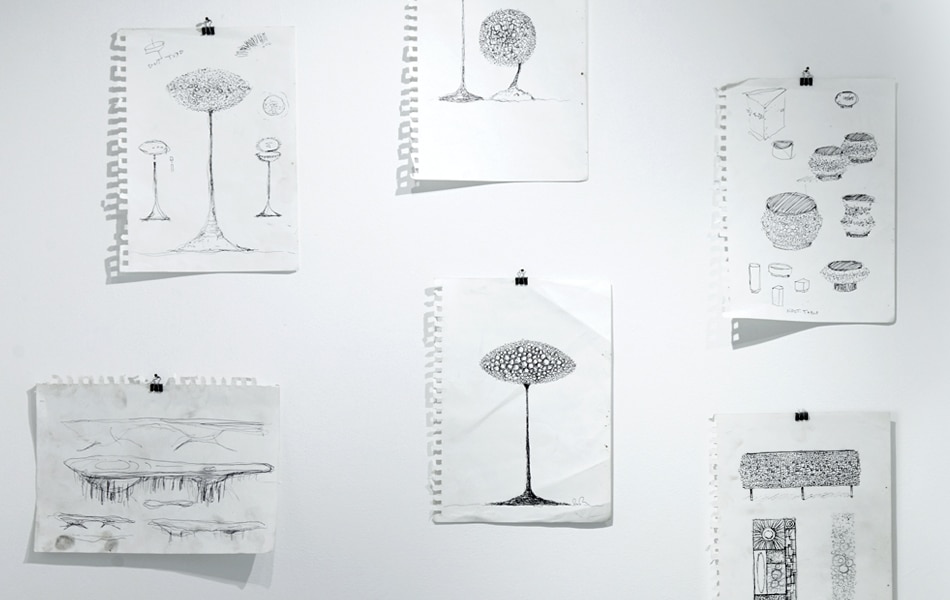 Hanging on the wall of the gallery are draft drawings of some of the pieces in the show, including Ant (Bench), Pod Box on Stand, Spore Table(s) and Serpentine Cabinet. 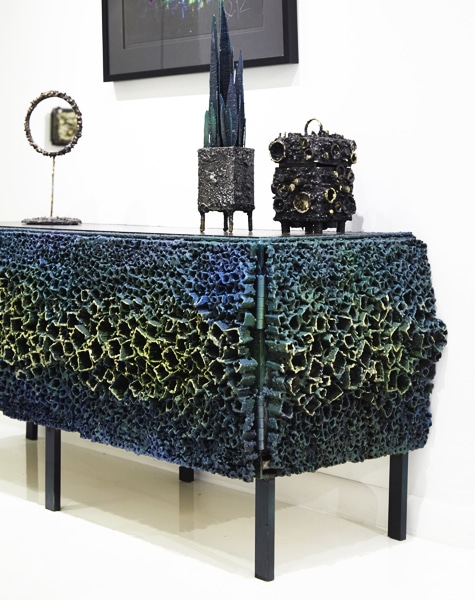 Serpentine Cabinet, 2016, is made from aquatic-finished steel and bronze with a stained sapele top. Bearden’s Organica Mirror, 2015, Vessel with Plant, “Cathedral” series, 2016, and Dwelling Box with Round Elements, 2013, are displayed on top of the cabinet.

“Bearden is channeling some of the vocabulary of the greats and drawing from their palettes and forms, but he’s making them his own.”

“They’re all handmade pieces, similar to what came out of Paul Evans’s studio,” says Weinberg, comparing Bearden to one of the most revered designers of the last century working primarily in metal, who died in 1987. “There’s room for a modernist blacksmith artist in America. And James is that guy who puts the mask down and works steel all day long.”

In just a few years, a number of other galleries have become enamored of Bearden’s creations and started selling his work, including Lowy and Studio Van den Akker in New York; and Pegboard Modern, in Chicago. Nevertheless, every piece is still painstakingly made by Bearden’s own hands, and no two are alike. “There are different flows to my work,” says Bearden. “One may be cut out of pieces, and another may be lots of lines,” but there’s always a shared primal power. “It’s this blackened Brutalist look that I try to get at,” he adds.

For a growing legion of collectors and fans, however, Bearden’s work transcends the raw physicality of its making and defies easy categorization. “There’s an otherworldliness to his pieces,” says Attal. “To me, they seem cosmically inspired.”