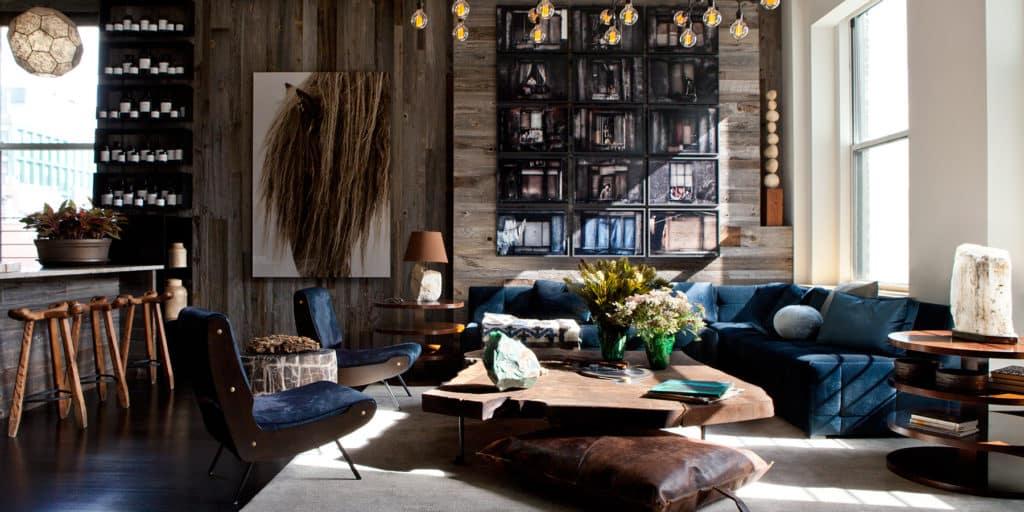 The designer is a master of mixing old and new, vintage and custom to create interiors that are wholly authentic. 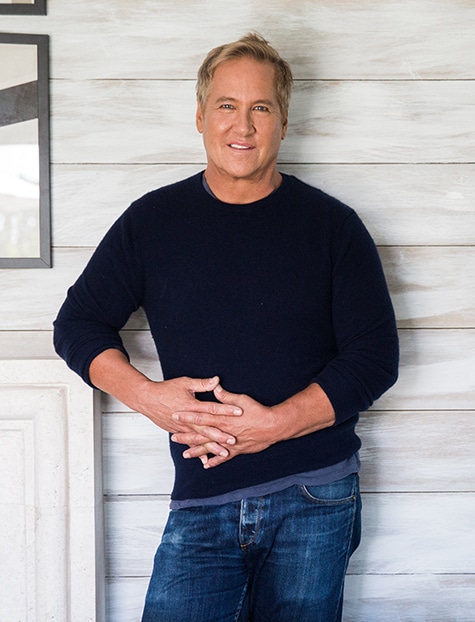 July 10, 2017After more than 30 years in the interior design business, James Huniford continues to challenge himself with new projects and a growing furniture line (portrait by Ryan Moore). Top: For the living room of this penthouse on New York’s Bond Street, Huniford created a custom sofa and paired it with Gianfranco Frattini lounge chairs and a live-edge coffee table with built-in turntable by BDDW (photo by Nick Johnson).

Looking back on his three-plus decades as an interior designer, James Huniford succinctly describes the secret of his success: “I had no preconceived ideas, because I was self-taught.” His curiosity and constant search for ways to integrate the old and the new — whether in interiors, furniture or found objects — has produced an impressive body of work that includes comfortable retreats from Long Island, New York, to Marin County, California, as well as sleek Manhattan apartments, to name just a few of his many projects.

Huniford, who is better known as Ford, was born in Syracuse, New York, and grew up in an agricultural area. His parents had a cabin on the St. Lawrence River, and he became fascinated by the idea of design when visiting some of the grand summer houses of the Thousand Islands — studying the stenciled burlap walls of one mansion’s entrance hall and the detailing of the fabric cushion covers on the wood-and-brass boats that ferried people between islands.

In search of adventure and opportunity, Huniford left home at 17, heading first to New York, then to Los Angeles and making several trips to Europe in his early 20s that he financed by waiting on tables back in Manhattan. He was especially taken with the modern architecture and industrial materials of the Maison de Verre in Paris, the Greek-influenced Villa Kérylos in the south of France, Karl Friedrich Schinkel’s architecture in Germany and the Baroque buildings of Rome. 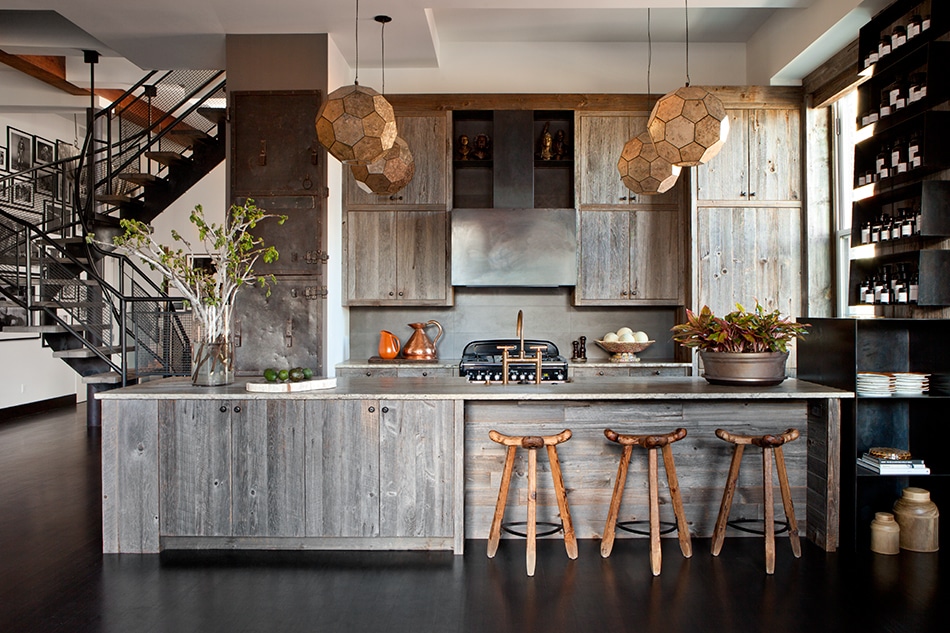 Custom mica pendants hang over the kitchen of the Bond Street penthouse, which features reclaimed-barn-wood cabinets. The closet doors are iron shutters from a loft in Tribeca. Photo by Nick Johnson 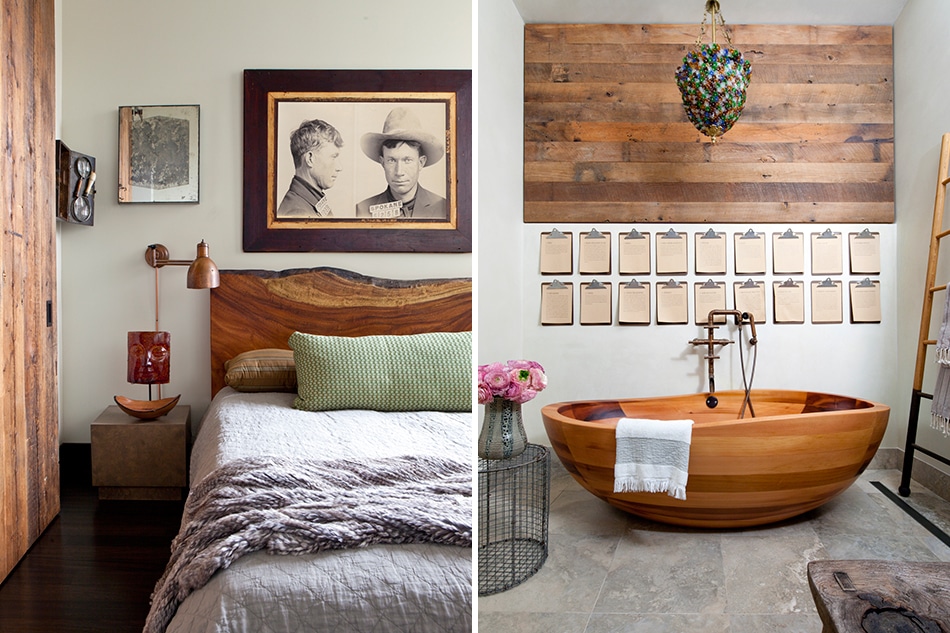 Left: A vintage mug shot hangs above the live-edge headboard in this bedroom. Right: The bathroom features a custom carved-cedar tub by E-legno and clipboards with healthy living affirmations. Photos by Nick Johnson 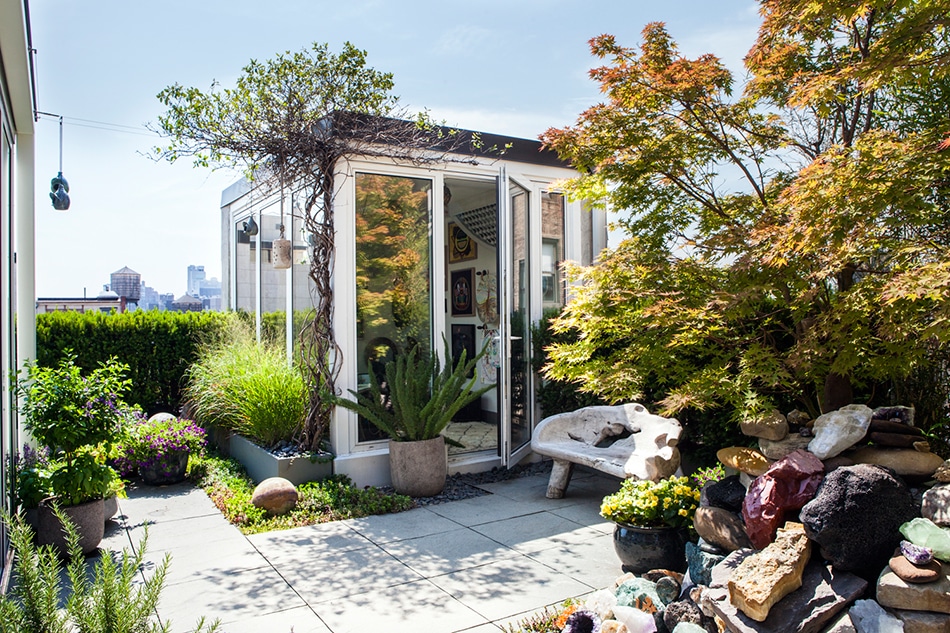 The lush rooftop’s landscape design is by James Huniford and Roger Miller. Photo by Nick Johnson 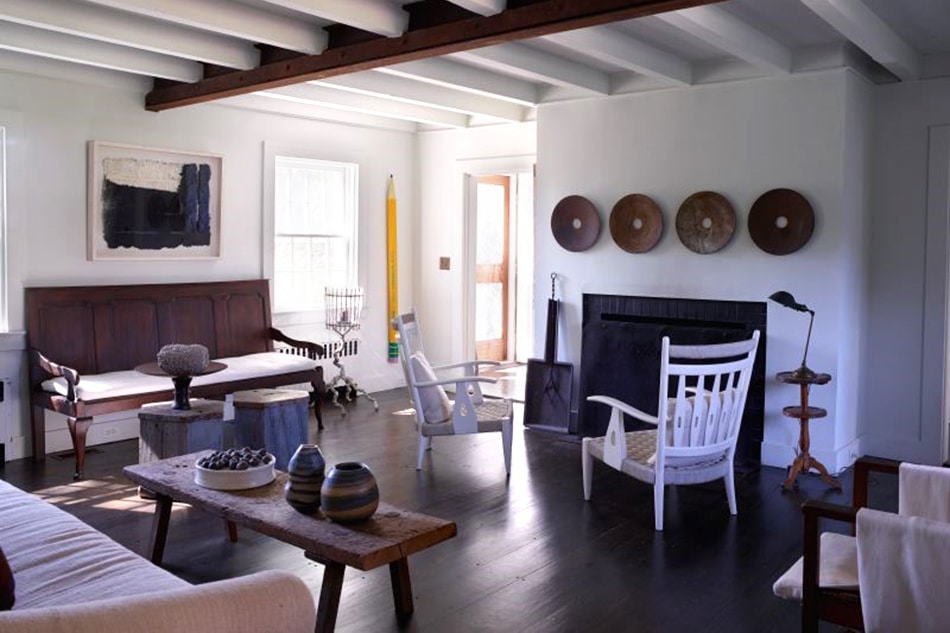 In the living room of Huniford’s 1865 saltbox farmhouse in Bridgehampton, New York, he repurposed industrial discs from farm equipment as artwork above the fireplace. The space also includes whitewashed mid-century Italian armchairs and antique painter’s stools. Photo by Richard Powers 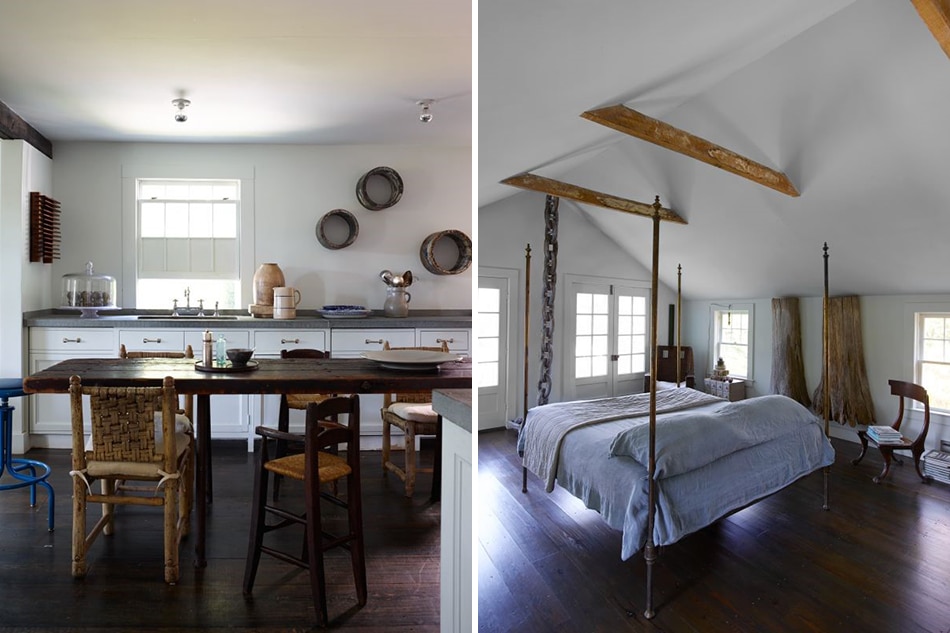 Left: The kitchen has bluestone countertops and contains a farm table surrounded by mismatched chairs. Right: A wooden boat chain from the San Juan Islands hangs from the ceiling next to the 19th–century Italian brass bed. The 18th-century Klismos chair is from the collection of Bill Blass. Photos by Richard Powers 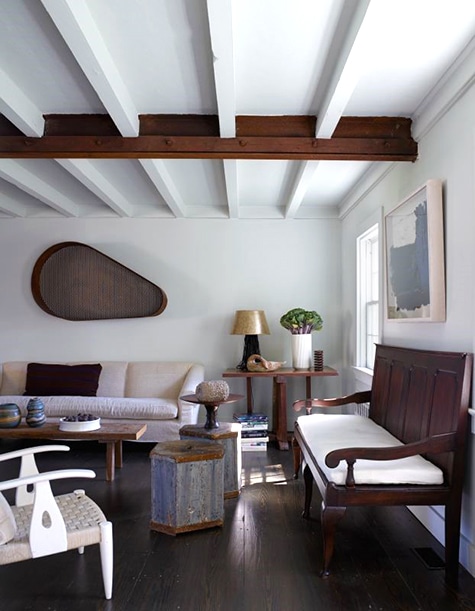 The living room of Huniford’s Bridgehampton, New York, home features a linen sofa of his design and an English 18th-century settee, along with reclaimed pine floors. Hanging above the sofa is a repurposed tractor belt cover, and on the right is a mixed-media work by Ingrid Pitzer. Photo by Richard Powers

Huniford’s sensibility was further refined by his partnership of more than 20 years with the designer Stephen Sills, which began in the 1980s and quickly grew to include glamorous homes for star clients like Tina Turner and Vera Wang. Huniford, who started out with little experience, became increasingly involved with the design of the duo’s ultra-chic interiors.

With the beginning of the new century, Huniford moved on to a new phase in his life and his career. The first of his two children was born in 2006, and he officially established his own design practice in 2008. He bought an 1865 farmhouse in Bridgehampton, New York, which, he says, became “a laboratory for me to do things with my vision and references and which set the tone of my career.” Here, Huniford mixed English furniture and art by Donald Judd and Robert Rauschenberg with a 12-foot-long rusted metal sign from a WPA-era truck. He hung a huge wooden chain from Washington State’s San Juan Islands from the ceiling “like sculpture. I created tension in space,” he explains. He also painted the rooms a color he once described as “foggy summer squall,” a white that reveals subtle green and blue tones as the light changes.

Huniford used a similar color strategy in the house he designed (with the Southampton architect James McChesney) for the theater director Walter Bobbie and his husband, the Metropolitan Opera tenor David Frye, a childhood friend of Huniford’s. Inside the home (the architecture of which was inspired by the potato barns once prevalent in the area), Huniford painted the walls, ceiling and trim of every room the same pale “subtle celadon blue,” to establish what he calls “a modern sensibility of calm.” All the floors are of wide-plank reclaimed wood. “They don’t look perfect,” he explains. Huniford says that his work explores “how things reveal themselves slowly — which is how I see life and the creative process.” 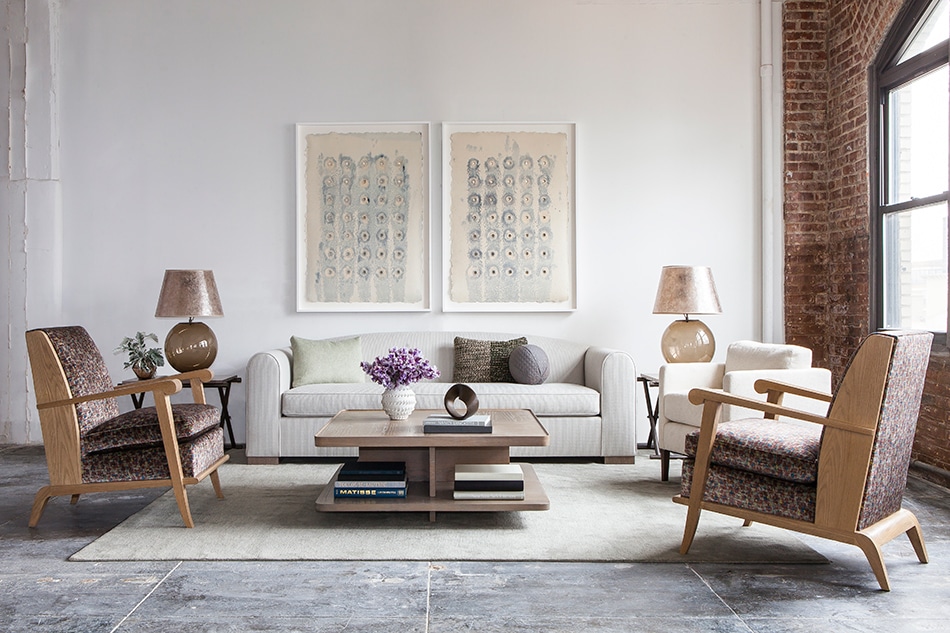 At the Huniford Studio Collection showroom in Manhattan’s West Chelsea neighborhood, furniture from the Huniford Collection and accessories from Huniford Vintage are on display. Hanging above the sofa are White Rims #1 and White Rims #2 by Harmony Hammond. Photo courtesy of Huniford Design Studio 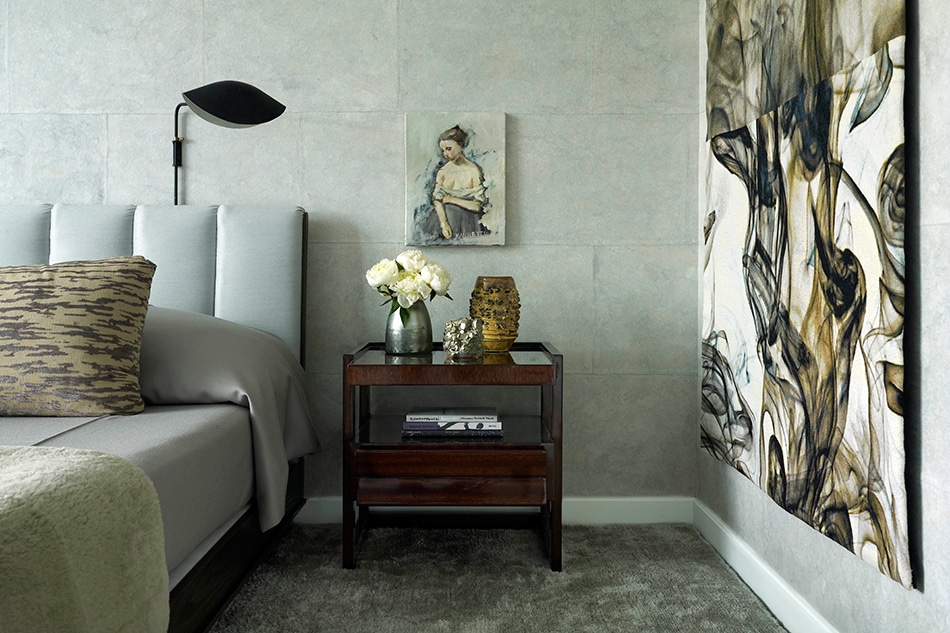 The custom bedding in this West Village master bedroom is by Huniford Collection. The Serge Mouille sconce is from Rewire and the mid-century mahogany bedside table by Paul Laszlo is from Dual. Photo by Joshua McHugh 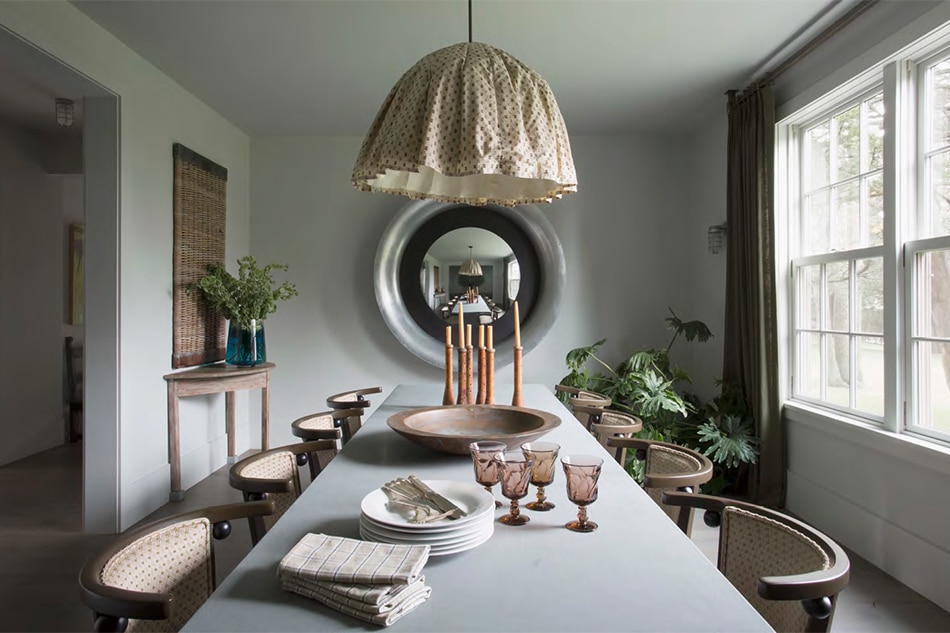 In this Watermill, New York, dining room, Huniford designed the custom bluestone dining table, which is surrounded by Vienna Secession–era chairs by Joseph Hoffmann. The mirror is a repurposed airplane element. Photo by Robyn Lea 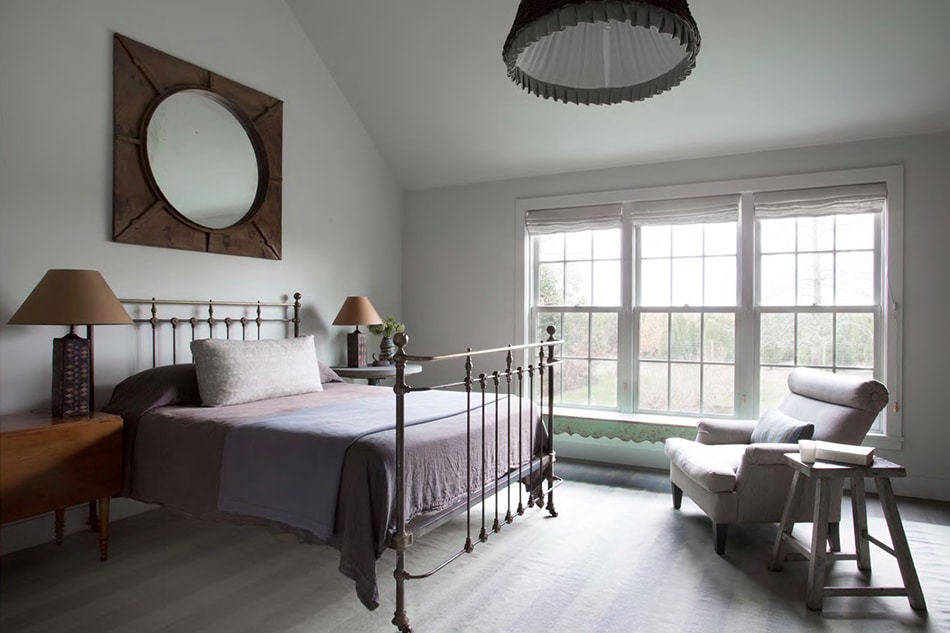 A guest bedroom includes a 19th-century American brass bed and a Huniford Collection chair on a cotton rug by Elizabeth Eakins. Photo by Robyn Lea 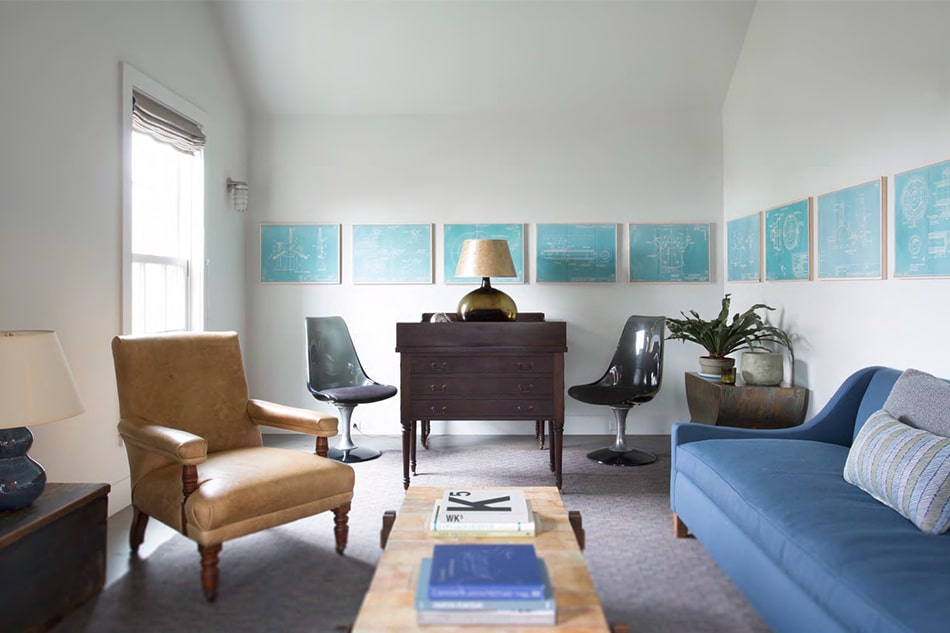 The den includes a Huniford Collection sofa and a tile-top table by Roger Capron. The 19th-century partner’s desk is paired with mid-century smoked Lucite tulip chairs. The patinated-metal side table is from R.E Steele Antiques. Photo by Robyn Lea 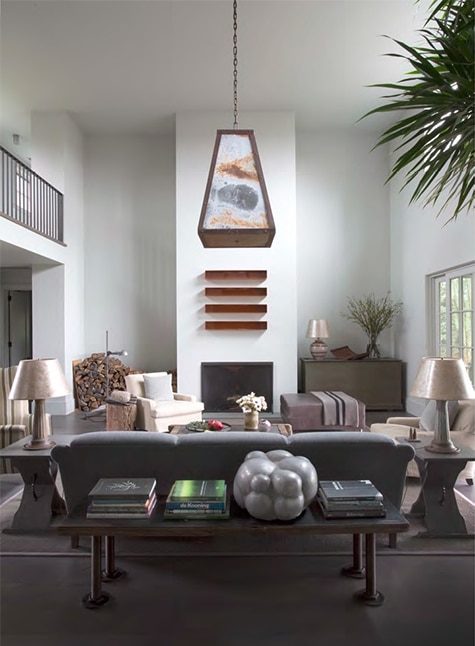 Huniford Design Studio and architect James McChesney collaborated on the double-height living room of this Water Mill, New York, home. Huniford designed the sculpture above the fireplace, as well as the sofa, chairs and ottoman. The pendant is a galvanized-metal farming object repurposed as a light fixture. The bulbous steel sculpture on the table in the foreground is from Andrew Spindler Antiques. Photo by Robyn Lea

Huniford’s interiors skillfully mix old furniture with new (often of his own design), refined and rough materials and art of many styles and eras. In a glamorous Greenwich Village apartment for Catherine Montgomery, a tech entrepreneur, he installed a projection by the contemporary artist Jennifer Steinkamp next to a Vienna Secession chair. For the living room of a vacation house on Martha’s Vineyard, he had leaves and ferns found on the 50-acre property pressed into wallpaper and turned a group of 50 found wooden spools into a sculpture in the dining room.

His current projects include a downtown Manhattan triplex penthouse for a bachelor in his 30s done in a palette of deep greens, rustic grays and smoky blues — “colors I haven’t worked with in a long time,” Huniford says — and outfitted with a freestanding fireplace and custom silk-and-linen carpets from Beauvais. Another apartment nearby, also for a bachelor client, includes a custom-made copper-colored resin bar and a sofa that swings from the living room ceiling. “We’re having fun,” Huniford says of the variety of interiors he and his office are designing. He has also just added 30 new pieces to his Huniford Collection of what he refers to as “tailored, customizable” furniture, which is made by hand in New York.

As if his business ventures weren’t enough, Huniford is also the founding chair of Design on a Dime, the yearly designer-vignette sale that benefits Housing Works, which provides housing and medical and job services to people living with AIDS and HIV. He recently presided over this year’s event and its fifth annual Groundbreaker Awards, honoring the journalist Tamron Hall and John Demsey, the executive group president of the Estée Lauder Companies.

When asked if he has a wish list for the future, Huniford replies, “The future is right now. I feel fortunate and grateful to be working for the clients I have.” But should he find himself with a little free time, Huniford would love to learn welding and take pottery classes, simply for the pleasure of  making something. As he puts it, “I like the idea of being in the moment.” 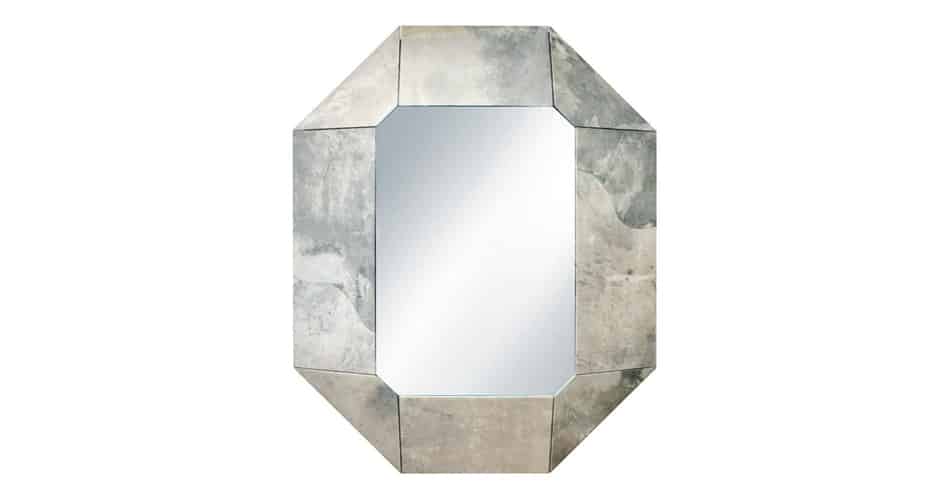 “This sculptural mirror is unique because of the large scale and wide, deep frame. A mirror of this size always makes an impact, and you can really appreciate the material.” 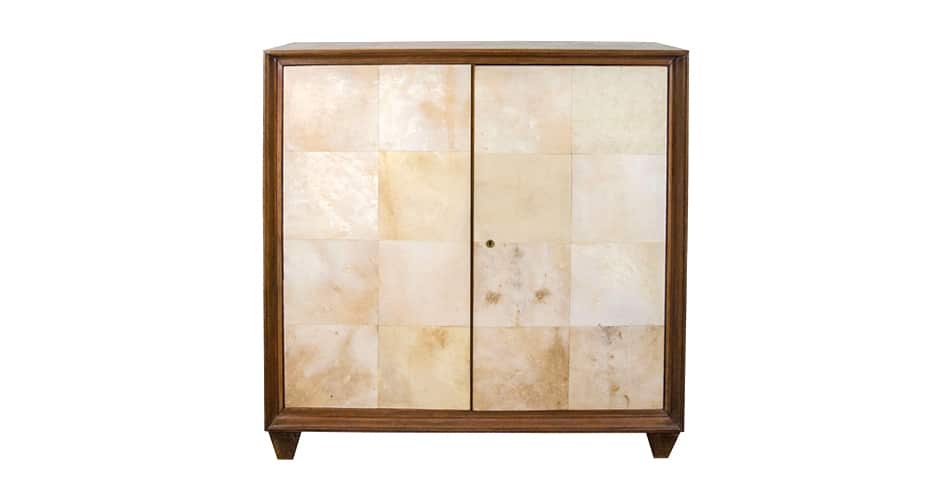 “The designs of Jean-Michel Frank have always influenced me, and this piece is inspired by his work. The patina of the patchwork parchment has an incredible richness and depth.” 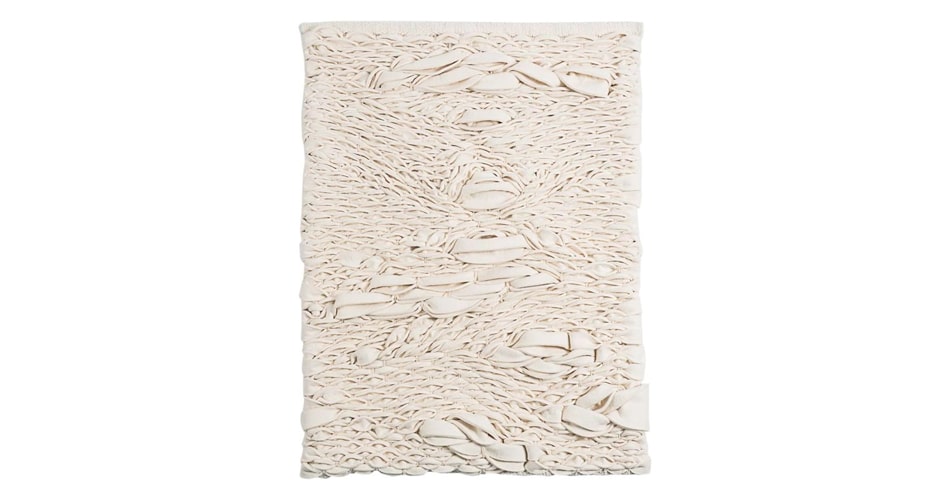 “Tapestries are a beautiful way to make an impact. This monochromatic piece is special because it adds another layer of texture to a room without overpowering.” 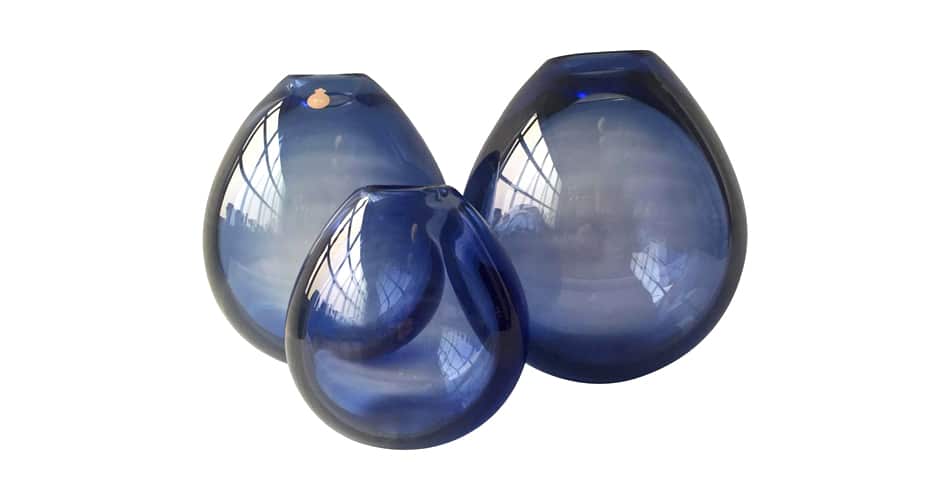 “The smoky blue color of these vases is what draws me to them. Having a set of three pieces in varying sizes makes for a beautiful composition.” 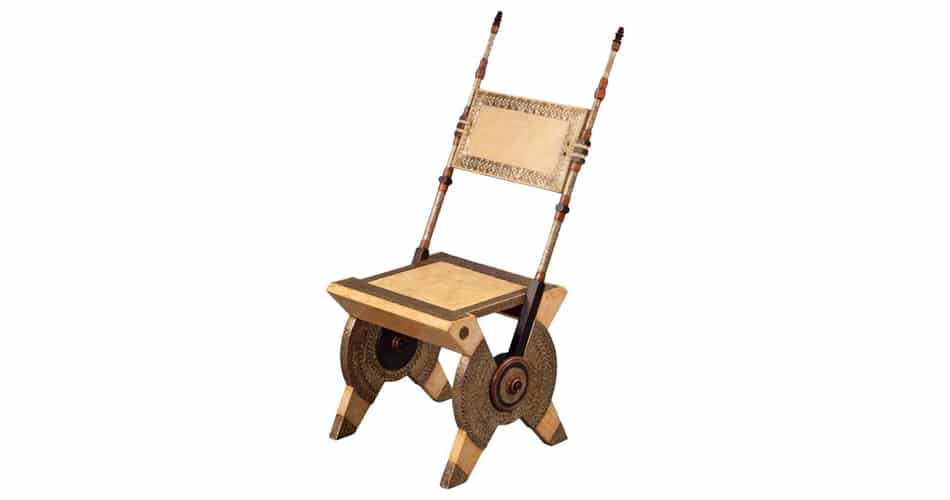 “I’ve always been a huge fan of Bugatti furniture. Each piece is like a work of art. It’s been in an out of style, but I find the mix of materials to be fascinating.” 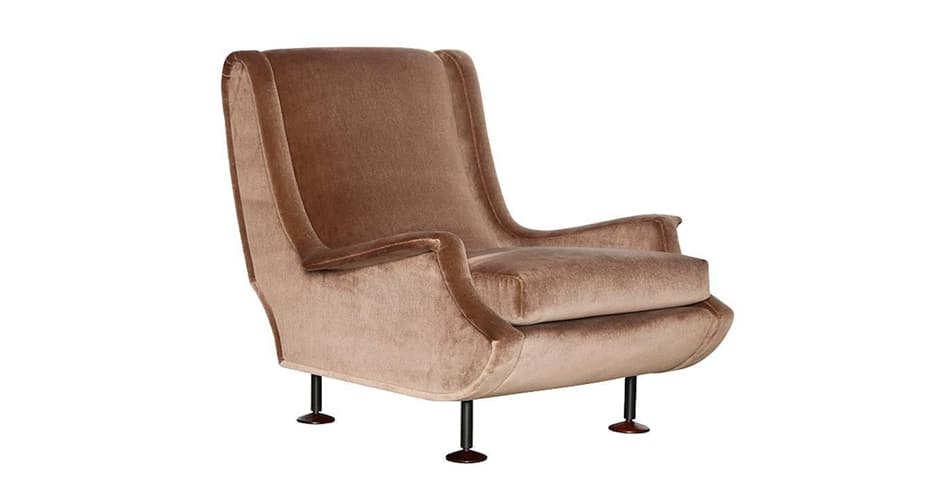 “I love the sculptural quality of this chair. The low arms and wide seat make it extremely comfortable.” 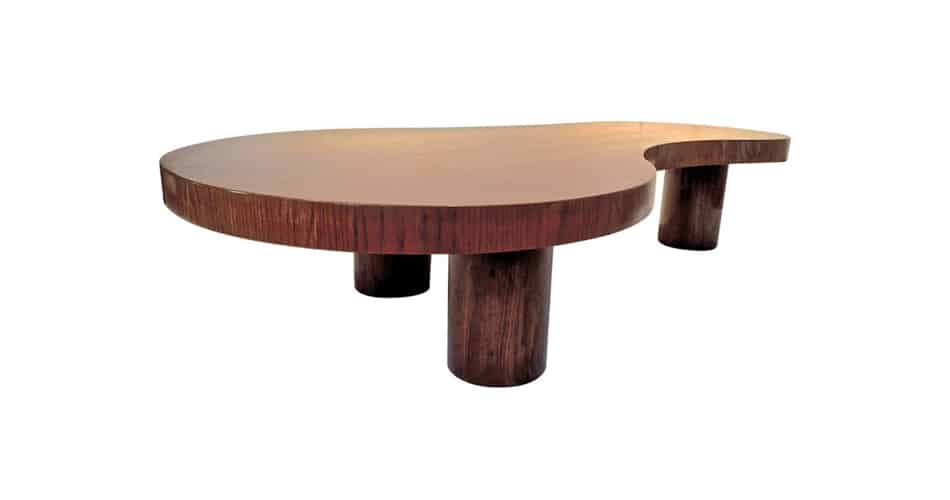 “I love the substantial presence of the table — so rare to see a documented Royère table!”