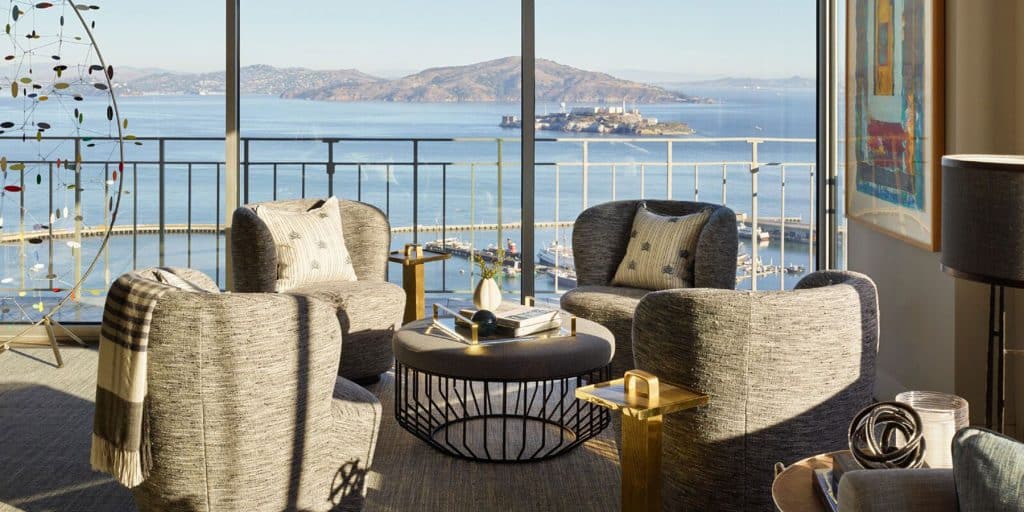 Modern families seek out the Texas-born San Francisco–based decorator for his way with texture, pattern and palette. 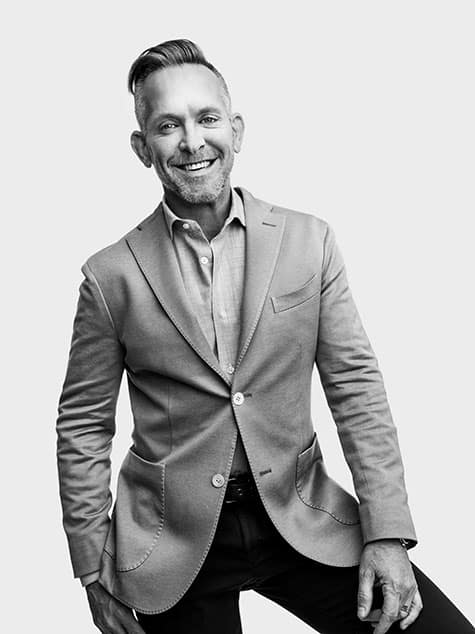 April 12, 2020Jay Jeffers launched his San Francisco interiors studio in 1999, creating homes for clients making their fortunes during the first dot-com boom. He continues to work with tech and startup entrepreneurs today (portrait by Jason Madara). Top: In the living room of a home in San Francisco’s Nob Hill — with long views of the bay and Alcatraz — Jeffers placed four Viccarbe swivel armchairs around an ottoman/coffee table from Phase Design. All photos by Matthew Millman unless otherwise noted

When Jay Jeffers was a preteen back in Plano, Texas, he used the money he made working at Del’s Burgers to buy subscriptions to Architectural Digest and GQ. By 14, he dreamed of becoming a painter or a Broadway song-and-dance man. Instead, he listened to his mother and pursued a dual degree in international business and marketing at the University of Texas. After college, intending to get into advertising, he moved to San Francisco. He waited tables at Zuni Cafe until, at 23, he got a job in the marketing department of the Gap, Inc.

That work left him creatively unsatisfied. Flipping through the UC Berkeley Extension catalogue, he found a selection of interior design classes, including one in the evening that still had an opening and was starting the following week. “I thought, ‘Okay, let’s try this,’ ” he says. At the session’s end, Jeffers remembers feeling that “I could make a living doing this — and love it.”

More classes followed. Hoping to gain some practical experience, Jeffers reached out to a friend, local designer Richard Witzel, who agreed to let him hang out around the office. That casual, free-form role quickly became something much more formal, involving client meetings, installations, showroom visits and fabric shopping. 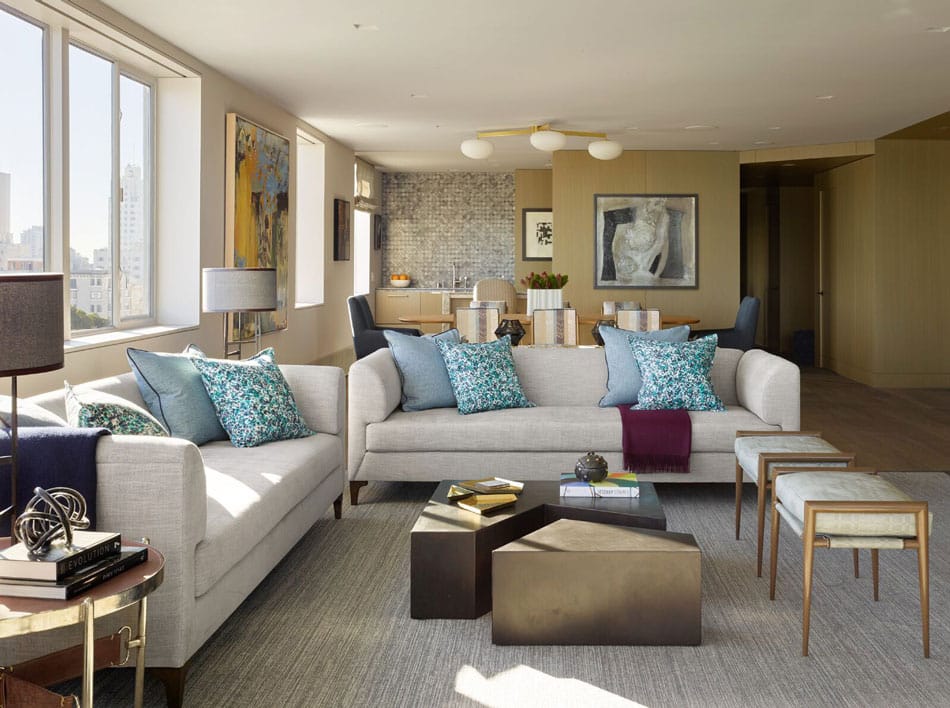 In the home’s living room, a pair of sofas designed by Kara Mann for Baker Furniture‘s Milling Road line embrace a jigsaw-puzzle-like steel cocktail table by Stephane Ducatteau. The stools to the right are by Quintus. 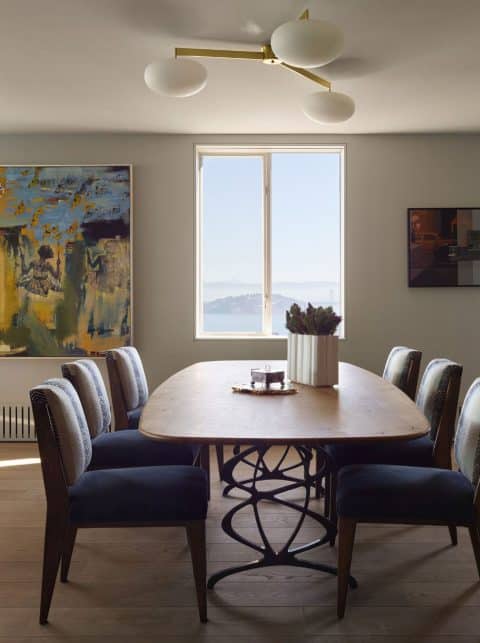 A ceiling pendant from Gallery L7 in the style of Angelo Lelli hangs over a Tom Faulkner oak table. “I like to upholster dining chairs in different fabrics,” Jeffers says of the seats surrounding the table, which are each covered in two textiles. “It adds interest to the room.”

In 1998, as the first dot-com boom began and tech entrepreneurs with newly minted fortunes where acquiring large homes that needed decorating, an article in the San Francisco Chronicle’s then-robust “Home” section featured Jeffers as one of several interior designers to watch — with Witzel’s blessing, he had taken on some clients on his own. The accompanying image featured Jeffers’s own home. “I got a couple of calls right away,” he says, “and that started my business.” Today, the studio has a staff of 15 working out of a converted factory building on San Francisco’s reluctantly gentrifying Post Street.

From the start, Jeffers emphasized designs that were tailored to the young, successful modern family, integrating layers of texture and pattern and, often, a bold palette. “These are not the clients who say, ‘Let’s wait for the kids to be gone before we design our dream house,’ ” Jeffers explains. “They haven’t necessarily inherited their money. Often, they’ve worked really hard in tech, and they’ve made their way and bought their dream houses. They want to live their best lives now, and they intend to do it with their children. As a firm, we take this very seriously.”

One such best-life-now project is an apartment that looks north from Nob Hill to enviable views of Alcatraz and the Golden Gate Bridge. Jeffers and his team turned it into a never-need-to-leave perch. In the living room, they placed two inviting sofas set at right angles around a jigsaw-puzzle-like steel cocktail table by Stephane Ducatteau (there is no such thing as a banal cocktail table in the Jeffers universe) and deployed bright throw pillows in shades of aqua and blue, reflecting the colors of San Francisco Bay seen through the windows. 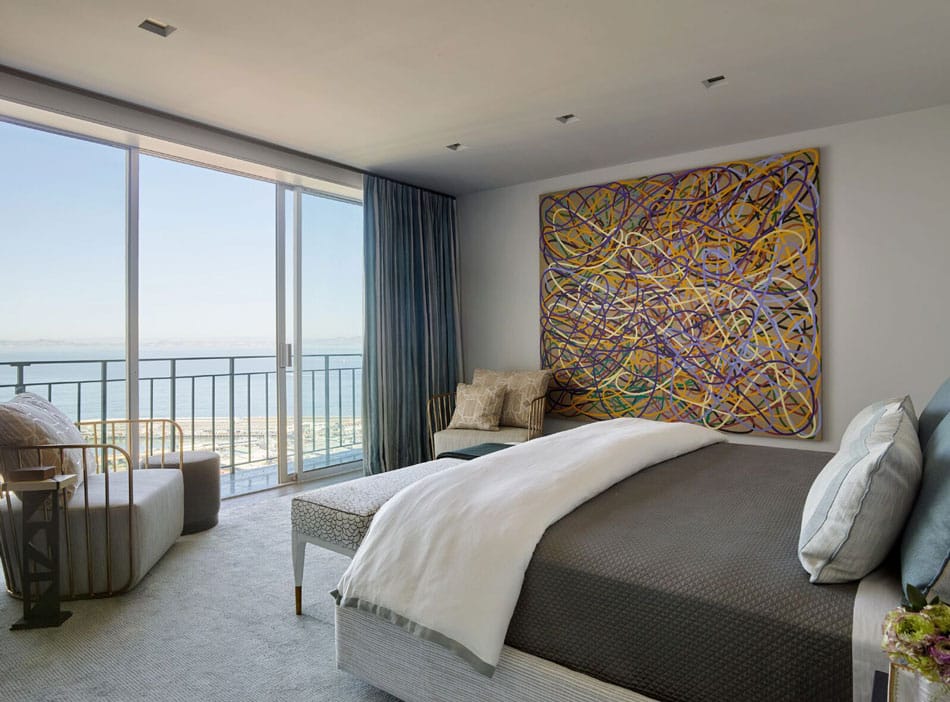 The chairs in the master bedroom are from Phase Design. The bed and the painting — like all the art in the apartment — were the client’s.

Across the room are four curvaceous swivel armchairs from Viccarbe, upholstered in textured Rubelli fabric, and a Wired ottoman/coffee table with steel-tube base from Phase Design. The client enjoys entertaining large groups, so the team installed a 12-foot-long channel-tufted velvet banquette in sky-blue velvet that can accommodate half a dozen guests for cocktails, teaming it with a sculptural drinks tables that Jeffers designed as part of one of his three collections for Arteriors. 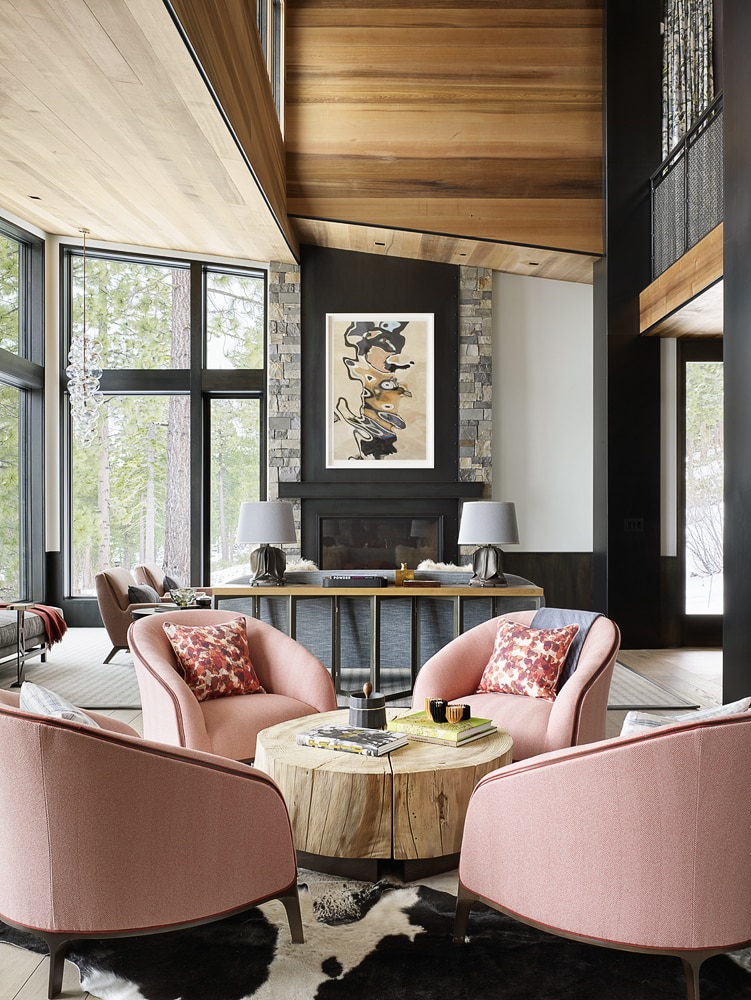 For the living room of a mountain home near Lake Tahoe, San Francisco–based interior designer Jay Jeffers selected a quartet of Bernhardt chairs. “I wanted a dramatic moment,” says Jeffers of his choice of coral-colored Holland & Sherry wool upholstery. “You can see these chairs from many many places in the home.” The seats are arranged around a spruce-stump coffee table by Mimi London atop Saddlemans hair-on-hide rugs. 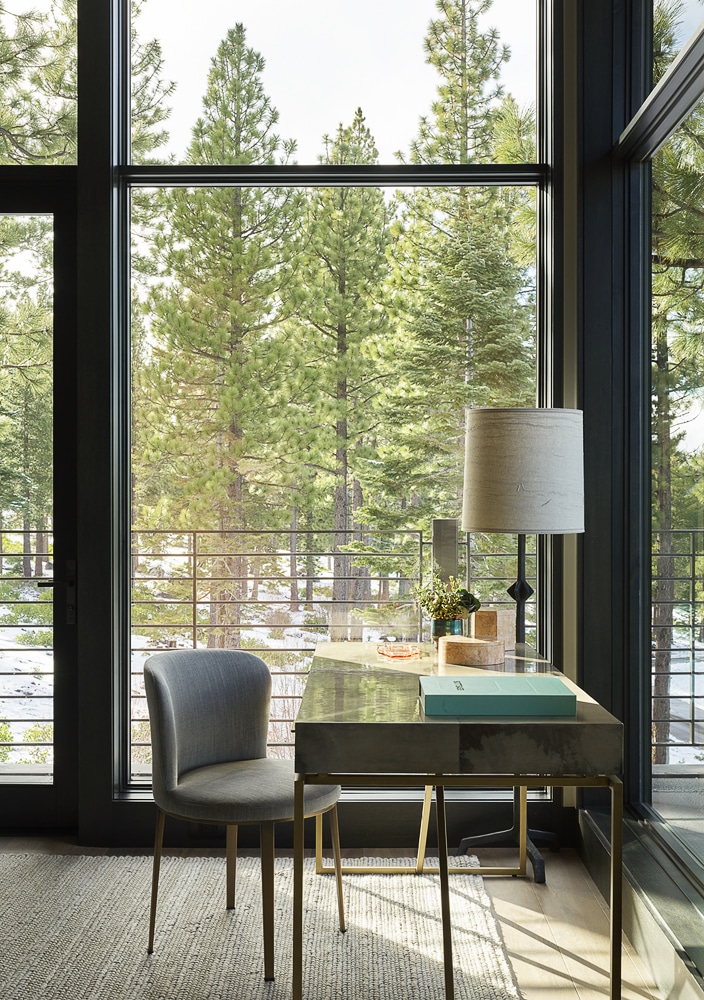 A chair and desk by Interlude Home sit in a corner of a bedroom with nearly floor-to-ceiling windows. The floor lamp is by Arteriors. 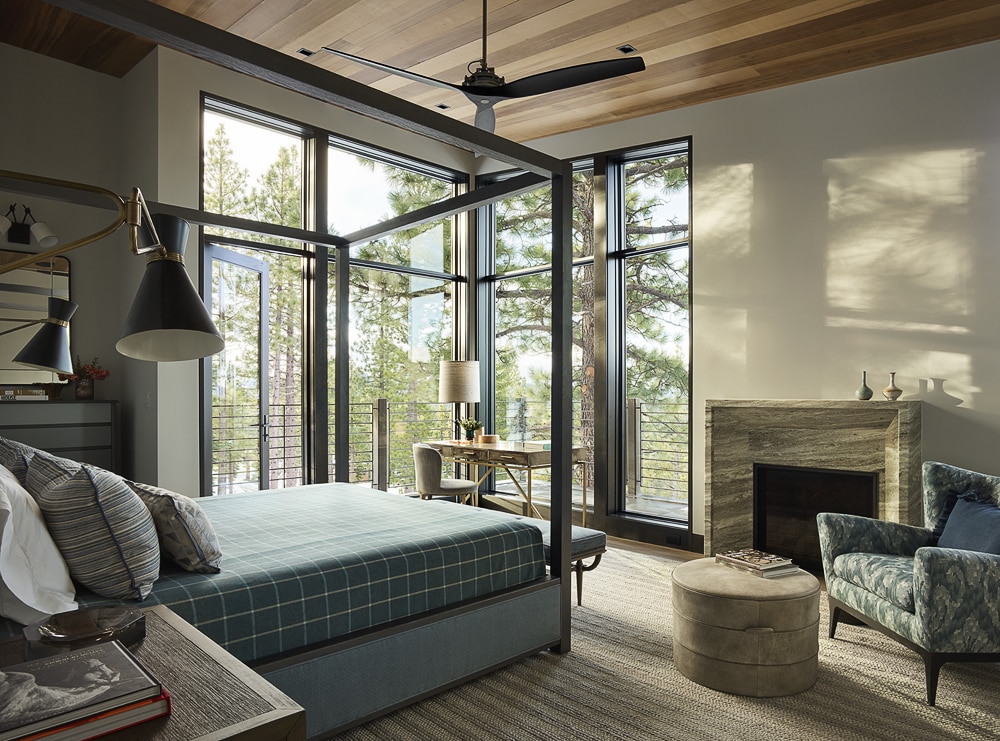 The bedroom’s bed was designed by Thom Filicia for Sedgwick & Brattle. The ottoman is by Nickey Kehoe. 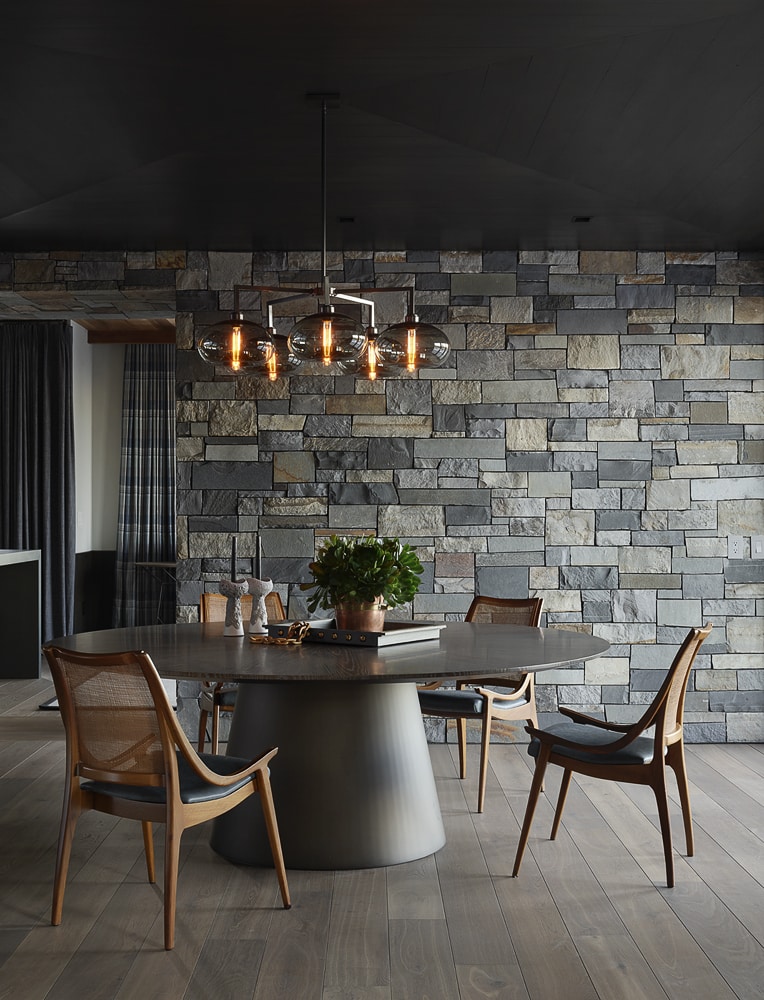 Because the firm’s residential projects are mostly inhabited by young families, the interiors are not precious or museum-like. Jeffers gravitates toward metal surfaces, especially powder-coated or blackened steel, since they are both durable and beautiful. In a Lake Tahoe mountain house, for example, a custom sculptural light fixture of blackened steel, rope and brass, which Jeffers designed with Daikon Studio, cascades through all three floors of the central stair hall. In the dining room, vintage cane-back walnut chairs, designed by Richard Thompson for Glenn of California, surround a Powell & Bonnell Fuego table. In the living room, a trio of ottomans by Casamidy with Mexican cypress inserts is teamed with a chandelier from the Light Factory that resembles a luminous torrent of soap bubbles. Pillows of many different shapes and fabrics, with flanges in imaginative places, create a cozy and inviting feel. “We aim to make our homes luxurious but very liveable,” Jeffers says, “so you don’t have to worry that someone is going to put a drink on a table without a coaster.”

Within minutes of meeting him, one recognizes that Jeffers is averse to putting on airs. “I think of myself as the catalyst, the person to bring out who my clients are, or who they are in the process of becoming,” he says. “But I have no ego, and I’m not fancy. I tell them, ‘At the end of the day, I don’t live here. I want the house to reflect who you are.’ ” 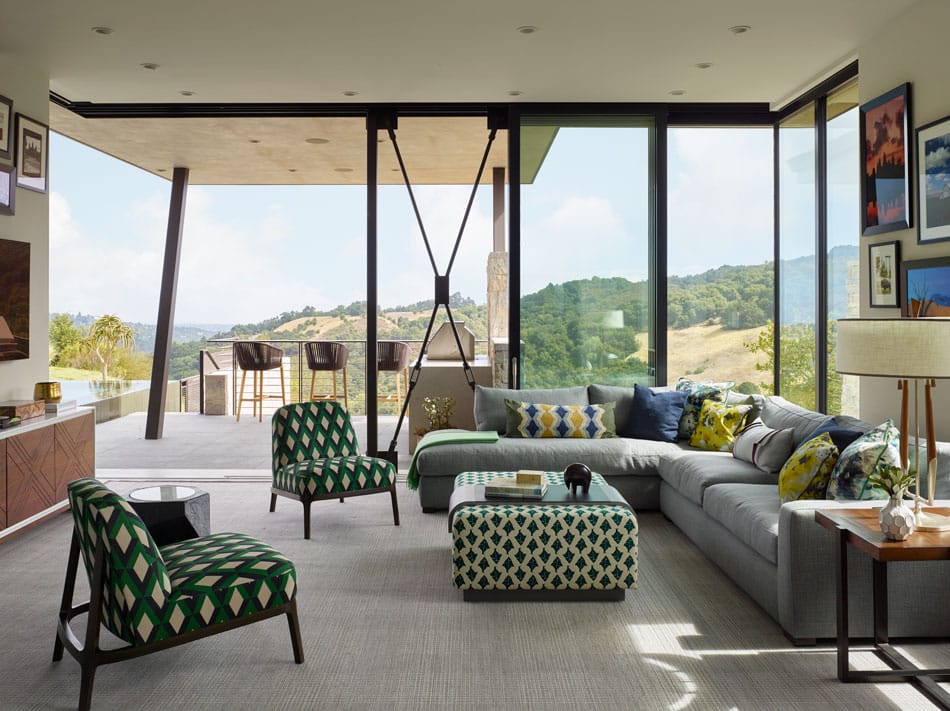 For a seating area in a contemporary home in Portola Valley, about 30 minutes south of San Francisco in Silicon Valley, Jeffers had a Montauk sofa covered in a solid gray linen by Kerry Joyce. He paired the couch with boldly patterned upholstered pieces: an ottoman from Lumifer and two Bernhardt chairs. 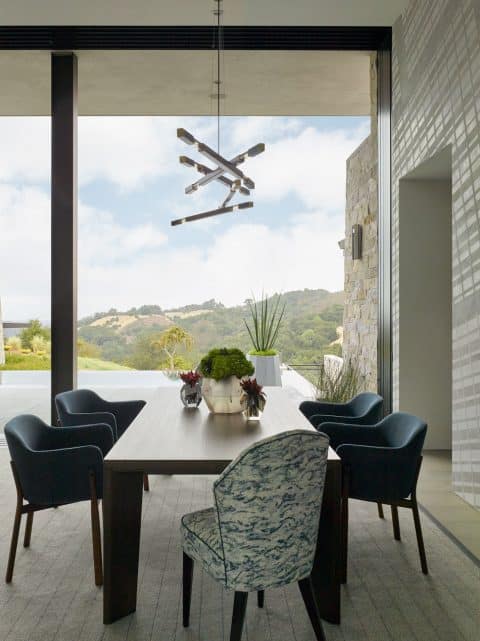 Jeffers suspended a Grand Dynamic Stilk chandelier by Daikon Studio over a Holly Hunt dining table. The four chairs arrayed on the sides of the table are by Tom Faulkner, while those at either end are by De La Espada.

By a project’s end, every table top and every shelf is dressed to the nines, adorned with decorative objects — gleaming vases and sculptures, cocktail paraphernalia, serving trays, illustrated books, planters and eye-catching lamps, like the pair of striking KleinReid cloud-form fixtures with square shades that brings personality to the passage between the living room and entrance hall of a mostly glass house in San Francisco’s Portola Valley. “I like there to be stuff,” Jeffers says. “Stuff is the soul of the house.”

Just as Jeffers embraces “stuff,” he has never feared brilliant color. It’s part of his mission to “fight blah,” he says. Often, that means placing several bold statement pieces in a single room, as in the Portola Valley project, where Stefan Bishop’s lumberjack’s fantasia of a cocktail table shares the living room with a 1950s Italian wing chair upholstered in a nubby stripe. These are set off against a wall of striated plaster, which brings to mind a pattern cast by sunlight and was designed by Jeffers and applied by Willem Racke, an artist with whom the studio has worked for more than 20 years. 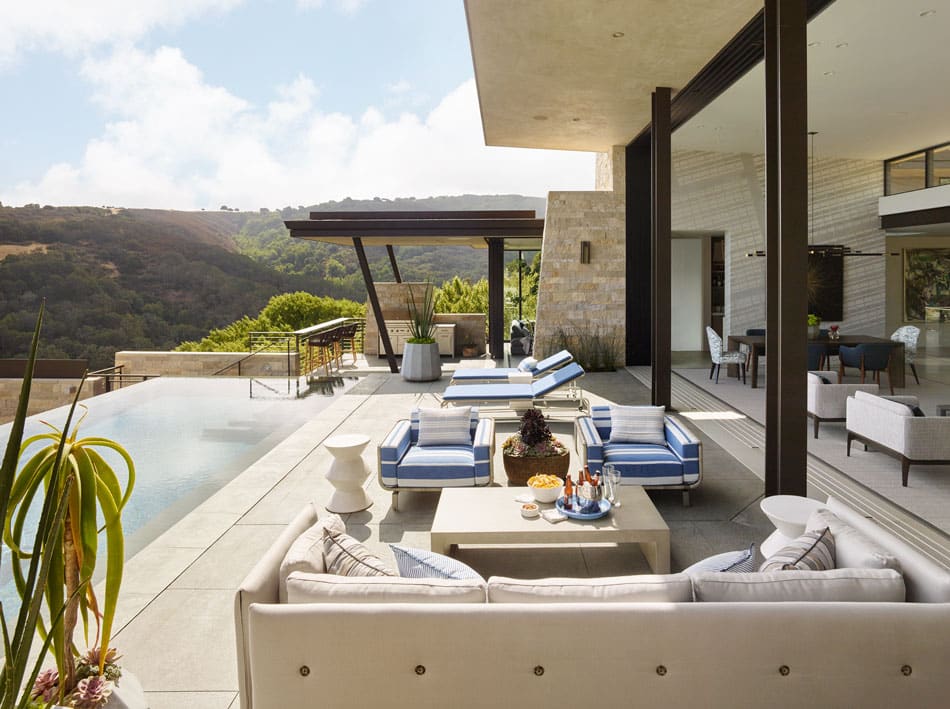 The glass walls of the home’s living/dining area slide open to a broad pool terrace, which Jeffers furnished with a sofa and chaises by RODA, as well as Holly Hunt armchairs. 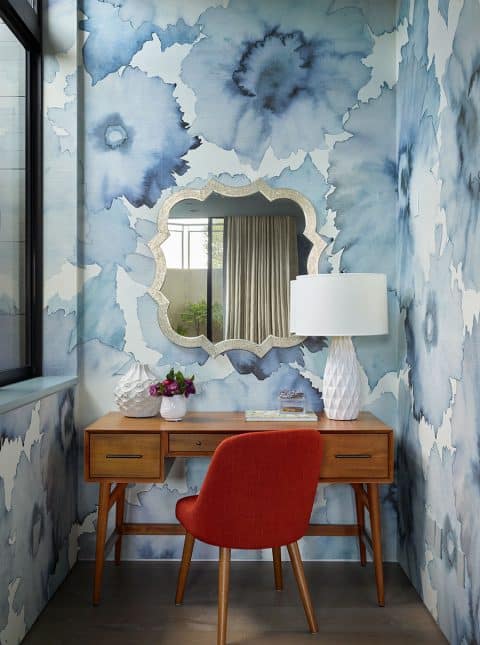 Jeffers wrapped the walls of a home-office alcove with Phillip Jeffries’s Bloom print on manila hemp.

The way Jeffers sees it, he’s creating a living history for the home — and its owners. This can entail selecting art with a certain resonance to hang on the walls. “Even though it’s all newly acquired,” he says, “it should feel as if the furniture and art has been collected over time, as if your grandmother gave you a chair you just had to find a way to include or you went online and bought some pieces you couldn’t live without.”

“I like to mix eras,” he continues, “because it helps to create that story. If I’m doing a very modern house, I won’t go completely contemporary, because that’s sterile and one note.” Instead, he’ll introduce a vintage French Deco armchair or a Jacques Adnet table. Project manager Andy Reid, whom Jeffers calls his “vintage and antiques whisperer,” handles the acquisition of such pieces, many of which are sourced from 1stdibs galleries.

By layering color, texture and pattern, Jeffers produces a richness that’s both inviting and comfortable. “We strive to create the most incredible space for someone to live with their family and friends,” he says. “It’s as simple as that.” 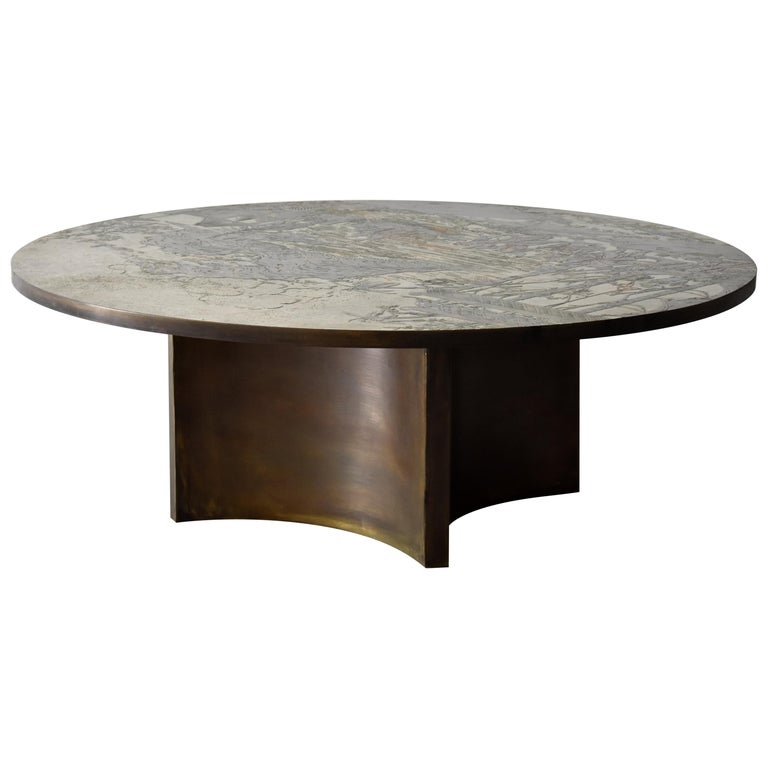 “I have always loved Philip and Kelvin LaVerne. Their work is so unique and so original.” 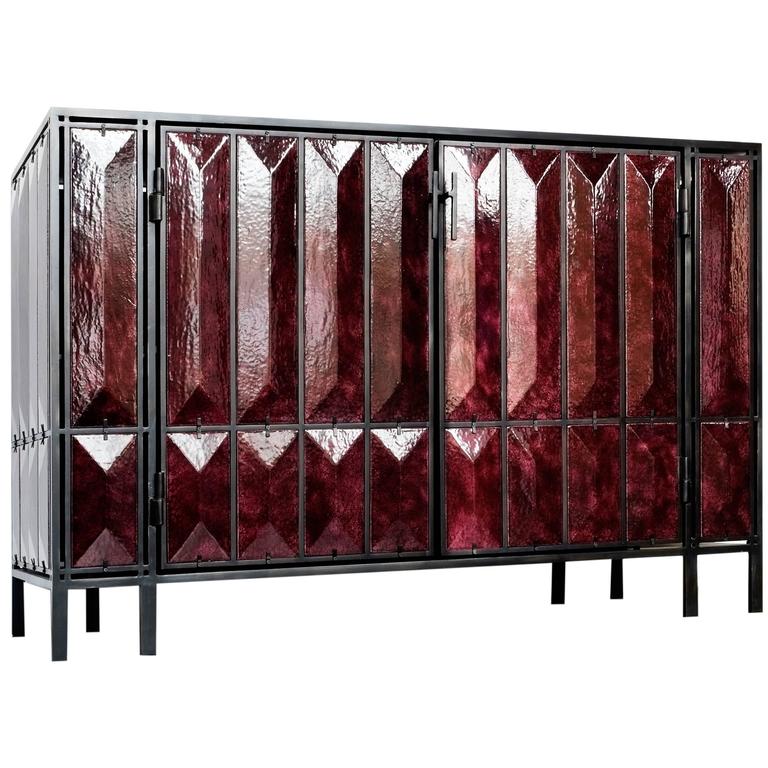 “Christophe Côme is definitely a favorite. We have placed many of his works of art with clients over the years.” 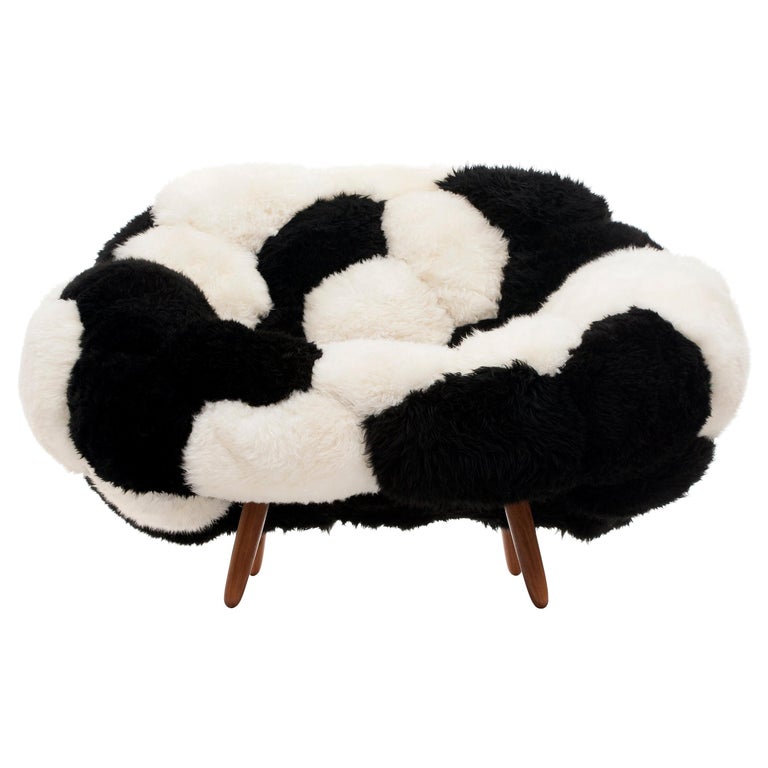 “I have the perfect spot for this in my place in the Napa Valley. Talk about cozy!” 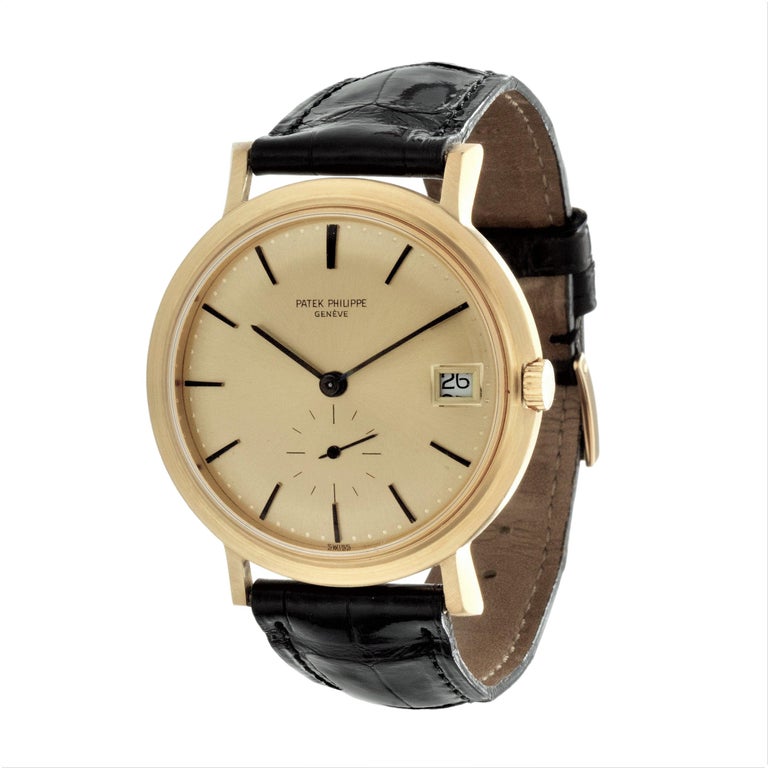 “It’s a goal of mine to have a beautiful dress watch from my birth year. This one will do just fine!” 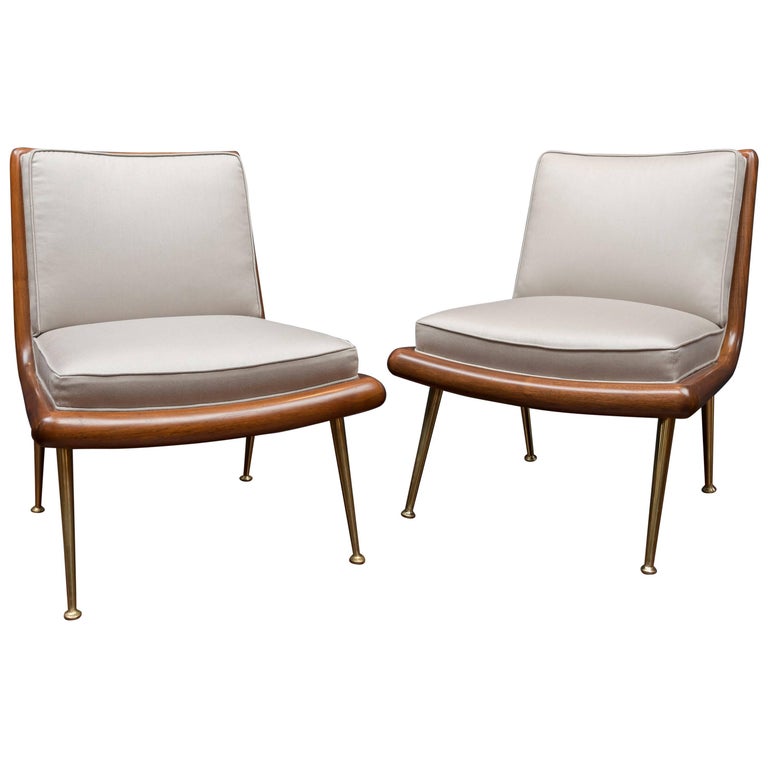 “When you’re looking for perfection, the elegant lines of pieces by Robsjohn-Gibbings are hard to beat.” 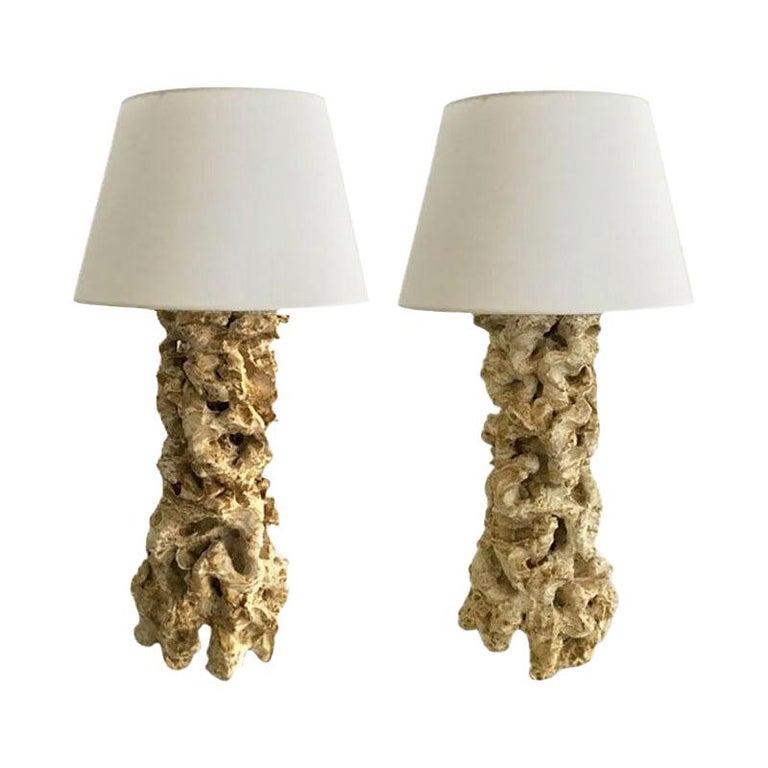 “I have been obsessed with Peter Lane for a while. These lamps would be fantastic in a minimalist dining room.” 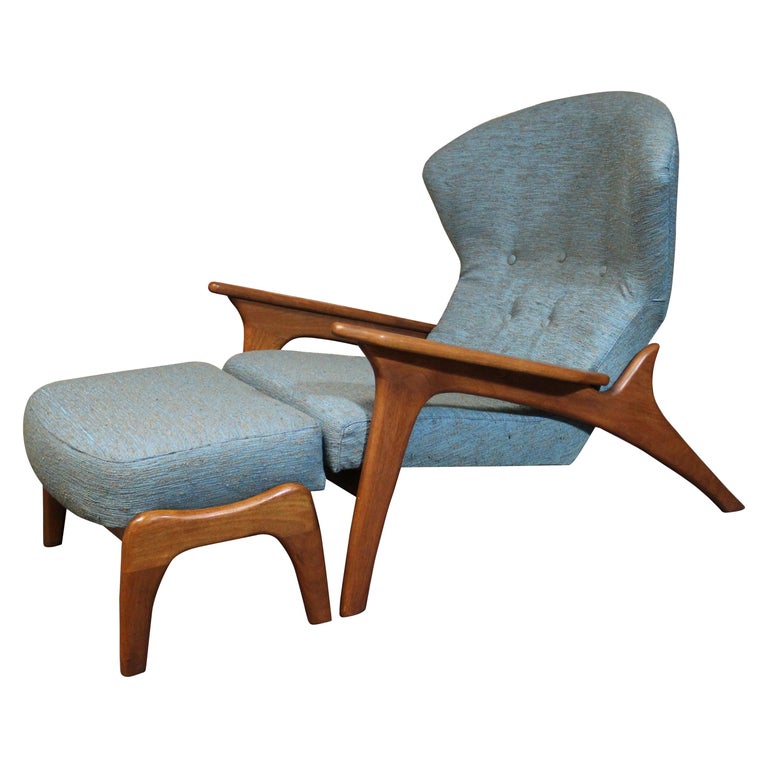 “The kind of kooky, prehistoric lines of Adrian Pearsall’s work have always intrigued me. I love using pieces like this for rooms that need that little extra hit of cool.”

“Years ago, I placed a piece by James Nares with clients, and I have followed his work ever since.” 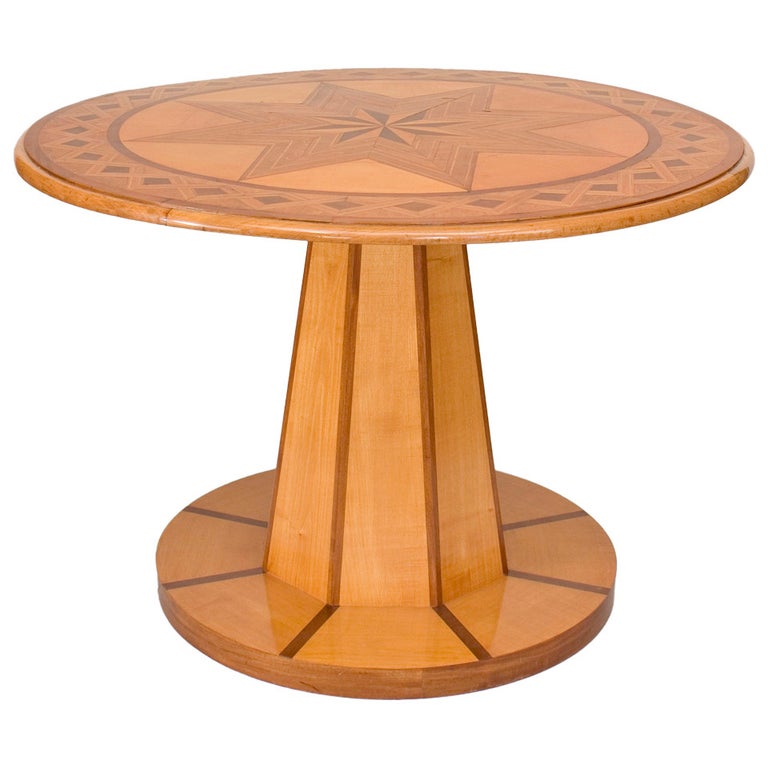 “I love Biedermeier. It works really well in a modern setting.”