A French Designer Finds His Place in the American Desert 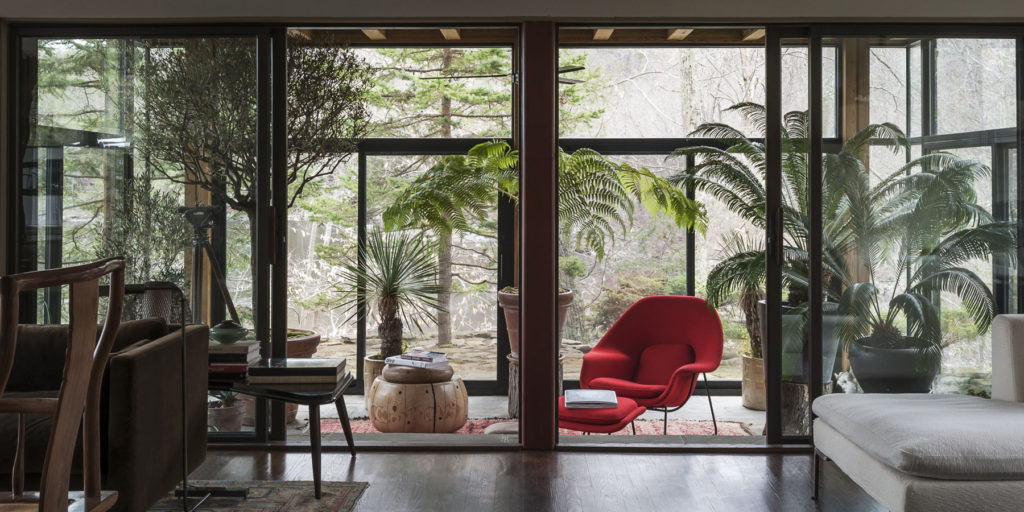 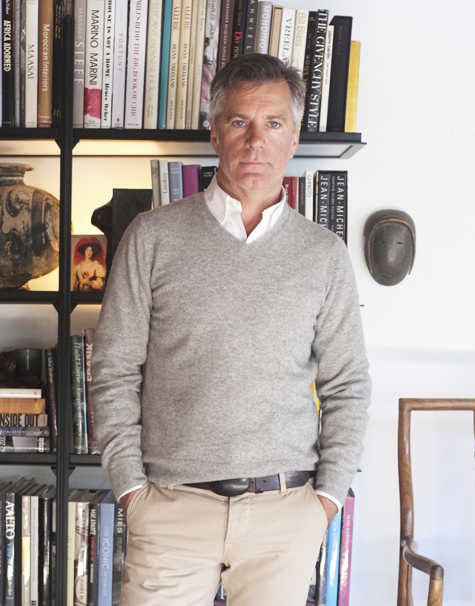 Jean Claude Huon is a man of rare talent and extraordinary good fortune. Raised in the picturesque medieval cathedral town of Chartres, France, he grew up within a highly cultivated family involved in real estate, and it was expected that he would take over the business one day. But Huon had another business in mind— fashion. As luck would have it, a summer internship at Pierre Cardin in 1979 led to his managing the designer’s extensive licensing program after he graduated that year from the Lycée Marceau in Chartres with a BAC in economics and sociology. “It was my job to keep the Cardin licensed products relevant to the brand DNA,” Huon explains. For the next 20 years, he worked for France’s then most enterprising designer, traveling the world, often in Cardin’s company, as his empire expanded into Japan, China, the Soviet Union, South America and the Middle East. It was a tremendous education in comparative cultures and design, which shaped his creative vision in years to come.

If you had told Huon back then that he would end up running a design studio in the modernist desert oasis of Palm Springs, California, he would have likely laughed at the improbability of it. Yet life has a way of turning the improbable into the inevitable, and he credits Cardin with giving him the confidence to chart the singular course of his career. “Pierre Cardin is a visionary, and he was also my mentor,” Huon says with evident fondness for the 93-year-old. “He guided me in one direction but always told me to follow my talent wherever it leads. It was important advice.” 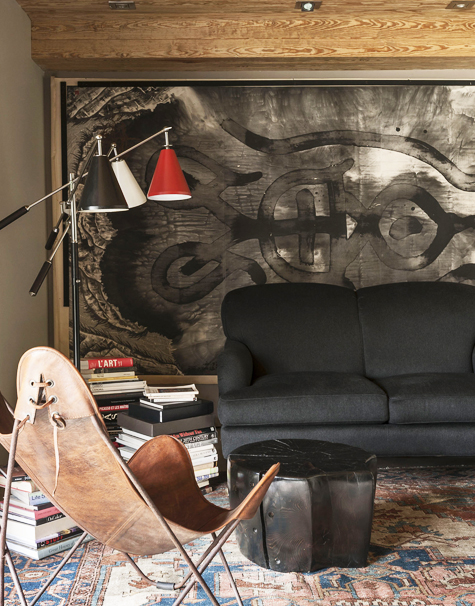 Huon and his boyfriend, architect Uriel Ortega, transformed a nondescript ranch house on New York’s Sagamore Lake into an artful retreat from the city. A seating area includes a vintage leather butterfly chair and a wood seat by Daniel Pollack. Photo by Matthew Williams

In 1991, Cardin sent Huon to New York to oversee his U.S. operations. Huon immediately felt at home and made many friends in the design world, including the late interior designer Robert Homma, whose Asian curio shop, Dimson Homma, on the Upper East Side, was a favorite haunt of New York tastemakers. “Envisioning a room with a new approach, color and furniture, has been a daily obsession for me since I was very young,” says Huon. So he took enormous pleasure in accompanying Homma on weekend flea market forages and Upstate antiquing jaunts, and before long, he began collaborating with Homma on various interior design projects.

Through this gregarious and fabled aesthete, Huon met Wayne Williamson and Bruce Goers, life partners who were co-principals of Insight West, an acclaimed design firm in Palm Springs known for spare, eclectic yet thoroughly luxe interiors. Three or four times a year, Huon flew out to see his friends and commune with the countryside. The designers, in turn, took him to visit the modernist houses of Albert Frey, Richard Neutra, John Lautner and the like, tutoring him on the finer points of the designs and especially on how the architecture melded with the landscape. During these sojourns, Huon began dreaming about a life in the desert designing beautiful homes. 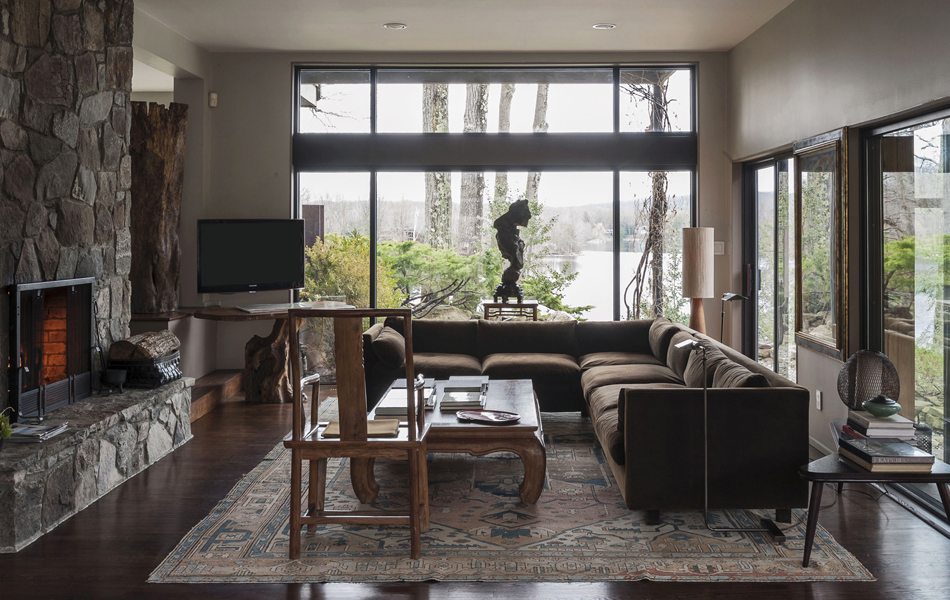 At the Sagamore Lake house, Huon and Ortega paid special attention to the landscape, adding Japanese-inspired plantings that framed the lake views and infused the property with a Zen spirit. Photo by Matthew Williams 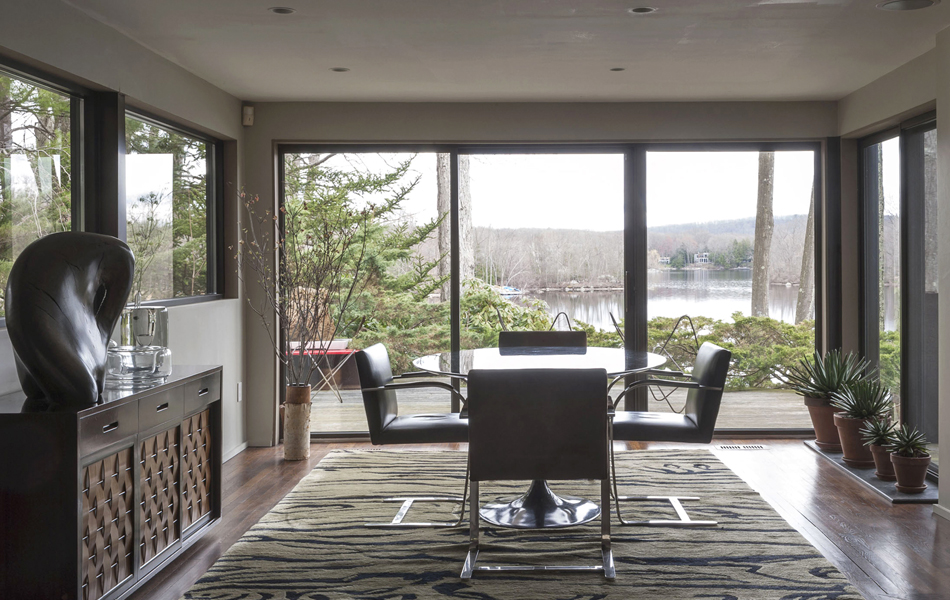 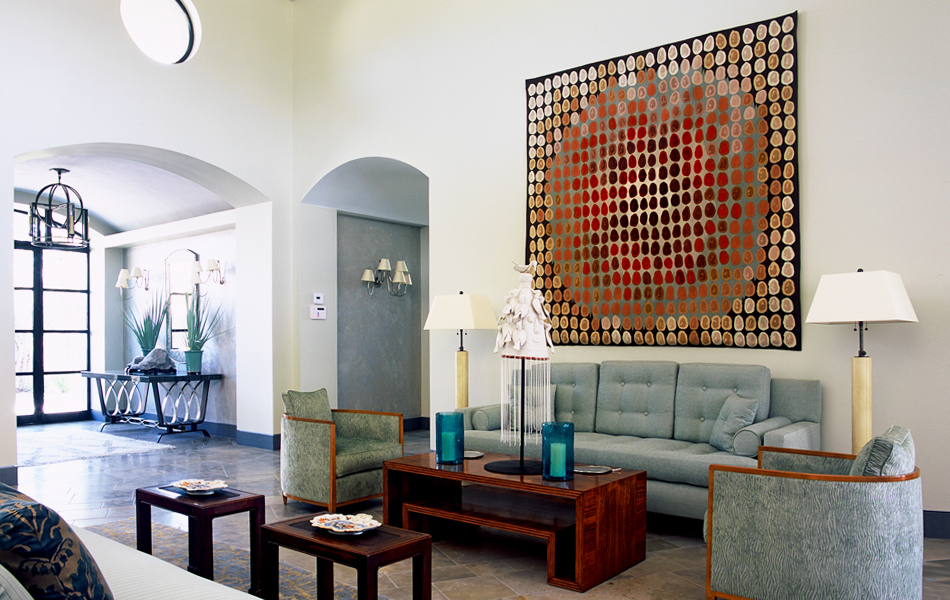 For a desert residence, Huon incorporated elements of French decor, including Art Deco–inflected barrel chairs and wall lights in the style of Jean Royère. Photo by David Glomb 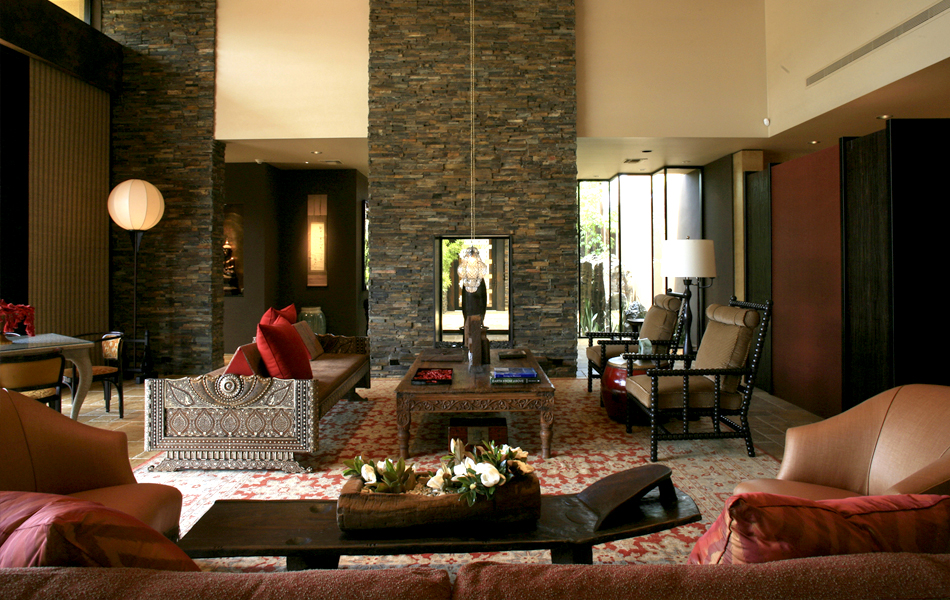 For a second home in the area, the designer embraced a more global aesthetic, incorporating a richly carved wood daybed purchased in Turkey (left) and another from Africa (foreground) in a living space with streamlined architecture. Photo by David Glomb 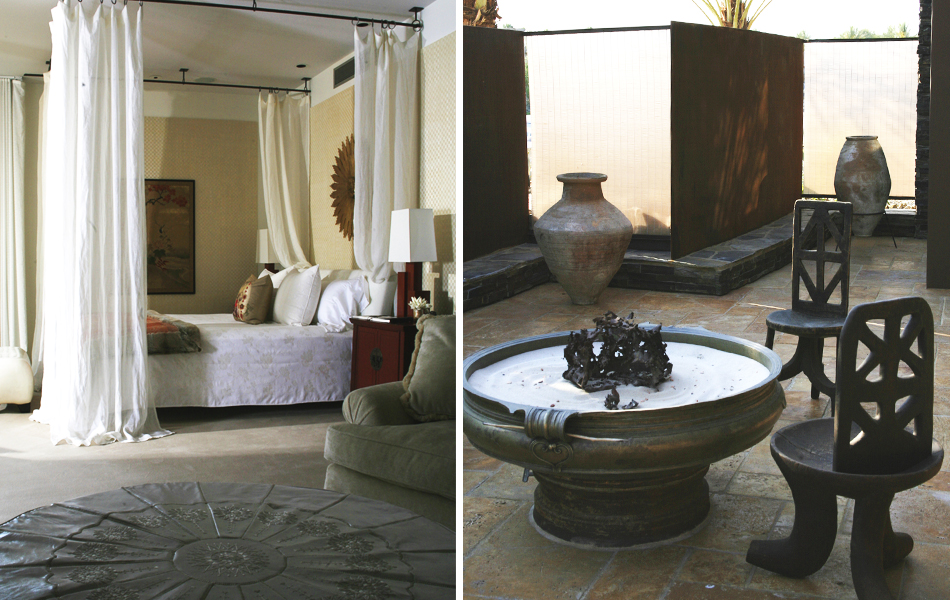 In the same residence, a bedroom’s dramatic currtains and a collection of African stools and metal vessels in an outdoor seating area add to the eclectic ambience. Photo by David Glomb 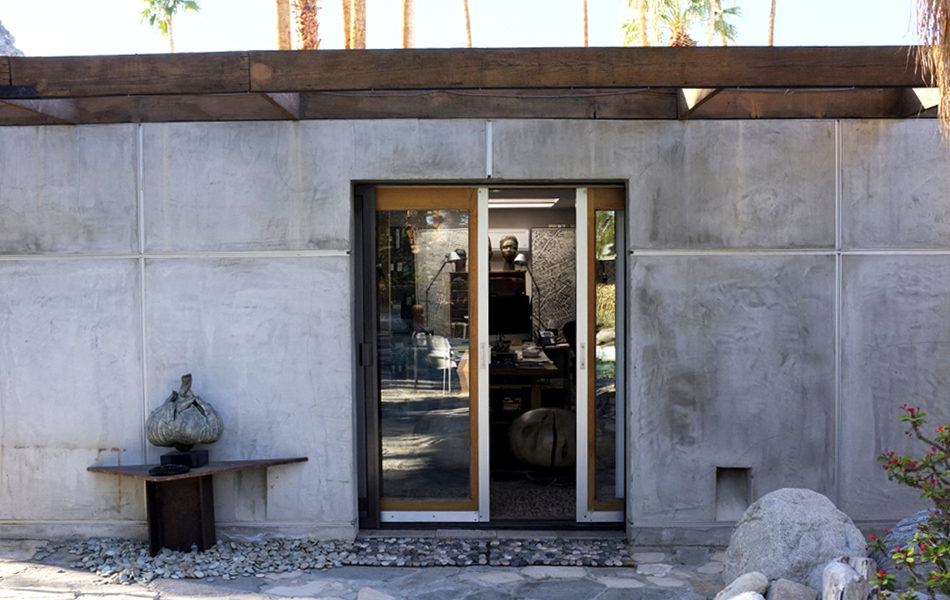 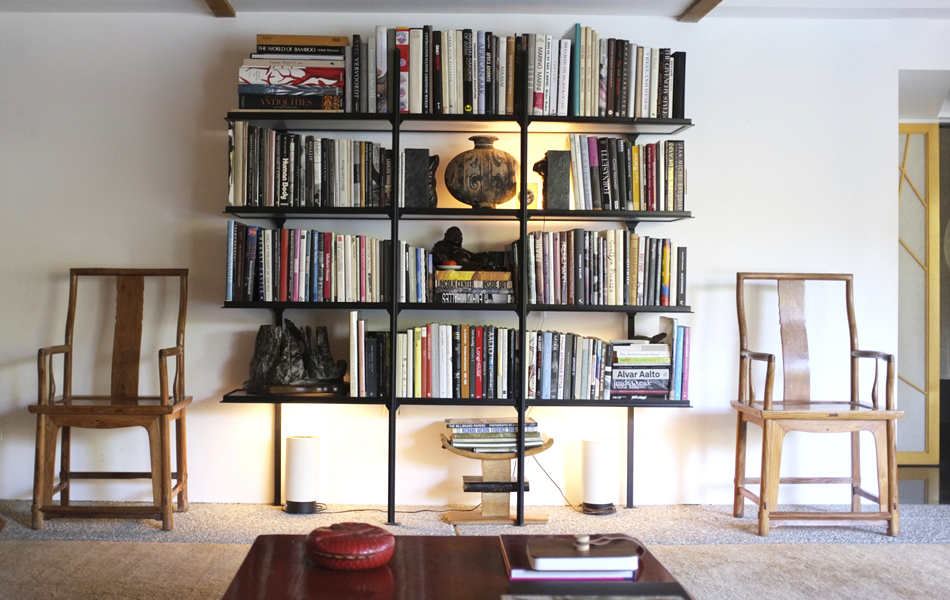 Inside, the decor reflects the breadth of the designer’s experiences and tastes, blending East Asian furnishings — for which Huon acquired a taste from his friend the New York shopkeeper Robert Homma — with more contemporary design items. Photo by Uriel Ortega 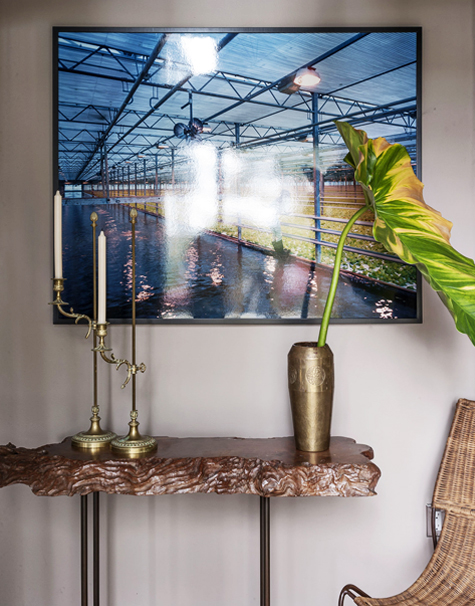 In 2000, Cardin closed his U.S. operations, and rather than return to France, Huon took on two new jobs in New York: advising the French publisher Jalou on the launch of the U.S. version of L’Officiel and overseeing the licensing business of his friend Bill Blass. Then came 9/11. Like most New Yorkers, Huon was shaken, and suffered the additional shock of having the Jalou venture canceled. He and his boyfriend, the Mexican-born architect Uriel Ortega, decided to find some respite in nature by acquiring a home in the country. Two months later, they found a nondescript ranch house on a lakefront with views of the surrounding hills, about an hour north of the city.

On weekends over the next two years, Huon and Ortega contemplated how to transform their home into a stylish and tranquil retreat. They ultimately decided to approach the design from the outside in, rethinking the grounds first. Collaborating with an old friend from Cardin, Olivier Giugni, who now owns the New York floral atelier L’Olivier, Huon devised a scheme to transform his home’s suburban jumble of plantings into a Japanese-inspired landscape of rocks, boulders, pine trees and moss garden.

Ortega, meanwhile, plotted how to reconfigure the house to not only embrace its scenery but reflect its Zen spirit. This entailed replacing several exterior walls with glass to open the house to the lake and create a sunroom; he also punched windows into several walls to frame distinctly crafted views and  removed a few internal walls for a more fluid layout. To complete the remodel, he wrapped a deck around the perimeter. 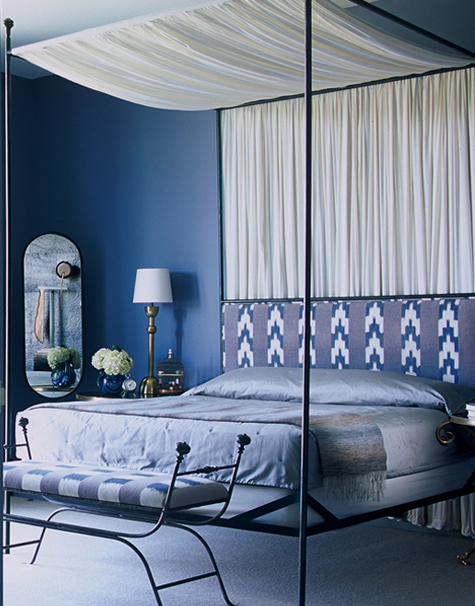 The designer combined sculptural metal furnishings, graphic prints and metallic-tinged linens in the bedroom of one desert residence. Photo by David Glomb

With help from a local craftsman, Huon took on the design of a minimalist kitchen, with cabinets made of African Sapele wood and slate countertops, the slabs individually chosen from a local quarry. With Giugni’s guidance, he outfitted the sunroom with an assortment of stately palm and olive trees, in equally impressive pots, to add another layer of arboreal interest to the wooded view framed by the space.

The couple outfitted the interior with Italian modern and American mid-century furnishings, along with some dark wood European antiques and African and Asian pieces. Huon paid special attention to the rugs, which came from a collection assembled during his travels. “For me, rugs are very important,” he says. “They are such a simple way to alter a room’s atmosphere, especially when the seasons change.”

Varying in period and origin, with some splashes of color, the furnishings harmonized with the natural tones outside. It was the decorative approach his Insight West friends always touted. When Huon’s fashion and design associates saw the finished home, they were enchanted, and their praise gave him the confidence he needed to make a career switch.

In 2009, Huon and Ortega opened design studio Wave Atelier, which served as a platform for emerging furniture, fashion and accessories brands that Huon hoped to guide. With their country house as a calling card, it wasn’t long before the couple had a number of projects. Starting a new business in the city was demanding, however, and the couple found they had less time to spend Upstate. “We also felt we had realized our vision and were ready to move on, to explore new horizons, but we weren’t sure where,” says Huon. 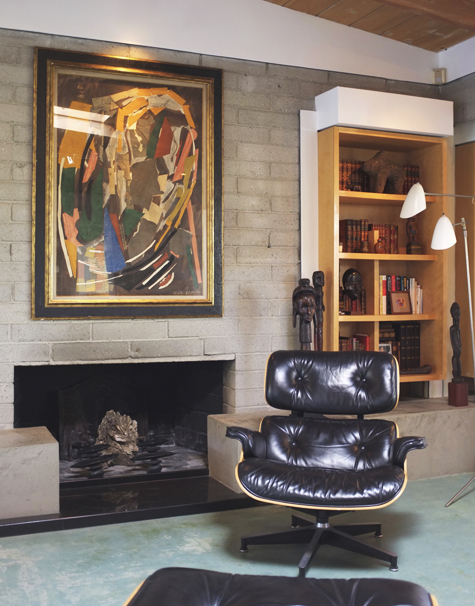 Put on the market in 2012, the house was soon snapped up by a husband-and-wife architectural team world-renowned for their work contemporizing the Manhattan cityscape. So enchanted were they with the decor, they insisted on acquiring most of the furnishings. The couple’s profound appreciation for what Huon and Ortega had achieved was deeply validating. It came at a critical moment, too, as Huon’s mentors at Insight West had died in quick succession, leaving their longtime deputy, Manuel Alaniz, to manage the firm alone. When Alaniz sought  Huon’s advice in running the business, he and Ortega realized that Palm Springs was the new horizon they’d been seeking. Huon and Alaniz began collaborating on projects, and last year, the couple moved to the desert.

In a short time, the business has blossomed, with local commissions and requests from longtime clients for Huon to decorate their main residences in such cities as Seattle, Chicago and New York. Although he seems to have traveled literal and metaphoric miles from his days with Cardin, Huon is again preserving the DNA of a much-loved brand, all the while making his own mark in the desert. 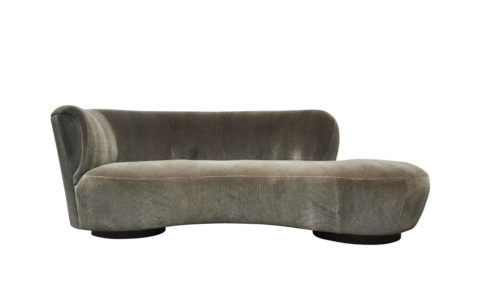 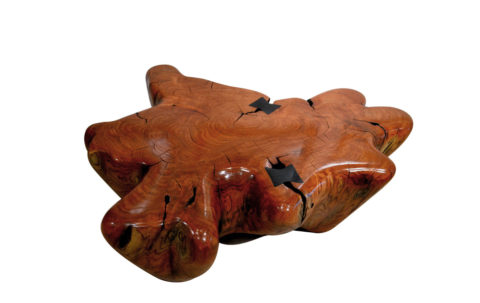 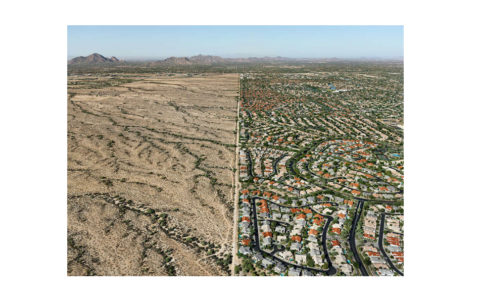 Shop Now
Salt River Pima-Maricopa Indian Reservation/Suburb, Scottsdale, Arizona, 2011, by Edward Burtynsky, offered by Rena Bransten
“This photograph presents a vivid statement on modern living. The fact that the image can be enjoyed on both a micro and macro scale is a talent of Burtynsky’s.” 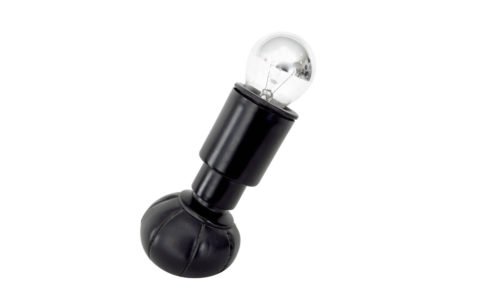 “A personal lamp that is modern and practical, with subdued elegance in its details” 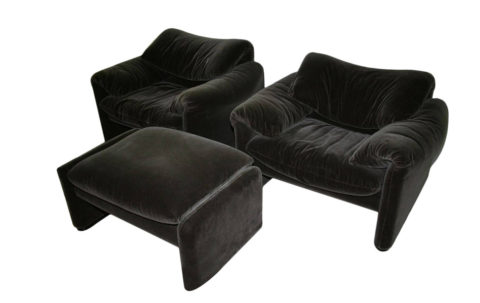 Shop Now
Vico Magistretti for Cassina lounge chairs and ottoman, 1973, offered by Emily Summers Studio 54
“These chairs have versatile architectural silhouettes, with an emphasis on comfort. They have an alluring, lasting appeal.”