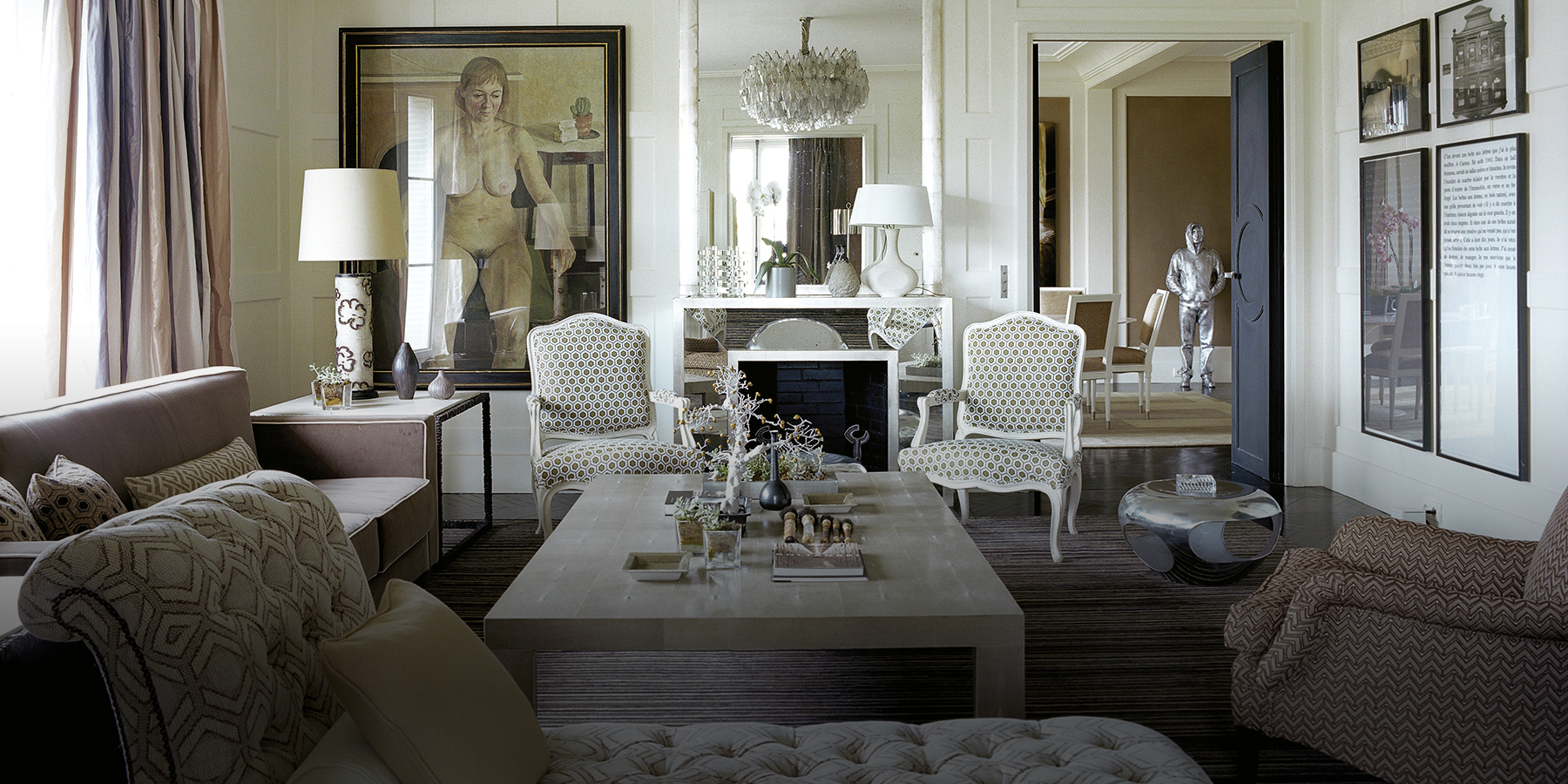 As made manifest in his beautiful monograph, Deniot has an enviable ability to combine periods and styles, mixing inspirations Gallic and otherwise to create spaces grounded in tradition, even as they embrace the modern.

December 2014Movie-star handsome, the French interior designer and architect Jean-Louis Deniot lives a charmed life. Not that he isn’t hard at work on most days — traveling around the globe to supervise his various worldwide projects while managing a fast-growing team of employees in his New York and Paris offices.

When he’s not boarding an airplane or working abroad, he resides chiefly in his Paris apartment or his home in the French countryside. As is made clear by his Rizzoli monograph, Jean-Louis Deniot: Interiors, Deniot gets to hang out in some of the most richly furnished properties in France and the United States — and not just those of his clients.

Inside the Book Jean-Louis Denoit: Interiors

Written by Diane Dorrans Saeks and divided into four sections — “Left Bank,” “Right Bank,” “Paris Weekends” and “French Style in America” — the book spotlights 18 properties, several of which belong to Deniot. The personal projects are interspersed with the wonderful interiors he’s created for a range of clients, from a Paris apartment in an 18th-century building, filled with a mix of contemporary pieces and period furniture, to a sprawling art-filled Chicago flat overlooking Lake Michigan.

The book opens with Deniot’s own elegantly chic apartment on Paris’s rue de Lille, where every surface has been carefully considered. There are marble floors and walls painted in matching faux marbre, plus wallpaper featuring gold threads and crystallized silver. But Deniot tempers this incredible richness of detail with a typically subdued and largely monochromic palette of grays, creams and an icy blue. Throughout, the furnishings are mostly sleek and modern.

A guest bathroom exemplifies Deniot’s creative ambition. In a space where other designers might simply use paint or wallpaper, it’s a triumph of materials. Denoit combined thin strips of contrasting stone to create a rigorously striped tour de force of careful craftsmanship.

In contrast to the Parisian elegance that starts the book off, Deniot’s seven-bedroom manoir in the French countryside, where on weekends he entertains friends from all over the world, gave him an opportunity to work within a more conservative scheme. He dazzles with his selection of velvet and striped fabrics, eclectic furniture and somewhat brighter colors.

Here, in a 19th-century turreted stone home, Deniot handles modern furniture with aplomb, and he doesn’t hesitate to mix elegantly shaped armchairs from the 1950s and ’60s with 18th- and 19th-century gilded antiques.

With his sister and business partner, Virginie Deniot, the French interior designer also owns a rustic 18th-century house in the Touraine countryside. This is a family house, large and comfortable and decorated with a combination of quietly luxurious fabrics and flea market finds.

Interiors also shows off Deniot’s ability to successfully translate his style stateside. The book finishes with his own Regency-style house in Los Angeles, where he brought in subdued creams, browns and grays, and mixed his particular brand of modernism, inspired by the great French decorators who preceded him, with a fresh California look. He employed decorative accents in gold and silver, adding, say, Stiffel bronze lamps and custom pieces from Jean de Merry, a local showroom.

Deniot had to rework the house, which was designed in 1938 and overlooks Beverly Hills, to bring it up to date, but he paid considerable homage to its original architect — the much sought-after Paul R. Williams, famous for his mid-century modern film set–like architecture — when renovating and decorating, retaining many of its original Hollywood Regency details.

Between his travels to projects in India and New York City, Deniot spoke from Paris with 1stDibs about the book, as well as the design inspirations that led to the creation of the spaces it depicts.

1. Apart from the great European decorators and designers you mention in your book — Henri Samuel, Jean-Michel Frank and Alberto Pinto — who out there inspires you? Any Americans?

All the fabulous old masters and great professionals, such as Renzo Mongiardino and Maison Jansen, among many others. As for contemporary designers, my absolute favorites are Kelly Wearstler, David Collins, Jacques Grange and Peter Marino.

2. Did you ever imagine your firm would grow to be so successful and international? As busy as you are, are you still enjoying what you do?

One of my first projects was an apartment in Saint-Germain-des-Prés for an American investment firm. It was a full renovation, from books to clothes hangers. It was the only project I had at the time, and I derived immense pleasure creating it from A to Z.

But every project has given me satisfaction as each one has helped me to grow. I take on only projects I like, with people I like, so there is no effort of any sort. I give myself entirely to the work. I am very lucky to collaborate with incredible laborers, craftsmen and artisans, too. Each project is an achievement, and I am always looking forward to the next one. I can never have enough: I always need more! Bigger and better!

“Every project has given me satisfaction, as each one has helped me to grow.”

3. Tell me about the extraordinary striped-stone guest bathroom in your Paris apartment, which you write was inspired by the work of French conceptual artist Daniel Buren.

This bathroom was designed with two tones of stone made into a striped assemblage. I used the striped stone on the bathtub’s front and back wall and on the floor to create a very sculptural and graphic effect. I selected two specific stones — French limestone and Cascais gray limestone from Portugal ­— as I wished for the mishmash of the gray’s chic and the beige’s warmth. These two stones are very quiet, plain, without veins. The effect comes from the design rather than the material.

4. History is very important to you. Is there any architectural period when you would like to have lived other than today?

Probably 1920s France because I truly love the period. Industry was in complete effervescence then. I certainly would have traveled to Austria, London and New York to partake in the global and glorious synergy of the era. Surely, I would have been great in Les Années folles!

5. You travel between many places, where would you like to work or live next?

I would very much love to work in Brazil and Japan. These are countries with distinct cultures and limitless potential.

Find This Book on 1stDibs