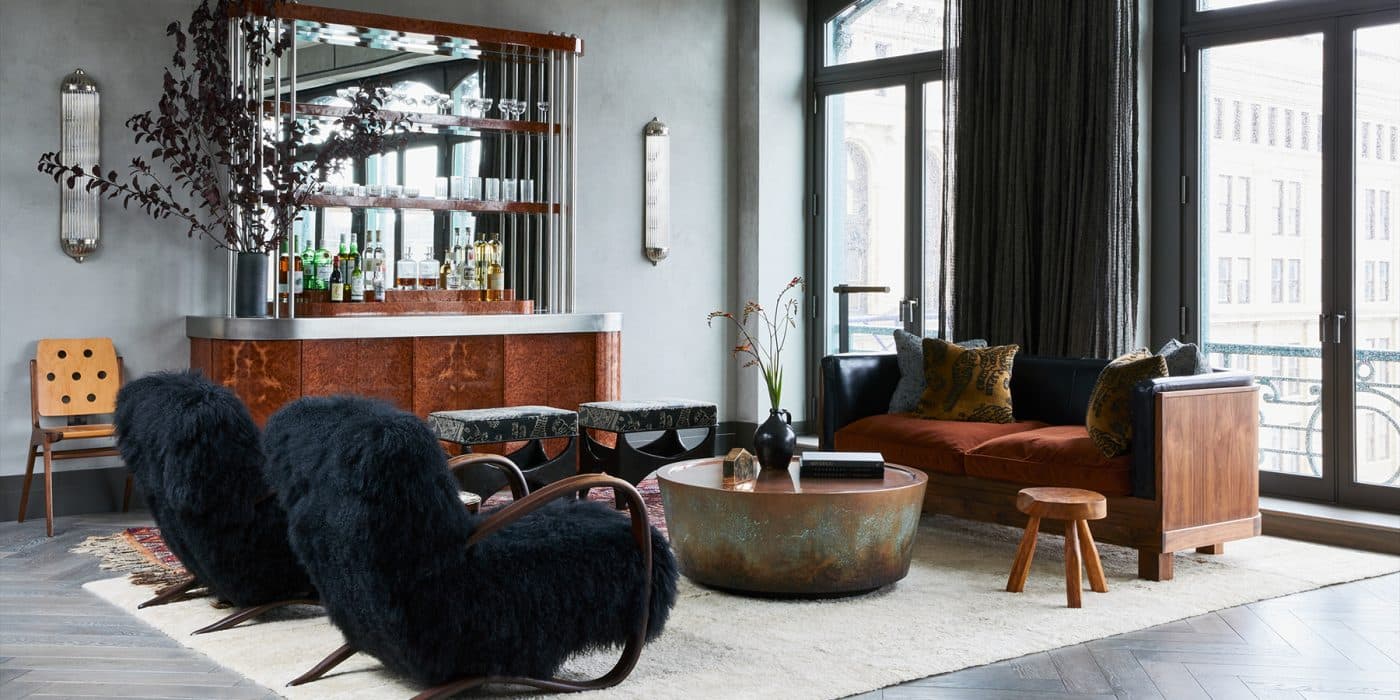 May 23, 2021When a bachelor financier bought a penthouse loft in need of transformation in New York’s Soho, it would have been easy to strip the space down to a raw concrete shell, cart in some modern furniture and call it a day. Instead, he asked Amanda Jesse and Whitney Parris-Lamb, the founders of the Brooklyn-based interior design firm Jesse Parris-Lamb, to reimagine it. After listening intently to their client, the pair devised a design scheme that was bravely original.

“The client wanted an industrial-feeling loft that was related to the history of the neighborhood while also being future-oriented, modern and opulent,” recalls Parris-Lamb. A typical artist’s loft of concrete, steel and beaten-up wood wasn’t going to cut it, she says, because the owner is a bon vivant who specifically requested a showstopping home where he could entertain guests multiple times a week.

“The client is an incredibly fun, over-the-top guy who loves to cook and entertain,” says Parris-Lamb. “He wanted us to create an amazing party pad where he could host a variety of events — dinners, cocktail parties, lectures — while also being comfortable living day-to-day.”

That the owner’s favorite New York architectural icon was the Chrysler Building helped drive the design of the project. “We did a ton of research into Art Deco design and detailing,” says Parris-Lamb. “We pulled motifs, forms and materials and incorporated them into a number of custom design elements to soften the harsher industrial bones of the space.”

“Along with the Chrysler Building, we looked at a lot of books and vintage pieces from early-twentieth-century OG designers,” adds Jesse. “Charles Dudouyt, Jean-Michel Frank, Franz Schuster, Paul Frankl.”

They used that research as a springboard to design a luxurious 3,000-square-foot home filled with uncommon details that mix Art Deco influences with contemporary industrial style. Fluted elements, for instance, abound. “In our research, we came across many varied uses of fluting from the Art Deco period — in wood, stone, metal and glass — at a variety of scales, from cigarette cases to armoires,” says Parris-Lamb. “We wound up deploying this motif throughout the apartment.”

After blowing out existing interior walls to open up the space, they added a few fluted-glass partitions adorned with curved steel grilles inspired by the designs on Art Deco rugs. For the custom bar, they designed a cabinet with exaggerated, oversize fluted doors. As the centerpiece of the kitchen, they created an island with fluted metal sides and a capsule-shaped top of Calacatta Macchia Vecchia marble.

“The form and material of the kitchen island came from a vintage cocktail shaker, scaled up,” Parris-Lamb says, pointing to a similarly sculptural shaker designed by Folke Arström in the 1930s. “The blade-style foot was inspired by the bottom of a vintage serving bowl.”

In the main bathroom, they designed a custom vanity that riffs on a dresser by Paul Frankl. While Frankl’s piece has a cork top, they used thick-edged Paonazzo marble. And instead of the original’s high-polish mahogany, they used matte white oak in two finishes, light and dark.

“It’s a true loft, so the bathroom is open to the bedroom,” says Jesse. “The vanity was designed to look more like a piece of furniture than a bathroom cabinet since it was visible from other areas of the apartment.”

Doors throughout the apartment, each with a paneled detail that terminates in a point near the floor, are an homage to the front doors of the Chrysler Building, but are rendered in gray paint rather than the skyscraper’s chromed metal. For furniture, Jesse and Parris-Lamb mixed vintage pieces, including living room armchairs by Jindrich Halabala and dining chairs by Charles Dudouyt, with custom pieces inspired by the past, like an upholstered folding screen reminiscent of a vintage parchment example designed by Aldo Tura (who had himself taken inspiration from Jean-Michel Frank).

Yet the designers didn’t limit themselves to any one period or style, or even geographic location — they pulled liberally from a wide range of 20th-century design greats to realize something far more eclectic than a period interior. Later modernists are represented by such pieces as a sideboard by the Italian architects Afra and Tobia Scarpa, python-covered tables by the American furniture designer Karl Springer and a Brazilian Costela chair by Martin Eisler and Carlo Hauner.

Still others are referenced in selective touches used to warm up the loft’s raw architectural envelope. After revealing the space’s previously concealed concrete columns, the designers wrapped some sections with leather cord, paying tribute to Alvar Aalto’s rattan-clad columns at the 1939 Villa Mairea. “Each column is individual and features a slightly different hand-wrapped leather composition and placement,” says Jesse.

Many interior walls are concrete, but it’s no ordinary concrete — Jesse and Parris-Lamb commissioned a plaster artist to apply the finish, giving it a gauzy appearance that wouldn’t be out of place in a Belgian country house. Instead of opting for the rustic warehouse-style flooring so common in other lofts, they installed elegant gray-stained oak, in a herringbone pattern in public areas and in straight planks in private rooms.

In the end, it’s a home full of winks and nods to landmark 20th-century design, but also one that comes across as utterly fresh. If it doesn’t fit neatly into most people’s definition of a Soho loft, that’s exactly the point. “Most people have seen a lot of industrial spaces, and we were excited to find a new spin and avoid ‘industrial fatigue,’ ” says Jesse.

That aligned perfectly with the desires of a client who demanded something exceptional. “Often, ‘industrial’ is interpreted in interior design as pared down,” says Parris-Lamb, “and this guy is absolutely not a minimalist.” 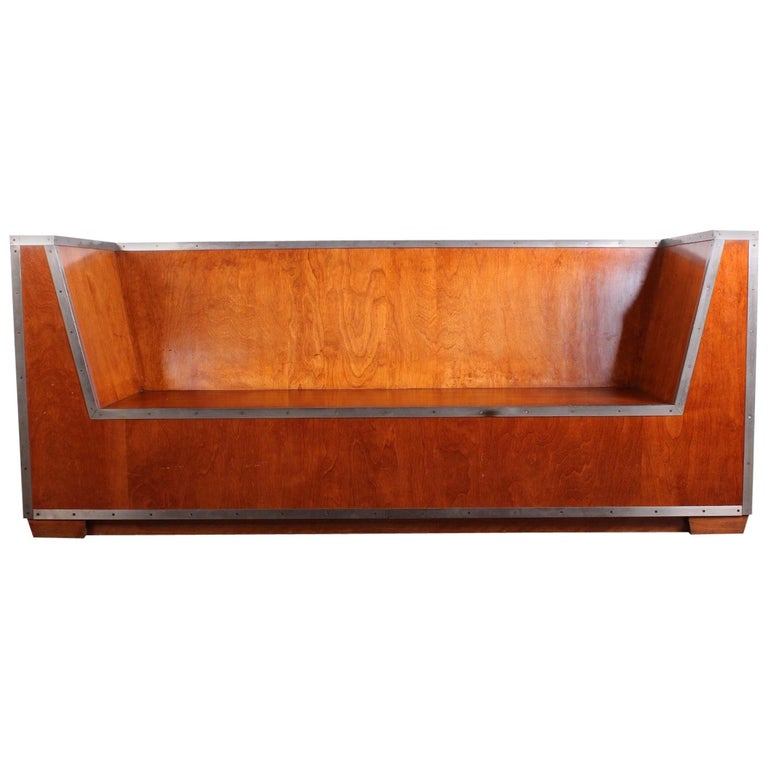 “We’re fascinated by how pervasive Art Deco was in its time and how long it’s lasted. This walnut sofa is something of an inflection point. When Paul Frankl designed it for Chicago’s Century of Progress exposition in 1933 — the last gasp of the skyscraper boom — he updated a traditional Art Deco form with Chrysler Building–esque nickeled-brass mounts and the clean lines of the mid-century styles to come. It’s definitely a daring, forward-thinking piece of furniture! It’s perfect to float in a loft, perhaps paired with a couple of cozy Jean-Michel Frank mohair armchairs.” 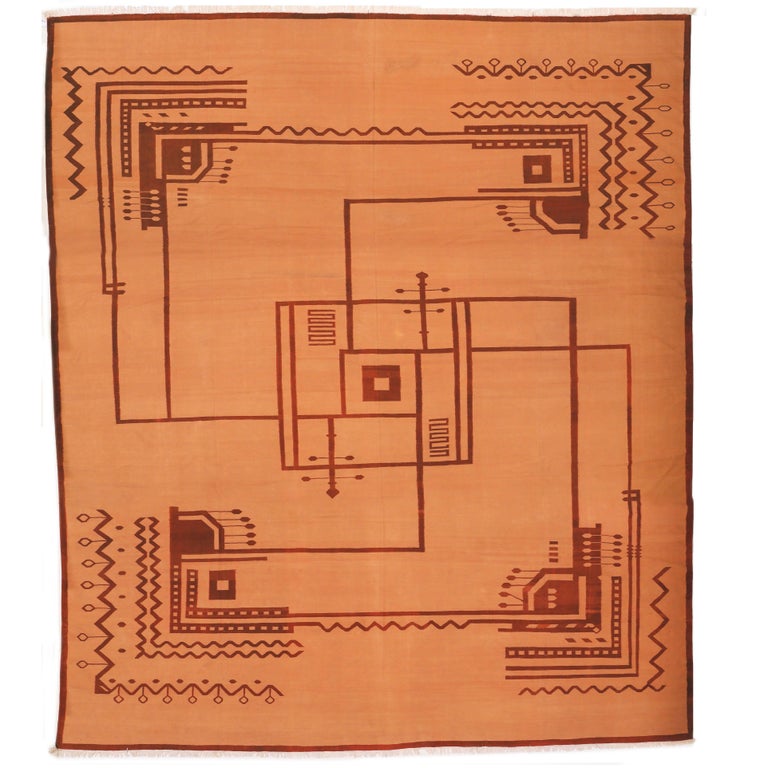 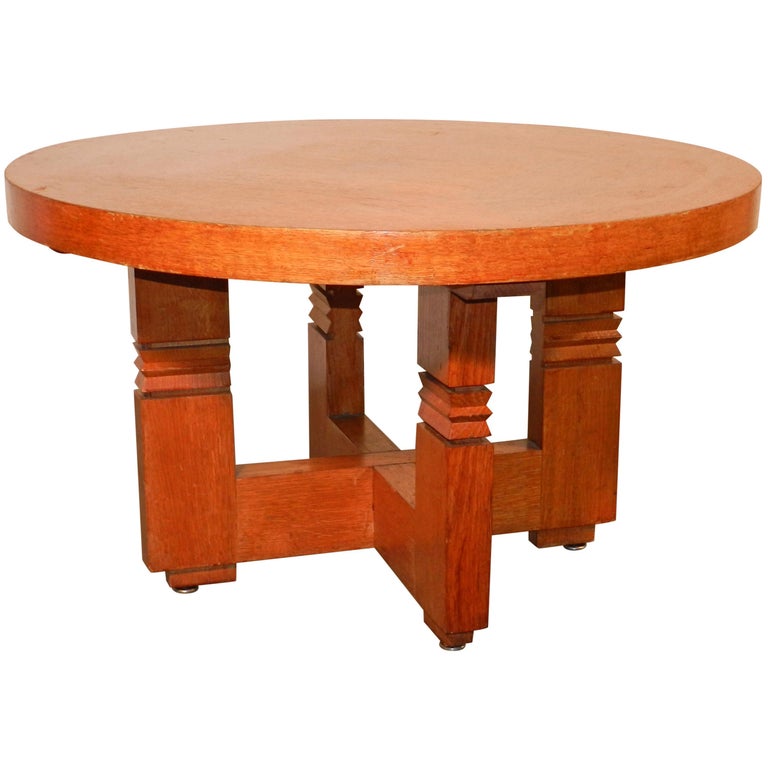 “Oh, man, we love this guy! Charles Dudouyt transcended Art Deco. He had a way of embellishing chunky proportions with elegant carvings that is unmistakably his own. This oak cocktail table has presence. It’s not going anywhere when the party’s over.” 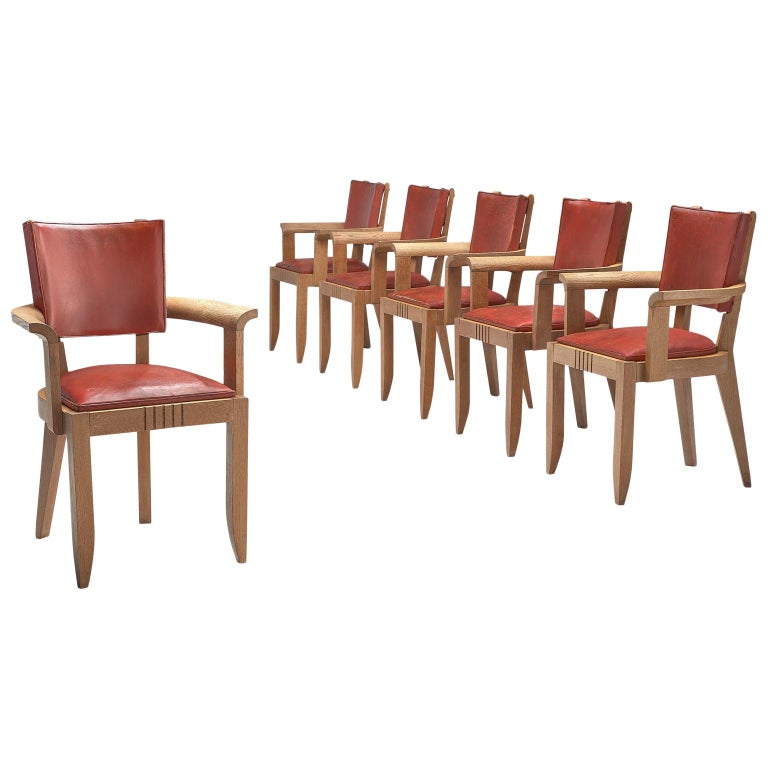 “Charles Dudouyt strikes again! These dining chairs are stunning: robust, beefy and incredibly comfortable, yet also light on their feet. You can’t get new leather with that kind of patina. Even the European oak frames have a rich, warm tone that’s hard to find in new-production furniture.” 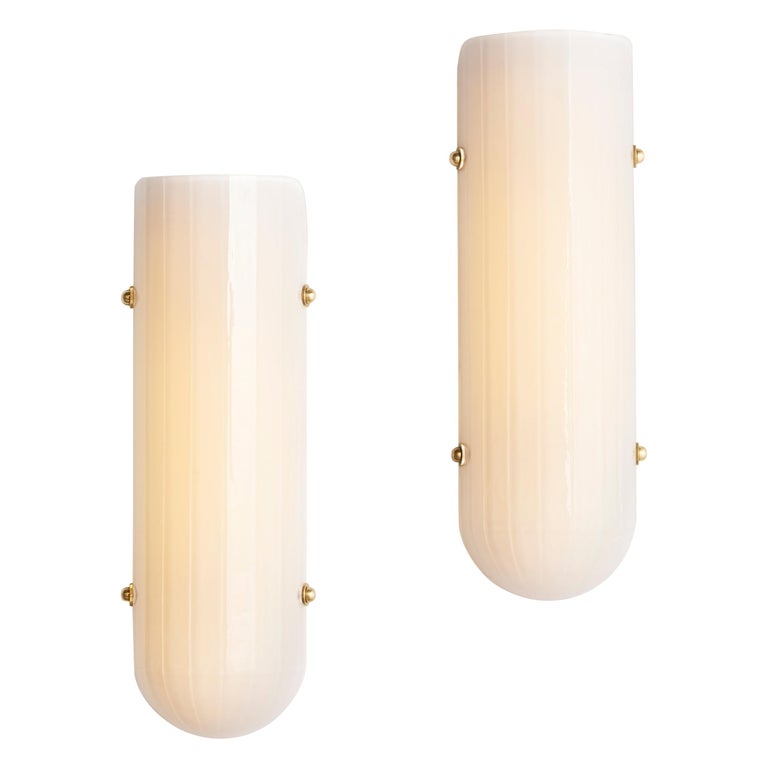 “So much of contemporary design references Art Deco. This blown-glass sconce has the curvilinear form and fluting, but in an abstracted, modernized way. The minimal metal hardware means it casts a really pretty, ambient glow.” 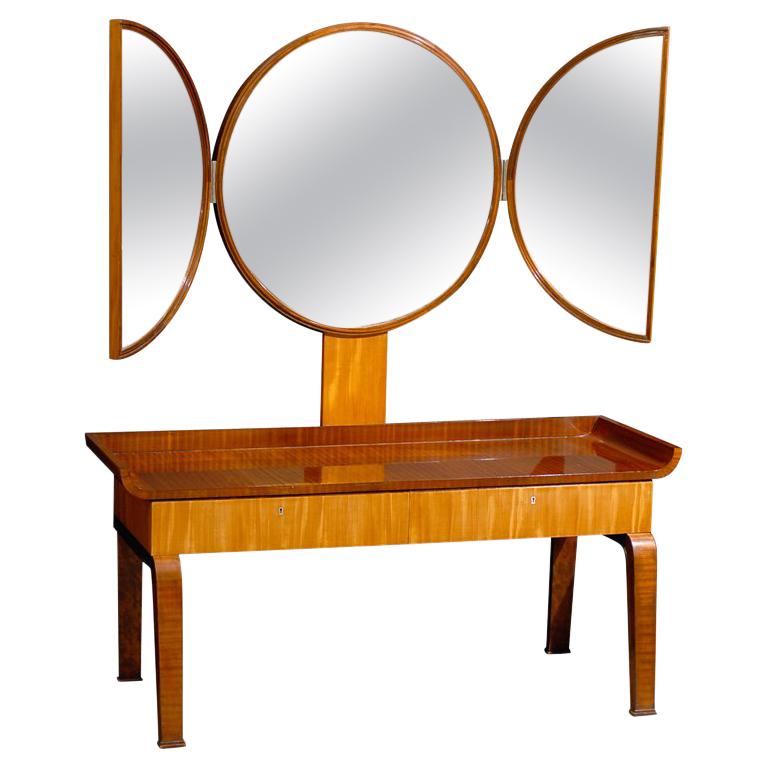 “The two-tone wood on this Swedish Art Deco vanity is incredible. Picture Ingrid Bergman perched before it on a stool, blotting her lipstick. A dedicated space to get ready in the morning that’s not the bathroom sink is the ultimate luxury. Especially in New York City.” 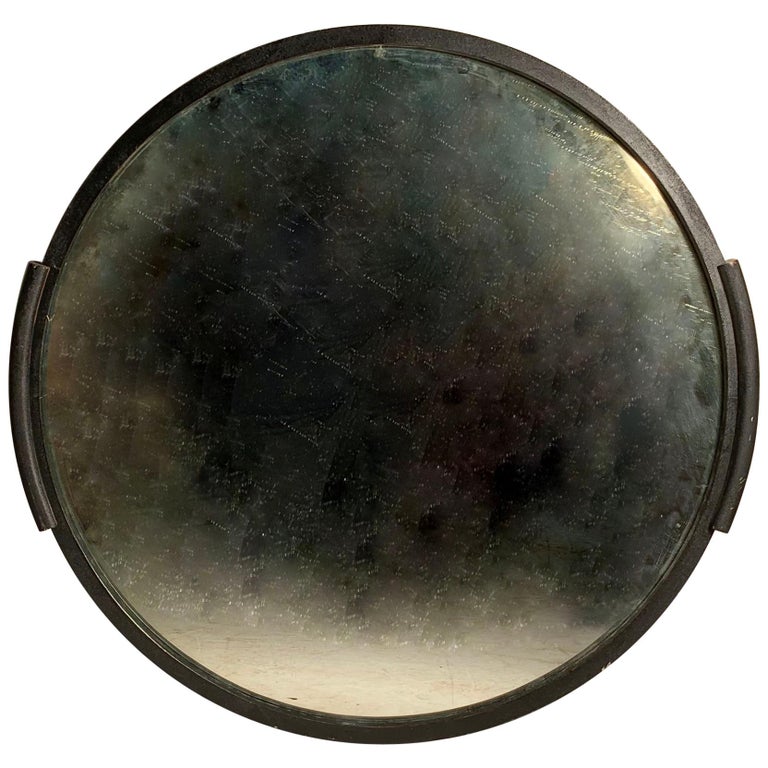 “Decorative mirrors clouded with age feel dressier, and they brighten a space without being jarring. They can go anywhere, practically, and even create zones in an open space. We used something similar in this project. The long loft kitchen bleeds into the entryway. The mirror is like a comma, separating one idea from the other.” 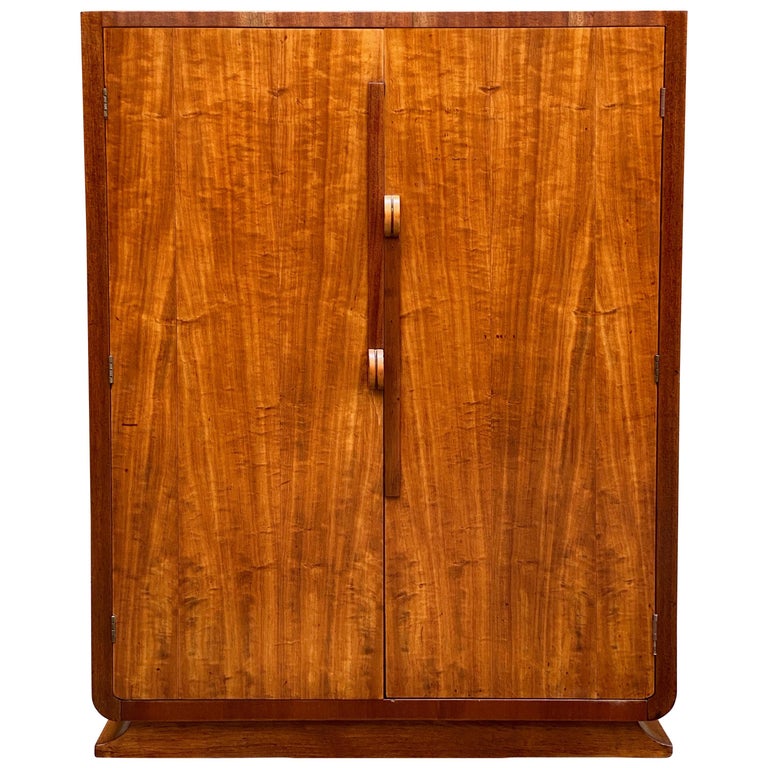 “Old furniture tends to be built at a smaller scale that’s great for apartment living. The doors on this dresser mean it can go anywhere without overwhelming the space — in the living room for board games and blankets, in the dining room for cutlery and linens, in a home office. That asymmetrical wood hardware is just gorgeous.” 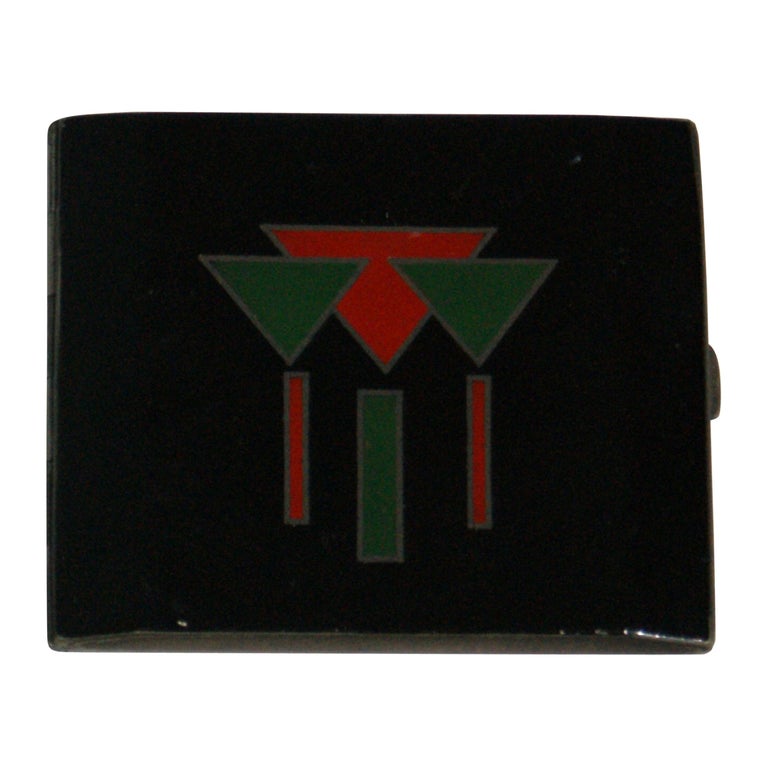 “At its peak, Art Deco design was everywhere, from fine furniture to glassware to toasters! The red-and-green motif on this lacquered-silver cigarette case is really striking. While we’re not condoning smoking, we could see this being used to stash business cards.”