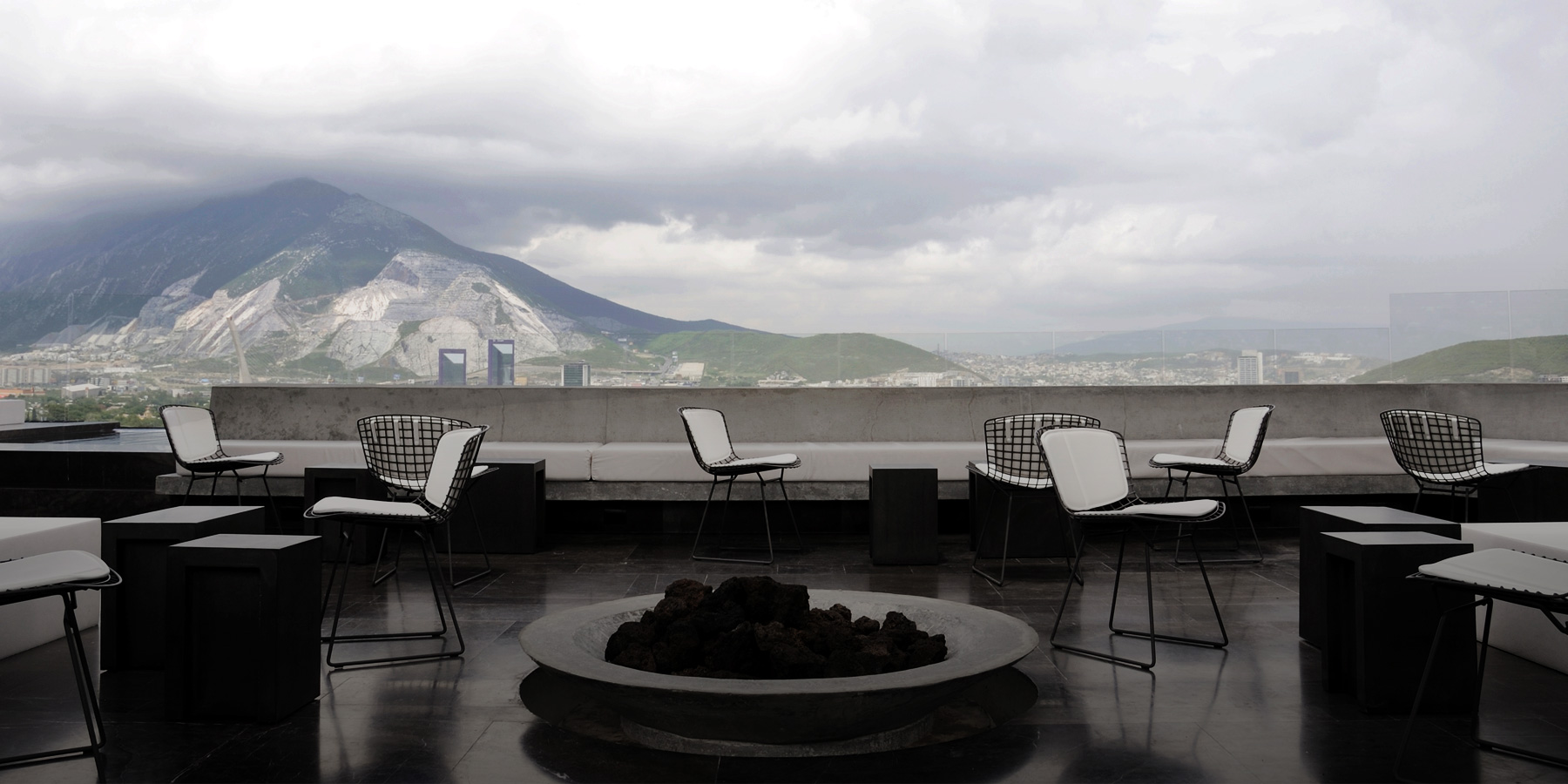 Hip hotels in Mexico, luxe restaurants in Paris, stores for Alexander Wang and Rick Owens: this French interior designer Joseph Dirand and his sleek, graphic aesthetic is very much in demand. 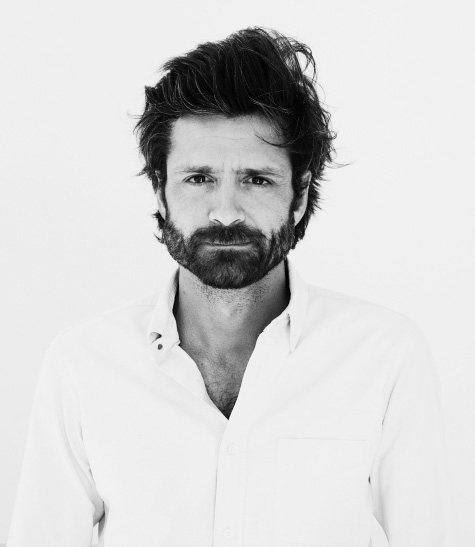 The architectural education of Parisian interior designer Joseph Dirand began at an early age. His late father, Jacques Dirand, was a photographer who worked extensively for shelter magazines, in particular The World of Interiors. Dirand still clearly recalls family trips to see such iconic buildings as Le Corbusier‘s Notre-Dame du Haut chapel, in Ronchamp, France, and hearing about his father’s travels to places like Mexico City, where he shot the house of Luis Barragán, with the legendary architect himself in situ. He also remembers the ritual after each shoot: A courier would deliver the developed film, and Jacques would study it carefully using a light box on the dining table. “Once he’d made his selection, we were allowed to look,” Dirand recently recalled. “Each project was more fantastical than the next.”

Fast-forward to today, and Dirand is a design star in his own right. He has received residential commissions from some of the leading names in French business and created stores for Pucci in New York, Chloé and Balmain in Paris, Rick Owens in London and Alexander Wang in Beijing. His concept for Givenchy was inaugurated last November with the opening of a boutique on Paris’s Avenue Montaigne. As Marie Kalt, the editor of French Architectural Digest, notes, “His progression over the past five years has been spectacular.”

Other recent projects include L’Apogée Courchevel, a ski hotel in the French Alps, designed in tandem with India Mahdavi, as well as one of Paris’s most stylish new restaurants, Monsieur Bleu, which sits in a grand space in the renovated and reopened 1930s Palais de Tokyo. There, Dirand worked with 30-foot ceilings, velvet banquettes and ultra-stylish green marble. Next up will be the interiors of the Surf Club Hotel, in Miami Beach, where Dirand will be in good company: Richard Meier is handling the architecture for the reimagining of this 1930s Mediterranean Revival icon on Collins Avenue. 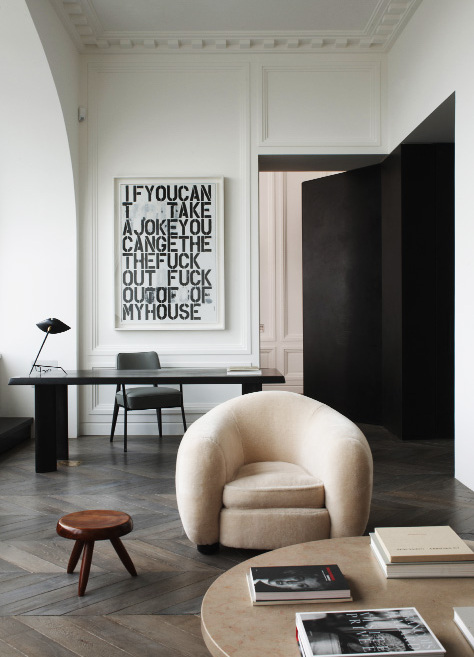 For an apartment in his hometown of Paris, Dirand combined mid-century pieces by Jean Prouvé (armchair and coffee table), and Charlotte Perriand (stool) with a contemporary painting by Christopher Wool.

Dirand’s style is almost instantly recognizable, characterized by strong lines, impeccable proportions and breathtaking precision. “The way he treats and defines space is very clean,” says Mahdavi. “He’s created a language of his own by reinventing traditional French decorative elements in a contemporary way.” Kalt agrees, saying, “It’s the meeting of classicism and minimalism. There’s both a Cistercian touch and great elegance.” And as Gilles Malafosse, owner of the Palais de Tokyo’s Monsieur Bleu, points out, “One of the main characteristics of his work is the absence of anything superfluous.”

Looking at Dirand’s design projects, you might imagine him to be serious, cerebral and even a little ascetic — a sort of meticulous figure tucked into a crisply tailored Dior Homme suit. In reality, he’s quite different. When it comes to fashion, he generally favors a sweater and jeans, and his hair is almost always disheveled. Malafosse describes him as “pleasure-seeking, sensitive and spontaneous.” For Mahdavi, he is “supercool, very easygoing.” And, indeed, when speaking in person, Dirand proves himself warm, youthful and generous. Those who know him well also note a more steely, determined side to his character. “When he has an idea, he sees it through to the end without making concessions,” says Kalt.

Born in Paris in 1974, Dirand grew up in a converted 1930s dance studio close to the Arc de Triomphe. His early influences were not solely architectural; he says he was also struck by the beauty of the gardens at Versailles and had acquired a taste for Minimalism and Arte Povera by the age of seven. “There was a form of violence and rigor in both movements, which fascinated me,” he explains. He started collecting design at the age of 17, buying a Jean Prouvé Standard chair for 300 French francs, and he avows a particular passion for the work not only of Prouvé but also of Le Corbusier, Charlotte Perriand, Pierre Jeanneret and Jean Royère.

“IT’S FURNITURE WHERE FORM WAS REPUDIATED IN FAVOR OF FUNCTION,” HE SAYS. “FOR ME, THERE’S SOMETHING ALMOST IDEOLOGICAL ABOUT IT.” 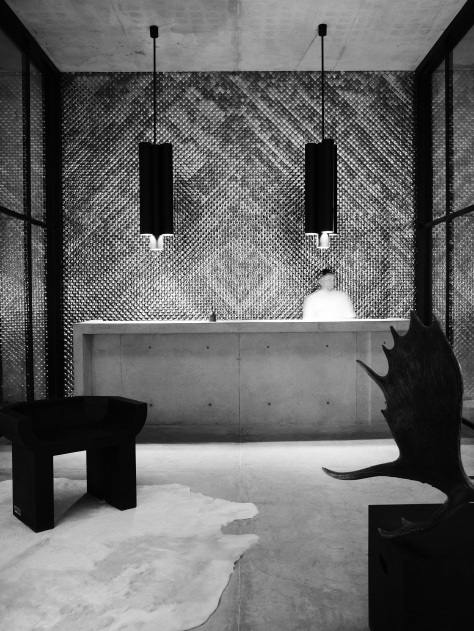 In the lobby of Mexico’s Hotel Habita Monterrey, a monolothic chair by designer Rick Owens holds pride of place in front of the reception desk.

In his youth, Dirand initially envisaged becoming an architect and obtained his license after studying at two different schools — Paris La Seine and Paris Belle-ville. Life, however, led him in a different direction. “You begin to work on things people ask you to do,” he says, “and when you’re twenty-three, people don’t ask you to design a building.” Instead, while still a student, he received a commission to create the interiors of a store in Paris for a friend of his parents, the Japanese fashion designer Junko Shimada, and the French edition of Elle Decoration published the first apartment he decorated for himself. In 1999, he set up his own firm straight out of school and made his mark in the mid-to-late 2000s with three strikingly graphic projects: the Habita Monterrey and Distrito Capital hotels, in Mexico, and a stunning apartment in Paris directly on the banks of the Seine. For each of these, he used a palette limited almost solely to black and white.

“I didn’t deliberately choose to work only with those colors,” he asserts. “But as a young designer, I was drawn toward minimalistic things and needed to create contrast to give my projects a certain force.” The black-and-white label is something he’s been trying to shake off ever since, as is the notion that his interiors are lacking in warmth. “On the contrary,” he insists, “people generally say that my work may be radical, but it’s also sexy.”

His aesthetic has certainly evolved over the past couple of years as he has started to work with softer, subtler hues. A prime example is the Chloé boutique, where beiges and pinks dominate. He’s also added more sensuality through his use of such rich materials as brass and bronze and, increasingly, sumptuous marbles, and he’s developed an interest in fabrics. “I hardly used them at all during the first fifteen years of my career,” he says. “Up until recently, I must have had a total of forty samples. Today, I have drawers and drawers.” 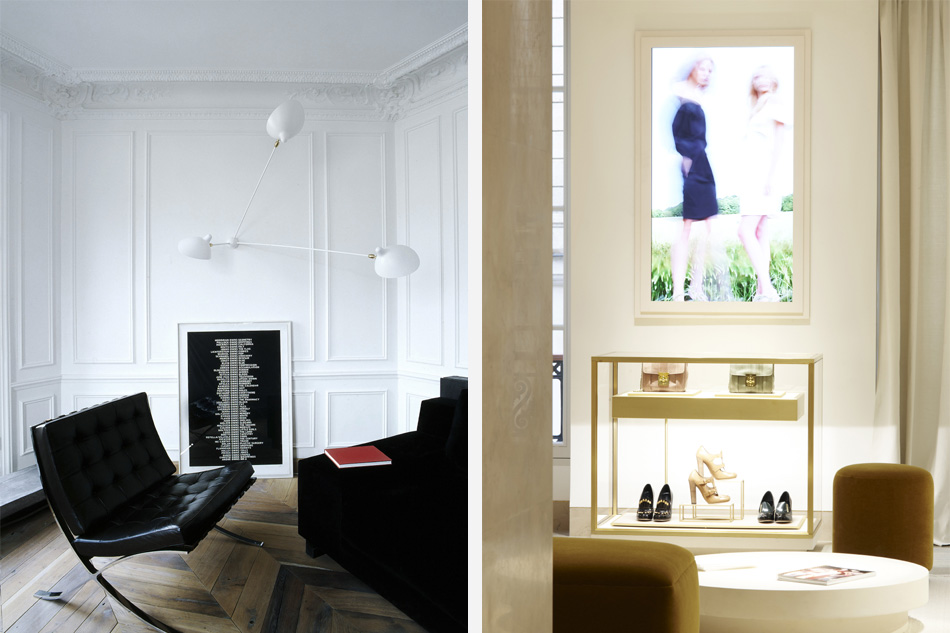 Left: In another room of the Paris apartment, a long-armed, wall-mounted lamp by Serge Mouille extends over a Mies van der Rohe Barcelona chair. Right: Dirand designed all the furnishings and fittings for Chloe’s new Paris flagship, which debuted in 2012.

His attachment to high-quality natural materials will no doubt help him accomplish one of his long-term goals: In 20 years, he wants his spaces to be even more beautiful than they are today.

Given his training, one question remains, however: Will he turn his hand to  architecture too? “I’d love to work on a project where there are lots of limitations and where the site is extremely complicated,” he admits. “Building a structure on a flat lot is not for me. I love constraints so much that without them, I fear I’d be lost.”