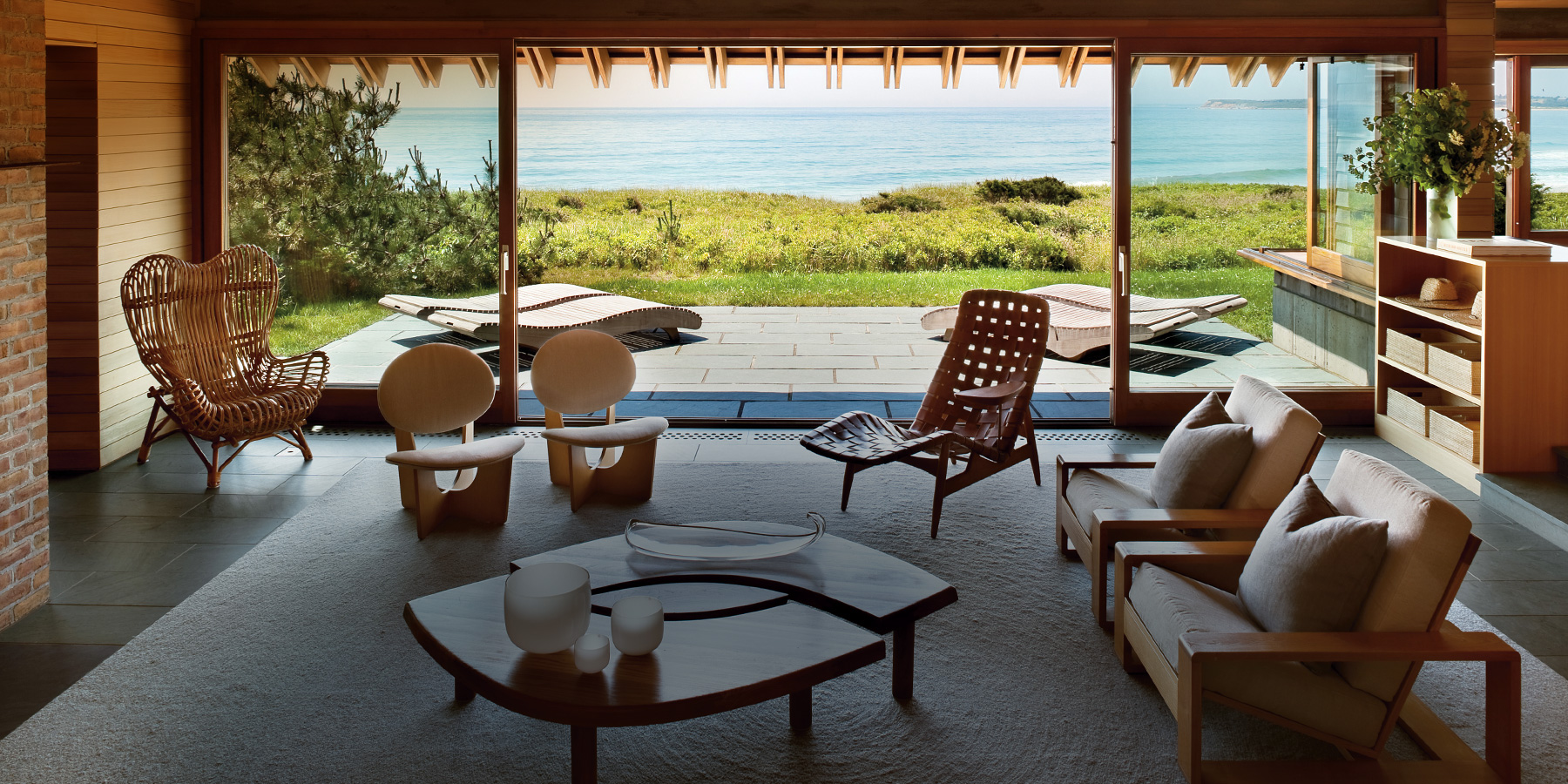 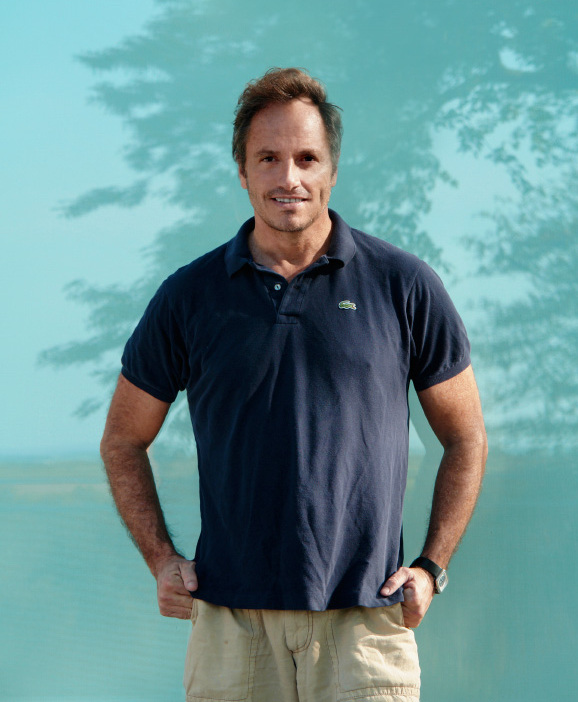 The recent publication by Rizzoli of Shelton, Mindel & Associates: Architecture and Design is cause for celebration. Those of us who have long admired the firm previously had to scour the pages of Architectural Digest and Elle Decor for examples of its exquisitely crafted interiors. But now, we have a whole book devoted to these “Modernists in Manhattan,” which is how Lee F. Mindel describes the firm he founded in 1978 with Peter Shelton, his buddy from their undergraduate days at the University of Pennsylvania. (Shelton died last August after a battle with cancer.)

Known for their lucid, clean-lined architecture and luxurious finishes, Shelton, Mindel counts among its clients Sting and Trudie Styler and members of the Soros, Tisch and Lauder families. The firm has designed the interiors of a Gulfstream jet, a 2,000-passenger cruise ship, a luxury condo on Manhattan’s Upper East Side (the Marquand, where apartments start at $15 million) and the corporate headquarters of Ralph Lauren. In the process it’s accrued 25 awards from the American Institue of Architects and the 2011 Cooper-Hewitt National Design Award for Interior Design, the industry’s equivalent of an Oscar.

Mindel himself is universally admired for his smart deployment of extraordinary 20th-century furniture and decorative objects, which “do not add up to a collection of correct but predictable pieces, or a showroom, or a diorama of Modernism suitable for a museum,” Joseph Giovannini writes in the book’s insightful essay. “The pieces may be notable for their rarity, signature and provenance, but it’s the unexpected yoking of disparate specimens that gives the rooms their presence.” Beautifully photographed, the monograph manages to capture the quiet, elusive qualities that always characterize the best designs. Mindel recently spoke with 1stdibs’ Anthony Barzilay Freund to shed even more light on his firm’s unique and — his favorite term — “rigorous” approach to architecture and interior design. 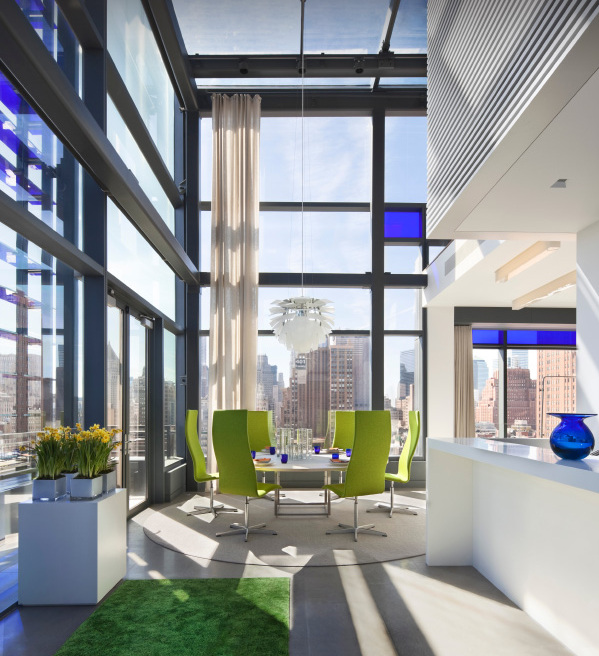 Shelton, Mindel & Associates, the renowned architecture and interior design firm, is the subject of a new book that spotlights the practice’s top projects, including this glass-encased duplex in Soho. All photos © Michael Moran/OTTO unless otherwise noted

What made you decide to finally compile a book of your emblematic projects?

I didn’t want to just do a coffee-table book with pretty pictures that wouldn’t give insight into what makes space transcend mere enclosure. I wanted to explain our process.

And there’s such a perfection to your “finished product” that one could assume you luck into commissions in these flawless, pristine spaces. It looks quite easy, actually, what you do.

Well, you can’t let people see you sweat, and you have to also make it seem as though the process is inevitable — as Alvar Aalto or Le Corbusier would say. But we wanted to share the journey of getting from A to B, so each project shown in the book is defined by its problem and its stated solution, and then each caption becomes a kind of footnote to the process. 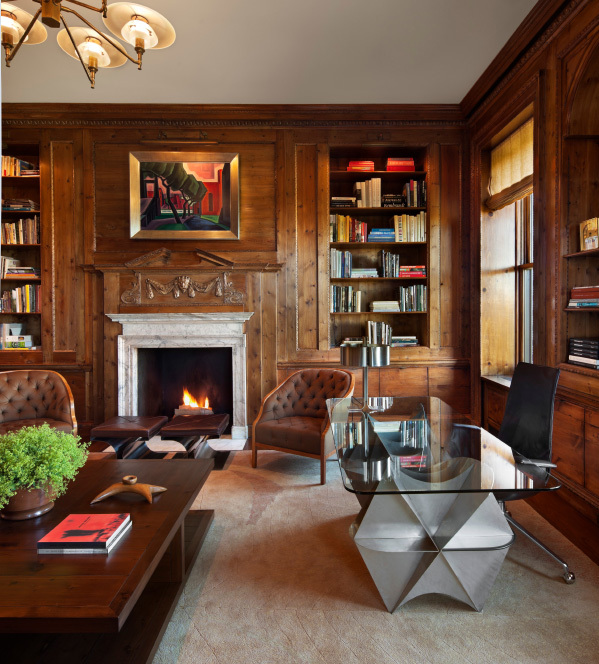 In a historic Fifth Avenue apartment building, the firm reworked the library’s paneling to hide the detritus — printers, file cabinets — of a modern-day office and introduced a steel butterfly desk by Tom Dixon to provide a sleek counterpoint to the room’s rich woods.

And I love that you include floorplans of each project, which often show how you’ve rationalized an unruly space. Overall, it’s a superb documentation of your firm’s output over two decades — your “house style,” if you will.

Architecture and interiors are often very ephemeral. They also speak of the time in which they’re created. So it’s wonderful to have been able to capture that. I don’t like the word “style,” by the way. You know, musical notes just convey a sound. They aren’t the music. I think architecture and design are like that too: style is just a word you use to express something that’s actually bigger than that.

Great design is not just the celebration of life and light; it’s the product of rigorous problem solving. In that way, too, it’s like a wonderful musical composition: it’s reined in within its structure — it has codas and themes that start and stop and reinforce each other. 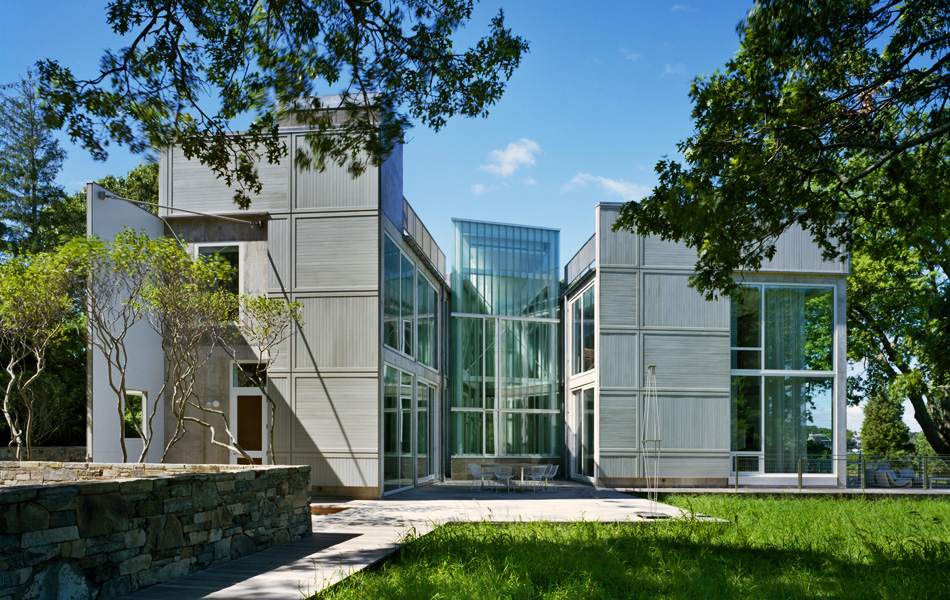 And then the poetry, or artistry, happens on top of that structure?

Yes, well, collaterally, not on top of. Just like words and music reinforce each other, architecture and interiors inform each other, too. And there has to be a kind of symbiosis that happens with it, because the two are stronger when united.

But a lot of people will work with an architect and then turn to somebody else for the interior design, which doesn’t always result in the most symbiotic of relationships.

And I think we’ve been able to bridge that gap, because architects look at the design one way and designers look at the architecture another way, and often the twain don’t meet. But with the great architectural works of all time, you can’t separate the two. Whether we’re designing a building, a site plan, a landscape or even a faucet — there has to be a relationship between the macro and the micro. This book tries to convey that. 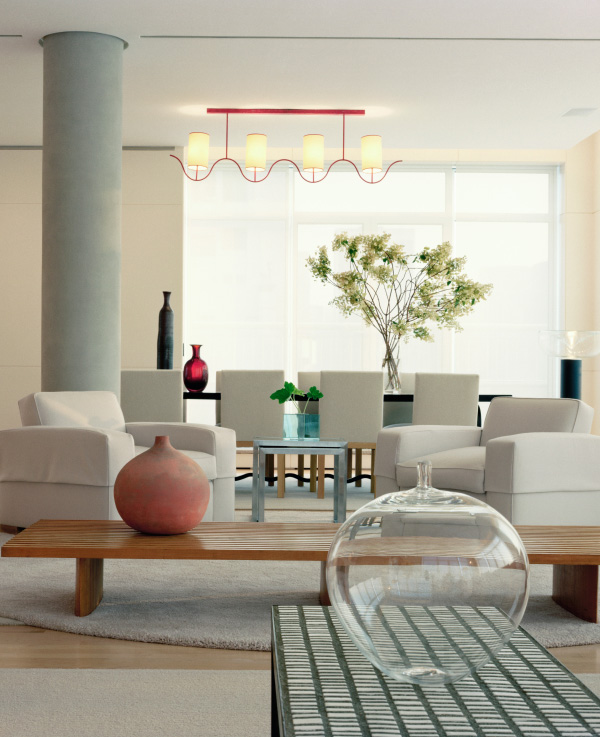 In a Fifth Avenue penthouse, a glass Apple vase by Ingeborg Lundin counterbalances a terracotta sphere by Jacques and Dani Ruelland, which sits atop a Tokyo bench by Charlotte Perriand. Photo by Michael Moran/Architectural Digest © Conde Nast Publications

I think you see that as you flip through the pages; it’s illustrated in the way a vase on a mantle enlivens an entire living room.

We feel like we’ve got to curate these spaces so that the gestures in here are not decorative, per se. They’re curated as objects in space.

Well the photos really convey that.

The photographer, Michael Moran, is a genius. He shot everything but one project, which was done by Peter Murdoch. And nothing is artificial; these haven’t been staged. They’re shown as they’re actually experienced.

How much give and take is there between your clients and you?

It’s completely interactive. We learn from every client. We’re really their students and they’re our teachers, and then we trade and we’re the teachers and they’re our students. And the unique thing about the relationship is that they’re not your friends. You come to the table to solve some problems and to make the space the best it can be by understanding who they are. 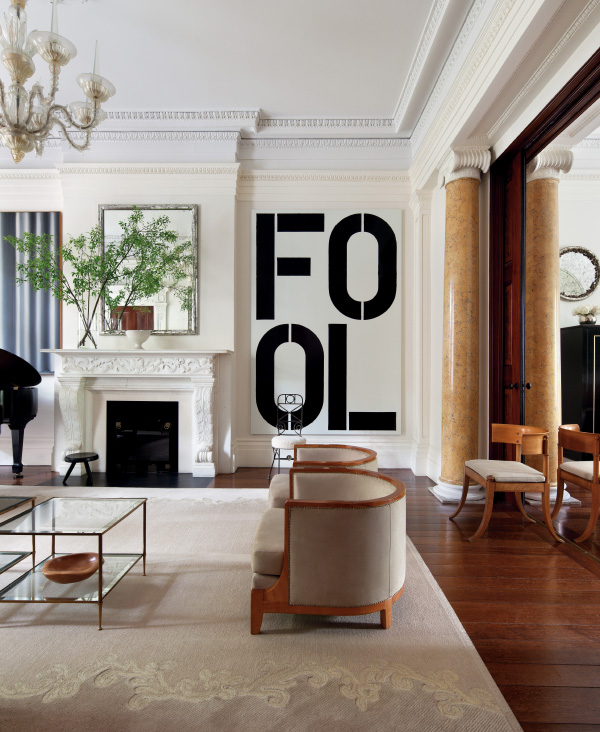 In an 1849 Greek Revival townhouse in Greenwich Village, the pair of chairs is by Jean-Michel Frank, the custom-designed rug from V’Soske and the Fool painting by Christopher Wool.

But in your “curating” of these spaces, does that mean editing out a lot of the things that your clients may initially bring to the project. Where are all the inherited clown paintings and much-loved tchotchkes?

People don’t usually come to us if they’re junkaholics. Most people are looking for organization, problem-solving, quiet, serenity, light, optimism, air, places to grow in.

And they don’t sneak in the tchotchkes after you’ve signed off on the project?

When each of these jobs is finished, I’d say that that’s when the space really begins to come into its own; we exit stage left and life begins. The Greenwich Village Greek Revival townhouse shown in the book was shot 12 years ago, and we reshot it last year. We used images from both those sessions.

So in the intervening dozen years they hadn’t screwed it up?

Well, they respected it, and they grew into it.

The art in that home is terrific. Did you help them curate it?

No, they did a great job on their own. They’re passionate about contemporary art, and the nice thing is that they inherently understood the scale of the building and what pieces would be appropriate where.

You’re known as a connoisseur of decorative objects from the 20th century. Tell me how you approach these pieces.

We’re very strict about who among the 20th-century creators were powerful thinkers with something wonderful to say. Because an object is not for the sake of decoration alone, it’s the idea that goes behind it. And I think if the inanimate object resonates with you, then it probably has potential to give life to your space.

And you don’t need a roomful of objects to create drama. With careful curation, can one object transform a room?

An object doesn’t transform a room. The room and the object transform each other. And I also think there’s a very interesting dialogue unique to American interiors among objects from lots of different backgrounds. The widow of [the great Danish furniture designer] Poul Kjaerholm once visited me in my New York City loft, and she started to cry. She said, “It’s so beautiful, it’s so welcoming. But why am I so moved by all of this?” And that’s when I realized that in Denmark — in most cultures, really — they are ethnocentric, they celebrate homogeneity. But we’re a political democracy and a design democracy in this country. And I said, “It was my honor to introduce your late husband to Jean Prouvé, Charles Eames, Antonio Gaudí, Le Corbusier and Giò Ponti — because they all deserve to be together.” 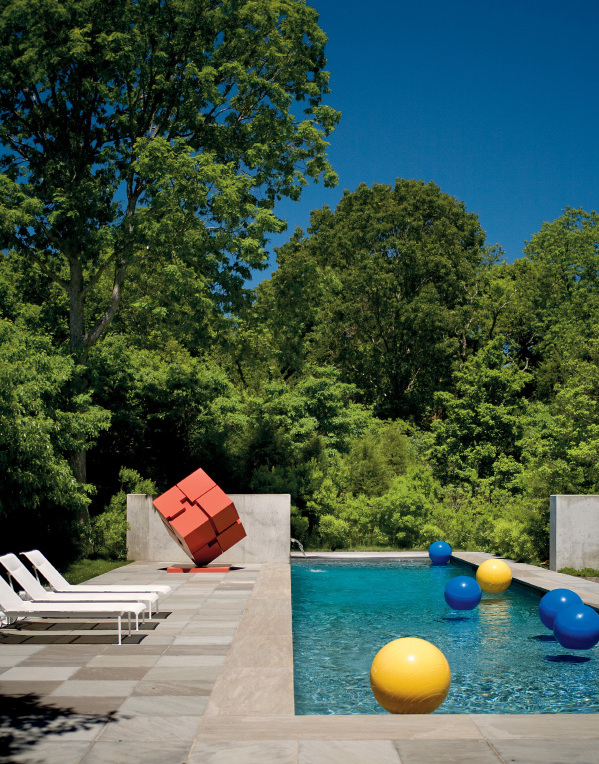 In Long Island, a kinetic cube sculpture by Tony Rosenthal sits in front of a concrete element that delivers water to the pool.

You’re a passionate photographer and you shoot a lot for your online column for Architectural Digest with its focus on buildings, art, artifacts and cultural phenomena that fascinate you.

You don’t have to own something to get pleasure out of it. When I take a picture, I form a relationship with the object. I actually feel the power of the object in the lens. And the way the light hits a drawing, a building, a tree, chair, ceramic, piece of glass…whatever it is, if I can imbibe it in my film, I’ll never forget it. You have to train your brain to see — and to hear, because objects will speak to you if you listen.

Back to the book: what did you learn from the project about yourself and about your practice over 20 years?

You don’t think you’re doing anything when you’re doing it. And then one day you look at all of it and you say, “Where did all that time go?” And you just can’t imagine, really, because I’m always interested in the next project, not the last.

And how did it shed light on Peter Shelton, who died as you were just embarking on the book?

It made me respect him even more, and I realized that there’s nothing I don’t look at and say to myself, “What would Peter think?” He was an original man, a deep thinker. And he was not superficial. He was constantly reminding me that we had to tell the truth in our designs. And that honesty and rigor is a thing that permeates every one of our jobs to this day. 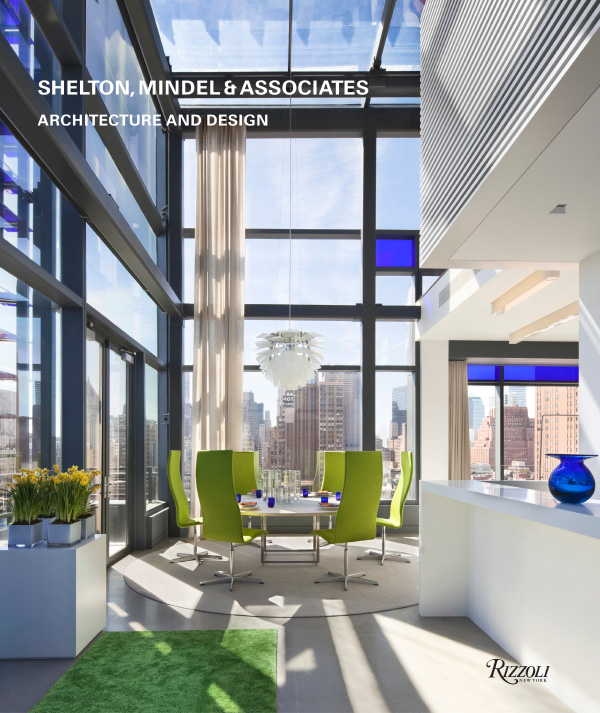 In addition to running a thriving architecture and design practice, Lee F. Mindel is an avid photographer. As he travels the world, he’s seldom seen without at least one camera slung over his shoulder and his distinctive images appear in a bimonthly column for Architectural Digest. Today, to celebrate the July 4th holiday, Mindel shares with 1stdibs images of a dozen of his favorite American buildings, from sea to shining sea.