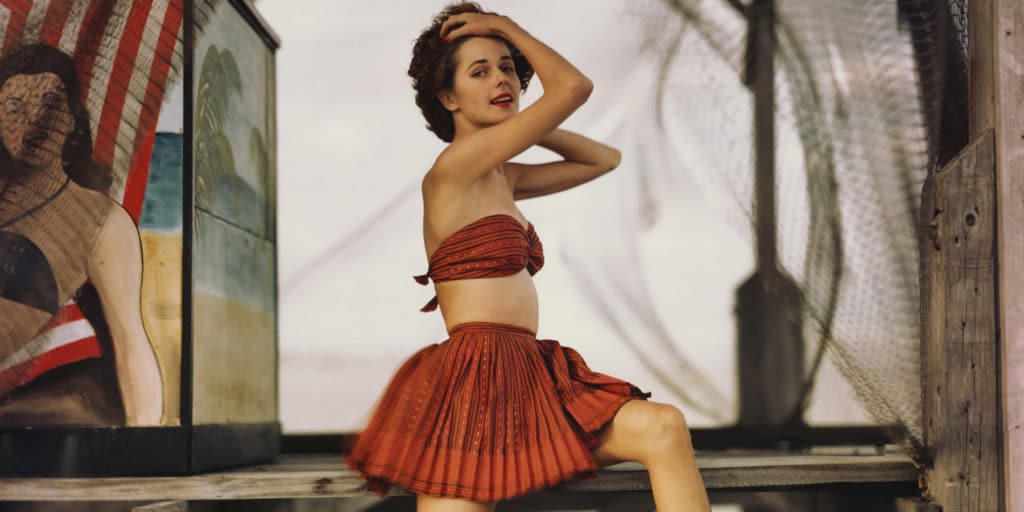 Leslie Gill and Frances McLaughlin-Gill shot for the biggest fashion magazines of the interwar and postwar eras. Now, Howard Greenberg Gallery in Manhattan is displaying their style-setting images side by side, for the first time. 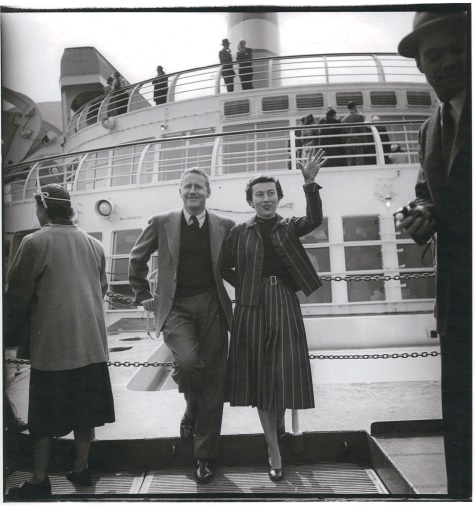 June 19, 2017Works by husband-and-wife photographers Leslie Gill and Frances McLaughlin-Gill — seen above departing New York for Europe on the maiden voyage of the S.S. Independent in 1951 — are on display in a new show  at New York’s Howard Greenberg Gallery through July 7. Top: McLaughlin-Gill shot model Carol McCarlson on a pier in St. Augustine, Florida, for Vogue in 1948.

Anyone who pored over the pages of mid-century fashion magazines would have known — and likely savored — the photographs of Leslie Gill and Frances McLaughlin-Gill. Gill’s portraits and enigmatic still lives frequently appeared in Harper’s Bazaar, where he had a long and fruitful association with Alexey Brodovitch, the magazine’s legendary art director. As for McLaughlin-Gill, while shooting as Vogue‘s first female contract photographer, she revolutionized the image of young American women, transforming them from demure crinolined debs into paragons of casual self-confidence.

When she went to work as Gill’s studio assistant in 1942, McLaughlin-Gill, a Connecticut-born photography prodigy, had already been a finalist in Vogue‘s Prix de Paris competition. A few months later, she got a call to work for Condé Nast, and he was called up by the U.S. Army. They met again and married after the war — there was an 11-year age gap between them —  and their careers together took off, flourishing in the heyday of postwar American style.

After Gill’s sudden death, in 1958, McLaughlin-Gill pursued a career as an independent filmmaker. She died in 2014. Now the couple are once again together in the spotlight in “Lives & Still Lives: Leslie Gill, Frances McLaughlin-Gill and Their Circle,” at New York’s Howard Greenberg Gallery through July 7.

In addition to displaying pieces by the couple — including, from left, Gill’s Composition with Watermelon, NYC, 1946; Dali’s Hands, NYC, 1948; and Composition of Objects on Windowsill, NYC, 1937 — the exhibition features photographs by several of the couple’s friends and contemporaries, Irving Penn, Erwin Blumenfeld, Louise Dahl-Wolfe, Gordon Parks and Man Ray among them. 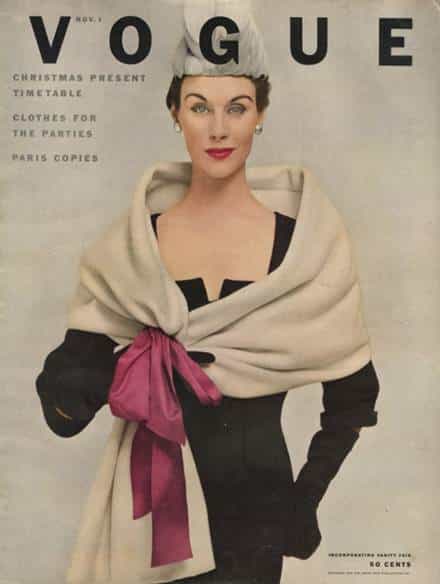 McLaughlin-Gill, who was Vogue’s first female contract photographer, took the image that appeared on the cover of the magazine’s November 1, 1952, issue.

The exhibition was organized by the independent curator Elisabeth Biondi, who was the inaugural visuals editor at the New Yorker, appointed in 1996 by Tina Brown to oversee photography, then a relatively rare medium in the magazine’s pages. The show, the first to display the two photographers’ work side by side in a gallery setting, presents a trove of nearly 60 photographs taken between the 1920s and ’60s by the couple and their colleagues, including Irving Penn, Erwin Blumenfeld, Louise Dahl-Wolfe, Gordon Parks and Man Ray.

The impetus for the exhibition came from the couple’s daughter and only child, Leslie Gill, born three months before her father’s death, who maintains their archives. “I feel that it’s a really timely moment to reintroduce their work,” says Gill fille. During the period covered by the show, she points out, photography was changing rapidly, much as it is now, buoyed by the development of advances like the strobe flash, small lightweight cameras and high-speed film, all of which made it possible to capture sequential images and convey a sense of movement in many different light levels. New York was also something of a global village, filled with refugees who’d arrived during the war, she adds, which led to “an environment of experimentation and new ideas. It was a time when social change and technological change had a very positive outcome.”

A feeling of New York’s being a vibrant creative village is evident throughout these pictures, which often share themes and subject matter. There are still lives with watermelons by Penn and Gill père made in 1947 and ’48; and compositions comprising pyramids, triangles and rounded objects like eggs, glass ovoids or erasers by Paul Outerbridge Jr. ( 1932), Gill (1937) and Penn (1985). On the fashion end of the spectrum, McLaughlin-Gill, Norman Parkinson and Louise Dahl-Wolfe photographed women walking dogs or surrounded by mirrors in the early 1950s  (although McLaughlin-Gill’s pictures always look the least posed.) 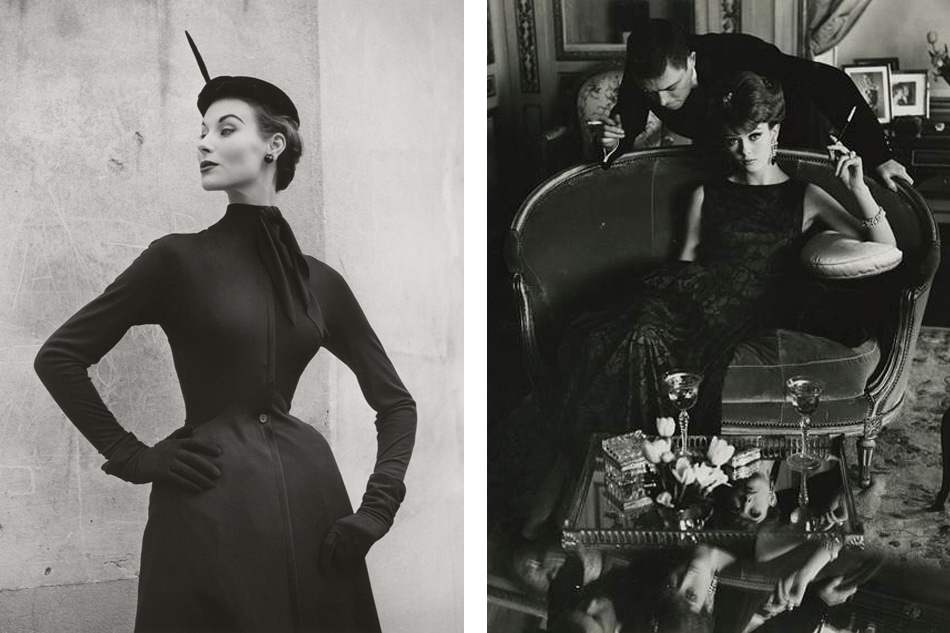 Left: In a 1952 photograph by McLaughlin-Gill, model Myrtle Crawford wears Dior in a courtyard off of Paris’s Rue de Vaugirard. Right: A gelatin silver print made by McLaughlin-Gill in the 1960s shows a couple in an opulent living room. 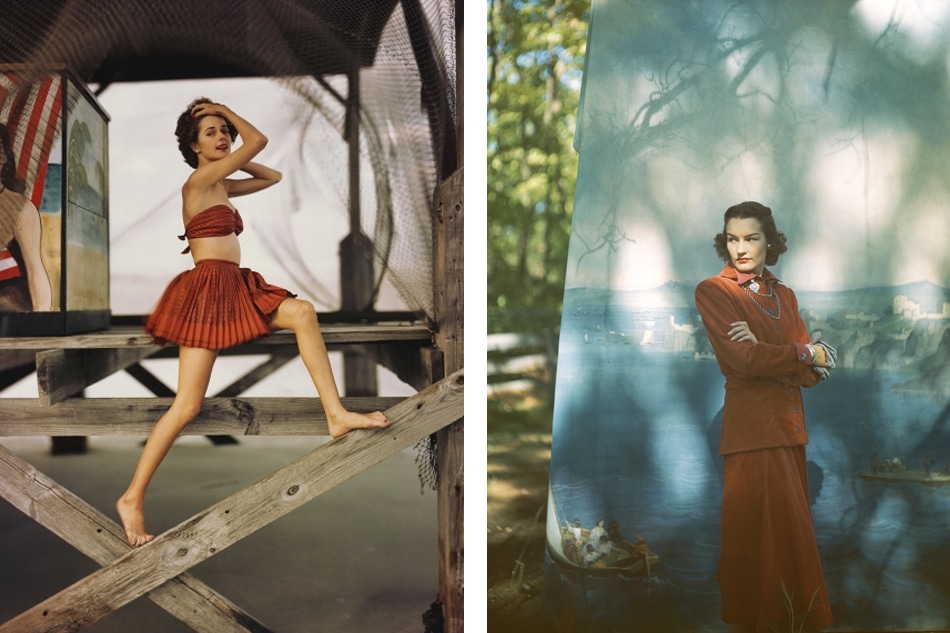 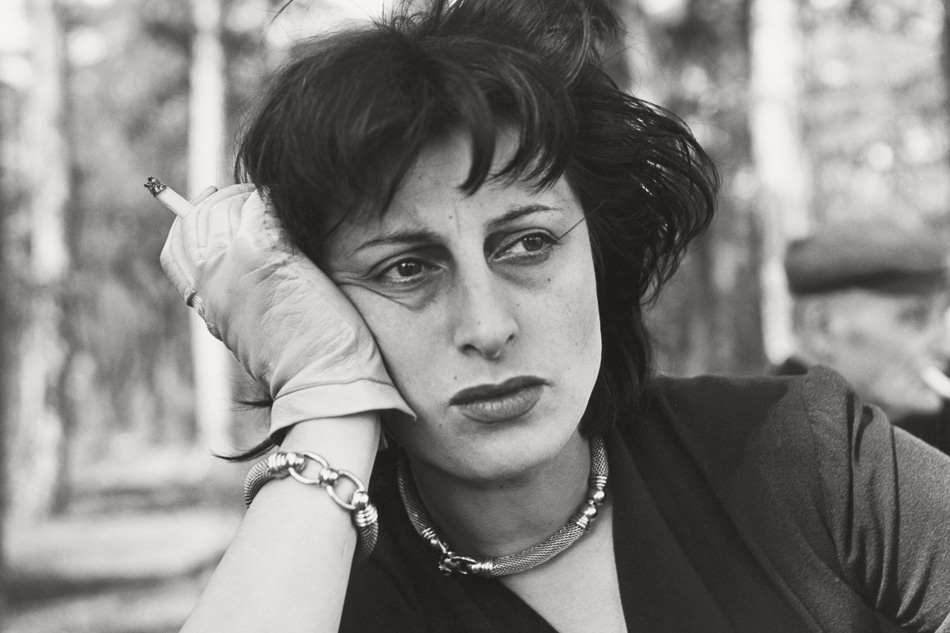 Gill photographed Italian actress Anna Magnani in 1941 as part of series he made of artists, aristocrats and celebrities in Rome. The portraits look as relaxed and unposed as those for which his wife was known. 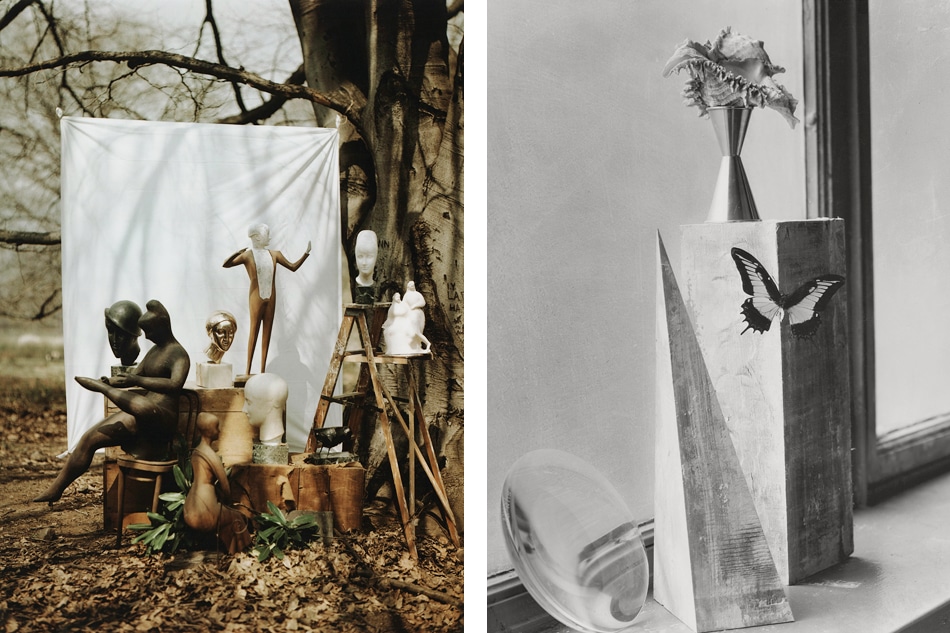 Gill shot the garden of sculptor Elie Nadelman (left) in 1948 and this composition of objects on a windowsill in 1937. 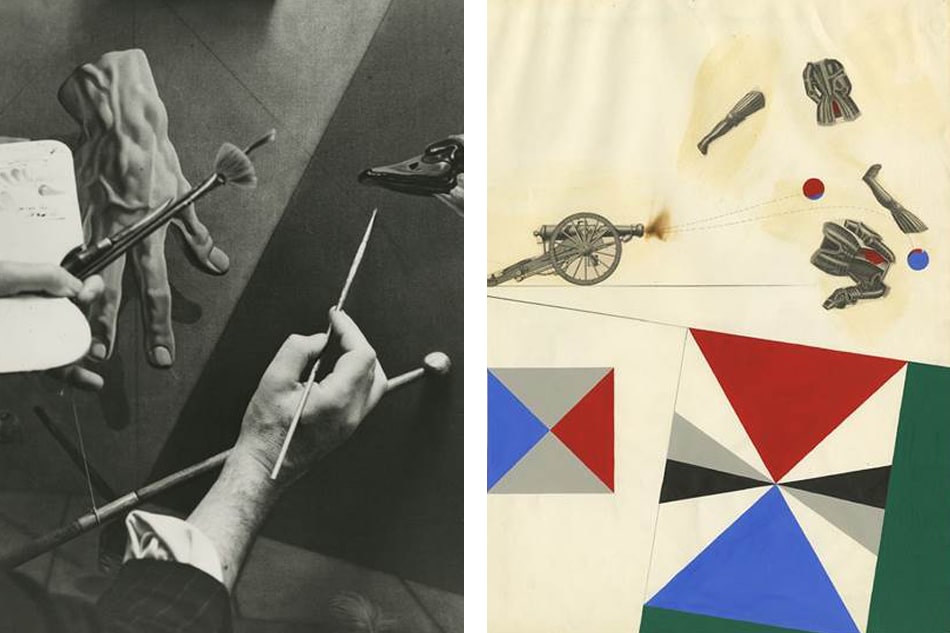 Left: The hands of Salvador Dalí — both physical and painted — were the subject of one of Gill’s photograph from 1948. Right: He made this untitled collage in 1937.

The show is the first gallery exhibition to display side by side the work of husband and wife mid-century photographers Leslie Gill and Frances McLaughlin-Gill.

One section of the exhibition demonstrates how the real lives of the photographers included in the show intertwined. It’s filled with snapshots and portraits taken by and of friends and family members like Penn and his wife, the fashion model and photographer Lisa Fonssagrives-Penn; and McLaughlin-Gill’s twin sister, Kathryn Abbe, another photographer married to a photographer, James Abbe, Jr. One 1940–41 snapshot shows McLaughlin-Gill painting en plein air by the Brooklyn Bridge with her painting teacher, the social realist Reginald Marsh.

McLaughlin-Gill’s turned her interest in realism and her ease on the street into her timeless calling card: a knack for photographing young women outside the studio, in natural and urban environments. Many of her pictures appear strikingly contemporary, like a 1948 photo of the model Carol McCarlson wrapping herself in a fluffy pink towel on a Florida beach and a 1946 black-and-white shot of the model Mary Tice striding down a grimy stretch of Third Avenue looking like a Girls cast member (though much better dressed). 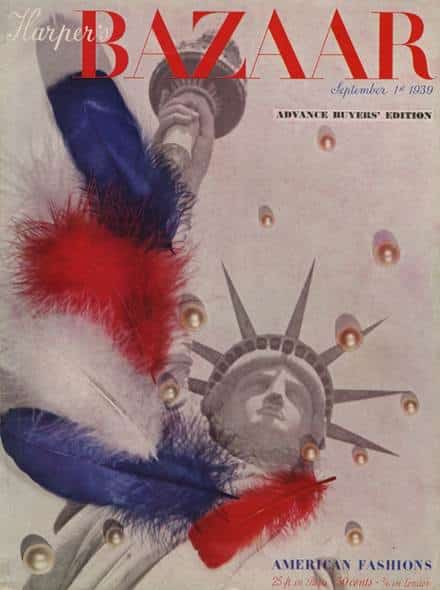 Despite its use of red, white and blue, the composition Gill created for a September 1939 cover of Harper’s Bazaar celebrates Labor Day, American fashion and patriotism in an unexpected way.

Gill, for his part, was a master technician, especially impressive given that he was entirely self-taught. Although he’d wanted to be a painter, he found work during the Depression as the art director of House Beautiful at a time when photography was overtaking illustration. He began making photographs himself when he couldn’t find anyone to take the shots he sought. He soon became an expert, among the first to work with the strobe and to test Kodachrome and Ektachrome film for Eastman Kodak. He opened his own commercial studio in 1935, doing shoots for Life, Town & Country and other magazines, as well as Harper’s Bazaar. But he made noncommercial work, too, including many of the deftly lit, precisely rendered arrangements of sculptures, fruit and vessels in the Greenberg exhibition.

Although Gill is known as the father of American still-life photography and McLaughlin-Gill for capturing young women in cinematic action in the street, their photographs displayed here often look strikingly similar — even those taken before they married. The show includes several of Gill’s gorgeously lit 1940s portraits of artists, aristocrats and celebrities done in Rome (there’s one particularly impressive shot of the film star Anna Magnani), all of which look as spontaneous and unstudied as anything done by his future wife. And in a 1948 photograph by McLaughlin-Gill, the model, wearing a fetching red two-piece swimsuit, poses on an old Florida pier whose tattered banners and wooden beams juxtaposed with her limbs suggest interlocking triangles, orbs and squares, creating a sort of  Constructivist still life.

“My father would use artifice to frame his objects,” says the Gills’ daughter. “My mother would take that outdoors. He turned inward into a controlled environment. She went out into the world, into an environment that she couldn’t control. But I think they shared a humanist perspective.”