Lundgrens Antiques Mixes Periods to Appeal to the Modern Collector 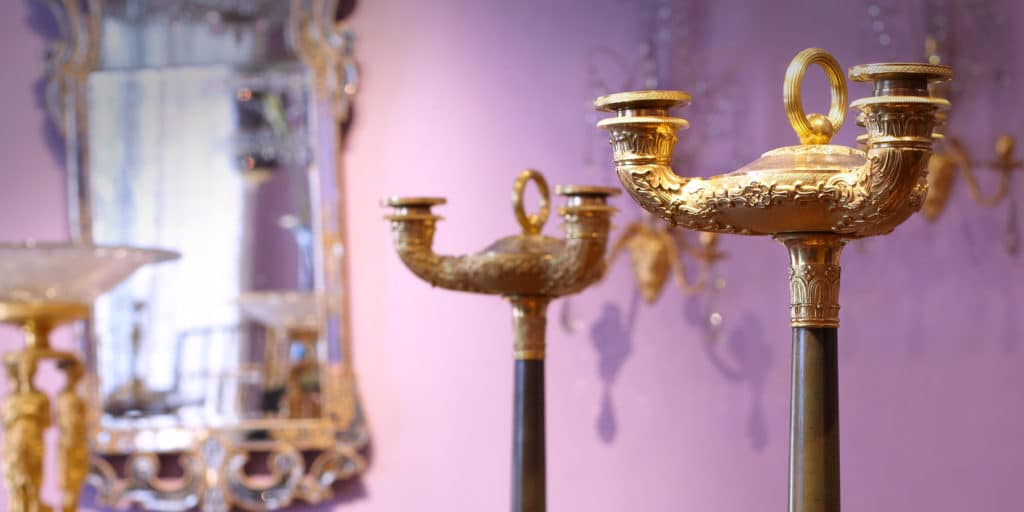 A third-generation owner of the Stockholm gallery discusses Gustavian furniture, diversifying his offerings and how to clean a chandelier. 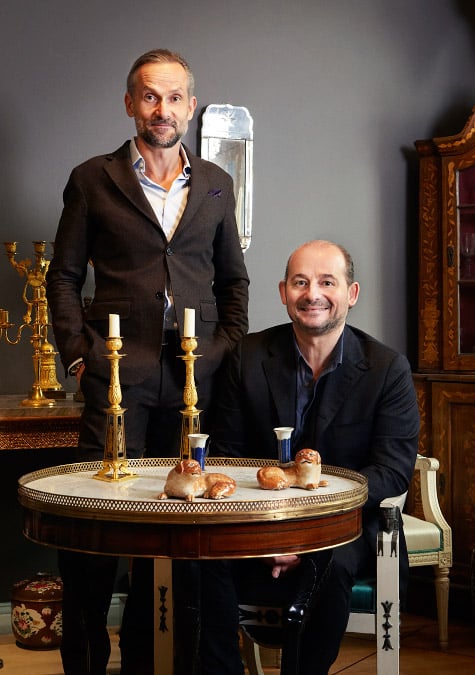 April 17, 2017Brothers Ian (left) and Theo Lundgren are the third generation to run their family’s Stockholm antiques gallery, which focuses on European — especially Swedish — furniture and decorative arts, with a particular emphasis on chandeliers. Top: A pair of Empire patinated and gilt-bronze candelabra made in France around 1825.

On a quiet side street in Stockholm close to one of the many docks in this city on the water, one can glimpse a glittering canopy of crystal chandeliers through the plate-glass windows of Lundgrens Antiques. Since the 1930s, three generations of dealers from the Lundgren family have offered some of the finest examples of Swedish and European furniture and decorative arts from the 18th and 19th centuries, with a particular focus on chandeliers. But that wasn’t a tradition brothers Theo and Ian Lundgren initially saw themselves continuing. “It was our grandfather who started this shop, but my brother and I didn’t have any plans to join the business,” says Theo. “Life can change quickly, however, and when our father passed away suddenly about thirty years ago, we were thrown into this.”

Although brought up around the business, in those first years of running the show, the brothers learned by trial and error. Today, they divide their responsibilities: Ian, in addition to handling the financial side of the business, specializes in the stunning hanging light fixtures for which the firm is renowned. Theo focuses on furniture, works of art and the many art fairs at which the gallery exhibits.

Over time, they’ve seen changes aplenty in both the market and in their buyers’ taste. As it always has, Lundgrens continues to offer fine Swedish and European antiques, displaying them in two spacious rooms whose walls are lined with pictures and whose ceilings are festooned with chandeliers. These days, however, they’ve expanded their purview to include a wider array of pieces and periods.

“We’re looking for objects that catch the eye,” Theo explains, “so we have a diversity of things, including the occasional twentieth-century piece.” Rather than classic mid-century Scandinavian furniture design, these relatively contemporary items tend to be abstract paintings by modern Swedish artists such as John Ivar Berg, Pierre Olofsson and Olle Bonniér and contemporary sculpture by the likes of Ijah Reveman. They sit comfortably alongside antique furniture and decorative arts, reflecting the eclectic interior decorating approach taken by many of today’s collectors.

With Ian otherwise engaged, Theo recently sat down with Introspective at a rich mahogany table guarded by two large stone lions that once graced a 17th-century Swedish castle. He offered some insight into Lundgrens’ dealings in chandeliers and Swedish antiques and dispelled a few myths about painted furniture. 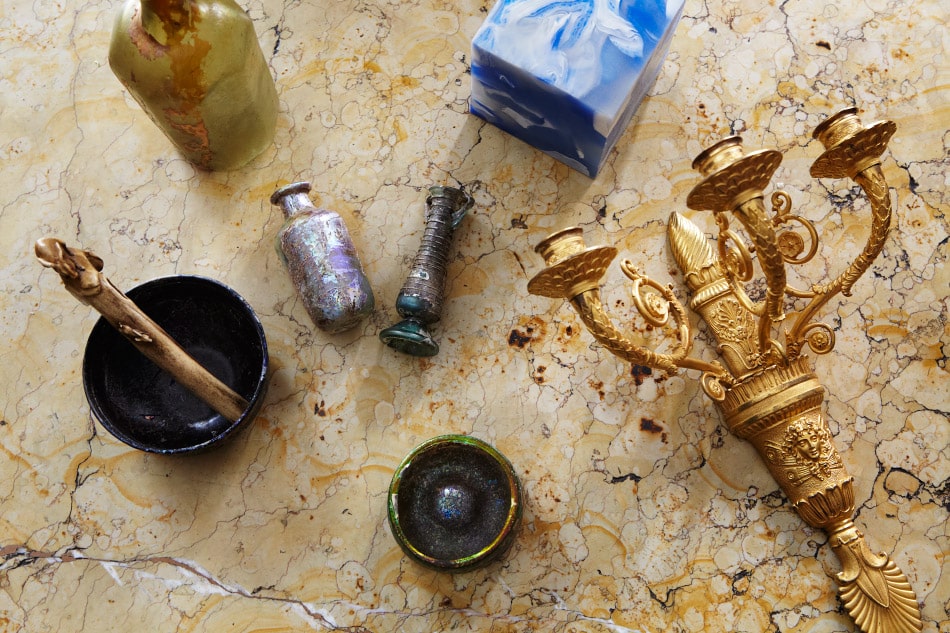 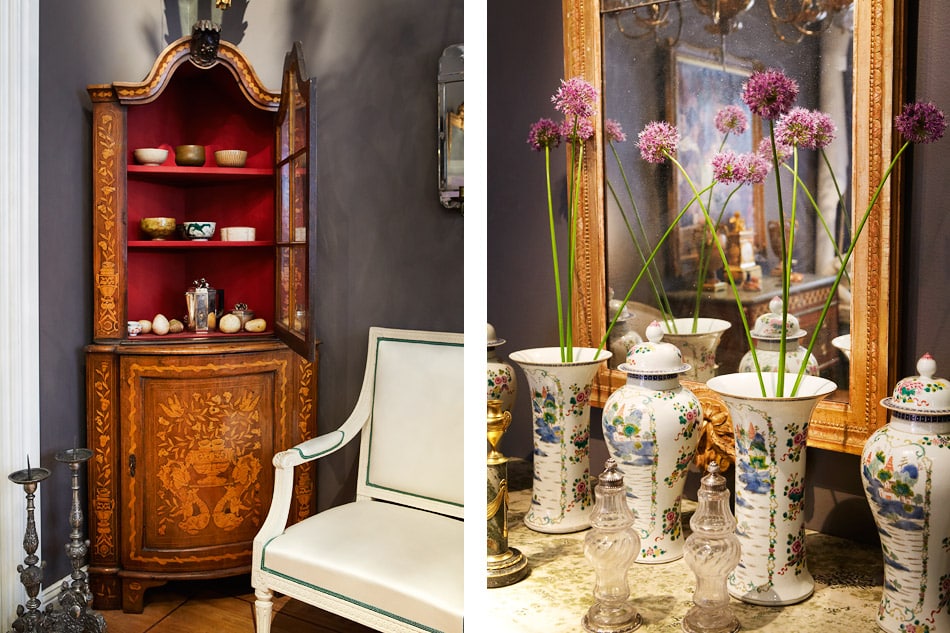 Left: A painted Gustavian armchair by Johan Lindgren, 1780–90, one of a pair the gallery has on offer, sits in front of a 19th-century Dutch Rococo corner vitrine (again, one of a pair) with floral intarsia; within the cabinet is a collection of Japanese ceramics. Right: Several components of a five-piece 18th-century Chinese porcelain garniture are reflected in an 18th-century Gustavian mirror made in Stockholm. 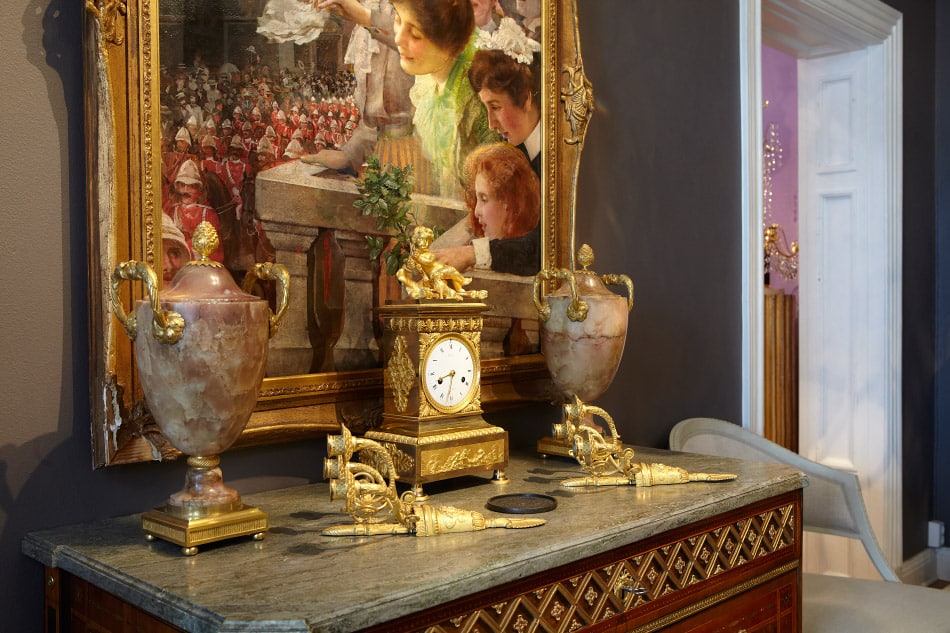 A pair of Louis XVI ormolu-mounted pink alabaster urns flank a gilt-bronze Empire mantel clock made in Paris in the first part of the 19th century. These sit atop a Gustavian commode made by Nils Petter Stenström between 1780 and 1790. The painting is Isaac Snowman’s The Homecoming, ca. 1900. 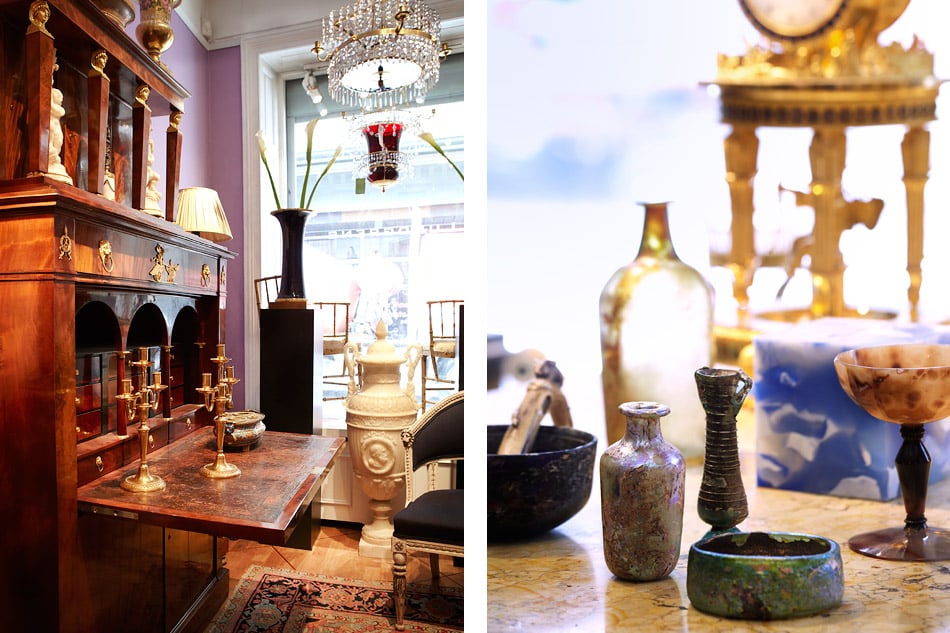 Right: A mahogany secretarie, from about 1810 and likely made in Germany, features gilt-bronze mounts. Beyond it lies a large alabaster Italian urn, ca. 1840. Left: Behind the collection of ancient Roman and more contemporary items sits a gilt-bronze French clock, ca. 1795, attributed to Jean-Simon Deverberie; the agate cup at the far right dates to the 19th century. 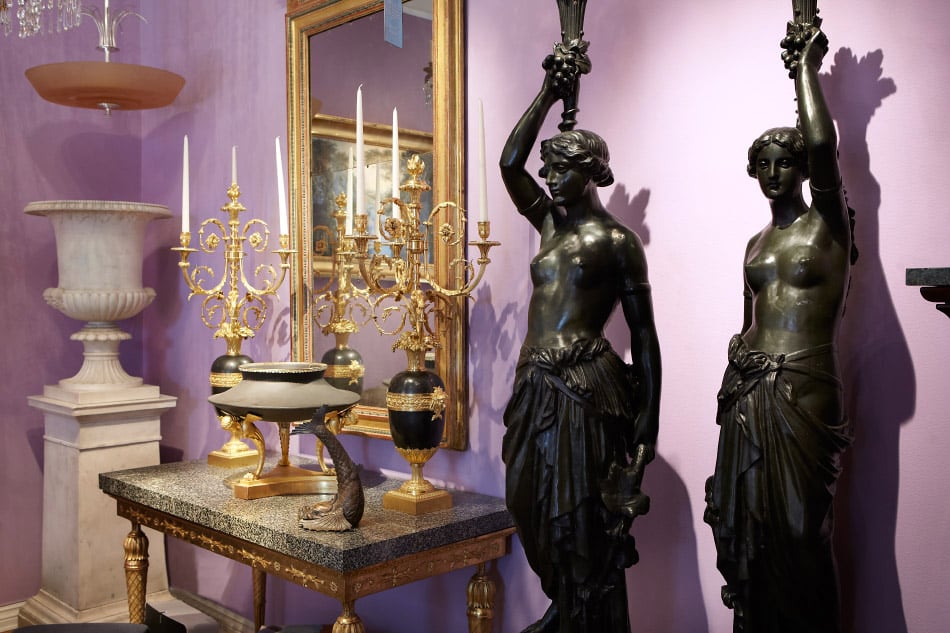 Once owned by the Duke and Duchess of Windsor, a pair of ca. 1780 Louis XVI gilt and patinated candelabra attributed to François Rémond hold pride of place in front of a late-Gustavian mirror attributed to Pehr Ljung, ca. 1800. They’re on a porphyry-topped giltwood console table, also ca. 1800, attributed to G. Iwersson. On the right are a pair of large 19th-century cast-iron floor lamps made by the Swedish company Bolinder. 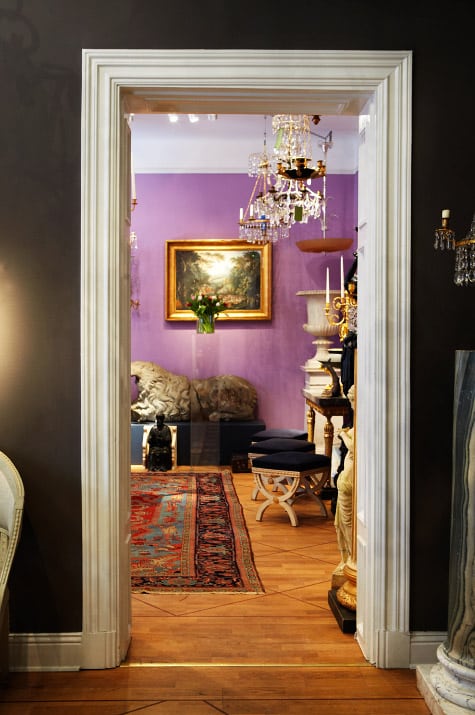 At Lundgrens, a mix of mostly 18th- and 19th-century antique furniture and objects keeps company with a smattering of works from the 20th and even 21st centuries. “We’re looking for objects that catch the eye,” Theo says, “so we have a diversity of things.”

A term regularly used in connection with Swedish furniture is Gustavian, which seems to refer to gray-painted pieces from a range of periods. What does the term actually mean?

For many not familiar with Swedish antiques, a piece of Gustavian furniture is, indeed, any gray-painted commode or chair from a broad period of time. But the Gustavian period and, by extension, Gustavian furniture are actually much more clearly defined. The period starts around 1771, when Gustav III came to the Swedish throne. He was assassinated in 1792, and then his son, Gustav IV, became king. The period extends until his abdication, in 1809.

With regard to a definition of the style, it was influenced by the French decorative arts of the time, but it is more simple and less decorative. In the late Gustavian period, particularly, you have more refined, clean commodes using only mahogany.

There is painted furniture from this period, which can be either gray or red and usually originates from the countryside. We do sell some of these original painted pieces, but there are also numerous later copies and imitations created in the 20th century by decorators abroad. I have never seen in Sweden anything like the number of gray-painted commodes that I have in America!

Glass and crystal chandeliers from the 18th and 19th centuries are something for which you are particularly known. How would you account for their popularity?

We are one of the top dealers for chandeliers. Ours are mostly Swedish, but they also come from Russia, France and Germany. At times, Sweden can be a dark country, and we sell a lot of candlesticks, candelabra and so on — people are always looking for light. It is common in America and southern Europe for chandeliers to be converted to electricity, which is a shame because candlelight reflects beautifully in the glass and crystal in a way electric light can never replicate. 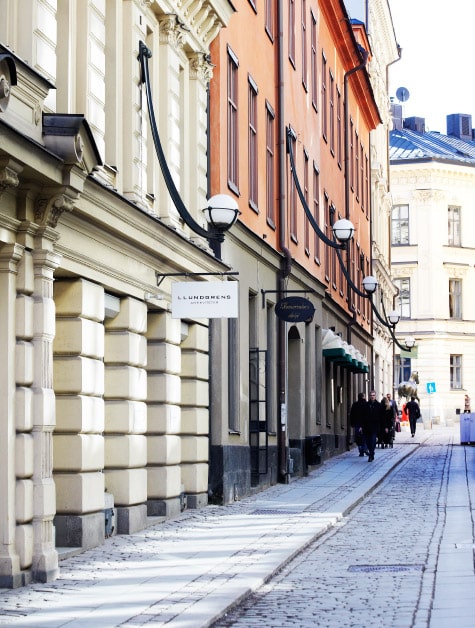 Lundgrens sits on Arsenalsgatan, a quiet side street in Stockholm near one of the waterfront city’s many docks. The gallery moved here in 2010, after 25 years on Kommendorsgatan.

Do chandeliers require a great deal of attention?

Caring for chandeliers is actually not that difficult. They need dusting sometimes, and you do have to clean the crystals, but only once a year or so. And even then, all you use is soap and water.

Where might someone go to discover more about Swedish furniture?

Unfortunately, at the moment, the National Museum in Stockholm is closed and will only reopen in 2018. However, we do also have the Royal Palace in central Stockholm and, in the north of the city, the summer palace, known as the Haga Pavillion. We occasionally offer pieces with an aristocratic pedigree, most recently selling a pair of important voyeuses [chairs, often used at games tables, with padded top rails that allowed observers to lean in and watch the play] with great royal provenance and signed by Erik Öhrmark [1747–1813], who also made the famous Gustavian Sulla chairs in the Haga Pavillion. Also, about six years ago, a collector, Sven-Harry Karlsson, re-created the interior of his country home in a new building here in Stockholm. Known as the Sven-Harry Museum, it hosts regular exhibitions of everything from porphyry to Swedish paintings, together with tours of the apartment to see his fantastic collection of Impressionist art and 18th- and 19th-century European furniture.

Theo and Ian Lundgren share their thoughts on a few choice pieces. 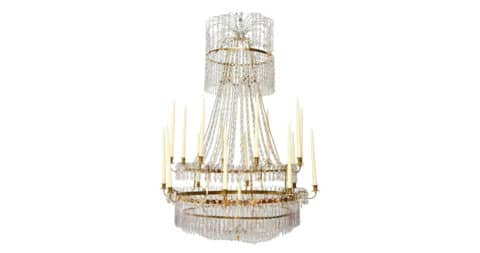 “This is a great example of a late-Gustavian chandelier with its gilt bronze in excellent condition. The piece was made in Stockholm and is unusually large. It was probably a commission for a country house or castle. In later years, many such large chandeliers were shortened when people moved into smaller homes or apartments, but this one has remained complete.” 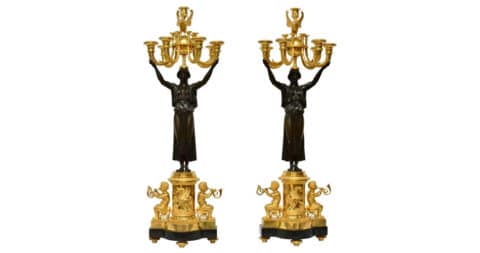 “Made in Paris at the turn of the 19th century, these candelabra are exceptionally high-quality gilt and patinated bronze. They have some curious little design elements, like the trumpets played by the seated figures on the bases, but they remain relatively simple and would work well in a contemporary home.” 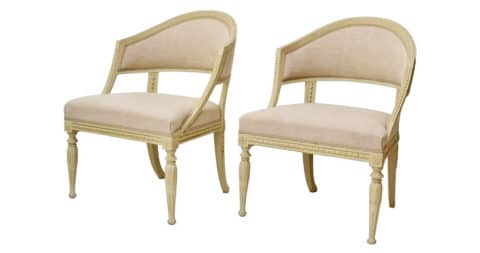 “This style is known as a tube chair and remains popular in Sweden due to its timeless feel. Though examples were made in the 20th century, these are from around 1800 and attributed to maker Ephraim Stahl. They have that Swedish painted furniture style, but with only a single layer of gray pigment, the detail in the carving can be clearly seen.” 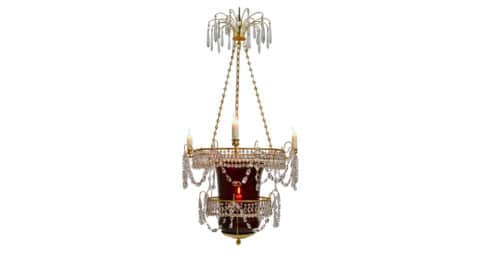 “This type of chandelier is rare, in part because the beautiful lanterns are fragile and tend to break over time. Although this Russian example does not have a particularly interesting provenance, it is in first-class condition, with very fine detailing and no noticeable damage to its ruby-colored glass, its clear crystals in a gilt bronze suspension or the rest of its gilding.” 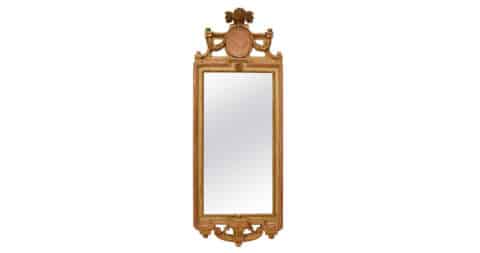 “The condition of this mirror is superb, with the original gilding and mercury glass intact. It is signed two or three times on the back by Johan Åkerblad, who was one of the most famous mirror makers in Stockholm in the 18th century. It is all carved wood with no plaster details or additions, while the gold was protected by a layer of bronze added in the early 20th century. We had the piece restored, which can be a bit of a gamble, but the gold has been brilliantly revealed.”