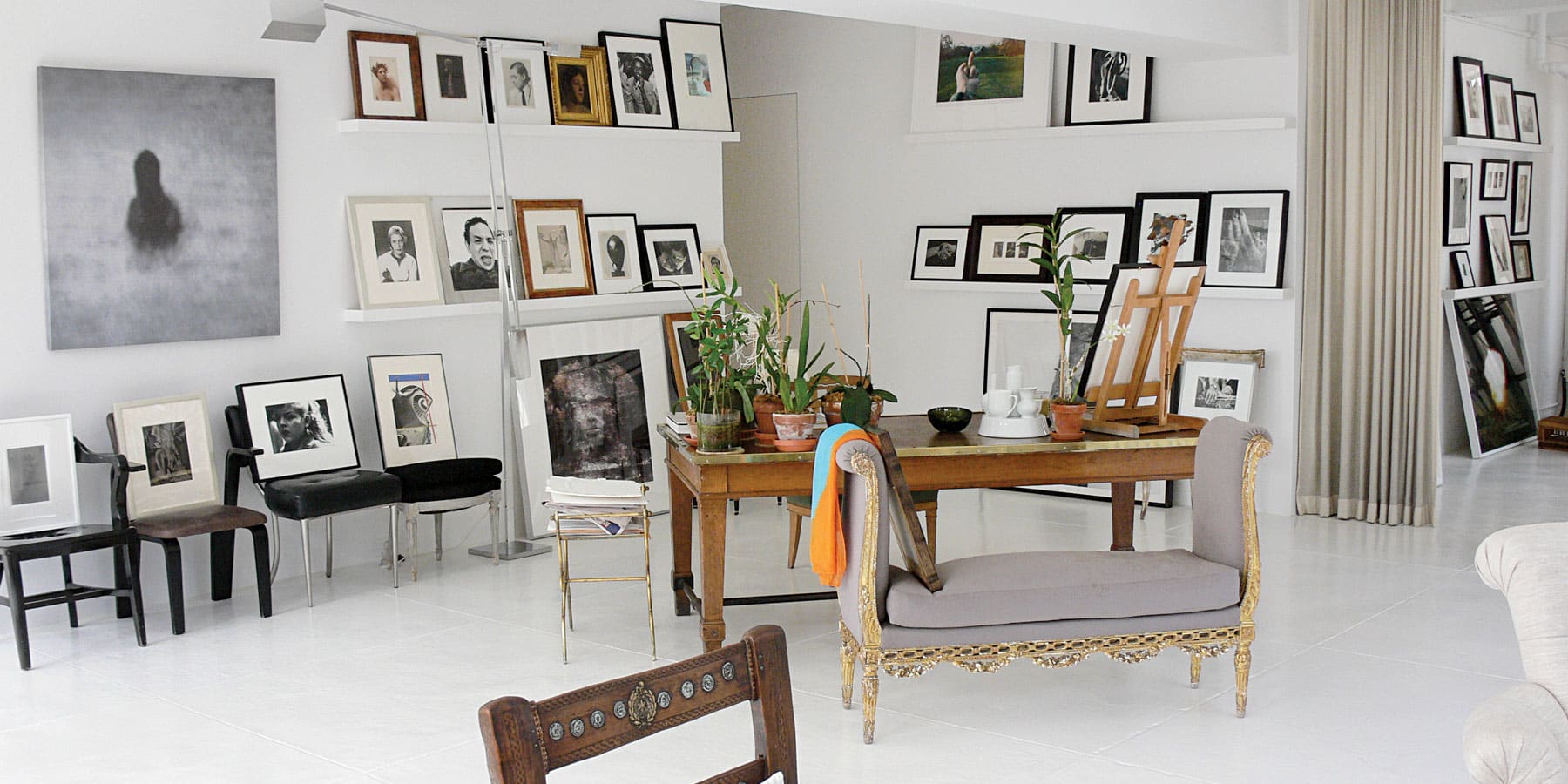 These Gotham homes reveal the tastes and tendencies of the sought-after decorators who inhabit them.

More than a decade ago, when the Internet was still a relatively innocent place and social media was newly born, Sian Ballen and I were working as editors for New York Social Diary, a society print column that had recently reinvented itself as an online magazine. In search of more material, we hit upon the idea of interviewing interior designers in their own New York homes. 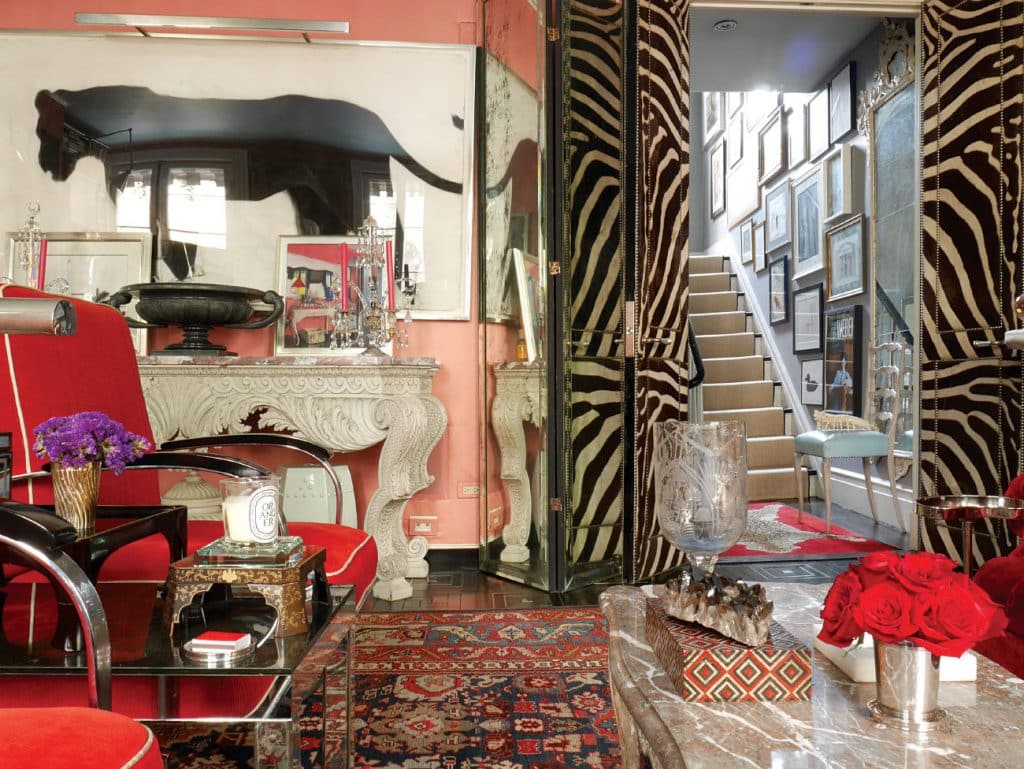 Lesley Hague and Sian Ballen compiled Making Rooms Your Own: Lessons from Interior Designers (Rizzoli) from their trove of home tours and candid interviews done for New York Social Diary. Above: Miles Redd declares he “just had to have” these zebra-skin doors in his library. Top: White walls and concrete floors are an ideal background for Vicente Wolf‘s art-and-photography collection.  All photos by Jeff Hirsch unless otherwise noted 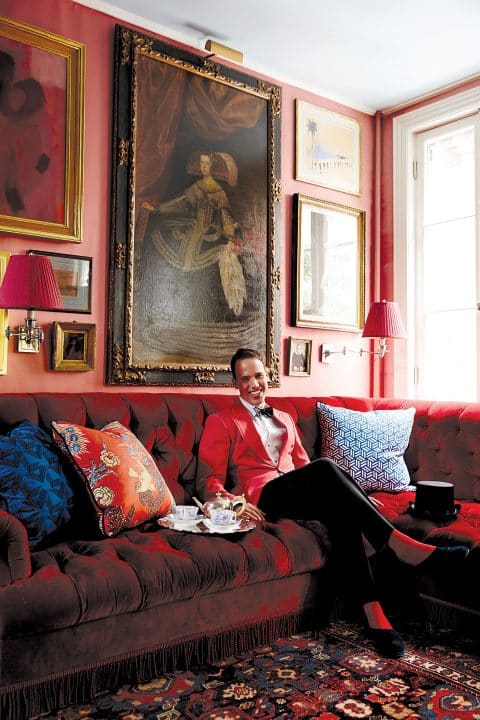 “I love grandeur, but with a cozy, nonchalant air,” Redd says. Photo by Melanie Acevedo

Rather than publish a few styled and carefully selected photographs, as a shelter magazine would, we presented lots of pictures that conveyed an intimate sense of home.

We also attempted to capture designers’ true voices in conversational Q&As. Our belief was that, surrounded by their children, pets, possessions and decor choices, they would open up to us in a particularly personal way. To our delight, that is exactly what happened.

As the columns mounted up, week after week, year after year, we realized a couple of years ago that we had a treasure trove of images and funny, unguarded conversations, some of which could be pulled out of the online ether and given the solidity of a book. Thus was born Making Rooms Your Own: Lessons from Interior Designers (Rizzoli).

The book imparts 30-odd designers’ life lessons rather than how-tos, although we also sat down with some for new Q&As in which they offered frank advice on topics like taking design risks, solving storage problems and stocking the perfect bar.

It wasn’t difficult eliciting opinions. “Always simplify — it makes things stronger. Elegance is refusal,” declared Miles Redd. Richard Mishaan took the opposite view: “If you like it, have it! Your home is where you will be spending most of your time, so don’t curb your tastes or wants.” 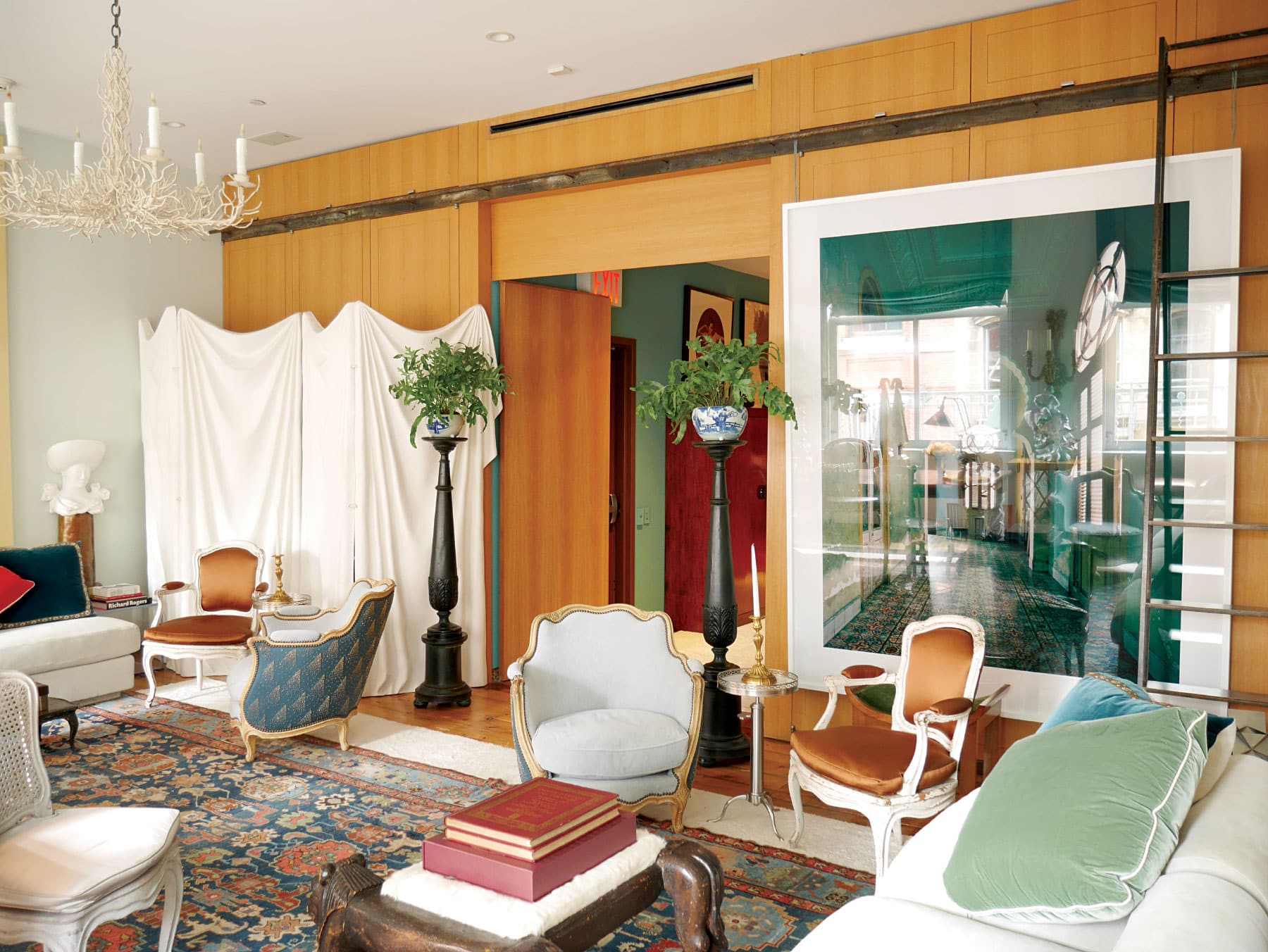 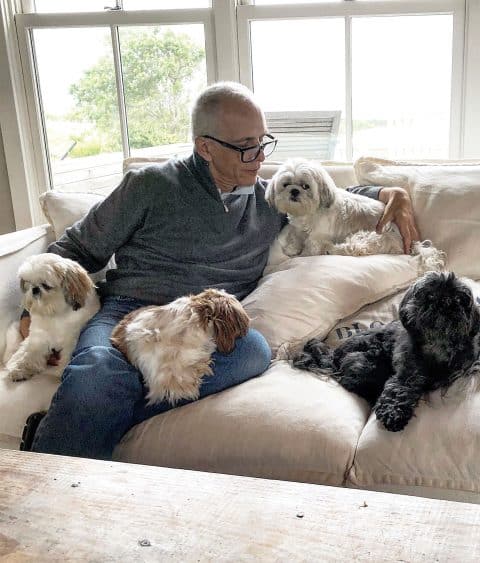 “I really don’t have a style,” says Couturier, pictured with his pooches at his Connecticut home. “I am not joking when I say that what I like is to make people happy, and in order to do that, I have to give them the house they want, not the one that I would want or would like for myself.”

Robert Couturier asserted, “Absolutely unlearn what you think is good taste or ‘taste’ in general.” Couturier’s primary residence is in Kent, Connecticut, but he spends the working week in a posh-bohemian Soho loft. He has designed the apartment with Parisian flair, combining capacious white sofas and rugs from Turkestan with some proper pieces, like a Louis XVI commode and a Jacques Adnet desk and chair.

But a large orange exercise ball sits unconcealed in one corner and paperbacks are stacked here and there without any sense of their being “displayed.” His five dogs go where they please, even getting comfy on a stool once owned by Marie Antoinette. “They live where I live, they sleep where I sleep and sit where I sit!” 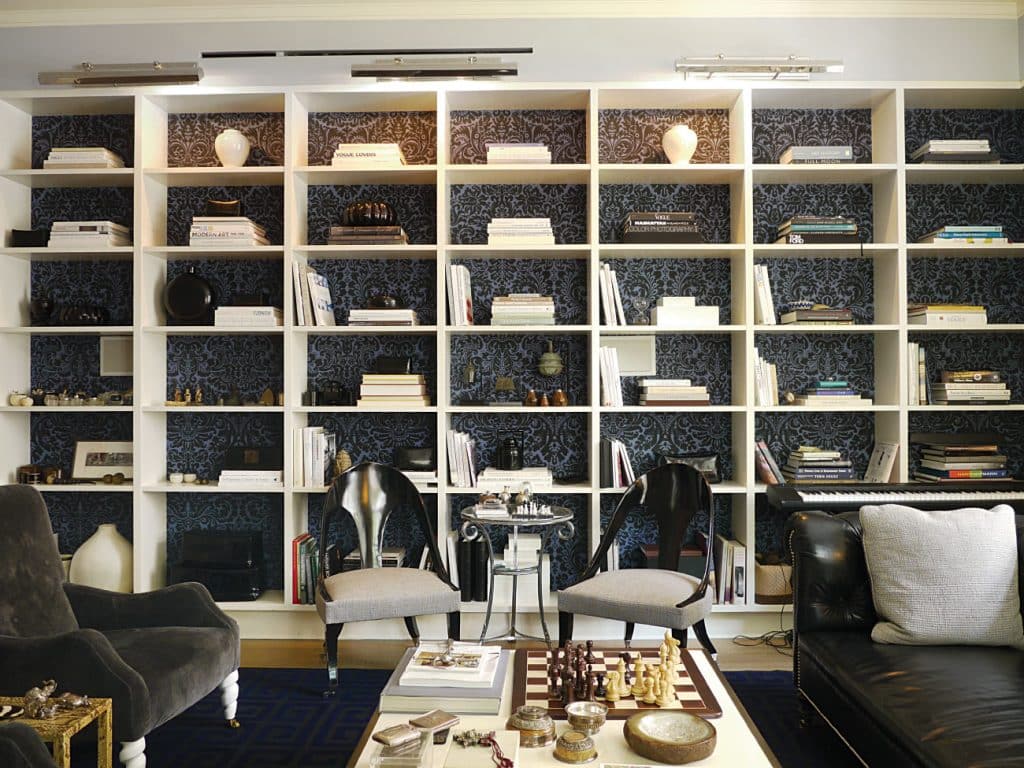 “The patterned wallpaper gave an extra punch to the otherwise neutral colors in the room,” Sara Story says of the living room bookcase, which is backed with a Farrow & Ball print. 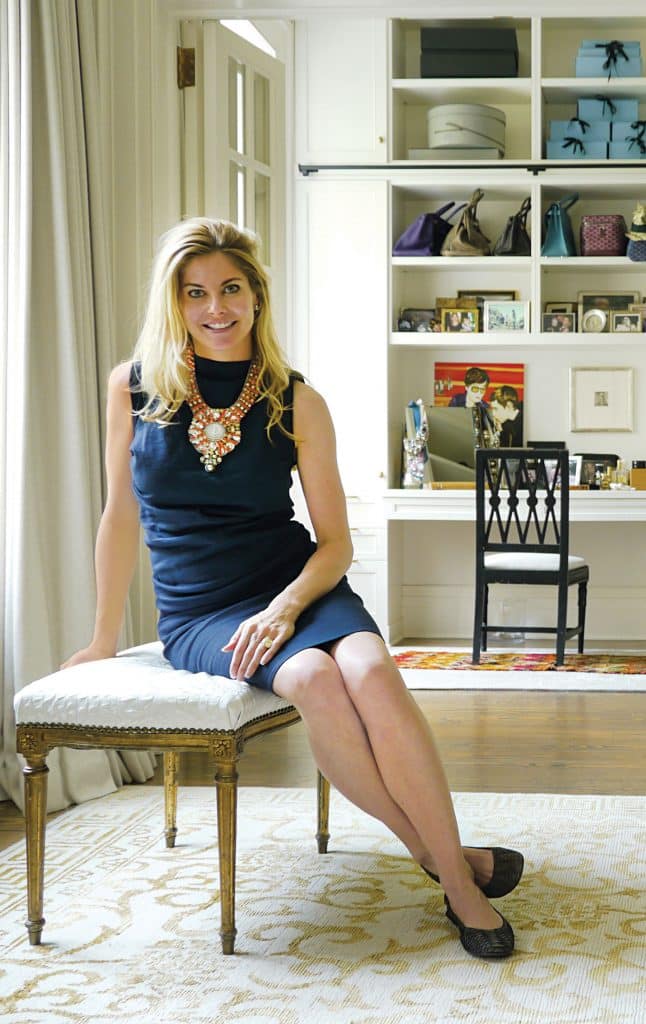 “I find that fantastic layered lighting coupled with fun wall treatments, such as lacquer, can help lighten a dark apartment in an unexpected way,” Story says.

It is always fun to be welcomed by pets and the kids and to be inside the homes where designers are free to experiment. Sara Story’s Gramercy Park townhouse, for example, is a bit more exuberant than many of her projects for clients. There’s a fabulous crimson bathroom with red floor tiles from Marrakesh, a row of Thai monk sculptures in front of a fireplace and bookcases lined with Zoffany wallpaper in a grandly exotic pattern of gold, deep plum and scarlet. All of this comes together in a home that is a direct reflection of her international background.

A Texan by way of California, Japan and Singapore, Story claimed, with her fantastic high-decibel laugh, that her oil-executive dad “is me times ten.

Of course, Sian and I are nosy above all else. We have peered inside the closets, refrigerators and drawers of pretty much every New York decorator. Hand on heart, they are immaculate and color coordinated, pretty much always. In fact, most designers we talked to lamented their inability to not tidy up within five minutes of any mess appearing.

Vicente Wolf did say he doesn’t mind “letting things go a bit,” but even he makes his bed every single morning. 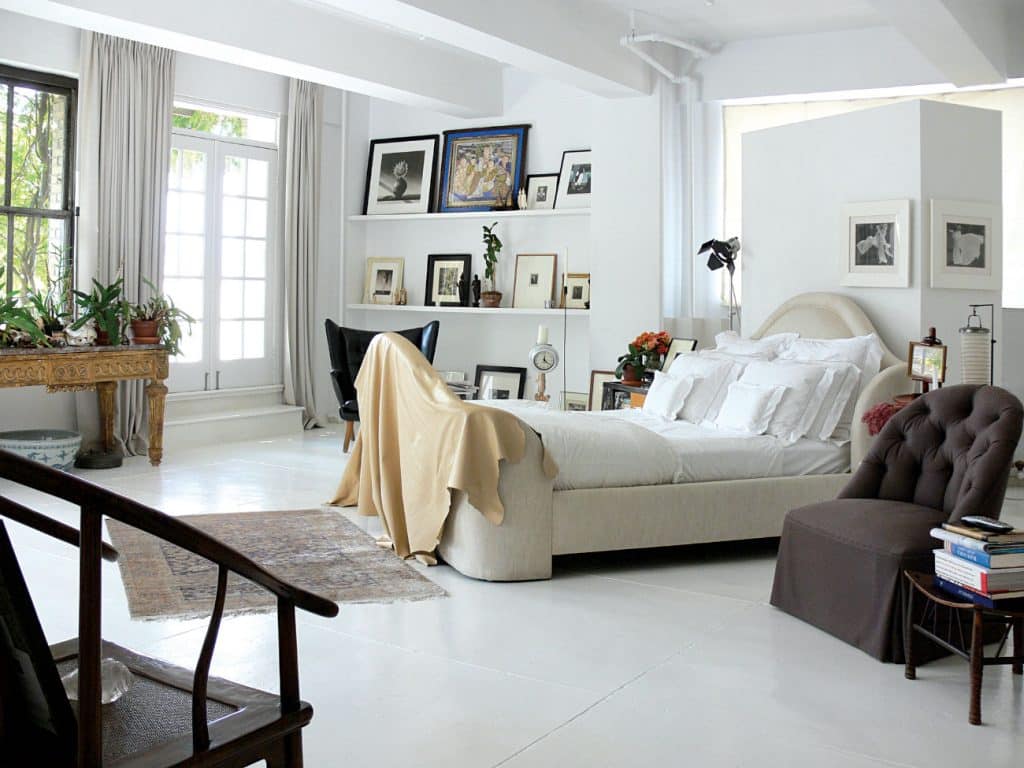 The floor-to-ceiling curtains in Vicente Wolf’s bedroom accentuate the space’s great height and shield him from the early morning light. 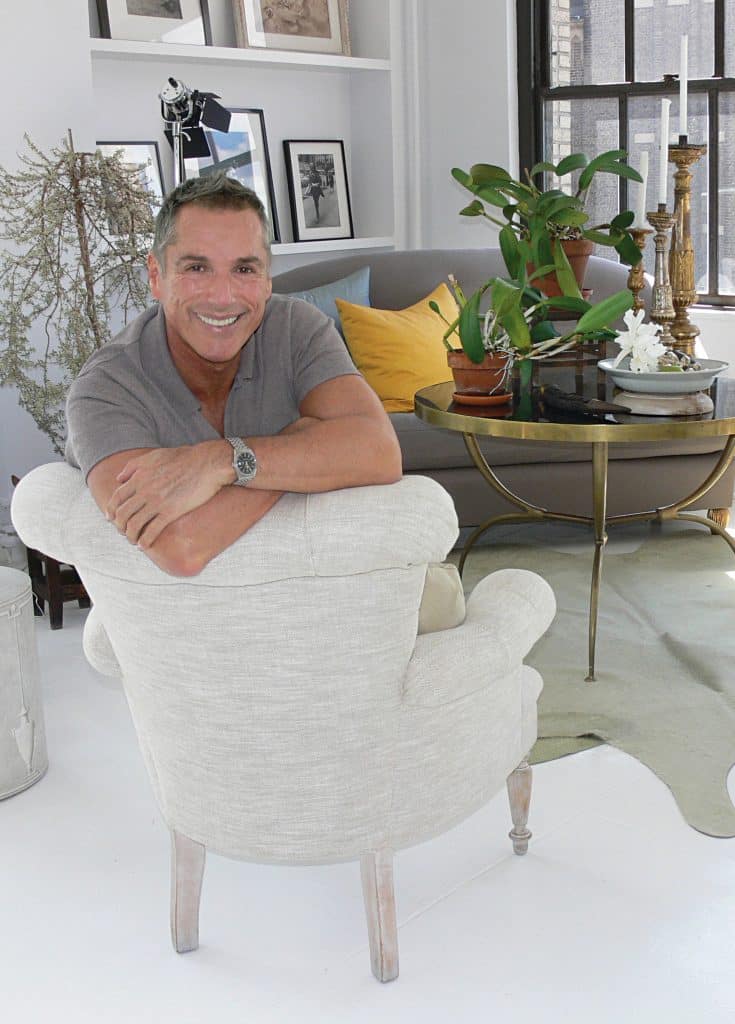 Vicente Wolf describes his perfect room as “a square space full of light, with a ceiling no higher than twelve feet, very large windows and a magnificent view.”

We wandered through his tranquil Garment District loft, which is filled with his outstanding collection of black-and-white photography, propped on shelves instead of hung upon the walls. In the kitchen, Wolf offered each of us a swig of his favorite drink: chilled bison-grass-flavored vodka from Paris. Being dyslexic, as are a number of designers we meet, he told us, “the format of learning in school did not work for me. What you see here is what I can see in my mind before it’s created.”

Many designers attributed their creativity to the influence of family members.

Eric Cohler said he is beholden to his paternal grandmother, who, as he put it, “had the best taste of anyone I’ve ever met.” Cohler grew up in a family of contemporary-art and antiques collectors. Despite having moved in and out of more than 20 apartments over the years, he has pieced together his own thoughtful art collection, displayed in unusual spots, such as against windows or bookshelves.

“I’m a trained classicist with a veneer of modernity,” he said, confiding that his best budget-friendly design hack is to cut vintage black-and-white photographs from books and put them in good quality frames. His favorite room in the world is Anne Bass’s Fifth Avenue living room, designed by Mark Hampton — who came up time and again as a designer’s designer. 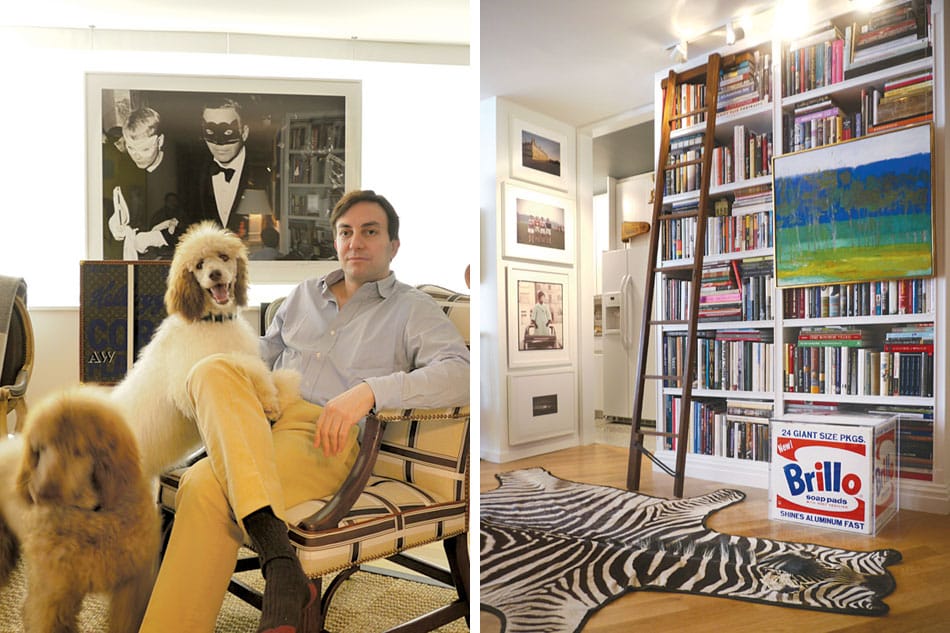 Left: “Color is the easiest way to make the largest impact,” says Eric Cohler. “Walls can always be repainted if you hate it.” Right: A Wolf Kahn painting and an Andy Warhol Brillo box are displayed in front of a bookcase full of art and design books in Cohler’s apartment.

The real winner in that category, though, was Albert Hadley, a decorator to whom David Kleinberg was particularly close after working for him for 16 years. Hadley’s clean, classic taste resonates with Kleinberg’s natural elegance and leanings toward French correctness. A Francophile, Kleinberg shelved books in a public library for two of his teenage years to save for a trip to Paris.

“I remember walking through the Left Bank toward the river and literally weeping,” said Kleinberg, who chose his Upper East Side apartment for its gracious, high-ceilinged living room, reminiscent of the proportions of a Parisian flat. One of the few designers who openly contemplated retirement one day, he told us, “Maybe I’ll just sit in this nice room and read a book.”