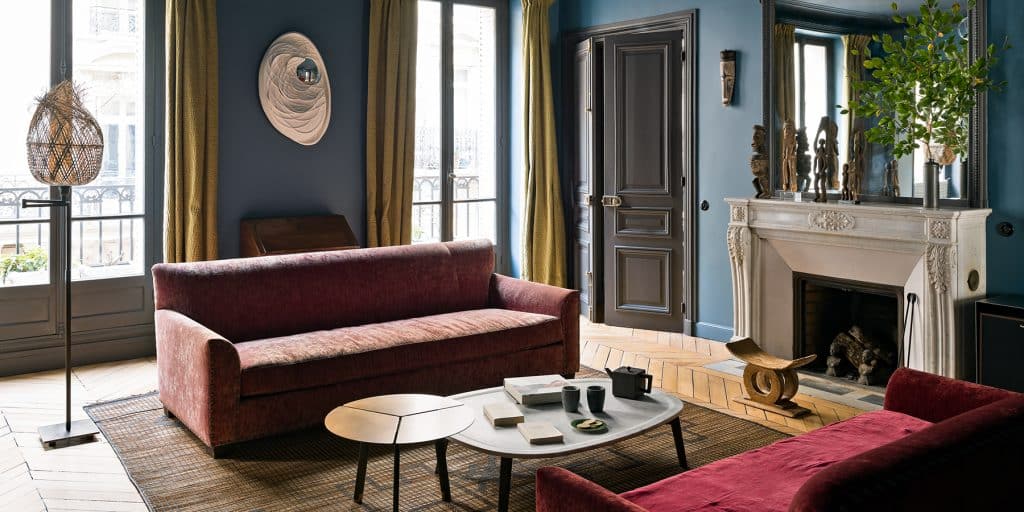 Petit proves no problem for French interior decorator Marianne Evennou, who excels at making the most of rooms and residences with the least square footage. 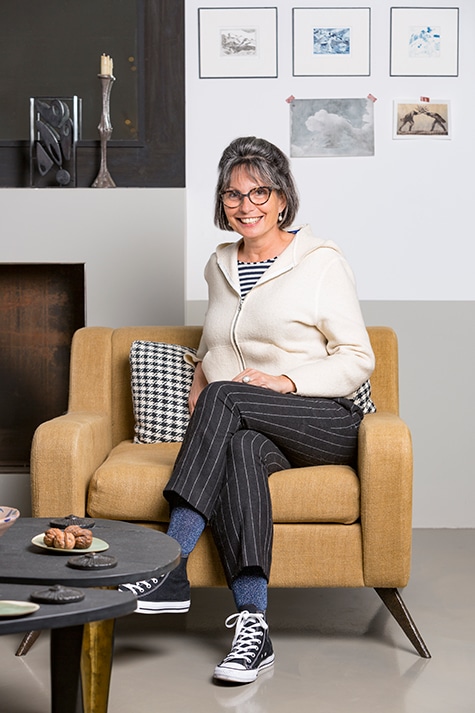 February 5, 2018Having come to interior design relatively late in life, Paris-based Marianne Evennou established herself by working for friends and family who admired her own homes (portrait by Gregory Timsit). Top: For the living room of an apartment in Paris’s 16th arrondissement, Evennou created a palette she describes as “the specific colors of light just before a storm bursts.” All photos by Stephan Julliard unless otherwise noted

French decorator Marianne Evennou is best known for her expertise in reconfiguring small spaces. The tiniest she has worked on was a 120-square-foot attic flat in Paris for an employee of a legendary Parisian dressmaker. It was so cleverly conceived that it earned a 10-page spread in a French shelter magazine. “That’s almost a page per square foot,” she quips. Evennou is the first to admit that she likes taking on diminutive projects. “There’s a poetry to them, because they’re close to the world of tree huts and the myths of childhood,” she asserts. That said, she’s keen not to be pigeonholed and eagerly points out that she also accepts many more-substantial commissions. To date, these have ranged from a 1,900-square-foot family flat in the tony 16th arrondissement to a 7,500-square-foot country home north of Paris.

Evennou came to her profession late in life. She embarked on her first interiors projects at the age of 50, collaborating with friends and family members who had admired her own homes. For example, she designed a 190-square-foot flat for her half-sister that ended up on the October 2009 cover of French Elle Décoration. “The issue achieved an exceptional score in terms of sales,” recalls the magazine’s deputy editor, Catherine Scotto. “Our readers adored it. The rest is history!” Today, Evennou has a one-year waiting list for her services, but many are willing to arm themselves with the necessary patience. “She has a very clear vision and a really good eye, and at the same time, she is also very empathic and a great listener,” says Hélène Dubrule, the director general of Hermès Maison, for whom Evennou decorated a family flat in the Paris suburbs.

She has a very recognizable aesthetic, too. “There’s a Nordic influence to my work,” Evennou notes. “I like things that are simple and not too pretentious.” She steers resolutely away from vivid hues, preferring a distinctive array of muted tones. “I particularly like her palette of grays, which reminds me of the paintings of Vilhelm Hammershøi,” says Scotto. Evennou also loves stripes (whether on walls or fabrics), geometrically patterned cement tiles and industrial-style lighting. One thing you rarely find in her interiors is a kitchen wall unit. “It’s deadly to have cupboards absolutely everywhere,” she sniffs. 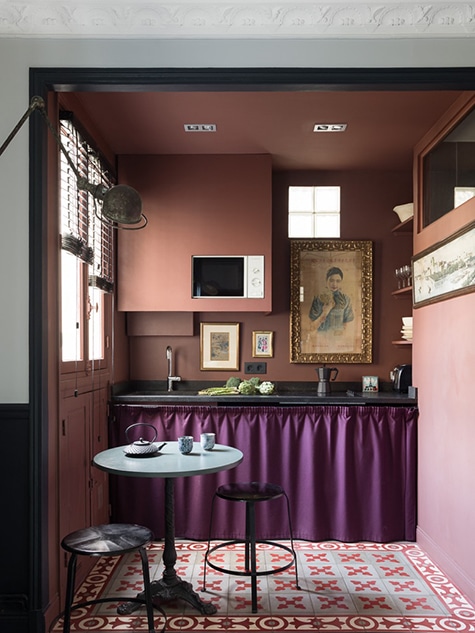 The kitchen area of another apartment Evennou designed in the 16th — this one a studio just under 260 square feet — makes a statement with simple antique furniture, graphic cement floor tiles from Carocim and paintings brought back from a trip in China.

Evennou claims to be something of an accidental decorator. “I didn’t set out to become one,” she insists. “I just kind of fell into the profession.” Yet, according to her husband, the furniture designer Franck Evennou, she has always had a flair for interiors. He still recalls the studio apartment she had when they met some 40 years ago, which she redecorated in a tropical spirit, with deck chairs and plants, after a trip to Trinidad and Tobago. “I think the need to create a kind of nest or shelter comes from the fact that she had a very peripatetic childhood,” he says. “I remember her telling me that over the course of seven or eight years, she’d lived in God knows how many different places.”

Evennou was born in Agen, in southwest France, in 1959. Her parents divorced when she was young, and she spent part of her childhood with her mother in the Dutch city of Delft. Each year, she would visit her diplomat father in international postings such as Israel and Sudan. Another point of reference was her maternal grandfather, a painter and fan of Le Corbusier, who built a modernist villa in the middle of the sunflower fields of southwest France. Evennou initially studied economics and management at the Sorbonne and took a position with the Paris chamber of commerce promoting business tourism. After giving birth to her two sons, she set up a small rug company in the 1990s, working for several years with designers like Olivier Gagnère and Nathalie Du Pasquier, and assisted Franck with press relations and administrative tasks. The two have lived in a series of unusual homes, including a 17th-century convent and a house on the Normandy coast that was so rundown they purchased it for next to nothing. “At the time, we were planning to buy a Land Rover, and I remember it was exactly the same price,” says Evennou, laughing. Their current abode is a former butcher’s shop in the city of Senlis, an hour’s drive north of Paris. 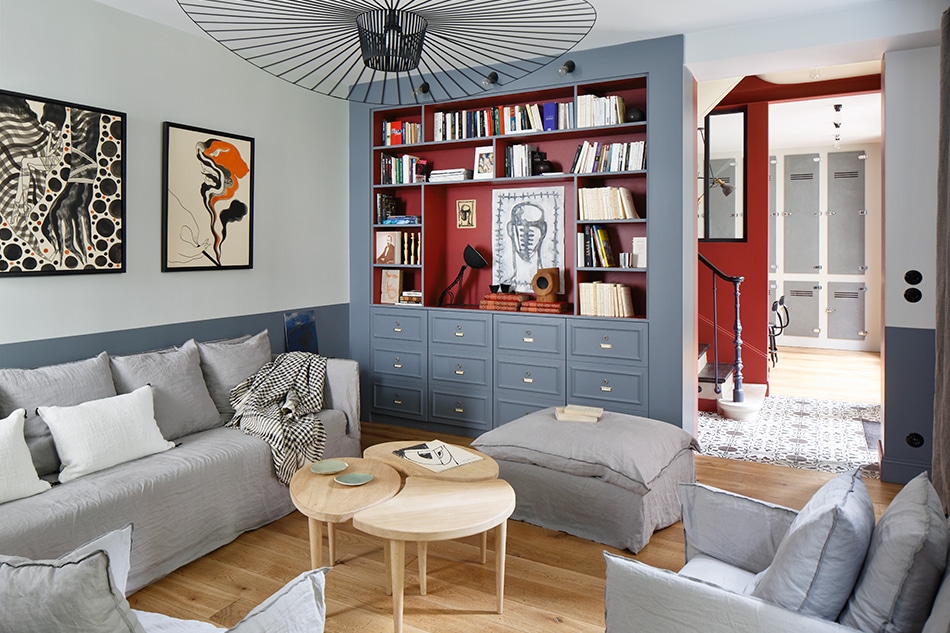 The living room of what Evennou describes as “a charming little city house” in Vincennes features Paola Navone seating from her Ghost collection for Gervasoni, as well as drawings by Olivier Kuntzel and Florence Deygas, a Constance Guisset chandelier and a trio of cocktail tables by Evennou herself. 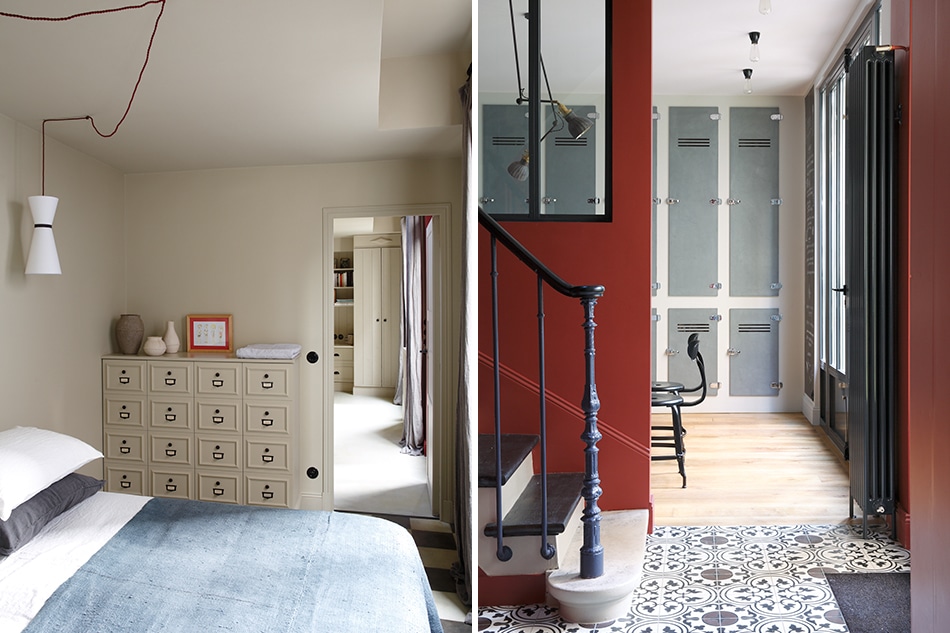 Left: The master bedroom of the Vincennes house — whose floor is hand-painted and whose lamp is custom — opens to a home office. Right: To set off the entrance area from the adjacent living room and kitchen, Evennou painted it red and covered the floor with cement tiles. 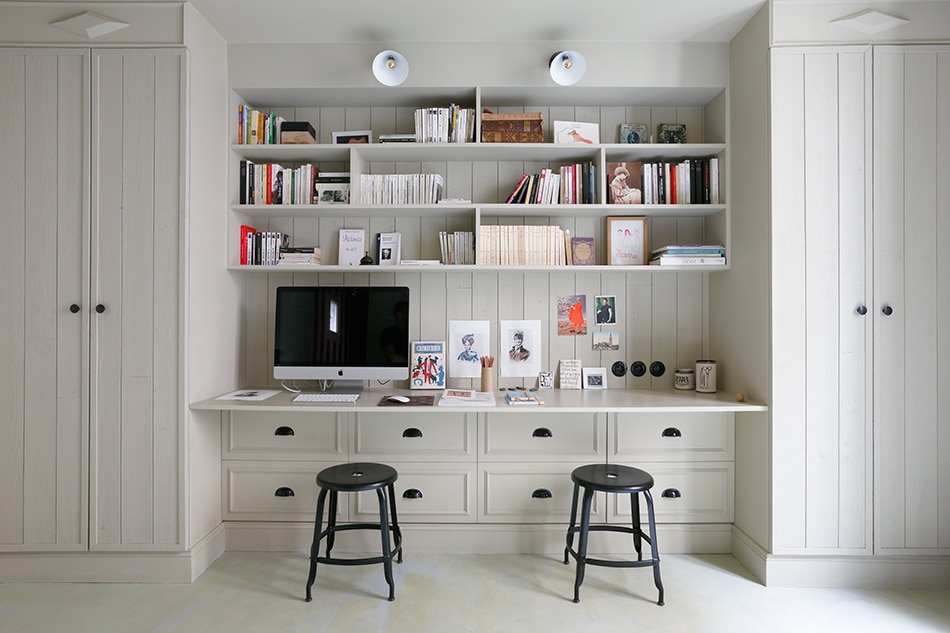 In the home office in the same house, cabinets on either side of the desk hide files, while bookshelves above provide room to show off more attractive objects, books and drawings. The lamps are by Atelier Areti. 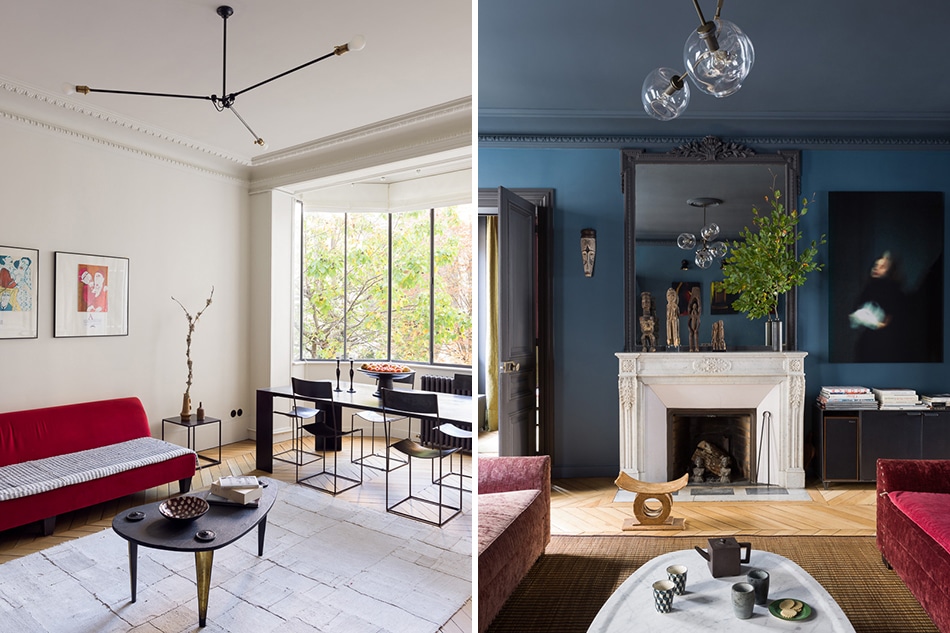 Left: The coffee table in the dining and TV room of the larger apartment in the 16th is by the decorator’s husband, furniture designer Franck Evennou. Right: Lindsey Adelman created the living room’s chandelier, while the painting is by Alexeï Vassiliev and the sculptures are African. 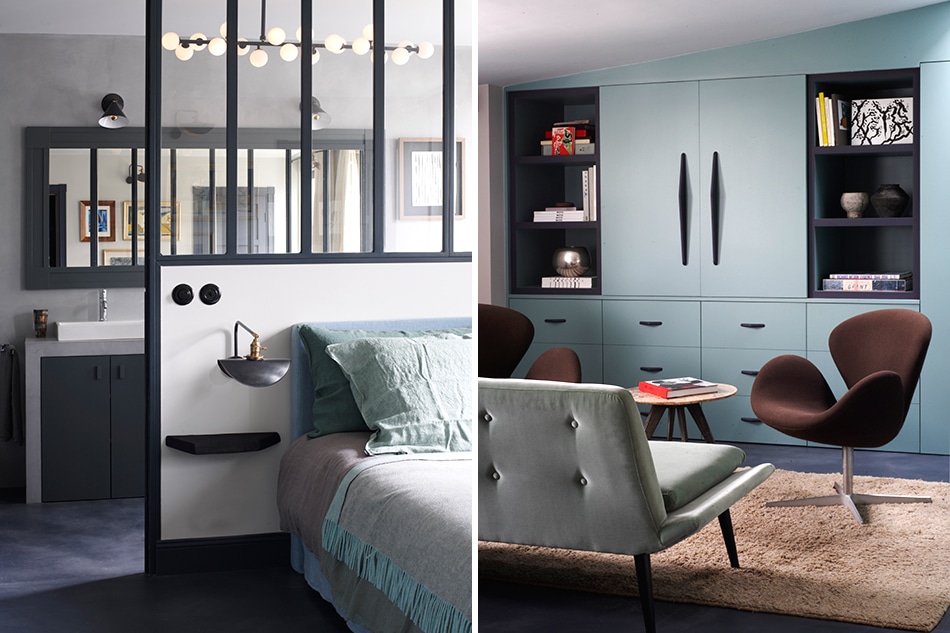 Left: In a loft in Neuilly, just west of Paris, the semi-open wall behind the bed divides the sleeping area from the bathroom while letting light through. Right: Evennou designed built-in cabinetry and shelving in the media room to hide a TV and show off an art collection. The chair is by Arne Jacobsen. Photos © Adrien Dirand 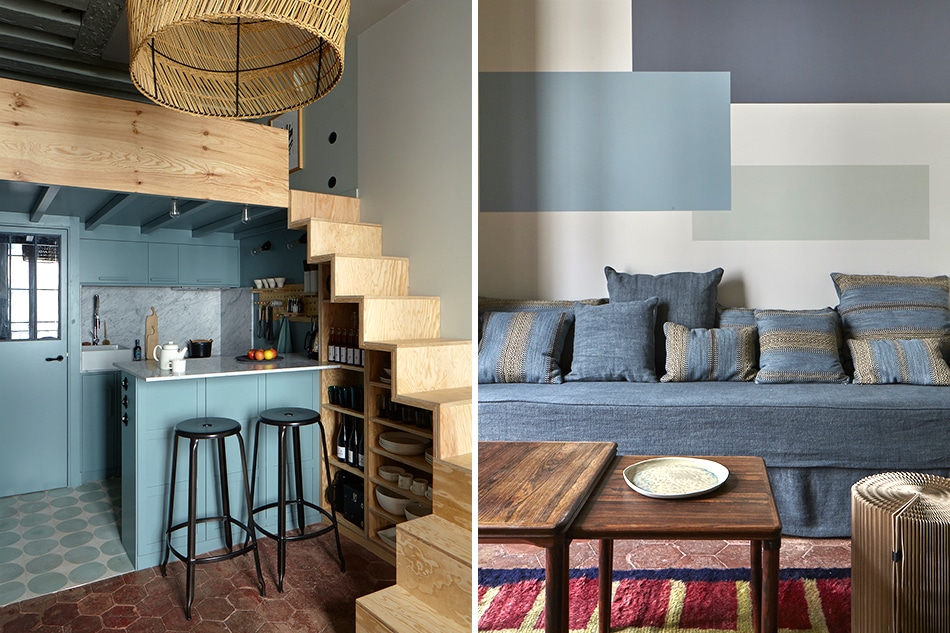 Left: In this 270-square-foot pied-à-terre in Paris’s Marais, which Evennou did for Swiss art collectors, she maximized the very limited area by placing the bedroom on a mezzanine and creating shelves under the stairs that lead up to it. Right: The side tables are from the 1950s. The cardboard stool can be folded, should more floor space be needed. Photos © Marie-Pierre Morel 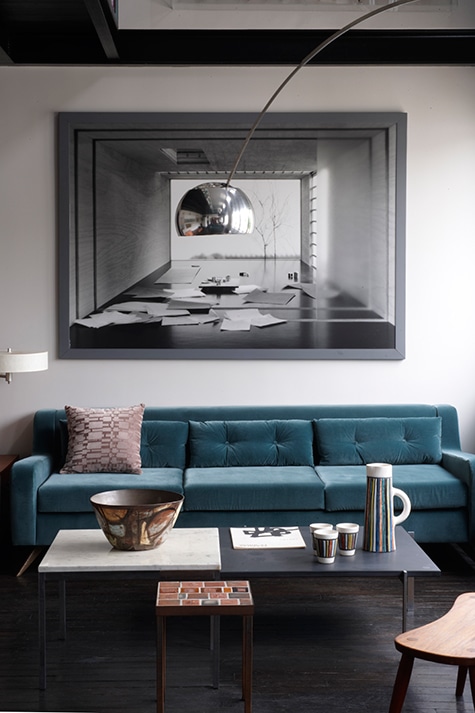 Evennou and her husband designed the sofa in the Neuilly loft together. The photograph above is by Philippe de Gobert, the ceramics on the coffee table by Alexandre Kostanda and Roger Capron. Photo © Adrien Dirand

Evennou’s success is in part due to her firm grasp of space. “When she enters an apartment, she immediately knows how to rework its volumes to maximum advantage,” says Franck. She often punches atelier-style windows into walls and once enclosed a kitchen in the middle of a Parisian apartment in a glass box. A constant preoccupation is to keep as many historic elements as possible. “I’m not one of those designers who likes to make a tabula rasa,” she explains. “I prefer to maintain things that are a link to the past.” Adds Scotto: “She has a wonderful way of respecting the soul of a space. You have the impression that nothing has been changed, whereas, in fact, everything’s been turned upside down.”

Needless to say, Evennou is often asked for tips on transforming small spaces. She advocates always having an entry hall. “It creates a transition between the outside and private realms,” she explains, “and also provides you with somewhere to place your belongings when you come in, rather than having them overwhelm your apartment.” She is also a believer in using different floor treatments (“It enlivens the decor and helps to define the different areas”) and often installs built-in work stations. On the other hand, she would never dream of having a sofa bed. “I’d rather sleep on the floor,” she says.

Her approach to her work is both personal and passionate. “She puts as much of herself into a project as if it were her own house,” notes Pablo Coves, the director of a freight company and one of her clients. For each commission, she creates a dedicated Instagram page, and at the end, she presents her clients with a book recounting the process in both words and images. “There’s a kind of umbilical cord that unites us,” she says. Indeed, Coves claims he felt like an orphan once his house was complete. For Dubrule, the relationship is an enduring one: “She entered our private world with subtlety and tact, and she ended up becoming a friend.” 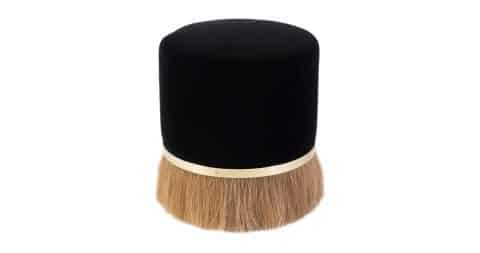 “Very simple, easy to move and to use, with a chic touch, thanks to the fringe” 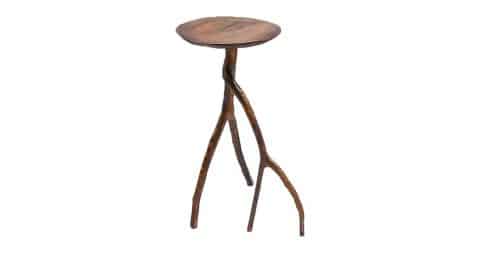 “A piece of furniture like a sculpture — handmade, poetic, unique” 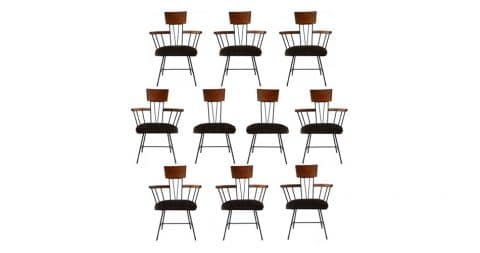 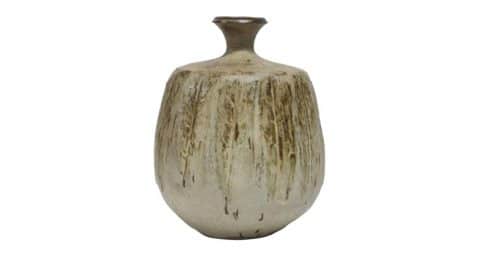 Shop Now
Vase in the style of David Cressey, 1968, offered by Solo Modern

“I always love to have some handmade ceramic vases in my houses. Just put a branch in one on a console, and you don’t need more.” 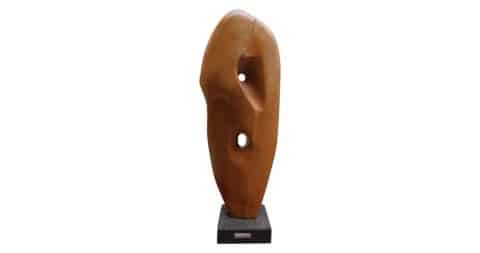 “Sculptures have always been very important in my life, as my husband is also a sculptor. I love this one, which reminds me of Franck’s work.” 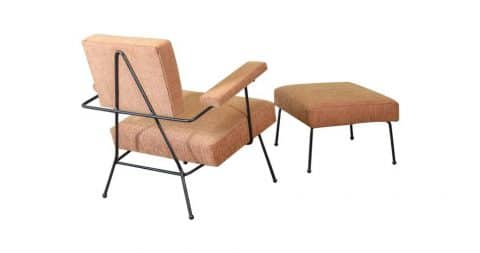 “It’s not that easy to find a comfortable and well-designed armchair. This one seems perfect.” 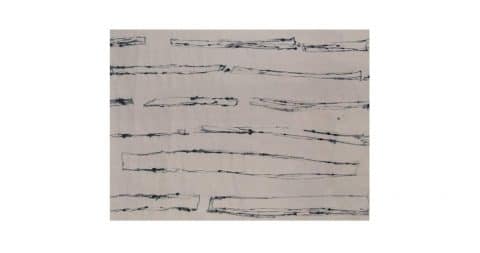 “A house with no art on the walls is just impossible for me. What really makes a house is music, paintings, sculptures and a nice smell coming from the kitchen. The rest is secondary.” 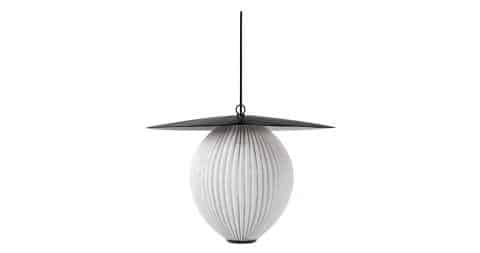 “I’m a big fan of Matégot. This lamp hangs in the entrance of my own office.” 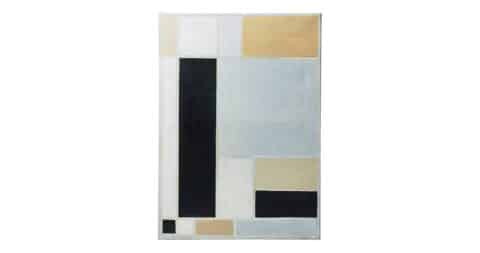