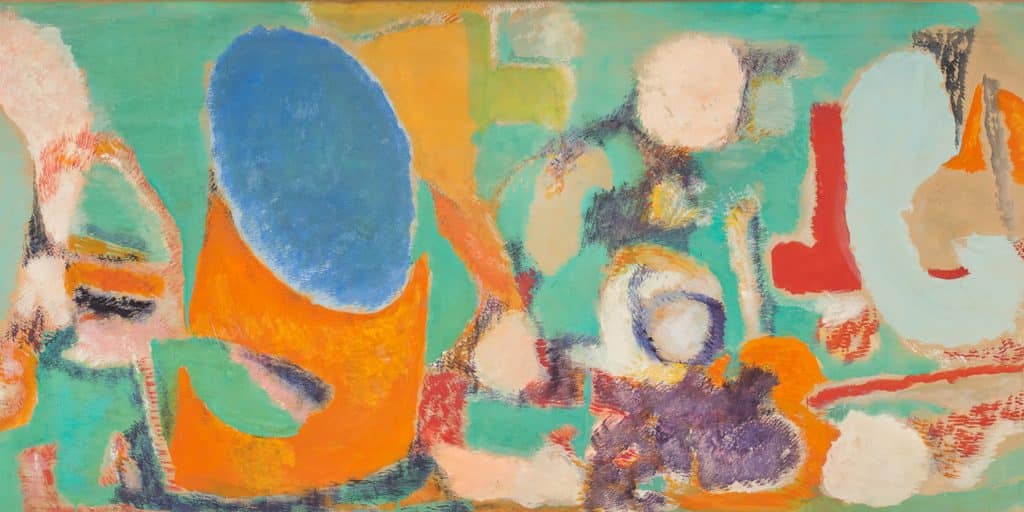 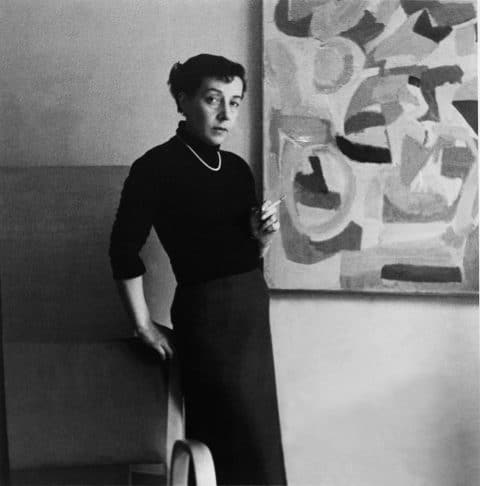 French lyrical abstractionist Marie Raymond, seen above in her Paris studio in 1950, is the subject of a new show at the Parisian gallery Diane de Polignac that brings her out of the shadow of her son, Yves Klein. Top: L’œil bleu du lointain, 1950. All images courtesy of Diane de Polignac Gallery

A major figure in postwar lyrical abstraction, French painter Marie Raymond (1908–89) is perhaps best known as the wife of painter Fred Klein and the mother of French Nouveau Réaliste Yves Klein. That perception is wrong, according to Michèle Gazier. “First and foremost, Marie Raymond is an accomplished artist in her own right, and we must not define her either in terms of her husband or her son,” argues Gazier, a French writer, translator, literary critic and editor who is currently preparing a biography on Raymond for publication next year in a coedition by the Parisian gallery Diane de Polignac, the Yves Klein Archives and the publisher ARTEOS.

This long-forgotten artist is receiving much deserved attention right now, thanks to de Polignac’s exhibition “To the Light,” which runs through November 29. 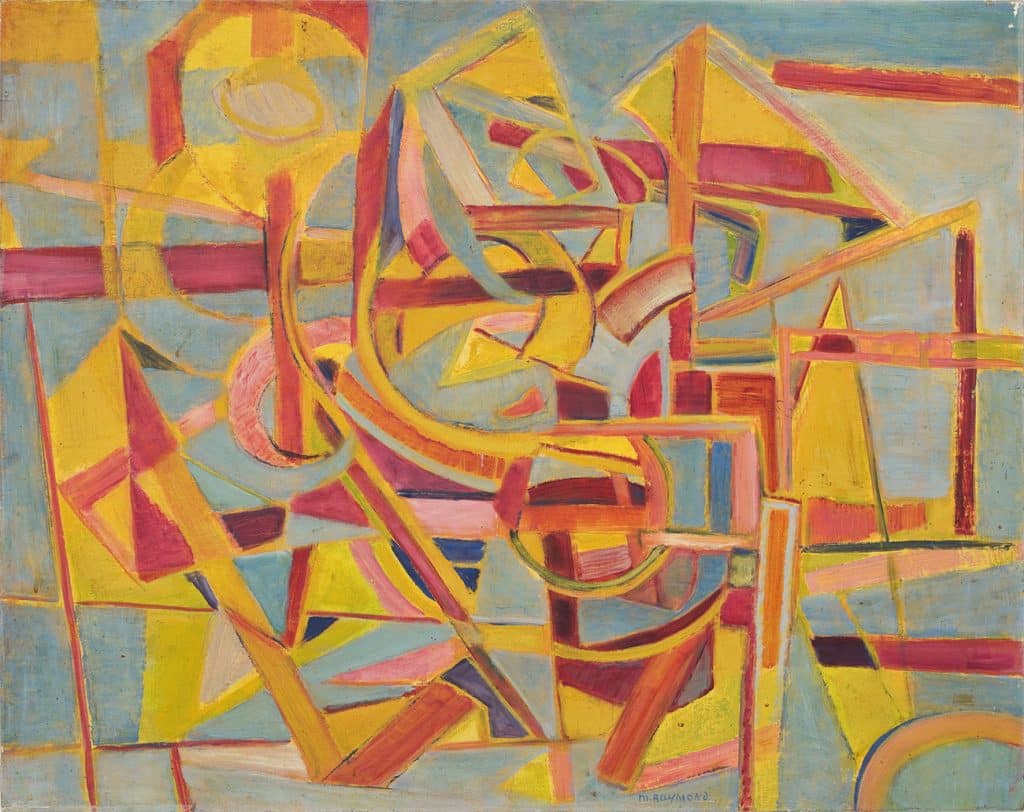 “I’d seen her name regularly in catalogues and on exhibition posters alongside those of Hans Hartung, Pierre Soulages, Serge Poliakoff, Bram van Velde, Jean-Paul Riopelle, Nicolas de Staël and Joan Miró,” de Polignac recalls. “And I realized both how deeply connected she was with the other artists of her time and how little information was available on her. I asked myself, Why is it that this intelligent, innovative artist, greatly respected by critics and her peers during her lifetime, has so little visibility today?” With the help of the foundation that conserves Yves Klein’s archives, the gallerist says, “I discovered an extremely coherent body of work by a woman artist who was a pioneer, groundbreaking and incredibly relevant to her generation.” 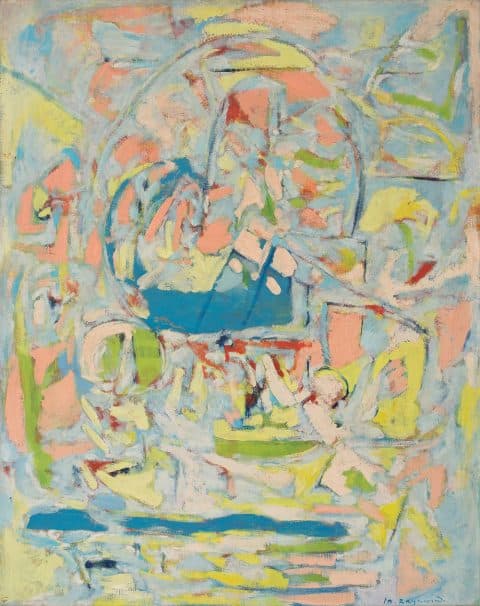 Born into a comfortable bourgeois family in La Colle-sur-Loup, near Nice, in the South of France, Raymond attended an exclusive girls’ school. She began painting in Alexander Stoppler’s studio, in Cagnes-sur-Mer. “The south, the color, the light, the landscape of the Mediterranean would nourish her,” says Gazier. “She also, thanks to her older sister, became interested in yoga and the occult and dreamed of something spiritual, something higher than ourselves, something you might call cosmic.”

Raymond married the Dutch-Indonesian figurative painter Frédéric Klein, a pupil of André Lhote, in 1926, when she was just 18. The couple moved to Paris, and two years later, their son, Yves, was born. They led a bohemian life in Montparnasse, where their friends included Cubist painters Jacques Villon and František Kupka. In 1932, they moved back to the South of France, where Raymond studied at the decorative arts school in Nice, winning a commission for a fresco for the Alpes-Maritimes pavilion at the 1937 International Exhibition. During World War II, they settled in Cagnes-sur-Mer. There, Raymond met abstractionists Nicolas de Staël and Jean Arp and began painting a series of “Imaginary Landscapes,” luminous, colorful abstractions inspired by the local light-filled landscape. 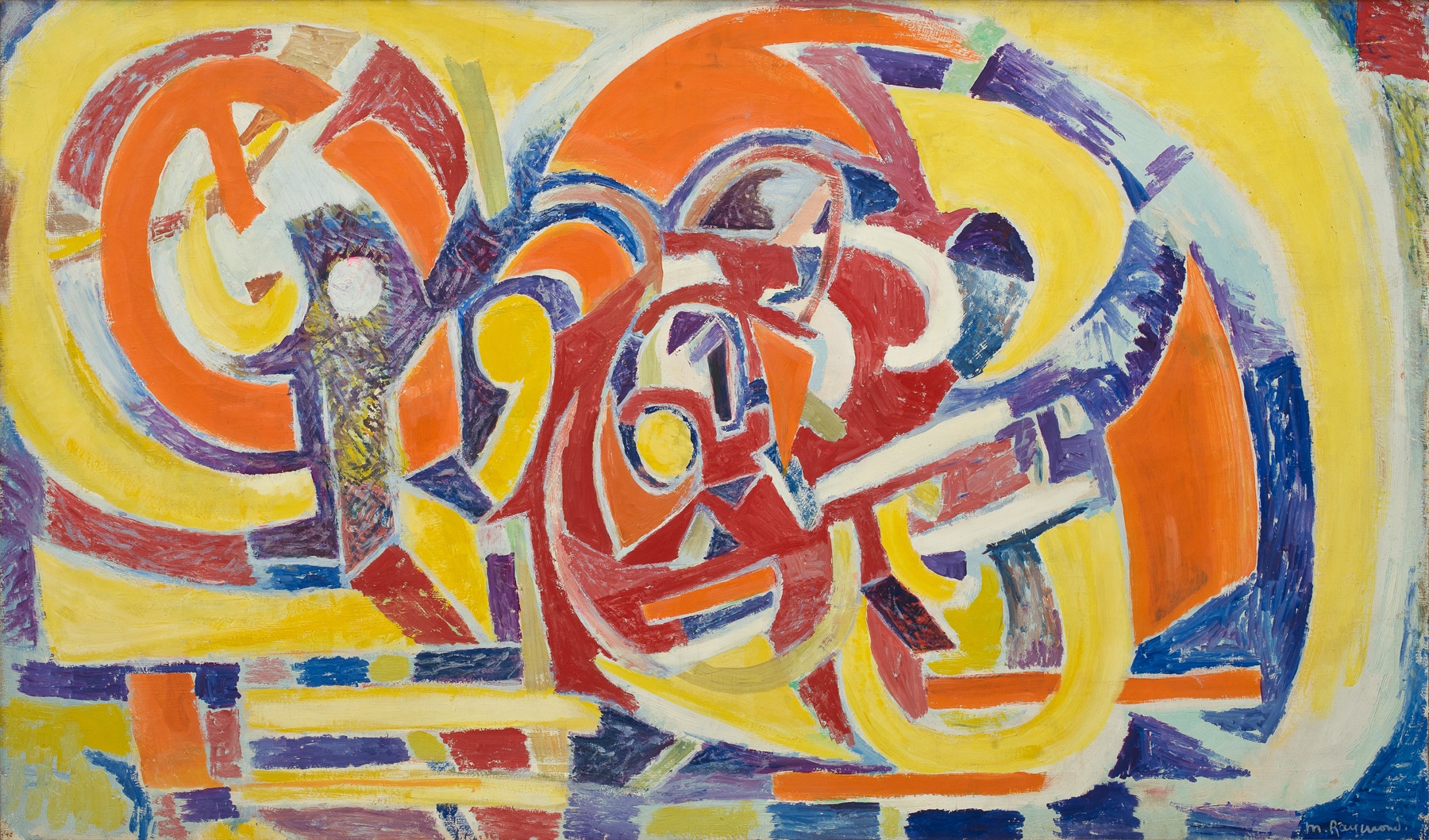 Following the war, she organized a salon, known as the lundis de Marie Raymond (Marie Raymond’s Mondays), held weekly in her apartment and regularly attended by numerous artists, critics and intellectuals. She also began showing in important salons and exhibitions, receiving the prestigious Kandinsky Prize in 1949. 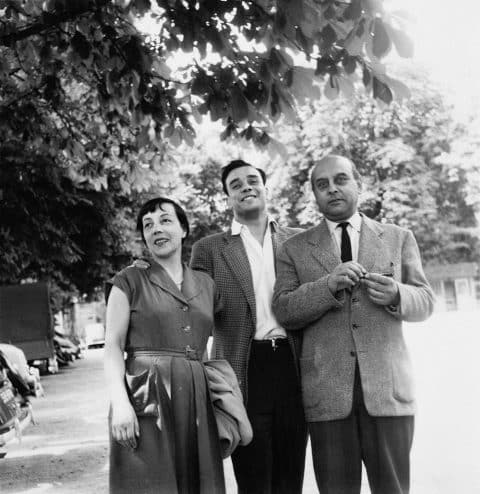 Raymond with her son, Yves Klein, and her husband, artist Fred Klein, in 1954

Despite Raymond’s many artistic achievements, a large part of her life was devoted to her son. “The exceptional environment in which she raised him would offer him a sense of what art was, a sense of what it was like to be an artist,” Gazier says. His work was deeply affected by her refined use of color, as well as by the spiritual aspects, both pictorial and philosophical, of her art.

In 1962, a year after Raymond separated from his father, Yves died from a heart attack, at age 34. “She would never recover from his death. When he disappeared so brutally, so unexpectedly, so young, something in her died too,” Gazier notes. “This premature loss of her son so hurt her that she could no longer be the same person and, in a sense, participated in her own disappearance, like a huge blue wave.”

“After the death of her son,” explains de Polignac, “Marie Raymond intentionally withdrew from her artistic life. She painted with the same force and the same internal need but alone, in the intimacy of her studio, although she maintained close friendships with such painters as Hans Hartung. Not unlike Paul Cézanne, she enjoyed the rare freedom of an artist working only for herself, immersed in her own creation, making no concessions to please anyone else — completely free.” 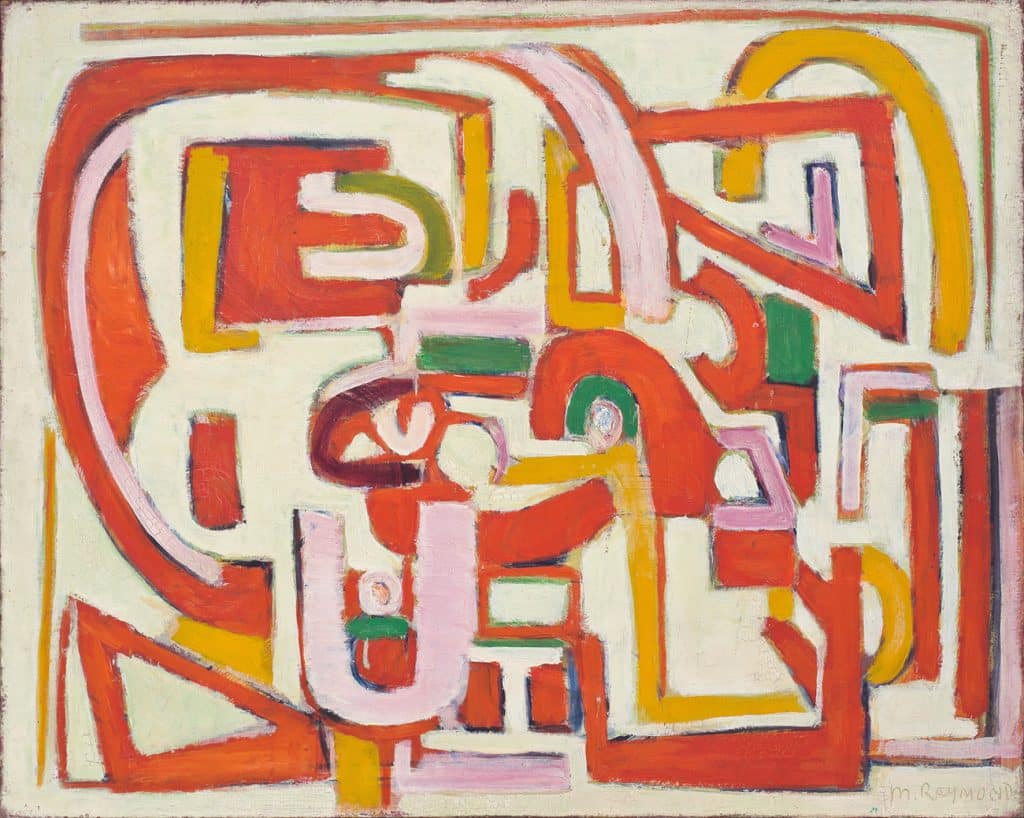 Raymond once said, “A painting is harmony, order, balance, created among the chaos of the colored world.” This belief is beautifully reflected in the works on display in “To the Light,” which covers her important abstract period, from 1946 to 1963, the year after Yves’s death. A strongly linear structure characterizes the pieces from the 1940s, when she first turned to abstraction, such as Rhythmes (Rhythms), a large-format oil from 1946, painted in vivid red, yellow and blue hues on a monochromatic white background; an untitled work from 1946; and Histoire d’Espace (The Story of Space), dated 1948. More evocative of nature is Paysage fond jaune (Landscape with Yellow Background), from 1947, whose delicate yellow and pale gray forms suggest the contours of trees or hills. 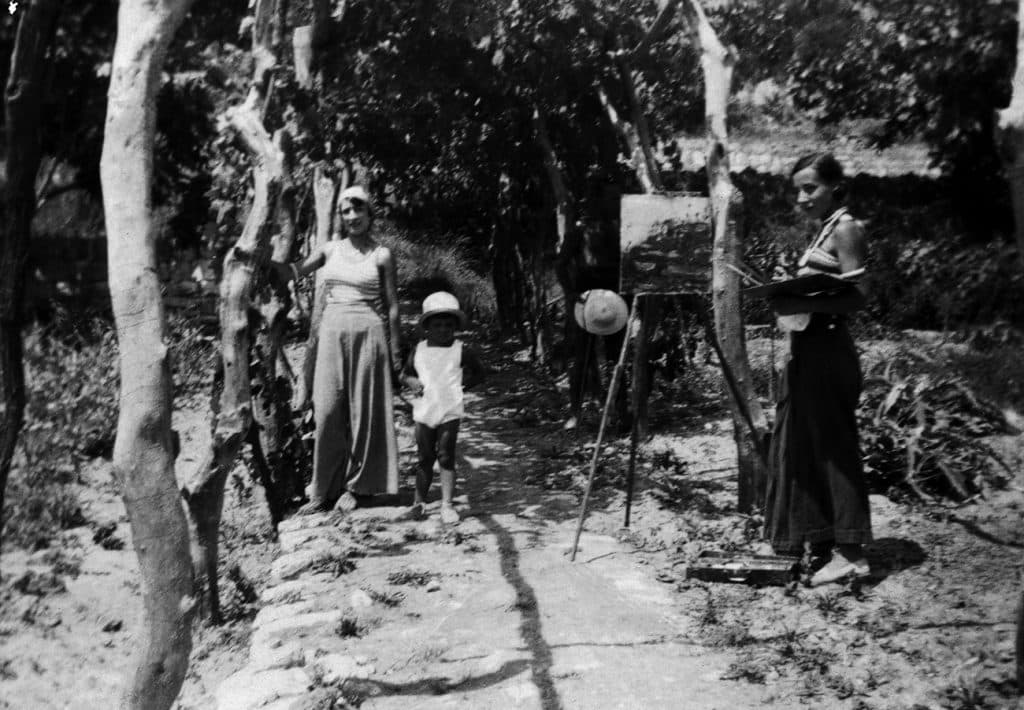 Raymond stands at an easel, with her sister, Rose Raymond, and son, Yves, at left in La Colle-sur-Loup, France, in 1932. 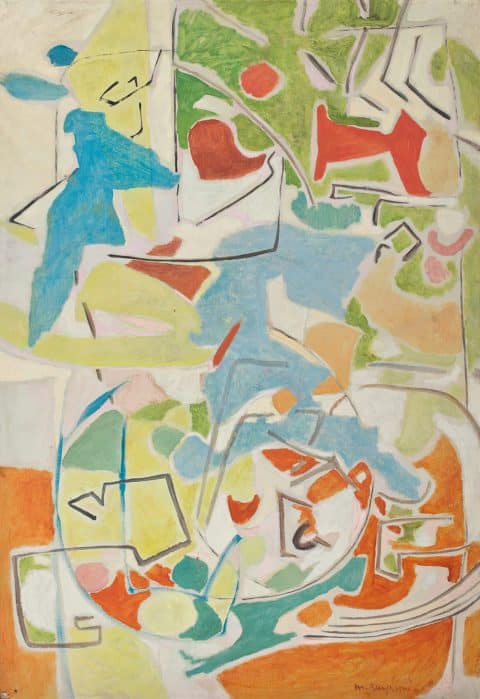 In the 1950s, Raymond shifted from linear structure to independent colored marks and forms. This is exemplified in the show by two untitled oil paintings, one from 1953 and the other from 1957, the year French critic Pierre Restany wrote that with her “delicate touch” and her “chromatic luminosity,” she was “the Berthe Morisot of abstract painting.” Seemingly freer and more spontaneous than her earlier works, these are composed of pale shapes and color patches floating against the background. In the 1959 Harmonie rouge (Red Harmony), 1961 Essor (Flight) and an untitled canvas from around 1963, Raymond continued to liberate herself from structure, making lyrical allover images. Although she showed her work less frequently, she continued painting until the end of her life, notably creating a cosmological series titled “Abstraction-Figures-Astres (Abstraction-Figures-Stars).”

The pieces in the current exhibition, however, represent her strongest period as a colorist and as a creator of lyrical abstractions. “She continued painting after Yves’s death,” says Gazier, “and even found solace in it, but she never recovered from her son’s passing. . . . Over time, her love for her son, who acquired an international reputation, obscured her own work.”

“She was a visionary,” de Polignac says. “Integrating the advances of Henri Matisse and Wassily Kandinsky, inspired by Pierre Bonnard and Vincent van Gogh, she created paintings full of light and color that convey a sense of great freedom and opened the way for such women artists as Joan Mitchell, Judit Reigl and Niki de Saint Phalle.

“Rediscovering Marie Raymond’s pictorial world is a gift,” Gazier concludes. “She is like a sleeping beauty who has been awakened by the aesthete’s and visitor’s eyes, spellbound by her youth and energy — a free woman.”