Nobody Does Earthy California Modernism Better Than Marmol Radziner 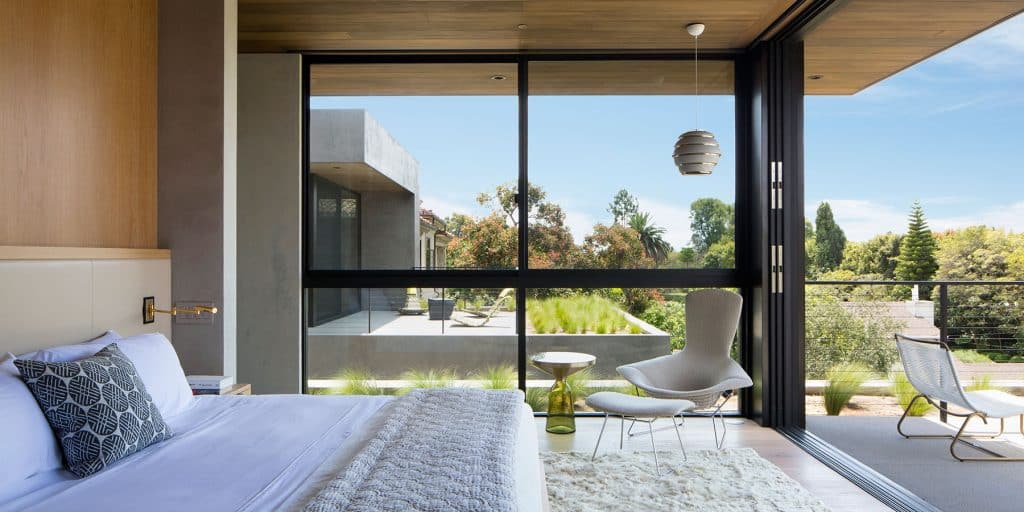 The Golden State firm is known for its muscular architecture, with an emphasis on materials that age gracefully and eco-friendly construction. 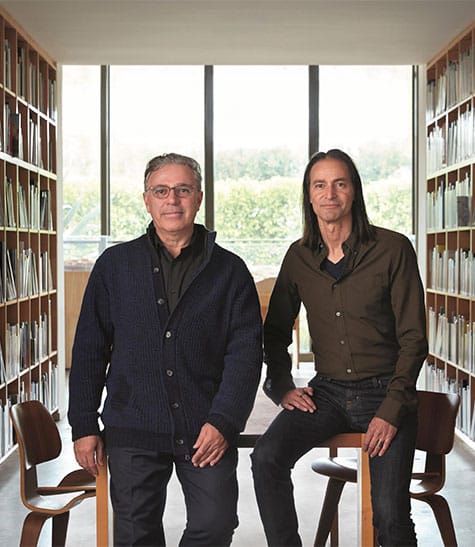 June 24, 2018Leo Marmol and Ron Radziner established their firm, Marmol Radziner, in 1989 and since then have built a reputation for respectful restorations and modernist homes. Top: This Los Angeles bedroom features a custom wood-and-leather Marmol Radziner bed. In the corner, an Alvar Aalto Beehive pendant hangs over a Harry Bertoia Bird chair and ottoman. Portrait and photo by Roger Davies

Any original thought inevitably spawns a tsunami of imitators. So it is with California modernism, a genre — itself derived from the Bauhaus and International Style movements — that revolutionized the way we build homes today, not only in the Golden State but across the globe. Because of its perceived simplicity, the style has been aped and altered in countless infelicitous ways. It’s rare to find innovators who can move it along the architectural continuum into novel territory. And yet they’re out there — and right at the source, as it turns out.

“If you care about architecture, to this day you’re constantly looking at the California modernists’ work,” says 58-year-old Ron Radziner, design principal and cofounder, with managing principal Leo Marmol, at Los Angeles–based Marmol Radziner. “What we do has roots, certainly, in the work of California architects of the past. I feel good about that. I respect what they did. But we’re exploring our own path. I like architecture that very much is at peace with the nature around it. I’m not interested in white homes that stick out from nature.”

More on that in a minute. The salient point here is the distinctiveness of Marmol Radziner’s work, which has garnered international acclaim and a roster of impressive clients: Tom Ford, Steven Meisel, Ellen DeGeneres, Bradley Cooper, cinematographer Robert Bridge Richardson and Red Hot Chili Pepper Anthony Kiedis, to name just a few. What’s more, the architects are often tapped to restore masterpieces by the progenitors of SoCal modernism, such as Richard Neutra, Rudolph Schindler, John Lautner, Cliff May and Albert Frey. Not many firms can boast connections to both ends of the continually unspooling thread of a groundbreaking style. 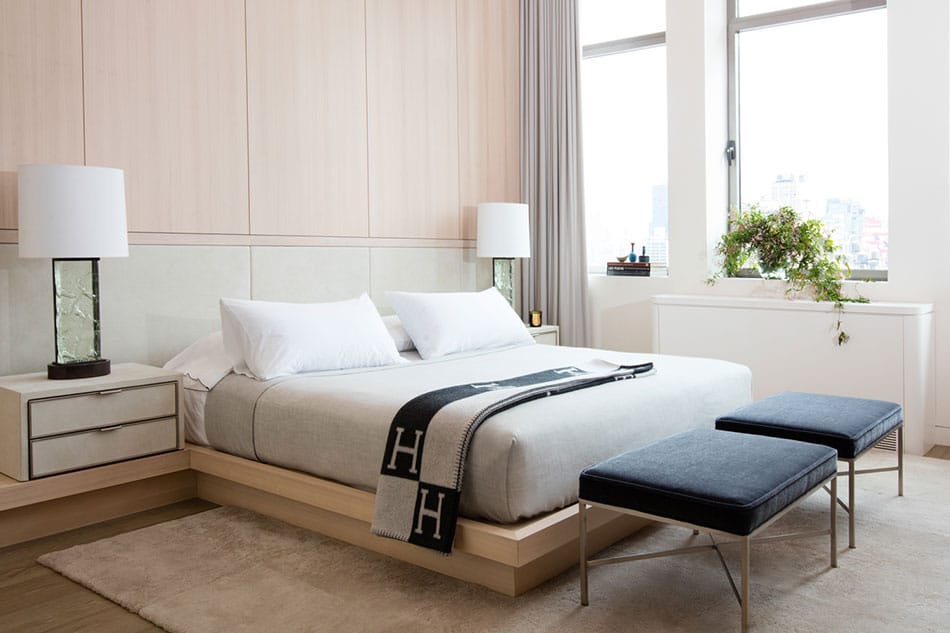 Marmol Radziner designed the bed and nightstands for this bedroom in New York’s Chelsea neighborhood. An Hermès throw and a pair of Paul McCobb benches complete the space. Photo by Julie Holder 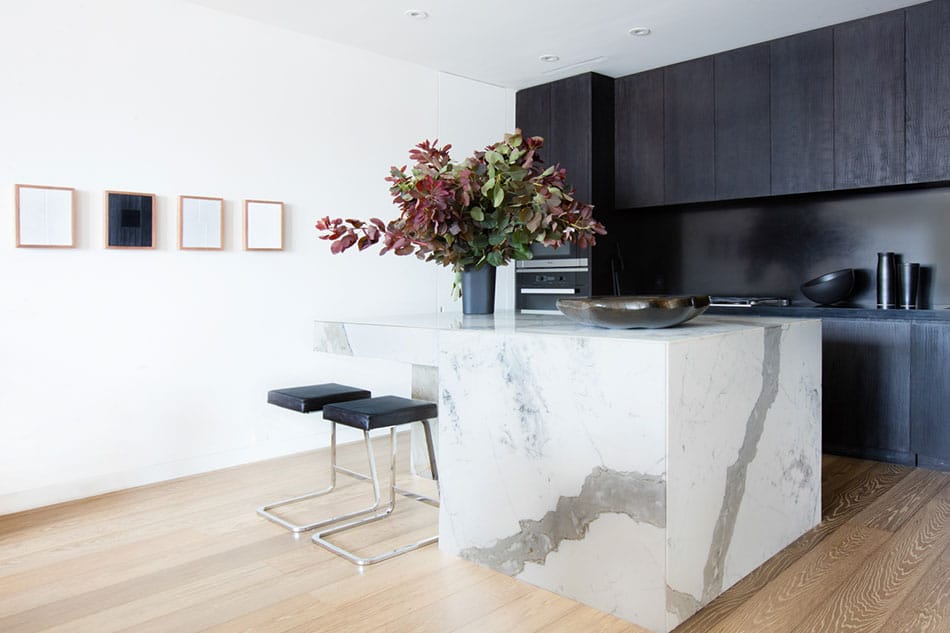 In the kitchen of the same Chelsea apartment, a marble island includes a breakfast bar with a pair of Ludwig Mies van der Rohe Four Seasons stools. Hanging on the wall is the four-part work Untitled, 2015, by Anthony Pearson. Photo by Julie Holder 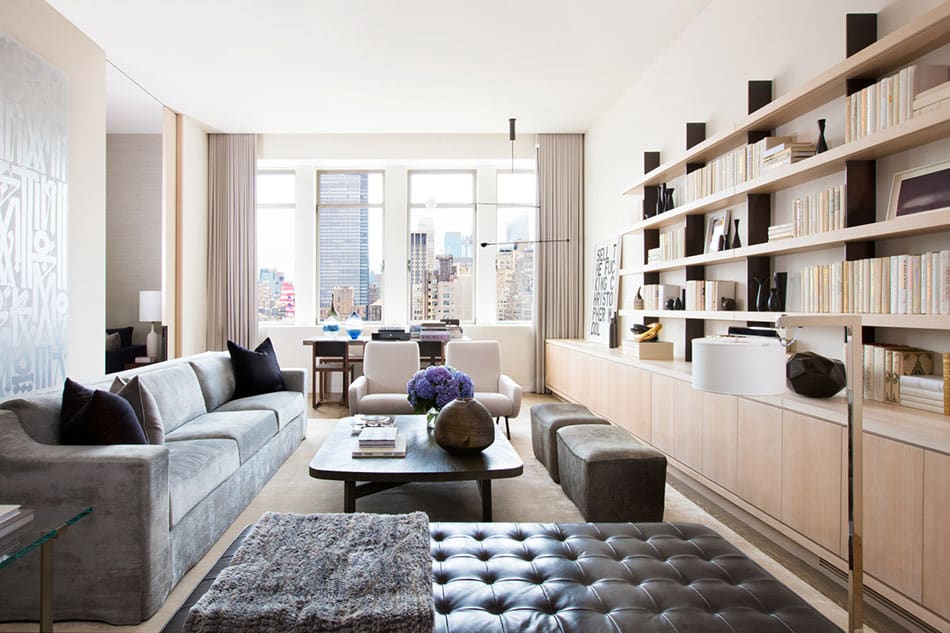 The living room features artwork, such as Secksy, 2015, by Retna and, leaning against the opposite wall, a piece by Christopher Wool. Furnishings include an India Mahdavi sofa, a pair of Marco Zanuso Lady chairs and a Jean-Louis Deniot coffee table. Photo by Julie Holder 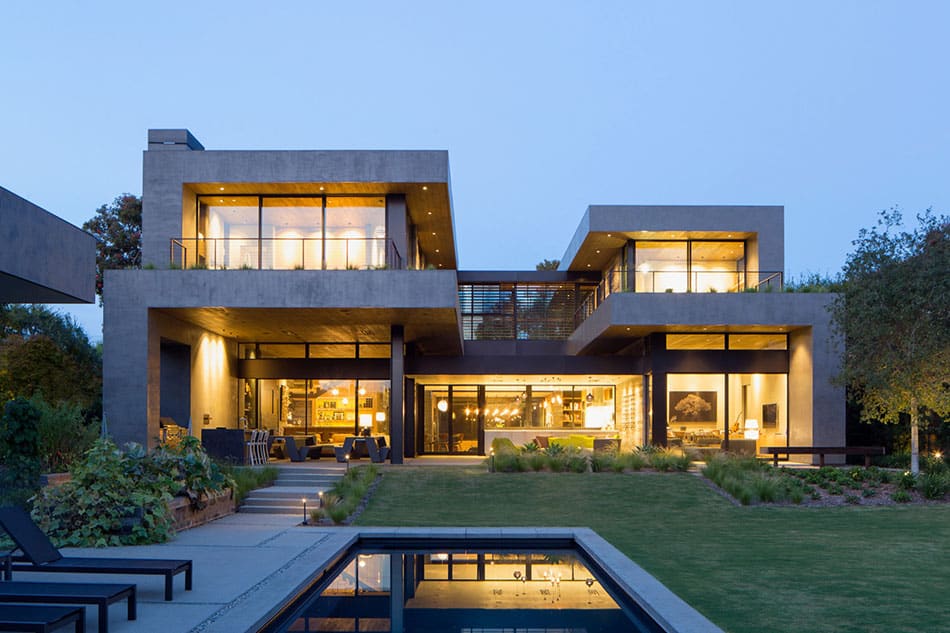 The rear facade of a Marmol Radziner–designed home in the Brentwood neighborhood of Los Angeles. Photo by Roger Davies 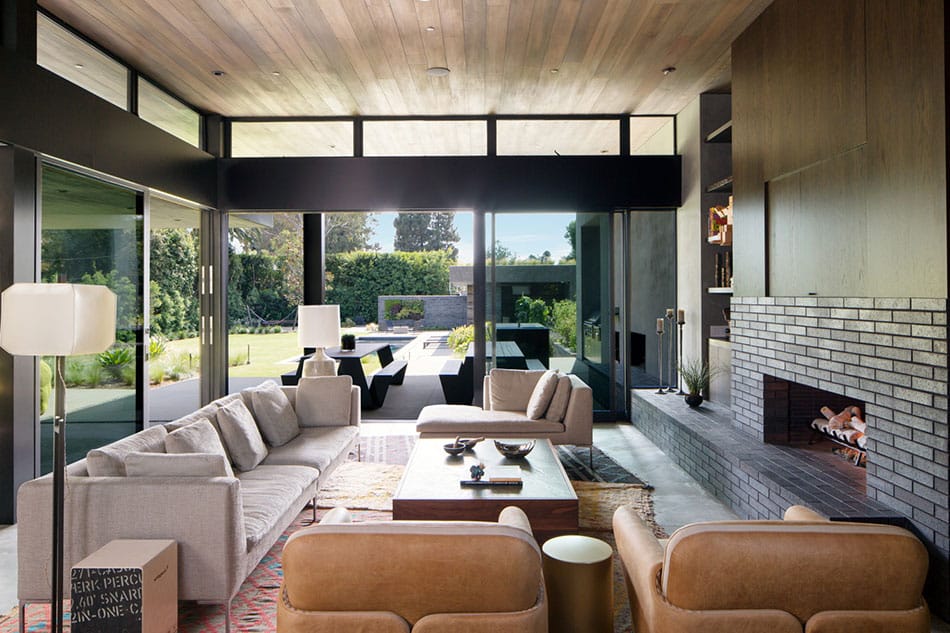 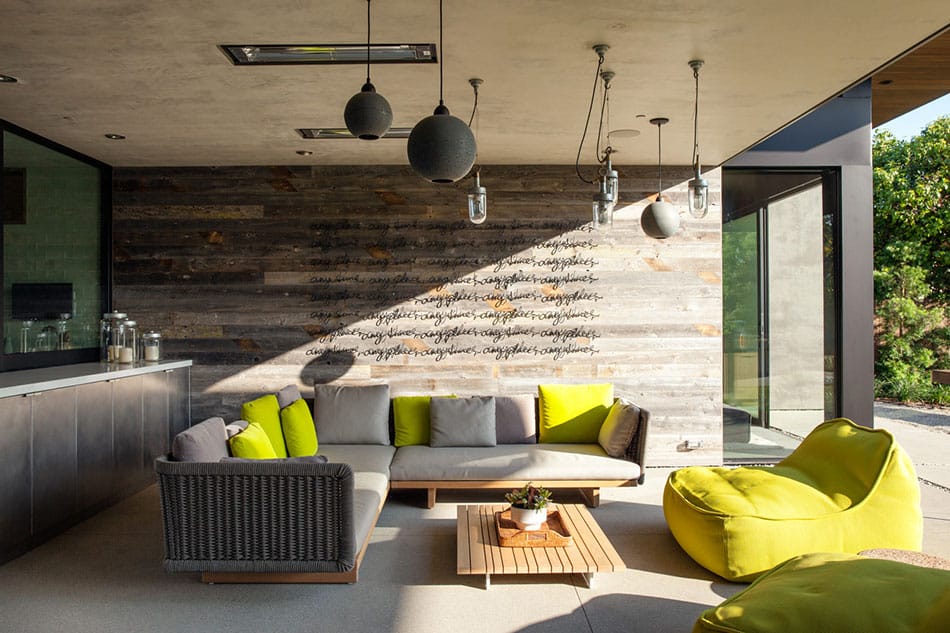 This airy indoor-outdoor space has a neutral palette with pops of citrine, as in the Paola Lenti Float chair and the cushions on Lenti’s Sabi sofa. Photo by Roger Davies 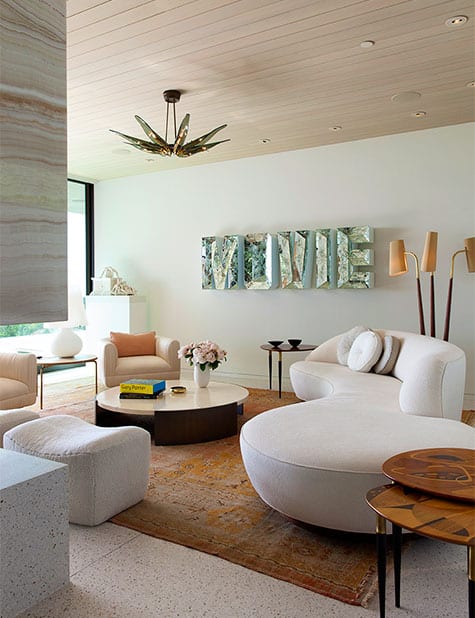 As is so often the case in this field, the partners began modestly. They established their firm in Venice, California, in 1989, with one employee and a handful of projects: a restaurant, a small apartment, home additions. “I’ve always been drawn to residential work,” Radziner says. “But when you’re young, the variety is very useful, because you’re learning everything.” Born in Los Angeles, Radziner got a very early aesthetic start. “Whether building sand castles or structures out of Legos, or even using leaves on the grass, I was always making things,” he recalls. In 1984, he earned his bachelor of science degree at California Polytechnic State University (Cal Poly), in San Luis Obispo, and two years later, he completed his master of architecture at the University of Colorado in Denver. He and Marmol met at Cal Poly, where Marmol, born in L.A. in 1961 and raised in the Bay Area, earned his bachelor of architecture degree in 1987. The following year, recalls Radziner, “Leo came down to L.A. Each of us got a little work here and there. Organically, we decided to work together.

A few years into the practice, the duo became unsatisfied working with small contractors who didn’t know much more than they did. Marmol, in particular, was well-versed in construction. “We were both born here, but our parents were immigrants, he says. “Ron’s are from the Netherlands, and mine are from Cuba. As first-generation immigrants, we had to work to get through school. During college, I worked at a design-build firm on the construction side, so I learned how things were actually built.” As a result, adds Radziner, “we felt we should just build our projects ourselves.” They established a metal workshop at first. Then came their big break, which allowed the firm to expand over time into the full-service design-build company it is today.

That break, in 1993, was the restoration of Richard Neutra’s 1946 Kaufmann House, in Palm Springs. If any modernist building can be called iconic, it’s this one, thanks to the famous photographs by Julius Shulman. (Slim Aarons’s Poolside Gossip, has also contributed to its allure.) But subsequent owners had added onto it, increasing its square footage from 3,200 to 5,100 and practically obliterating the original structure. Beth Harris, who had bought the property with her husband, Brent, was pursuing a Ph.D. in architectural history at UCLA at the time and learned of Marmol Radziner through a mutual friend. “When the Harrises met with us, there was obviously something compelling to them about having the people who were restoring it also building it, putting their hands on the building,” recalls Radziner. “They got that it was just a smart way to do the project, to have a group that cared about the architecture, but also about how it was made.”

Naturally, the historic seven-year commission made its way into the media. A steady flow of projects followed, allowing the architects to further hone their own style. 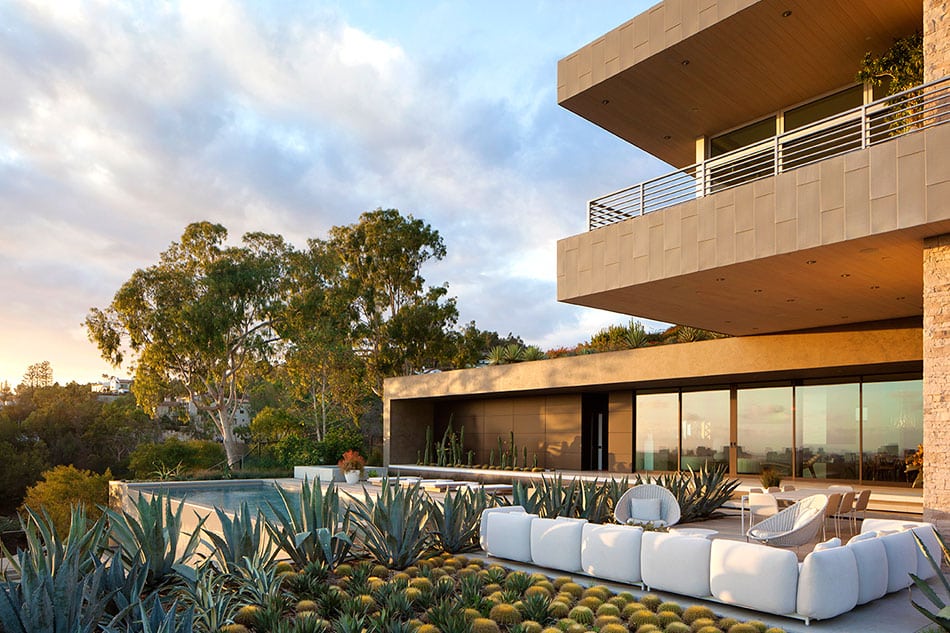 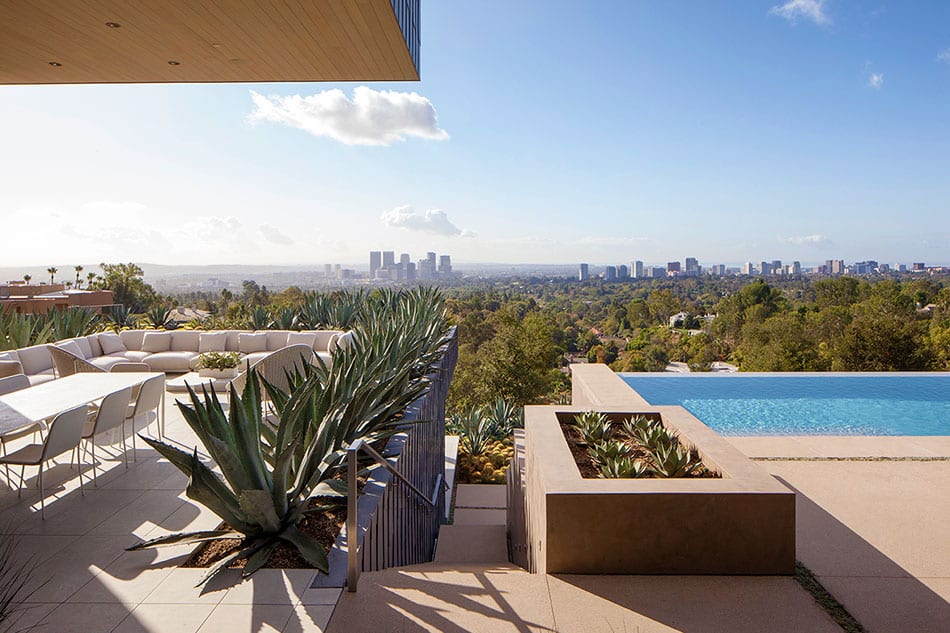 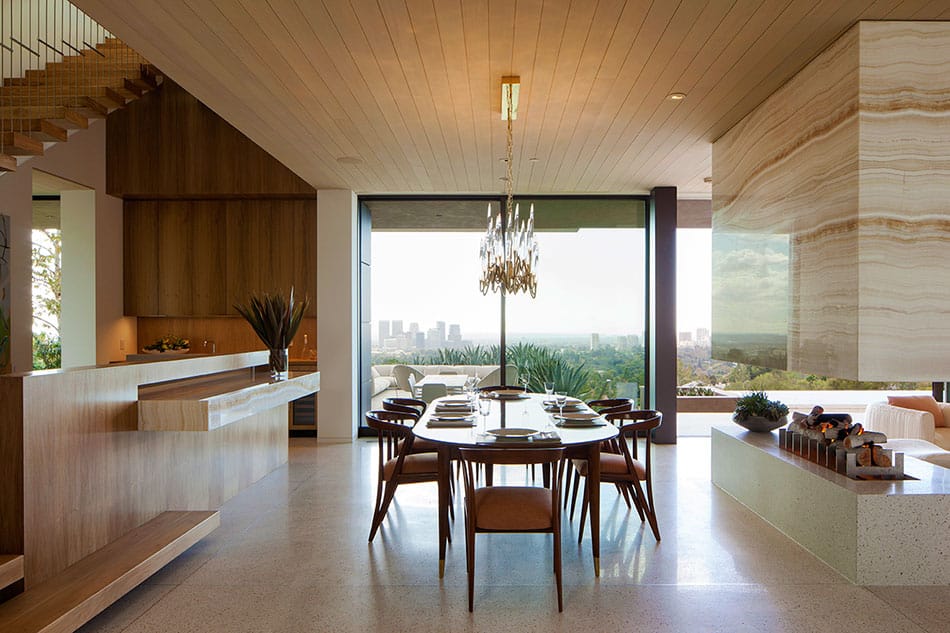 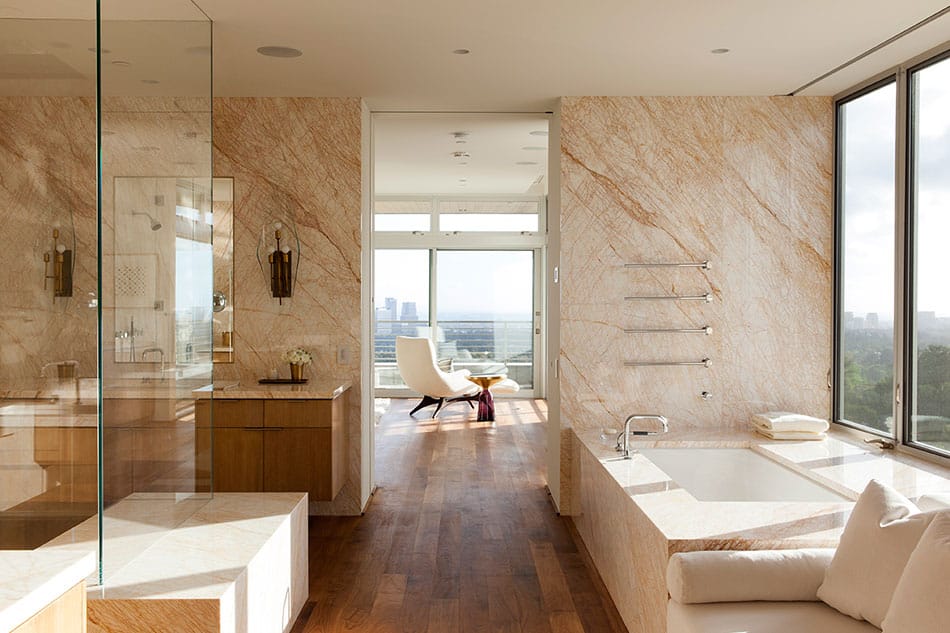 In this marble-walled bathroom, Marmol Radziner designed the bleached-walnut vanity and the built-in sofa beside the tub. Sconces by Giò Ponti for Fontana Arte flank the mirror. Photo by Roger Davies 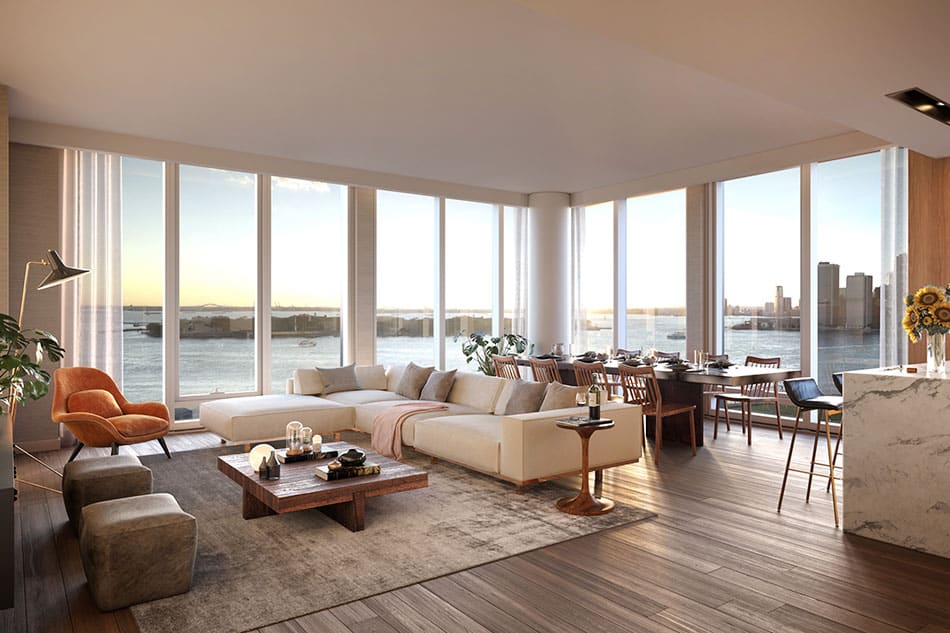 Quay Tower is a 126-unit waterfront condominium in Brooklyn Heights and the firm’s first multifamily building in New York. Rendering by Moso Studio 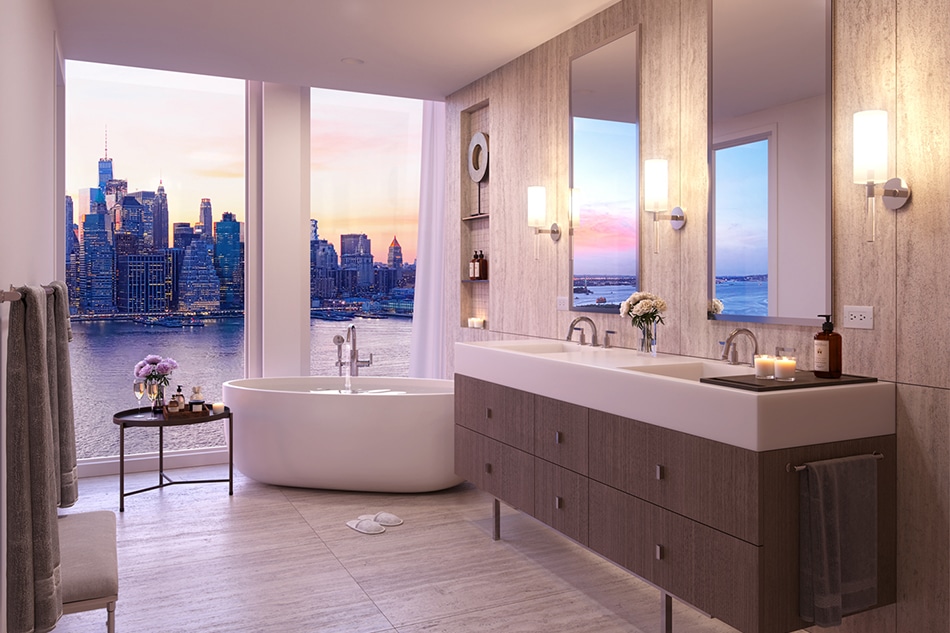 The bathroom of this unit features a soaking tub next to floor-to-ceiling windows affording sweeping views of Manhattan. Rendering by Moso Studio

Radziner describes the firm’s approach this way: “I like weight in architecture, a sense you’re grounded and part of the earth, and pretty rational in form. Some mid-century work can be a little precious. We like to think our work can survive as nature takes over. There’s a strength to it.” Their houses tend to be long and narrow, inviting natural light and breezes in more readily than a square would; air-conditioning isn’t always required, even in hot climates. Which brings up the issue of sustainability, something about which both men are passionate. They often rely on recycled building materials, and more than half the firm’s newly constructed houses employ photovoltaic solar power. “The clients who come to us are generally already interested in these ideas,” Radziner explains. 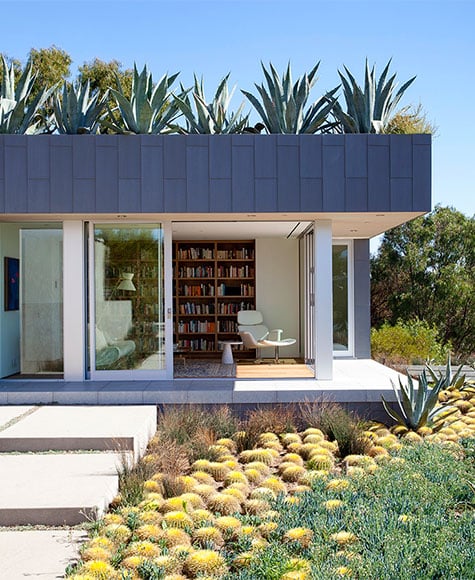 The library of this Beverly Hills home includes bleached-walnut built-in bookshelves, a Pierre Paulin Tulip lounge chair and an Angelo Mangiarotti Eros side table. Marmol Radziner also did the landscape design, including the green roof. Photo by Roger Davies

The sum of these parts is a muscular brand of modernism that is often — although not exclusively — darker, earthier and heavier than the more ethereal, barely-there glass boxes made famous by the California modernists. Even so, Marmol Radziner structures never lose their link to nature: They are often collections of volumes connected by glass-lined corridors and bridges suspended above the ground. Their interiors, notes Radziner, are “a combination of custom designs, contemporary furniture and great vintage pieces.” With the latter two categories, he says, “it’s about trying to find beautiful proportions and materials that age well or, if they’re antiques, have aged well.”

Marmol Radziner has expanded steadily over the years and currently offers architecture and construction services; restoration; and interior, landscape, furniture and even jewelry design. There are about 100 employees in the office and another 120 on the construction side. And there is a book in the works, to be released next spring by Princeton Architectural Press. About 70 percent of the firm’s projects are private residences, but it also has on the drawing table commercial commissions — among them, a waterfront resort in Puerto Rico and Quay Tower, a 126-unit condominium in Brooklyn Heights that is the partners’ first multifamily building in New York — and restorations, including that of a 1920s Roland Coate house with later renovations by A. Quincy Jones. An earlier prefab venture has morphed into occasional collaborations with the Lindal company (two homes in Kauai), and the latest of many furniture designs debuted through McGuire last fall.

“I like to think we’re at the place we’d like to be,” says Radziner. Which is say, Marmol Radziner has long since arrived. 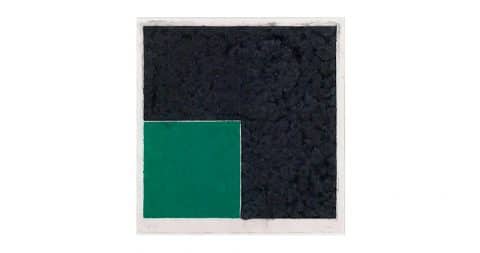 “This image is powerful in its color composition and textural qualities.” — LM 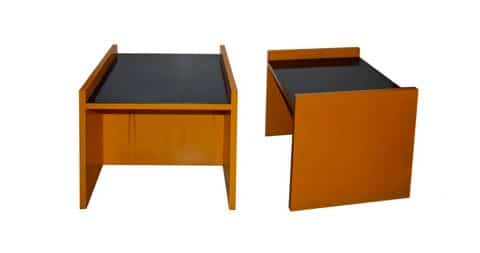 “Having restored many Neutra homes, I always enjoy finding his furniture designs, especially these pieces, which remind me of Japanese woodwork.” — LM 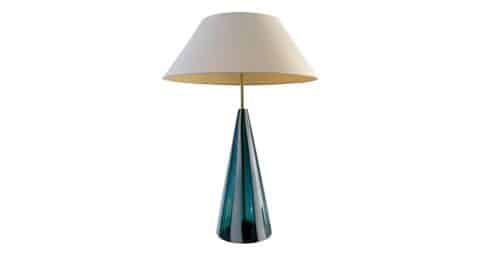 “I enjoy the calm and playful presence of this lamp.” — LM 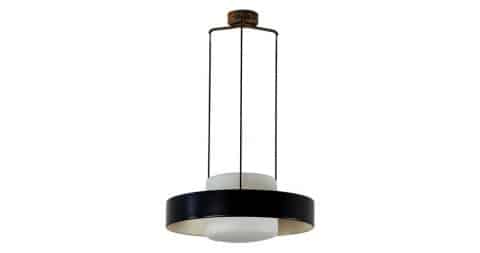 “This chandelier exhibits that careful balance of structural lightness and weight we often seek with our architecture.” — LM 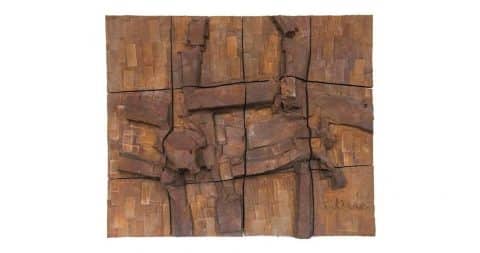 “This is a visceral piece that would bring a powerful natural element to an interior space.” — LM 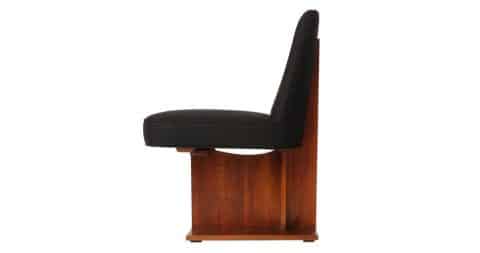 “This is an example of beautiful woodwork and use of rosewood by a designer we always return to in our interior projects.” — LM 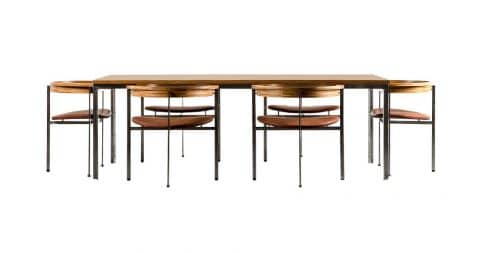 “I love how light, delicate and low this dining set is. There is a beauty in how the tops of the chairs do not break the sight line of the tabletop and how the ends of the chair arms tuck just under the table edge. The contrast of the unchangeable plated steel juxtaposed with ever-changing wood and leather is really lovely.” — RR 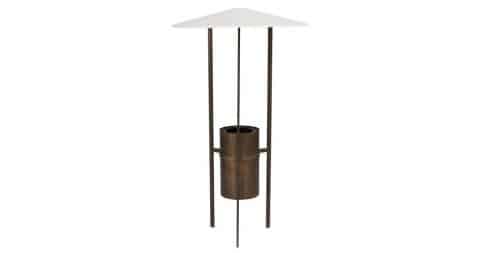 “The way the light reflects off the top to create a downlight makes this lamp perfect for next to a chair. The brass patina combined with the soft light reflected off the white is really nice.” — RR 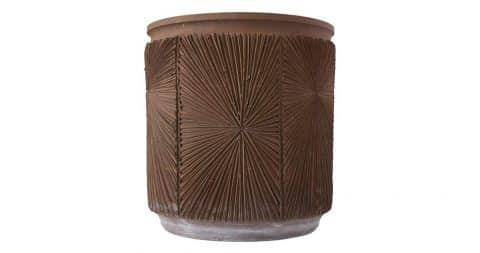 “This is a particularly cool, very seventies California example of what I am always looking for at my own house: raw clay, unglazed, something that will wear over time in the garden.” — RR 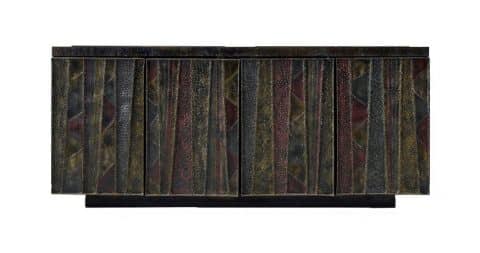 “This is just a really pretty, classic piece. I like the dark palette of what is essentially an abstract painting to me.” — RR