Mary Fox Linton Has Always Been Ahead of Her Time 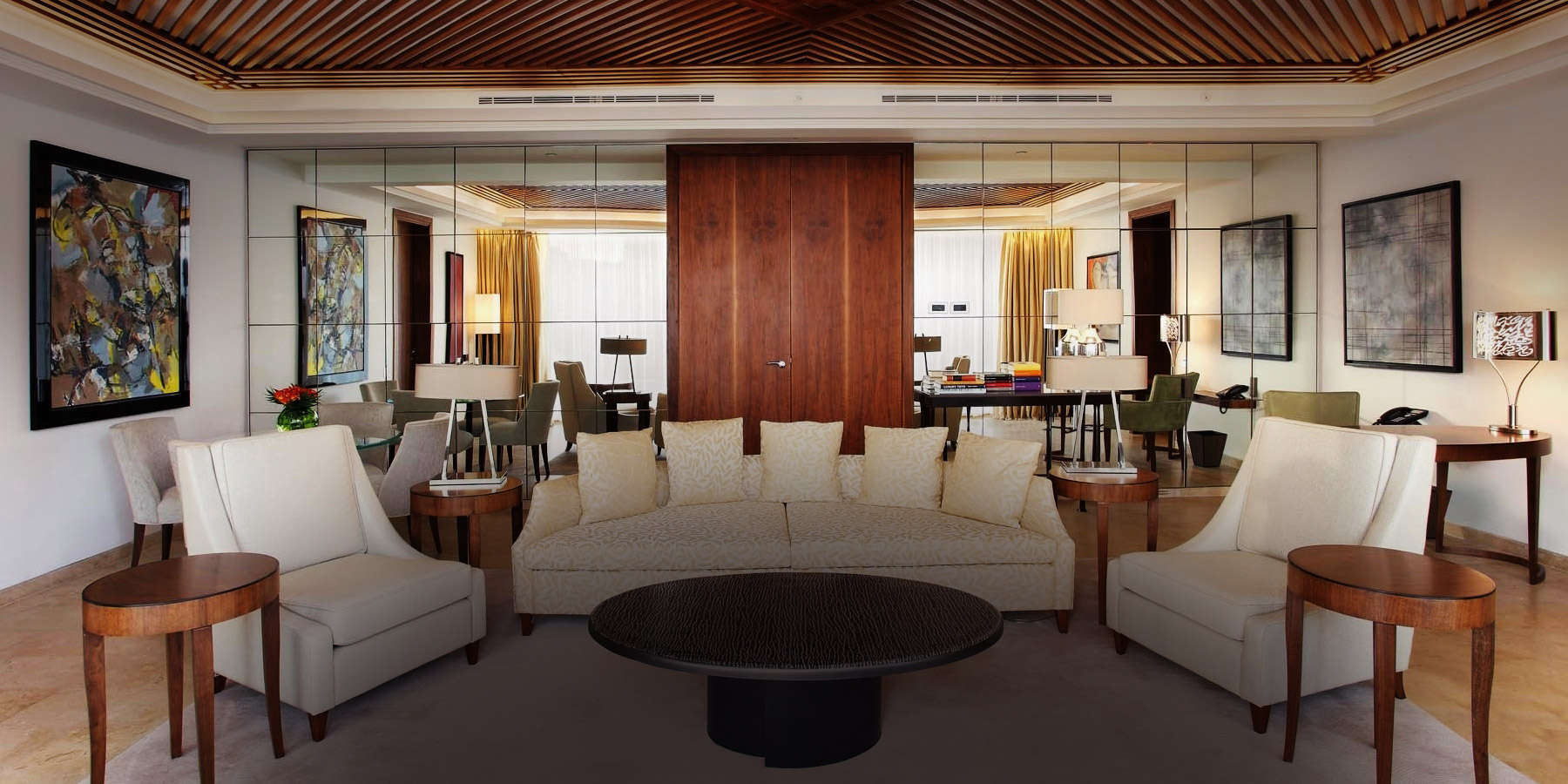 Back when English design was all brown furniture and frilly florals, Fox Linton proved herself a modernist maverick. Several decades on, she hasn't stopped innovating. 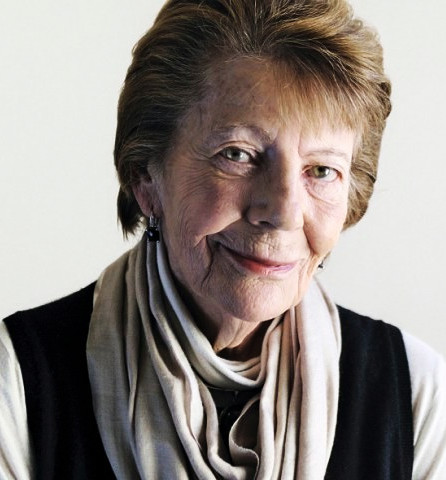 There is nothing you can do that is more likely to make Mary Fox Linton wince — albeit in the most elegant manner possible — than to call her a grande dame. But, whether she likes it or not, Fox Linton has most definitely achieved grande dame status, not just because her eponymous studio, Fox Linton, now counts an astonishing 50 years of history behind it, but also because she’s one of the most highly regarded interior designers in the world. That said, there is not a hint of the grande in Fox Linton’s manner­ — quite the opposite, she is warm, witty and enviably energetic, and as excited today by her work as she has been for decades. “It is a wonderful profession,” she says. “I have been lucky to have traveled and witnessed so many different cultures. You see and learn so much, and you go on learning all the time.”

Today a consultant to the practice she founded, Fox Linton has put the bulk of the work in good hands: a studio of 15 designers in London’s West End, overseen by Dennis Irvine and Peter Young, who take on blue-chip projects around the globe, including hotels, spas, commercial spaces and private residences. The firm’s ethos, however, remains unchanged. “We are about quality, innovation and offering bespoke service,” says Fox Linton. “Our clients have a right to a design that is for them alone, and one that is different from all the other projects we undertake.” 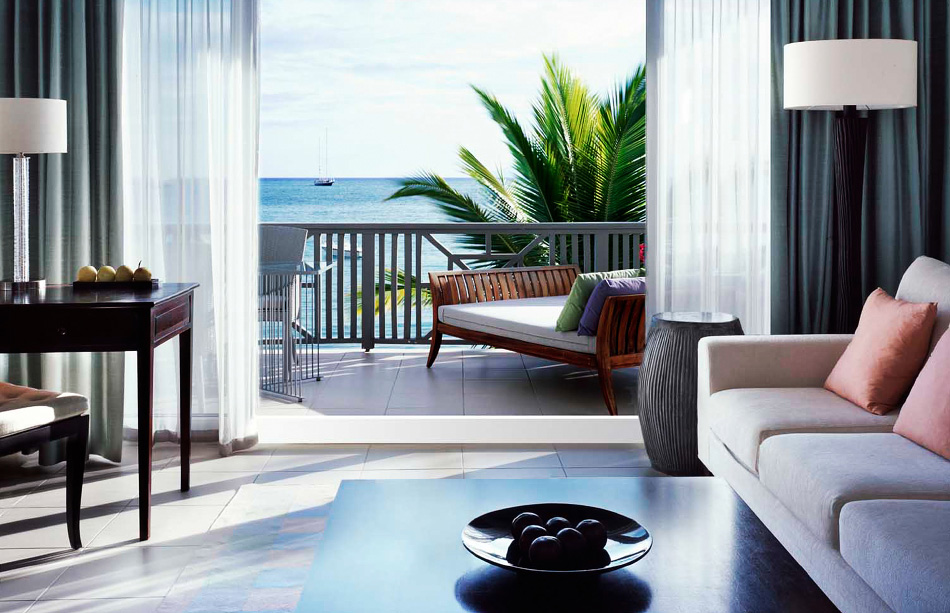 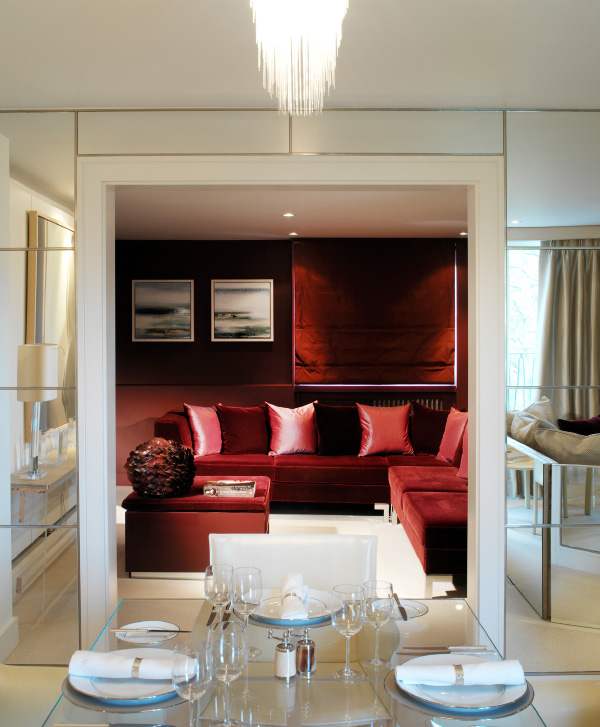 Fox Linton installed a deep-red sofa of her own design in an apartment in London’s Belgravia.

Coming from a family where architecture was the profession of choice for most of her relatives, Fox Linton was steeped in the subject as a child. “Even my mother trained as an architect,” she recalls, “although she wasn’t allowed to take an exam or practice in those days.” Only her father, whom she calls “a larger-than-life character,” broke the mold, serving as the head of the Canadian Pacific Railway Company in Europe. She describes her family home in the south of England as full of life and color. “Other houses seemed very brown in comparison,” she says. “Ours was more fun, full of happiness and light and joy.” It was a privileged upbringing, to be sure, a tapestry of garden parties and maids in floral uniforms designed by Fox Linton’s mother.

Fox Linton herself also studied to be an architect. She was never licensed, however; marriage and motherhood got in the way. “It was then a chauvinistic profession,” she says, “but that is not what put me off. I was widowed very young and needed to do something that fitted around raising a child. Interior design seemed a natural alternative.”

Back in 1950s England, interior design as a profession barely existed. “There was Syrie Maugham and Sibyl Colefax and really not that much else,” she says. “Everything was traditional: brown furniture, frilly lampshades, tired sofas and chairs and hunting prints up the stairs.” A modernist from girlhood, Fox Linton never related to this look. She favored white walls, white floors, curtains in plain fabrics, geometric patterns and bold color-blocking, such as blue with white and camel or accents of black or red against gray. It was a fresh look that revolted against drab Hessian carpets, magnolia walls, damask curtains and the ubiquitous rubber plant, and it allowed light to flow through houses, too. Fox Linton hated reproduction furniture, but she loved antiques, searching all the time for pieces that looked at home both in modern and historic settings. With her architectural background, restoration projects came quite naturally to her as well, and she used these to show off skills that went beyond interior decoration. 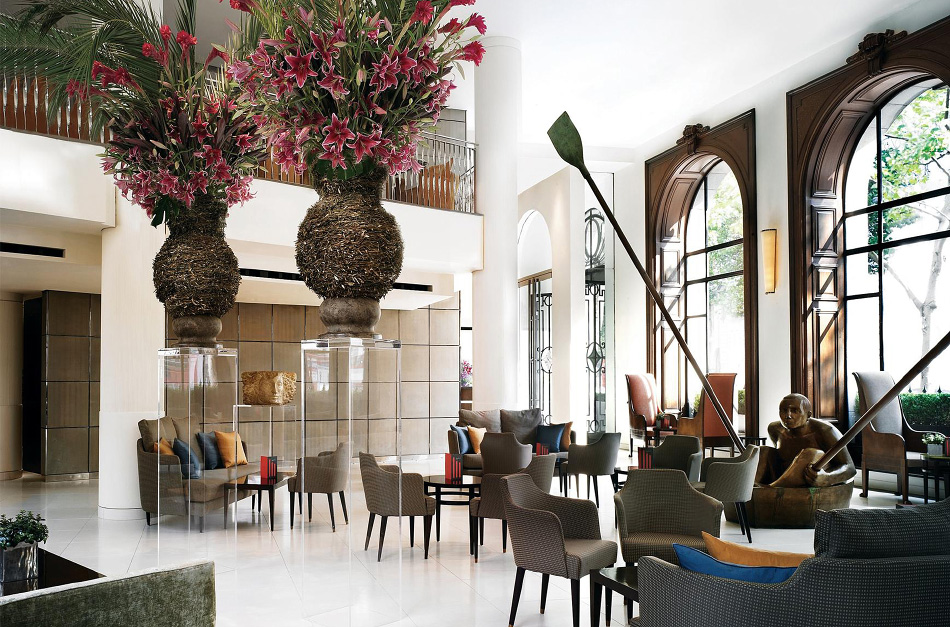 Fox Linton’s design for the Lobby Bar of London’s One Aldwych, a property that defined the aesthetic of the boutique-hotel boom when it opened in 1998, features a sculpture by André Wallace. 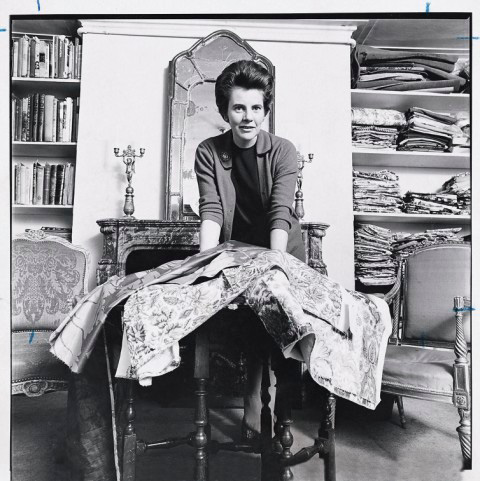 Fox Linton at home with her fabric library in the 1960s

She started to pick up residential clients via word-of-mouth — and, perhaps unsurprisingly, they were seldom English. “Mainly, the houses I did belonged to Americans or Italians or Swiss, all people residing in London,” she recalls. “The English people I knew then would buy what I thought was hideous reproduction furniture but never anything modern. The same went for paintings. They detested contemporary art, which I loved. They absolutely hated what I did.”

By the mid-1960s, Fox Linton had remarried and had three more children. She continued traveling and working abroad, keeping her business jogging along, but working it in around her family life. “It was all so much easier back then,” she says with a laugh. “People would just say, ‘Will you do my house for me?’ And I would say, ‘Yes.’ There were few formal contracts or anything like that. I don’t even remember ever sending an invoice.”

Based in Chelsea, Fox Linton enjoyed friendships with many other interior and fashion designers of the day, among them David Hicks. In the early 1970s, the two collaborated on various projects, including apartments in London and homes in the English countryside. By this time, her commissions were expanding to locations the world over, a natural result of her having so many international clients. “I was lucky that people saw what I liked and decided it was what they wanted, too.” She founded Fox Linton Associates in the early ’70s, by which time her client base included the film director David Lean, the Maharani of Jaipur, a queen (she won’t divulge which one) and many eminent people from the worlds of finance, politics, entertainment and the English aristocracy. One of her Middle Eastern clients turned out to be a gunrunner who had to flee the country. “Charming man,” says Fox Linton, evincing her naughty sense of humor. “He paid our bill in full.”

“I hope that anyone looking at our work will see a thumbprint of quality and individuality while also recognizing that we are constantly moving things forward.”

It was the boom years of the 1980s, however, that really moved Fox Linton up another notch. “That was a time when a lot of young people were making a lot of money very quickly from the financial explosions in the stock market,” she recalls. “They were buying houses, and they did not want them to look like mummy’s house. So they came to me.” 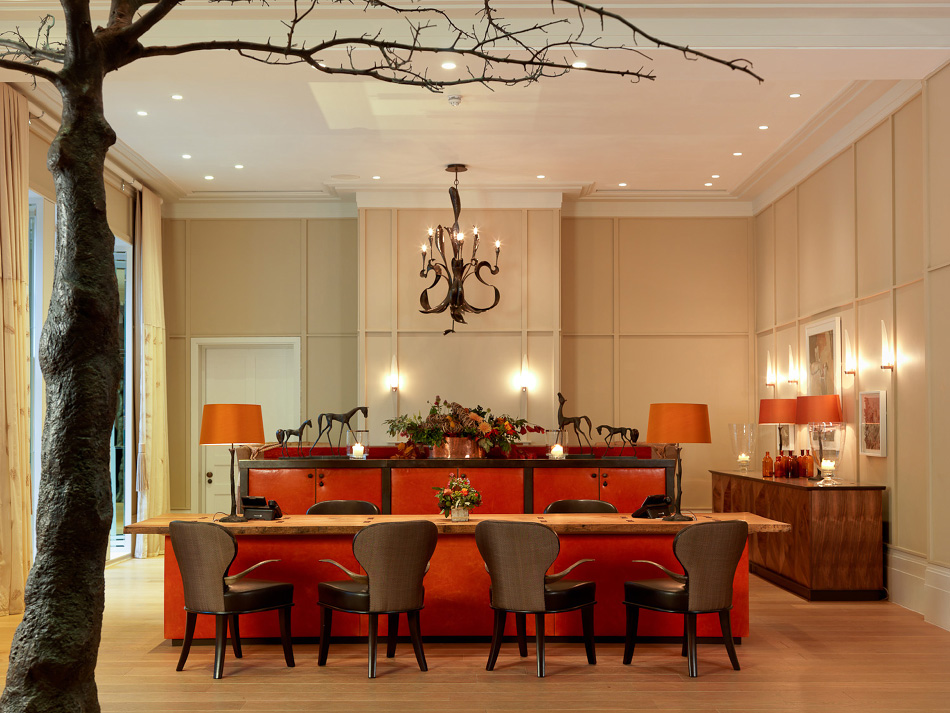 Red and copper hues bring warmth to the reception area of Coworth Park, a hotel outside London.

The recently opened Lounge at One, in the Aldwych, exhibits artworks that reference the building’s history as a newspaper office.

For so long divided into design camps of “chintz with everything” or “pine with everything,” England was finally catching up with Fox Linton’s own taste. A sophisticated elite came to see the beauty and benefits of a style that was unapologetically contemporary but never cold. Today, it amuses her that the children of those ’80s yuppies are now arriving on her doorstep with their own wives and husbands, asking her to take on their houses.

The 1990s marked her ascent into large-scale projects, including hotels. The first of these to receive public acclaim was London’s One Aldwych, a collaboration with hotelier Gordon Campbell Gray. In many ways, the hotel — with its sleek gym, spa, indoor pool and cinema — set the standard for a new wave of luxury boutique hotels around the world. “That hotel was the first of its kind,” explains Fox Linton. “It was contemporary but British contemporary. Campbell Gray had a vision of what the public would expect and want in future years. Best of all, the 400-plus artworks were all originals — not a print or reproduction among them.”

Last year, Fox Linton returned to the hotel to work her magic once more on the public areas. One new feature is the Lounge at One, a private guest area akin to a super-comfortable residential apartment, which includes a media section with iPads, daily newspapers and magazines, and a selection of the finest art books published by Rizzoli and curated by the acclaimed British designer Paul Smith. Artwork and objets — such as old printing-press blocks — reference the hotel’s former life as the home of The Morning Post. 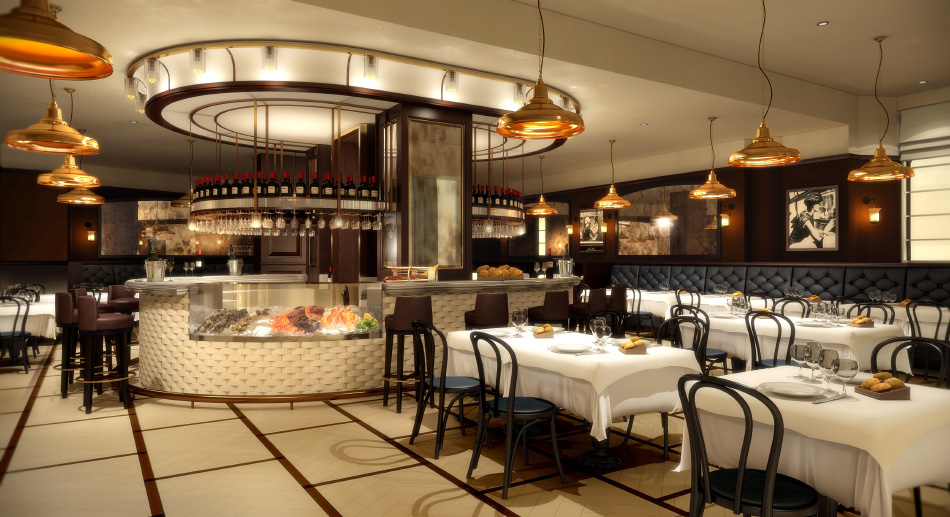 The bar and dining room of Galvin Brasserie de Luxe at the Caledonian hotel, in Edinburgh 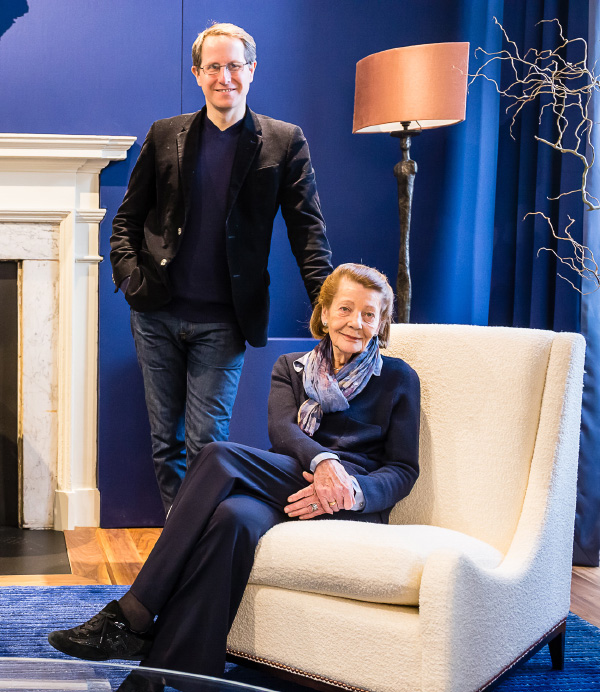 Fox Linton and Peter Young, a director of Fox Linton Associates, recently designed a room for “Wool House,” an exhibition paying homage to the use of wool in interior and fashion design, at Somerset House, in London.

Fox Linton Associates has overseen many a fabulous hotel reincarnation, among them the Dorchester Collection’s Coworth Park, just outside London near Ascot; Turnberry, one of Scotland’s most famous golf hotels; the Caledonian in Edinburgh; and London’s brand new Wellesley in Knightsbridge. A palace in the Middle East now counts among the firm’s residential projects.

Happily, Fox Linton herself shows no signs of slowing down. When not in the studio, she divides her time between a house in the Dordogne, in France, and an apartment in south London. Her four children (and seven grandchildren) are always close at hand. “I must have done something right, because they’re all still talking to me,” she says, laughing.

Fox Linton is too modest to sing her own virtues, but she will say, “I hope that anyone looking at our work will see a thumbprint of quality and individuality while also recognizing that we are constantly moving things forward.” She is undaunted by the fact that her work is widely copied. “I always tell the team not to worry about it,” she says, “because by the time someone has finished copying something, we are already on to the next thing and a whole new design.”