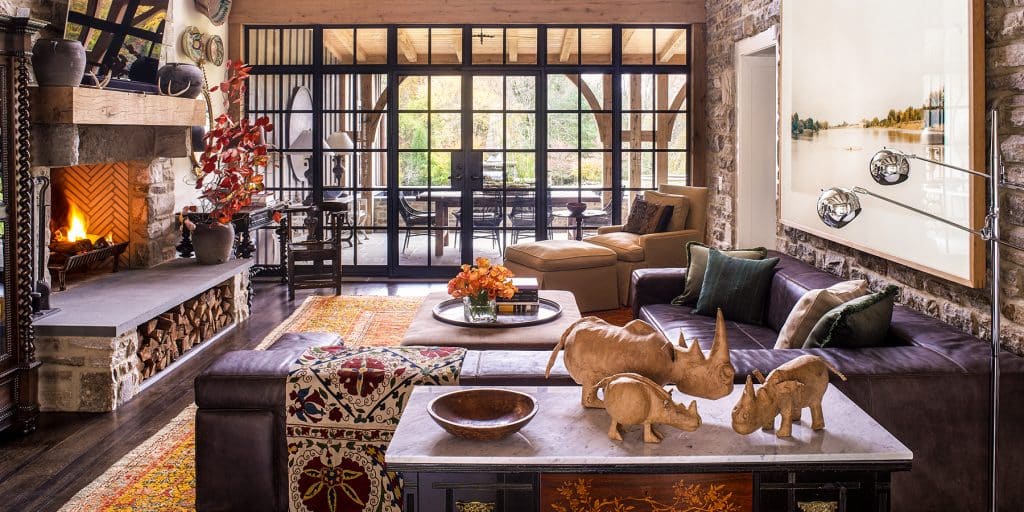 In her latest book, the designer reflects on the many cultures — Middle Eastern, African, European and American — that inform her warm, intuitive style. 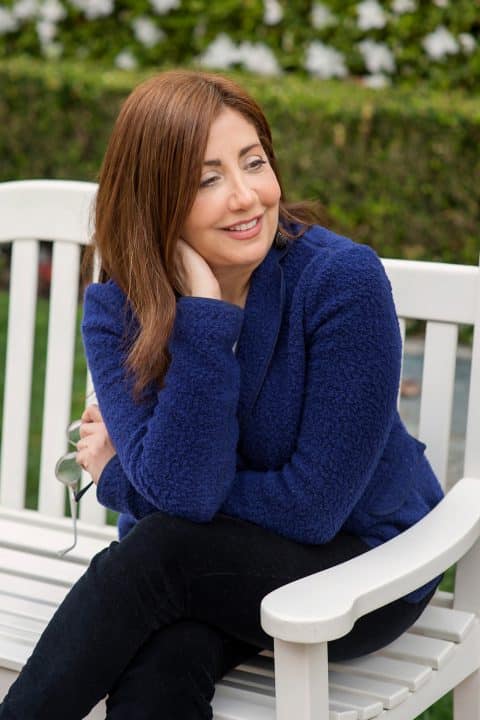 July 21, 2019Influenced by her childhood in Lebanon, Mona Hajj takes an organic, layered approach to design, favoring a collected aesthetic over formulaic interiors (portrait courtesy of Mona Hajj Interiors). Top: The living room of this Baltimore County, Maryland, home features an Elger Esser photograph above the sofa, which has a suzani draped over its back. On the floor is a ca. 1900 Turkish Ushak rug. Photo by Pieter Estersohn

Designers often talk about creating a “collected” look. When clients don’t have heirlooms and collections of their own — especially if those clients are young, just developing their tastes and starting to assemble possessions accordingly — this layered and personal aesthetic must be manufactured out of whole cloth. This type of interior, even when deftly executed, can sometimes convey a lack of depth; when conjured by unskilled hands, it feels contrived.

Neither is true for Baltimore-based designer Mona Hajj’s projects. That’s because the collected aesthetic comes naturally to her. In A Romance of East and West (Monacelli), her recently released second book, she talks about the homes in which she grew up during her Beirut childhood. “Many of the pieces we lived with had been handed down through generations,” she writes. “There were no formulas for the ways these rooms came together, which may explain why I am so averse to any sort of design formula now.” 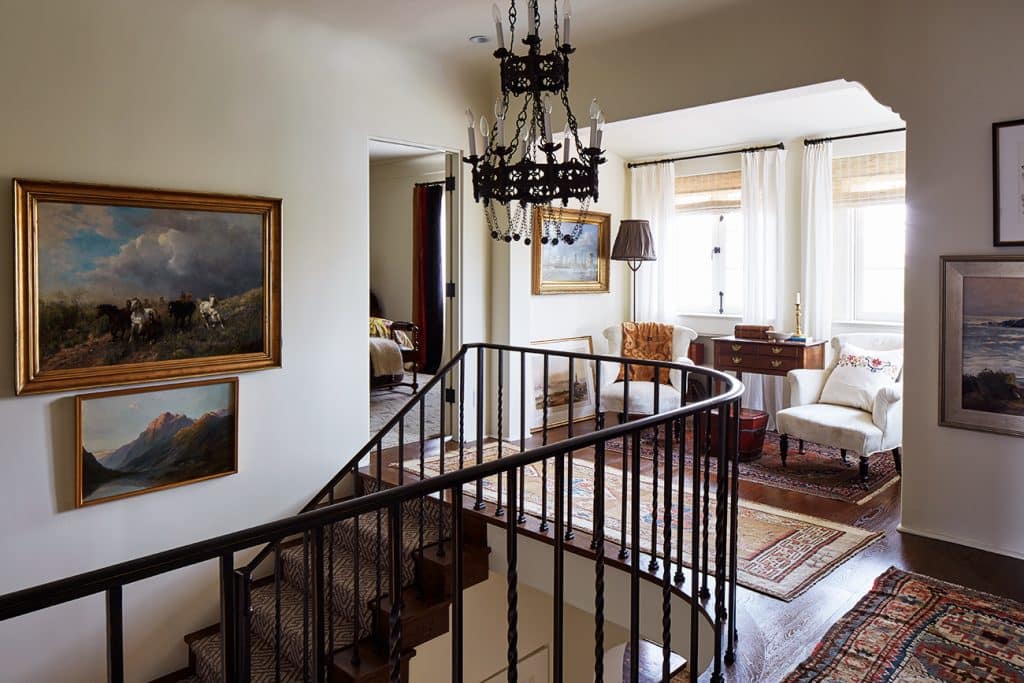 A seating area Hajj created on the second-floor landing of a Los Angeles home is anchored by a 19th-century Bakshaish rug from northern Persia. The chandelier is 19th-century French. Photo by Roger Davies

When asked to elaborate, Hajj explains, “Once we install the basic pieces, the rest of the room comes together naturally. It’s never set. It builds up. I can’t make up my mind ahead of time.” She cites the use of rugs: “In the Middle East, we layer them. Here, you put down a rug that suits the room exactly. If we love a rug, we just use it. If it’s too small, we layer another one alongside it. It just feels more comfortable that way.” Her process is so organic and spontaneous that a room can never not look collected. In a Beverly Hills home, for example, the living room floor features a patchwork of overlapping carpets, while on the second-floor landing, three rugs apparently unrelated in color scheme, country of origin and pattern share a relatively narrow space. Not only does all this work, but it feels as natural and easy as it is sophisticated. 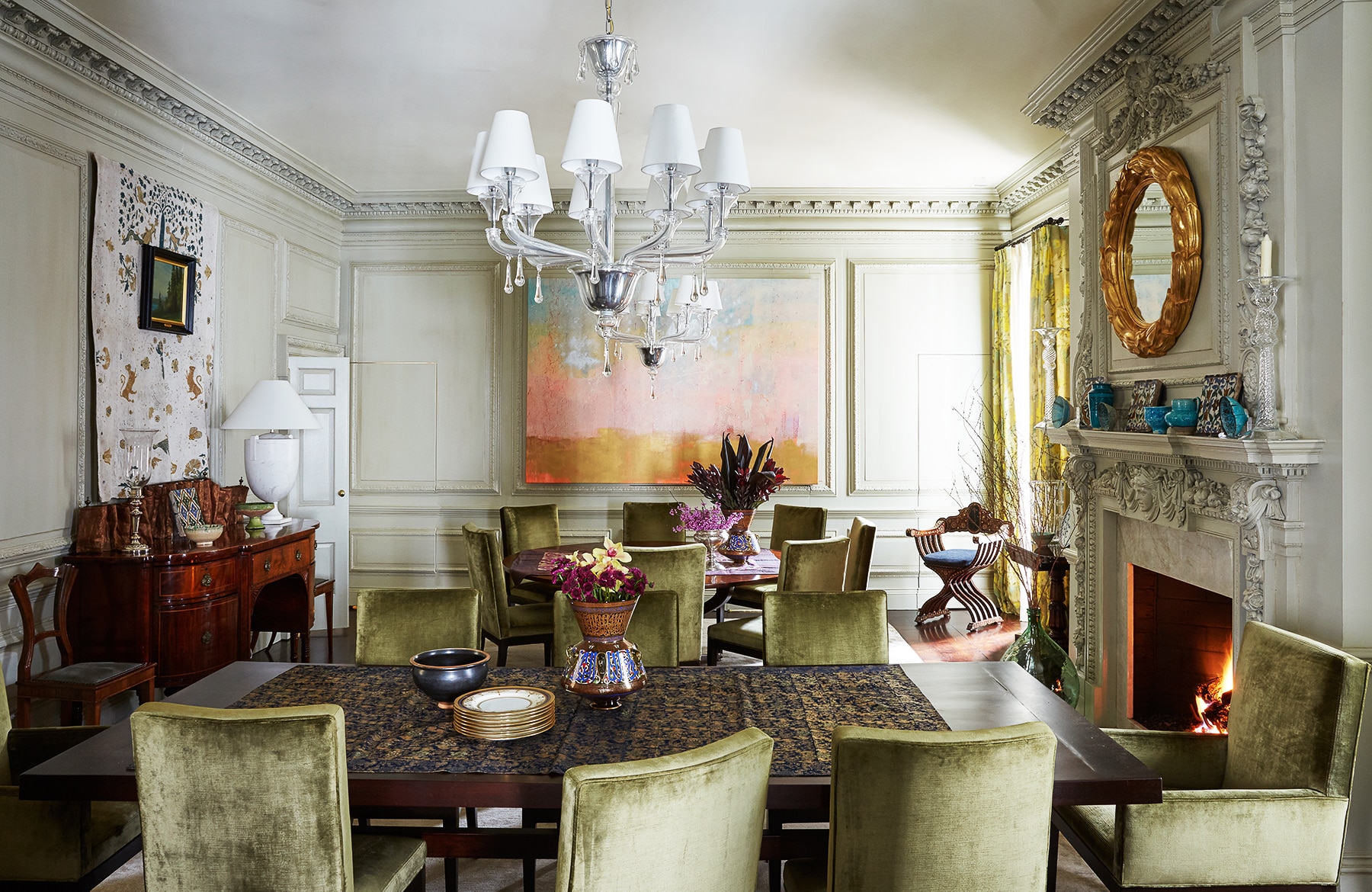 This spacious Washington, D.C., dining room contains two dining tables, which Hajj surrounded with streamlined chairs. A collection of Persian pottery from the 11th and 13th centuries is displayed on the mantel. Photo by William Abranowicz

Although born in Africa, Hajj was raised in Lebanon. Her parents “were in the import and export of textiles,” she says. “So at a young age, I was introduced to Eastern and European textiles. That part of the Middle East has a lot of rich culture. It was very natural for someone who loved art and design to appreciate Ottoman, Syrian and other textiles.” Not surprisingly, her eventual career was never in question. “I loved to design, loved to draw,” Hajj recalls. “It wasn’t like a choice. I knew that’s what I wanted to do.” 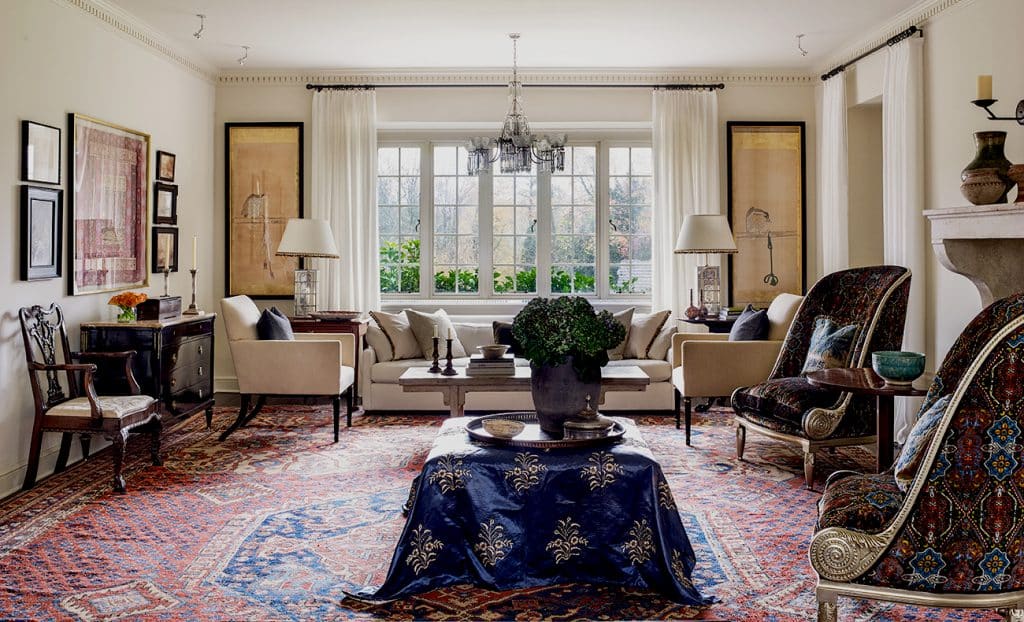 A 17th-century Ushak rug sets the tone in the living room of an early-20th-century Baltimore home. Hajj covered the table in the center of the space with a ca. 1880 European silk that she acquired while traveling. Photo by William Abranowicz 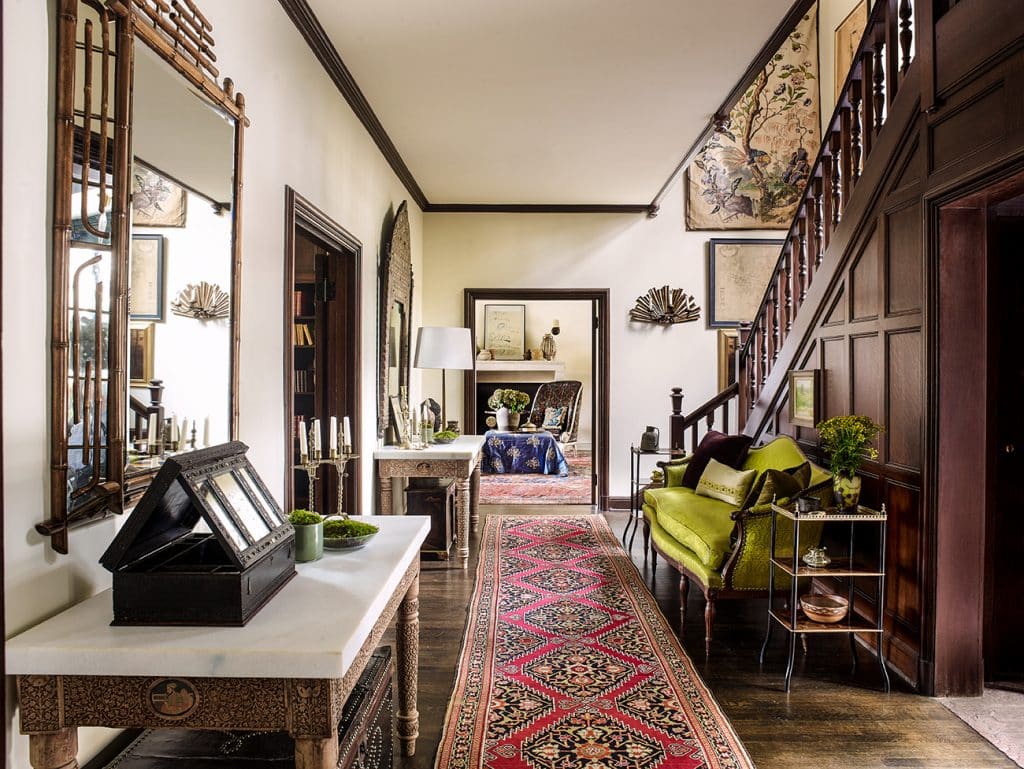 In the same home, the entryway features a Karabagh runner from the Caucasus and a pair of Anglo-Indian console tables. Photo by Pieter Estersohn 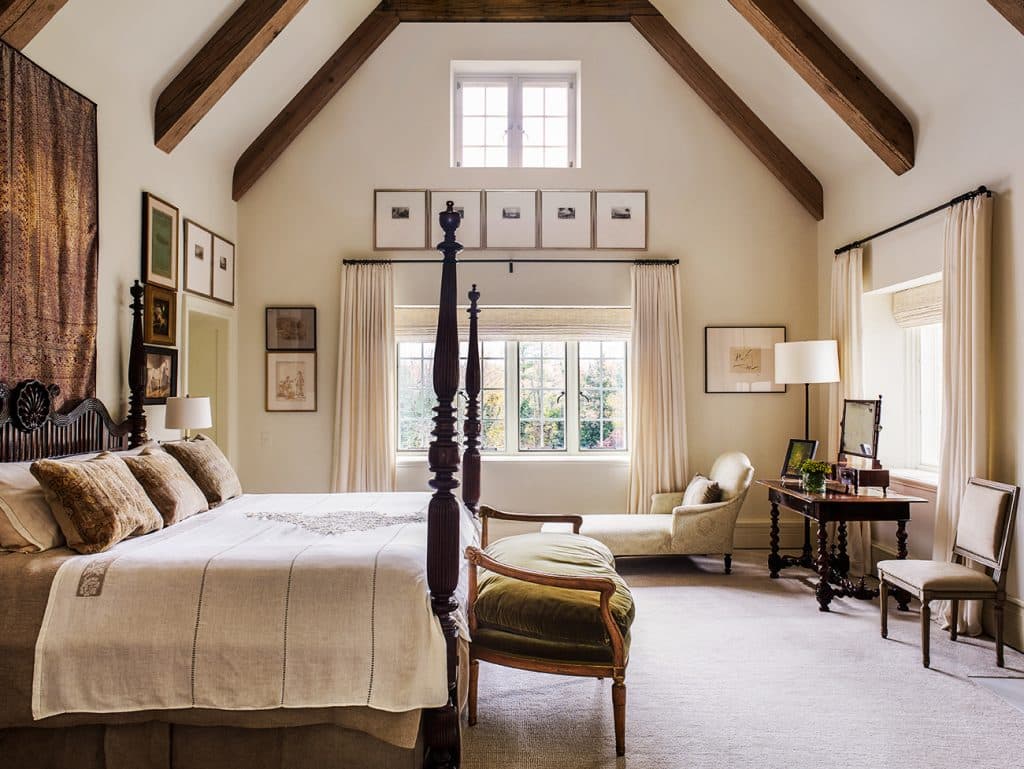 The ceiling was raised to create an airy retreat in the master bedroom, which includes a late-19th-century Napoléon III chaise and a late-18th-century European library table. Photo by Pieter Estersohn 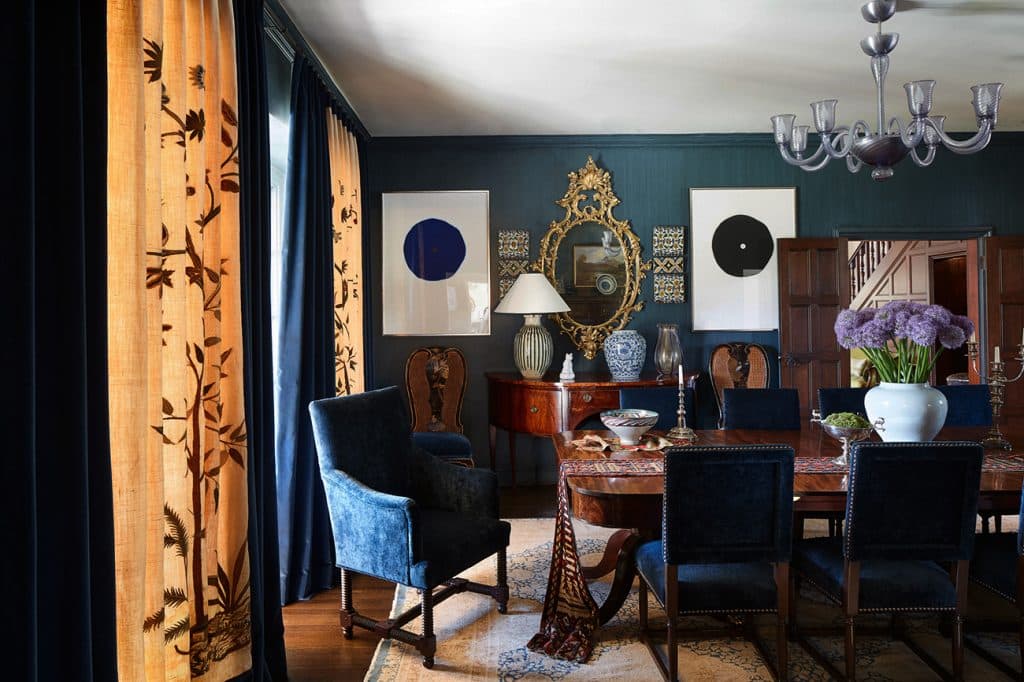 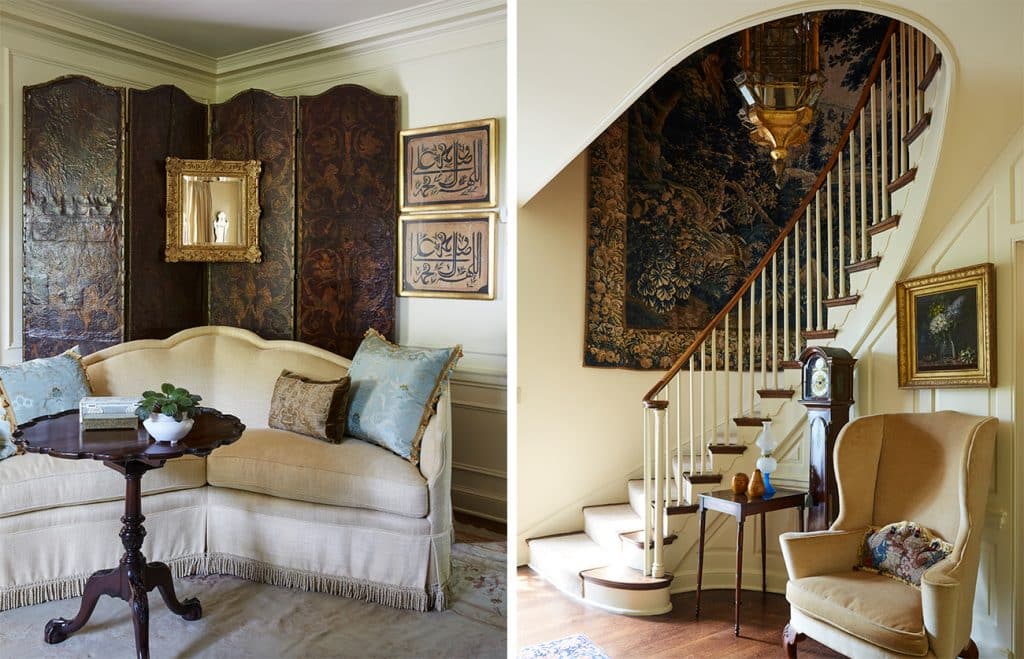 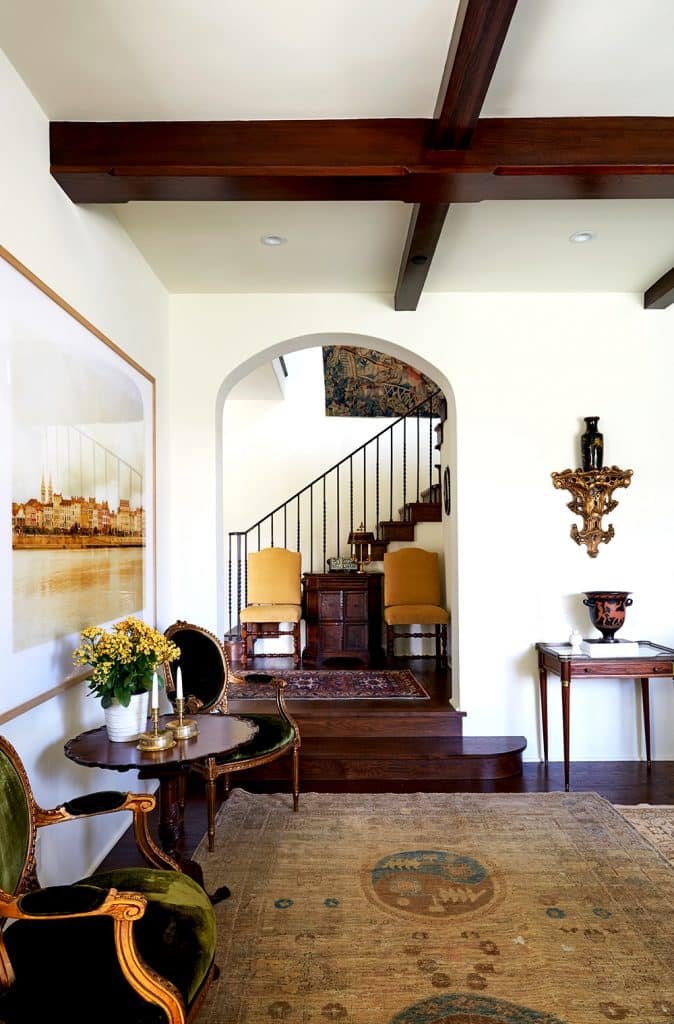 Hajj’s family immigrated to the United States when she was a child, settling in Maryland, where she went to school in the late ’70s. She attended the Maryland Institute College of Arts, earning a bachelor’s degree in interior design. After graduating, in 1987, she worked first at an architectural firm for three years, then at an interior design outfit. In 1988, Hajj entered an area interior design competition and won the first of four consecutive annual awards for best Baltimore designer. Local and regional magazine coverage raised her profile, enabling her to establish Mona Hajj Interiors in 1990. 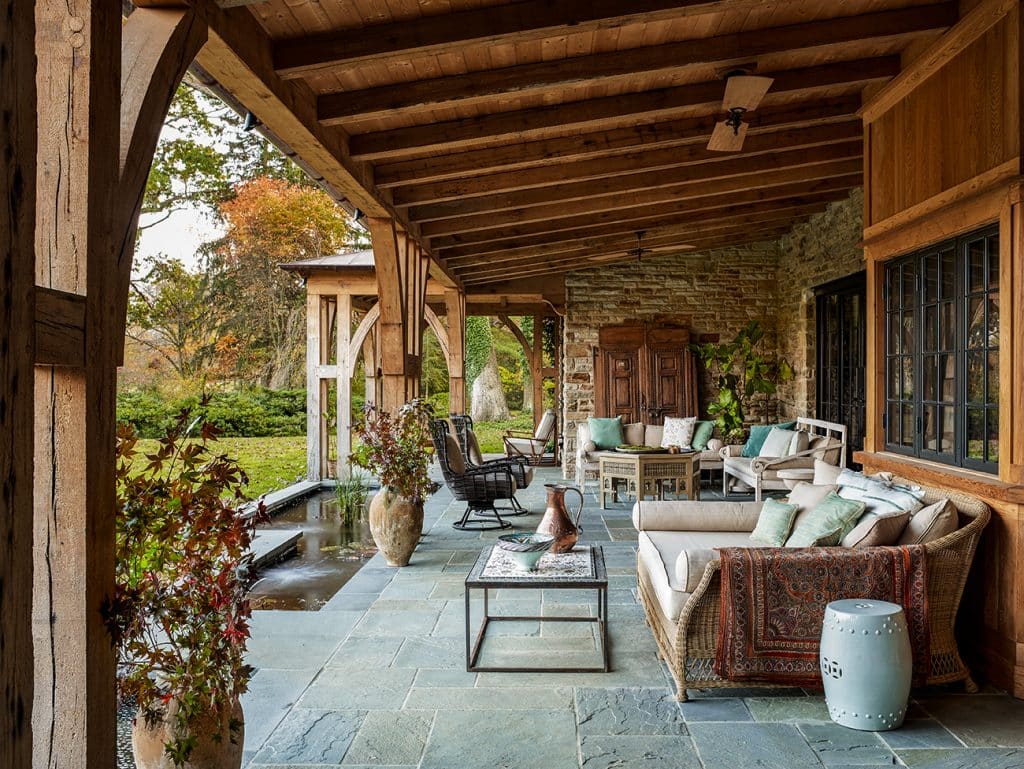 The porch of a Baltimore home features a deep wicker sofa and a Mediterranean painted table by Robert Kime. Hajj filled the 19th-century French terracotta jars with leafy branches. Photo by Pieter Estersohn

Hajj’s first big break was the complete renovation of Charlcote House, a 10,000-square-foot circa 1914 John Russell Pope home in Baltimore. “The clients were a young couple, and they wanted a young designer,” Hajj recalls. Her approach to the rooms was “not too traditional, not too modern,” she says. “They travel a lot and wanted to have that feel, not like other John Russell Pope houses filled with traditional furniture. It’s global, very collected and still one of my favorites.” A 2003 issue of the now-shuttered Southern Accents magazine splashed Charlcote across its pages. 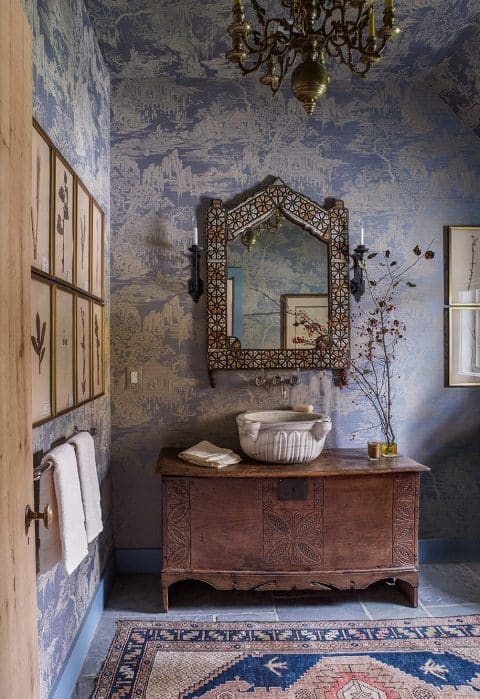 Hajj crafted the vanity in the Baltimore home’s powder room from a Turkish marble basin and an 18th-century American chest, reflecting the client’s love of travel. Photo by Pieter Estersohn

Five years later, Hajj interiors began appearing in Architectural Digest — but only after a show of chutzpah on the part of the designer, who, tired of waiting, pulled a project from the magazine’s powerful editor, Paige Rense, to give it to another magazine. “She figured out that I’m not very patient,” says Hajj, giving a mischievous laugh. With a hefty portfolio under her belt, she released her first monograph, Interior Visions (Monacelli), in 2011.

Traditional looks are back in vogue, and Hajj, who espouses an updated classicism, is busier than ever, working on up to six major commissions at a time, along with updates and smaller renovations for her regular clientele. Her warm palettes and sumptuous brand of globalism, however, distinguish her design as unique. “Classic style never went out for me,” she says. “It’s the base. There was a lot of care and thought given to classical interiors and architecture. I come from a culture where you can see mosaics that are five thousand years old.” 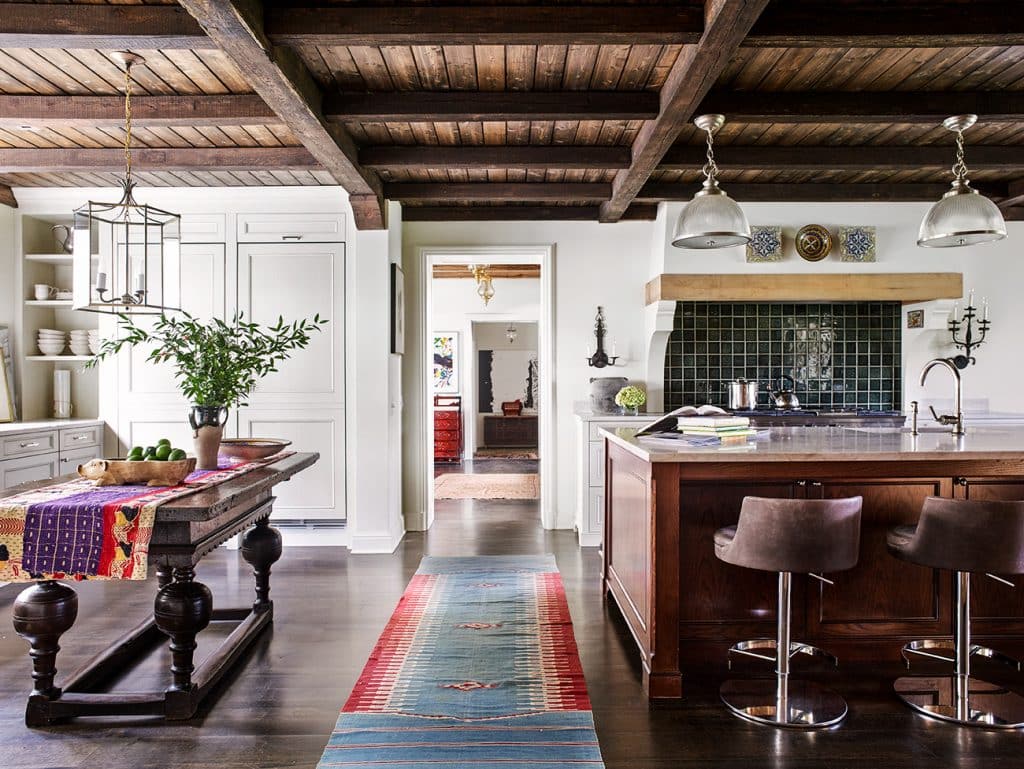 A mid-century lantern hangs over a late-17th-century Dutch table in the Baltimore kitchen. The rug is early-20th-century Lebanese. Photo by Pieter Estersohn

For Hajj, everything starts with rugs, particularly Persians — Mohtesham Kashans, Serapis, Haji Jalilis — although she has always been enamored of Moroccan Tuaregs. From there, “I might choose accent chairs that are old or antique, but furniture is mostly very clean, upholstered comfort,” she explains. “Sofas are kind of a nonevent.” As a woman with no formulas, Hajj hastens to add, “We will use a Vladimir Kagan sofa because it’s needed, not because it’s a recognized name. They’re very beautiful but also practical — you can have a lot of people sitting and conversing with each other because of the curves.” 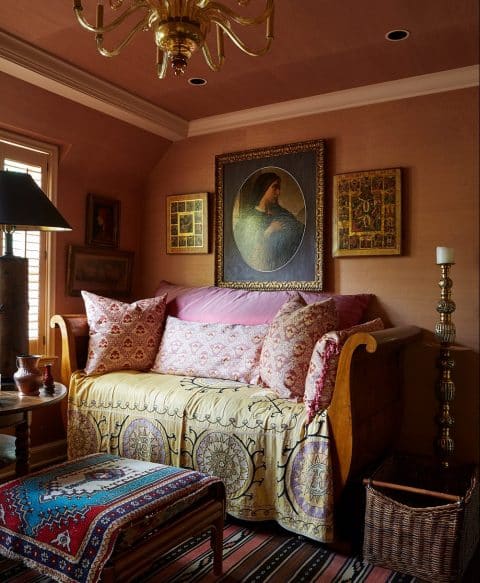 In this Chevy Chase, Maryland, guest room, a 19th-century suzani is draped over a ca. 1860 sleigh bed. The ottoman is topped by an antique Turkish prayer rug. Photo by William Abranowicz

Fundamentally, however, Hajj states, “I like the art and textiles to be the story rather than let the furniture take all the attention.” She herself loves Eastern textiles, like the souzanis that make frequent appearances in her interiors: on the bed of a Kentucky horse farm’s master suite, dressing up the leather sectional of a rustic stone home in Baltimore County. Asian and European fabrics draped on furniture — over tables in a Georgetown historic home and a Chevy Chase residence — are another of her signatures.

Which is not to say that Hajj cannot pare down. A seaside house in Bethany Beach, Delaware, is light, mostly monochromatic and visually simple. “I can be minimalist if needed,” she says. “But I need life everywhere. Layering feels more real. You travel, you accumulate — that’s how people really live.” 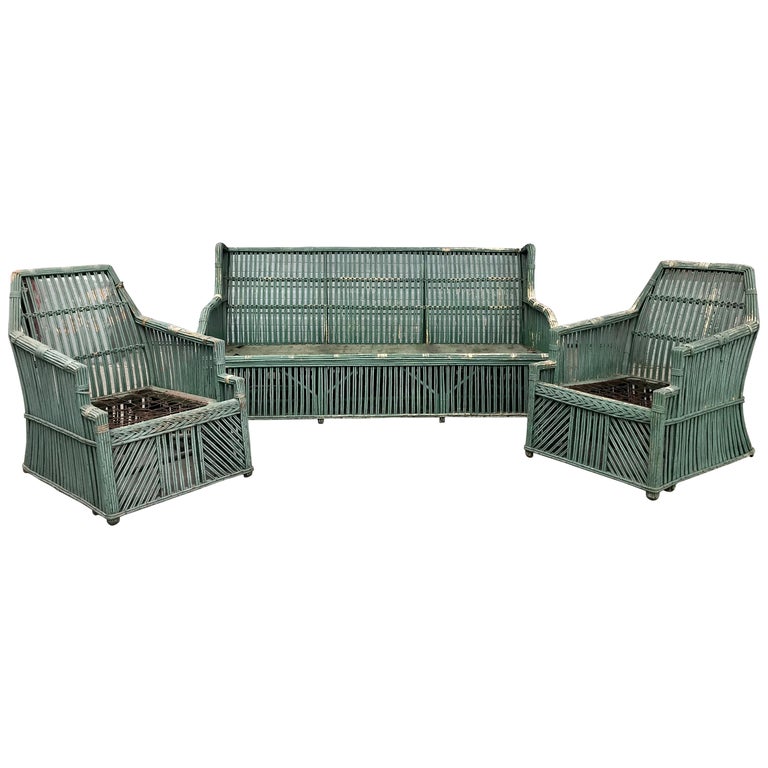 “This lovely Art Deco sofa and matching chairs have a welcoming feel, perfect for entertaining on a terrace of a modern or old home.” 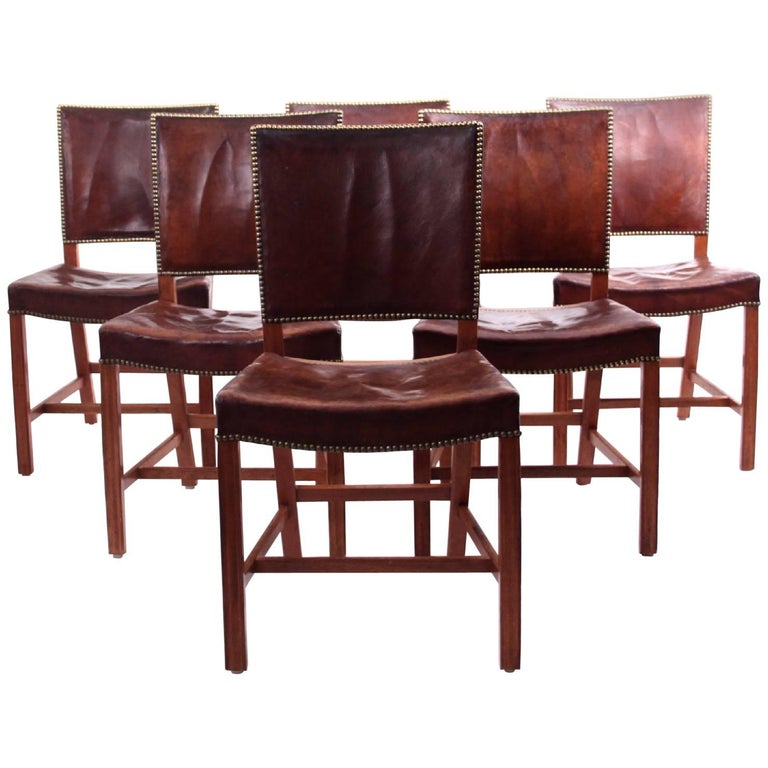 “These Danish mid-century chairs by Klint are a classic. The simplicity and clean lines are a favorite of mine.” 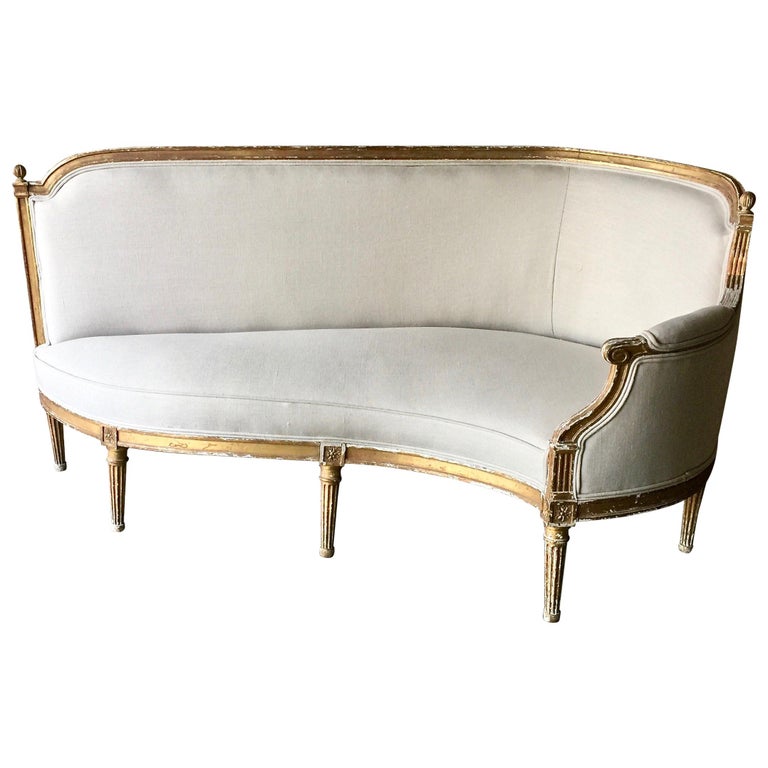 “A charming French canapé has a timeless look. I love to use them in living rooms, dressing rooms and bedrooms. The great scale is nice for both lounging and intimate seating.” 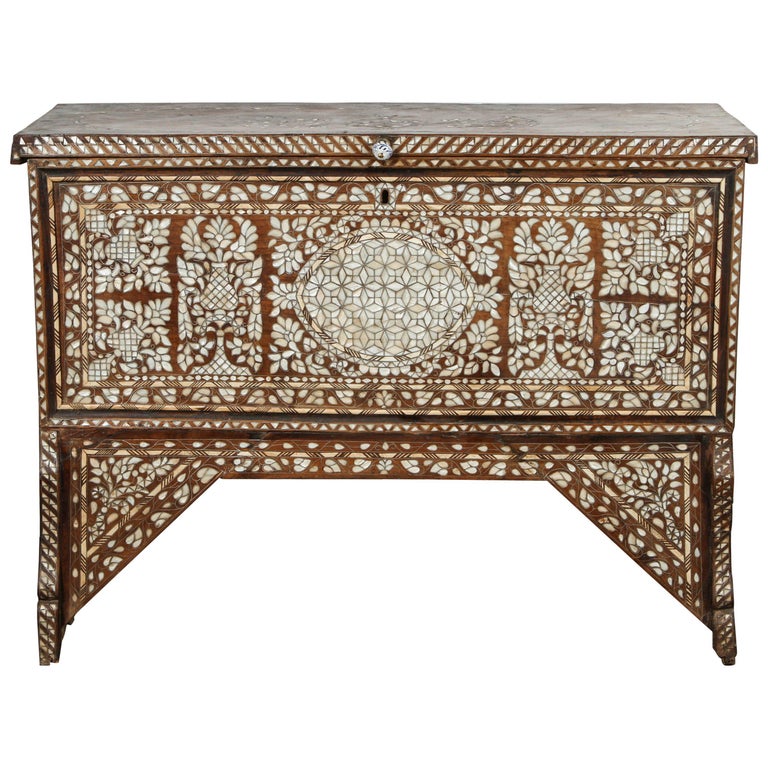 “The antique mother-of-pearl wedding trunk is another classic — always a welcome storage piece in different interiors.” 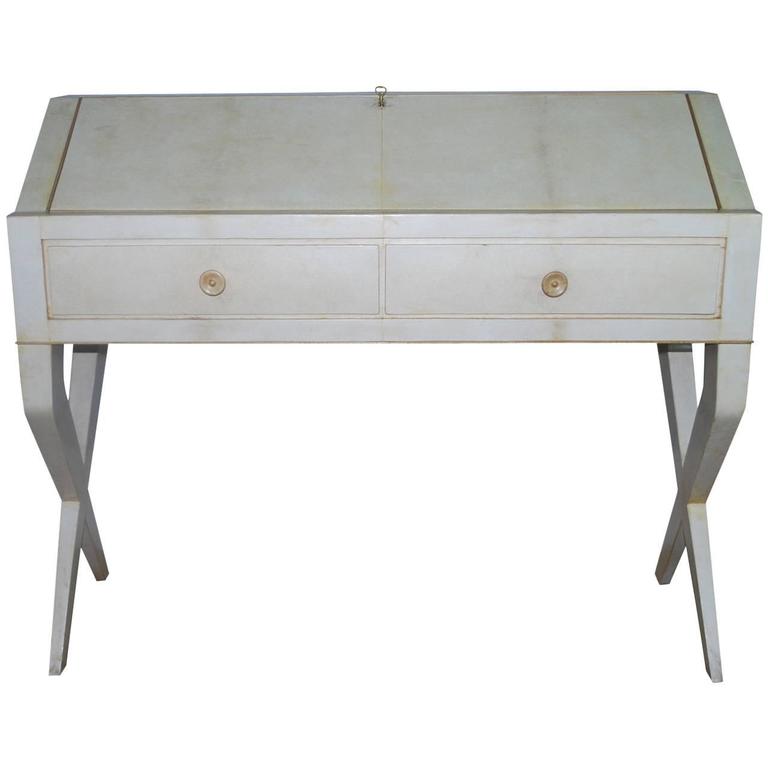 “I like the straightforwardness of this parchment desk — lovely and elegant in scale, with lines that are relevant to any period.” 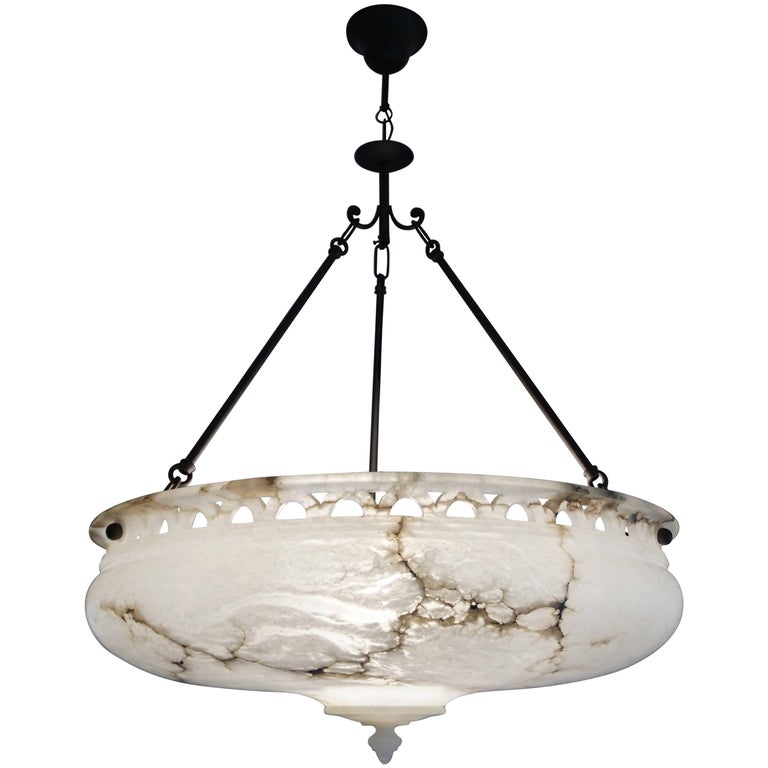 “This sumptuous and simple alabaster pendant, with its classical design, is a welcome addition in rooms of all styles.” 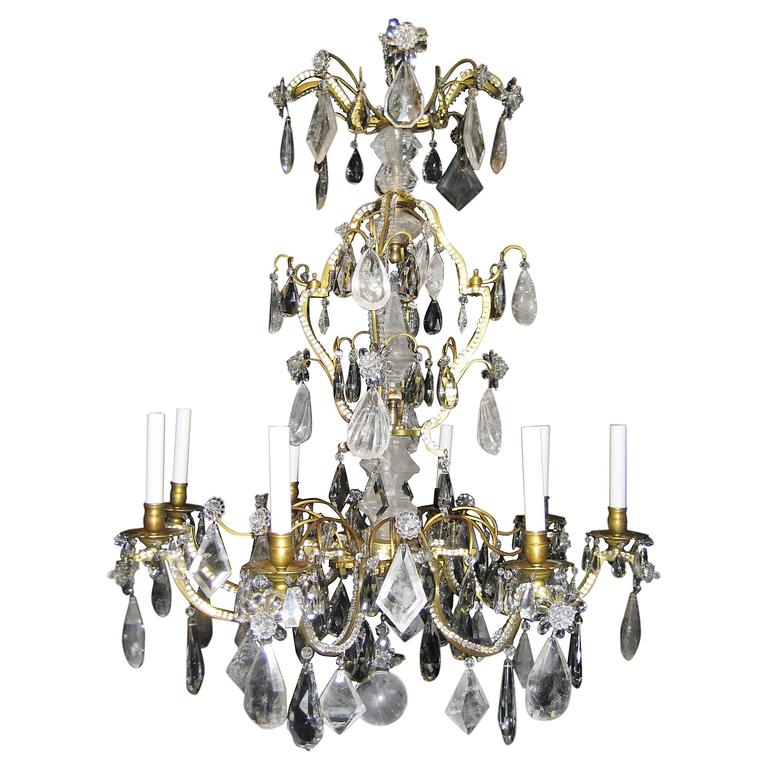 “An early Baguès chandelier displays a beautiful combination of decadence and restraint. This piece can make a whole room come together on its own, whether hung over a dining table or in a living room across from a fireplace.” 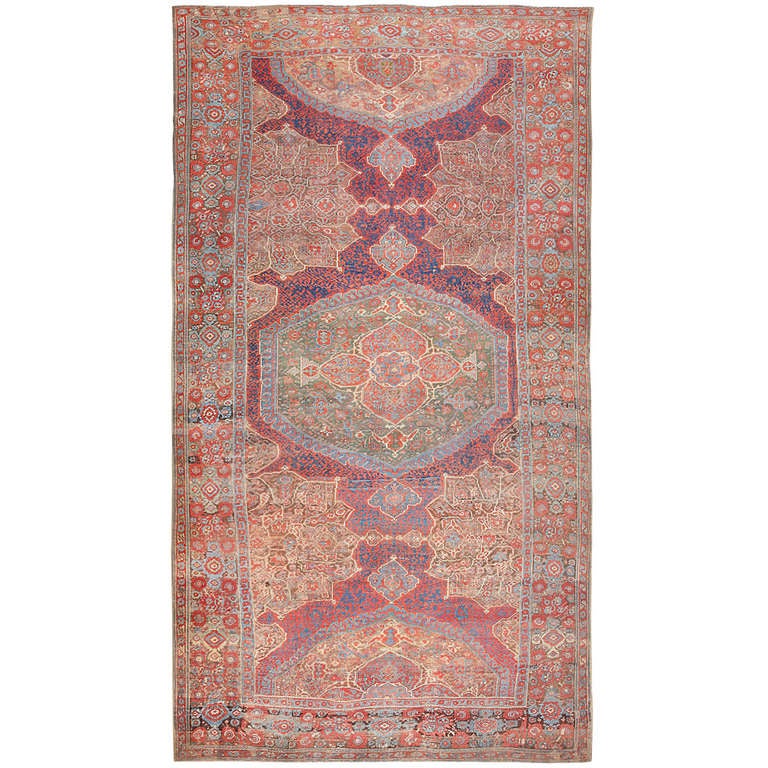 “One of my favorites: the glorious antique Oushak rug. These old rugs have heart, character, sadness, happiness, love, art and, above all, memories. Nothing can anchor a room like a beautiful old carpet.” 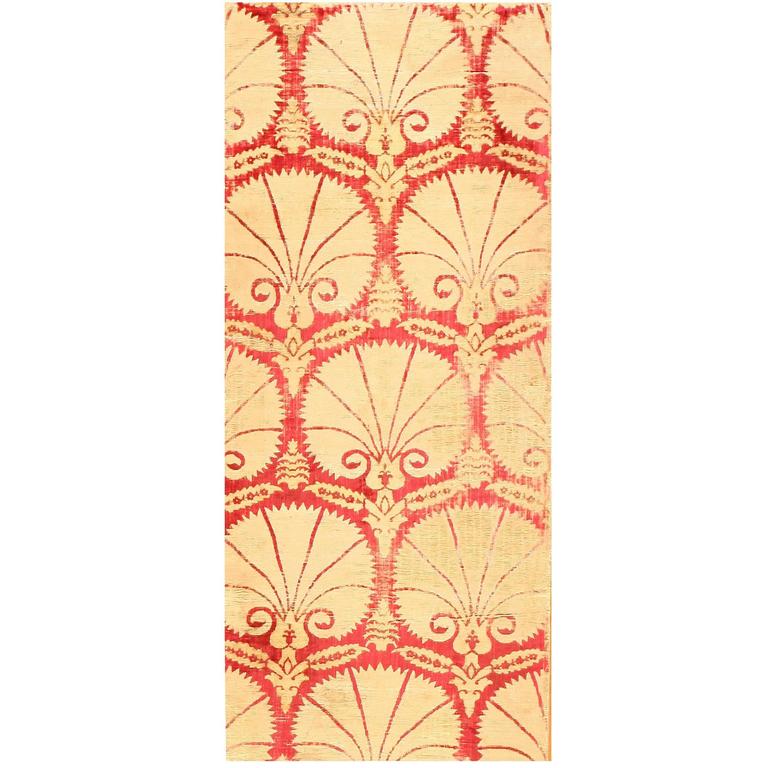 “The intricate yet simple design from the seventeenth century feels quite current. This beautiful antique Turkish textile would be most enjoyed framed and hung as an artwork.”