At Morentz, Furniture Restoration Is an Art 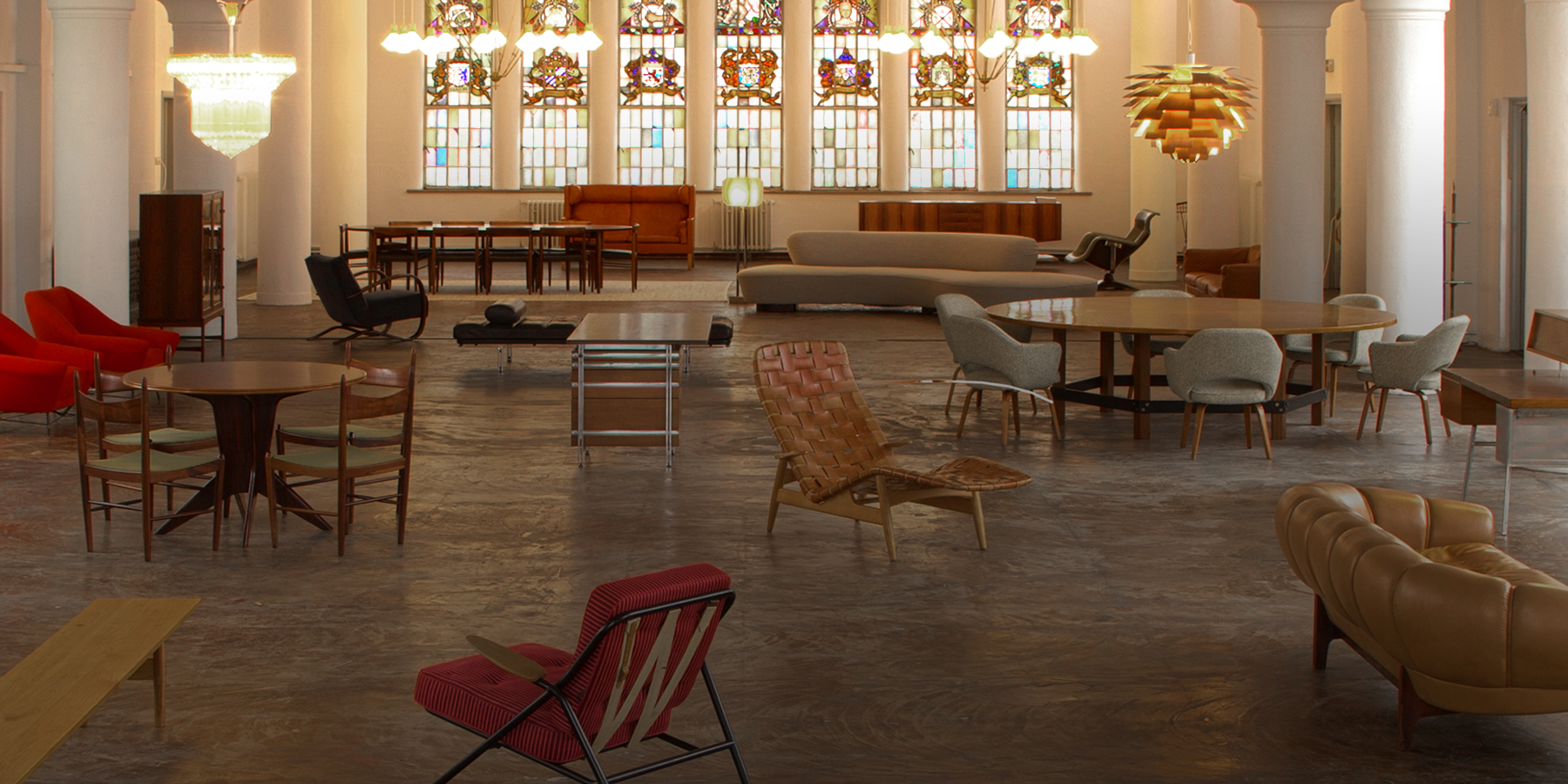 A striking former shoe factory serves as the capacious showroom, workshop and warehouse for this top Dutch dealer in vintage modern. 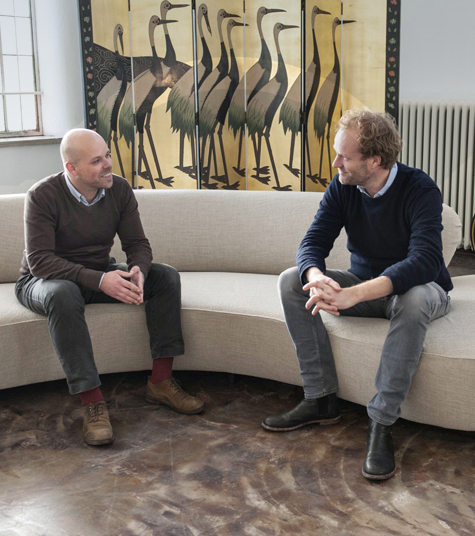 Amid the narrow streets and drab two-story brick houses of the small Dutch town of Waalwijk, a large interwar factory building with stained-glass windows stands out like some kind of modernist cathedral.

Inside, light filters through the Art Deco–era stained-glass, which depicts industrial workers at their machines rather than a religious scene or some traditional floral pattern. This warm light illuminates a set of cognac-colored leather and teak Elizabeth chairs by Danish designer Ib Kofod-Larsen, as well as their matching ottomans. These are situated near a curved, black-leather De Sede Non-Stop modular sofa that snakes through the room, arcing toward a pair of glass-bulb chandeliers that evoke suspended clusters of blown bubbles.

It’s a fitting site for the showroom of Morentz, one of the Netherlands’ top dealers in 20th-century furnishings, which are presented here after being restored and reupholstered according to the highest possible standards in the former shoe factory next door. This entry point, a 5,400-square-foot space that was once a worker’s canteen, is just the tippy top of the iceberg.

The bulk of Morentz’s stunning collection, in fact, is in the two buildings beside and to the rear. All told, the dealer has more than 100,000 square feet of showroom, warehouse and workshop space where a team of busy restorers turns mid-century furnishings into exquisitely re-crafted works of modern design.

The esteemed showroom’s collection comprises thousands of chairs, hundreds of dining and coffee tables, scores of sofas, teak and rosewood sideboards and lighting elements dating to around 1950 through the 1980s. Some items are in nearly perfect condition, but the vast majority will be refurbished or reupholstered by the expert furniture restorers on staff.

“Every week, I buy something very interesting, and I don’t know anything about it,” says Matthijs Hoveijn, the founder and owner of Morentz. “That makes me happy every week.”

Hoveijn grew up in Hengelo, in eastern Holland, where he studied business administration at university. While looking for a job after graduation, he collected furniture as a hobby, but soon realized he could deal in these pieces and those like them. “It was a job I could create myself,” he says. When his collection outgrew his home, Hoveijn started selling pieces out of a storage space in Amsterdam’s bohemian de Pijp neighborhood. In 2006, his business having expanded even further, he decided to rent part of a building in Waalwijk, a town about an hour’s drive south of Amsterdam. At the time, the building was still functioning as a Van Haren shoe factory, but the company was gradually relocating to another site. Hoveijn took over more and more space as Van Haren vacated it until he was eventually using the whole warehouse. 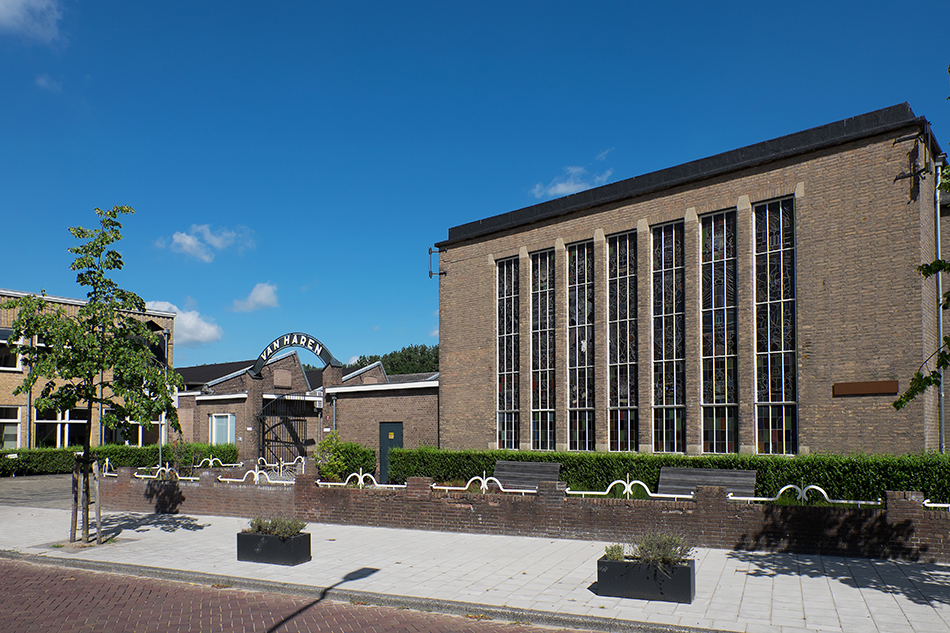 Morentz operates its showroom, workshop and warehouse out of a large former factory, built in the early 20th century, that features magnificent stained-glass windows whose scenes celebrate the industry of the factory worker. In the quiet little town of Waalwijk, dotted with two-story brick houses, the structure stands out like some kind of modernist cathedral. 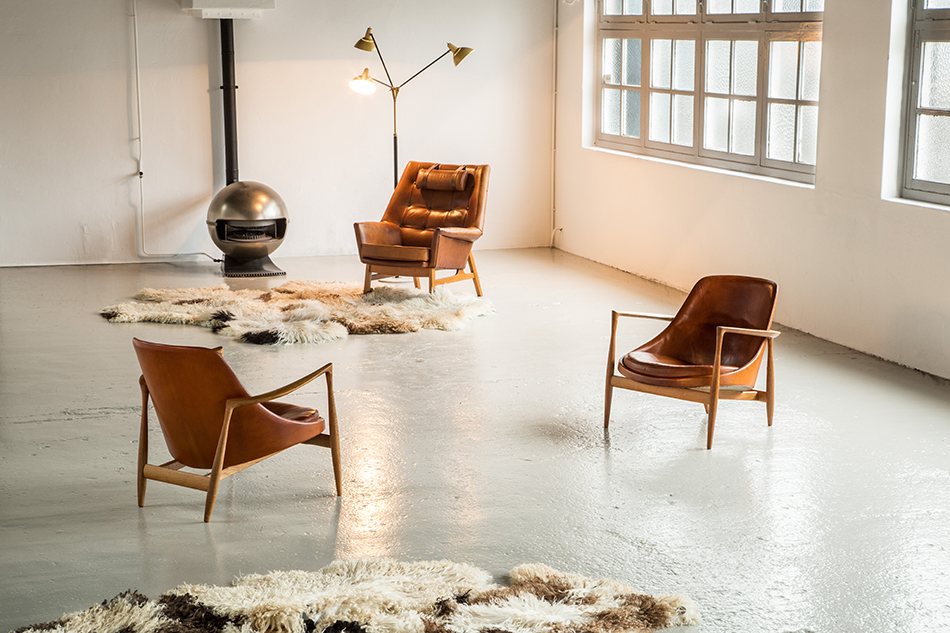 Beautifully restored vintage leathers are a Morentz specialty. A pair of Elizabeth chairs by Ib Kofod-Larsen in their original cognac leather (front) and a lounge chair by Tove and Edvard Kindt-Larsen (back) are just a few highlights from the dealer’s collection. 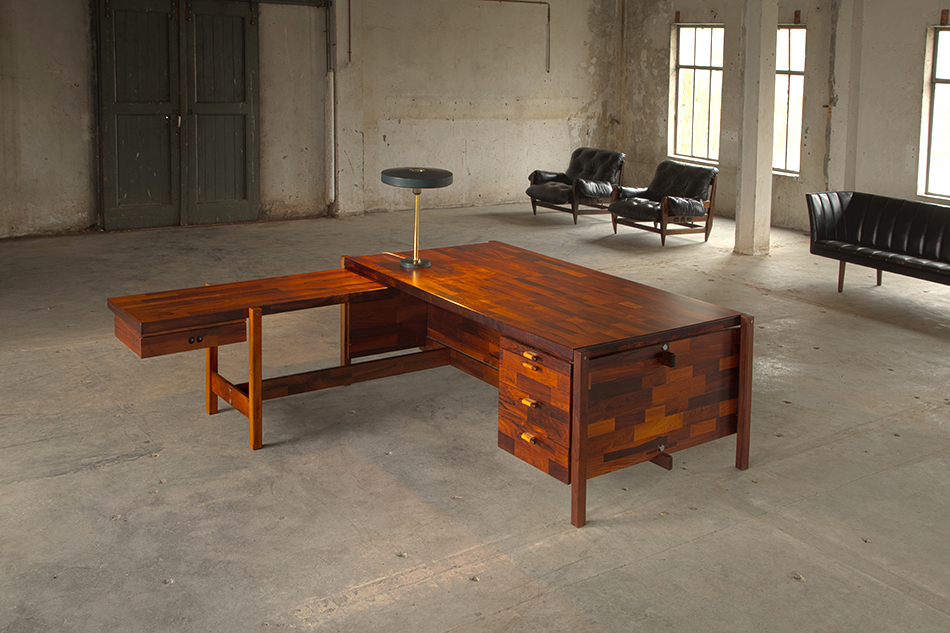 Morentz’s mid-century gems hail from all over the world, like this restored Brazilian rosewood desk designed in the 1960s by São Paulo’s Jorge Zalszupin. 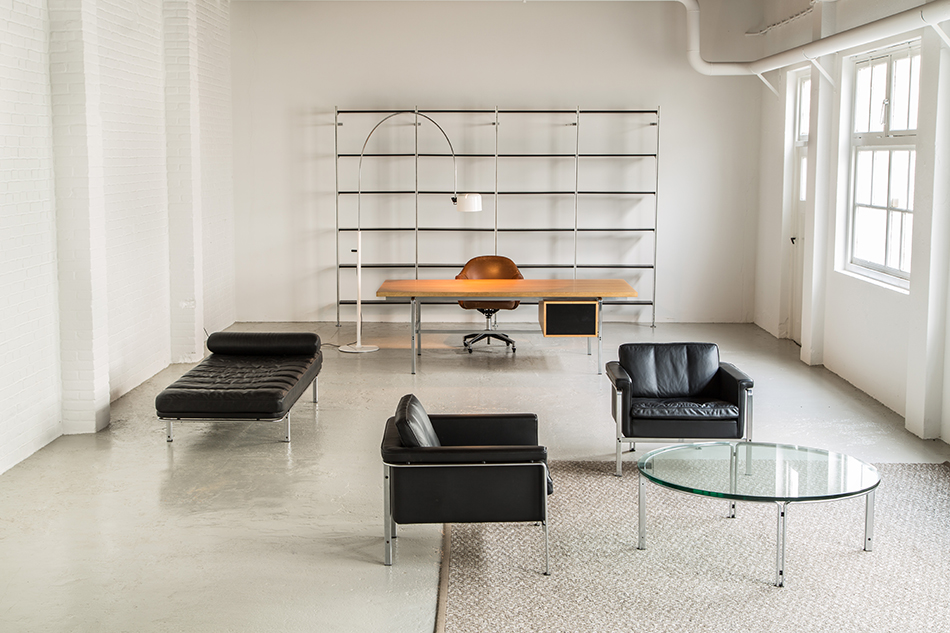 “Every week, I buy something very interesting, and I don’t know anything about it,” says Hoveijn. Morentz’s more than 100,000 square feet of space are filled with such fascinating finds as a Horst Brüning–designed daybed (far left), Joe Colombo for Oluce floor lamp (rear) and chrome cocktail table with original glass, also designed by Brüning. 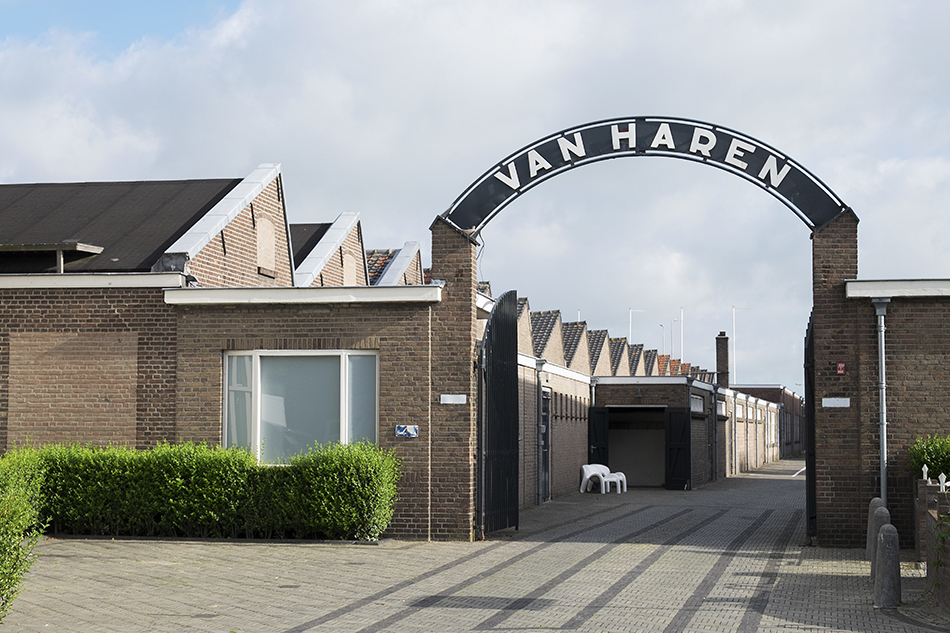 The Morentz complex is as architecturally striking as the furniture it showcases.

“In Dutch, we have the word verzorgd, which means ‘cared for’ — with fine craftsmanship. It suggests you keep the historic background of the piece.” 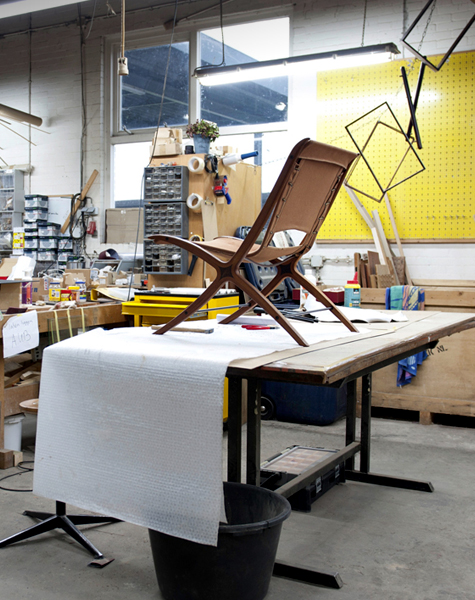 Hoveijn says that his restorers often reduce couches, chairs and divans to their foundational woodwork, replacing all the stuffing, padding and upholstery while maintaining the basic structure of the piece. Photo by Maria Cavali

Originally, Hoveijn called his business FabriekNL, but he  renamed it recently in honor of his target customers, the imaginary Mr. and Mrs. Morentz. He describes them as “an international couple who travel around the world and like beautiful things but are very selective.” And, he adds, “Mr. and Mrs. Morentz especially like to have a very good level of service.”

Some of Hoveijn’s mid-century finds, which he sources worldwide, are sold as-is with just minor refinishing or repair, while others “you have to go back down to the wood and start building it up again,” he says. “It requires very fine craftsmanship. When you start working on it, there’s a very thin line. Either the furniture is over that line or it’s still there.”

Restorers at Morentz often reduce couches, chairs and divans to their foundational woodwork, replacing all the stuffing, padding and springs, while maintaining the basic structure of the piece. “We believe that you can also make the furniture too new, and then you miss the touch of the old experience, the sophistication,” he says. “Of course, that depends on the piece. For Italian furniture from the nineteen fifties and sixties, they used a very thick lacquer, and if you take the lacquer off, you can’t get it back.”

Restoring vintage leathers is a Morentz specialty.  Ultimately, the amount of restoration  is determined by the tastes and desires of the client. Hoveijn’s own preference would usually be to leave some of the patina behind. “Eighty percent is like new, but twenty percent is old touch, something vintage,” he says. “We create a second life for the pieces.”

Restoration is a very fine art, he says, and one he takes very seriously. “In Dutch, we have the word verzorgd, which I think in English means ‘cared for’ — but with fine craftsmanship,” he explains. “It’s a word that suggests that you put a maximum of intention into it, and you keep the historic background of the piece. You don’t kill the soul of it.”

Matthijs Hoveijn shares his thoughts on a few choice pieces 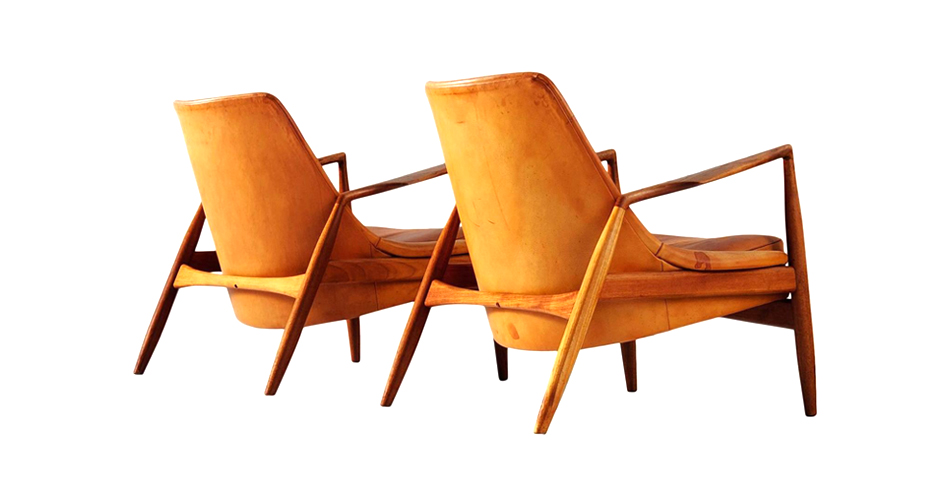 “This set of chairs has been one of my personal favorites since the day I first learned about mid-century design. I adore the shape, construction and, above all, the quality. This pair is particularly rare thanks to the extremely elegant patinated cognac leather and the still-perfect wood construction.” 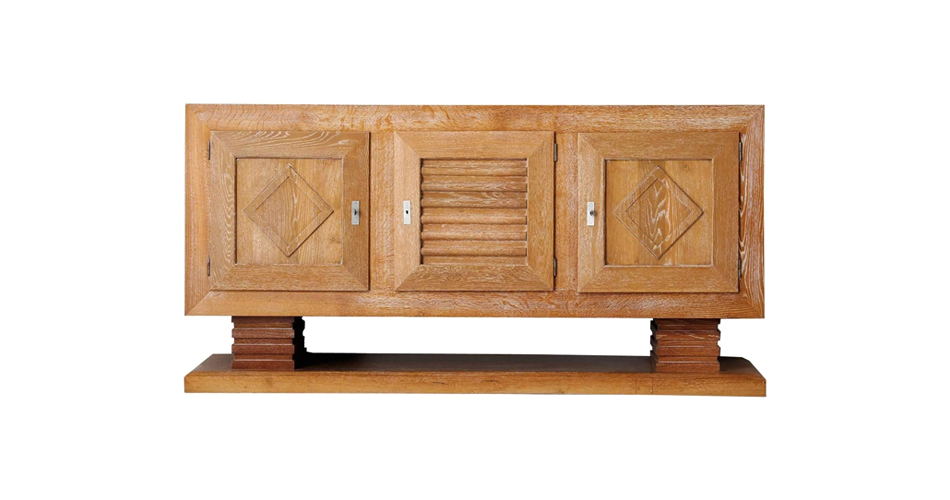 “During a family holiday spent in a house in the French countryside, I learned about French Art Deco and the designers of that era. I’ve had an interest in the period, style and its practitioners ever since, focusing on such decorators as Charles Dudouyt, who slowly added a more modern touch to his beautifully crafted furniture.” 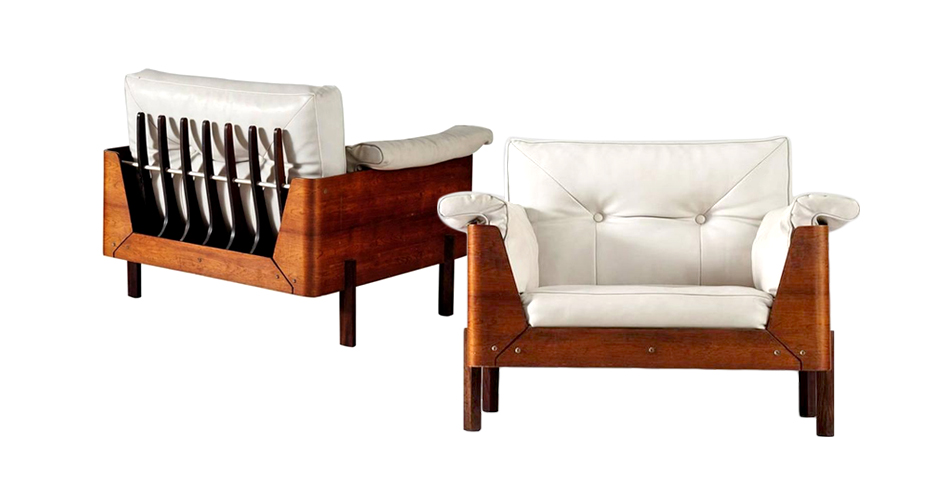 “In recent years, we’ve invested time and energy into building our South American collection with hard-to-find pieces. A prime example is this sofa and matching chairs by Zalszupin.” 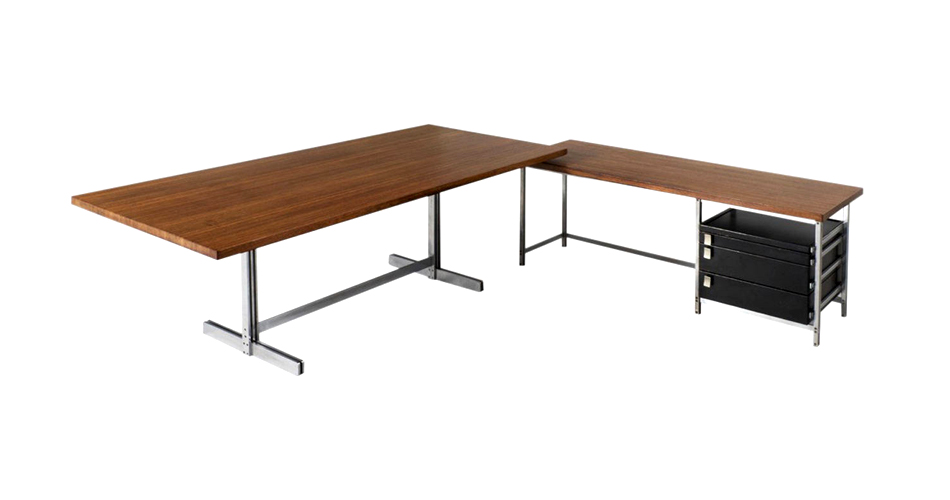 “This unique piece was a private commission for a Belgian physician who used it as a home desk for more then 53 years. We feel lucky to have acquired it. I am a big admirer of Wabbes, an important Belgian furniture designer and decorator.” 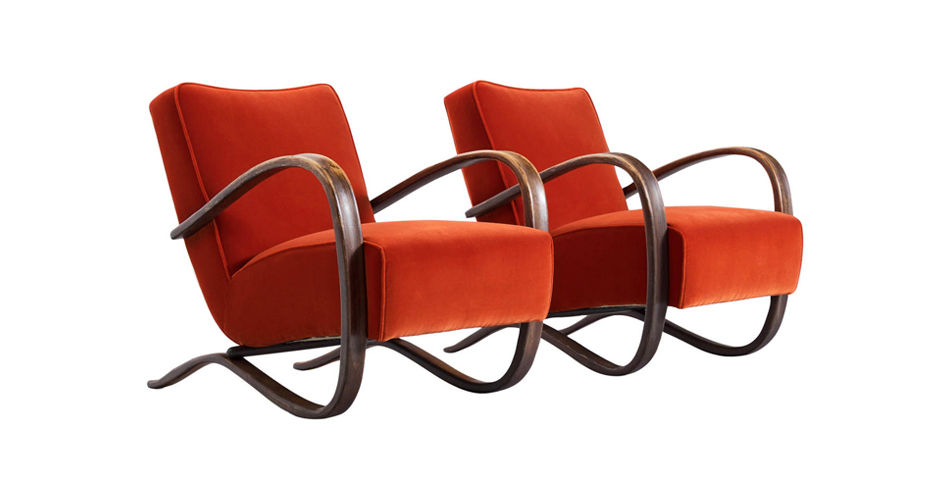 “I especially like these chairs as they represent a later Art Deco design that can, with the right fabric, feel just right in any kind of modern interior. We make vintage pieces feel timeless by reupholstering them in modern fabrics and colors and by rebuilding the seating interior with new copper springs and a combination of several different foam qualities. These chairs are now as comfortable as they are beautiful.” 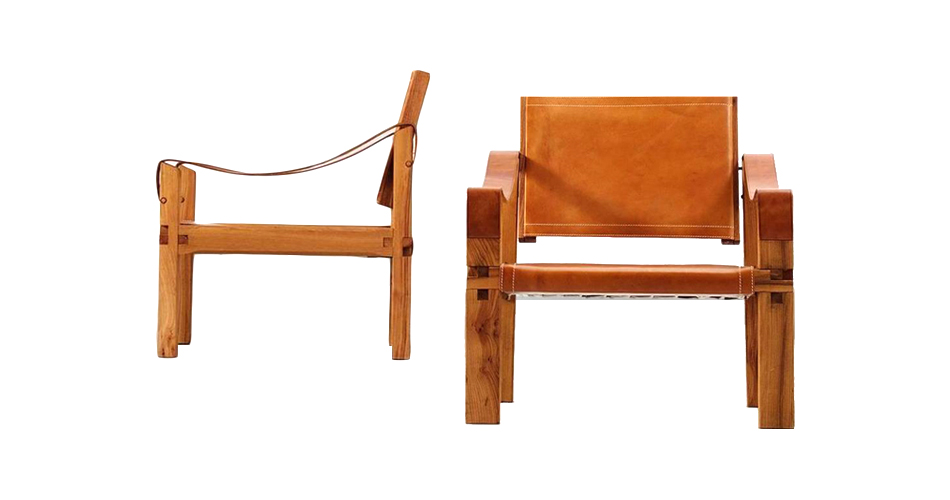 “For some time, we have been sourcing quality Chapo furniture from the French-Belgian border. So it was interesting to find this elmwood and cognac leather pair, which seems to have been barely used, in the northern reaches of Sweden, in a beautiful vacation home.”