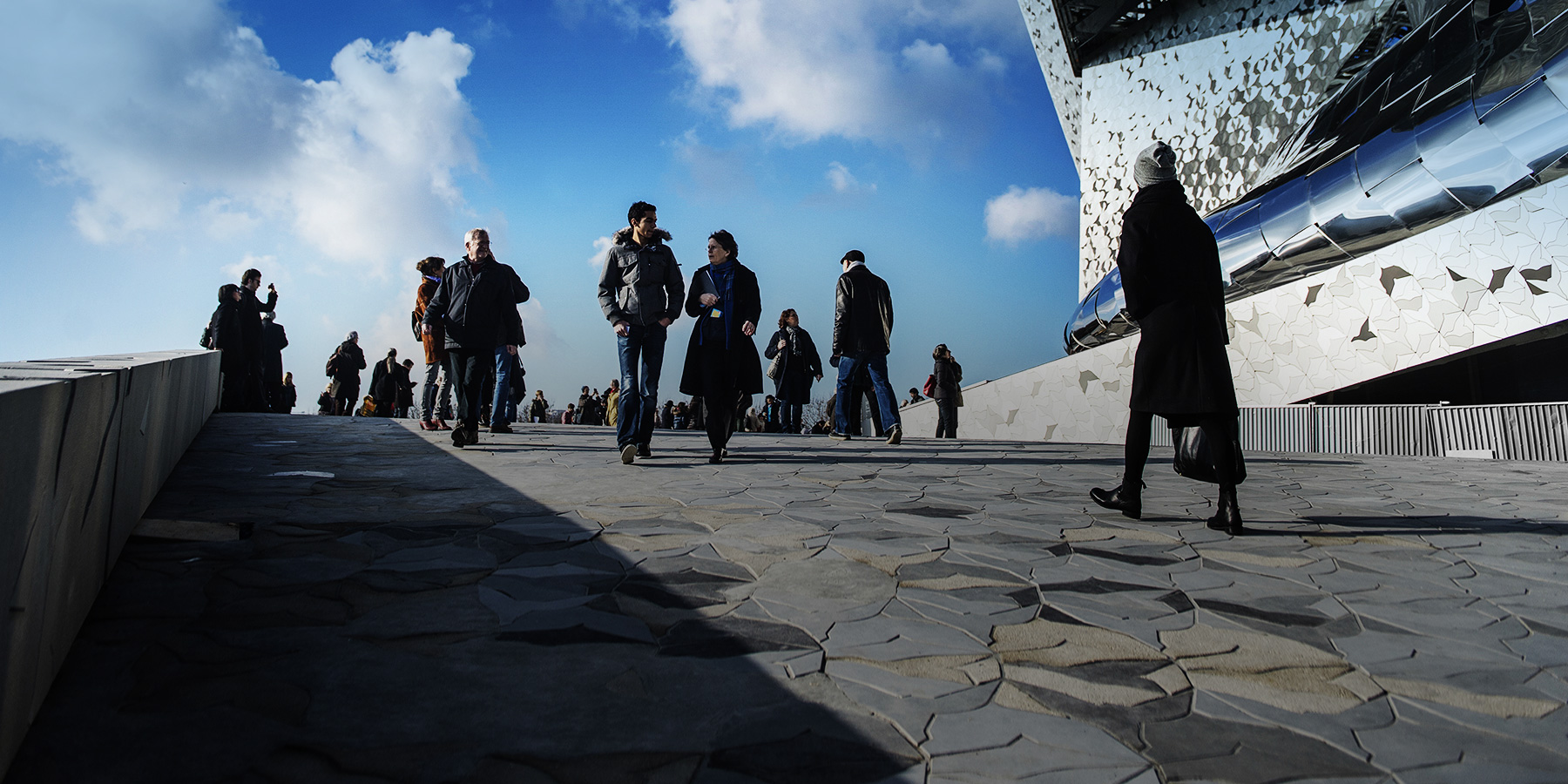 Paris in springtime: There’s no more wonderful place on earth. With the thaw comes the promise of fresh surprises across the city — because for all its historic charms, Paris is addicted to the new. For the art and design lovers flocking to PAD Paris later this week — or anyone planning a springtime jaunt — we’ve highlighted three instant landmarks that should not be missed. 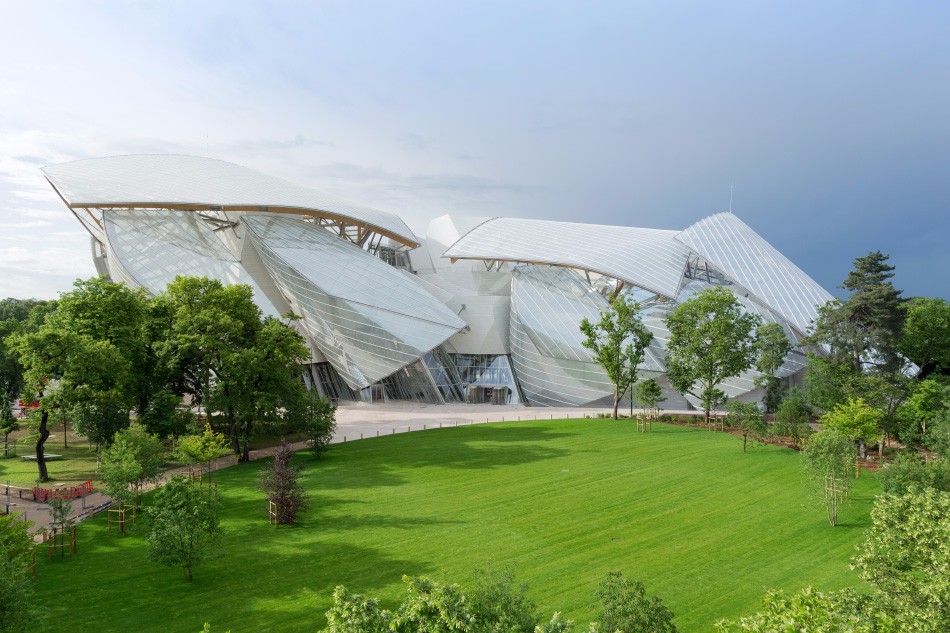 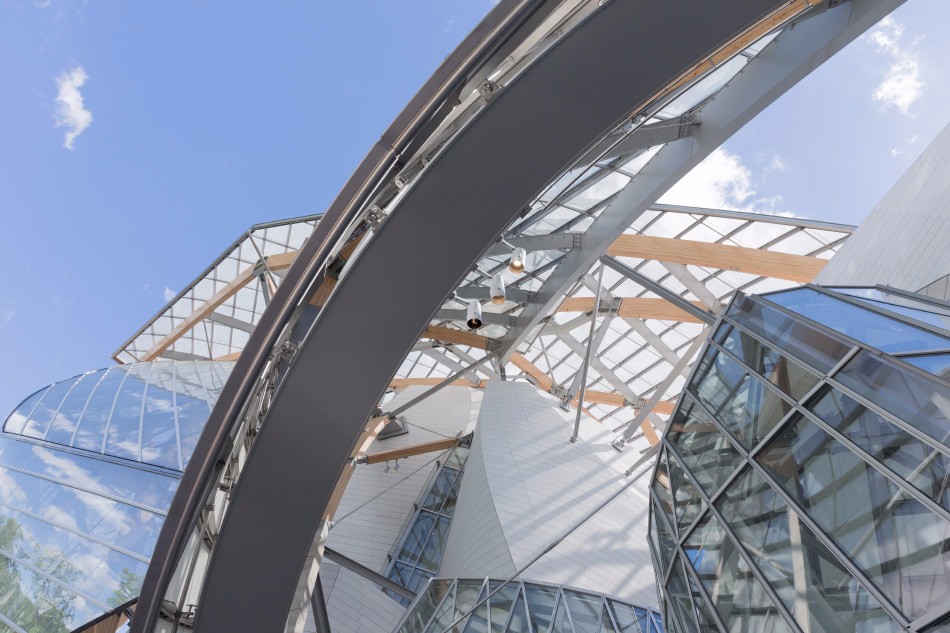 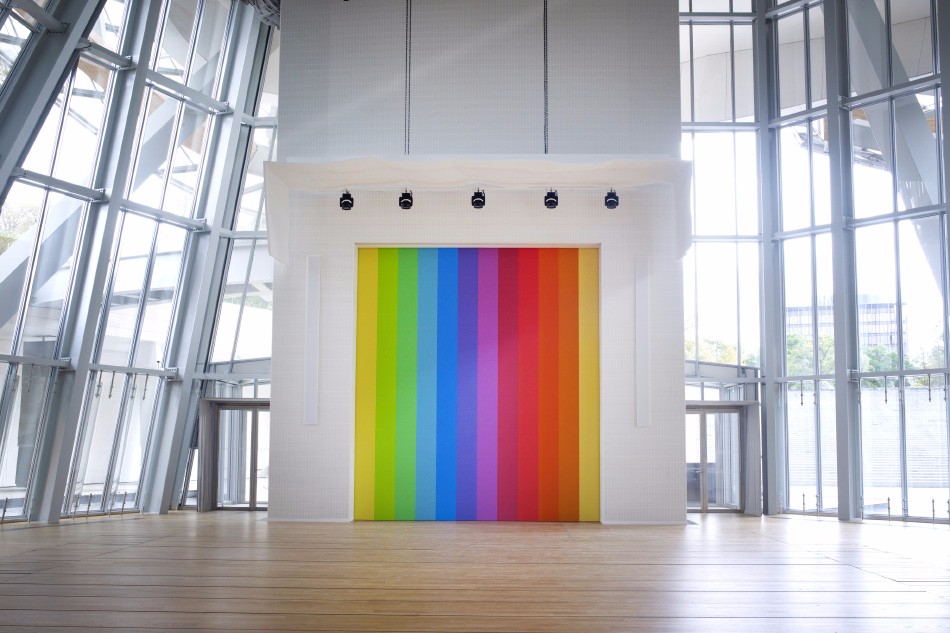 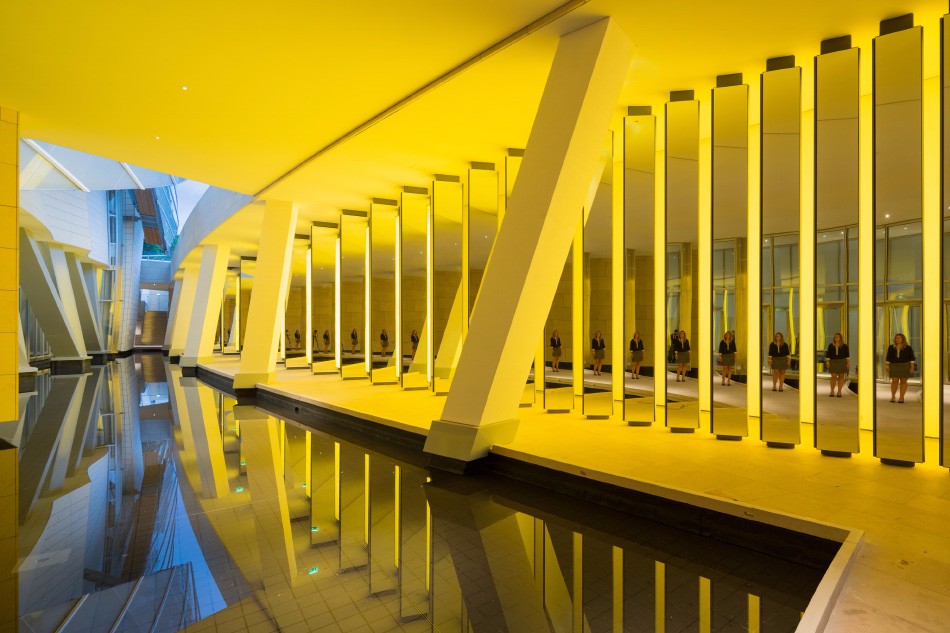 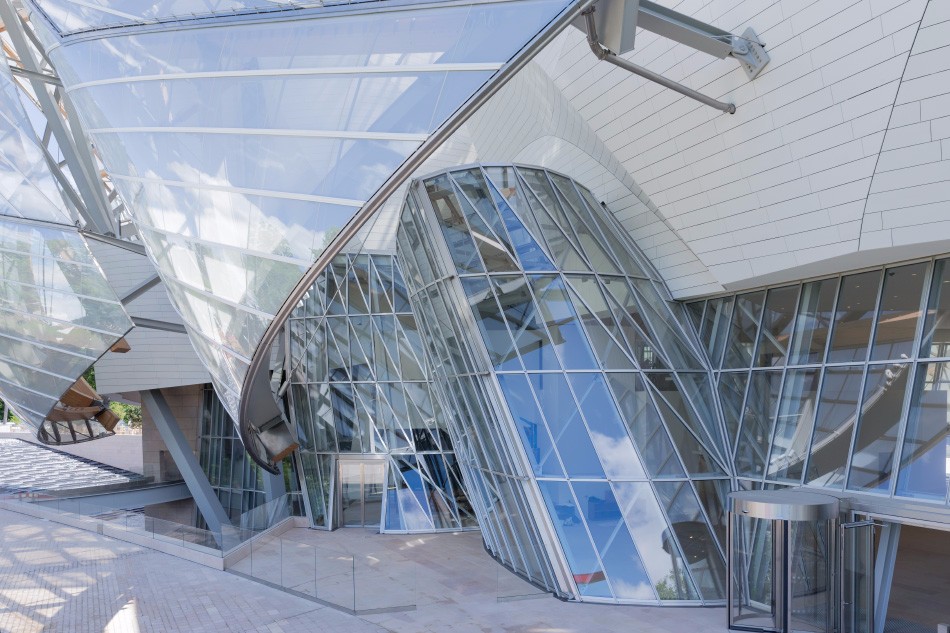 Frank Gehry’s utterly glamorous Fondation Louis Vuitton shimmers like a phantom schooner sailing over the greenery in the Bois de Boulogne. The Canadian-American architect has graced other cities with his architectural swirls, whorls and topsy-turvy boxes, but one would expect his latest project, a 126,000-square-foot contemporary culture center designed for LVMH supremo Bernard Arnault at a reported cost of $143 million, to have extra pizzazz — and it does. Jean-Paul Claverie, head of LVMH philanthropy and Arnault’s cultural adviser, has compared the Fondation’s instant status as a Parisian icon — it drew 400,000 visitors in four months — to that of the Eiffel Tower.

The Louis Vuitton Foundation’s inaugural exhibition featured a selection of Gehry’s architectural models and drawings for the building, which were brought to life in a series of multimedia displays. Photo by Martin Argyroglo, © Fondation Louis Vuitton. Top: The geometric birds set into the concrete facade of Pritzker Prize–winner Jean Nouvel’s new Philharmonie de Paris are echoed in foot paths that lead visitors through the grounds.

During the institution’s inaugural exhibition last October, a deliberately limited show of contemporary artworks and commissioned installations along with a display of Gehry’s architectural models and drawings for the Fondation, more eyes were focused on the building’s billowing glass “sails” — which gracefully arch over the white-concrete “icebergs” that house its 11 galleries — than on the art. But two pieces stood out even amid the architectural acrobatics: the rainbow-hued curtain of Ellsworth Kelly’s Spectrum VIII, installed in the Fondation’s 350-seat auditorium, and Olafur Eliasson’s Inside the Horizon, a site-specific suite of prism-shaped, sunflower-yellow reflective columns that line a waterway promenade in the institution’s Grotto.

According to Arnault, one of France’s wealthiest men, the FLV’s mission is to promote cultural creativity, “especially contemporary art,” and to foster “meaningful exchanges between artists and visitors.” To wit: Kanye West performed to a rapt crowd at a series of concerts held at the building earlier this month. Temporary exhibitions, meanwhile, display a mixture of works culled from the Fondation’s permanent collection, pieces drawn from Arnault’s personal cache and loans from around the world. Next up, “Keys to a Passion,” an exhibition running from April 1 to July 6, which will feature iconic 20th-century works, including Munch‘s The Scream, 1893, from Oslo’s Munch Museum; Matisse‘s The Dance, 1909, from the Hermitage in Saint Petersburg; and Léger‘s Three Women (Le Grand Déjeuner), 1921–22, from New York’s Museum of Modern Art.

Above the galleries housing these treasures, Gehry’s innovative sails, comprised of 3,600 glass panels, will continue to reflect gossamer visions of sky, clouds and trees. These can be viewed up close on the rooftop terrace, where tall wooden beams that resemble ships’ masts link to steel struts supporting the sails. Down below, a waterfall cascades into a dark, ceramic basin in the building’s courtyard, producing a veritable lake that flows under and around the building and adds stunning reflections to the extraordinary ensemble. 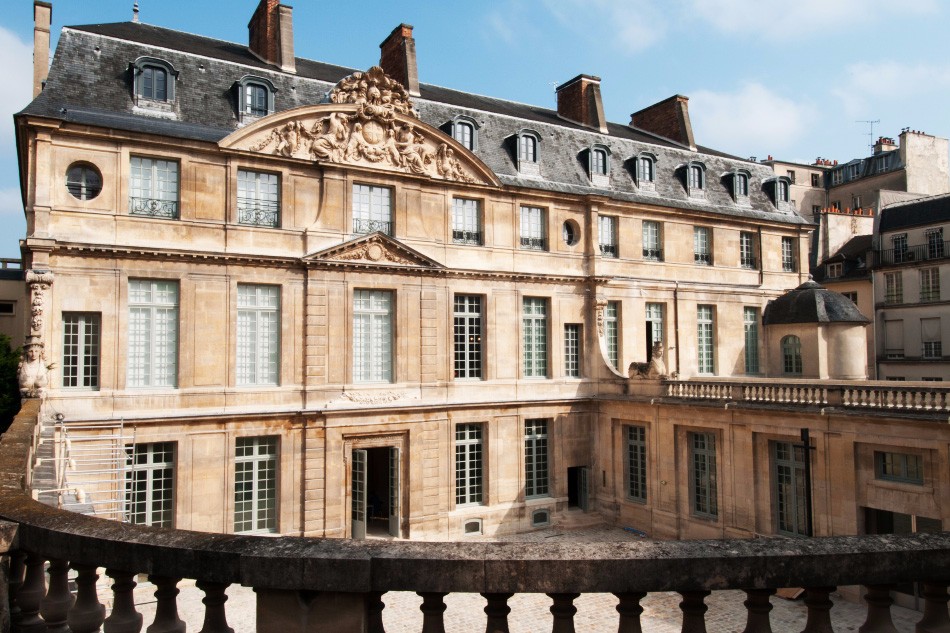 Newly reopened after delays and cost overruns, the Picasso Museum has been housed in a baroque private mansion, the 17th-century Hotel Salé, since its founding in 1985. Credit: Photo by Béatrice Hatala, © Musée National Picasso-Paris 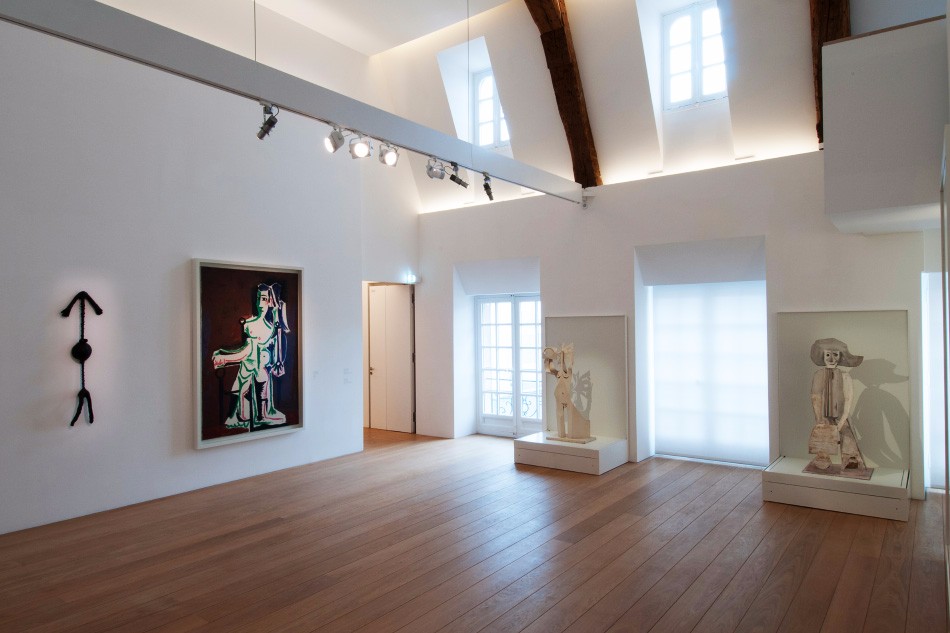 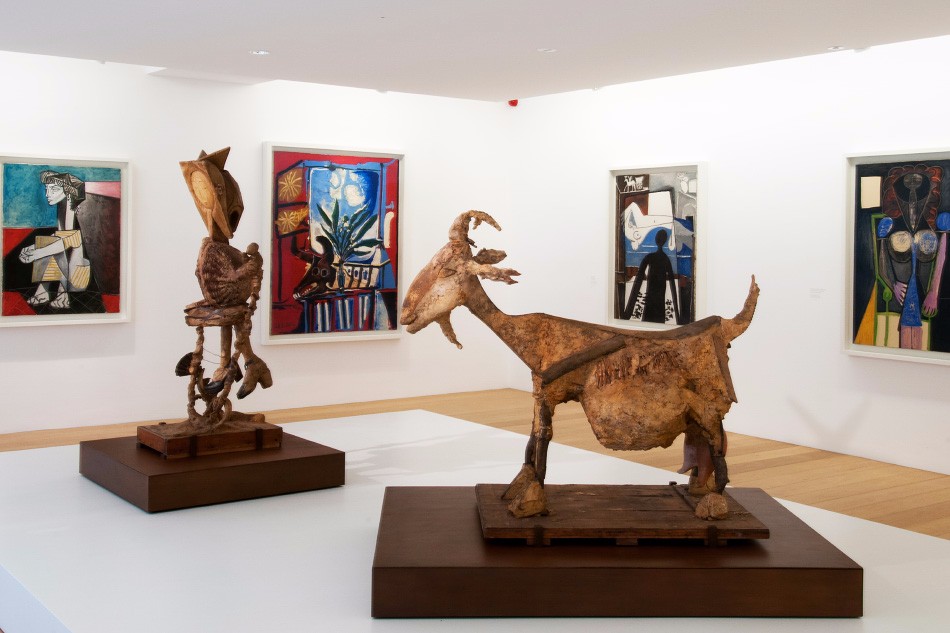 The show features a dynamic mix of the artist’s works in various mediums, juxtaposing his paintings and collages with pieces of sculpture and assemblage. Credit: Photo by Béatrice Hatala, © Musée National Picasso-Paris 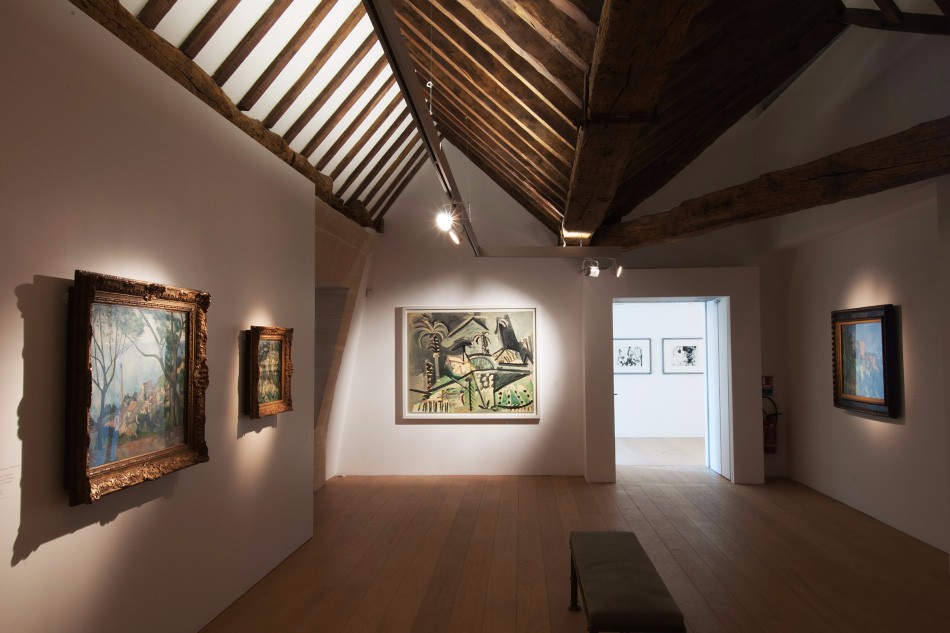 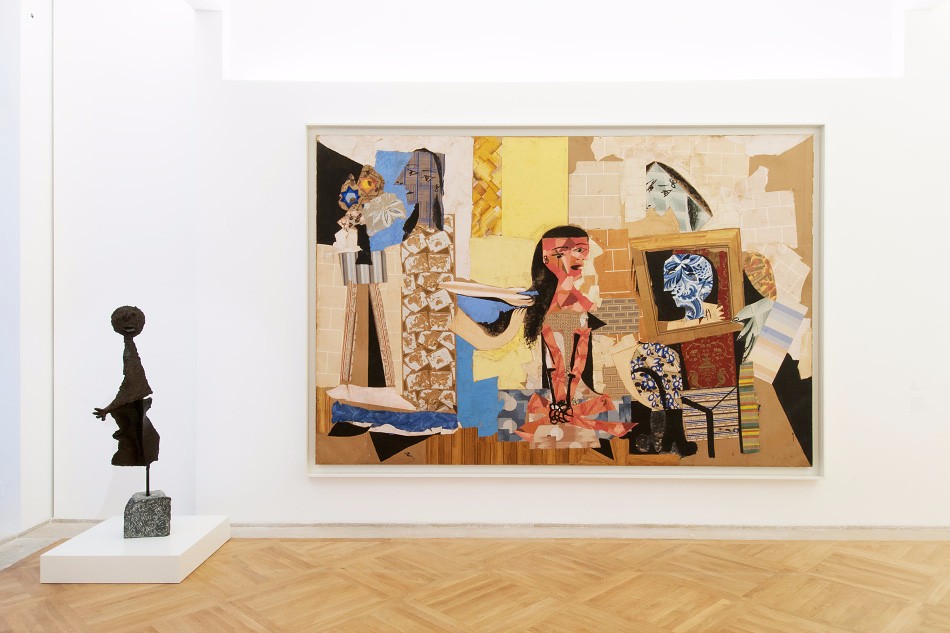 The world’s largest collection of works by Pablo Picasso is the draw at the newly renovated Picasso Museum, which re-opened after a five-year closure on October 25, the artist’s birthday, bringing with it a dazzling presentation of 400 pieces from its treasure trove of 5,000. Originally slated to cost $44 million (final cost: $58 million), the renovation was plagued by multiple bureaucratic disasters, from ballooning budgets and managerial missteps to missed deadlines. Well-documented psychodramas, meanwhile — including a staff revolt — led to the dismissal last spring of the museum’s president, Anne Baldassari, a brilliant Picasso scholar. Laurent Le Bon, who directed the successful launch of the Pompidou Metz in 2010, stepped in as president and brought her back to hang the inaugural exhibition, which remains on view until September 2015.

La Lecture, 1932, is one of some 5,000 Picasso works that constitute the holdings of the Picasso Museum, the world’s largest collection of his output.

Since it originally opened in 1985 with bequests from Picasso family members, the museum has been housed in the 17th-century Hotel Salé, in the heart of the Marais district. But the layout of the private mansion was never ideal for viewing art. Now, after moving administrative offices to new quarters, the museum has more than doubled its exhibition space, encompassing some 17,500 square feet that include 13 new galleries. The interiors were reconfigured by architect Jean-François Bodin, who also revamped the Museum of Modern Art of the City of Paris and parts of the Centre Pompidou. For the Picasso Museum, he created a soaring entrance hall from the former stables and a side courtyard, facilitating easy movement through the baroque building. He also designed a sculptural staircase that spirals up from the hall and leads to an outdoor cafe, sited on a terrace overlooking the courtyard.

Baldassari, meanwhile, spurns a purely chronological arrangement of Picasso’s works in favor of a virtuosic mix: A young self-portrait from his Blue Period; studies for Les Demoiselles d’Avignon, 1907; the vividly colorful, surrealist Man with Straw Hat and Ice Cream Cone, 1938; and a monochrome Cubist masterpiece from 1911, Man with Guitar. Art is about emotion, and Picasso provides an avalanche.

There are large-scale works — La Flûte de Pan, 1923, with its statuesque neoclassical male figures and magical flute; the bronze Bathers, 1956; the paper collage Femmes à leur toilette, 1937–38 — and tiny ones. Displayed in a glass case, a jaunty stick figure created with wood, nails and cement exemplifies the artist’s joie de vivre, while in another gallery there is a nod to Picasso as macho maestro: two stunning 1937 portraits of his lovers Dora Maar and Marie-Thèrèse Walter face off with the minimalist head of a bull. 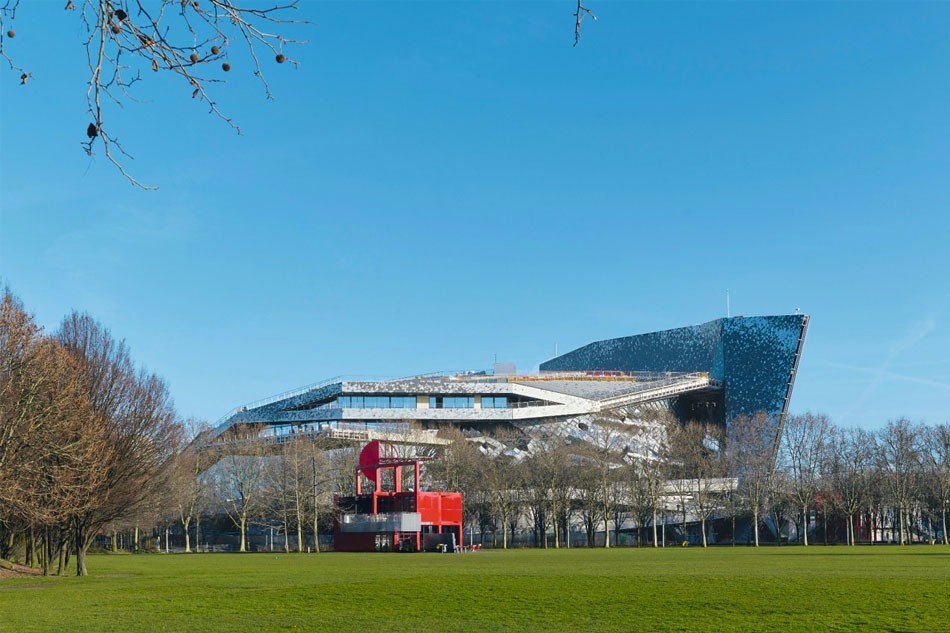 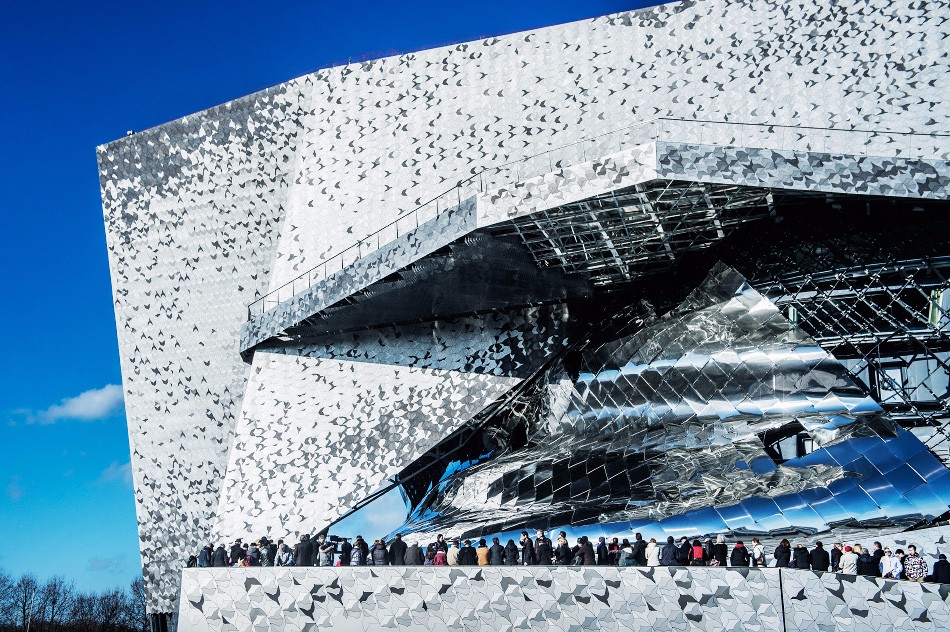 Although it is still under construction, the massive concert hall has been drawing crowds since opening its doors; its inaugural series of programs sold out almost instantly. Credit: Photo © Beaucardet 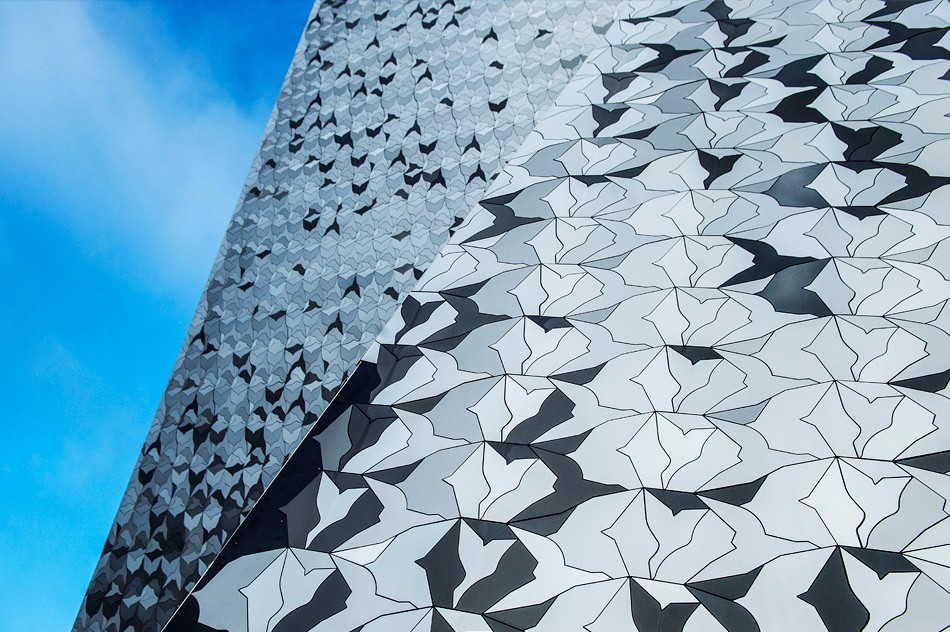 Viewed up close, the building’s shimmering facade reveals an aluminum matrix of illusionistic birds, in shades that range from gray to black. Credit: Photo © Beaucardet 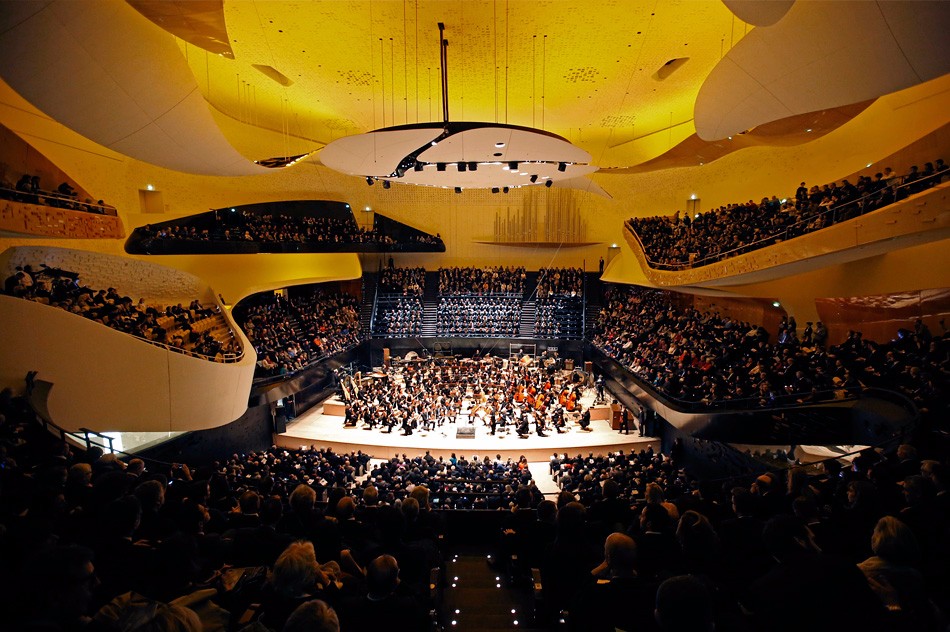 Inside the Philharmonie’s Grande Salle, which can accommodate up to 2,400 people, a centrally located orchestral plateau guarantees that all concertgoers are seated no more than 100 feet from the stage. Credit: Photo © AFP-Charles Platiau 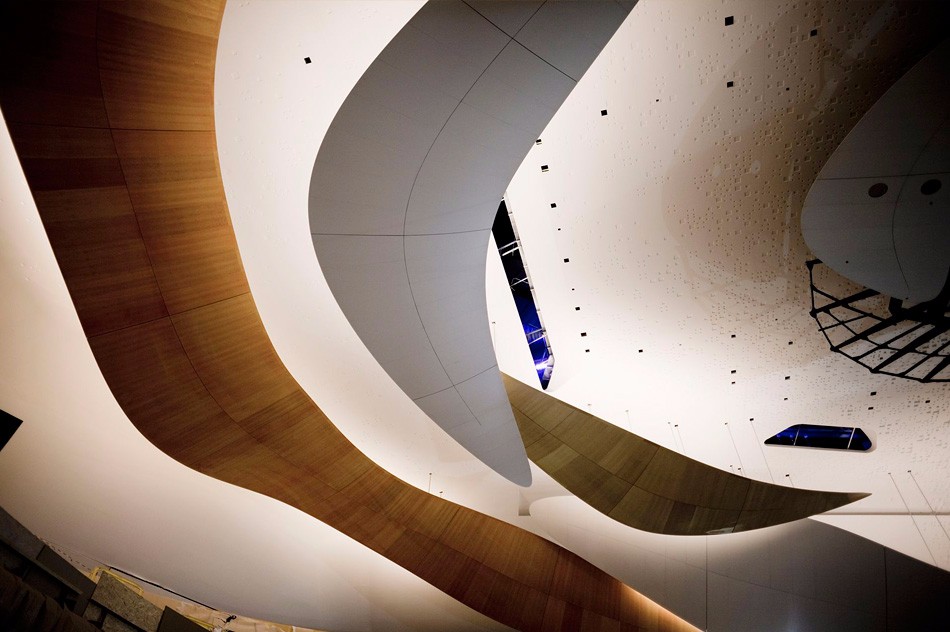 Despite ongoing construction, Pritzker Prize–winner Jean Nouvel’s new Philharmonie de Paris has opened its doors in the Parc de la Villette, in the 19th arrondissement. The building’s park-side facade, all sinuous layers of concrete and glass, is framed by lush greenery and set against the lipstick-red of a nearby kiosk by architect Bernard Tschumi, the park’s designer. (Long before Nouvel’s intervention, these brightly painted deconstructivist “follies,” which appear throughout the grounds, drew architectural pilgrims to the park.) Viewed from the front walk, the concert hall has the foreboding aura of a granite mountain, and its speckled facade seems to be awaiting final touches. When seen close-up, however, the specks turn out to be aluminum birds in shades ranging from gray to black, detailed elements of a massive mosaic that features hundreds of thousands of winged creatures.

The masterfully conceived concert hall was deliberately sited in this park, which borders on the Péripherique that separates central Paris from the suburbs, with the hopes of attracting visitors from less-advantaged neighborhoods and appealing to a younger crowd. Although the building is still unfinished, its projected cost has reportedly more than tripled to about $430 million; Nouvel, who is currently attacking the Philharmonie’s administration in the courts, boycotted the inaugural gala on January 14, calling it “premature.” 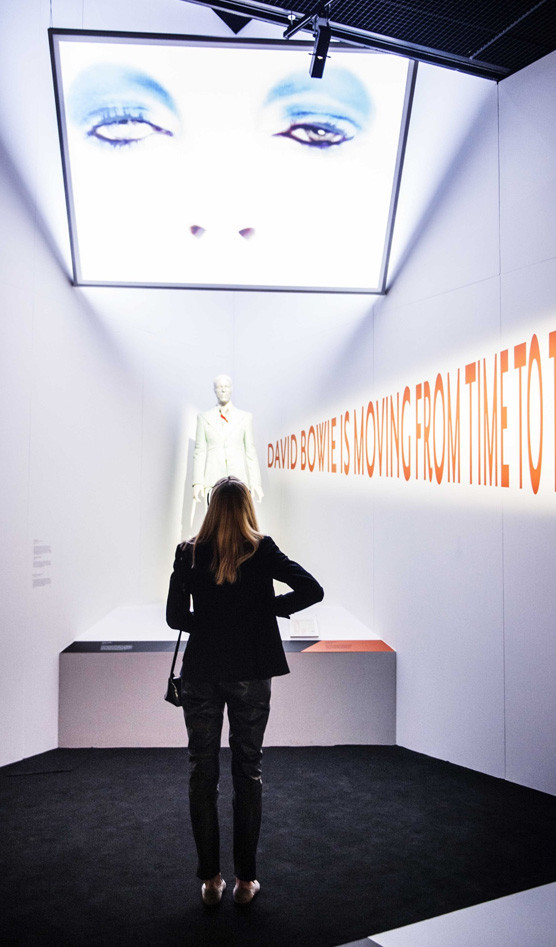 Currently on view at the Philharmonie, following its initial 2013 outing at the V&A, “David Bowie Is” offers viewers a multi-sensory experience of the British singer’s work — and of some of the concert hall’s new spaces.

But once you get inside La Grande Salle, none of this seems to matter. The main hall’s stunning design features a central orchestral plateau surrounded by a parterre level of seating and long, cantilevered floating balconies constructed in warm birchwood. Despite the hall’s capacity to accommodate an audience of 2,400, concertgoers experience remarkable intimacy with the musicians: No seat is further than about 100 feet from the conductor, and the sound is sumptuous.

The Philharmonie’s exceptional inaugural programs — including Sir Simon Rattle’s appearance in February, as conductor of the Berlin Philharmonic — all sold out almost instantly. Upcoming highlights include the Mariinsky Stradivarius Ensemble, conducted by Valery Gergiev, on March 26, and on April 18, selections from Bertold Brecht and Kurt Weill’s The Threepenny Opera, performed by the Orchestre de Paris — the new hall’s splendid resident orchestra — with special guest Ute Lemper.

On the ground floor, in the educational wing, reasonably priced studio workshops are open to all and a variety of classes, including lessons in electric guitar, Caribbean steel drum or African percussion instruments, are on offer. Meanwhile, up through May 31, a ground-floor exhibition space features “David Bowie Is,” the blockbuster show mounted by London’s Victoria and Albert Museum in 2013. Equipped with Sennheiser headsets playing a selection of Bowie songs and interviews, visitors can explore some 300 objects and artifacts from the performer’s career, including the original hand-written lyrics of “Ziggy Stardust,” his asymmetric Aladdin Sane body stocking and one of his “Space Oddity”–era guitars.

Summer should bring the hall’s new restaurant, Le Balcon, slated to feature an alfresco terrace, as well as the opening of a roof-top observation platform that will provide a sweeping vista over the park and across the city that never ceases to surprise.