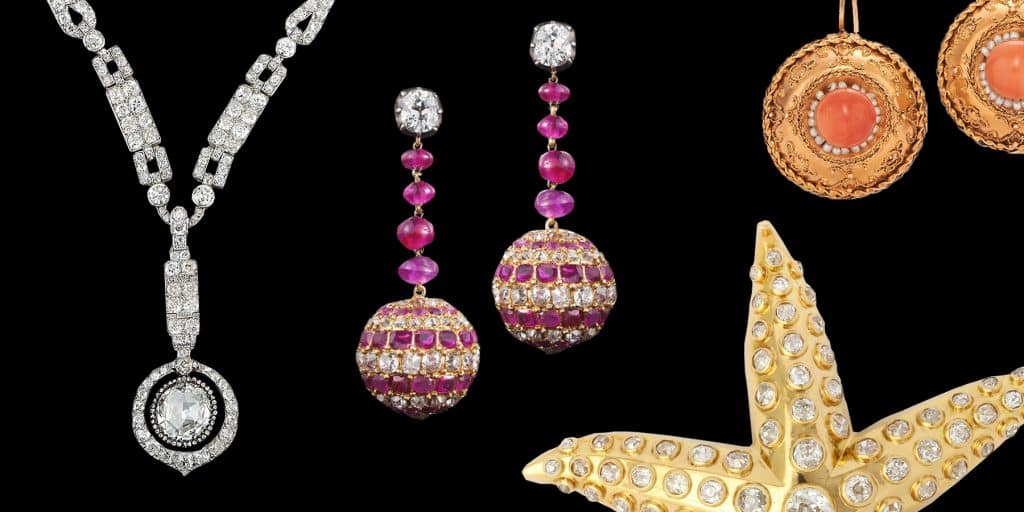 November 17, 2019Outside of museum exhibitions and trade fairs, jewelry lovers don’t have many opportunities to convene around their preferred art form. That’s one of the reasons New York City Jewelry Week (NYCJW) has become a much-anticipated highlight of the jewelry world’s calendar. Last year’s inaugural edition drew 10,000 guests to events throughout the city, ranging from goldsmithing at the David Webb workshop to chatting with the new guard of Native American jewelers at Mahnaz Collection. It’s a unique opportunity to engage with jewelry in all its facets, from soup to sautoirs.

This year’s NYCJW, running from November 18 to 24, promises even more boldface names and dazzling baubles to get jewelry enthusiasts’ hearts racing, and 1stdibs is proud to be a partner in the week’s events. Three top 1stdibs dealers even invited us into their New York galleries so we could share with our community an exclusive look, in videos by Douglas Keeve, at some of their most covetable wares. Follow @1stdibsjewels on Instagram, and join us this week as veteran accessories editor Maria Dueñas Jacobs brings some of these extraordinary, rarely-seen pieces “out of the vault” and onto 1stdibs.

Here, get to know these exceptional dealers, and discover more of their incredible pieces, from Belle Époque treasures to gems by modern masters.

For NYCJW, Macklowe Gallery will present an intimate look at the best of jewelry from the past. It will also introduce guests to one of today’s most dynamic new talents, contemporary jeweler Neha Dani, who will be in-store for a conversation about her singular designs. Later in the week, Macklowe’s expert staff will lead an interactive course on how to date jewelry from the Victorian era through today. 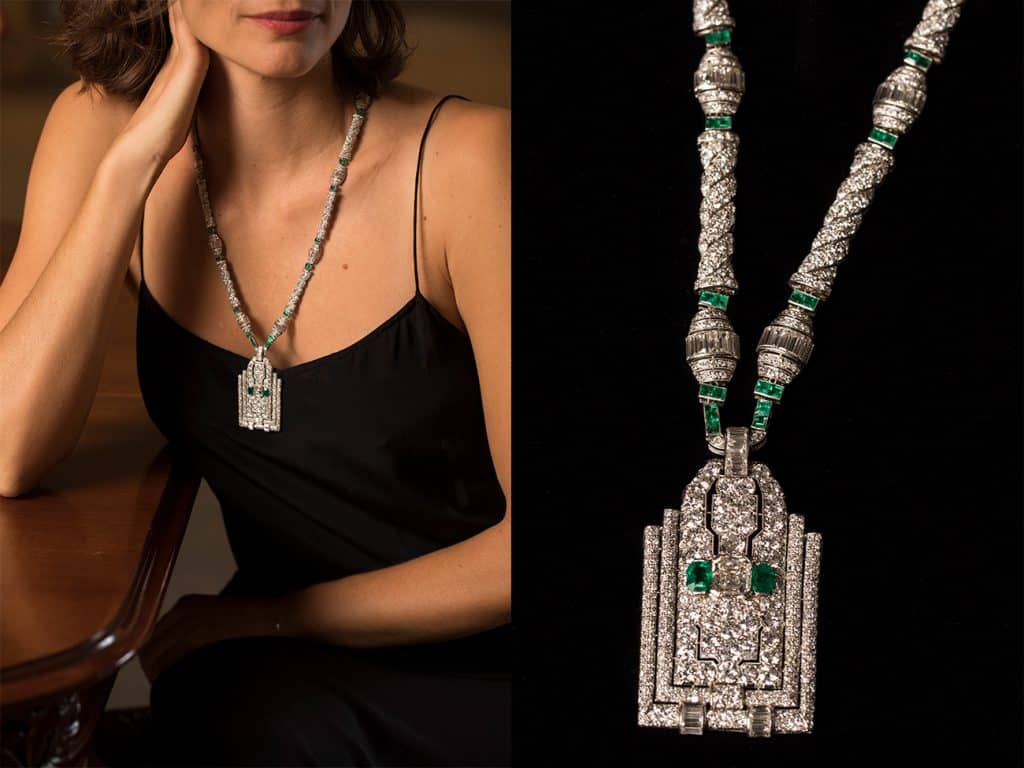 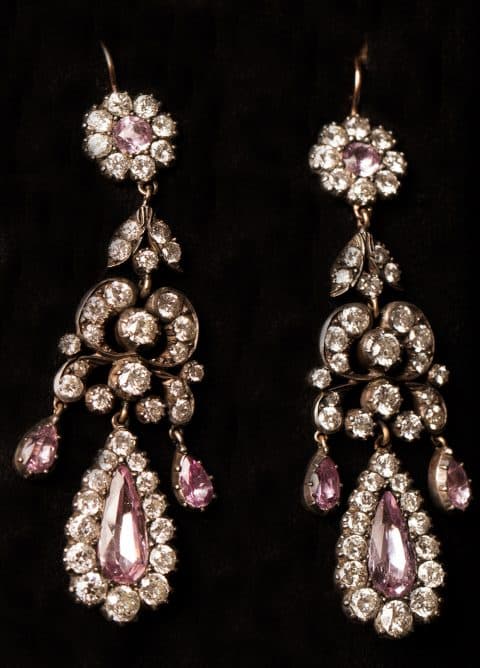 These Georgian diamond and pink-topaz earrings are among the remarkable pieces Macklowe offers dating to the Victorian era through the 1980s.

Lloyd and Barbara Macklowe established their eponymous gallery 50 years ago, with an initial focus on Art Nouveau furniture and decorative arts. Today, it is one of the preeminent purveyors of French treasures from that era, along with a staggering assortment of glass and lamps by Louis Comfort Tiffany. The Macklowes’ Art Nouveau connoisseurship eventually extended to the movement’s jewelry, like the ornate designs of René Lalique and Louis Zorra. While jewels from the turn of the 20th century remain a specialty, their collection now spans from the Victorian era through the 1980s.

Today, the gallery is led by the Macklowes’ son Ben and his wife, Hillary, who continue to focus on works of historical and artistic significance. Macklowe Gallery’s collection is filled with museum-worthy pieces, but the items in their collection are just as covetable for their inherent beauty. Antique gems commingle with 20th-century ones, the sleek Art Deco designs of Mauboussin and Tiffany & Co. conversing comfortably with the bold gold ’70s creations of Bulgari and Van Cleef & Arpels. 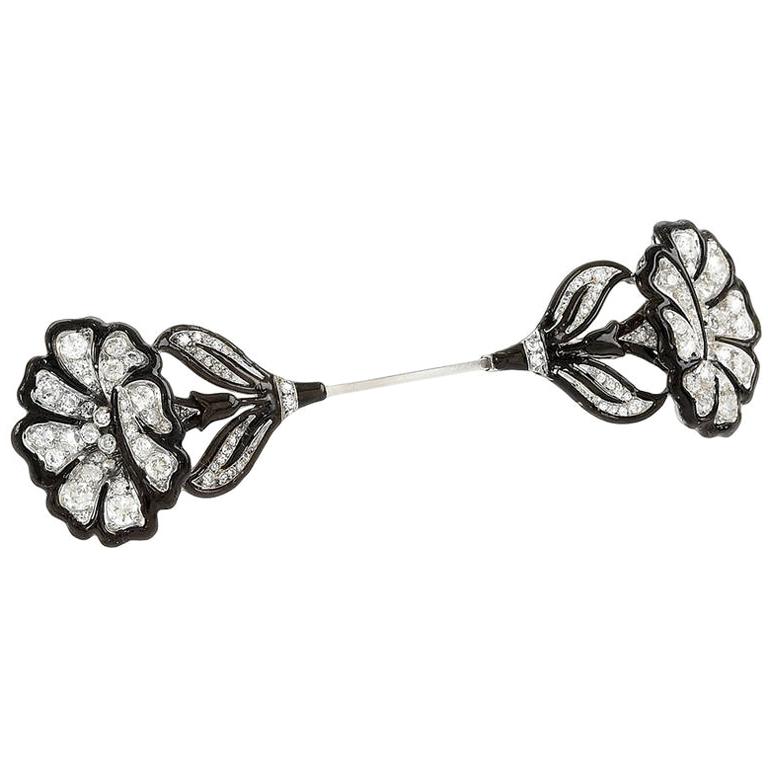 “In the nineteen twenties, Cartier popularized a form of brooch called a cliquet, now more commonly known as a jabot, that was meant to elegantly clasp two ends of a piece of clothing. This particular jabot is a wonderfully rare example of a floral form of the past being revisited in the architectural Art Deco style.” 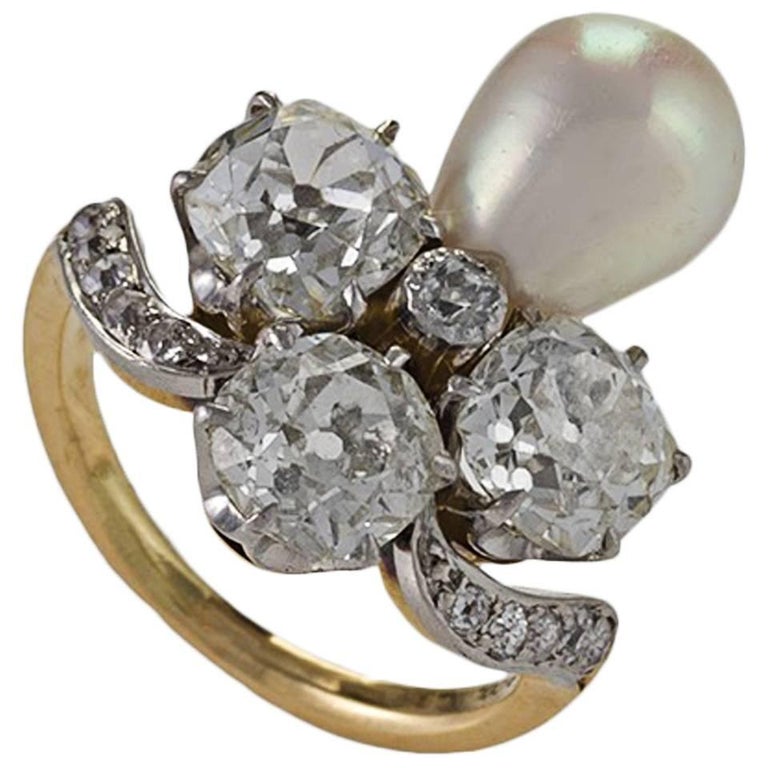 “Famed American Art Nouveau firm Marcus & Co. created this unusually sumptuous Edwardian ring, featuring three diamonds of more than a carat each and a large natural pearl. It embodies the whimsy and fancy-free feeling of the Edwardian court.” 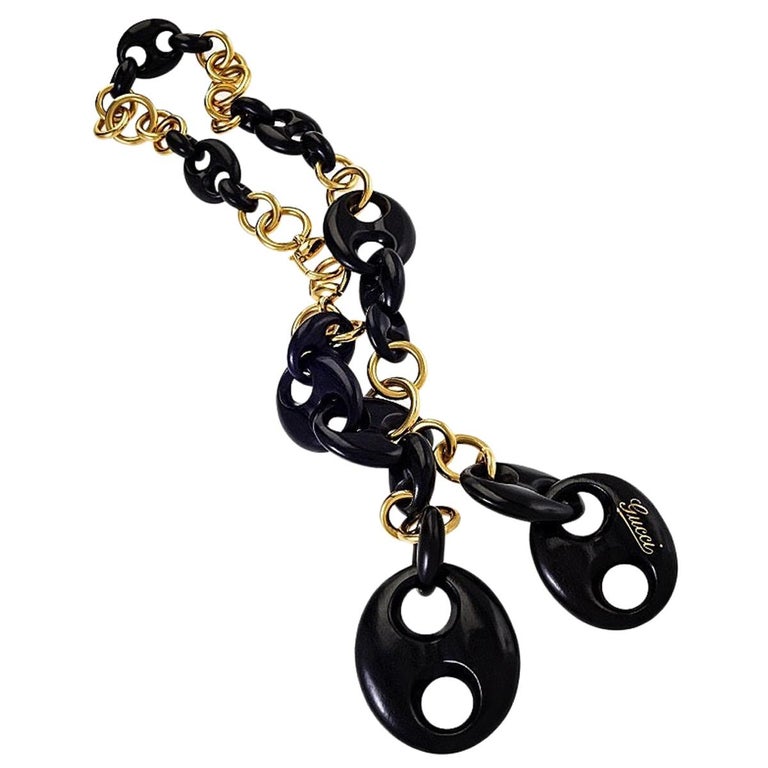 “This timeless Gucci piece, executed on a singularly grand scale, is given a wonderful subtly earthy sense by the large dark-wood links in Gucci’s signature horsebit form.” 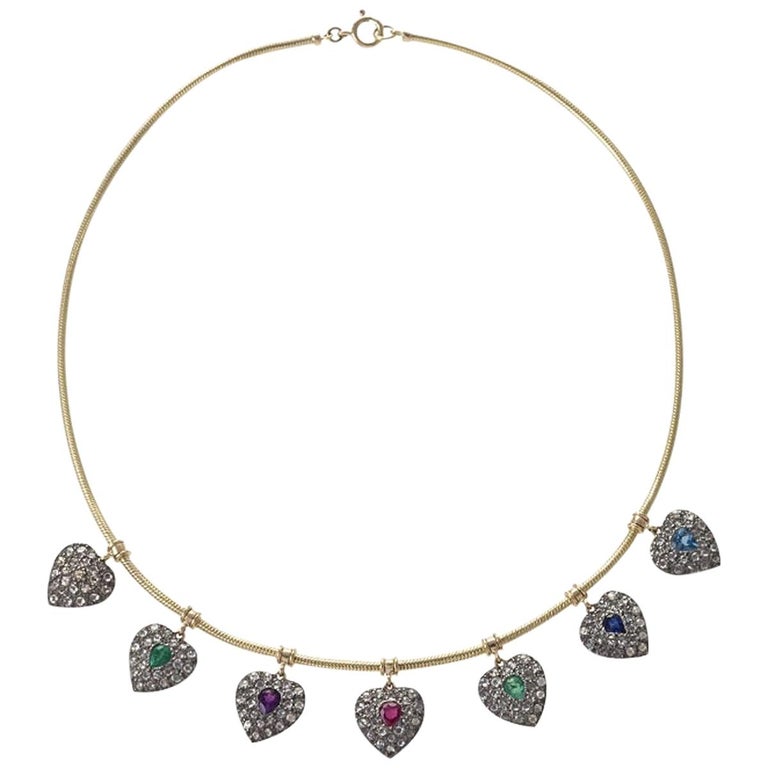 “Acrostic jewelry, comprising a series of stones whose first letters spell out a word of affection, was immensely popular during the highly sentimental Victorian era. This necklace, whose charms feature center stones of diamond, emerald, amethyst, ruby, emerald (again), sapphire and topaz, is meant to say DEAREST.” 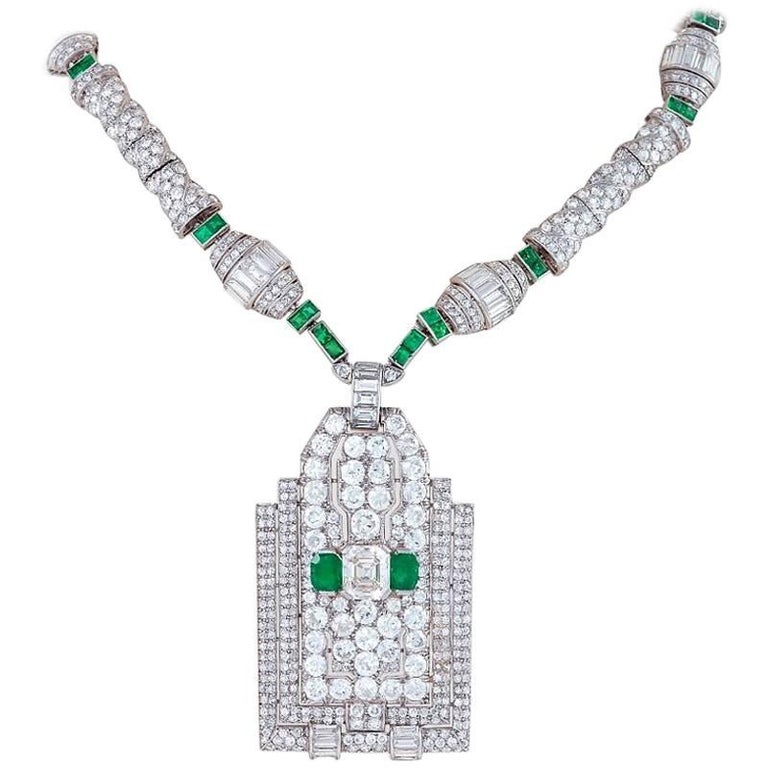 “Henri Picq had one of the most important workshops in early twentieth-century Paris. Picq was the main supplier for Cartier, among other houses, between 1900 and 1918 and executed some of its most avant-garde designs, such as the Tutti Frutti jewels. He also designed and produced a bracelet exhibited at the revolutionary Paris Exposition Universelle in 1925.” 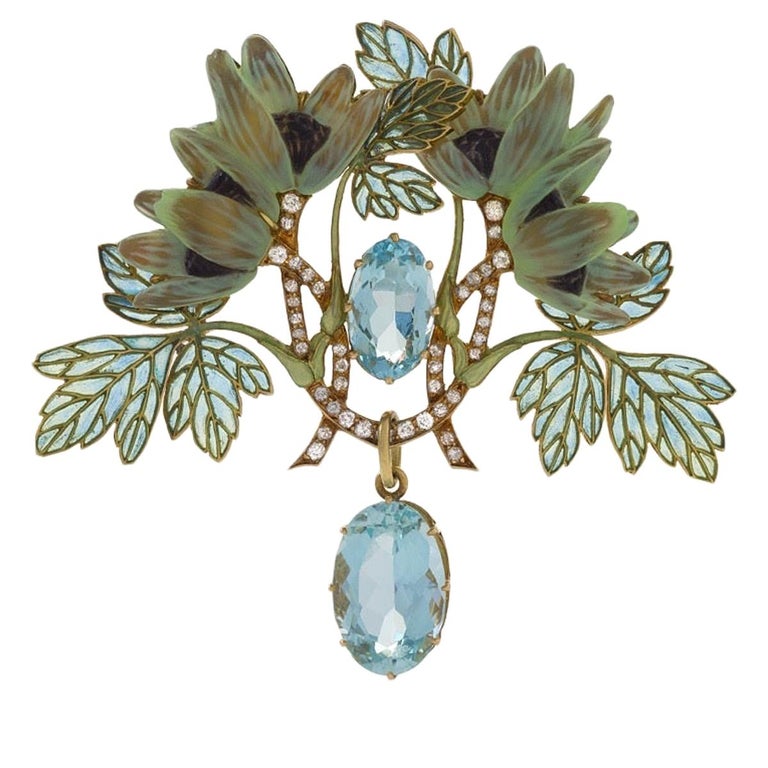 “This brooch is an exceptionally rare masterwork by the great René Lalique. It is actually one of a series of four unique pieces depicting the stages of young courtship via the stages of the wood anemone flower. This particular piece represents the very first stage of courtship: the intimate refusal, symbolized by the gentle closing of the anemone blooms.”

Out of the many treasures in its collection, Fred Leighton is putting the spotlight on brooches for NYCJW. Rebecca Selva, Leighton’s chief creative officer, has curated a selection of its most eye-catching pins and will host a talk on how to wear them in a modern way. 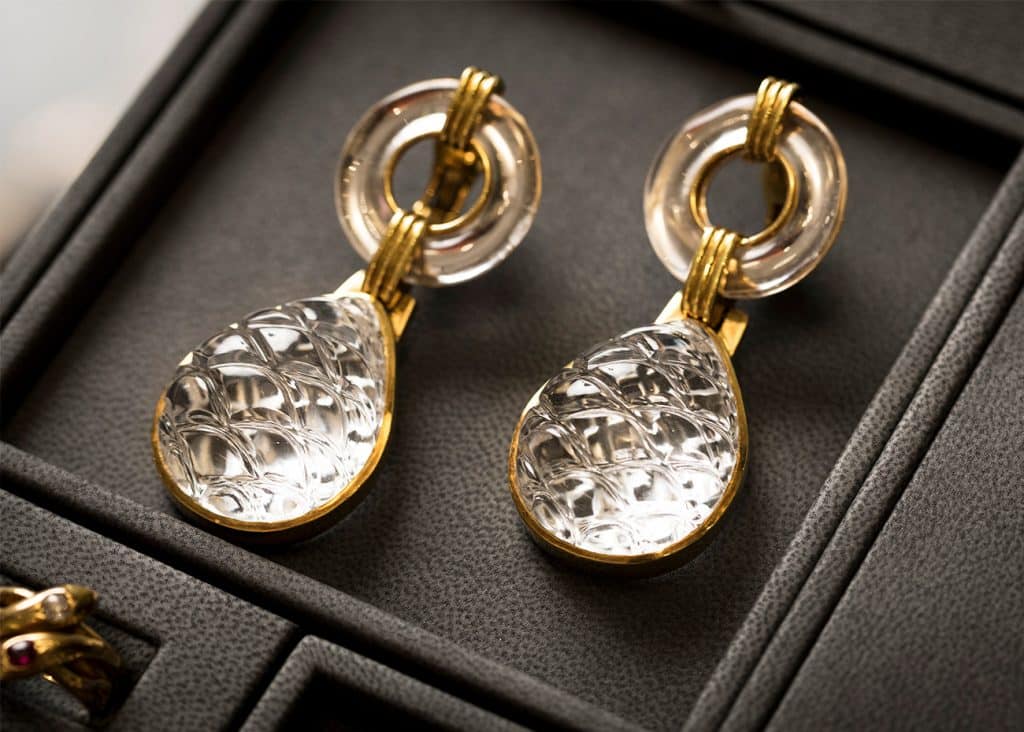 These 1970s rock crystal and gold pendant earrings are by David Webb. 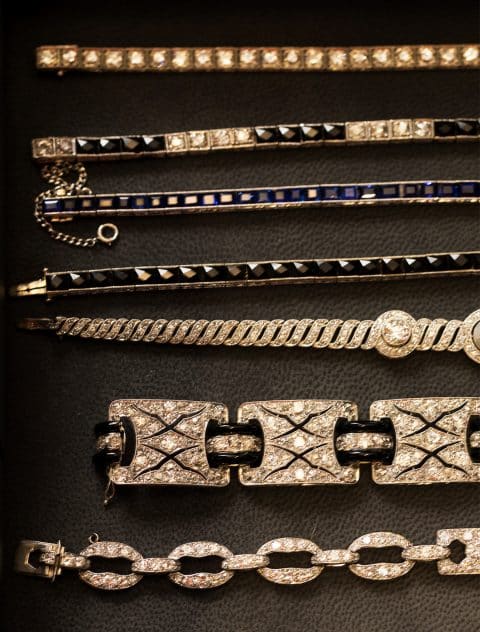 Fred Leighton sparked an interest in and appreciation of vintage and antique jewelry like these gem-encrusted Art Deco bracelets, which include two Cartier designs: one with carré-cut sapphires (third from the top) and a platinum-and-diamond bracelet (bottom).

Today’s estate-jewelry collectors owe a lot to the late Fred Leighton. Beginning with a humble Greenwich Village shop in the 1960s, Leighton sparked an interest in and appreciation of jewelry from the past — pieces that, at the time, were often overlooked, if not broken up for parts. Thanks to his efforts, antique jewels came to be considered collectible works of art. Eventually moving to a plush Upper East Side boutique, Leighton’s discerning eye attracted legendary tastemakers including Diana Vreeland, Jackie Onassis and Elizabeth Taylor.

Leighton’s collection comprised pieces from the 18th century through the 1970s — from Georgian rivières to retro brooches — including superlative examples from every era. The firm today is characterized by the same eclecticism, combining designs from the toniest heritage houses, like Boivin and Boucheron, with works by such modern masters as Lauren Adriana. It has counted among its treasures numerous holy-grail pieces, and its gems are regularly seen on the red carpet, worn by luminaries like Meryl Streep, Lupita Nyong’o, Nicole Kidman and Jared Leto. 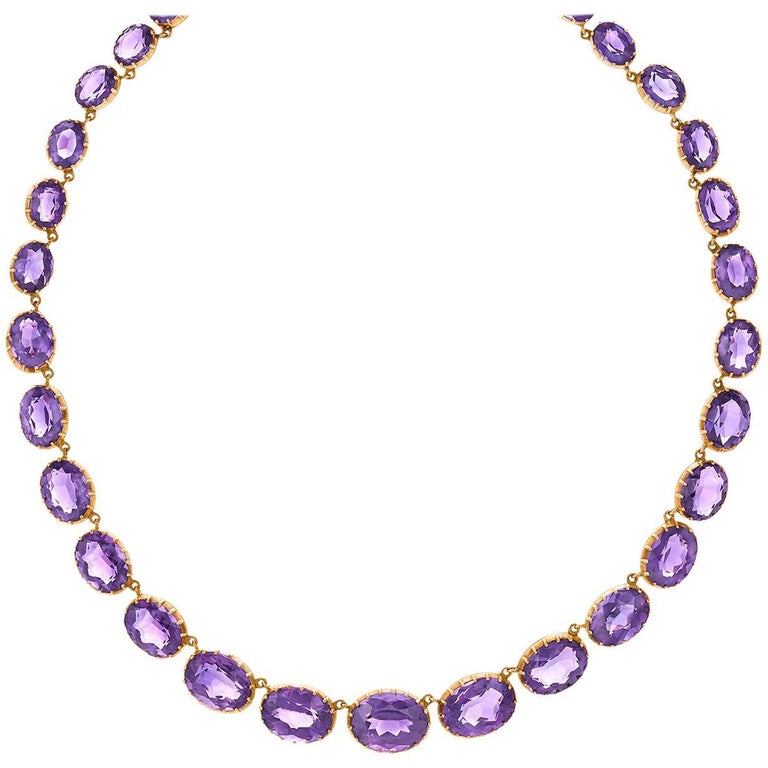 “A nineteenth-century colored-gemstone rivière is a timeless classic. Favored jewels at the time, they were made with vibrantly hued amethysts, citrines, aquamarines, pink topazes and garnets. These necklaces are as alluring and wearable today as they were then!” 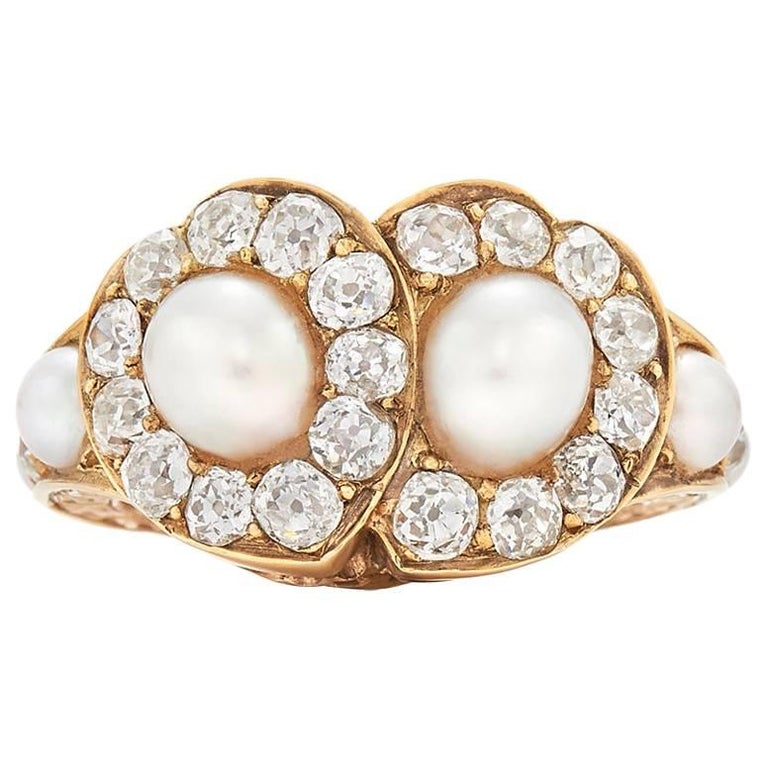 “The twin-hearts ring is a gorgeous antique jewel. Imbued with sentiment and beautifully made with pearls and diamonds, it is an exquisite token of love.” 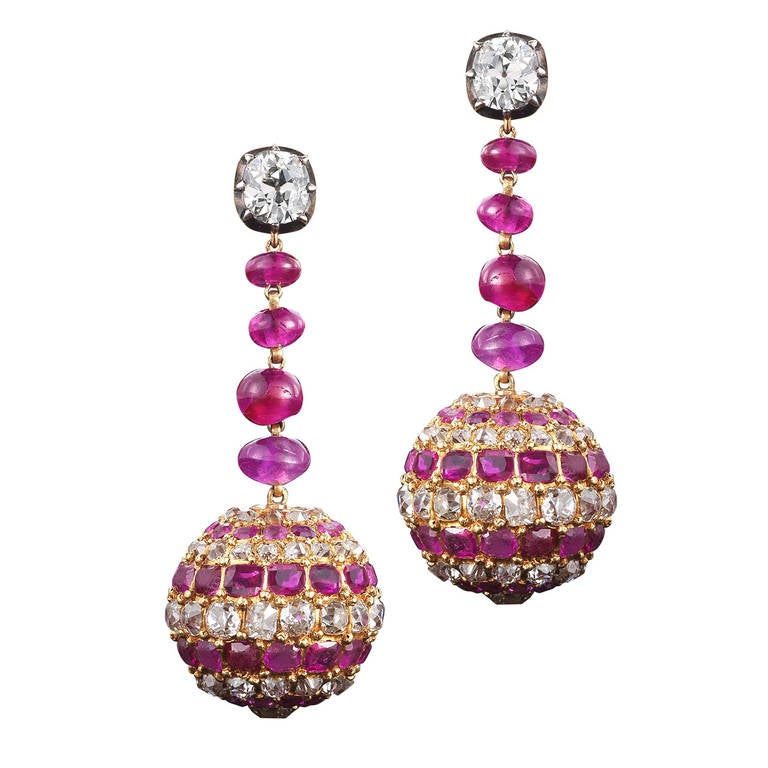 “Fred Leighton made these sumptuous ruby and diamond pendant earrings  — a beautiful marriage of old and new. The drops are antique and suspended from a stream of ruby beads and a collet-set diamond.” 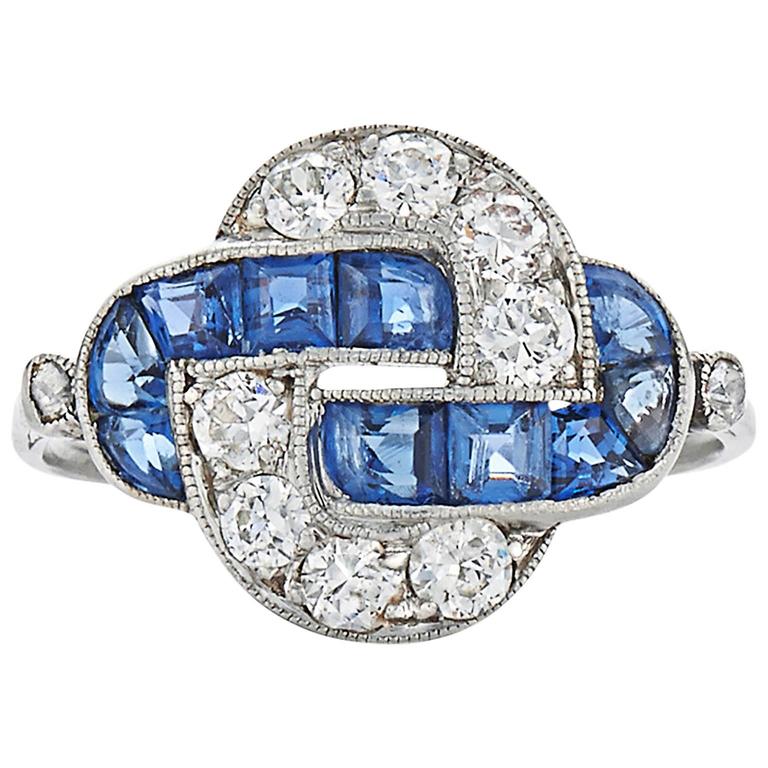 “The Art Deco period produced jewels that continue to captivate with their elegant and refined design. This beautiful diamond and sapphire knot ring is an easy-to-wear and distinctive jewel!” 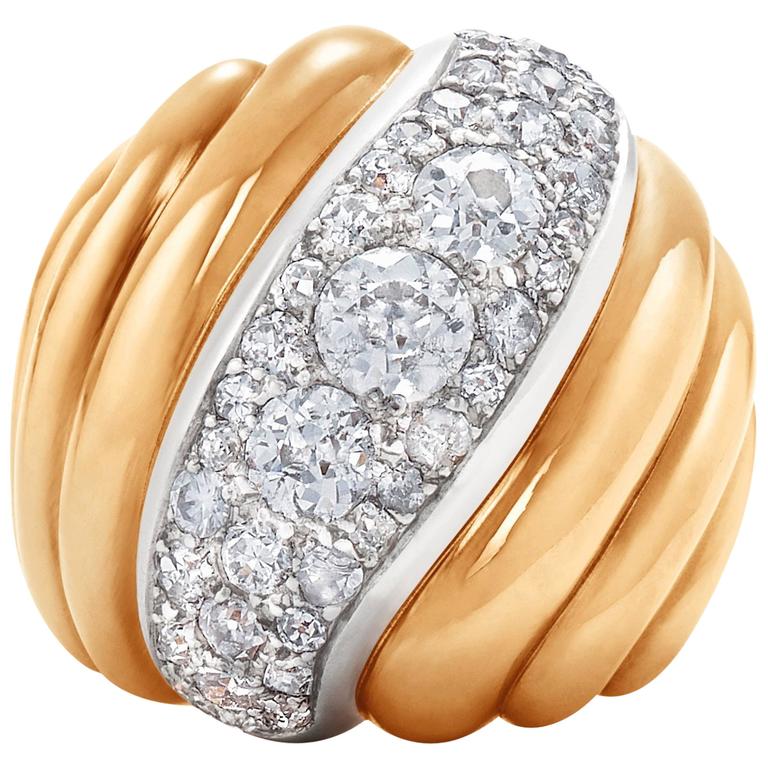 “Ultra-chic and sculptural, this gold and diamond domed ring by Suzanne Belperron, one of the world’s greatest jewelry designers, is a fantastic piece. A visionary who broke the mold with her unique aesthetic, Belperron produced incredibly exciting and inspired jewels that were sensual and curvaceous.” 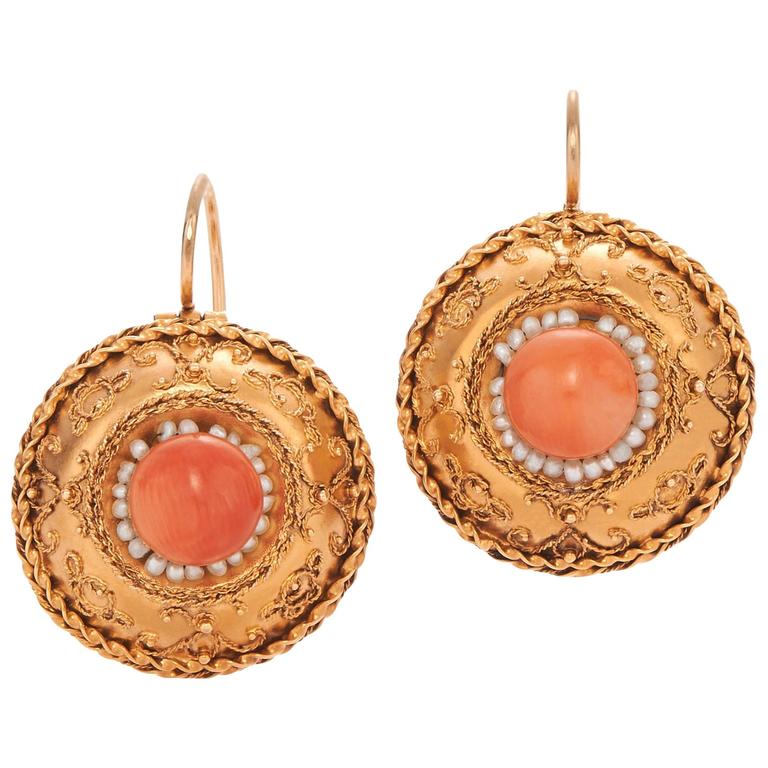 “The nineteenth-century Etruscan Revival movement drew inspiration from antiquity, specifically the intricately worked ancient jewels found in excavations near Rome in the early eighteen hundreds. These coral, pearl and gold earrings are lovely expressions of the Etruscan Revival style and so easy to wear!”

The Saidian family has been dealing exquisite gems for five generations, beginning in Iran in the 1850s. Since setting up shop in New York, in 1988, the firm has built a reputation for offering exceptionally rare jewels with illustrious provenances. 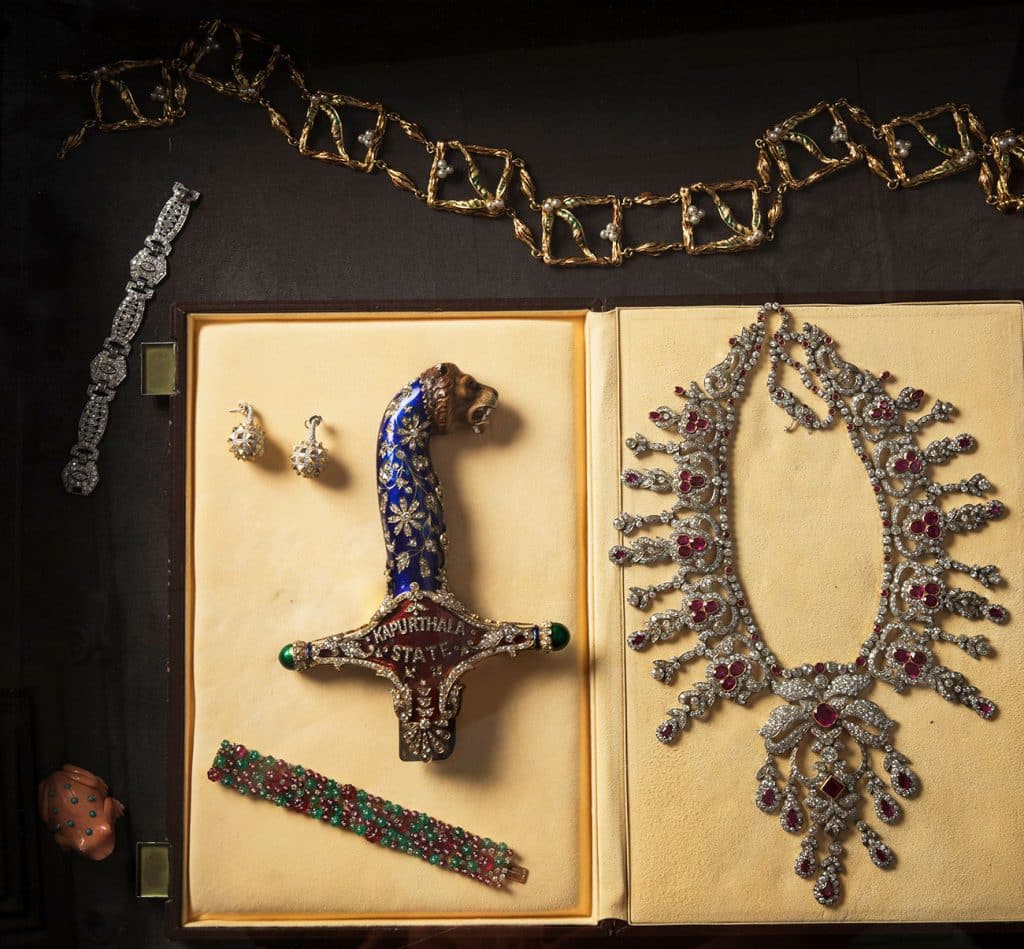 The treasures offered by Joseph Saidian & Sons include the Bulgari Tutti Frutti carved emerald, ruby and spinel bracelet shown bottom left. On the right is a ca. 1910 Belle Époque ruby and diamond necklace composed of more than 100 carats of unheated Burmese rubies and around 100 carats of diamonds.

The Saidians have handled numerous pieces with royal pedigrees, including the Westminster tiara, commissioned by the second Duke of Westminster; and the Alba Russian tiara, owned by the 18th Duchess of Alba (now also  known as the Alba Saidian tiara). Other notable pieces that have passed through the firm’s hands include a Cartier emerald pendant from the Duchess of Windsor’s collection, JAR natural pearl and diamond earrings once owned by Ellen Barkin and a Van Cleef & Arpels emerald and diamond cuff previously belonging to Brooke Astor. 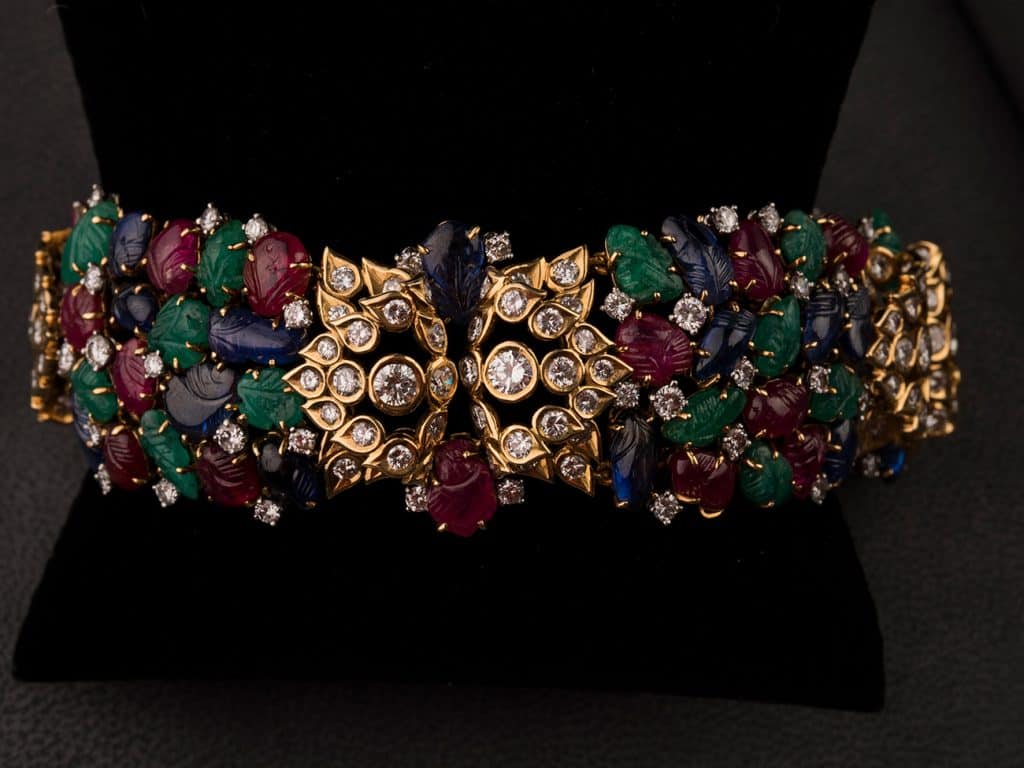 This 1950s Cartier Tutti Frutti bracelet, part of a set including a necklace, features diamonds, emeralds rubies and sapphires.

A passion for jewelry is in the Saidians’ blood. Ariel Saidian, the founder’s great-grandson, who now heads the business, began dealing as a teen and took GIA classes before graduating high school. He continues the family’s specialty in marquee 20th-century designs, boasting an especially impressive array of works from Cartier and Van Cleef & Arpels, as well as several unique pieces by David Webb. 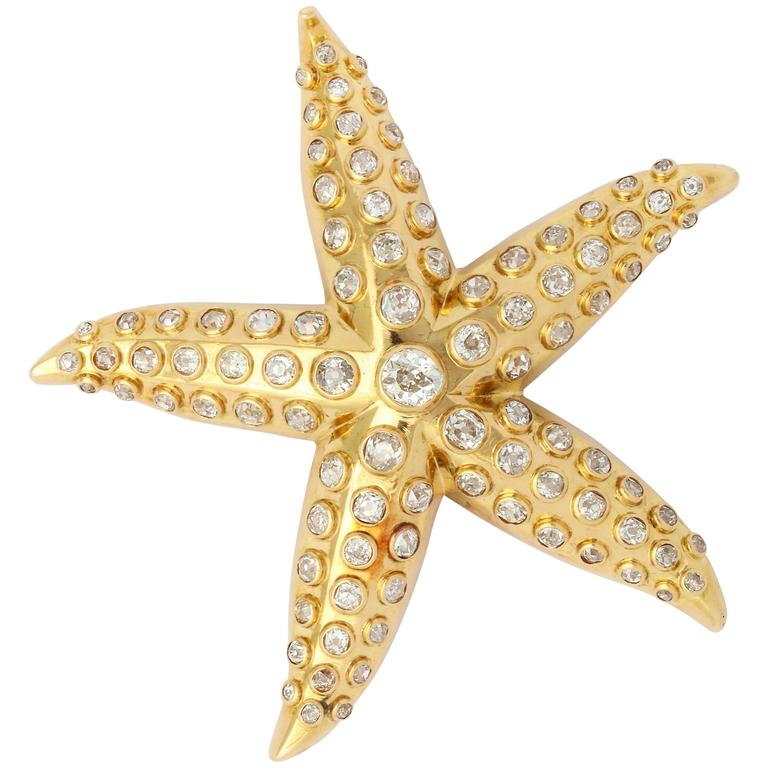 “An iconic starfish motif by one of the most sought-after French jewelers. Similar Boivin designs have been published in books, and a larger example is in the Boston Museum. Simple but still legendary.” 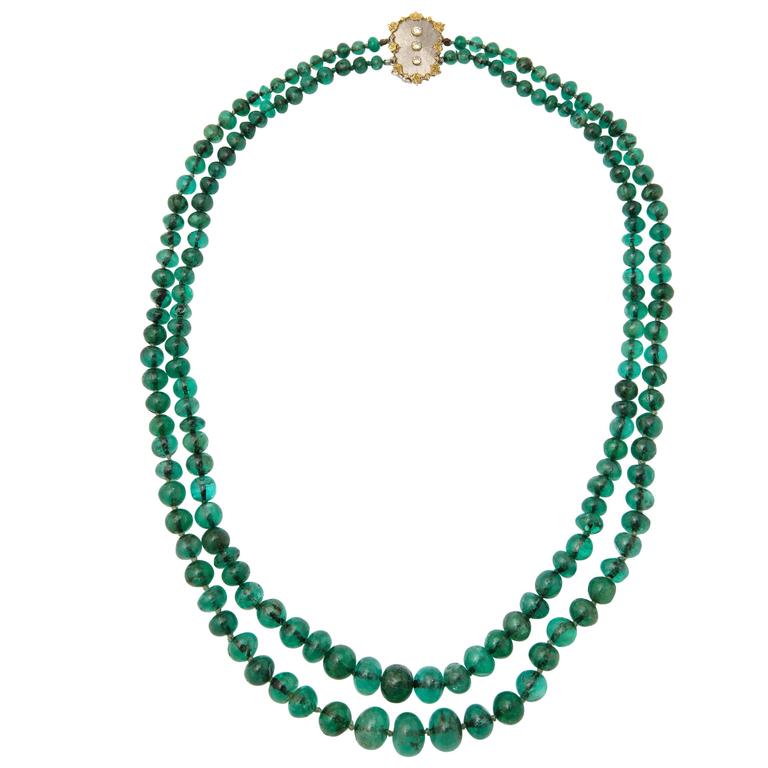 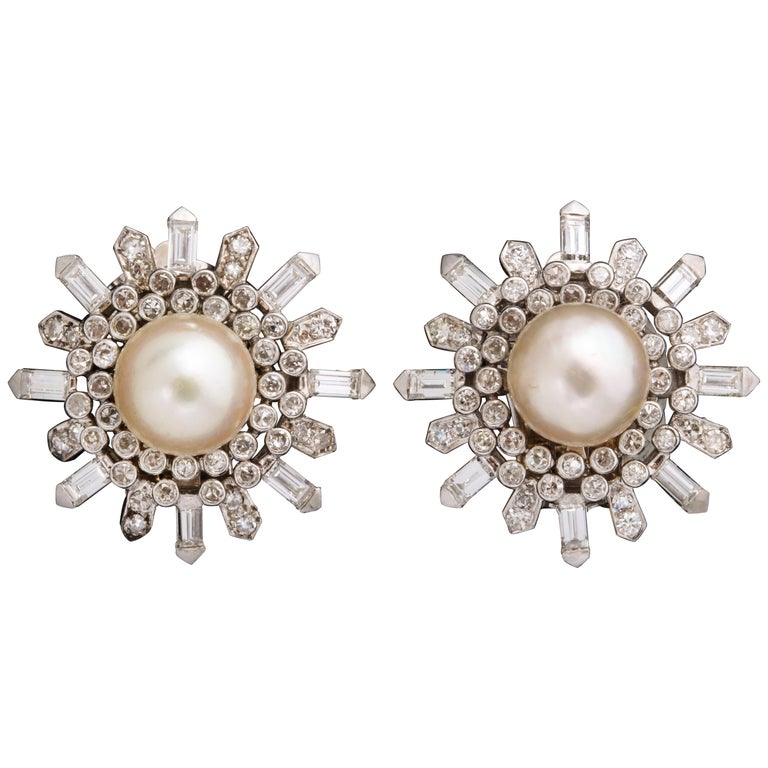 “A great interpretation of the classic pearl earring, made by the greatest jewelry maison of all time. I love the use of mixed-cut diamonds.” 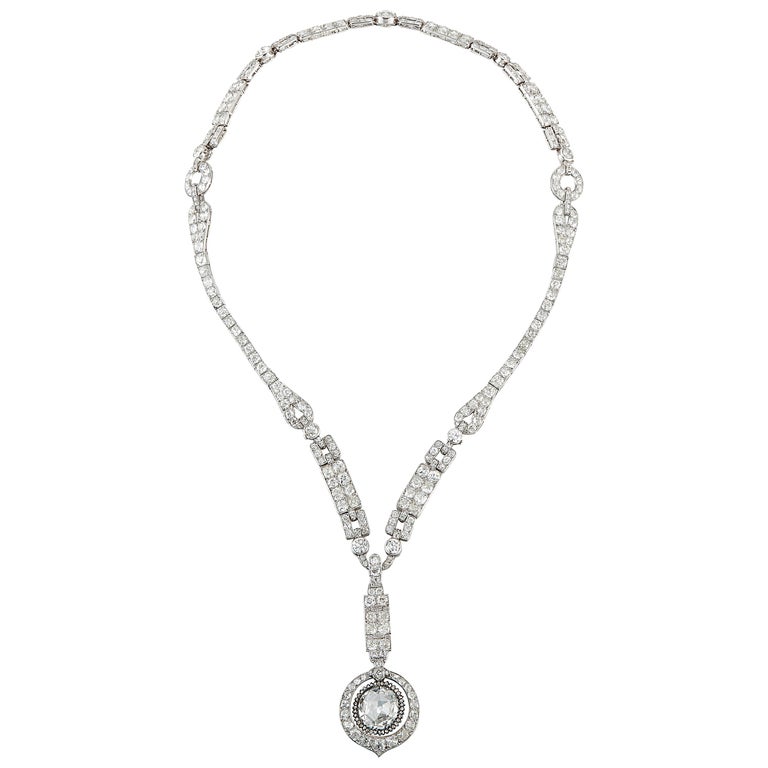 “This is as good as jewelry gets: an impossibly rare center diamond that cannot be matched, a wonderful and interesting provenance and still just as chic, elegant and wearable as when it was made, about one hundred years ago. Cartier at its absolute best!” 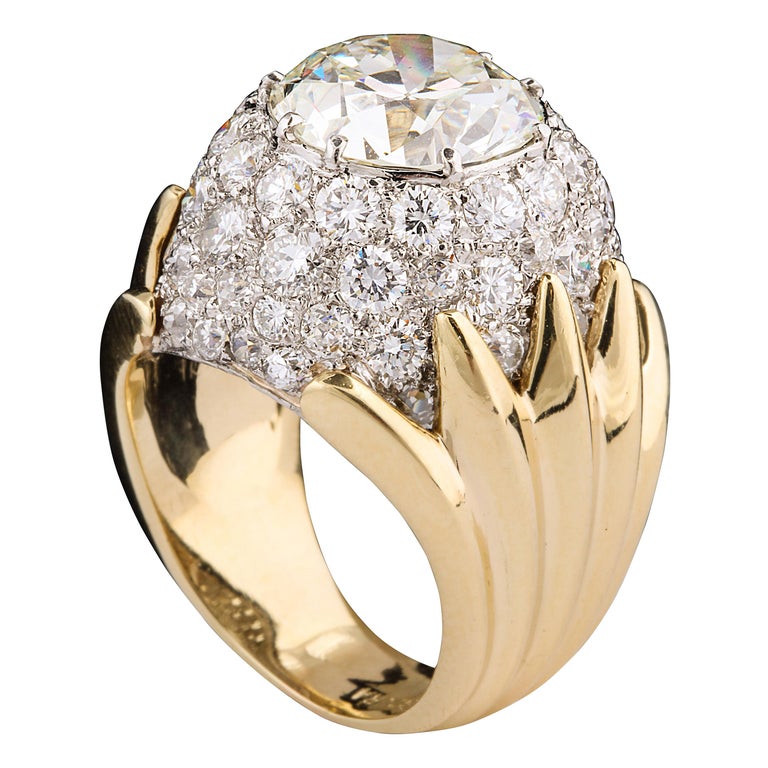 “A very well-priced ring with a large center diamond by a great designer. I love that a woman can receive this as an engagement ring or a man who is bold enough can adorn himself with it. A jewel that needs to be interpreted by its next owner!” 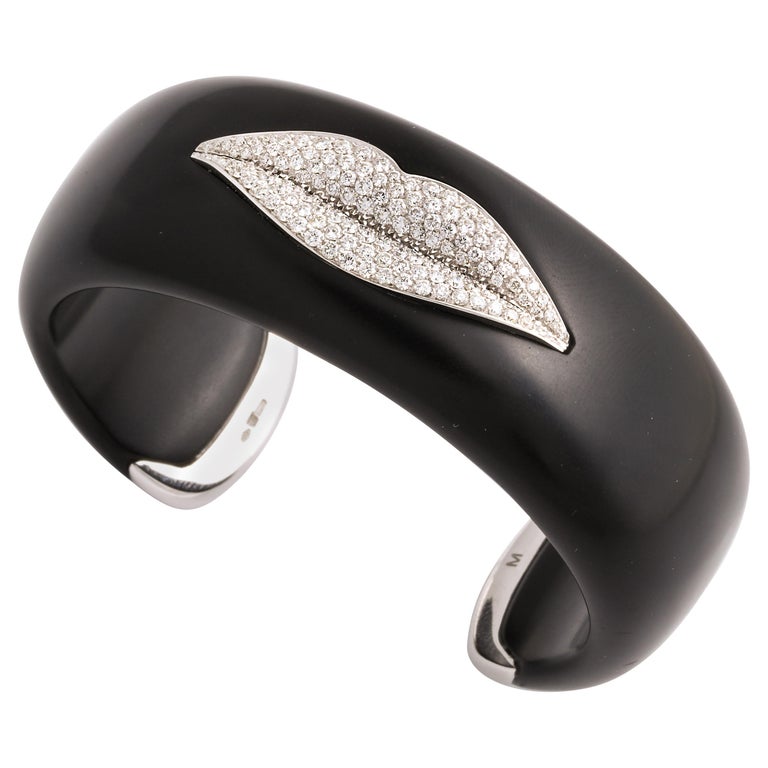 “A whimsical but sexy bangle at a great price point. A wonderful gift idea”