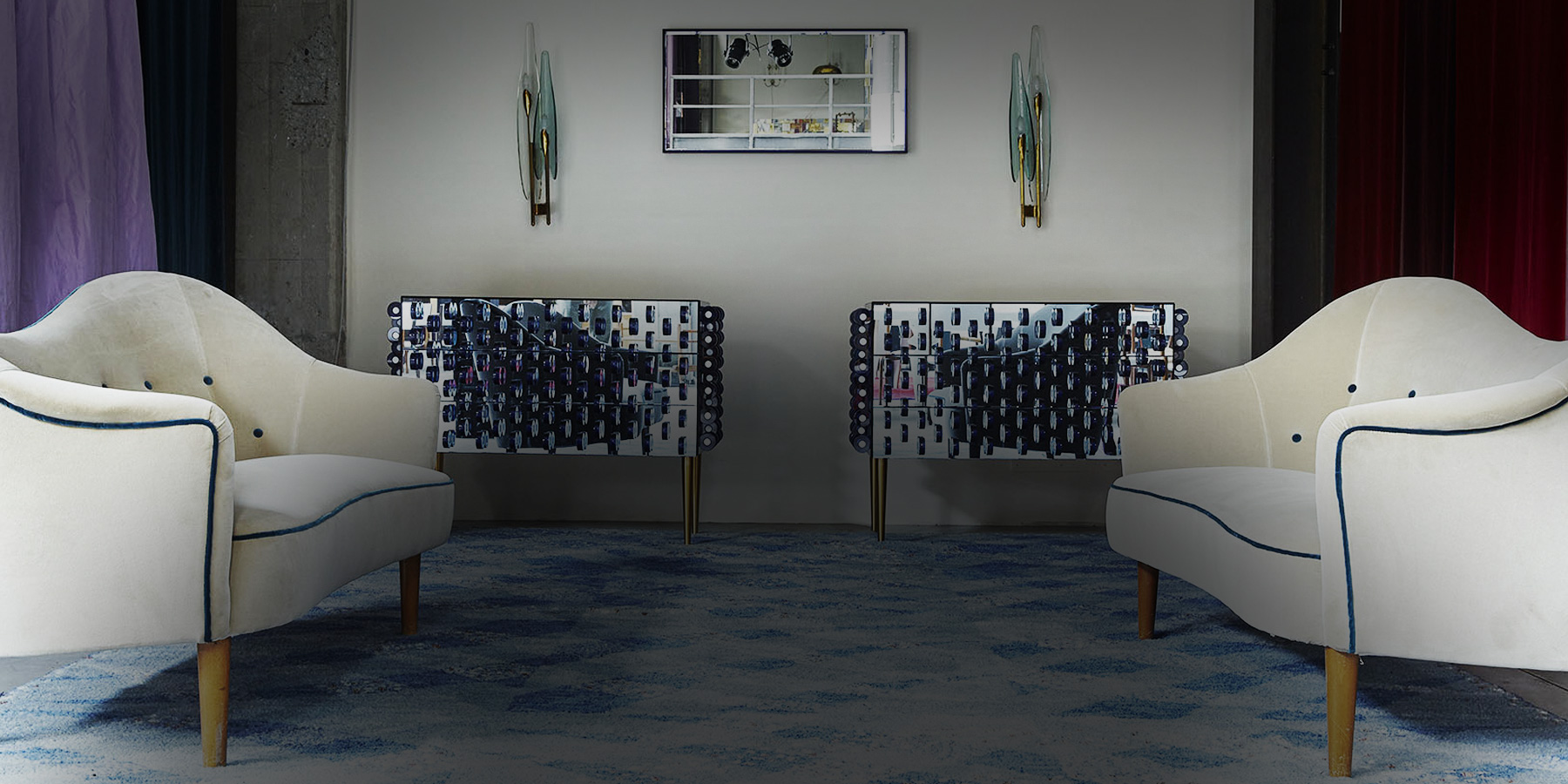 During the Salone del Mobile last spring, Nina Yashar, the founder of Milan's style-setting gallery Nilufar, debuted a dazzling three-level installation in her depot outside the city. Now she's using it to showcase her signature juxtapositions of highly covetable vintage furnishings and contemporary commissions. 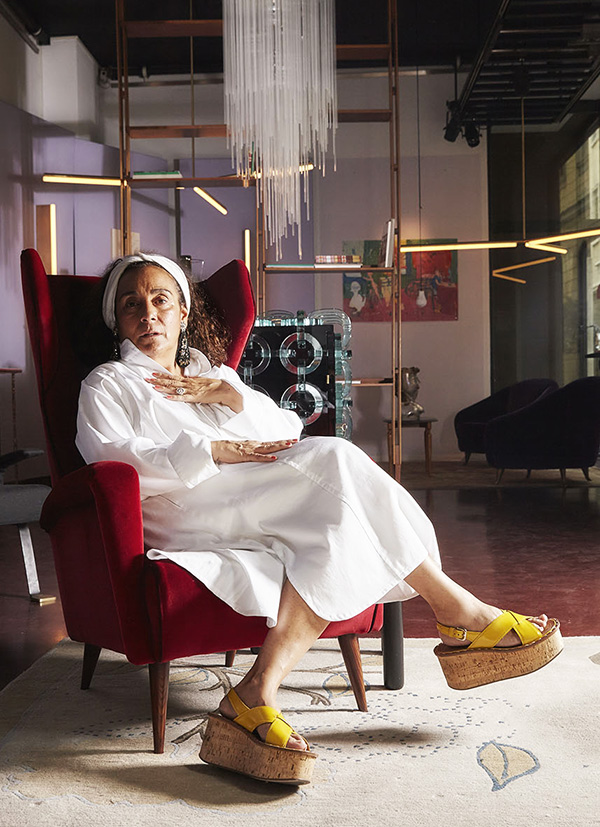 The chic Milan showroom Nilufar on Via Della Spiga has long been the go-to shopping destination for collectors of cutting-edge and historical Italian design. This April, during the 54th annual Salone Internazionale del Mobile, Nilufar’s founder and owner, Nina Yashar, opened the doors of Nilufar Depot, her 5,000-square-foot warehouse on the outskirts of Milan. According to Yashar, the impressive industrial space, which had been used solely for storage, was only intended to remain open for the week of Salone. “But since I did this installation, everyone is saying it’s impossible to use this as just a warehouse,” Yashar says. “Now I am freaking out.”

Designed by the charismatic Massimiliano Locatelli of CLS Architecti, the Depot’s interior references Milan’s opera house, Il Teatro alla Scala: Locatelli created a three-story, gridded-steel structure, inspired by the famous stage, to display furniture vignettes. For the debut installation, the imposing space was artistically arranged, featuring juxtapositions of vintage pieces with contemporary lighting and furniture commissioned exclusively for Nilufar by an international roster of talent including Lindsey Adelman, Michael Anastassiades, Nir Meiri, Bethan Laura Wood, Vibeke Fonnesberg Schmidt, David/Nicolas, Roberto Giulio Rida and Osanna Visconti di Modrone, to name a few. (Pieces by several of these major contemporary names, as well as those by icons of the 20th century, will join Yashar in Berkeley Square next week for the PAD London art and design fair, which runs from October 14 to 18.)

Yashar’s eclectic taste is linked to early memories of her childhood home in Iran, where she was surrounded by carpets in faded patterns and striking furniture by French interior designer Jean Royère. In 1963, the then-six-year-old Yashar moved with her parents from their native Tehran to Milan. Her father, who was in the rug trade, taught her about the world of antique carpets when she was still young, and she spent her early adulthood selling rugs. Her curiosity soon took hold, and she began traveling, starting in Stockholm, where she not only bought carpets by Märta Måås-Fjetterström and Barbro Nilsson but also furniture by such Scandinavian masters as Arne Jacobsen, Hans J. Wegner and Alvar Aalto. Slowly, she became enamored with design, eventually expanding her collection to include examples of French and American design from the 1950s through the ’70s. 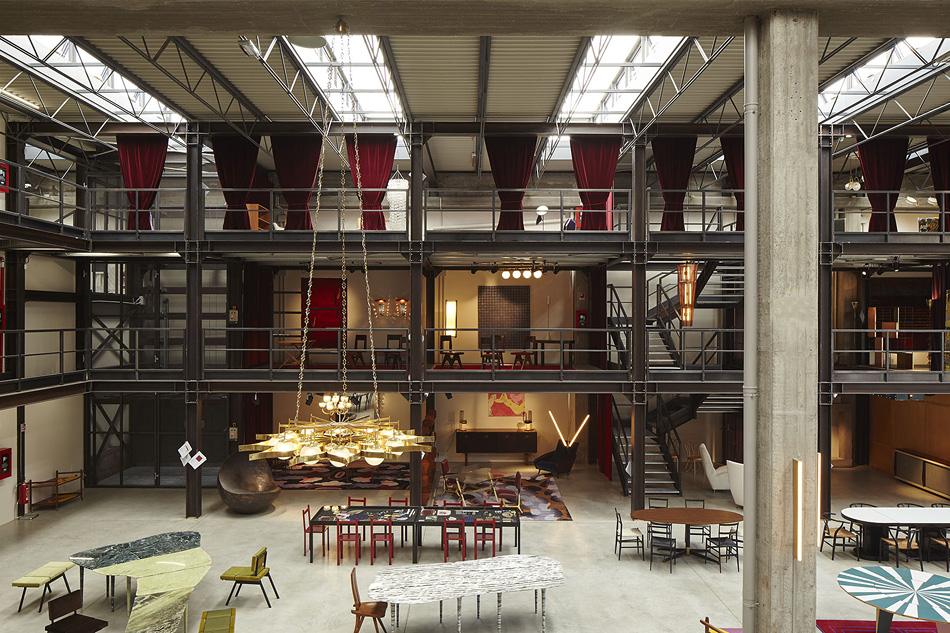 In the Nilufar Depot’s triple-height, industrial space, a Giò Ponti chandelier for Arredoluce from the early ’60s hangs over tables by Martino Gamper and by Massimiliano Locatelli, the designer of the new de facto gallery. 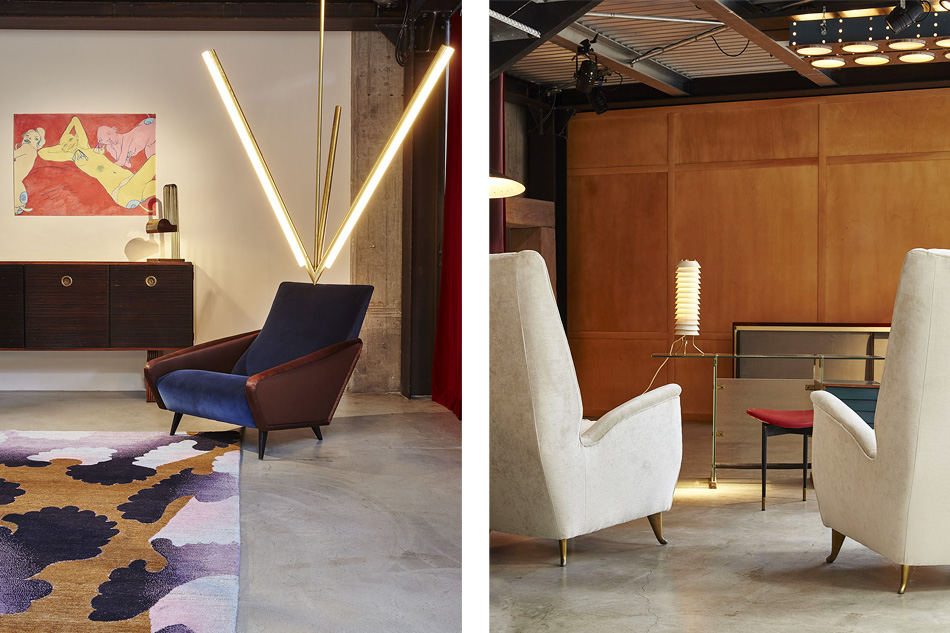 Left: Michael Anastassiades’s Pendant Light 2 from his Lit Lines Collection sits above Ponti’s Distex armchair, 1953, manufactured by Cassina. A Paolo Buffa sideboard, 1930, stands at the side. Right: In front of a pair of 1945 Ponti chairs — part of a set that includes a sofa — Ilmari Tapiovaara’s Mija the Bee table lamp, 1956, rests atop a table. 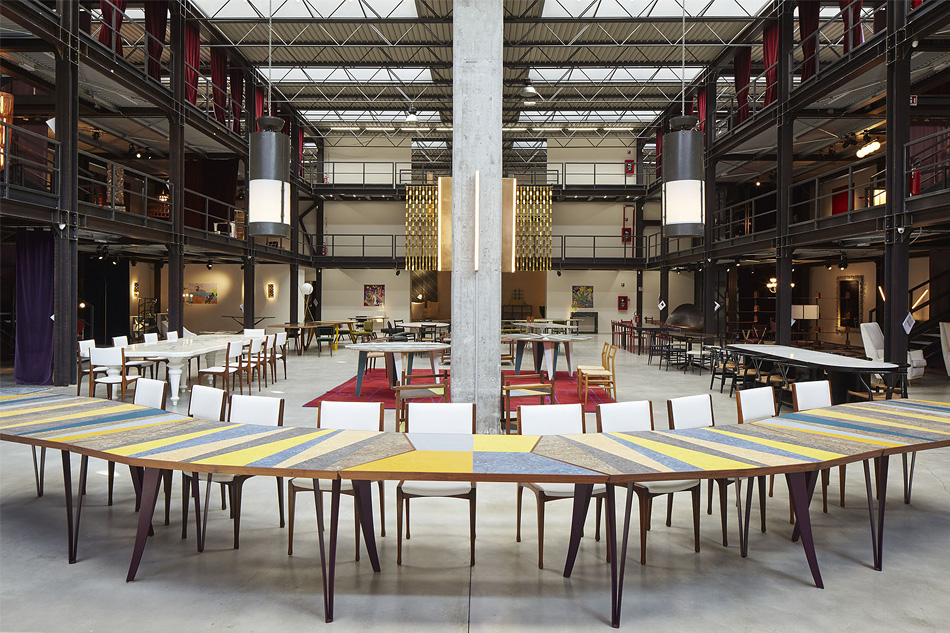 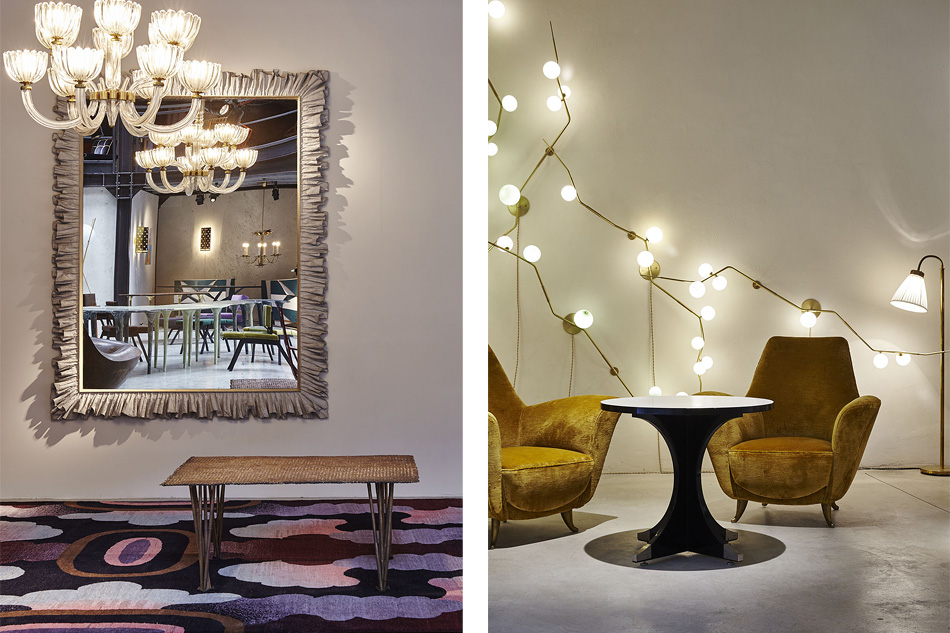 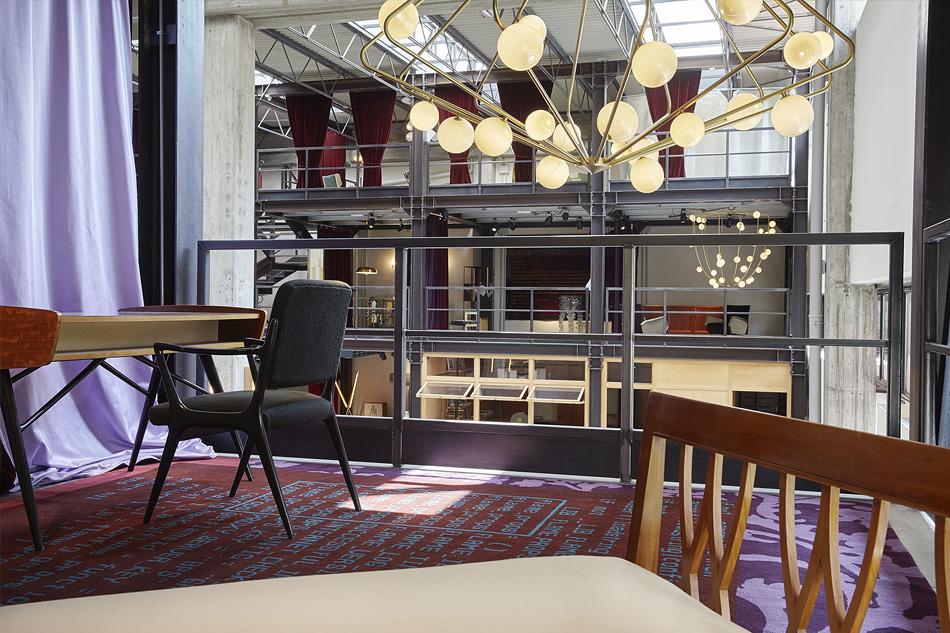 Further recent lighting pieces by Adelman, in this case chandeliers, can be seen with a desk and chair by Alfred Hendrickx from 1958 and the end of a 1940s day bed by Guglielmo Ulrich. 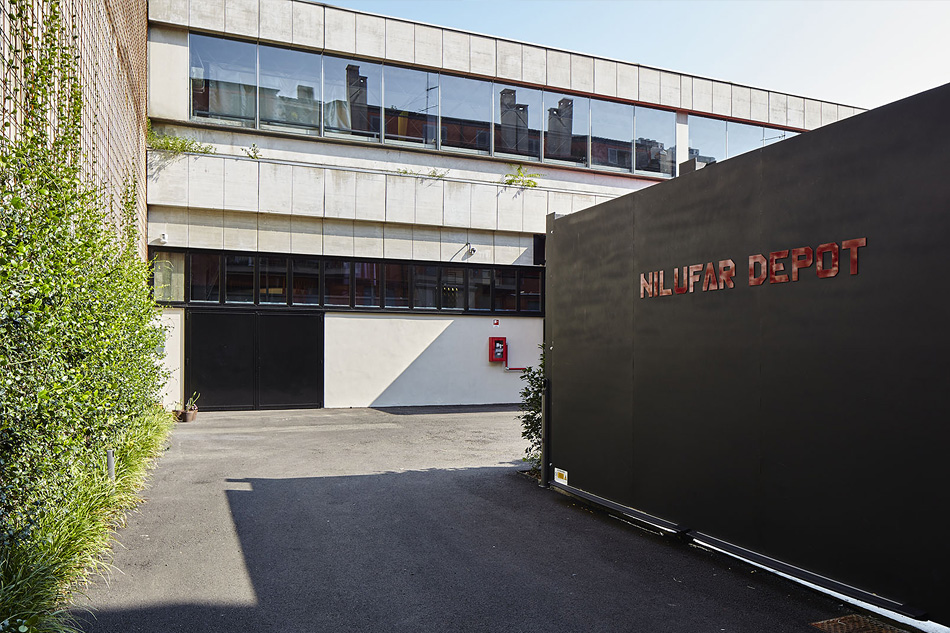 Initially intended as gallery storage, the Depot sits in a 5,000-square-foot former warehouse on the outskirts of Milan. Local architect Massimiliano Locatelli converted it into a pop-up Nilufar exhibition space in time for the city’s Salone Internazionale del Mobile this past spring, and it has become an unintended but no less vital permanent piece of the Nilufar experience since then.

The impressive industrial space that is Nilufar Depot was the gallery’s storage facility and only intended to remain open for the week of Salone. “But since I did this installation, everyone is saying it’s impossible to use this as just a warehouse,” Yashar says. “Now I am freaking out.” 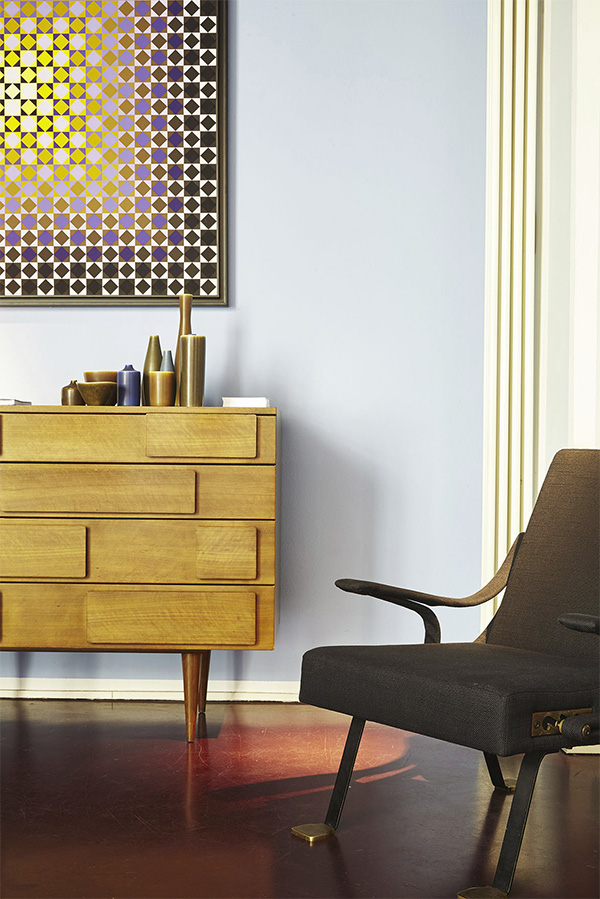 Ignazio Gardella’s tilting Di Gamma armchair, 1956, pairs with Ponti’s Model 2161 cabinet from the first half of the 1950s.

Yashar finally settled back down in Milan, opening the original outpost of Nilufar in 1979 on Via Bigli in the center of Milan, before relocating to a three-story showroom on the cobblestoned Via della Spiga, in the Quadrilatero della Moda, the central fashion district of Milan. Her early exhibits were focused on kilims, Aubussons and Tibetan rugs, but Yashar eventually added furniture and decor into the mix. In 2007, she discovered the work of then-unknown Italian designer Martino Gamper when he staged the London exhibition “100 Chairs, 100 Days.” The dealer was so taken with Gamper’s transformation of discarded chairs into 100 new forms that she purchased the entire show, deciding then and there that she would represent the designer. His latest installation, a series of tables crafted from linoleum, blackboard and metal, all in fluid, curving yet unexpected shapes, were made in an edition for the Depot’s Salone-week opening.

Today, Nilufar represents many iconic names associated with the history of Italian design, from Giò Ponti and Franco Albini to Piero Fornasetti, Carlo Mollino and Ico Parisi. Yashar’s eclectic taste has attracted an international clientele that includes such celebrated decorators as Ilse Crawford, Sarah Story, Jacques Grange, India Mahdavi and Isabelle Stanislas, all of whom travel to Milan to shop.

Yashar recently spoke with Introspective about her views on the modern and contemporary design market and the art of her mix.

What is the most unusual item you’ve purchased or sold?

I recently bought three historical chandeliers from the late 1950s through early ’60s of Giò Ponti. They were from the original Hotel Principe Sorrento Hotel, manufactured by Arredoluce. There is a pair and a large single one, made of brass and opaline glass. If I sold the chandeliers, I would miss them. They look so good in the space.

What are the trends you’re currently seeing in the market?

People ask me for the Italians, like Ponti, Albini, Parisi and Gardella. Italian design is getting recognized and is very important internationally, as you can see in the auction houses. Unfortunately, Italian dealers didn’t defend their patrimony, so it’s the American and French who have established the period. 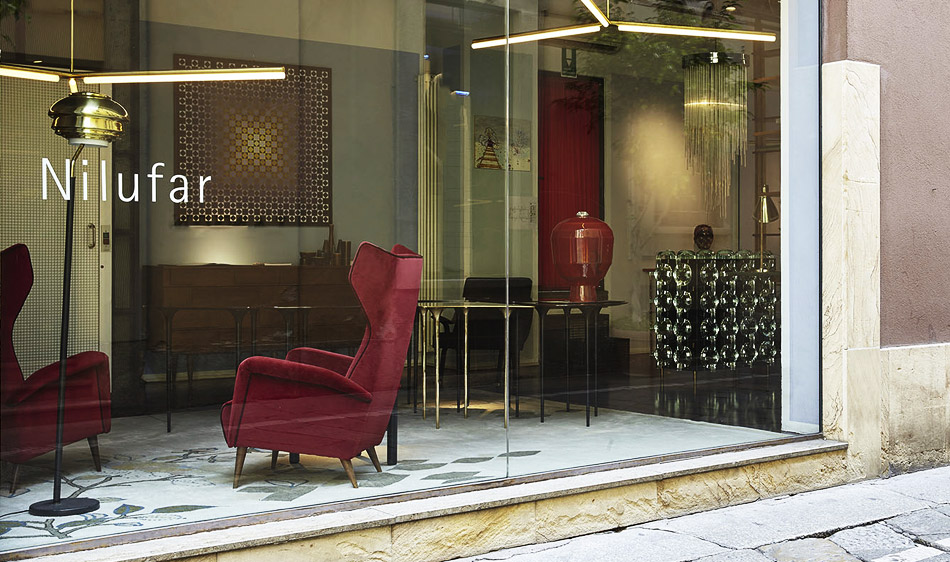 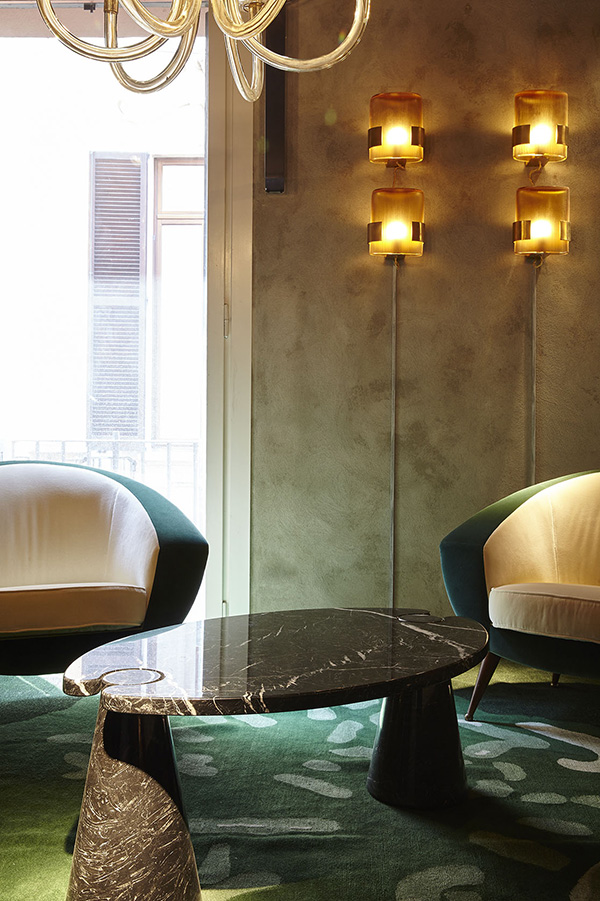 What attracts you to collecting and commissioning contemporary design?

It is the uniqueness of each item and the impact of every project that affects the choices I make, without strict or stable criteria.

What is it you find interesting about the mix between historical works of Italian design by the likes of Ponti and contemporary work by younger makers including Bethan Laura Wood?

Eclecticism is the key for the creation of a physical harmony that I create from a combination of historical and contemporary design: Every piece is unique, and its value is enriched by the conversation with other items from other periods.

What would you tell your customers, when giving them instructions on caring for their pieces?

Beeswax is good for wood, but it’s also good for iron. We use a natural product called Ambra Solida — or Solid Amber Wax — which is made by Ambrosoli and is generated from leftover wax from the honey harvest.

Nina Yashar of Nilufar shares her thoughts on a few choice pieces. 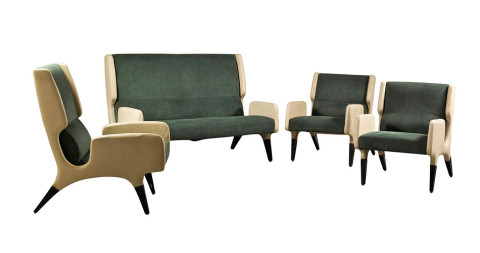 “This set was inside the Hotel Parco dei Principi in Sorrento, which was completely furnished by the master Ponti. I am fond of it because it was part of the collection whose other pieces of furniture were later reused by Martino Gamper for one of the most important projects of his life.” 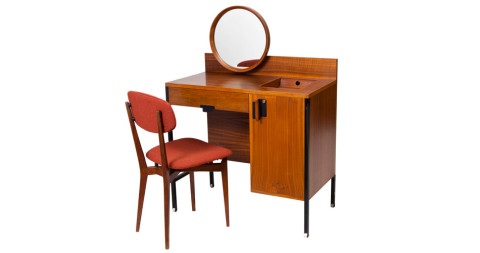 “A vanity table should be present in every home. It’s an iconic and elegant piece, and this one in particular is extremely sophisticated.” 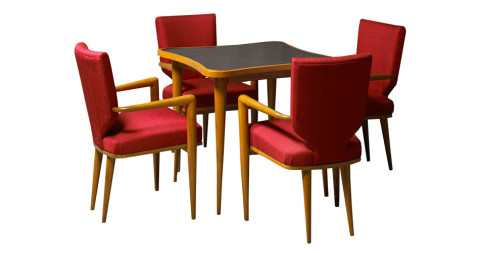 “This set is truly unique and original. It was part of the furniture belonging to a collector who asked Jean Royère to design his whole house in Beirut.” 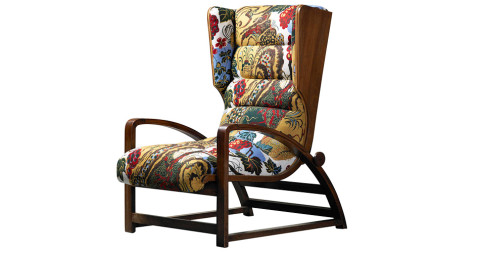 “I love this piece because it is unique, created by three icons of design history and enriched by an original fabric by Josef Frank.” 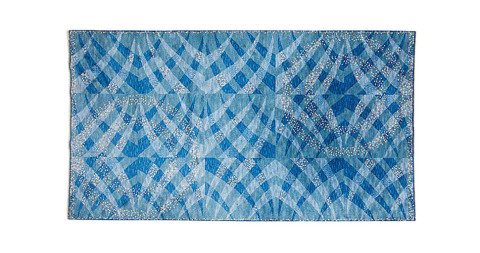 “This carpet brings me back to my roots. I’ve always had a great passion for carpets and rugs, and for the Scandanavian ones in particular.” 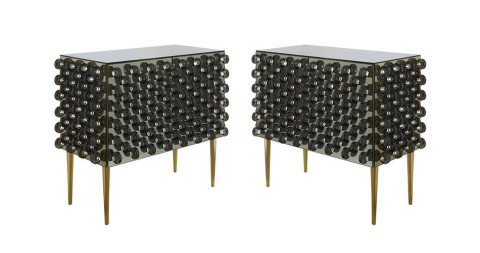 “I love the creations by Rida because they are a wonderful example of the combination of vintage and contemporary design.”