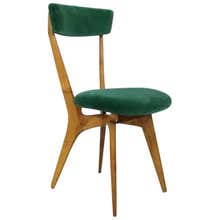 The Italian architect, artist and furniture designer Ico Parisi (1916–96) and his wife and frequent collaborator, Luisa Parisi (1914–90), formed one of the most prolific and spirited European design teams of the postwar period. Together they created a magnetic aesthetic that combines the refined angularity and elegance of the work of Gio Ponti with the liveliness and lightness of the furniture of Carlo Mollino.

Ico Parisi — his first name is short for Domenico — was born and raised in Palermo. He moved to the northern Italian city of Como in the early 1930s and lived and worked there the remainder of his life. He initially studied and worked as a civil engineer, but later became an associate in the office of architect Giuseppe Terragni, a leading light of the stern and formal Rationalist design movement. Ico moved in artistic circles that included Lucio Fontana and Bruno Munari; after he married Luisa Aiani — a former student of Gio Ponti’s — in 1947 their design studio became known as an artists’ salon. The couple’s big break as designers came the following year when their work was shown, along with that of Carlo Mollino, Paolo Buffa, Franco Albini and other greats, leading to contracts with manufacturers such as Cassina and Singer & Sons.

What attracted these firms was the Parisis’ fluency with a wide array of furniture forms. No two looks are quite alike. Their body of work includes a series of coffee and dining tables and consoles for Singer & Sons created in the early 1950s that feature notch-edged tops and javelin-shaped legs, and cabinets and credenzas such as those with plain fronts and molded-teak and plywood detailing for MIM Rome (1959). Their chairs range from sleek dining pieces with supple, bone-shaped backrests for Singer & Sons to the lush Model 813 Uovo, or Egg chair, for Cassina (1951). Then, as now, Parisi furnishings can fill an entire decor, yet seem eclectic and at the height of style.

Rosewood Desk by Ico Luisa Parisi for M.I.M. Roma, 1960s
By Ico & Luisa Parisi
Located in Montelabbate, PU
Executive desk in rosewood with top connected with polished aluminum corner fittings to the legs in black painted steel. The desk is solid is fully functional, the chest of drawers a...
Category

Luisa Parisi & Ico furniture are available for sale on 1stDibs. These distinctive objects are often made of wood and designed with extraordinary care. There are many options to choose from in our collection of Ico & Luisa Parisi furniture, although brown editions of this piece are particularly popular. We stock 14 vintage versions of these items, while there is 0 modern edition to choose from as well. Many of the original furniture by Ico & Luisa Parisi were created in Europe during the 20th century in the Mid-Century Modern style. Many customers also consider furniture by Marzio Cecchi, Silvio Coppola and Vittorio Introini if you’re looking for additional options. Prices for Luisa Parisi & Ico furniture can vary depending on size, time period and other attributes. The price for these items starts at $2,821 and tops out at $30,000, while pieces like these can sell for $6,601. 1stDibs.com

$5,673 / set
Ico Parisi Attributed Vanity Table in Beech, Italy, 1955
By Ico Parisi
Located in Roosendaal, Noord Brabant
Very nice and elegant vanity table attributed by Ico Parisi and manufactured by Vittorio Dassi, Italy 1955. The vanity table is made of solid beech wood and has a very nice typical I...
Category

$1,295
Oak dressing table
Located in Roncadelle, BS
Small oak desk with mirror. Features long tapered legs and three drawers with wooden handles. The small size makes it perfect for placing in the bedroom as well with the dual functio...
Category

$571
English Mahogany Dressing Table
Located in Wilson, NC
This dressing table has shaped convex corners. The top lifts up to expose working compartments lined with fabric over paper of which the back two have lids. There is a solid mahogany...
Category