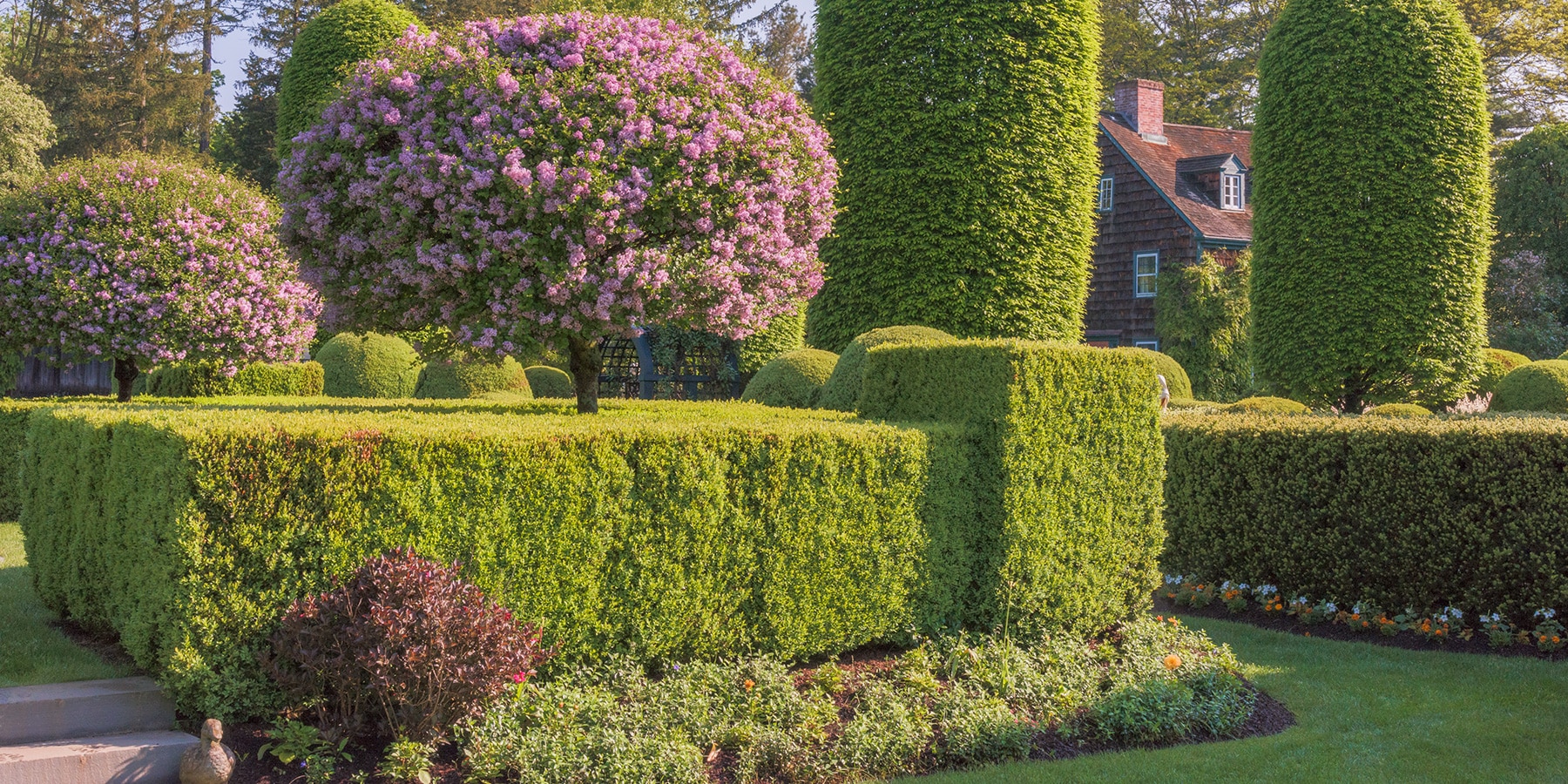 The photographer, known for his elegant depictions of buildings and modern dancers, turns his lens on a sprawling green space. 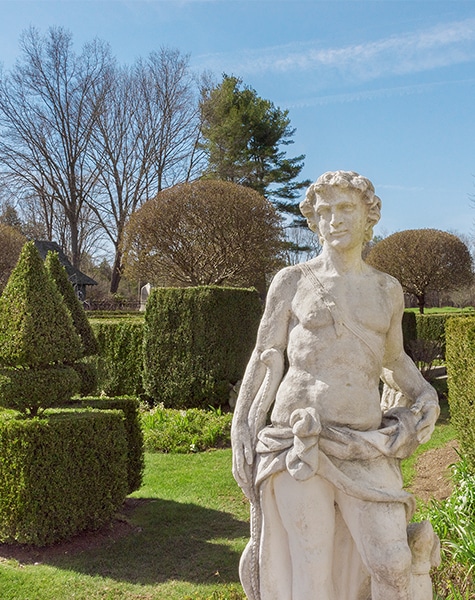 Philip Trager, long known for his evocative black-and-white portraits of iconic buildings and sinuous dancers, switches to color for his new book, Birdsong, which captures an immense garden on a private estate in Connecticut. In Plate 1, a Greek-style statue takes center stage. Top: Plate 5 from the book. All photos © Philip Trager

For years, Philip Trager worked 50-hour weeks at his suburban law office while also building a career as a fine-art photographer. A New York Times article from 1978 described his weekend jaunts around Connecticut with a large-format camera and his family in tow. “It was gutsy, but my wife, Ina, was behind me,” Trager recently said of his career change. He now has 13 books to his credit and images in the collections of major museums. Among his most frequent subjects are buildings; the art critic Peter Schjeldahl, reviewing Trager’s 1985 volume on Palladian Villas, called his “place-portraiture [as] beautiful as any photographs I have ever seen.” He has also frequently turned his lens on dancers.

A couple of years ago, Ina Trager helped her husband make another professional transition: After decades of working almost entirely in black and white, producing silver-gelatin prints in his darkroom, Trager switched to color so he could shoot his wife in brightly hued outfits. The result, a book titled simply Photographing Ina, was published in 2016.

By then, he says, “I was immersed in color.” That prepared him for his next venture, a stunning volume depicting an estate in Connecticut named Birdsong. The book — also called Birdsong (Laru Associates) — contains exactly 119 photos, one to a page, numbered but untitled (and, sadly, uncaptioned). Within those 119 rectangular fields, Trager captures an astonishing variety of natural beauty, as well as the contrivances with which man attempts to tame it, heighten it and protect it. 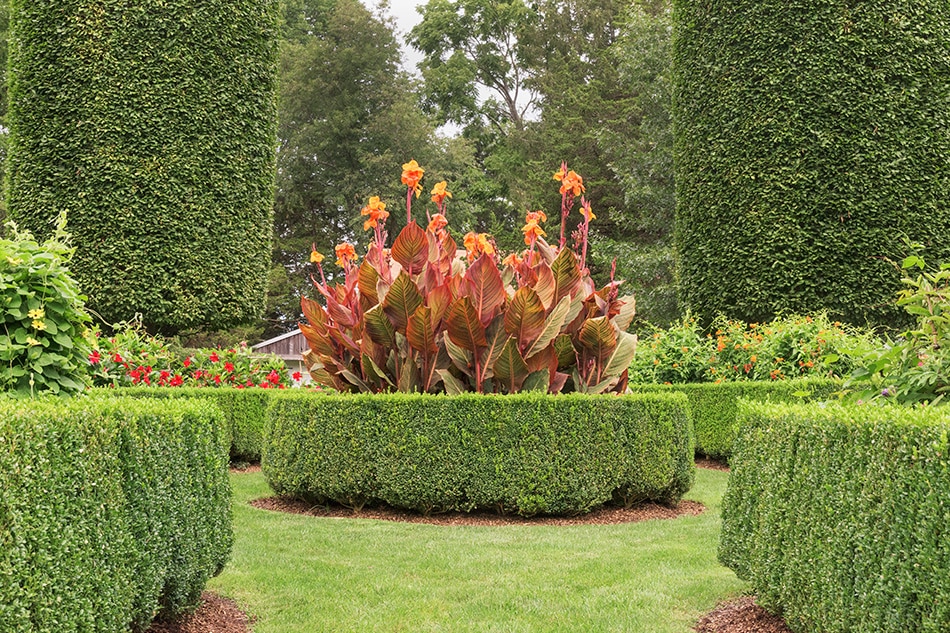 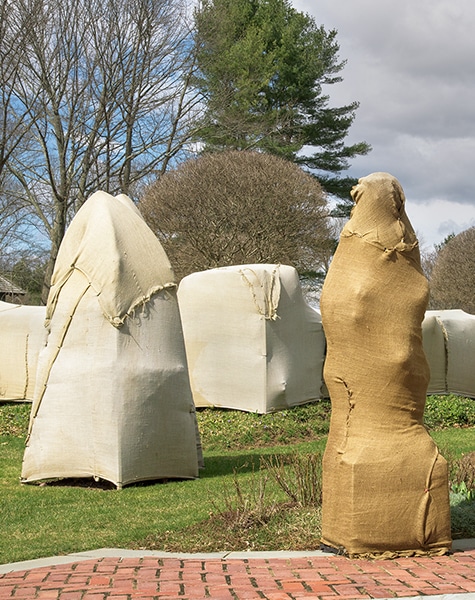 Trager had a lot to work with. Russell Fuchs, the Manhattan businessman who owns Birdsong and proposed the book, spent decades turning the estate into an 18-acre encyclopedia of garden design. As Fuchs recounts in the volume, “There’s an English garden, a French garden, a bamboo garden, various rock gardens, a zinnia garden, a knot garden, a water garden, conifer garden, a wildflower garden, a river birch allée, an herb garden” and so on — each following his exacting specifications. The checkerboard garden, for example, is made up of 48 squares, each four feet by four feet, half planted with begonias and half with grass. “Not a blade of grass or flower of begonia leans into another square,” Fuchs writes.

Trager had photographed gardens once before, for a collaborative book on Wave Hill, in Riverdale, New York, and he didn’t expect to take on the subject again. “It is hard to make garden photographs distinctive,” he says. But after a four-hour tour of Fuchs’s plantings he began thinking that maybe he could take “photographs I could live with.” He accepted the commission in part to capture Birdsong for posterity. After Fuchs and his wife, Lauren, are gone, Trager says, “there may be no one to maintain these gardens.” He noted, however, that “if someone came to me tomorrow and said, ‘Would you photograph another garden?’ I probably wouldn’t be interested.”

Trager was interested enough in Birdsong to photograph it for an entire year, often visiting three or four times a week, using a handheld Nikon D810 (“high-end but not the really high-end”). At 83, he knows a little bit about the seasons, but he came away with newfound respect for how light changes over the course of a year. In winter, he says, “there are unusual colors in the sky — a wonderful blue and a little bit of a pink.” Plus, “with the sun low in the sky, the lighting can be more dramatic. And the shadows are longer.” Trager makes artful use of shadows: In one shot, of flowering shrubs alongside a pergola, he is seen in shadow aiming his camera — and adding a bit of mystery to the resulting shot. 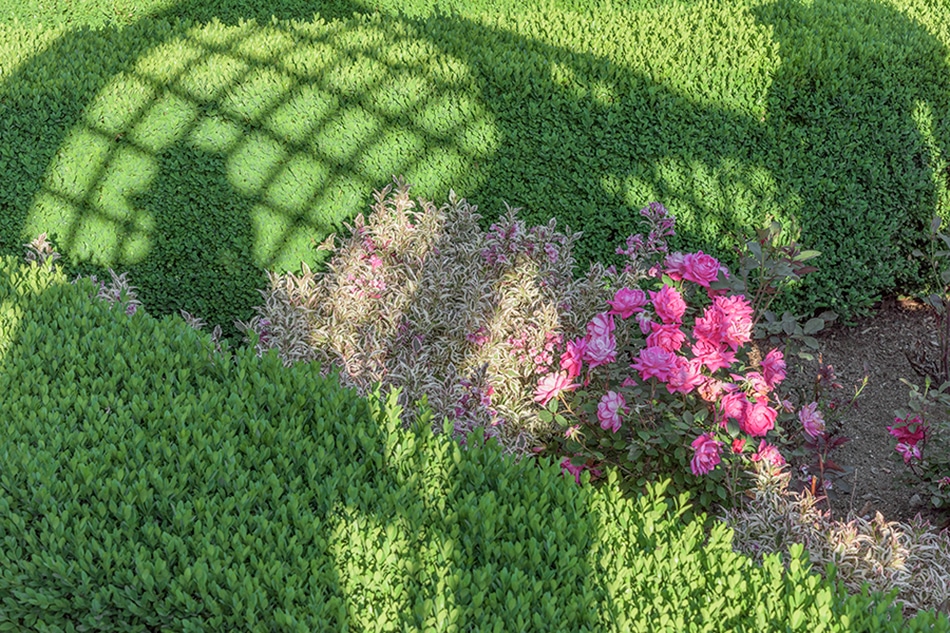 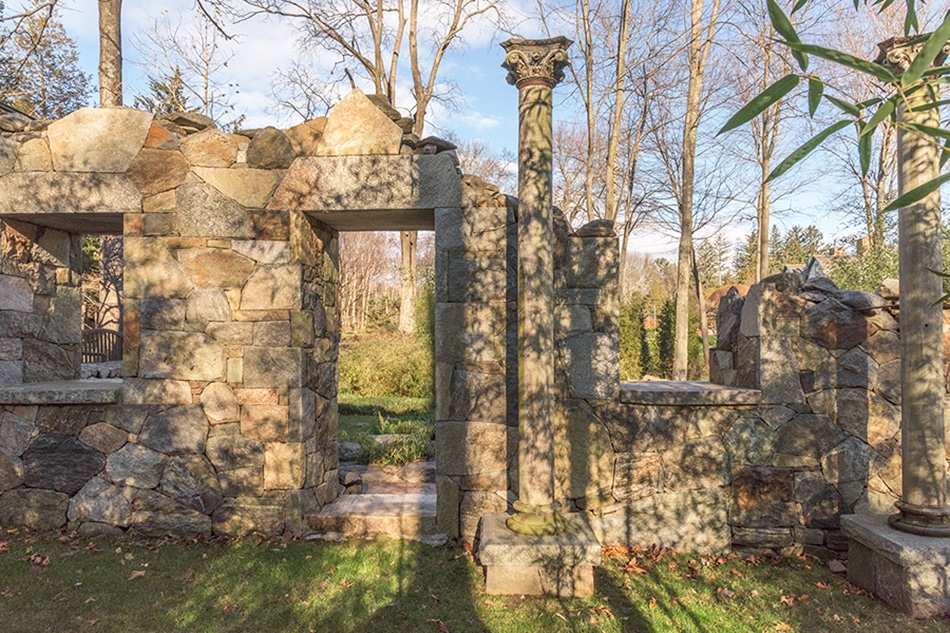 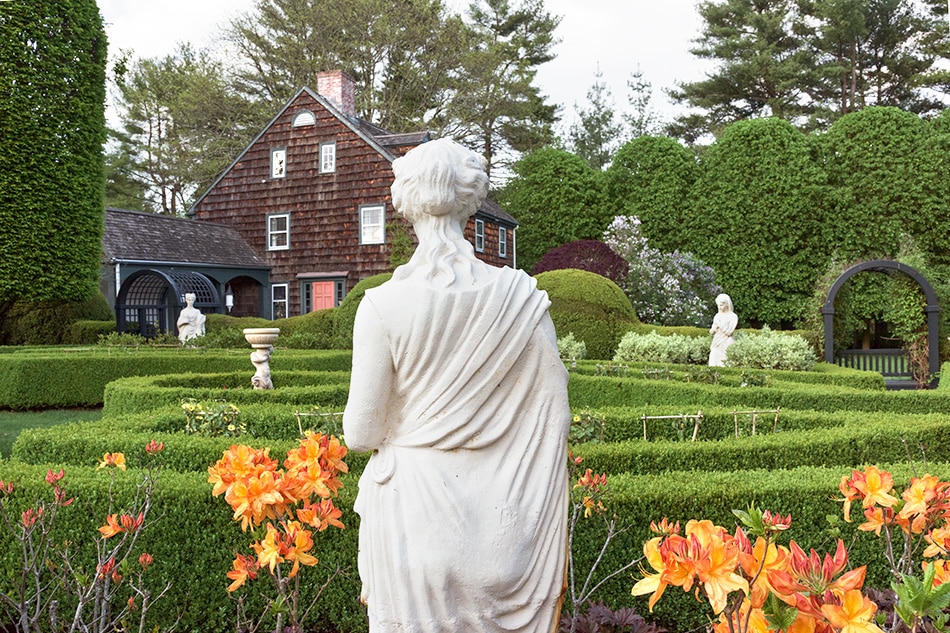 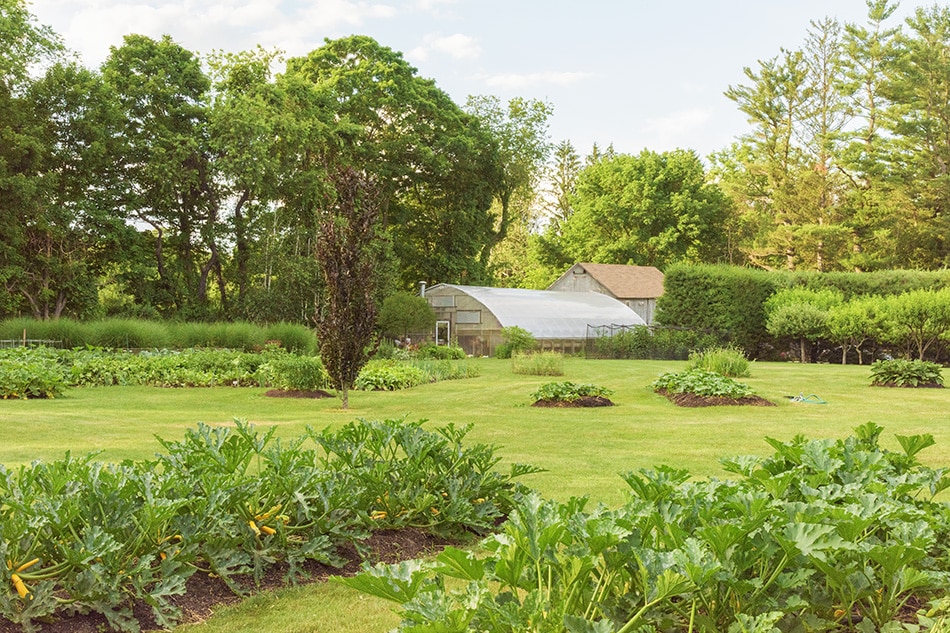 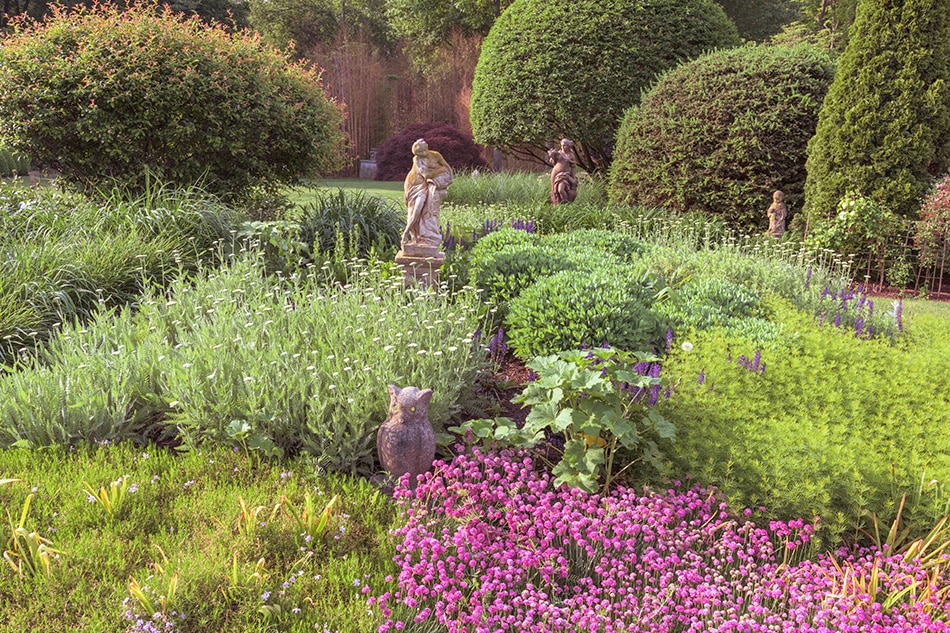 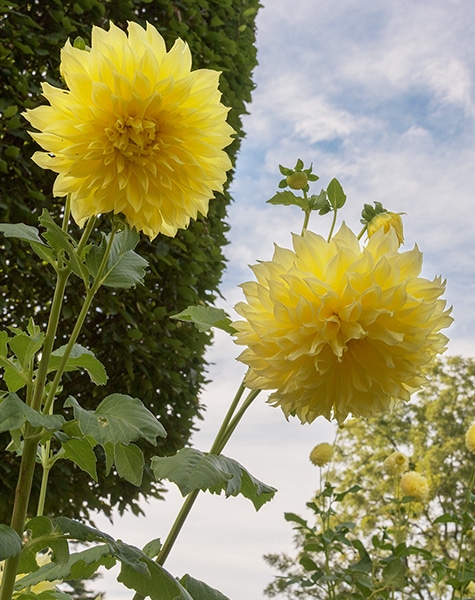 Winter also gave him the chance to photograph shrubs under burlap wrap, resulting in images that are vaguely surreal and utterly compelling. Almost as surreal are the images of statuary arranged like guests at a backyard soiree. Fuchs is throwing a giant lawn party, and Trager is the party photographer.

The easiest season to shoot, Trager suggests, may be summer, when light is strong and colors bright. (In one such shot, the begonias in the checkerboard garden are at full intensity, as are the dahlias in another shot.) But with trees and shrubs at their fullest, he says, “it’s hard to see sometimes beyond what you’re looking at.” By contrast, in fall and spring, “there’s a lot of filigree,” allowing for more-layered compositions.

Trager chose, sequenced and sized the photos in the book, looking for correspondences but avoiding repetition. He also worked on the images’ colors, always with the goal, he says, of trying “to get things to what I remember them to be.” Color correction took place on computer screens, on digital prints and, finally, on printer’s proofs. (The book was printed in Verona, Italy.) Trager lauds the results, saying, in regard to the flowers in the book — like the hibiscus in one of the summer shots — “you can practically touch them. It’s the combination of the inks.”

Birdsong (the estate) may be overkill. There is now “too much to see, feel, smell,” Fuchs admits in his essay, going on to elegize, “In one place in the garden, the age of vitality; in another place, or another time, the sadness of life slowly leaving and the sadness of grieving the loss.” Trager captures all that between hard covers, yet Birdsong (the book) never feels excessive.