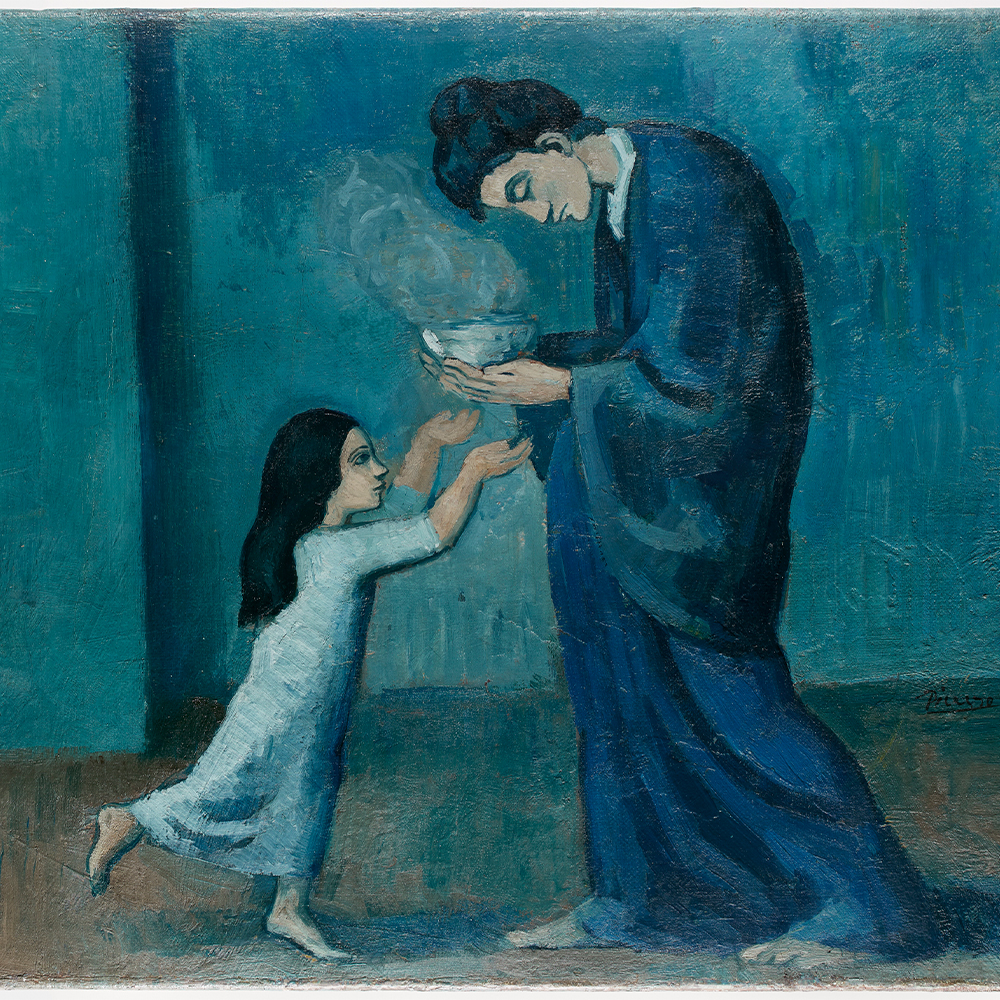 April 24, 2022During the early years of the 20th century, Pablo Picasso had an ambitious agenda. He was figuring out how and what to paint, drawing on a variety of influences and painting new pictures on top of old ones. Meanwhile, he was broke.

“Picasso: Painting the Blue Period,” on view through June 12 at the Phillips Collection, in Washington, D.C., traces the fast track the young Turk took to become an acclaimed artist. Born in Spain in 1881, Picasso was creating masterpieces before he turned 25. By 1900, the year of the earliest work in the show, he was already considered a talented painter. By the time he created the pictures displayed in the last gallery, which include the mesmerizing Lady with a Fan (1905), he had emerged as an artist with few peers.

During Picasso’s first sojourn in Paris, in 1900 — he visited the City of Light several times before settling there, in 1904 — he portrayed music hall and cabaret denizens, both the performers and the men attracted to them. In rapid succession, he depicted a range of types, including prostitutes, mothers and children, women reminiscent of devotional images, figures standing beside the sea and full-length nudes.

“The theme of the mother and child, which we see appear in Picasso’s work as early as nineteen hundred, becomes a lifelong subject for the artist,” says Susan Behrends Frank, cocurator of the Phillips exhibition. “Also, the female nude appears in Picasso’s painted work for the first time in 1901 and becomes a recurring subject throughout his career.”

For most of the paintings completed between 1901 and 1904, Picasso stuck to a monochrome palette of blue and blue-green — hence, “The Blue Period.” As for his inspirations, the transplanted Spaniard drew from such popular Impressionists and Postimpressionists as Edgar Degas, Paul Gauguin and Henri de Toulouse-Lautrec.

By displaying dramatic sculptures and melancholic paintings by, respectively, Auguste Rodin and Pierre Puvis de Chavannes alongside relevant Picassos, the Phillips calls attention to artistic forerunners not often associated with the Spanish master’s career. “I never appreciated the breadth and depth of his range of visual interests until working on this project,” Frank says.

Then there is the matter of the large number of works in the show executed on cardboard. To be sure, it cost less to paint on this material than on something more substantial. But it was also practical. Picasso arrived in Paris in May 1901 with only one month in which to create works for a show he was holding at the Vollard Gallery at the end of June. Sometimes, he painted three pictures a day. Pigments dry more quickly on cardboard than on canvas.

The Phillips Collection’s own The Blue Room (1901) encapsulates many key aspects of the works in the exhibition. A svelte nude standing in a basin washing herself is portrayed as if she were a marble statue by Rodin. In the bedroom where this is happening, evocative of Picasso’s 1901 studio, one of his seascapes and a poster by Toulouse-Lautrec, who had recently died, hang on a back wall.

Comparing this scene to a stage set, Frank points out that the rumpled bed and the flowers on a table suggest “a possible visitor the night before. Picasso adds multiple details to assist with our interpretation — the dancing figure in the poster, the zinc tub and pitcher, which are distinctly associated with the brothel, as is the swatch of oriental carpet on the floor. Is it the opening scene of a play when the curtain pulls back or the coda at the end?”

The Blue Room is noteworthy too because an earlier painting, a portrait of a bearded man, lies beneath its thick surface. New technological imaging has revealed that Crouching Beggarwoman (1902) and The Soup (1903), which both belong to the Art Gallery of Ontario in Toronto, where this show first opened, are also painted on top of earlier artworks, executed by Picasso and by another artist. In discrete spaces at the Phillips, videos explain the science behind these discoveries.

Did Picasso paint over previous works because he could not afford new canvas? Or did he possibly feel he could execute “better” pictures? He was, after all, a quick learner, and early in his career, he realized that he could surpass his original concepts.

“Picasso: Painting the Blue Period” also includes drawings as well as two impressions of The Frugal Repast (1904), the artist’s first print. Like other works in the exhibition, this etching was made using recycled materials, in this case a zinc plate that Picasso scraped clean of what was previously there.

John Szoke, a New York gallerist who specializes in the artist’s prints, has nothing but admiration for the way he rendered the haggard couple sitting at a table. “From the get-go, without any training, Picasso could do something of this magnitude,” Szoke marvels. Although the artist produced more than 2,000 prints during his lifetime, the dealer feels this one is “among his ten greatest.”

To see The Frugal Repast as well as many intriguing paintings, visit this exceptional show. If you do, you will see how a young Spanish artist became Pablo Picasso. 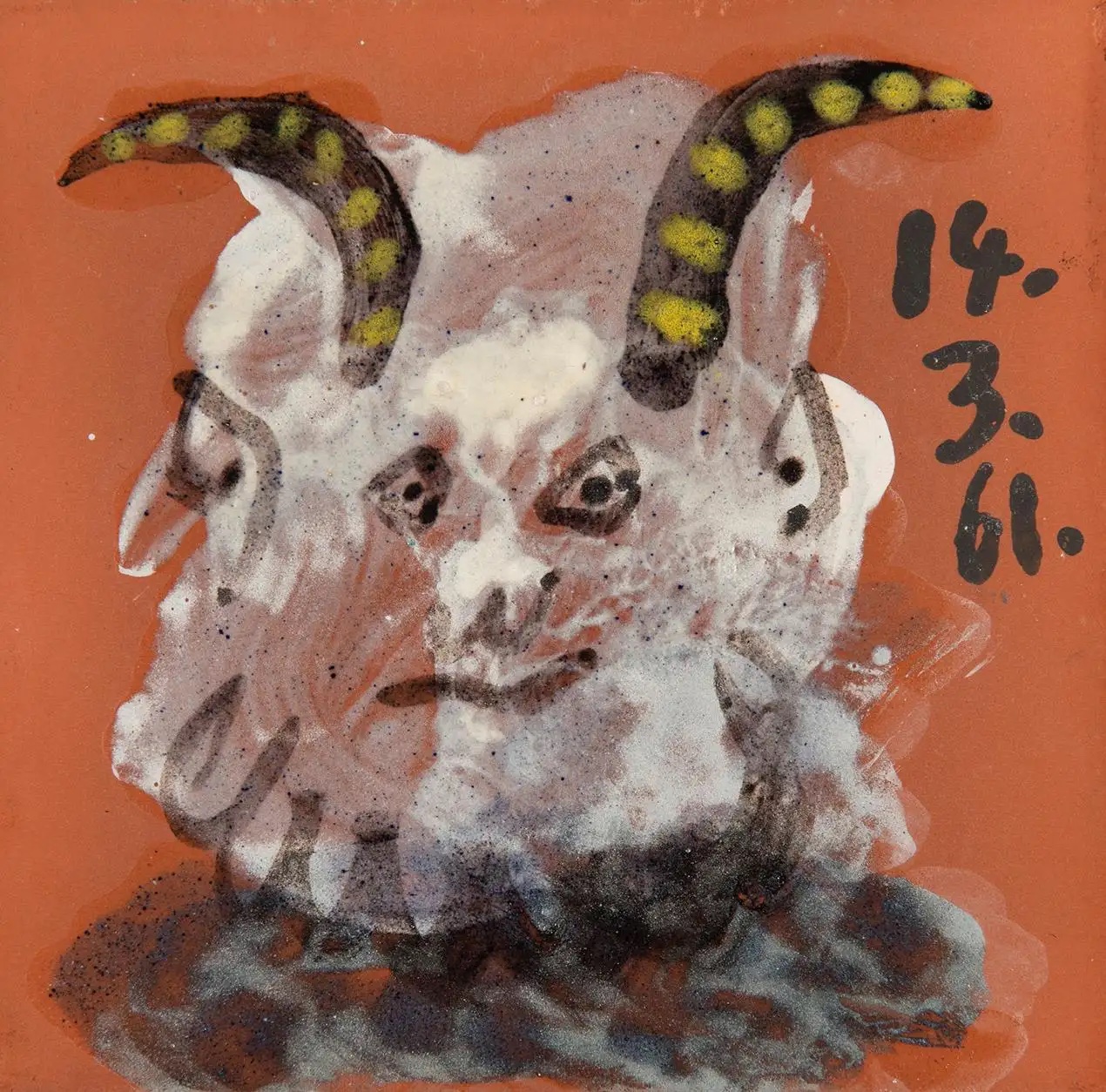