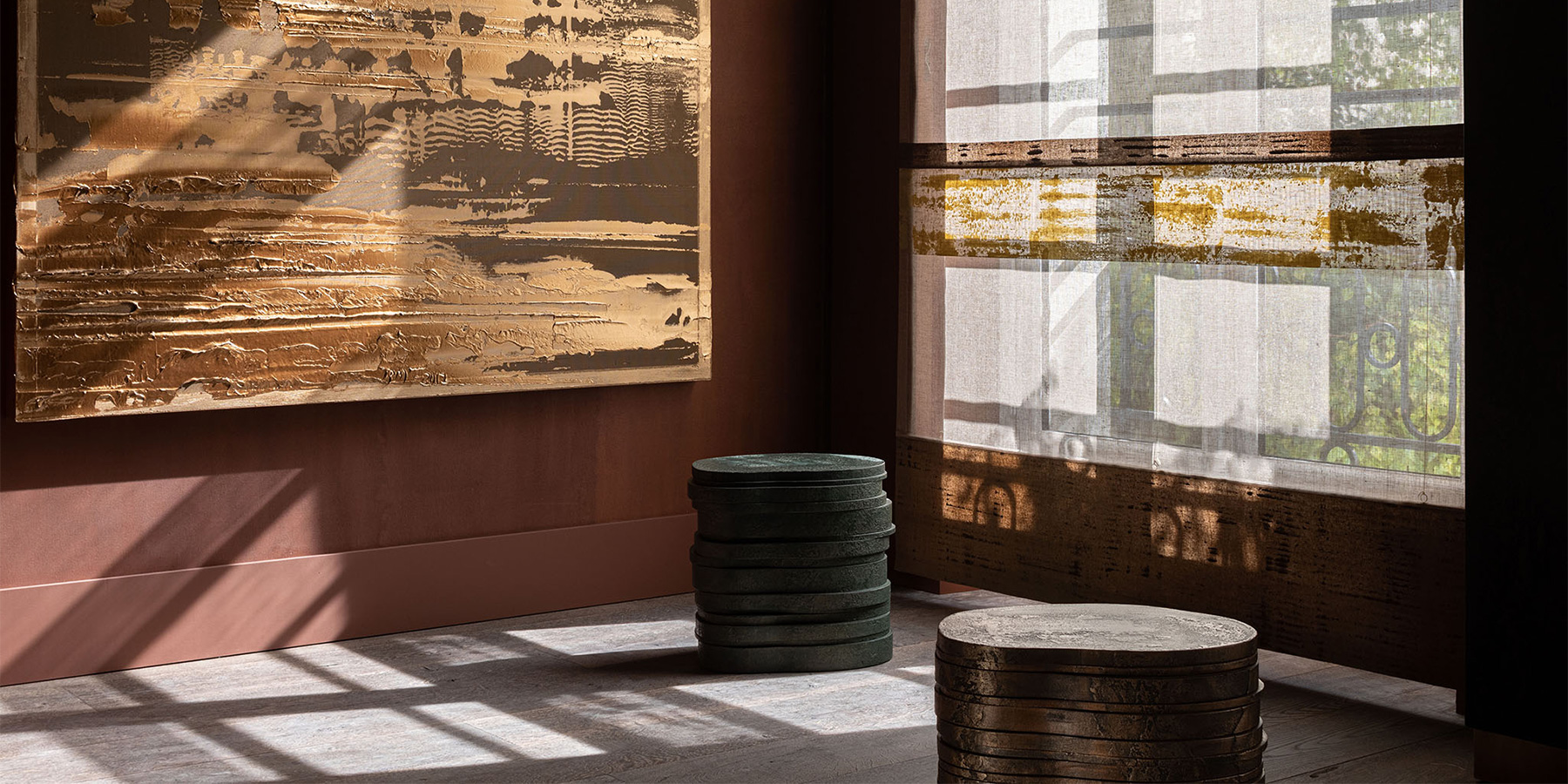 French Creator Pierre Bonnefille Has a Way with Glittering Surfaces

From his studio outside Paris, the artist and designer crafts furnishings, wall panels and entire decor schemes for such illustrious clients as Christian Liaigre, Hermès and Cartier.

Pierre Bonnefille has a fascination with color. In one of his workshops in the sleepy Parisian suburb of Maisons-Alfort is a set of shelves laden with dozens of carefully arranged jars. One is filled with black volcanic sand he brought back from Bali. Another contains Terre Verde Brentonico  — a green pigment that, he explains, was favored by the great Italian architect Andrea Palladio. A third is labeled Rouge de Falün, a brick-red paint used for the facades of houses in Sweden. “It protects against insects,” he explains. 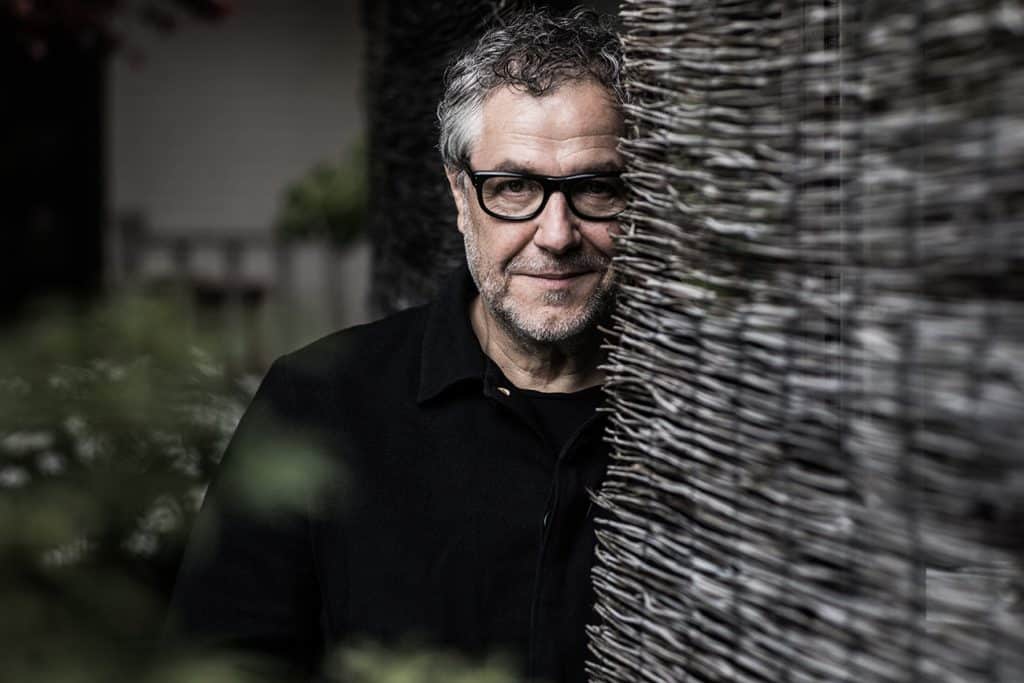 French creator Pierre Bonnefille takes nature as the primary inspiration for the textures and palettes of his wall panels, paintings, furniture, custom murals and finishes. Top: The room Bonnefille decorated for the AD Intérieurs showhouse in Paris last year featured three of his original designs, including an artwork from his “Bronze” series, two stools from his Metamorphosis furniture collection and curtains that evoke fragmented landscapes. Photos by Luca Bonnefille

Bonnefille’s work is as varied as his collection of hues. His website refers to him as an “artist-designer-maître d’art.” He creates rich textural paintings in which the paint seems to ooze across the canvas. “They are both aesthetically wonderful and also very soothing, through what Pierre calls their ‘vibrations,’ ” says Meryl Hadida Shabani, who runs the Los Angeles branch of the Paris gallery L’Eclaireur, which sells his work. He accepts the odd interior design commission, as well, and created a room for last year’s AD Intérieurs showhouse in Paris. In addition, in 2016, he launched his own furniture collection, Metamorphosis, comprising tables, cabinets, credenzas and shelving systems whose angular shapes and metallic textures were inspired by an African copper mineral collection he acquired from an antiques dealer. London’s Charles Burnand Gallery featured one of his consoles along with two of his limited-edition stools at Salon Art + Design, in New York, this past November. “I have always believed that Pierre’s pieces transcend furniture design because of their sculptural nature,” says Simon Stewart, the gallery’s founder and owner. 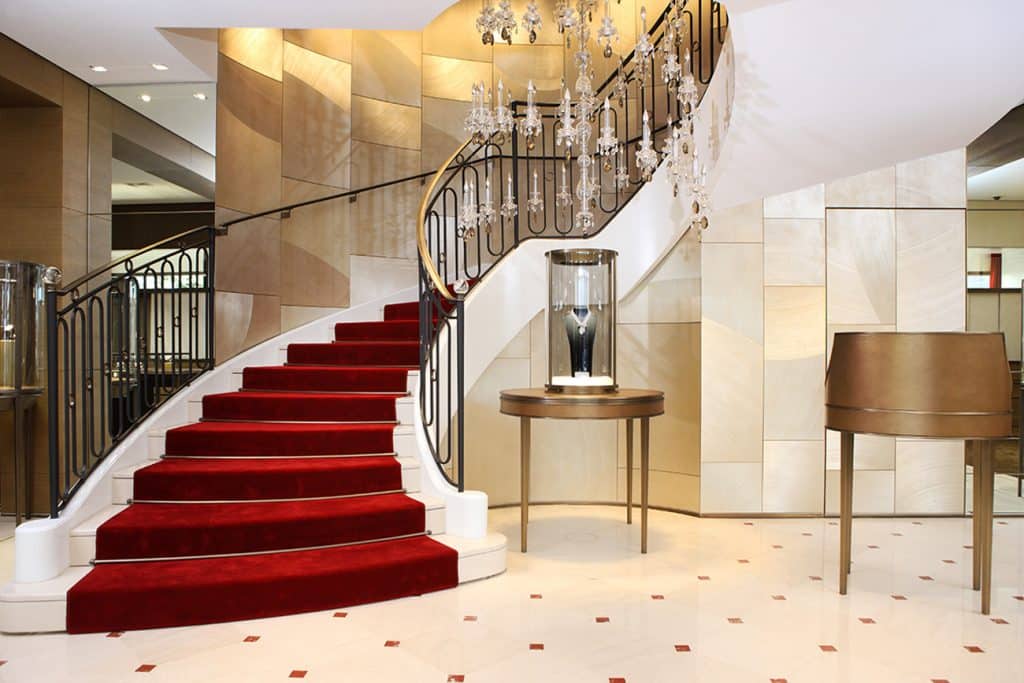 Gold-toned Bonnefille panels line the stairway of the Cartier shop on Rue du Rhône in Geneva, whose interiors were designed by Bruno Moinard. Photo © Jacques-Pépion

Among all these various works, Bonnefille is perhaps best known for his custom murals and finishes, created for clients like Christian Liaigre and luxury brands, such as Hermès and Cartier.

“Pierre is not just an extraordinary colorist. He also has a great sensitivity to touch and creates materials that are at once strong and delicate,” say Denis Montel, director of the Paris-based architecture and design practice RDAI, which oversees the interiors of Hermès boutiques worldwide.

“He is a unique character, who brings to his work finesse and an uncommon savoir-faire with regard to textures, patinas and translucency,” adds French interior designer Bruno Moinard, who has designed hundreds of Cartier stores across the globe.

At the Casa del Mar hotel in Corsica’s Porto-Vecchio, Bonnefille panels grace the lobby. The hotel’s architecture is by Jean-François Bodin. Photo courtesy of Bodin & Associés

Working with Moinard, Bonnefille has created custom wall panels based on a magnified guilloche pattern like that often used to decorate watch faces. In 2016, for the Loro Piana flagship store on Paris’s Avenue Montaigne, he designed a mural composed of overlaid gold and brown rectangles. He has also decorated a château to the east of Paris with bespoke furniture, carpets and wall coverings whose colors he based on the trees in the owner’s arboretum.

His process is both original and very personal. To create his highly textured pieces, he mixes pigments with sand and ground rock. Sometimes, he applies gold or silver leaf on top; other times, he stamps the surface with fabric, leaving behind the imprint of its weave. He refers to the result as a “textile fossil.”

Bonnefille created panels to sit within the dramatic neoclassical moldings in the ballroom of the Paris office of the international law firm Clifford Chance. Photo © Jacques Pépion

Bonnefille’s inspiration comes almost exclusively from nature, whether it be the different mosses at Kyoto’s famed Saiho-ji temple or the collection of some hundred iridescent scarab beetles he acquired in Thailand. “The particularity of scarab beetles is that their color is extremely durable,” notes Bonnefille. “Some of them found in ancient Egyptian temples have still retained their hues.” 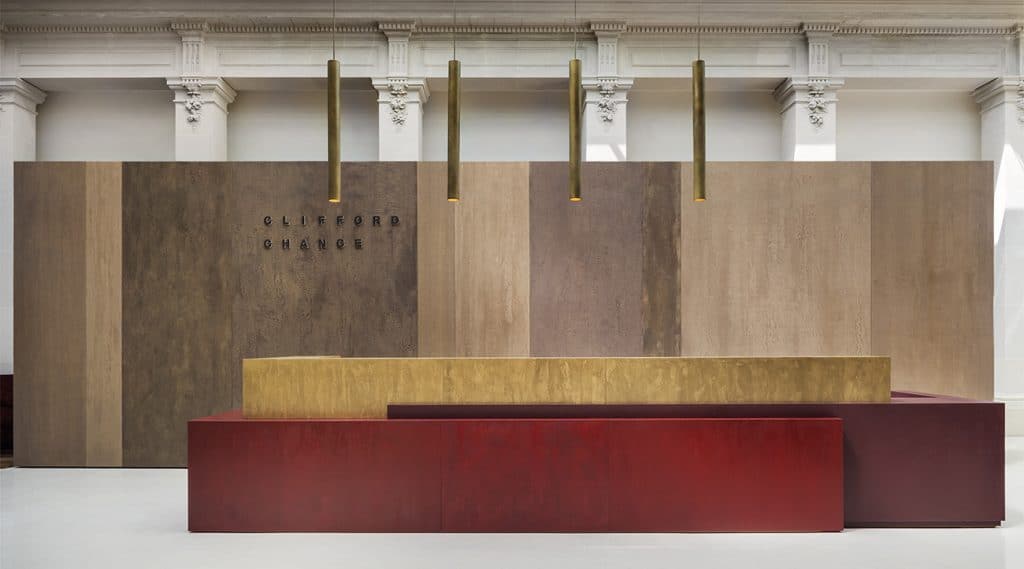 For the reception area of the Clifford Chance offices, Bonnnefille designed both the wall — a vertical partition in shades of bronze — and the front desk, which was assembled using panels in shades of burgundy and gold. Photo © Jacques-Pépion

Bonnefille was born in 1958 and brought up partly in the wild Auvergne region of central France, where he developed his love of nature. Watching his great-aunt, an archaeologist and painter, at work sparked a desire to pursue a creative career. He earned degrees from both the École Boulle and École nationale supérieure des Arts Décoratifs, in Paris, before embarking upon a career. Early commissions came from designers, including Michel Boyer and Philippe Starck, who had employed some of his professors, and these projects saw him creating murals for the offices of CEOs and frescoes for private boats.

Bonnefille made this multipanel painting for the penthouse of London’s Renzo Piano–designed Shard tower. Photo courtesy of Pierre Bonnefille

One of his formative projects was working with Olivier Gagnère in the mid-1990s on the Café Marly at the Louvre, whose decor is still intact nearly 25 years later. Bonnefille suggested that the tones of the walls be inspired by those at Pompei, whose destruction by the 79 AD eruption of Vesuvius he referenced by adding ashes to the wax polish he used and passing a hot iron over the finished surface, for a burnt effect.

Bonnefille moved to Maisons-Alfort in 1997, when he acquired the former wood workshop where he now has his atelier. His home is located on the other side of the property’s garden, which contains some 60 trees, the most striking of which is a huge Bordeaux-colored cherry plum. In his office is an engraving by his artist friend Marco Del Re, a sculptural steel mesh chair designed by Ron Arad in 1992 and a small aluminum suitcase. “I’m always ready to go on a trip,” he says.

Seen above is the painting made for the Shard in situ. Photo courtesy Pierre Bonnefille

While giving a tour of the atelier, Bonnefille stops to consult with his assistant about a series of mosaic-like motifs created using small offcuts of Murano glass in vibrant blues, oranges and reds. The main space is dominated by two long trestle tables and a filing cabinet made from drawers that once belonged to the British Museum in London. Just down the road is a more spacious two-level production workshop, topped by a vertiginous glass roof. Between the two spaces and a showroom in central Paris, Bonnefille now employs a team of 20.

When asked about the evolution of his work over the decades, he replies, “I have the impression I always do the same thing, but each time in a slightly different fashion.” While continuing to be passionate about texture, color and nature, he has also, in the past five years, started to explore in depth the reflections and vibrations of water. He has also produced a series of paintings, titled “Furoshiki,” inspired by the traditional Japanese art of wrapping bundles.

The Metamorphosis collection also includes the Polygon 1 table seen above. Behind hangs Bonnefille’s Bronze Painting 49, which he crafted using mixed media, including a layer of bronze powder on metallic mesh. Photo © Ian Scigliuzzi

Whatever Bonnefille is working on, one thing remains constant — his almost legendary calm. “I’ve never seen him annoyed or perturbed by a dramatic situation,” says Bruno Moinard. “Nothing is ever a problem for him. He’s like a sage in perpetual movement.”