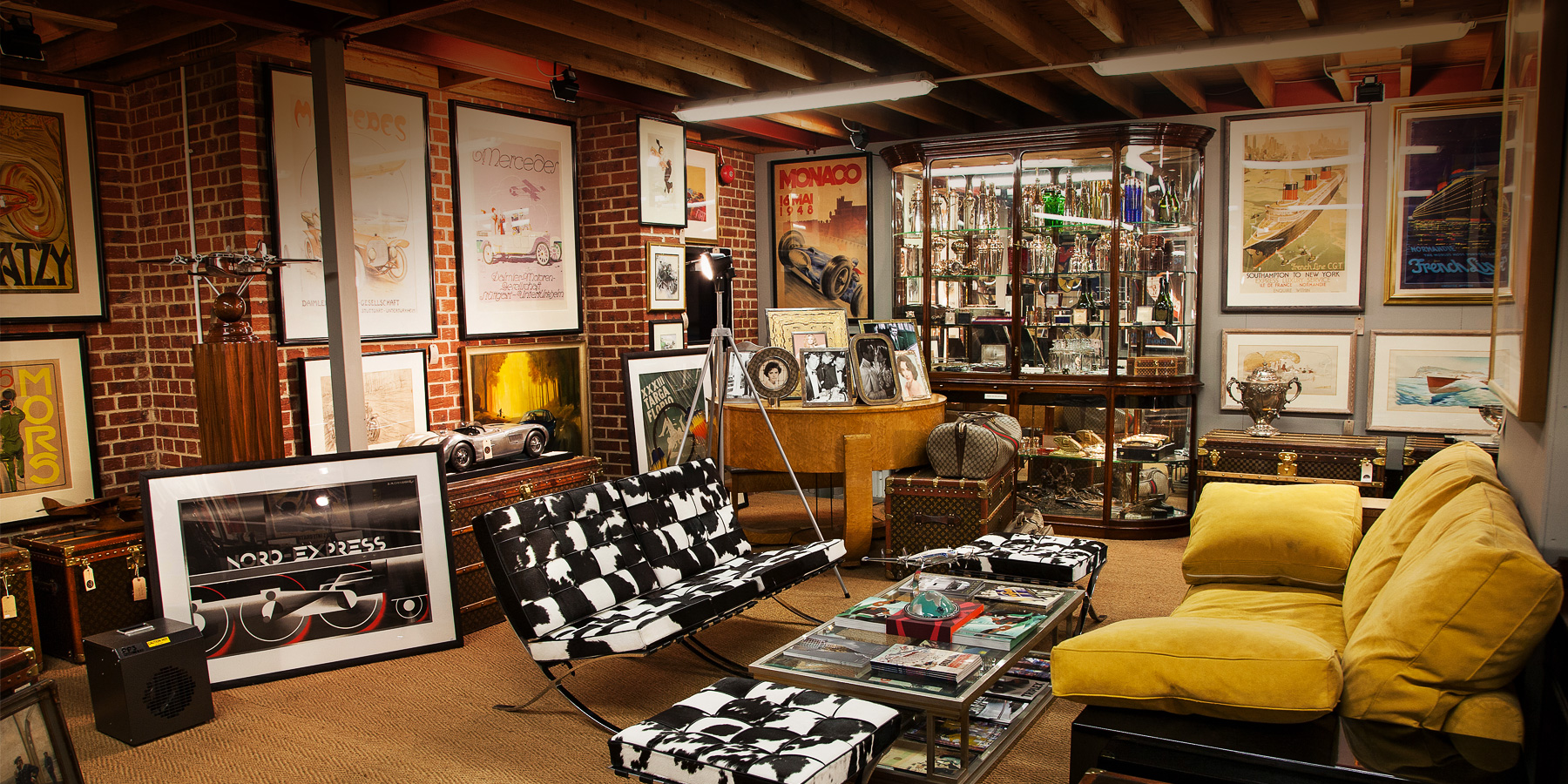 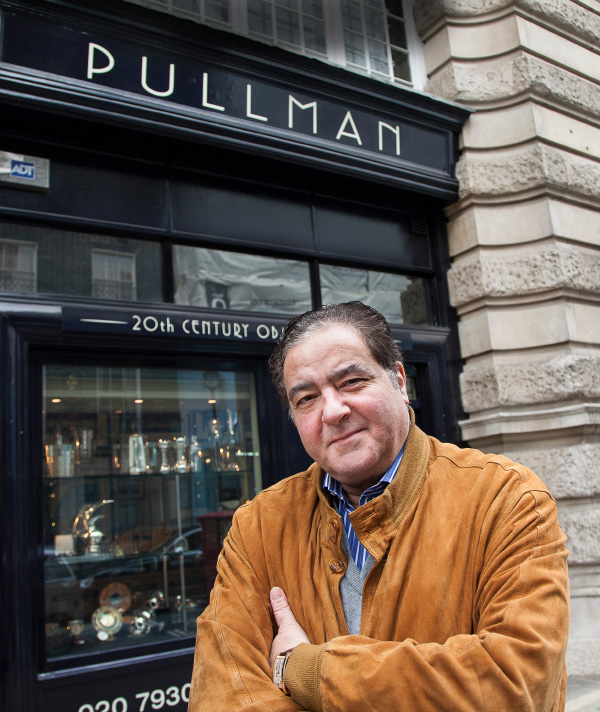 Your Louis Vuitton steamer trunks are being unpacked upstairs at the Savoy while downstairs, in the American Bar, you hear the sound of ice chips in the bartender’s silver cocktail shaker chilling your gin martini. The lady across the room has caught your eye, so you offer her a cigarette from your Cartier ribbed-silver cigarette case, followed by a flame from its matching lighter.

When you step into London’s Pullman Gallery, it’s impossible not to travel back in time to scenes such as these, set in the swell decades at the start of the 20th century. Nestled at the corner of London’s King and Bury streets, this destination for objets de luxe is chockablock with the accoutrements of the gentlemanly high life.

The best time to wander by Pullman is when the sun is setting and the gallery’s backlit mirrored shelves glisten through the windows with silver ice buckets, wine coolers and cigar boxes. Inside the cozy shop, which has the faint, delicious smell of cigar smoke, you’re likely to find owner Simon Khachadourian chatting with one of his many faithful clients.

Khachadourian first set up shop in 1980 in Belgravia before moving the gallery in 1997 to its current address in St. James’s, a dream location next door to Christie’s. Khachadourian, like so many gallerists, enjoyed a healthy antiques hobby before becoming a dealer. A London native and a ship broker by trade, he spent many a morning before work combing the antiques stalls at Bermondsey and Portobello, looking for automobile art and Lalique car mascots, those romantic hood ornaments made from the 1920s to ’50s. The collector’s obsession grew, and Khachadourian began shopping obscure French markets, antiques fairs and auctions, building his stock before leaving the ship business to open a gallery of his own. 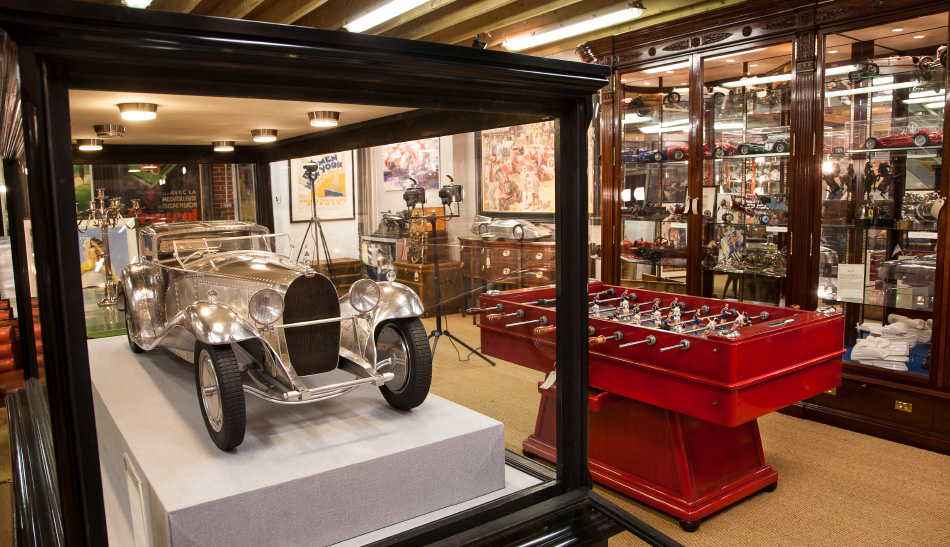 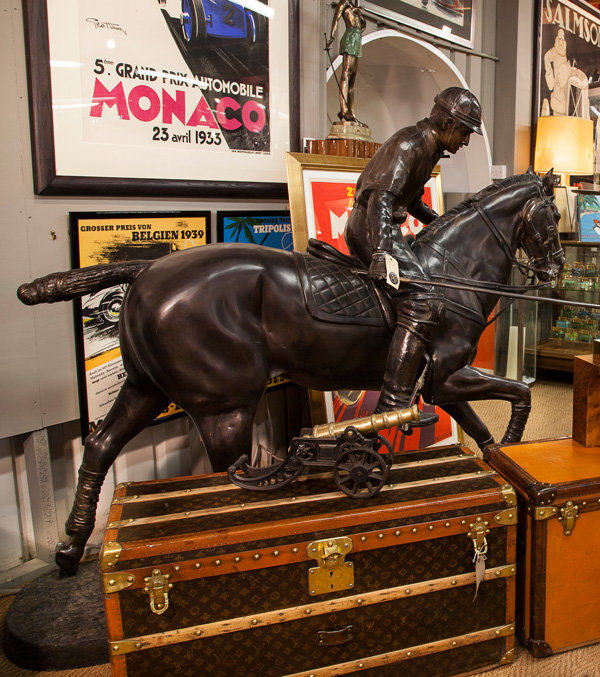 Also at Pullman Studios, a polo player in bronze stands beside vintage Louis Vuitton trunks, a particular speciality of Khachadourian’s.

Today, the Pullman Gallery sells not just Machine Age objects galore — Napier cocktail shakers, Dunhill table lighters (for cigarettes and cigars), vintage travel posters of the Côte d’Azur and Gstaad, rare Alfa Romeo tinplate toys, sterling-silver models of World War II aircraft and one of the world’s finest, most edited offerings of vintage Louis Vuitton luggage — but the lifestyle that goes with them, too.

“Our client is a bon vivant,” says Khachadourian, sitting atop one of his Vuitton trunks in the tiny King Street shop, surrounded by two levels of antique travel posters. “A bon vivant who also understands that if you look at a Tiffany cocktail shaker, there is nothing to doubt about its quality. If it was quality and expensive in nineteen-thirty-five, it is quality and expensive today.”

Khachadourian notes that at least a third of his clientele is American, and he sells frequently to U.S. interior designers via 1stdibs. (Pullman was among the initial group of U.K. dealers to join the site.) The gallery tends not to show at fairs and does not send out email blasts, but anyone who has ever been a customer is lucky enough to receive the catalogs that Pullman publishes four times a year. Well-photographed, printed on heavy paper and properly bound, these “magazines,” as Khachadourian calls them, are worthy of the coffee tables upon which they often linger for some time. “We’re old-fashioned like that.” 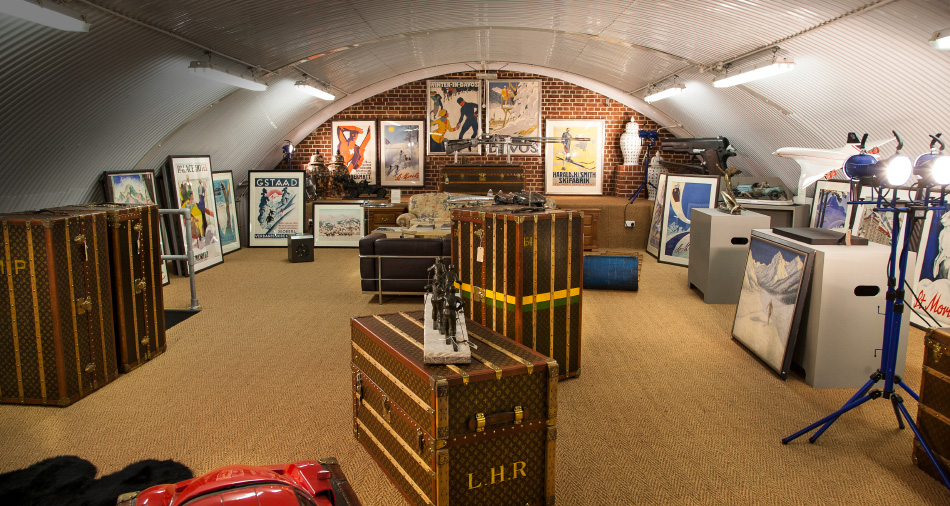 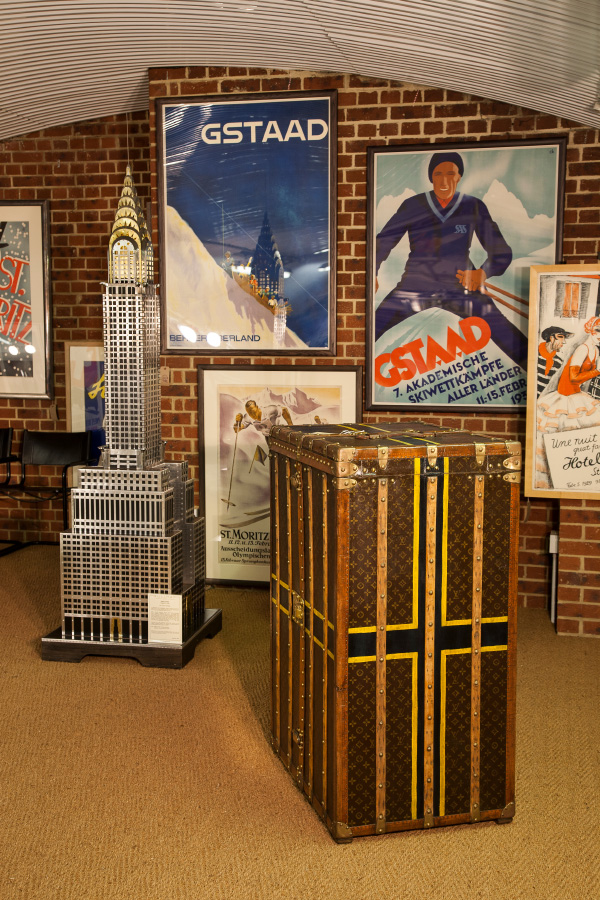 A model of New York’s Chrysler Building, made by John Elwell, lights up from within.

But Pullman is also progressive. In 2011, Khachadourian converted a 6,000-square-foot warehouse into a by-appointment-only gallery-style experience for his loyal clients, giving birth to Pullman Studios. Hop a taxi from the King Street shop, and 15 minutes later, just across the Chelsea Bridge, you’re entering something called the London Stone Business Park, where the 19th-century arches of an old railroad bridge now contain a beehive of commercial enterprises — wine importers, framers, caterers, auto-mechanics and Pullman. Here, signature navy-blue painted-metal shutters open to reveal a man cave fit for Aladdin, overflowing with upscale boys’ toys and treasures galore.

Sisal underfoot and original exposed brick walls create an unfussy, masculine backdrop for Pullman Studios’ oversized motoring and ski posters and even a 1960 foosball table by Spanish-maker Cordoba. Yes, there’s a slight chill in the air and a train occasionally rumbles across the bridge overhead, but it all adds to the atmosphere. “You can have a glass of Champagne, tea and sandwiches, a cigar, whatever you want,” says Khachadourian, who himself has been surprised by the success of the space, noting that some clients arrive at 11 in the morning and stay until closing time. “We’ve even had some ask if they could sleep here.”

The depth and breadth of Pullman’s holdings is easily discerned in this space. There’s an entire display case of Dunhill’s hand-painted “Aquarium” lighters, the paperweight-like table lighters with hand-painted Perspex panels, all made by Ben Shillingford in the 1950s and ’60s; a monumental aluminum model of the Chrysler Building by British artist John Elwell; graceful Lalique-glass car mascots; Art Deco clocks and barware; and, of course, that unbeatable selection of Louis Vuitton cases.

When it comes to Vuitton, the gallery has sold pieces and patterns dating from as far back as the 1860s right up through the 20th century, including a 1975 Champagne cooler made for a yacht, and a trunk — created for a Paris-Havana habitué in 1997 — that can hold up to 1,000 cigars. Beyond these custom pieces, the trunks are particularly popular as coffee and end tables. One of Pullman’s clients has 400 pieces of Vuitton, all purchased from the gallery, but they’re hardly used for jetting around the world. “He has them all set up in a luggage room that he had built in his home in the Cotswolds,” says Khachadourian. “That’s how he likes to enjoy them.”

Simon Khachadourian shares his thoughts on a few choice pieces. 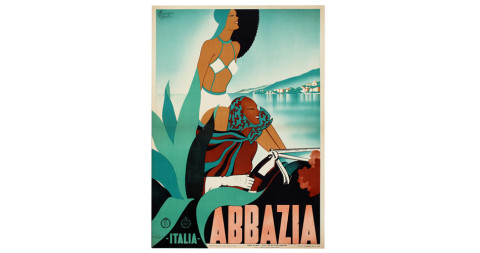 “This is a striking first-edition Italian Art Deco travel poster made in 1938 to promote the beautiful resort of Abbazia, which is now located in Croatia. It was printed by Barabino & Graeve in Genoa.” 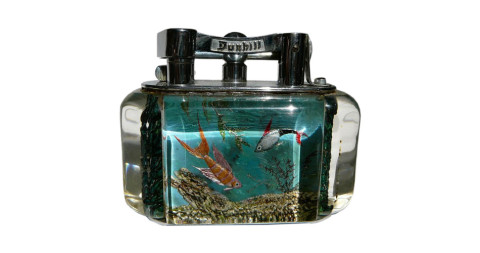 “We are fortunate to have a sizable collection of the ‘Aquarium’ series of lighters by Dunhill. These were skillfully made by one man, Bill Shillingford, in the 1950s and ’60s, using a very complex intaglio technique that created a scene on the inside of Perspex panels. When Shillingford retired, no one else was able to master the technique, and Dunhill was forced to end the line. This very rare silver-plated ‘Aquarium’ table lighter is an excellent example.” 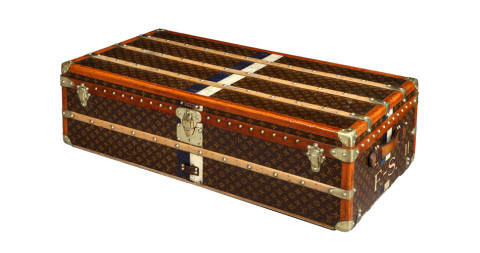 “Essential for the intrepid 19th-century explorer en route to Africa or India would have been this hermetic, termite-proof, zinc-encased Explorer’s cabin trunk. It’s finished with Louis Vuitton brass studs, side handles and locks, plus wooden slats on the top and front. Made in France, this is rare to the extreme, one of only a handful of Explorer’s luggage pieces that we have ever owned.” 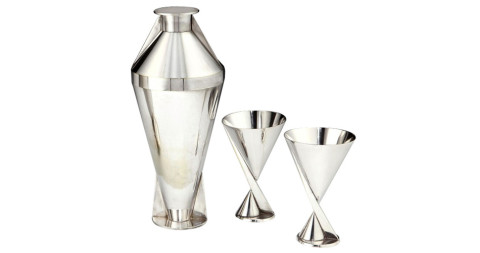 “A design firm located on the Champs-Élysées in Paris from 1927 to 1933, Maison Desny collaborated with the likes of Diego and Alberto Giacometti and Jean-Michel Frank during its short life, creating complete interiors for such clients as Worth and Chanel. The company’s work is now quite scarce and incredibly sought-after. A cocktail shaker set, such as this one, with a shaker and six goblets, is arguably Desny’s most iconic and desirable piece — pure Art Deco.” 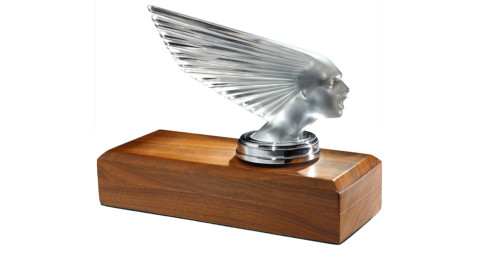 “Victoire or Spirit of the Wind is René Lalique’s most famous range of automobile mascots. Made of clear, polished and frosted glass, this androgynous, open-mouthed Victoire masterfully captures the age of speed and elegance.”