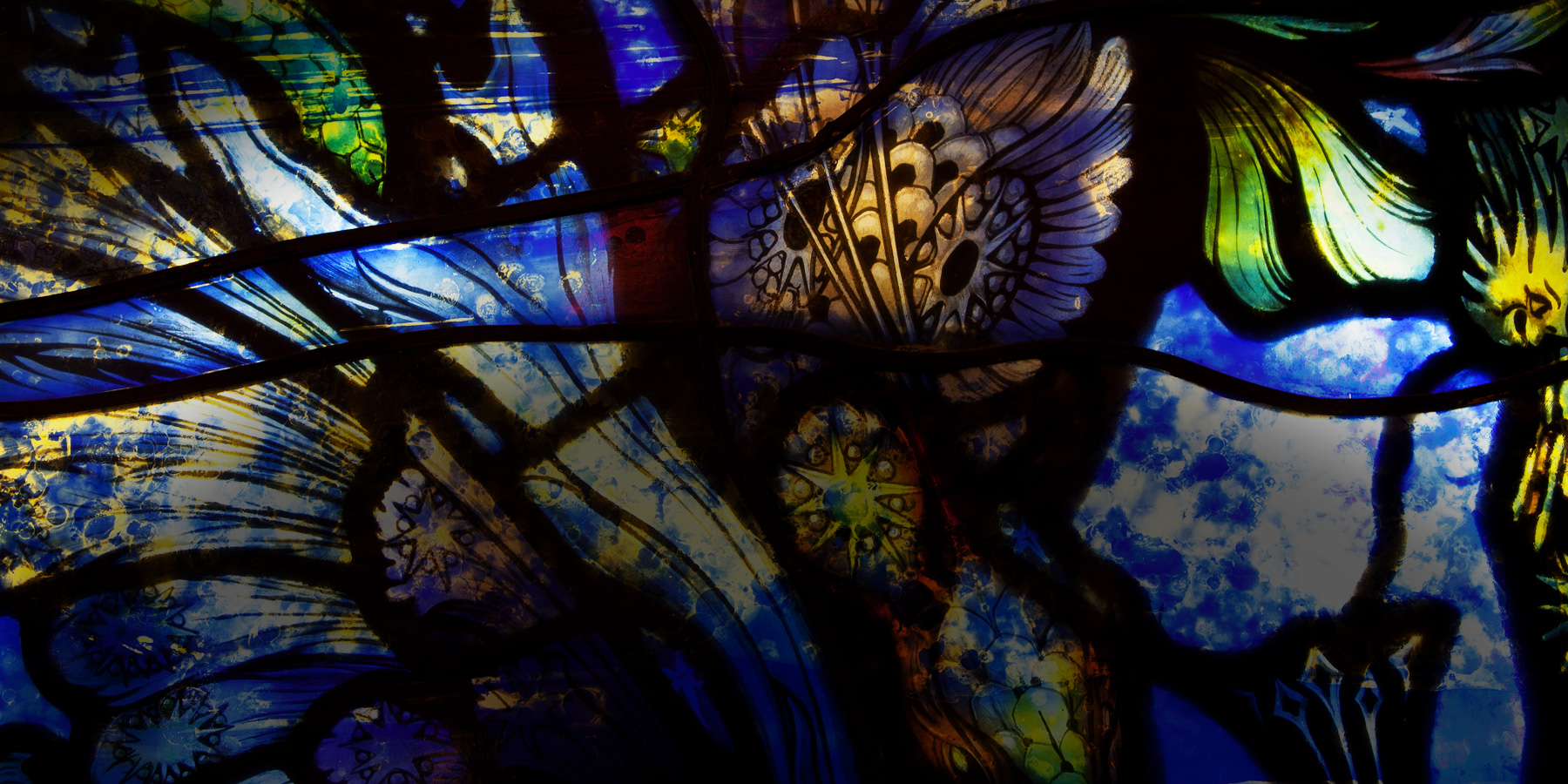 At New York's Retro Modern Lighting, a set of windows created by American artist and aristocrat Robert Winthrop Chanler are on sale for more than a million dollars. An examination of their impeccable provenance and sheer uniqueness reveals why they are deserving of the hefty price tag. 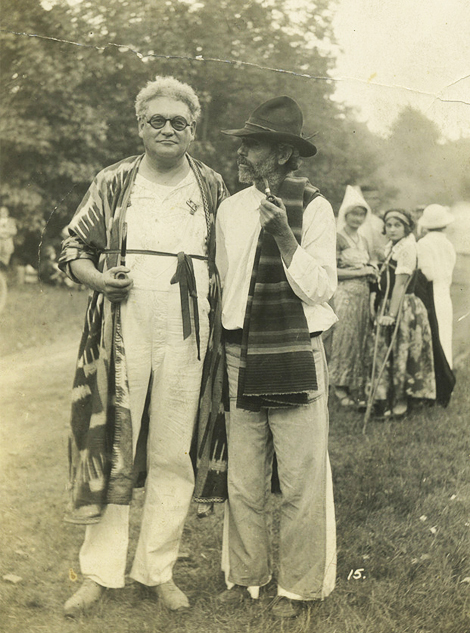 Robert Winthrop Chanler, left, in Woodstock, New York, in 1924 with writer Hervey White, whose radical artists’ colony, the Maverick, Chanler belonged to in the early 1920s.

If you visit Retro Modern Lighting, a Manhattan gallery at 29 East 10th Street, you may find yourself being lured to the rear of the shop by a set of large stained glass windows unlike any you will ever see in a house of worship. Lit from behind, the panels depict weird aquatic, avian and jungle fantasies, each one different. Every window is a menagerie, densely filled with squeaking bats, slithery snakes, snarling dragons and battling undersea creatures in a sea of purple, yellow, orange and green glass. A bit like the portrayals of purgatory in Hieronymus Bosch’s The Garden of Earthly Delights, the scenes are troubling but mesmerizing.

It seems fitting that these offbeat windows are being offered by Arthur and Bronnie Hindin, a colorful couple who have been dealers since 1972 and retain their ’60s aura. “I wanted to be a dealer from the age of six,” says Bronnie, decked out in a custom-made “mod” outfit, Jeffrey Campbell shoes from the United Kingdom and vintage Gucci glasses.

The Hindins specialize in mid-century American and Italian lighting but they don’t limit themselves in any way. Interspersed among the forest of modern standing lamps and chandeliers are contemporary wall reliefs made with tin cans, mosaic birdbaths, giant carved wood animal head sculptures by William P. Katz and more. “Our taste is eclectic,” Arthur says, winking behind his round tortoiseshell Miu Miu glasses.

The five stained glass windows were made in 1918. They are from a set of seven from a house in Connecticut owned by members of the illustrious Whitney family. Measuring nearly six feet tall and three feet wide, each window is leaded, painted and layered (glass experts call such layering “plating” when one piece of glass is put on top of another to create depth or shadow). As in ecclesiastical stained glass windows, faces and details are painted on top.

The windows were designed by an eccentric, larger-than-life artist named Robert Winthrop Chanler (1872–1930) as a private commission for the sculpture studio of the heiress Gertrude Vanderbilt Whitney, founder of the Whitney Museum of American Art. Chanler had a patrician New York background: He was a descendant of the Stuyvesants, Livingstons, Astors, Winthrops and Aldriches. Orphaned at the age of five, with numerous siblings who were collectively called the “Astor Orphans,” he was raised at Rokeby, a mansion on the Hudson River in Dutchess Country that had been in his extended family since 1815 (and still is). As a much-neglected child, Chanler seems to have spent his youth painting murals on the walls (one of which was photographed for a recent New York Times story on Rokeby) and roaming around the 420-acre, Frederick Law Olmsted-designed estate.

When he came of age, he fled first to Paris to study art with Jean-Léon Gérôme and at the Beaux Arts and then to Rome. He painted murals and folding screens. One of Chanler’s screens, which depicted a gaggle of giraffes, was exhibited alongside work by Matisse at the 1905 Salon d’Automne in Paris, prompting a critic to label such painters “les fauves” (wild beasts), thus inaugurating the term Fauvism. “Giraffes” is now in the Luxembourg Museum in Paris.

Chanler returned to New York and joined the National Society of Mural Painters. He had many private commissions: One was to paint a tropical avian ceiling in the exclusive Colony Club in New York and another, a mural with wolves chasing deer, for the home of Mai Rogers Coe in Oyster Bay, Long Island. Most of these decorative schemes remain in place. 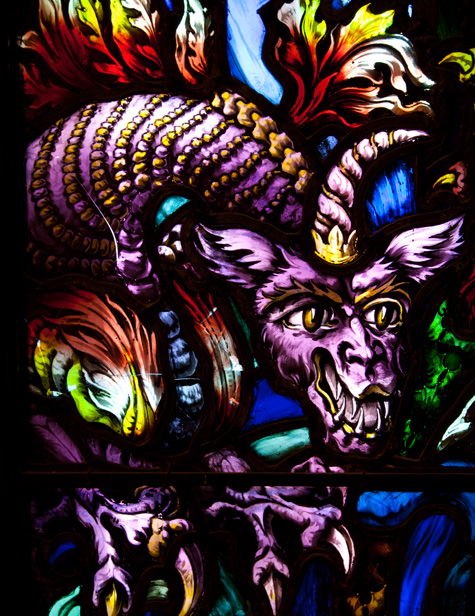 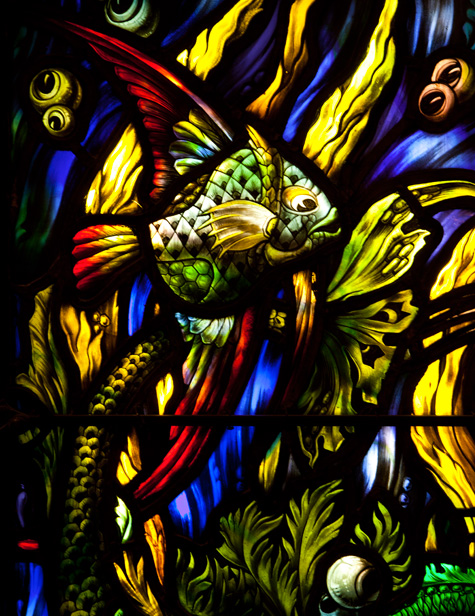 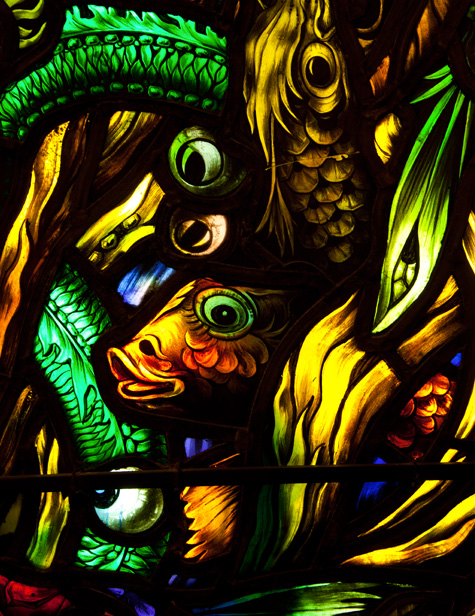 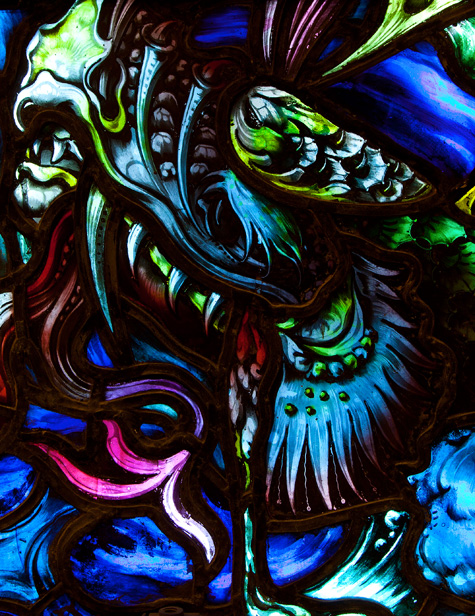 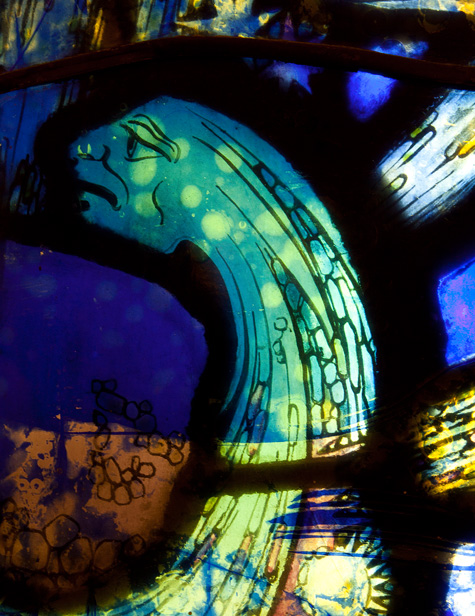 In a magazine advertisement from the 1920s, Chanler promised to provide “rooms, ceilings, screens and leaded glass windows of original design.” His preferred subject matter was nature. In his 1922 book, The Art of R.W. Chanler, Chanler’s friend, the Russian émigré Ivan Narodny, praises the artist’s flamingos, birds of paradise, peacocks, “strange beasts, fabulous birds and aquatic monsters.” Describing one undersea scene, Narodny writes, “It is a symbolic fairy tale of the deep sea…. We almost hear the whirlpool of the dark depths and feel the tremble of the sensations of primitive sea life.”

Chanler was highly productive. He exhibited at least 25 folding screens in the groundbreaking Armory Show of 1913 and won critical praise for them. “His works were up at the front of the show and were the first to be viewed,” Arthur says, noting that Chanler was selling screens for $10,000 apiece then. “The prices for works by most artists exhibiting at the Armory Show now sell for many millions.”

In 1914, perhaps influenced by Japanese screens, Chanler painted a standing screen showing a family of porcupines in brown, silver and black as seen from above. It was purchased by his sister, Mrs. John Jay Chapman, who donated it in 1927 to the Met, where it remains. That same year House Beautiful reported that Chanler was “one of the most truly imaginative and original artists living.”

In about 1906, Chanler met Gertrude Vanderbilt Whitney, who commissioned the stained glass windows now for sale. They grew up in the same social circle and were obviously friendly. “How fine he is in his way,” Whitney wrote in her diary after meeting him, as recorded in B. H. Friedman’s 1978 biography of her. “To hear him talk about art, to hear his ideas, to see the great truths coming from him is worthwhile.” She continued: “I could talk to him with my soul laid bare, because he is such a natural person, he brings out the natural in others…. I am sure he is a genius.” They remained lifelong friends.

She wanted the windows for her sculpture studio on MacDougal Alley in Greenwich Village. In 1918, she asked Chanler to decorate the entire space. Over a period of five years, he created an immense chimneypiece of three-dimensional flames, floor to ceiling, in plaster with additional inserts of bronze blazes. He covered the entire ceiling with plaster constellations and then created the windows, which were reportedly removed soon after Whitney’s death in 1942 by relatives living in Connecticut.

Now the studio, minus the windows, is on the World Monuments Watch List (for its deteriorating character) and it has been designated a National Historic Landmark. It is still used by the New York Studio School of Drawing, Painting and Sculpture. 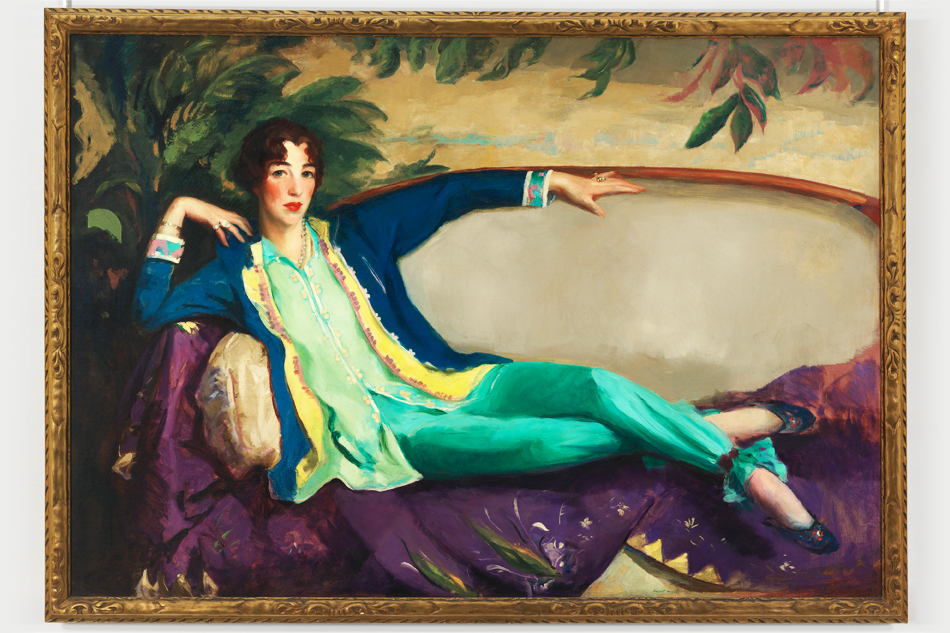 Gertrude Vanderbilt Whitney, 1916, by Robert Henri, is the most famous portrait of the legendary art collector. Whitney befriended fellow New York aristocrat Chanler in 1906 while studying art in Paris. Image courtesy of the Whitney Museum of American Art, New York 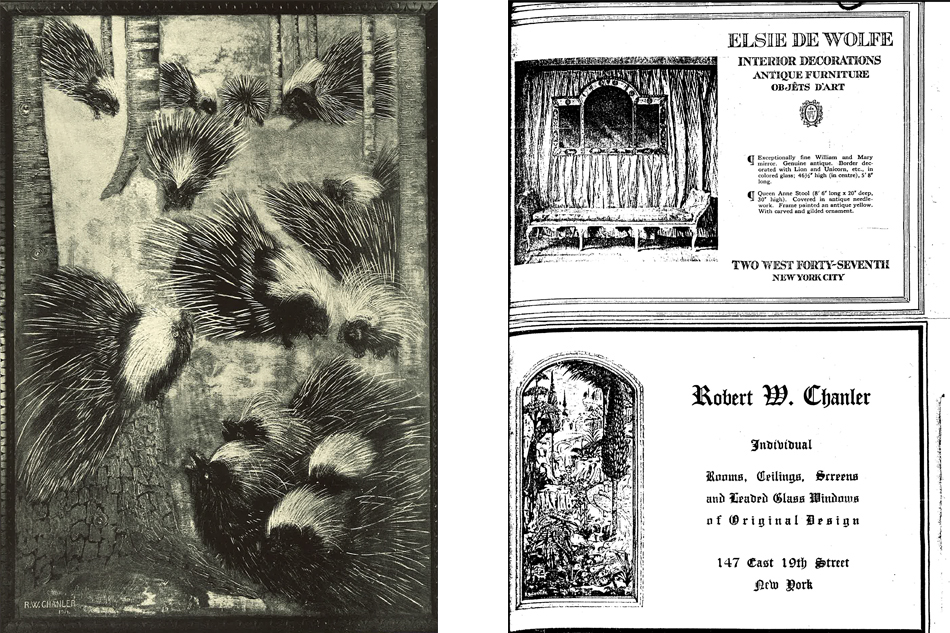 Left: A 1914 screen by Chanler depicting porcupines is currently in the collection of the Metropolitan Museum of Art. Right: An advertisement for Chanler’s design services appeared beneath one for decorator Elsie de Wolfe‘s New York antiques gallery in a 1921 issue of Art & Decoration. 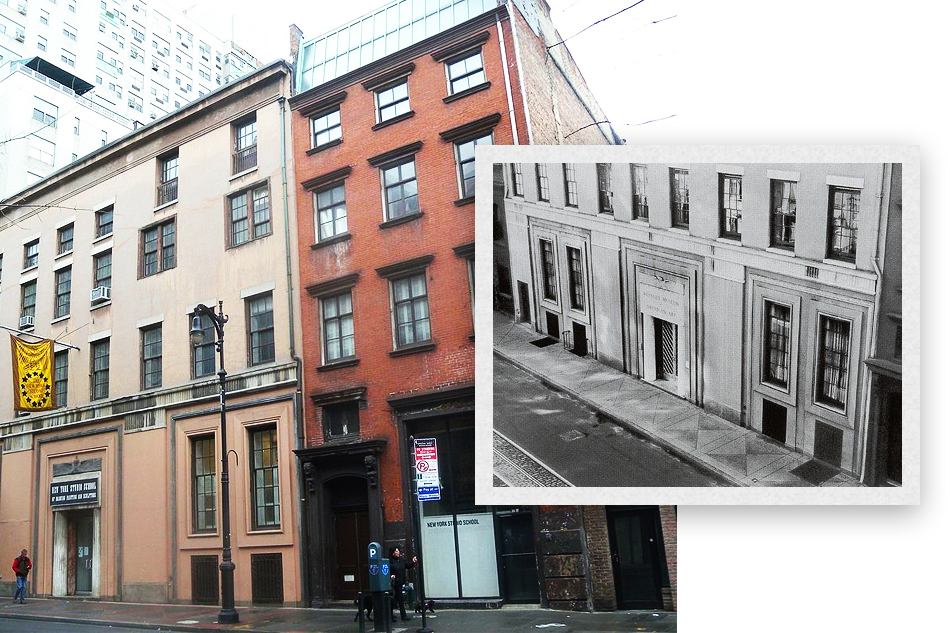 The stained-glass panels now available at Retro Modern Lighting were originally commissioned for the Whitney Studio Gallery, shown at right in 1931, which eventually became the home of the Whitney Museum of American Art. After the museum moved to new quarters on 54th Street, the building became the New York Studio School of Drawing, Painting and Sculpture, shown in the present day at left. 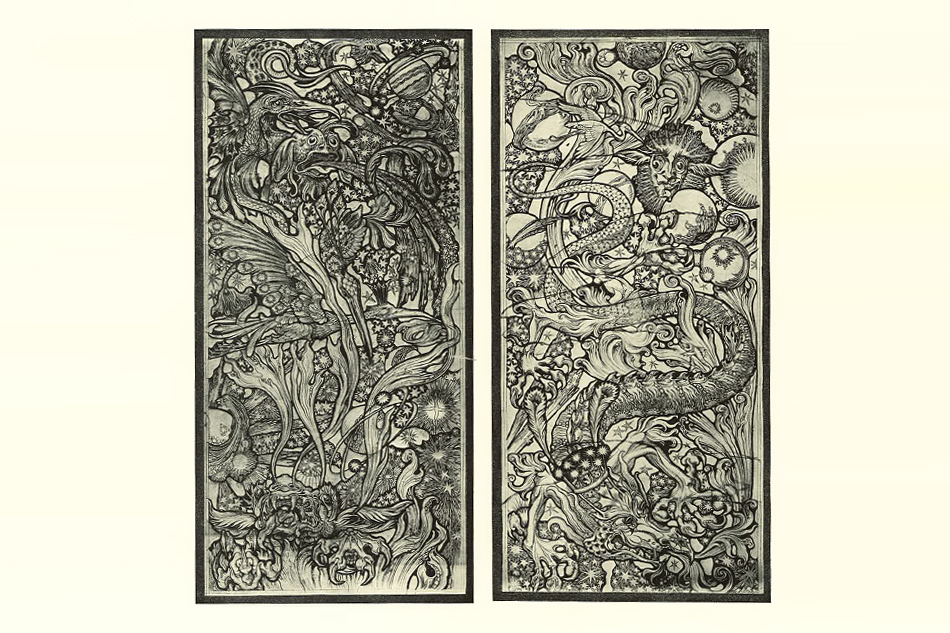 Study drawings of two panels show the high density of details in the illustrations Chanler set to glass. 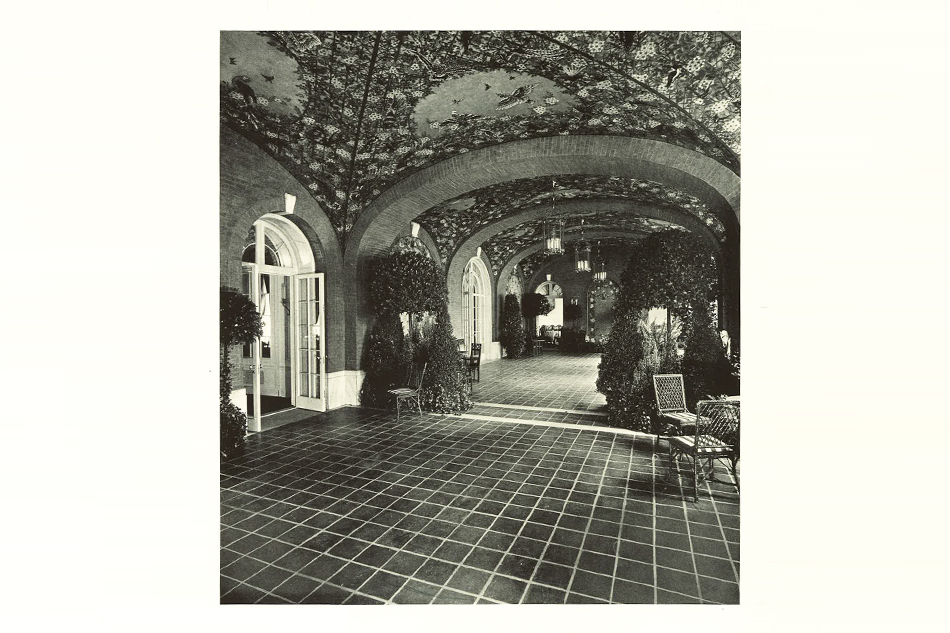 In 1915, for one of his first major commissions, Chanler painted the ceilings of New York’s Colony Club with scenes of tropical foliage and birds.

With one exception, the windows are in fine original condition. Hindin says he spent several thousands of dollars restoring one of them. Leaded glass does not change with age. The mounts have some patina.

The Hindins are asking $1.8 million for the five panels. Of course, they have perfect provenance and are in fine condition. But what makes them so valuable? They are unique. There are apparently no other Chanler colored stained glass windows and certainly none with Bosch-like monsters.

Lauren Drapala is a Chanler scholar who is preparing a book (Robert Winthrop Chanler: Discovering the Fantastic, to be published by The Monacelli Press this spring) that grew out of a Chanler symposium last October at the Vizcaya Museum and Gardens in Miami — the former home of industrialist James Deering, who commissioned Chanler to create an aquatic ceiling in the grotto there. “I haven’t seen any other examples of colored stained glass by Chanler,” Drapala says. “There is a Chanler preparatory drawing for an ecclesiastical window in the library of the Cooper Hewitt Museum, and I understand Chanler had clear leaded-glass windows at his final house in Woodstock, New York. That is all I’ve found.”

They are utterly unlike any other American stained glass windows. Even though the Gilded Age ushered in boom times for stained glass, and after 1900 Louis Comfort Tiffany, John La Farge and the J & R Lamb Studios in New York were all producing masterfully made stained glass lamps and windows, most of them were ecclesiastical in subject matter. 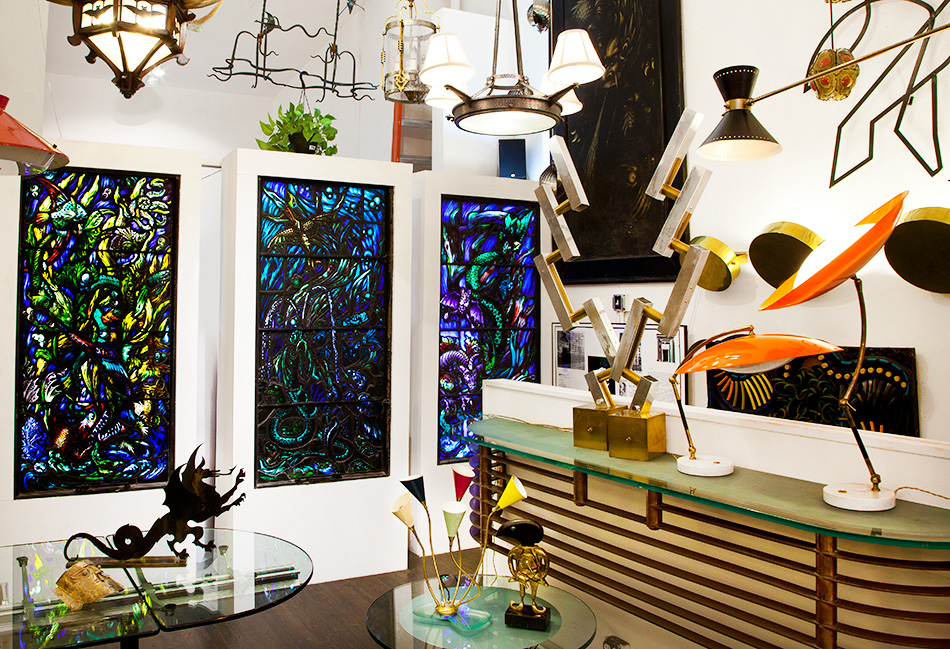 In Retro Modern’s showroom, the nearly six-foot-tall windows stand out amid the eclectic mix of lighting fixtures that make up the core of the gallery’s inventory. 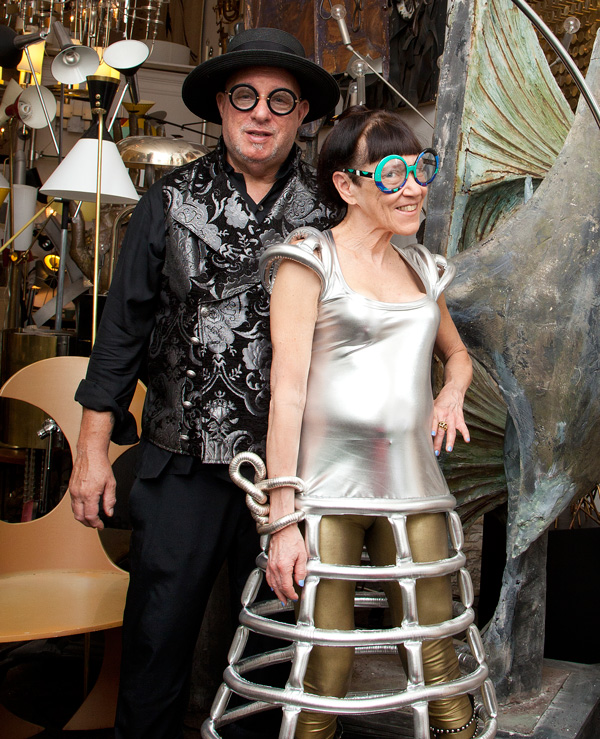 Dealers since 1972, husband and wife Arthur and Bronnie Hindin of New York’s Retro Modern Lighting have held on to a certain 1960s look.

“The market for leaded glass is dominated by Tiffany and to a lesser extent LaFarge,” says James Zemaitis, a curator of design arts at the Indianapolis Museum of Art. “Tiffany works can sell for hundreds of thousands of dollars. Chanler’s work is different. There are few of his works of art on the market and none I’m aware of, with this exception, in glass.”

Newark Museum veteran decorative arts curator Ulysses Dietz thinks the Hindins’ price is fair. “If these windows were by Tiffany Studios, they would be $5 million,” he says. “For something this important — the design is wild, and the craftsmanship is spectacular — the price is a bargain.”

He also said Chanler would have had to employ incredibly skilled stained glass artists to create something of this sophistication. “It’s a shame the artisans never get credit. No one actually thinks about who made the stained glass windows; we only focus on the art.” (His guess is that it was done at J & R Lamb.)