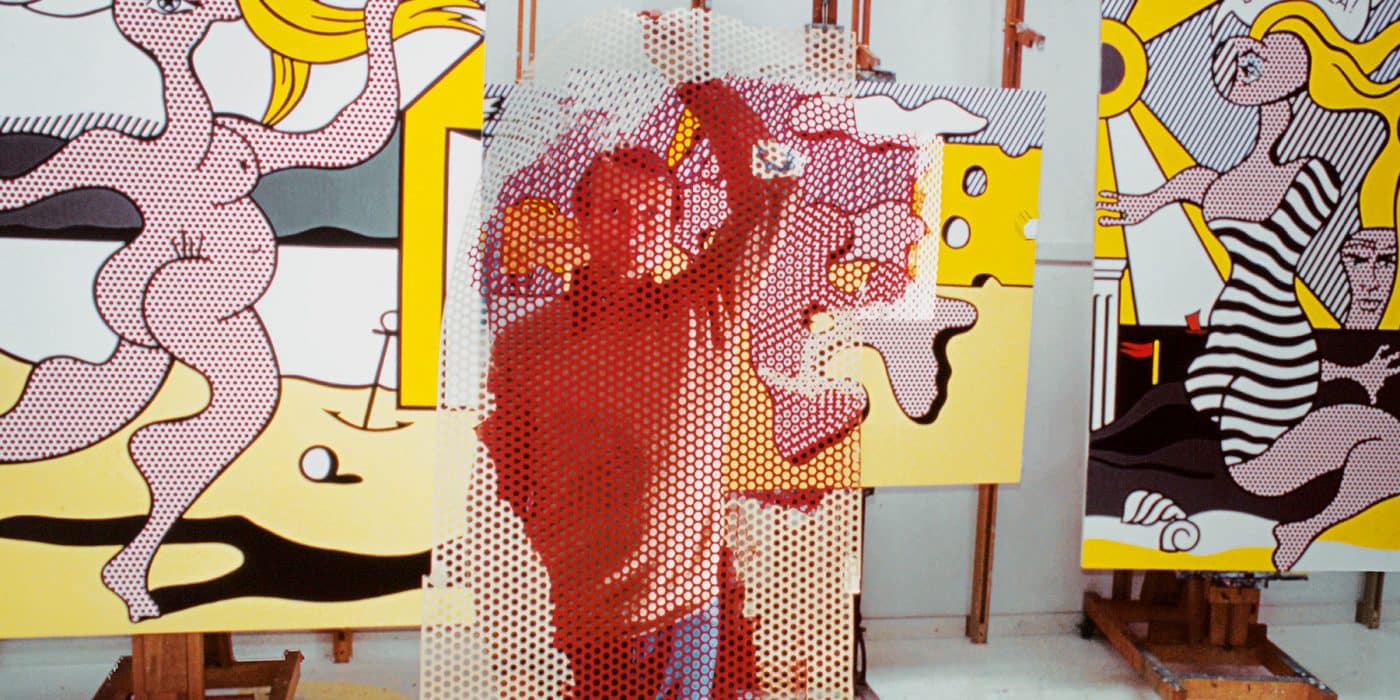 July 7, 2019Pop art legend Roy Lichtenstein could have made an entire career out of his comic-strip paintings of button-nosed beauties and their square-jawed beaus. Yet he only spent five years making those signature canvases, which elevated cheap entertainment to high art — to the dismay of many and the delight of many more. “He could have kept turning them out and making tons of money, but he didn’t want to do cartoon painting forever. He wanted to experiment,” says art historian and author Avis Berman, who has written extensively on the artist.

The resulting variety presented Berman with a challenge when she set about winnowing the artist’s 5,000-plus works down to 100 for Roy Lichtenstein: The Impossible Collection. The new volume is part of Assouline’s series of lavish coffee table books that each bring together an ideal cache of, say, wine, Warhol, Rolexes, Design and the like. Berman does, of course, include some of Lichtenstein’s high-value greatest hits, like Masterpiece, 1962, a comic-book-style satire of the melodrama of the art market, which sold for $165 million in 2017. But her carefully curated selection also tells the story of what came before, during and after his Pop breakthrough, or the “big bang,” as she calls it.

It’s “impossible” that such a collection could exist not only because the works are scattered around the world but because Berman included ones that cannot be removed from their sites, like his 1990 Times Square Mural, in the 42 Street subway station, which she describes in the book as “a fantasy of New York transport.”

Berman cites Pablo Picasso‘s Three Musicians as the inspiration for Lichtenstein’s The Musician, 1948, an oil and graphite pencil on canvas measuring 18 by 16.25 inches.

She starts her collection in the early 1940s, with little-known works (one of which is a semi-abstract) that haven’t received their due, and ends in 1997, the year the artist died unexpectedly from pneumonia at age 73. The final piece is a reinterpretation of an Henri Matisse interior and bather, rendered in Lichtenstein’s evolved signature style: benday dots, bold lines and flat fields of color.

“Lichtenstein is one of those artists who — I have to use the cliché — seems deceptively simple,” says Berman. She knows the artist’s story better than most, having conducted dozens of interviews with his associates, relatives and collectors over the past two decades for the Lichtenstein Foundation’s oral history project. “You first think of flat cartoons, but as you work more and more on him, you notice more and more variety.”

Flipping through the giant pages of the oversize tome — each work is given a full color plate and meaty caption — what emerges, in particular, is an artist who was less interested in how the world looked than how it was reproduced, not only in the mass media but throughout art history.

“All my art is in some way about other art, even if the other art is cartoons,” he once said. (The book is full of the artist’s quotes.) He grew up in the museums of New York City and studied art history as part of a studio-art program after serving in the army as a mapmaker during World War II. Needless to say, he was an informed imitator.

Lichtenstein saw Look Mickey, 1961, an oil on canvas measuring 48 by 69 inches, as the work that began to pull him away from Abstract Expressionism. “I had this cartoon painting in my studio, and it was a little too formidable,” he wrote. “I couldn’t keep my eyes off it, and it prevented me from painting any other way.” © Board of Trustees, National Gallery of Art, Washington, D.C.

We see his humor shine through in 1951 in quirky abstracted takes on Emmanuel Leutze’s Washington Crossing the Delaware and American Western genre painting. He goes on to emulate, among others, Paul Cézanne, Vincent van Gogh, Piet Mondrian, Fernand Léger, futurists, Surrealists and, most of all, Matisse and Pablo Picasso, two of his indisputable heroes.

As Berman writes in her introduction, “In essence, he would populate his own museum of modern art.” And then he would encode those modern masters with the syntax of inexpensive printing, poking holes in art’s sacrosanct veneer, just as he had by upgrading the aesthetic cachet of cartoons.

A particularly dazzling sequence from 1963 spotlights his democratic approach to subject matter: We go from Femme d’Alger, Lichtenstein’s complex interpretation of Picasso’s series from 1954–55 (which was, in turn, modeled after a work by Eugène Delacroix); to Hopeless, a cartoon painting of a pretty blond lying expressionless as tears stream from her eyes; to the quintessentially Pop Hot Dog with Mustard. Each is given the same treatment, painted in the “transfiguring idiom,” as Berman puts it, of mechanical reproduction, denoted most clearly by the benday dot, those patterns of tiny circles used in commercial printing, like newspapers, to indicate shading.

In 1961, Lichtenstein (left) was captured standing with legendary gallerist Leo Castelli among several of his works from that year: Mr. Bellamy, Girl with Ball and Step-on Can with Leg. Photo © courtesy the Library of Congress

Berman’s selection makes visible the works’ fascinating evolution across subject matter, starting with Girl with Ball, 1961. Translated from an ad for a resort in the Poconos, it’s one of Lichtenstein’s earliest images addressing the unattainable ideals of femininity and masculinity projected by the media. (Architect and collector Philip Johnson purchased it from Lichtenstein’s first show at Leo Castelli Gallery.)

Lichtenstein eventually began using metal screens as stencils for the dots, which, by the early 1970s, he was employing to indicate sophisticated passages of light and shadow. For instance, in the 1973 Still Life with Peeled Lemon, his take on a Dutch Old Master scene, he refracts them to suggest the appearance of light moving through crystal.

Berman describes WHAAM!, a 1963 oil and magna on canvas as Lichtenstein’s largest work (it measures 68 by 166 inches), writing that it “spectacularly balances clashing forces in both subject and style.”

Of this 1964–65 porcelain enamel on steel work measuring 42 by 42 by 2 inches, Berman writes, “Unlike Lichtenstein’s more typical tearful or anxious female images, Girl in Mirror is a work in which the woman seems thrilled by what she sees.”

The 1970s also yielded a series of mirrors inspired by advertisements for glass. Whereas most representations of mirrors throughout art history show reflections or images, Berman notes, Lichtenstein’s are restricted abstractions of the play of light and shadow on a surface. If they reflect anything, it’s an artist fascinated with perception, looking and seeing.

He continued to mine art history for ways that artists saw things, landing in the mid-1990s on classical Chinese landscapes. Berman includes three of the artist’s works in this vein. Here, Lichtenstein’s benday dots read like molecular particles, alternating in size and density to replicate the fantastically soft clouds and mountains of those Eastern landscapes.

Or rather, the landscapes as envisioned by the classical Chinese painter. As he once said, “My work isn’t about form. It’s about seeing. I’m excited about seeing things, and I’m interested in the way I think other people see things.”