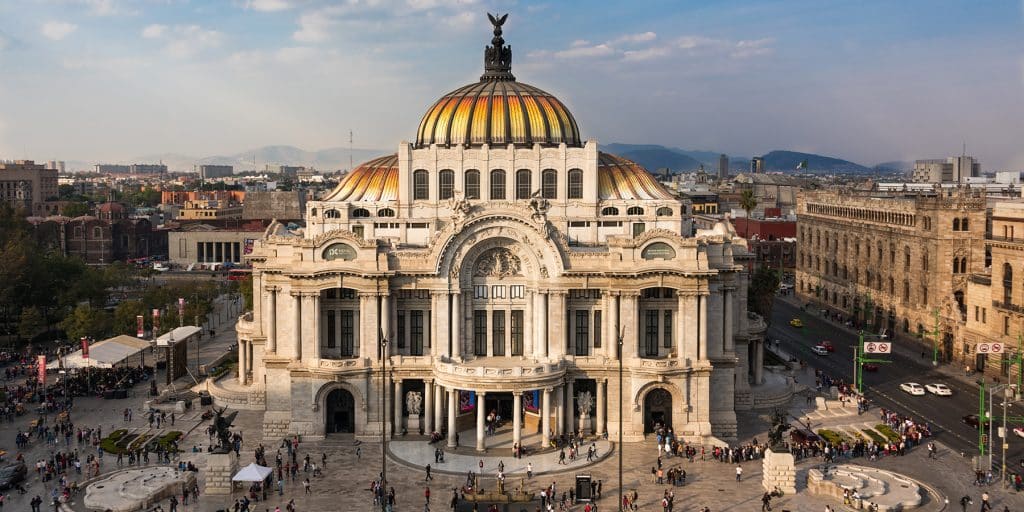 As 1stdibs welcomes a host of new Mexican dealers onto the site, Introspective visits a a pair of capital city galleries admired by the local interior design star, art connoisseur and nascent furniture maker extraordinaire. 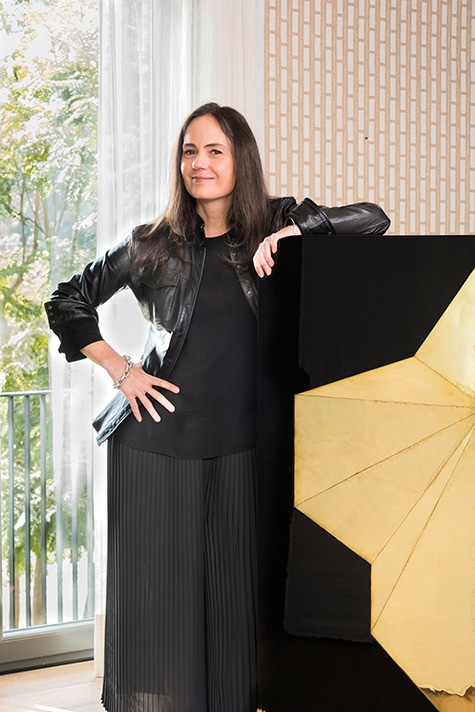 Understated elegance, that’s my mojo,” asserts Gloria Cortina, the designer of compelling interiors and, more recently, a line of sumptuous furniture. We are sitting in her studio space, which she’s carved out of the west wing of her home in Mexico City’s upscale Lomas de Chapultepec neighborhood.

Set amid embassies and mission-style houses, Cortina’s mid-century residence — once the home of her grandparents — was designed by Arturo Pani, a pioneer of the lavish Acapulco look and brother of influential architect Mario Pani. Cortina spent a lot of time here as a child, and she remembers being particularly impressed by the light-flooded oval library overlooking the garden, with its striking mahogany finishes. Since inheriting the house, she has refreshed it with modern touches, mixing calm colors; Mexican marquetry furniture; vintage pieces, like a Baccarat chandelier; and contemporary creations, including her own.

“My philosophy is that design should accommodate the individual,” says Cortina, contemplating her Mathias coffee table, one of 13 pieces that debuted in a late-2016 show at Cristina Grajales Gallery, in New York. The piece is named for the German-Mexican sculptor Mathias Goeritz, who coined the term “emotional architecture” with his longtime collaborator, the modernist architect Luis Barragán. “They played with color and form as an approach to the sublime,” explains Cortina, who graduated from New York’s Parsons School of Design before founding her own firm in 2009. As she says this, her fingers trace the hand-hammered patinated-brass surface of the table; its pentagonal components vary in size and can be assembled in various configurations to suit a client’s space or personal preferences. 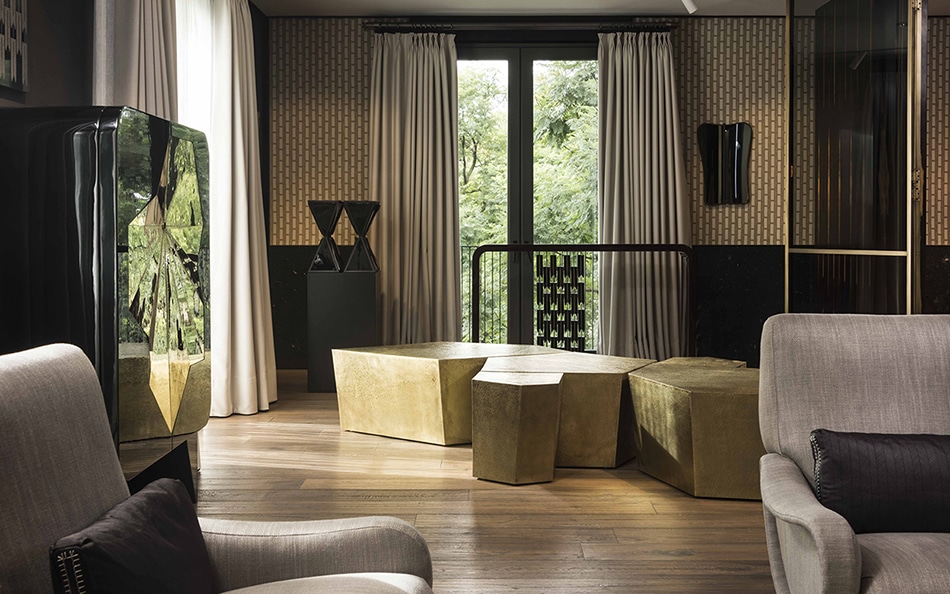 Cortina’s Mexico City studio features her hand-hammered patinated-brass Matthias coffee table, at center, whose elements can be arranged into various configurations to accommodate the needs of different rooms. Behind it, two of her Eye of God side tables sit on a black pedestal to the left of her Black Hawk console. In the foreground, against the left wall, is her Bullet cabinet.

“Today, designers and curators are pushing more and more toward finding a vocabulary that is true to our local heritage,” Cortina says as we discuss other contemporary Mexican makers. Among the galleries and designers she likes are Arróniz Contemporary Art, which shows work by rising Mexican and other Latin American artists, and ITZ, whose lead designer works with master craftsmen to make furniture from tropical hardwood in a workshop in Bacalar, near the border with Belize. “Their creations can make such a strong statement by themselves but also can balance a space right where you have that missing piece of the puzzle,” she notes. The prospect of spending the rest of the day chatting with her in her studio is enticing. But we’ve got some shopping to do, and we’d better get moving if we want to beat the traffic. 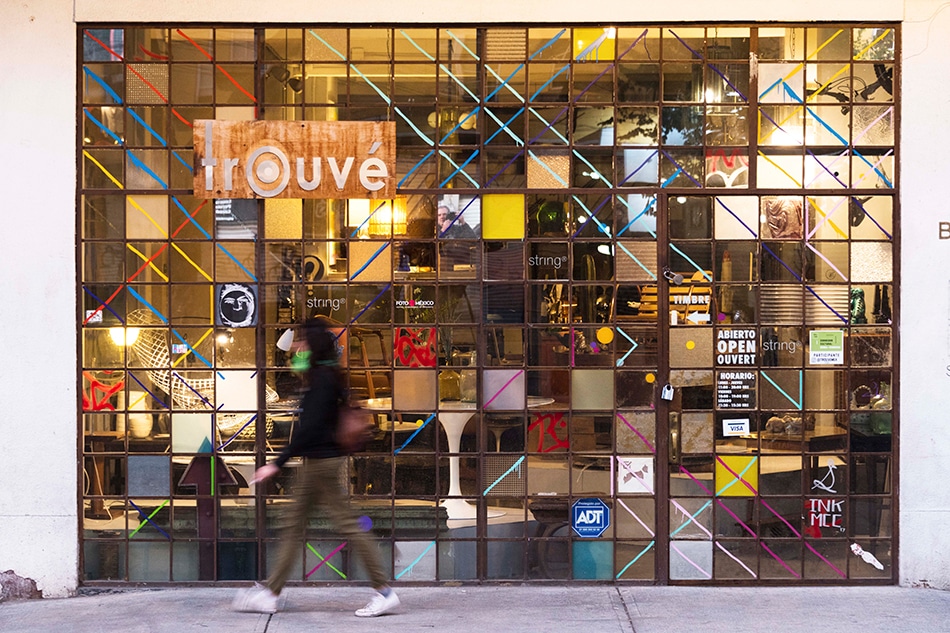 One of Cortina’s favorite Mexico City galleries is Trouvé, a specialist in vintage design and furniture located in the hip Roma Norte neighborhood. 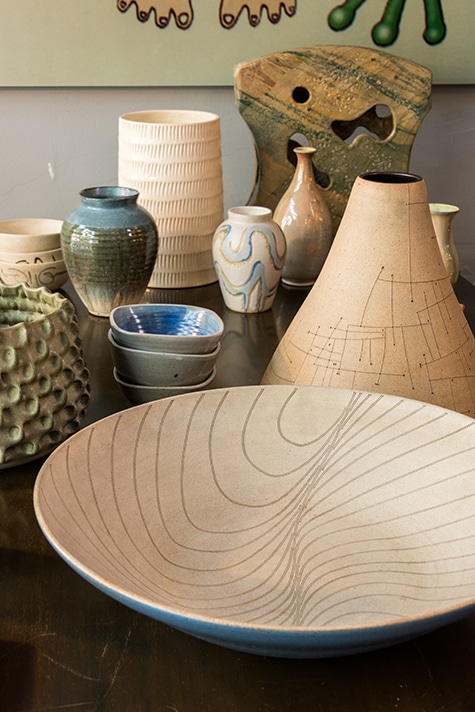 At Trouvé, a table displays an assortment of ceramic pieces. The bowl with a blue-enamel exterior, the stoneware vessel immediately behind it and the textured green centerpiece at near left are all by by Gustavo Pérez.

A 20-minute drive later, we arrive at Trouvé, a vintage design and furniture boutique in the hip district of Roma Norte, known for its trendy restaurants and art galleries. We’re greeted by the owner, Javier Carral, an affable antiquarian with a long, sculpted beard whom Cortina has known for years. “Javier brought a kind of eclecticism that didn’t exist in Mexico City,” she says.

As we enter the gallery through the large, glass-fronted door, we pass a wooden table decked with ceramic plates, pots and sculptures, including two beige pieces that immediately catch the designer’s attention. The abstract, organic-looking sculptures fit in the palm of her hand. When asked who sculpted them, Carral confesses, with a twist of his moustache, that he has “no idea!” But Cortina doesn’t mind their anonymity.

She says they remind her of contemporary Mexican artist Gabriel Orozco’s photograph series “My Hands Are My Heart,” in which he is seen pressing his fingers into a lump of soft clay, moulding it into the shape of a heart. Cortina declares that she has the perfect spot for the pair: a Vincenzo De Cotiis table in her client’s living room that needed dressing up.

As we get ready to leave, we find a mid-century wooden daybed at the back of the store. “Divino!” exclaims Cortina, who started her career in the office of David Ling, in New York, subsequently joining the late Mexican architect Ricardo Legorreta. The piece is by the American modernist furniture maker Charles W. Allen, who lived in Mexico in the 1950s, during the McCarthy era. It has a dark gray cushion and a woven cane back that pivots upward to turn into a shelf. 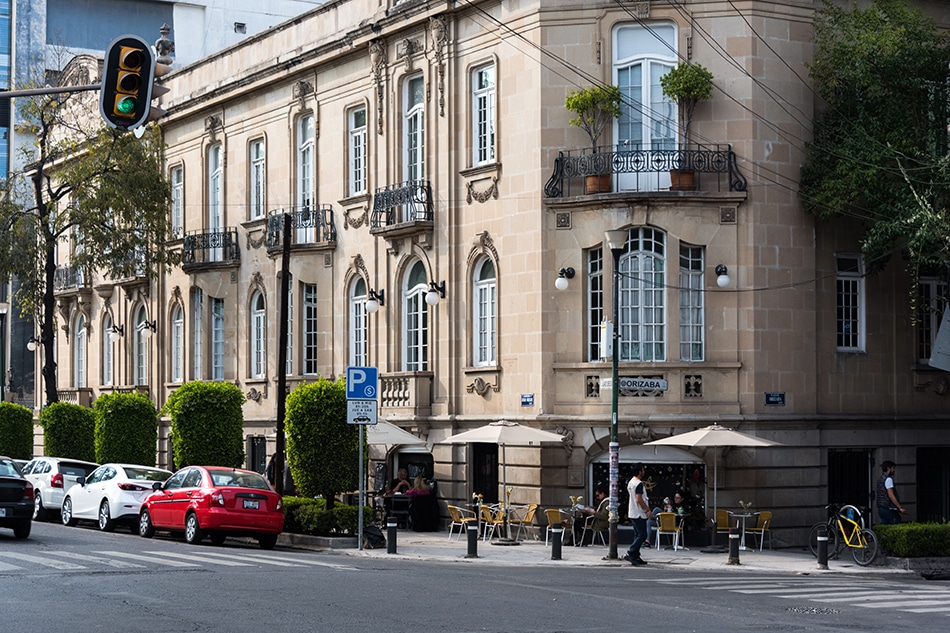 Trouvé is in Mexico City’s Roma Norte neighborhood, known for its on-trend restaurants and art galleries. 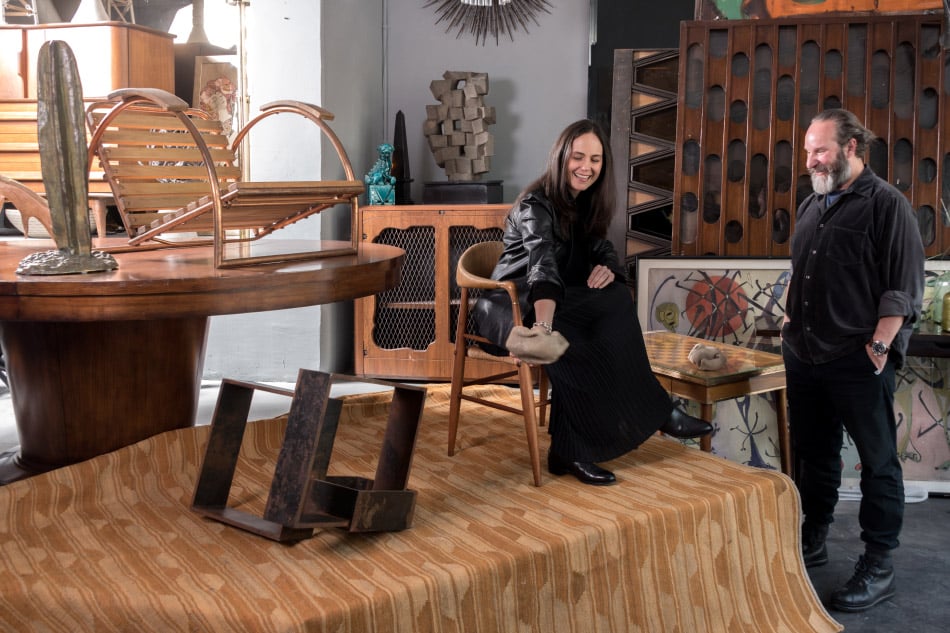 Cortina notes that Trouvé owner Javier Carral “brought a kind of eclecticism that didn’t exist in Mexico City” before he opened his gallery. Here, she admires an organically shaped ceramic sculpture by an unknown artist while sitting in a palm chair in the style of Frank Kyle from the 1960s. 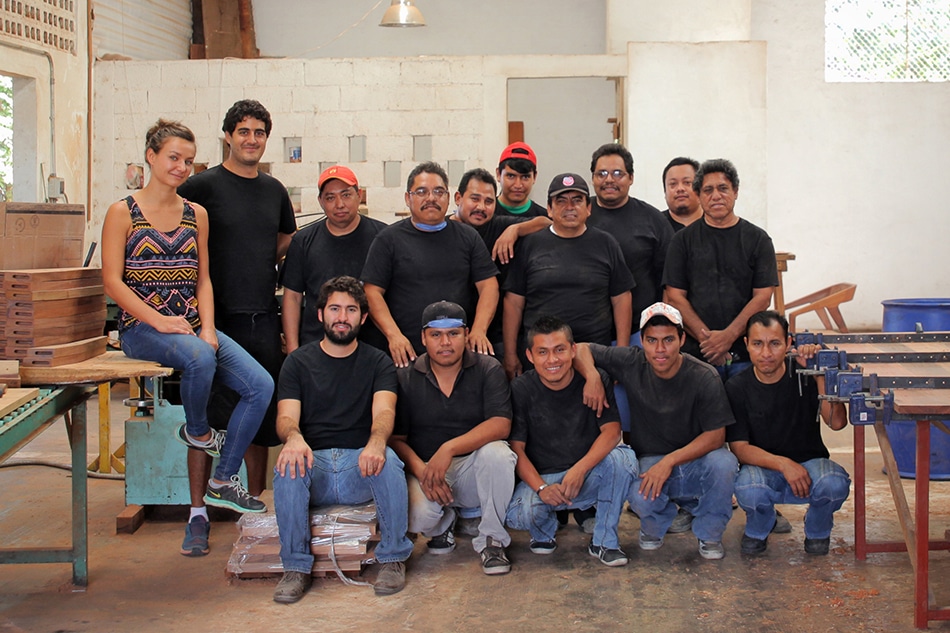 The young designers of ITZ, one of Cortina’s recent discoveries, make furnishings from tropical woods in a workshop in Bacalar, Mexico, not far from the border with Belize. Photo courtesy of ITZ 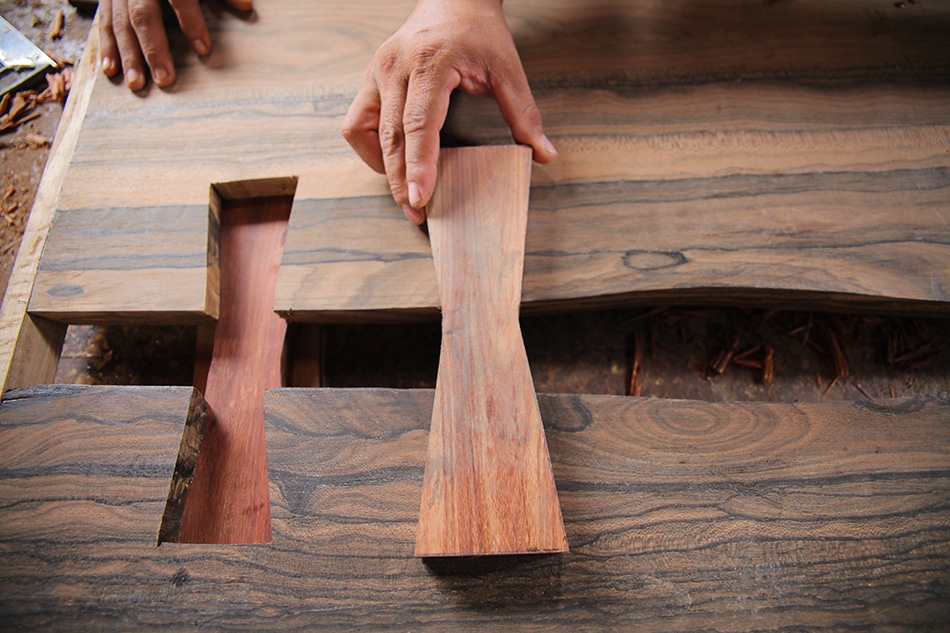 Of ITZ’s intricate wood constructions, Cortina says, “Their pieces can make such a strong statement by themselves but also can balance a space right where you have that missing piece of the puzzle.” Photo courtesy of ITZ 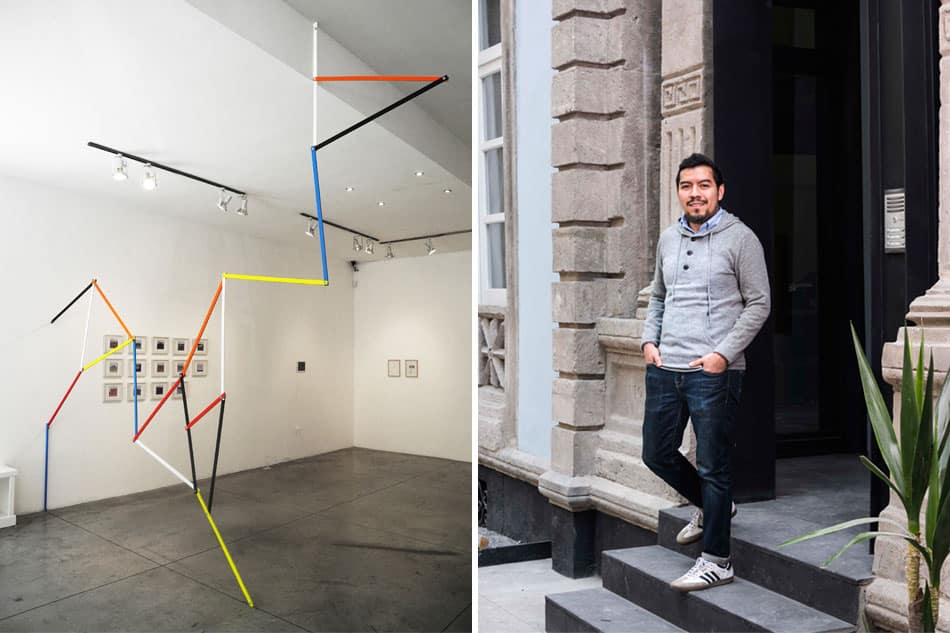 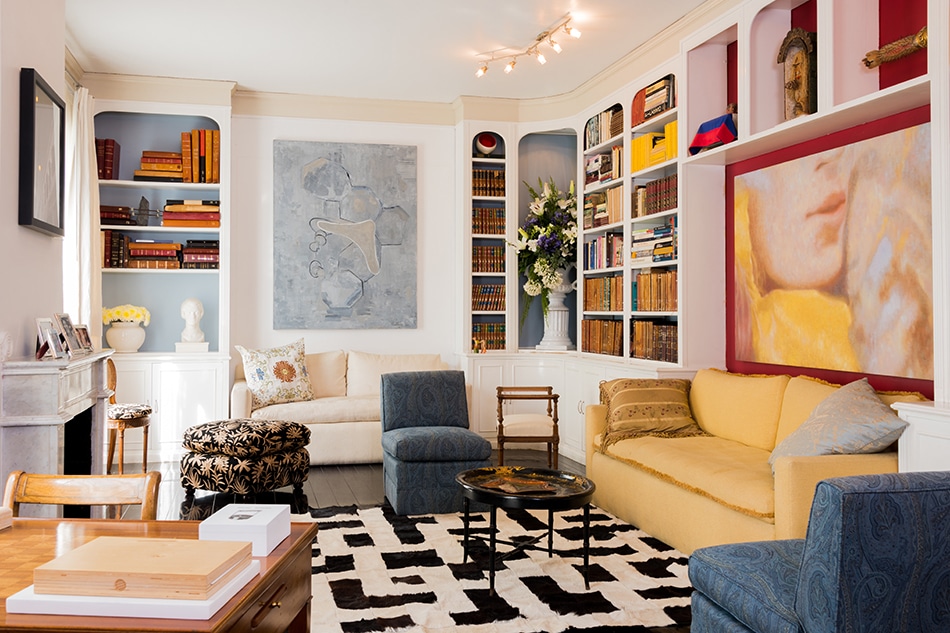 From her home and gallery, Havana-born Nina Menocal deals in contemporary art from Cuba and Mexico, which she shows with 19th-century sculptures, antique furniture and other artifacts from her native country. Mauricio Sandoval’s The Gap, 2014, hangs above the ivory couch. 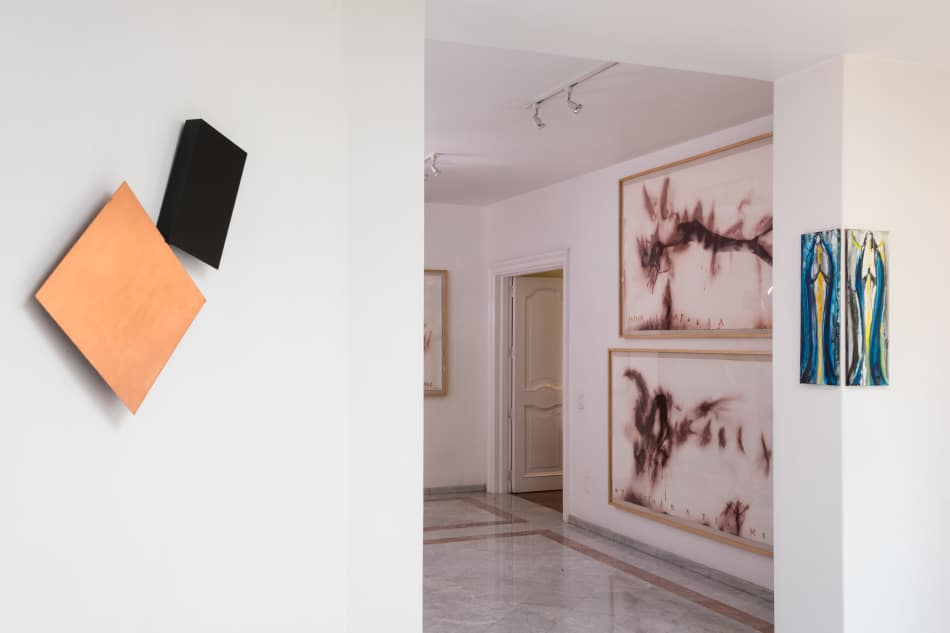 A pair of 2017 works by Cuban-born artist José Bedia, Caprea Cazatoria (top), and Transformatio et Metum (bottom), are displayed on the back wall. His La Guadalupe and Aparación de la Virgen, also both 2017, wrap the corner, while Rosa Brun’s Aman, 2015, a minimalist piece admired by Cortina, hangs on the wall opposite. 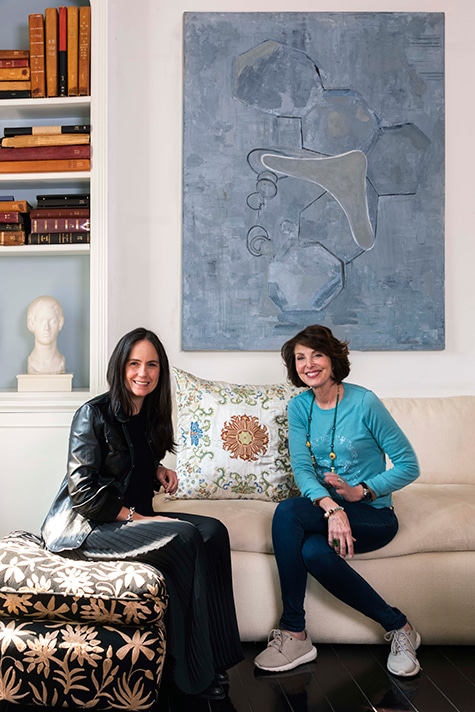 Cortina poses with Menocal in the cabinet of curiosities that is her home-cum-gallery. “Good art always goes well together,” says Menocal, referring to her catholic collecting and decorating choices.

For Cortina, design and art clearly go hand in hand. So, it comes as no surprise that our next destination is contemporary-art dealer Nina Menocal’s home and gallery space, back in Lomas de Chapultepec. The collector and gallerist greets us with an exuberant “Bienvenidos,” pronounced with a distinctive Cuban accent. Born in Havana, Menocal left her native island as a young girl after Fidel Castro came to power. She rose to prominence in the Mexican art scene in the early 1990s by introducing the work of contemporary Cuban artists, including the late Félix González-Torres, to her host country.

Her impeccable home (which is open to visitors by appointment) is like an exquisitely curated cabinet of curiosities. Filled with contemporary paintings, 19th-century sculptures, antique furniture and Cuban artifacts, it is a surprisingly coherent blend of old and new. “Good art always goes well together,” she says.

Although Menocal’s collection is dominated by Cuban and Mexican artists (Antonio Gritón, Ernesto Rancaño and María José de la Macorra, among them), Cortina is after a Spanish one: the Madrid-born minimalist Rosa Brun. Menocal has hung Brun’s Aman on a wall in the entryway. Composed of two small wooden surfaces — one a square covered in copper, the other a rectangle coated in black paint — the 2015 work has an obvious appeal for Cortina: The dialogue between the geometric shapes and the way the copper reflects the light seem to echo her Mathias table.

On our way out, I ask Cortina what she thinks about Mexico City’s designation as World Design Capital 2018. “It’s exciting,” she says. “I hope that the world gets to see Mexican design the way I see it.” The country has a long history of creative design — from the Mayan pyramids to the innovative mid-century furniture of Clara Porset to the tech-inspired pieces by the multitaskers at Esrawe Studio. Cortina puts her hope for the future in its latest group of talents.

“I’ve made my mark,” she says. “Now, it’s time for the younger generation to push the aesthetics of Mexican design. To do that, they will need courage and vision — and a receptive audience.” 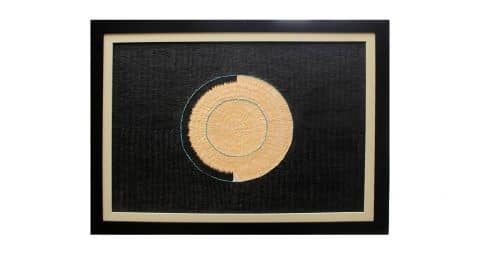 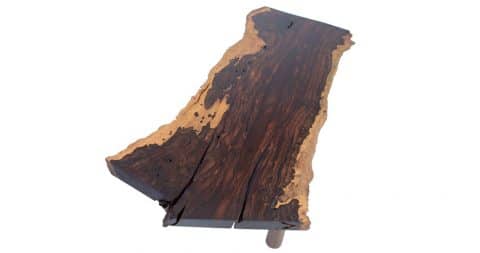 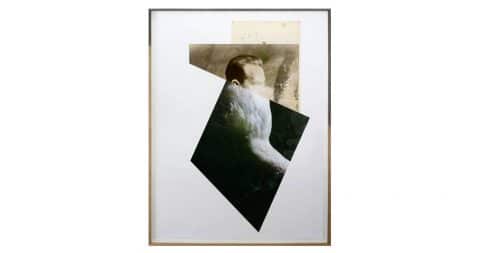 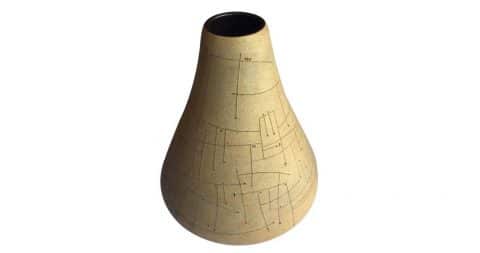 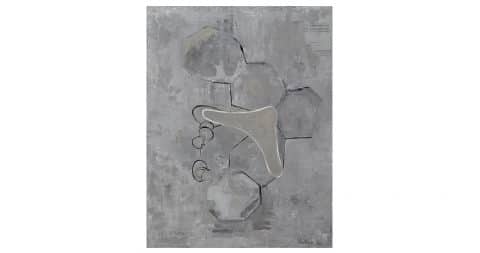 Shop All Mexican Galleries on 1stdibs