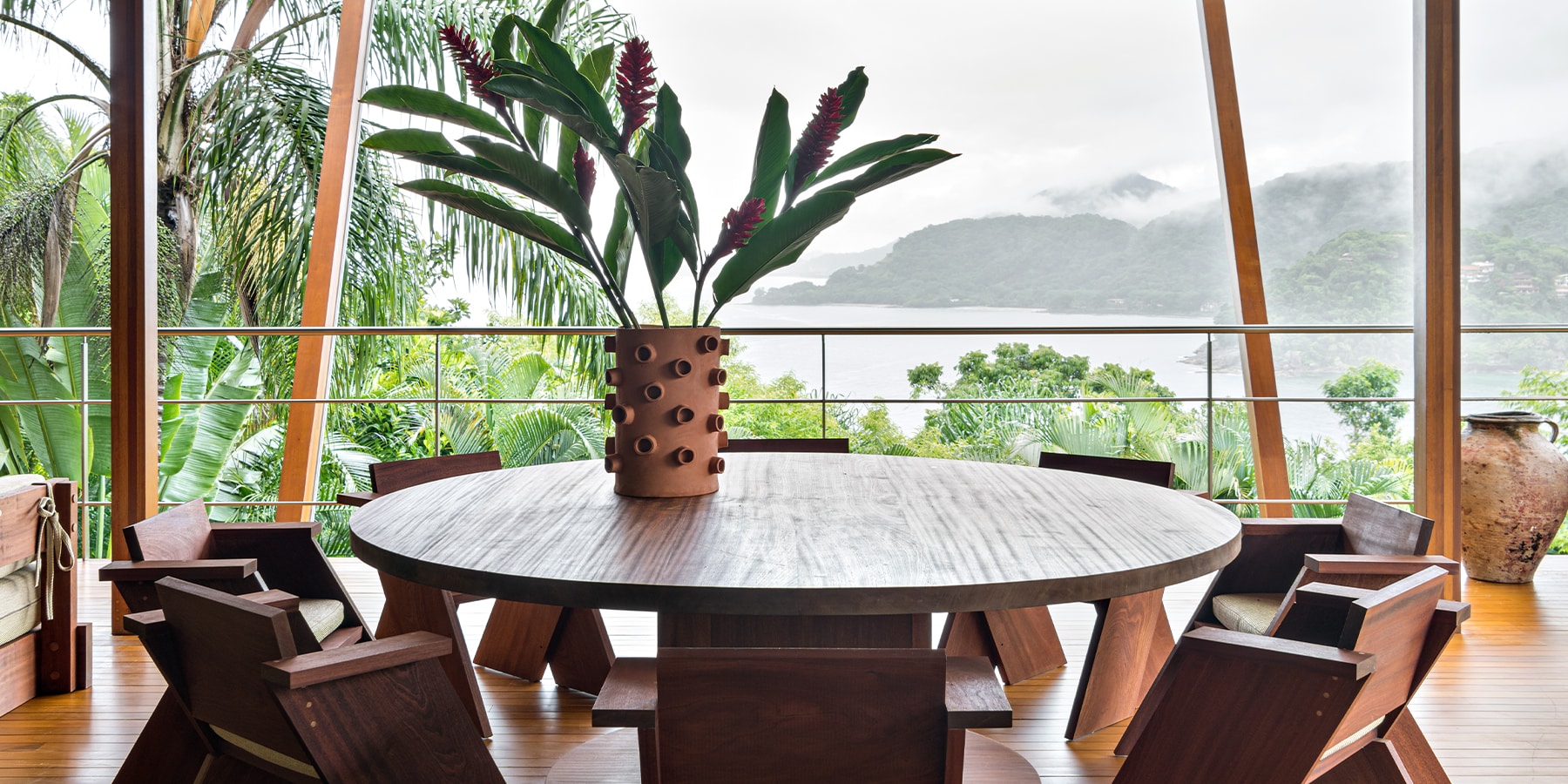 The São Paulo–born, New York–based interior designer has filled this verdant ocean-view aerie with a unique mix of the contemporary and the traditional. 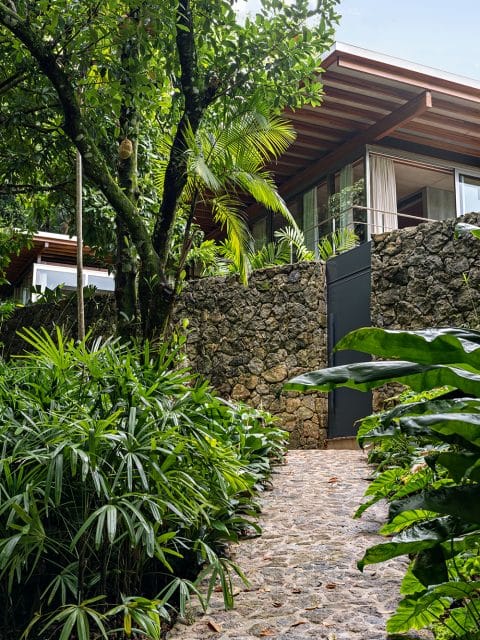 For a house on the Brazilian coast, the New York–based, São Paulo–born designer Andre Mellone conceived decor that blends indoors and out. Top: On the terrace, Pierre Chapo chairs from MORENTZ surround an African-mahogany table by Green River Project. All photos by Fran Parente

Since arriving in New York City 25 years ago, the São Paulo–born designer Andre Mellone has built an enviable career. After stints working for architect Robert A.M. Stern, designer Mark Hampton and the architecture-design studio Sawyer | Berson, he opened his own office in 2013. Now, his Chelsea-based firm, Studio Mellone, is tackling what he describes as a “serious Upper East Side apartment” and “a beautiful penthouse in a Bing & Bing building in the West Village.” He has also become a favorite of fashion designers (among them Jason Wu and Thom Browne, with whom he has collaborated on multiple projects). And he has some high-profile jobs, including updating several Rockefeller Center lobbies. “It’s amazing for me, as a Brazilian designer, to be working on a New York City icon,” Mellone says.

But he frequently returns to São Paulo — where his father, the renowned industrial designer Oswaldo Mellone, still lives. And, occasionally, he visits a beach town about two hours up the coast toward Rio de Janeiro. He spent many childhood summers there, and in the 30 years since he left to study architecture at Syracuse University, almost nothing has changed. 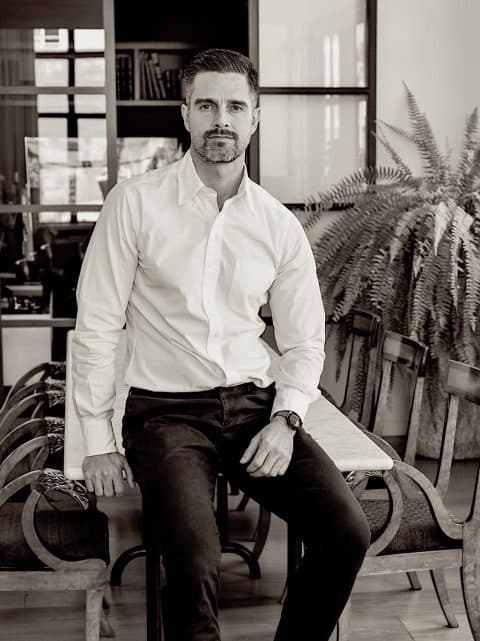 “I call it a very fancy treehouse,” Mellone — who founded his firm, Studio Mellone, in 2013 — says of the home.

He likes it that way, which is why he’d rather not name the town. But he is happy to talk about the house he recently helped create there, at the top of a hill so steep that cars can’t climb it. Most of the building materials — from steel beams to nine-foot-wide glass panels — were carried up the hill by workers. So was the furniture Mellone ordered from around the world. Visitors arrive on three-wheeled motorcycles.

The house was designed by the São Paulo firm Andrade Morettin Arquitetos; Mellone was involved from the start, ensuring that there would be a seamless blend of architecture and interior design. The owners — a São Paulo couple with three young children — wanted to enjoy the area’s jungle and ocean views, which is why they didn’t choose a site closer to the beach. So much vegetation surrounds the building, Mellone says, that “it’s hard to photograph. I call it a very fancy treehouse.” 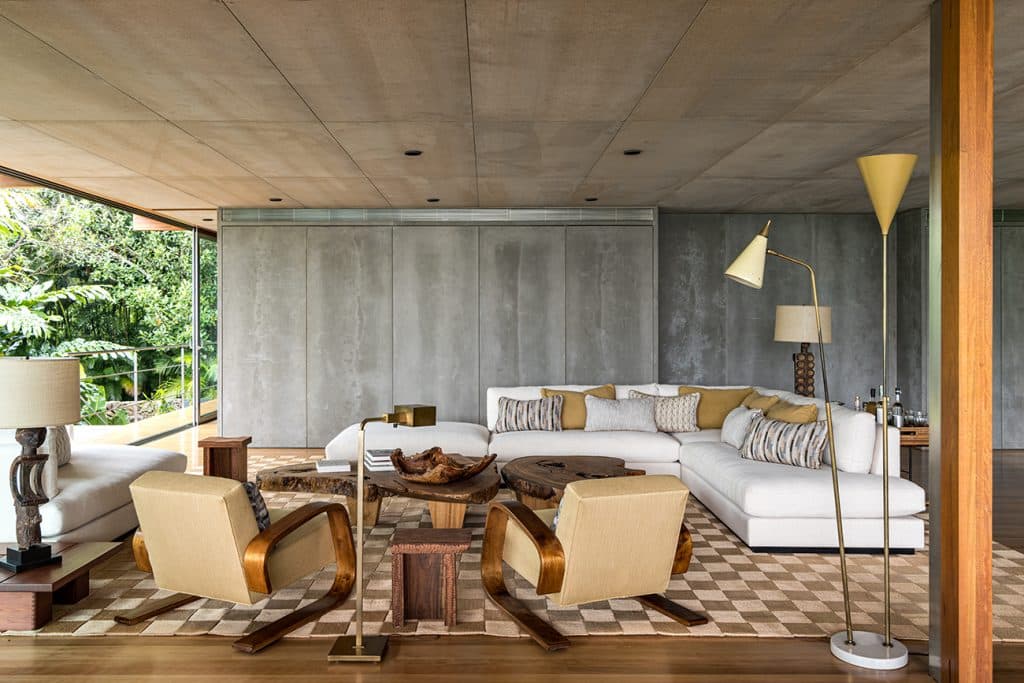 Mellone, who had already decorated a São Paulo home for the same clients, kept the weekend house much simpler. “The instinct,” he says, “was to be a bit more spare, but the individual pieces express the sense of what a special place this is.” He chose those individual pieces carefully: In the living room, for example, he arranged a mix of European and Brazilian furniture on a checkerboard-pattern raffia rug. At the center is a pair of tables designed by Mellone’s father and made from Pequia wood by Tora Brasil. The company, Mellone explains, “combs the Amazon for dead trees — they don’t cut new ones. My father works with them on figuring out where to slice them to make the best furniture. In this case, it was a very old tree that had been dead for ages. When they sliced it, the wood split in two pieces, so it became two tables.” 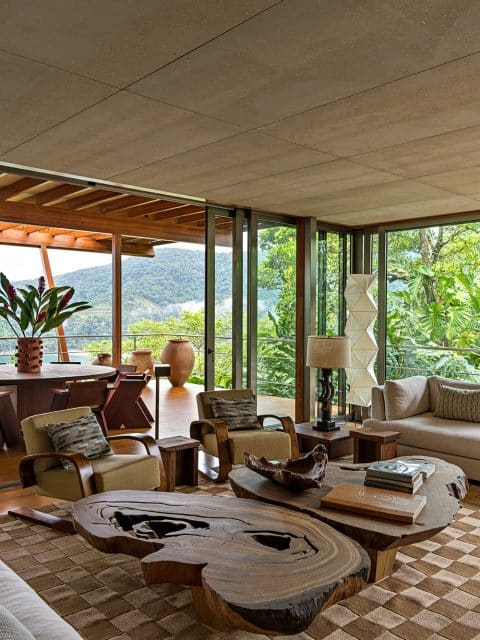 A pair of Alvar Aalto Tank chairs covered in a Prelle linen flank one of a pair of stools by Green River Project. The Brooklyn company was founded in 2017 by sculptor Ben Bloomstein and painter Aaron Aujla to create four furniture collections a year. Mellone thought their elemental pieces would go well with the house’s unfussy architecture.

The furniture is uniformly low; it was important to Mellone that nothing block the views. And it was also important, he notes, that, despite its sophistication, the house feature decor that felt connected to the jungle: “The live-edge tables by my father, the big bowl, the rugs — they’re all part of a story about wood and fiber.”

The side table, by Finnish designer Ilmari Tapiovaara, is from MORENTZ. The two-armed floor lamp is by Giuseppe Ostuni; Mellone bought it from Modernario. The shorter reading lamp, by Chapman, is from the Albert Joseph Gallery. The table lamps are African sculptures that Mellone repurposed. The upholstered pieces were custom designed. 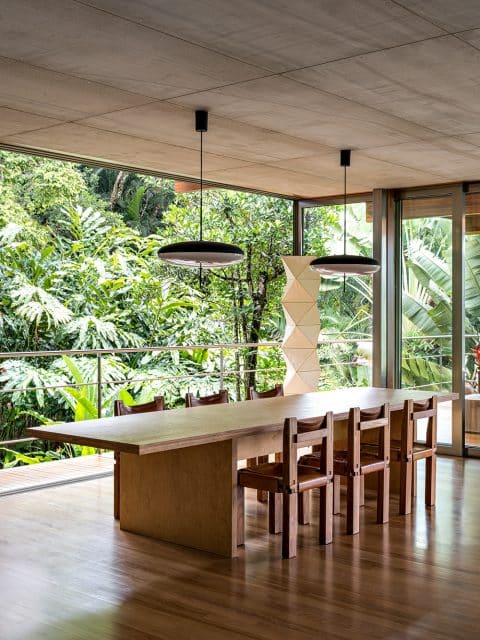 Mellone bought a dozen Pierre Chapo chairs for the house, also from MORENTZ, and several appear here, surrounding a custom table from Green River Project. A pair of Gino Sarfatti pendants hang over the table. The paper lantern is by Isamu Noguchi.

Explaining his careful arrangements, Mellone says, “The architects gave us a big open space. We had to create the rooms with furniture.” To do that, he needed to devise cohesive groupings. “For me, there is a common thread between the work of Green River Project and Chapo and the African sculptures and the Balinese furniture,” Mellone says. “They seemed to fit together.” 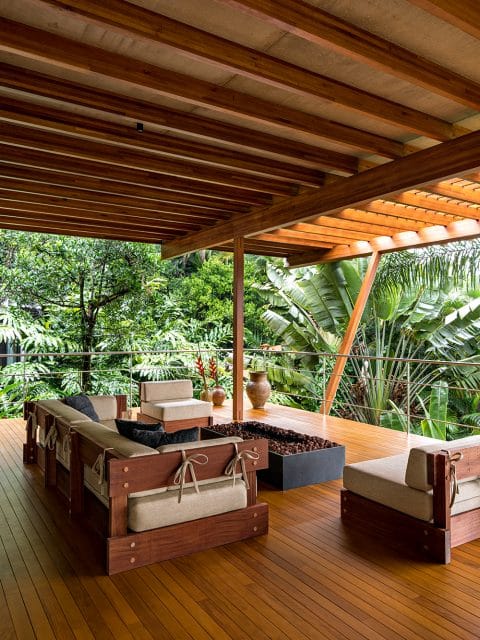 The interior spaces open onto a huge covered terrace, which Mellone outfitted as if it were a second living/dining room. The designer admires the architecture, which encourages indoor-outdoor living. “The sliding doors are closed only when it’s raining or super-windy,” he says. The canopy over the porch has exposed wood beams that  inspired Mellone to choose the Green River Project furniture. “I thought how incredible it would be to have furniture with the same spirit as the architecture. I see it as a perfect match.”

Mellone had a Green River Project sofa customized — “I asked them to enlarge the frame and to make the cushions a little more substantial.” The upholstery fabric is from Ralph Lauren, and the pillows are by Aïssa Dione, a Senegalese weaver. The sofa faces an outdoor fireplace. “People ask, ‘How can you have an outdoor fireplace under a wooden roof?’ ” Mellone says, to which he answers, “It’s a very low flame.”

The African-mahogany table and chairs are also by Green River Project. The big urn is Spanish. 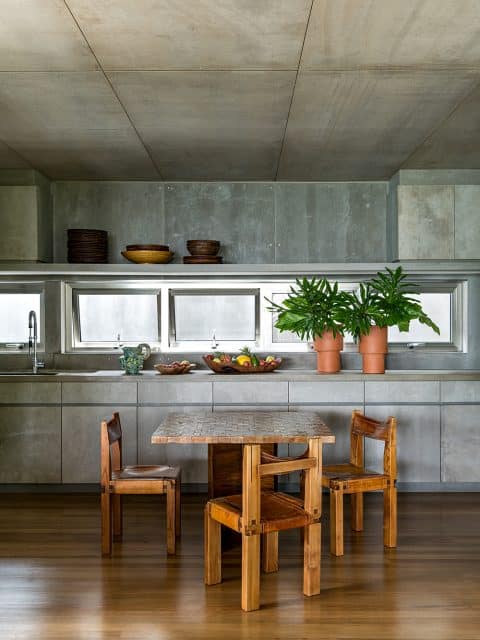 The architects created a monochromatic kitchen; walls and even cabinet doors are made of Viroc, cement board that can be handled like plywood. The clients owned the Brazilian-bamboo table, and the chairs are more of the Chapos. The terracotta vases are by Paula Greif; the ceramic pitcher is by artist Bela Silva. 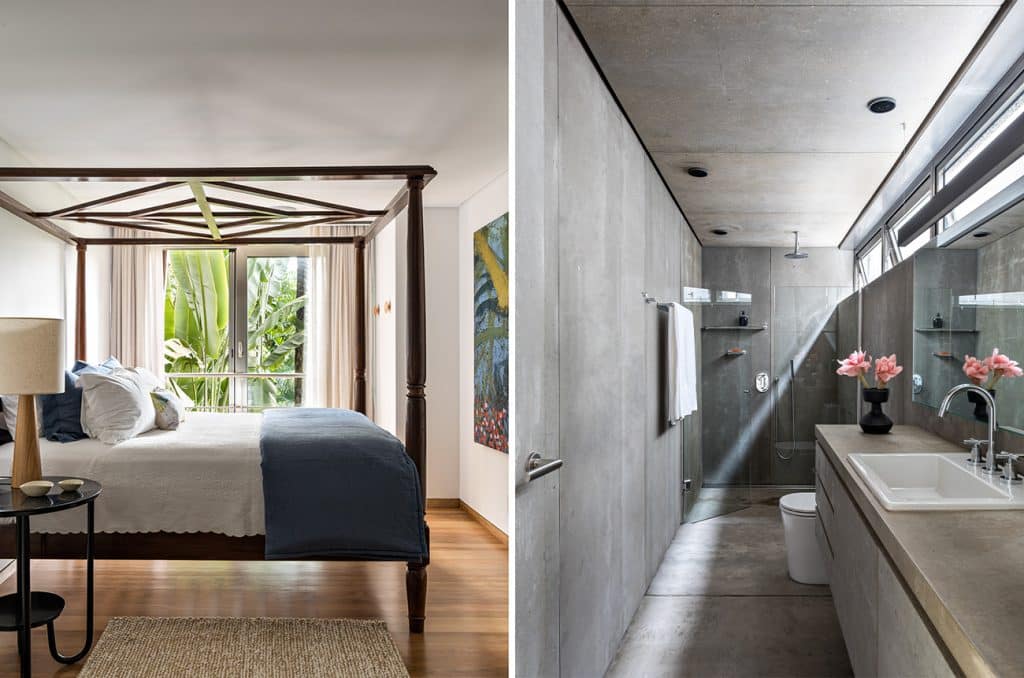 Mellone and his clients wanted to keep the master bedroom simple. The clients already owned the Balinese four-poster bed, as well as the metal bedside table and ceramic lamp. The linens are Brazilian. “There’s sisal on the floor, and that’s basically it,” Mellone says. The bathroom is almost entirely poured concrete and Viroc. “The architects conceived the house to be a bit raw and modern, almost industrial,” says Mellone, “and the clients love it.” 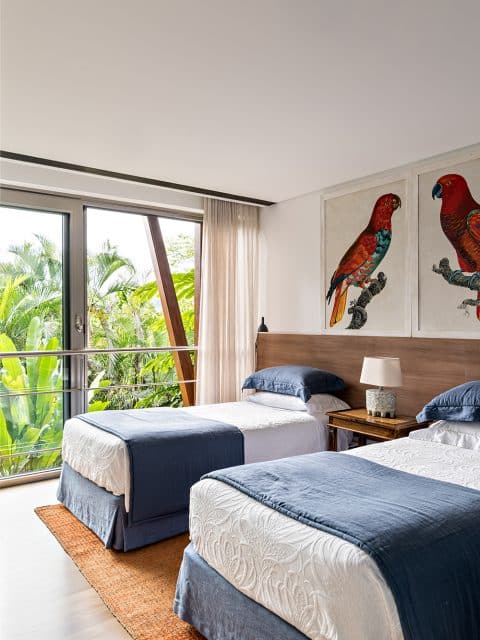 The local firm NC Projetos worked with Mellone to design and execute the bedrooms. To give the guest room a tropical look, Mellone chose a pair of watercolors of red macaws, a sisal rug dyed a light terracotta and embroidered Portugese-Brazilian linens. The small table is Balinese. 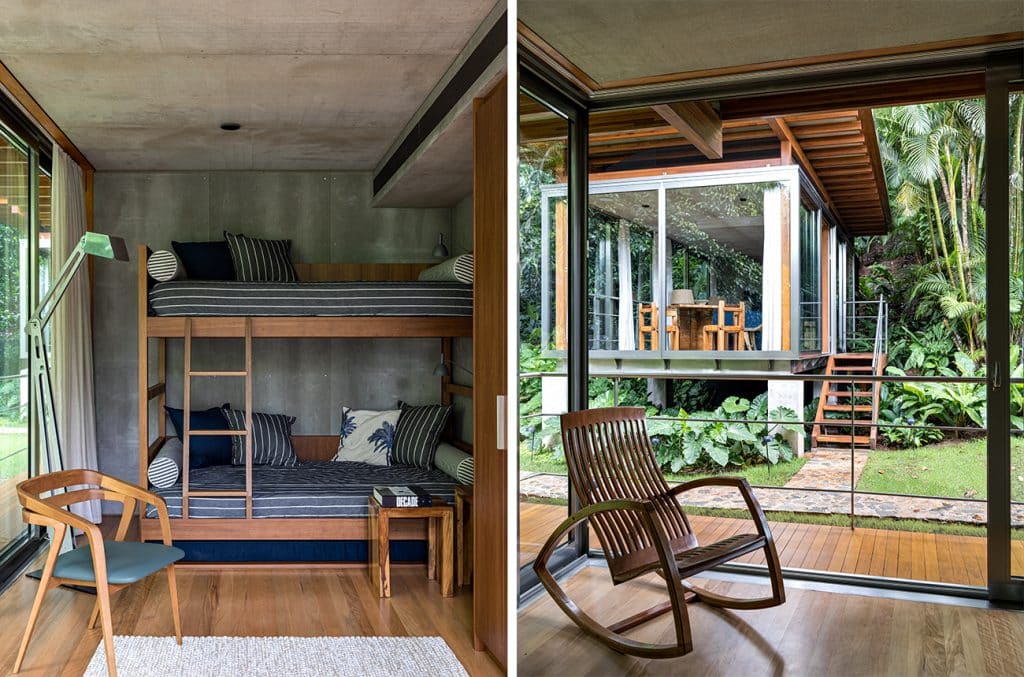 The house has a pair of bunkrooms for the family’s three children and their friends, which Mellone designed with NC Projetos. The rocker is by Renzo Bonzon. Behind the rocker is the children’s pavilion; the architects conceived it as a freestanding playroom, a refuge for the kids. The game table, surrounded by more Chapo chairs, is a duplicate of the Brazilian-bamboo kitchen table. 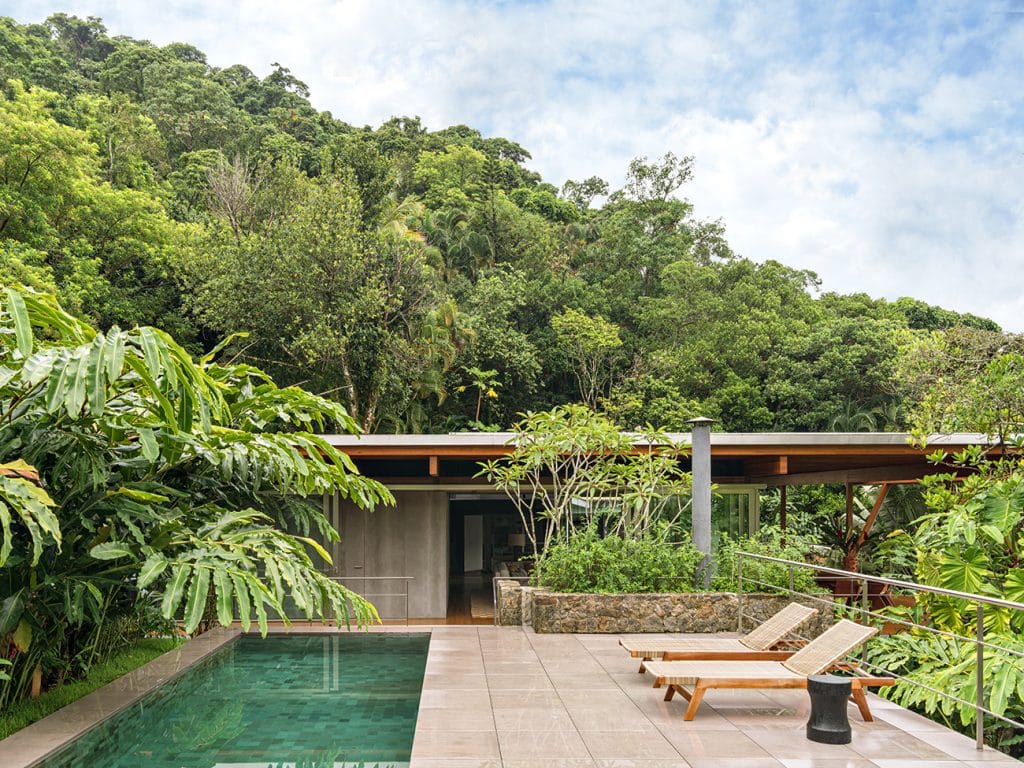 “We wanted everything to feel very informal — but chic and cool and resort-y,” Mellone says. The pool is lined in volcanic stone, while the surrounding deck is limestone. The chaises are locally made, but the occasional table is by Christian Liaigre. Who puts a Liaigre table outside in the jungle? Clients that are “very sophisticated about design,” says Mellone, adding, “They wanted to do something serious. Luckily, and good for them, they had the means to do it.”

Get the look with items handpicked by Andre Mellone 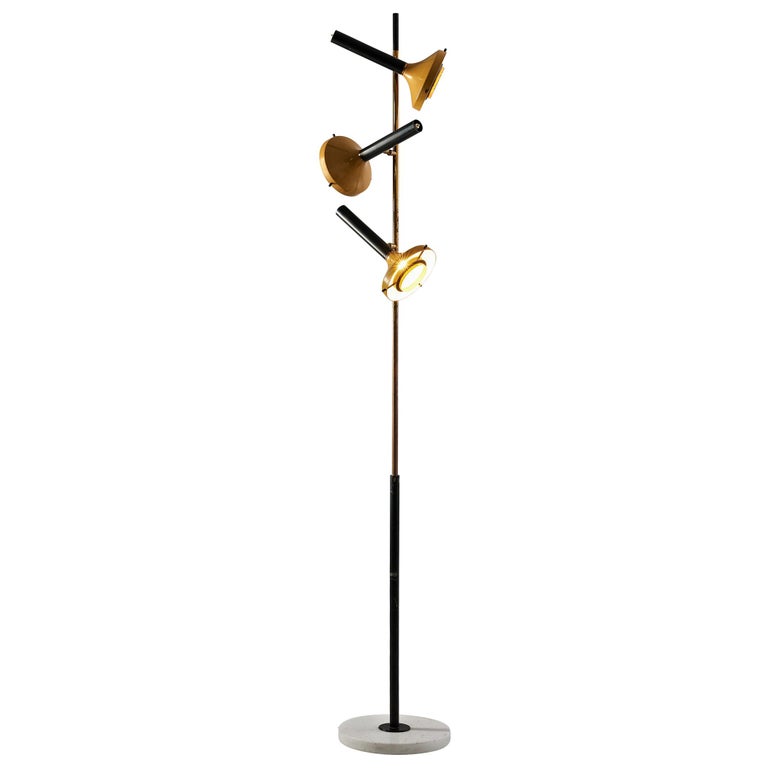 Shop Now
Oscar Torlasco floor lamp, 1950s, offered by MORENTZ
“No one has ever done better floor lamps than the Italians in the fifties — they have great design, functionality and craftsmanship, and they’re a great way to accent a room.” 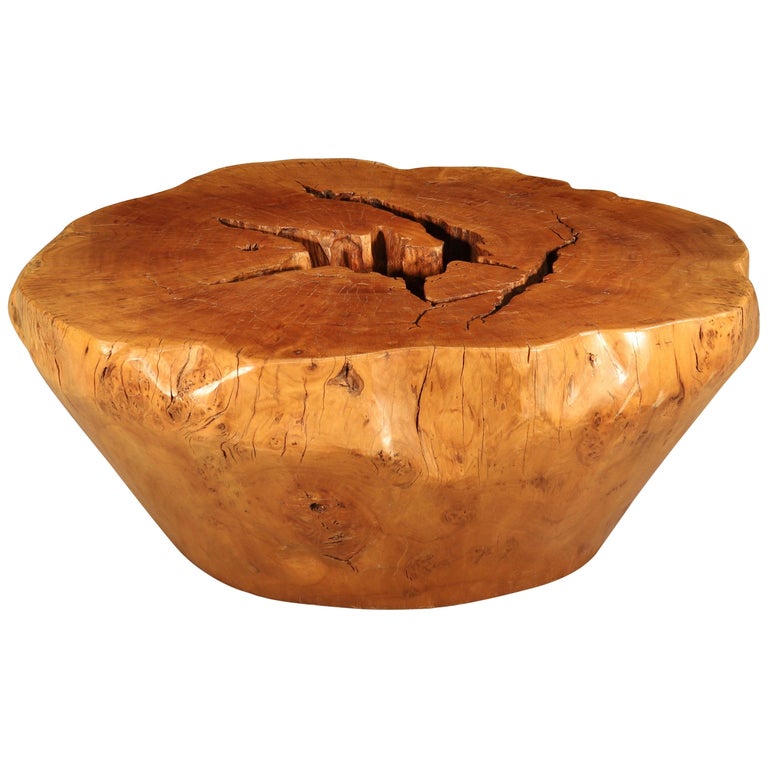 Shop Now
Hugo França Itajaí coffee table, 2005, offered by Dobrinka Salzman
“I’m a big fan of Hugo França’s live furniture. There are many examples of these types of design, but I can’t think of anyone who gets the sculptural quality of wood quite like he does.” Shop Now
Walter Lamb table, 1950s, offered by JF Chen
“I love the simplicity of the design of this table and the fact that the frame is solid bronze, so it gets that beautiful patina. It’s one of my favorite piece of exterior furniture, but I wouldn’t hesitate to use it indoors as well.” 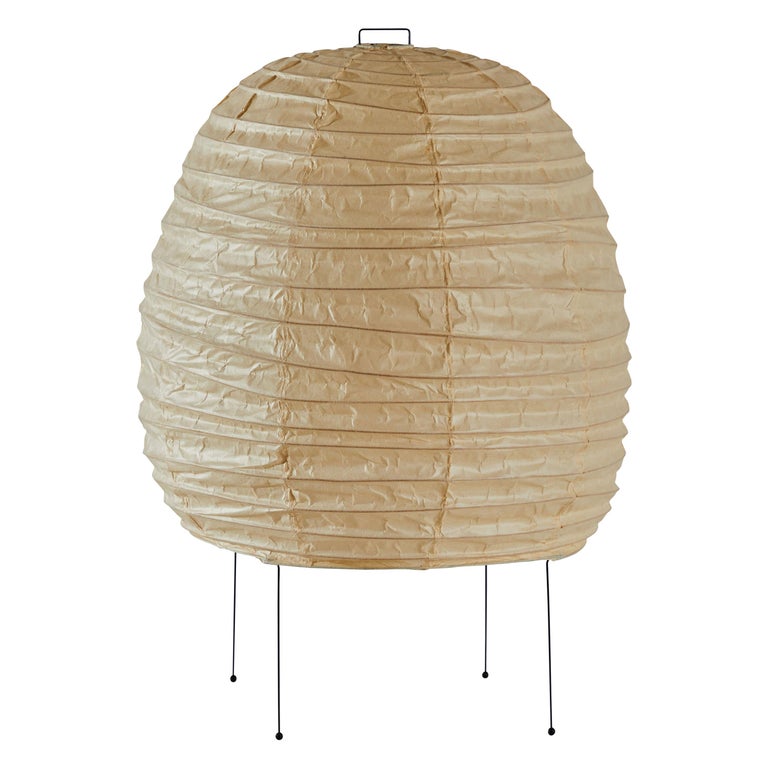 Shop Now
Isamu Noguchi for Akari table lampe, 1950s, offered by rewire
“Noguchi lanterns go with any type of interior. If you can get an old weathered one, even better.” 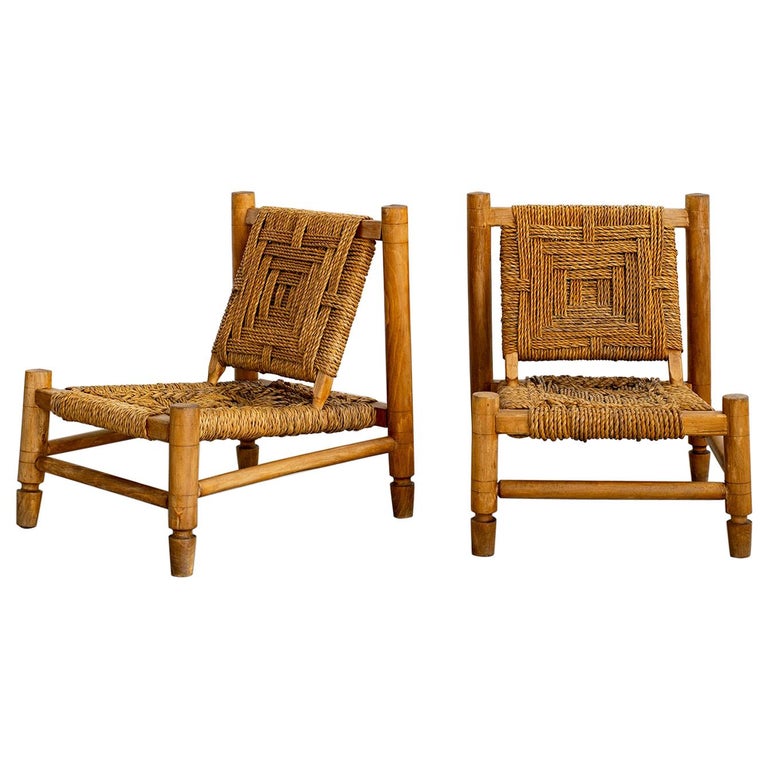 Shop Now
Adrien Audoux and Frida Minet chairs, 1950s, offered by Orange Furniture
“I’m very into anything in wicker or rope, especially in a beach setting.” 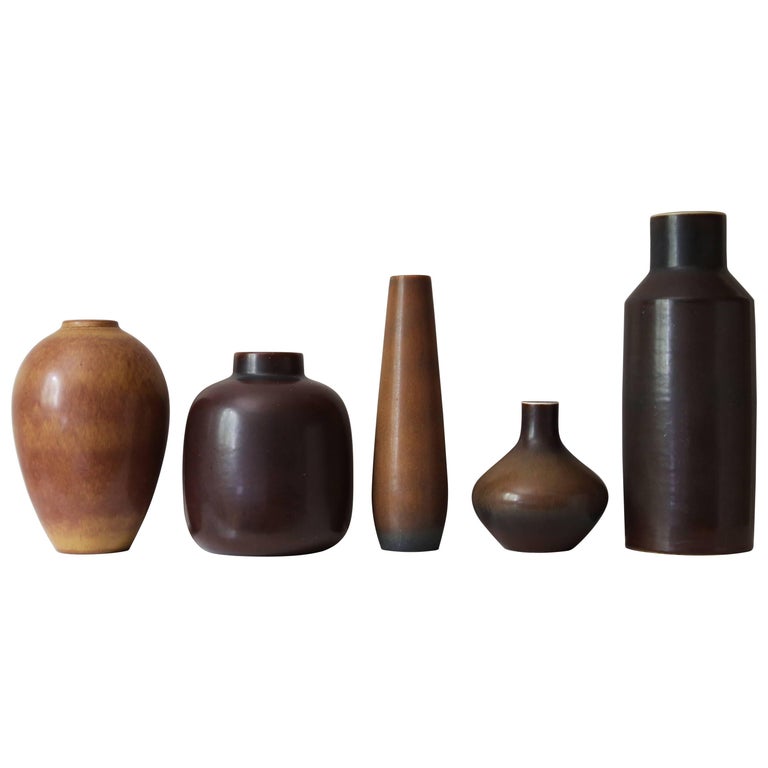 Shop Now
Carl-Harry Stålhane and Gunnar Nylund for Rörstrand vessels, 1950s, offered by the Exchange Int
“I discovered the work of these nineteen fifties Swedish ceramists during one of my many sleepless nights browsing 1stdibs. I’ve started buying some of their small dishes. The work is beautiful.” 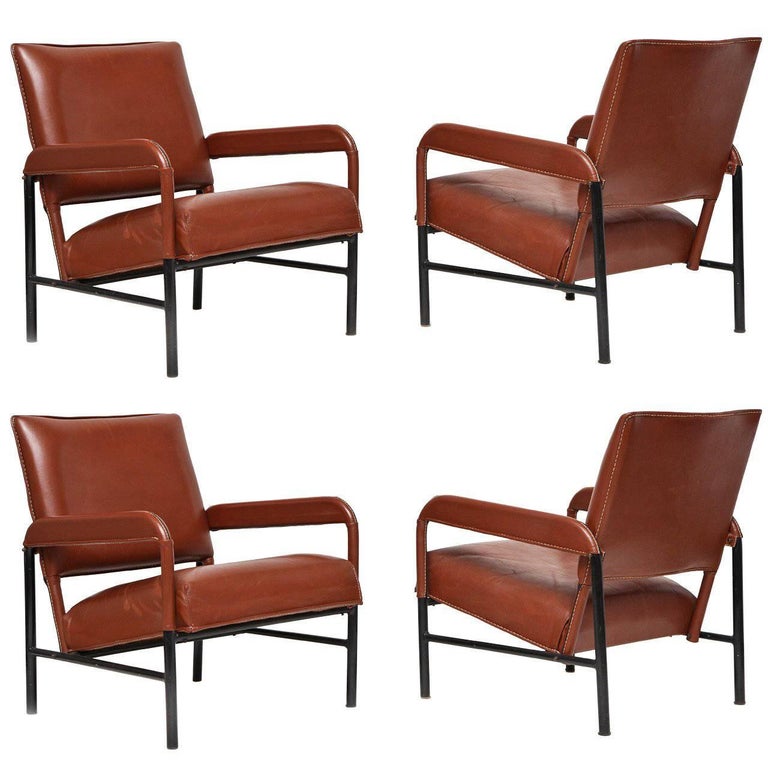 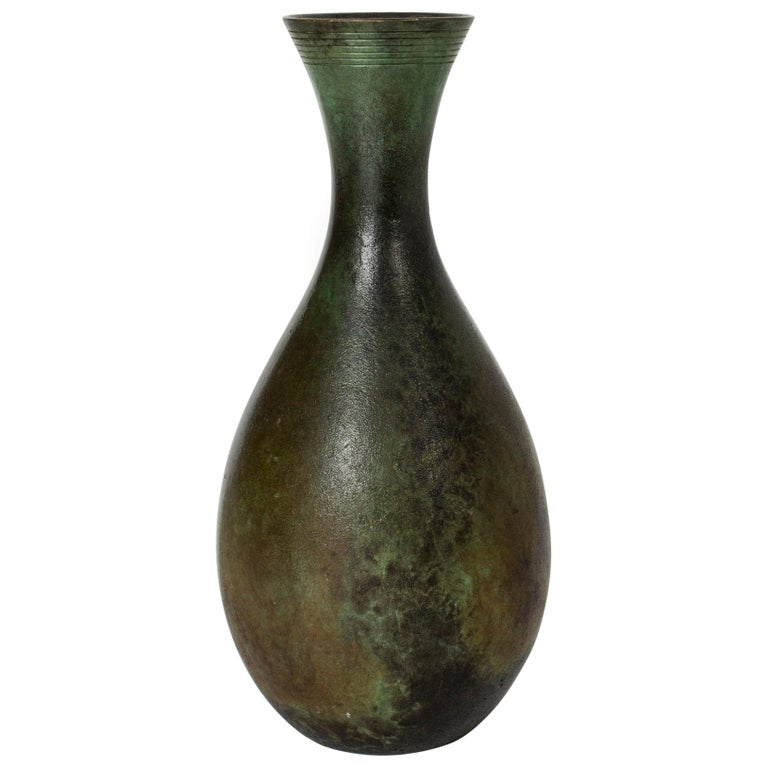 Shop Now
GAB Guldsmedsaktiebolaget vase, 1930s, offered by Nordlings
“I can’t get enough of anything in solid bronze that shows patina, and anything from GAB.” 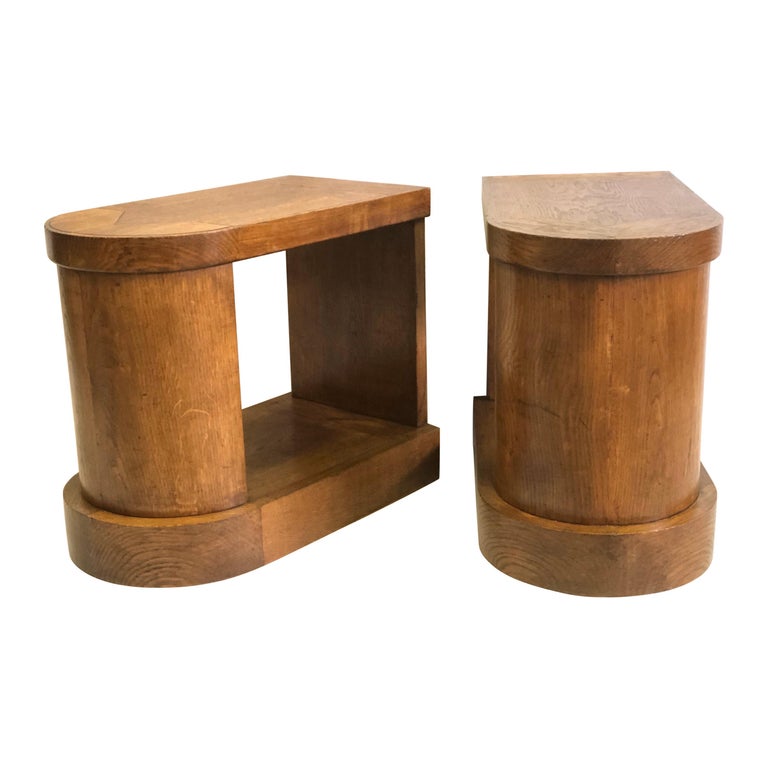 Shop Now
Pierre Legrain end tables or nightstands, 1925–30, offered by Thomas Gallery Ltd
“I’m really into the shape and proportion of these. I particularly like furniture that’s designed in a way that expresses simple geometric forms.”