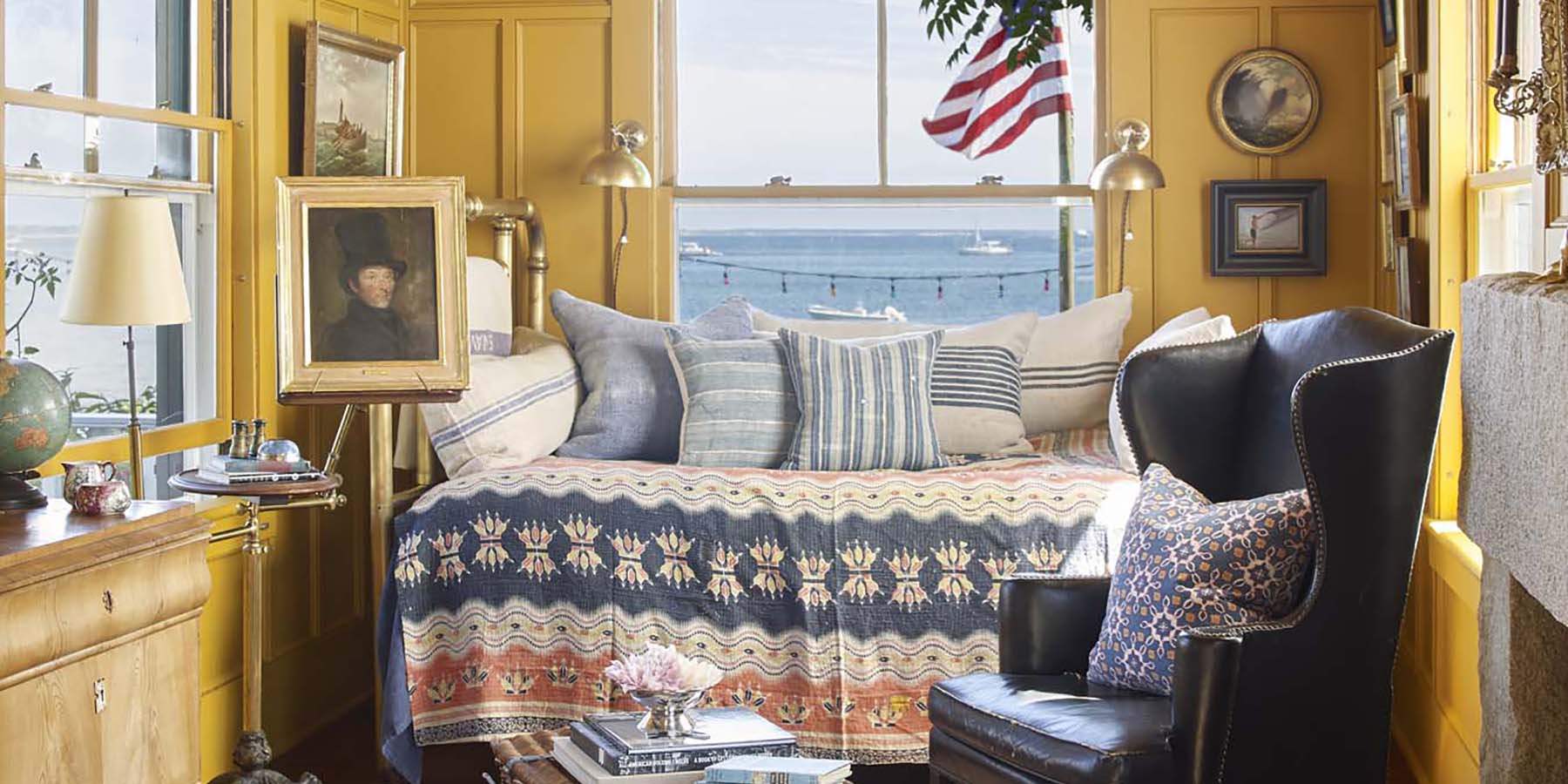 Inspiring Interiors Meet Endless Vistas in These Houses by the Sea

From sleek and modern to eclectic and historic, a new book celebrates the magic of East Coast summer retreats.

Summer is a time of year, a state of mind and — for some families — a chance to enjoy a house by the sea. If it was built within the past 60 or so years, the house may have walls of glass, allowing inside and outside to mingle. If it’s older, it might be more about enclosure than exposure.

Tom Armstrong, the longtime director of the Whitney Museum of American Art (who died in 2011), and his wife, Bunty, had both kinds of summer houses. For years they vacationed in a Colonial Revival–style manse on New York’s Fishers Island. Inside, it was a “chintz-strewn homage to Sister Parish,” according to a journalist who visited. Accents included prints by John James Audubon and colorful examples of Frederick Carder Steuben glass.

When the house burned down, in 2003, the Armstrongs were determined to rebuild. The views, of the water and of Tom’s manicured gardens, made the site too special to abandon. But this time, the couple decided to go modern, exchanging the tightly cropped perspectives through the Colonial’s old six-over-six windows for IMAX-quality panoramas.

To accomplish that, they brought in architect Tom Phifer, whom they knew mainly as a designer of museums, to create a 4,000-square-foot glass box with the lightness of a gazebo. Phifer assembled the house, designed to be as slim as possible, out of a kit of parts fabricated off-island to his specifications. Interior walls, painted white, are positioned in a way that leaves views through the house uninterrupted. The architecture inspired the Armstrongs to switch to 20th-century furniture, including Ludwig Mies van der Rohe Brno chairs, Isamu Noguchi light sculptures and Florence Knoll sofas. Art by Pat Lipsky, Ilya Bolotowsky, Leon Polk Smith, Richard Stankiewicz, Myron Stout, Arlene Shechet and others completed the sea change.

The new house is itself a kind of artwork — a site-specific sculpture. Phifer made it “a lens that celebrates the experience of light on water,” he says, explaining, “Water intensifies how you experience light and heightens the changes in light through the course of the day.”

The Armstrongs’ home and two dozen others are documented in the new book Summer to Summer: Houses by the Sea (Vendome). Author Jennifer Ash Rudick and photographer Tria Giovan traveled up and down the East Coast looking for exemplary seaside retreats. As to the form a summer house should take, Rudick is agnostic, although she couldn’t avoid memories of her first visit, as an impressionable teenager, to Cape Cod. There, she writes, “every house boasted an exuberant and offhanded mix of armchairs covered in faded chintz, blue-and-white ticking, and loads of wicker. Walls painted in pale blues and greens evoked the sea, while dark-paneled rooms resembled staterooms on nearby yachts. Antiques from different countries and various periods gave the impression of a sea captain’s loot.”

On her reporting expeditions, Rudick was struck by the variety of ways homeowners bring the outdoors in. John Dowd, a renowned Provincetown artist, owns a circa 1820 “three-quarter Cape” located a few blocks from that town’s picturesque harbor. The house was a hodgepodge of styles when he bought it. Dowd, who trained as an architect, set out to “peel away the layers of the unfortunate recent alterations,” he says, adding that, luckily, a neighbor was also renovating, “and going in the opposite direction.” So, as the neighbor discarded antique doors, shutters, mantels and windows and the accompanying hardware, Dowd incorporated them into his increasingly era-appropriate dwelling.

He composed the finished rooms like still lifes, with perfectly balanced tableaux of antiques-store treasures and flea-market finds. Although many items could just as easily be in his Manhattan apartment — a Robert Motherwell print, a marble bust of Shakespeare, a late Federal-style bed — others evoke Provincetown’s history as simultaneously an artists’ colony and a working seaport: a Prior-Hamblin School portrait of a young sailor; an 1835 map titled The Extremity of Cape Cod; and a built-in bed that suggests a ship’s berth, flanked by a nautical-style mirror. Dowd’s large collection of works by Provincetown artists, he says, capture the light that brought painters to the tip or Cape Cod in the first place. His home’s walls aren’t punctured by big windows, but they’re punctuated by works that are redolent of the “extremity” outside.

Just a few blocks away, the San Francisco–based design maestro Ken Fulk and his husband, pianist Kurt Wootton, own a former boarding house that, not long ago, was so decrepit its porch was held up by a car jack. Like Dowd’s house, it faces Provincetown’s main drag, but unlike Dowd’s, its back overlooks the boat-filled Provincetown Harbor. That meant it would seem nautical no matter what Fulk did. True, he didn’t entirely resist seaside motifs — he commissioned Rafael Arana to paint a mural of the harbor in the dining room, and he crafted the library’s ceiling fixture from a salvaged brass boat hatch. But he also evoked other summer venues, from Adirondack camps (a canopy bed from Marjorie Merriweather Post’s Topridge) to stops on the Grand Tour (an elaborately carved guest bed from a Venetian palazzo). Fulk’s summer house is an homage to summer houses. 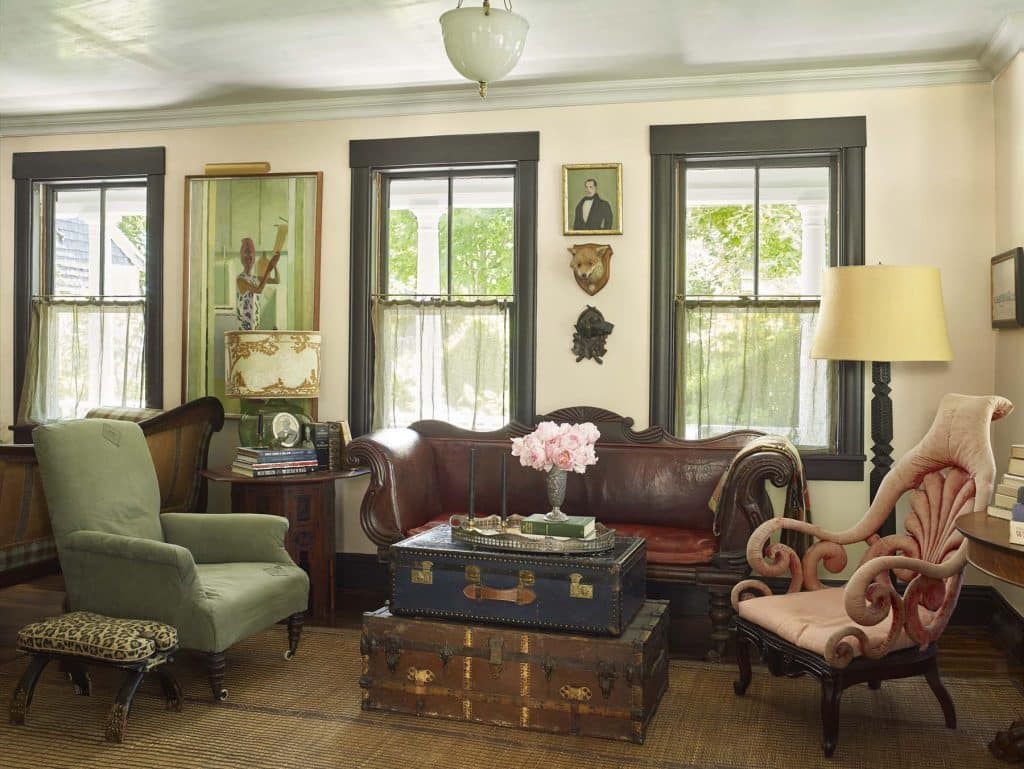 In the living room of Baxter’s Landing, the Provincetown home Ken Fulk shares with husband Karl Wootton, a 19th-century scroll-arm sofa curls up alongside a whimsical 19th-century pink armchair. Underfoot is an antique Khotan rug. 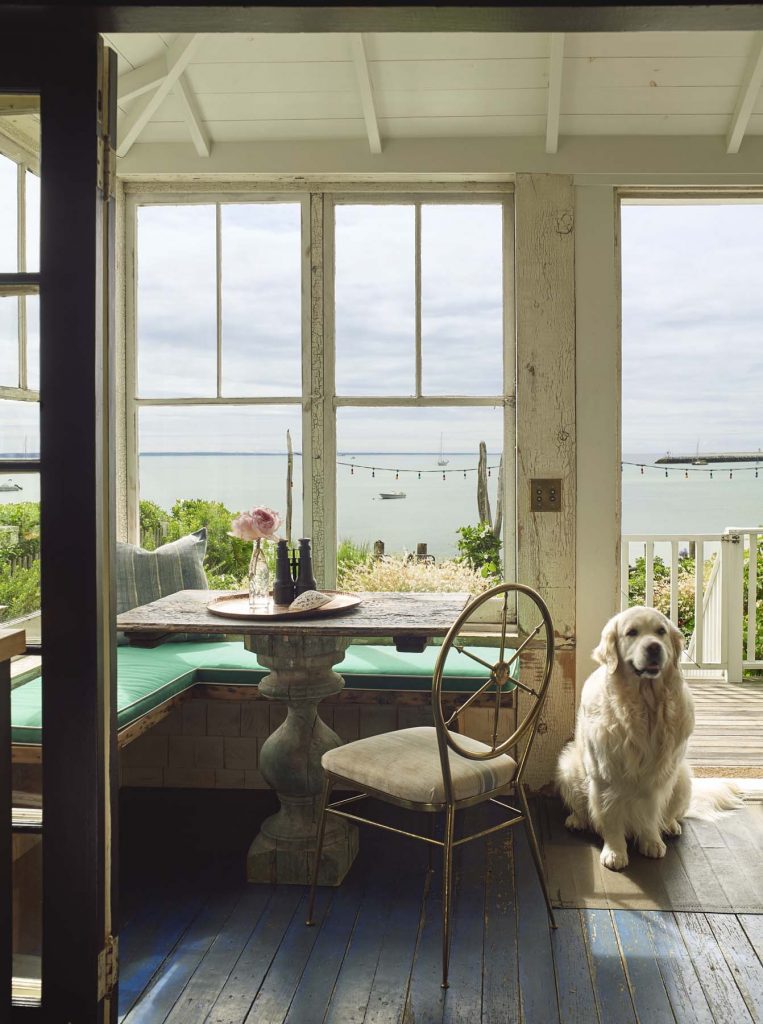 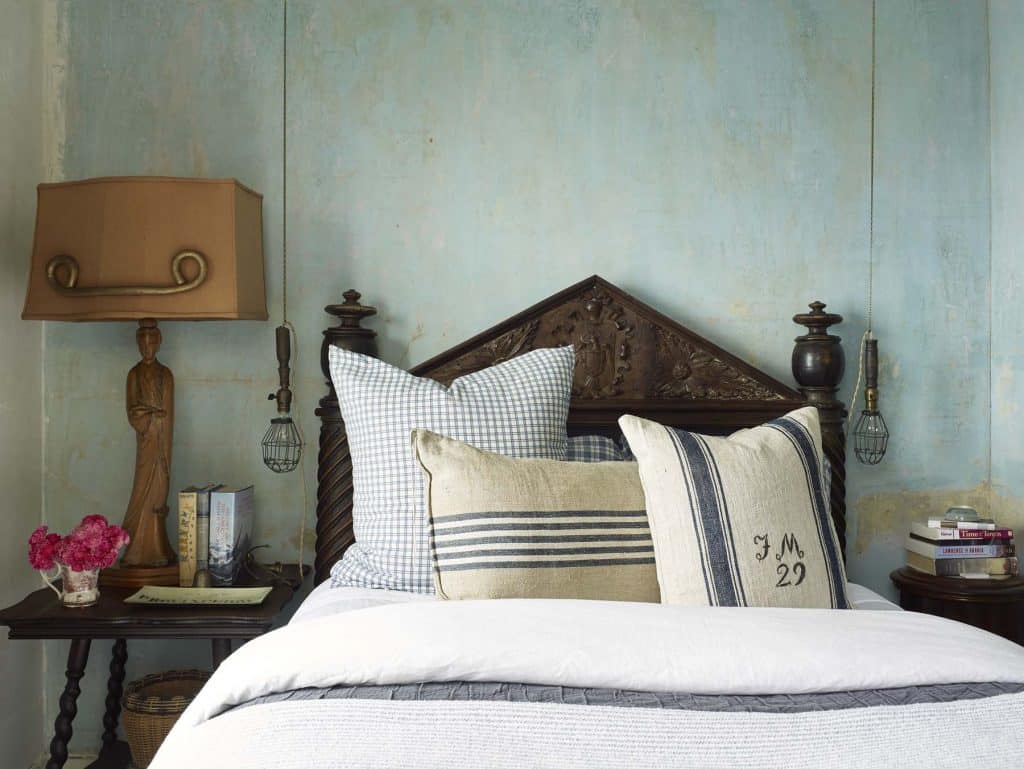 The bed in the guest bedroom, referred to as the Captain’s Room, is from Dodie Rosekrans’s Venetian palazzo and was purchased at auction. 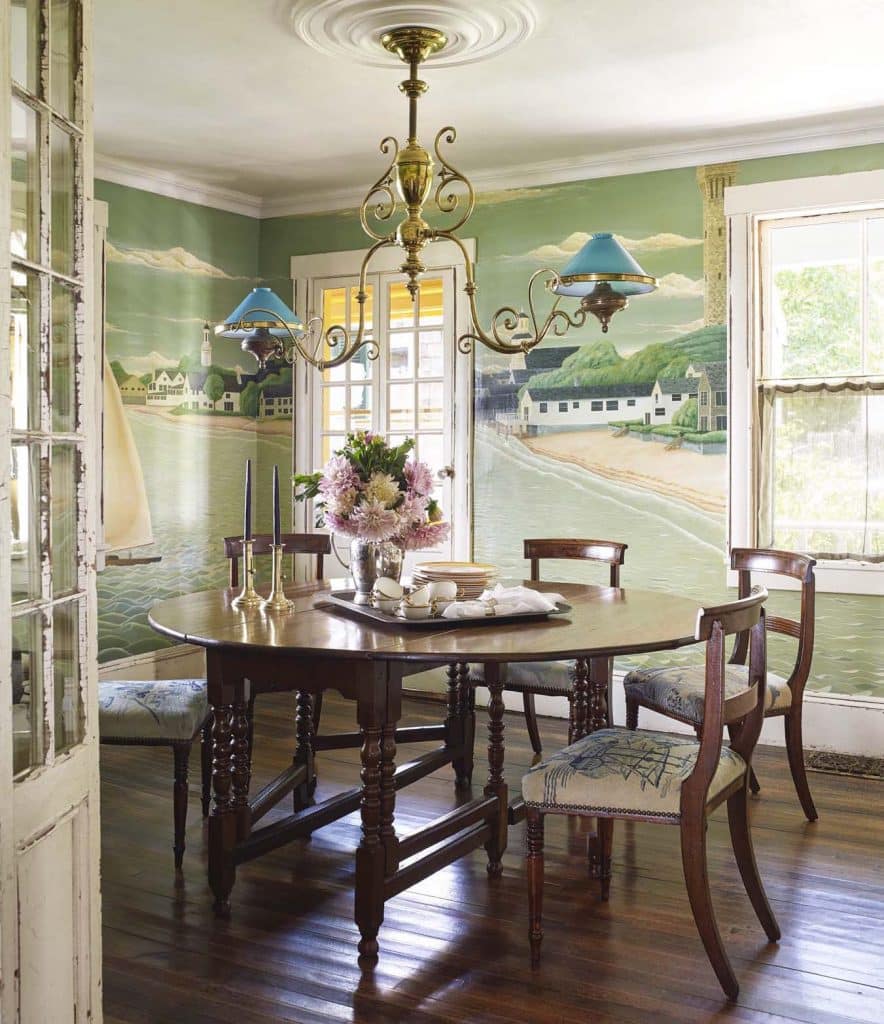 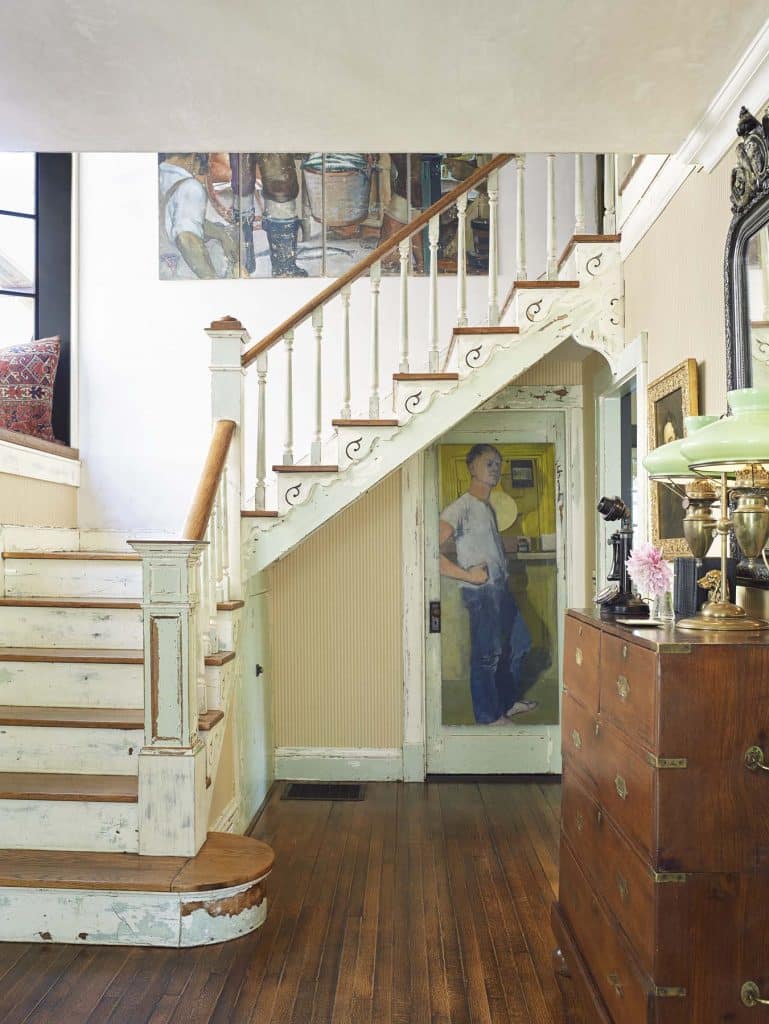 In the entry hall, a self-portrait by Larry R. Collins hangs on the door leading to the powder room. The campaign chest is 19th-century English. 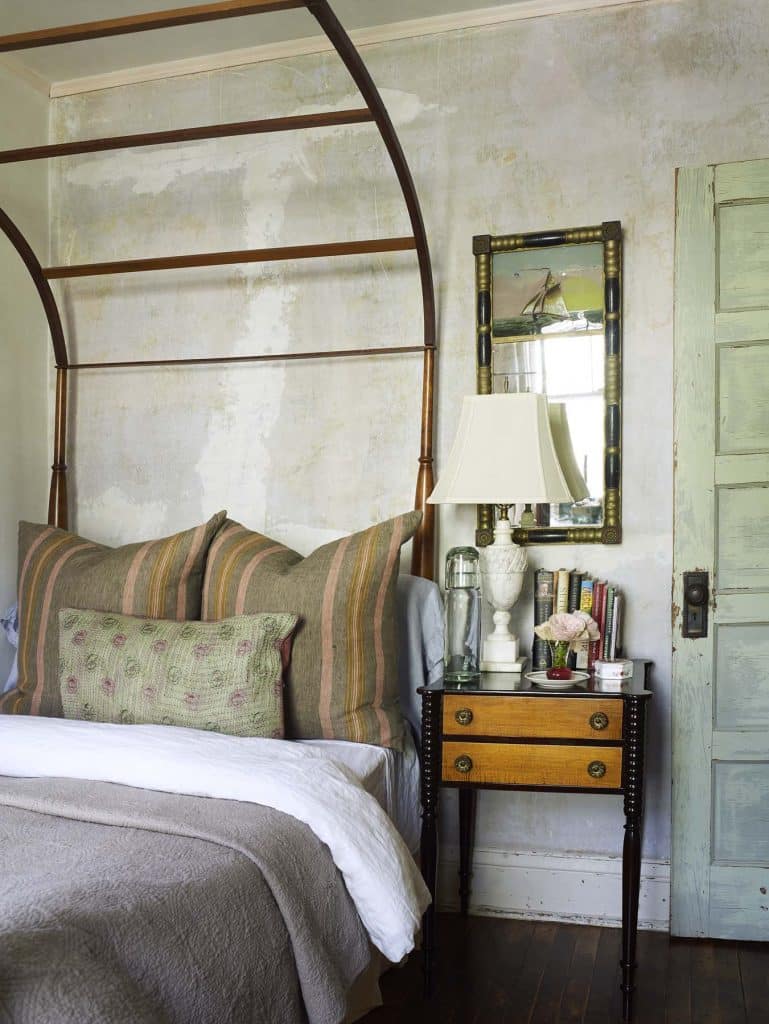 The antique canopy bed in this bedroom is from Topridge, Marjorie Merriweather Post’s Adirondack camp. 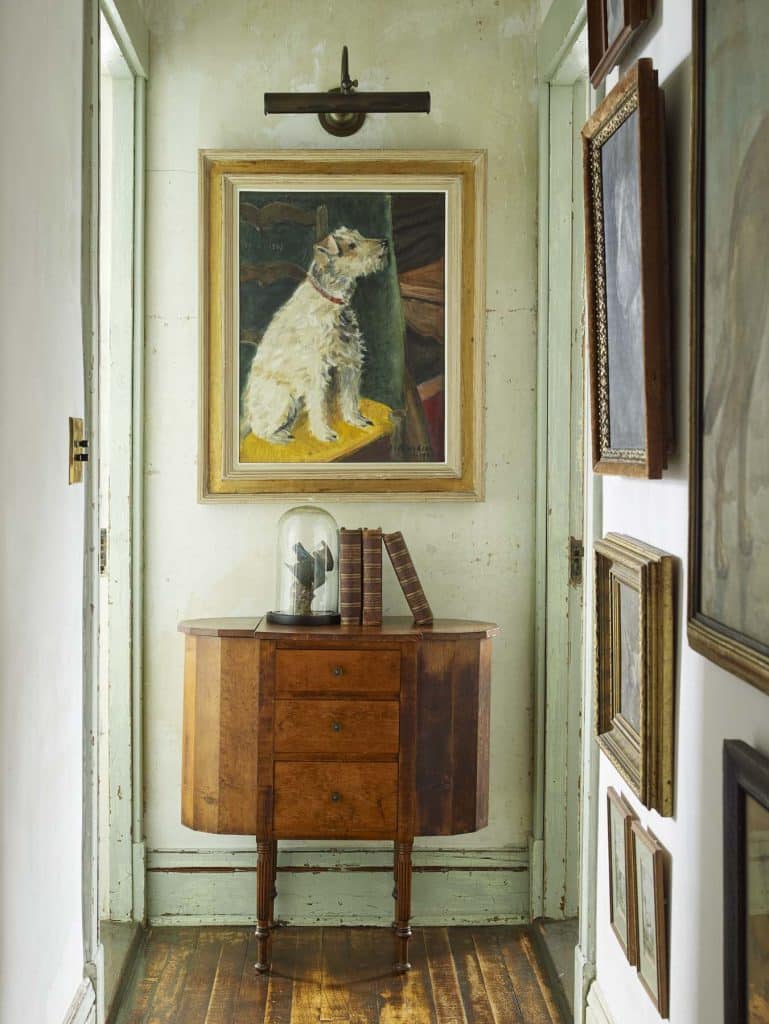 Fulk and Wootton lined the bedroom hall with their collection of dog portraits. 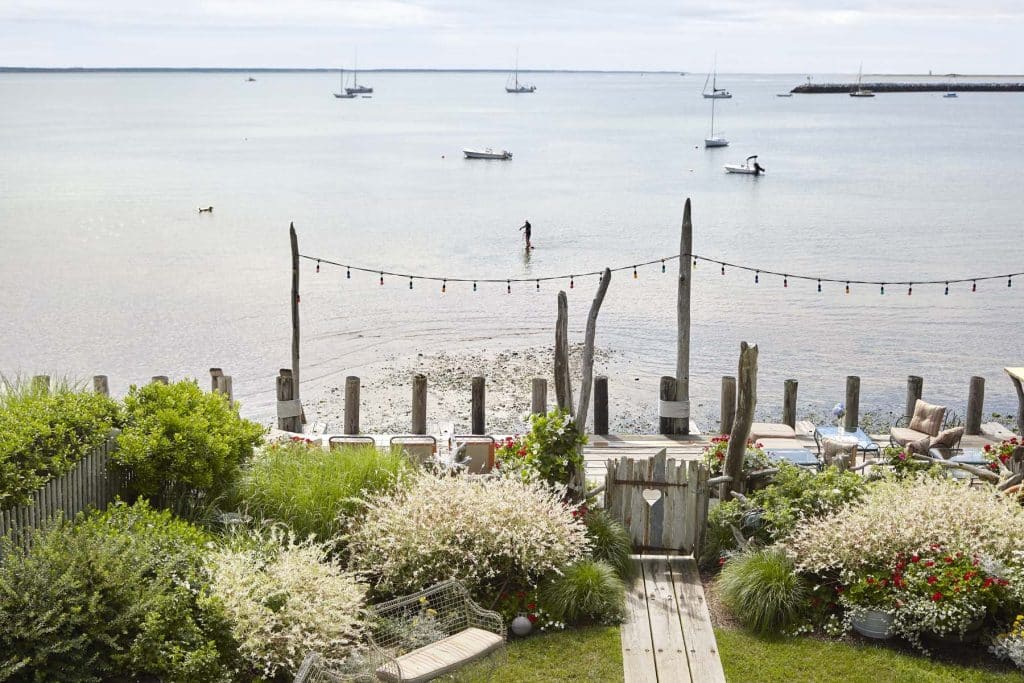 Baxter’s Landing, which was built in the early 1800s and once operated as a boarding house, looks across Provincetown Harbor toward Long Point, the very tip of Cape Cod.

Like the Armstrongs of Fishers Island, Leslie Sweeney and Cliff Cohen transitioned from a very closed house to a very open one, although not because of fire. For years, the couple lived in the center of Orient (a hamlet on the North Fork of Long Island) in a mid-19th-century Italianate house — essentially a cube with a cupola — that they had painstakingly restored. On weekends, they often biked away from the center of town, through acres of farmland with distant views of Gardiners Bay. A few years ago, they were able to buy some of that acreage. They brought in architect Bill Ryall, a neighbor, who arrived at the site with a 12-foot ladder. Moving the ladder around, he and his clients found the most dramatic location for the house: “The view opened up with each step,” says Ryall, who raised the structure just enough to capture the water vistas. Designing it, Ryall did everything he could to emphasize those views. He even sunk the frames of tall windows into the wide-plank Douglas fir floors, so when you look toward them you see only glass.

Summer houses, for those lucky enough to have them, are especially important in 2020. Architect Ryall reports that at his own home in Orient, he and his husband, the architectural historian and curator Barry Bergdoll, are “living almost in paradise during these bizarre and unexpectedly dystopian times.” He is in frequent contact with his neighbors Cohen and Sweeney, who are ecstatic about the house he designed for them. “It’s been a lovefest,” says Cohen. Adds Sweeney, “You can be lying on the couch in the living room and go into this whole other zone, watching the light change through the course of the day.” Ryall loves the house too. “I just swam a mile in their pool this evening,” he wrote in an email. “Everyone is happy.”