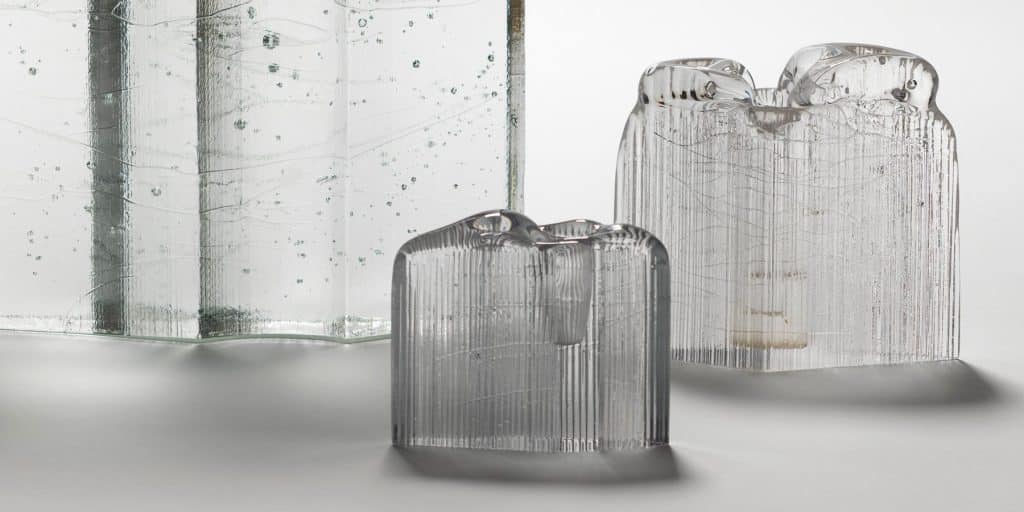 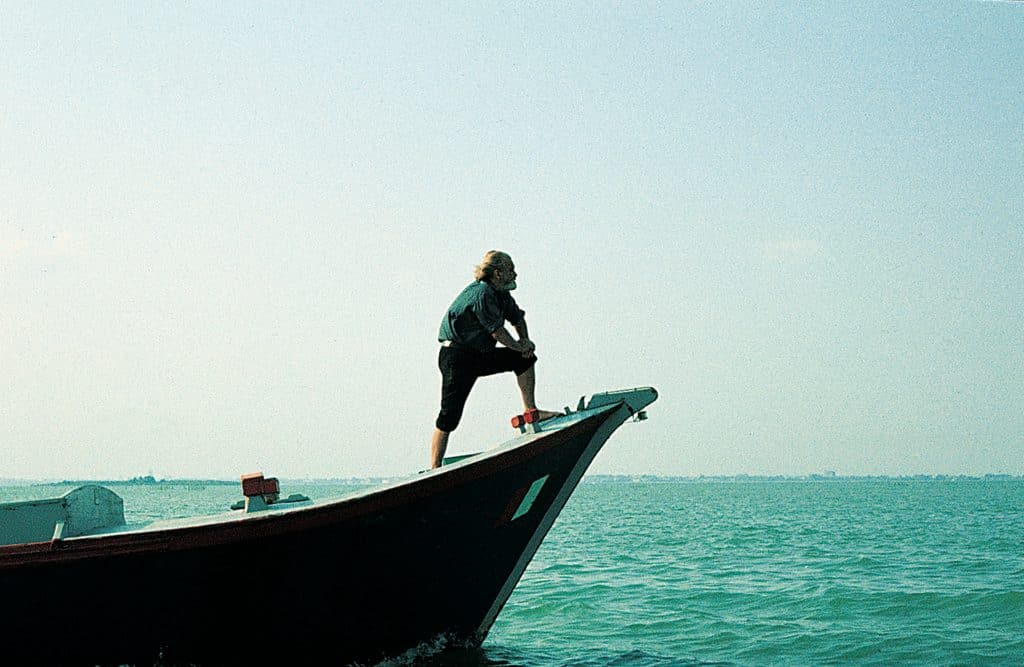 April 14, 2019The oeuvre of mid-century-modern Finnish designer Tapio Wirkkala — seen above in Venice in a 1970s photo taken by his son, Sami Wirkkala  — is wide-ranging, comprising furniture, vases, serveware, jewelry and more. Top: Wirkkala made his Paadarin jäät pieces, 1960, by blowing glass into graphite moulds he carved by hand. They take their name, which translates as “Paandar’s ices,” from the frozen water in a lake near the designer’s Lapland home. All photos by Ari Karttunen / EMMA unless noted

From the shiny new Tapiola metro station, west of downtown Helsinki, it’s a short walk to EMMA, a spectacular art and design museum in a converted factory building. One of its highlights is a space devoted to the work of Tapio Wirkkala, which I visited recently in an effort to learn more about the legendary Scandinavian modern designer. Wirkkala, who died in 1985, shaped glass, wood, porcelain, metal and plastic into both popular products and one-of-a-kind artworks. His extensive oeuvre includes furniture, vases, utensils, elaborate gold and silver necklaces and earrings, candlesticks, floor lamps and hanging fixtures, many of them not just designed but also made by Wirkkala, who is an icon in his native Finland — and beyond. “It’s impossible to overstate the importance of Wirkkala to Scandinavian design,” says Andrew Duncanson, the owner and founder of Stockholm gallery Modernity, who sells as many Wirkkala pieces as he can find. 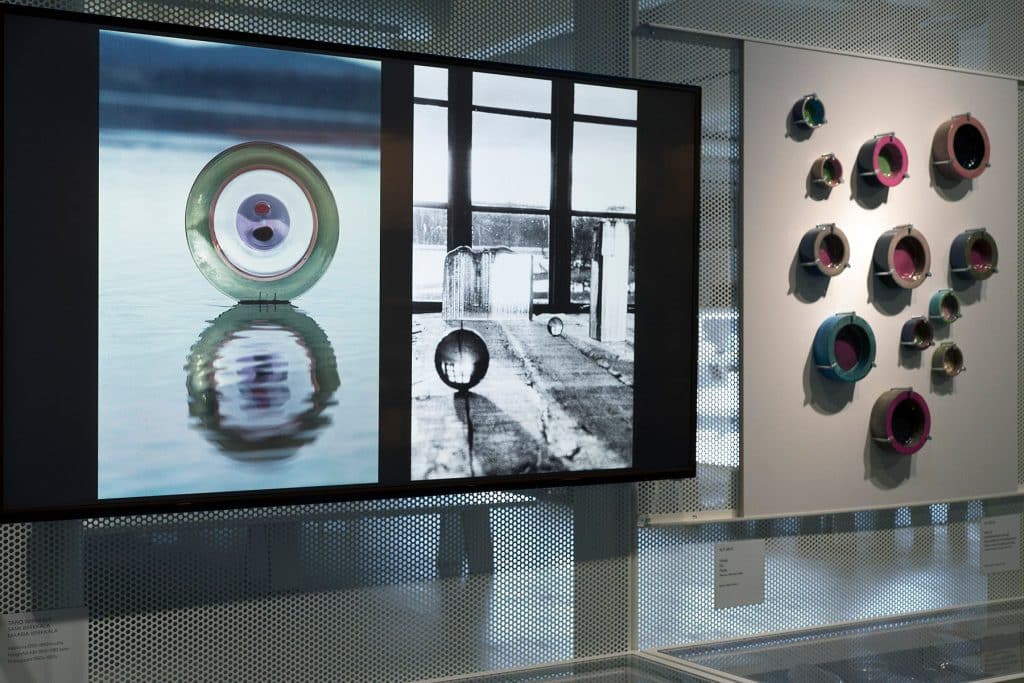 In addition to devoting an exhibition space to the work of Wirkkala and his wife, designer Rut Byrk, Helsinki’s EMMA art and design museum has a conservation lab where the couple’s work is prepared for shows around the world. It also contains the offices of the foundation that looks after their archive and a “visible storage” area displaying more than 2,000 pieces, including, from left above, Wirkkala’s Piatto di Tapio, made for Venetian glass company Venini, 1966–70; two of his Paadarin jäät pieces; and 1960s bowls by Bryk. 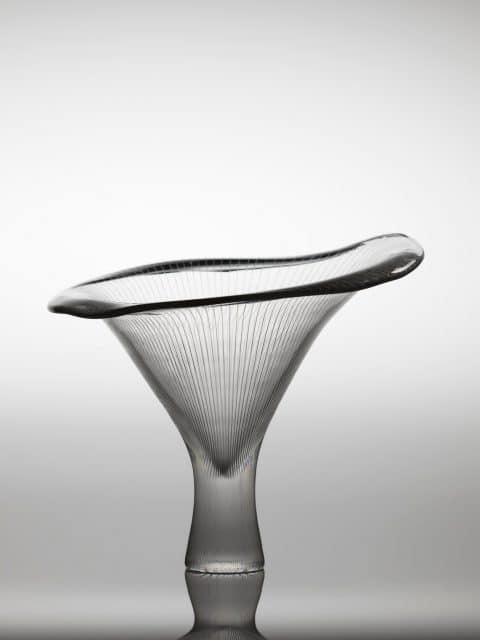 Wirkkala’s glass Kanttarelli vase, 1946–51, is shaped like a chanterelle, Kanttarelli in Finnish. Stockholm gallery Modernity currently has an example on offer.

When Rut Bryk, Wirkkala’s widow and herself a brilliant ceramist, died, in 1999, their son and daughter inherited thousands of objects by both parents. It took the heirs 14 years to find the right home for the collection, which at one point nearly left Finland. But they ultimately hit upon a solution that could serve as a model for other artists’ estates. EMMA (officially the Espoo Museum of Modern Art) hosts a conservation facility, where the designers’ pieces are currently being prepared for museum shows later this year in Italy (Wirkkala) and Japan (Bryk). And it provides office space to Petra Wirkkala, the couple’s granddaughter, who runs the Tapio Wirkkala Rut Bryk Foundation.

But the heart of the foundation’s space is the “visible storage” area, where thousands of original sketches can be seen in drawers and cabinets and more than 2,000 objects by Wirkkala and a smaller number by Bryk are displayed. Here are the famous bottles, resembling dripping icicles, that he created for Finlandia Vodka beginning in 1970, and glassware designed for Iittala following similar themes. Vessels in porcelain for Rosenthal, wooden trays that look like leaves and countless other items are also on view. There’s also a gallery within the visible storage area whose rotating exhibitions, like a recent one featuring models of Wirkkala’s entry in the City of the Future 2000 competition at the 1958 Brussels World’s Fair, often include the designers’ work and always touch on ideas addressed in their oeuvre. 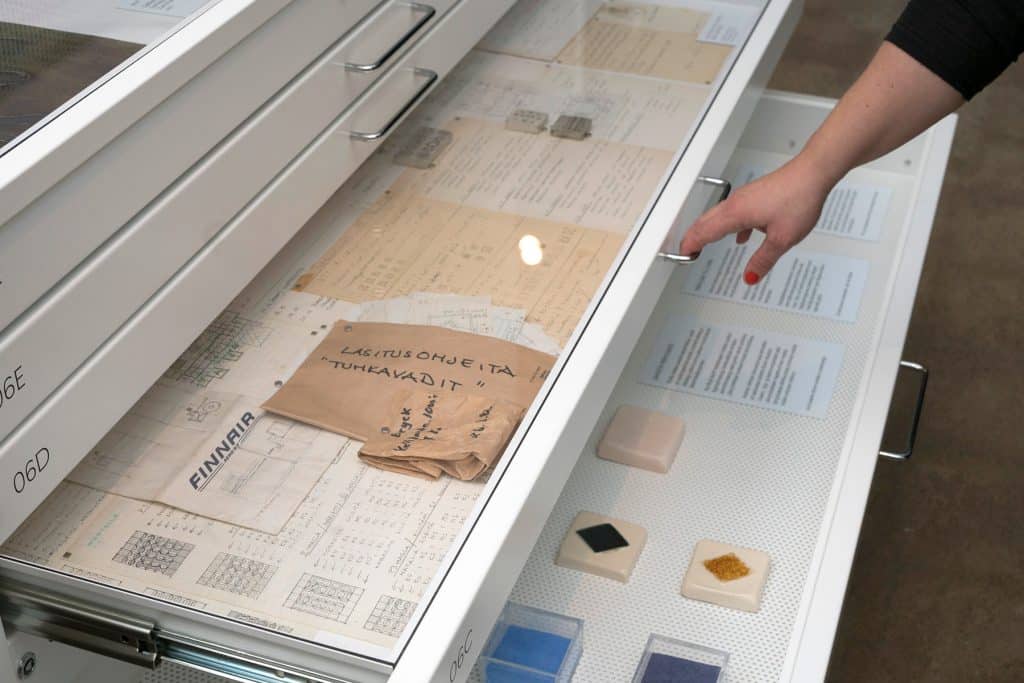 The spaces devoted to Wirkkala at Helsinki’s EMMA art and design museum include extensive room for visible storage.

What unites Wirkkala’s diverse output is its connection to the animal, vegetable and mineral realms. Recurring motifs derive from birds’ beaks and nautilus shells, from leaves and buds and mushrooms, from snowdrifts and polished river rocks. Brooklyn-based landscape architect Michael Van Valkenburgh discovered Wirkkala on a trip to Finland a dozen years ago and says, “The work blew me away.” He cites as especially inspiring the designer’s direct references to patterns found in nature. 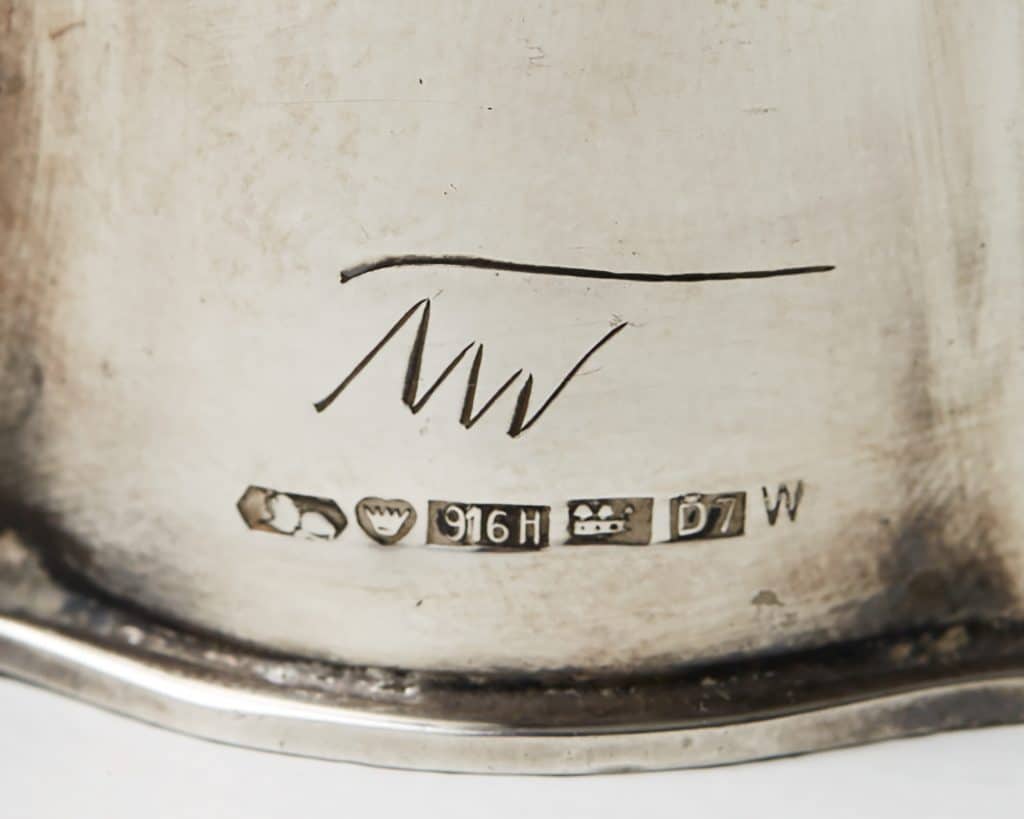 The work of mid-century-modern Finnish designer Tapio Wirkkala has never gone out of style. The Stockholm gallery Modernity currently has on offer a signed sterling-silver vase he designed in 1957. Photo by Åsa Liffner / courtesy of Modernity 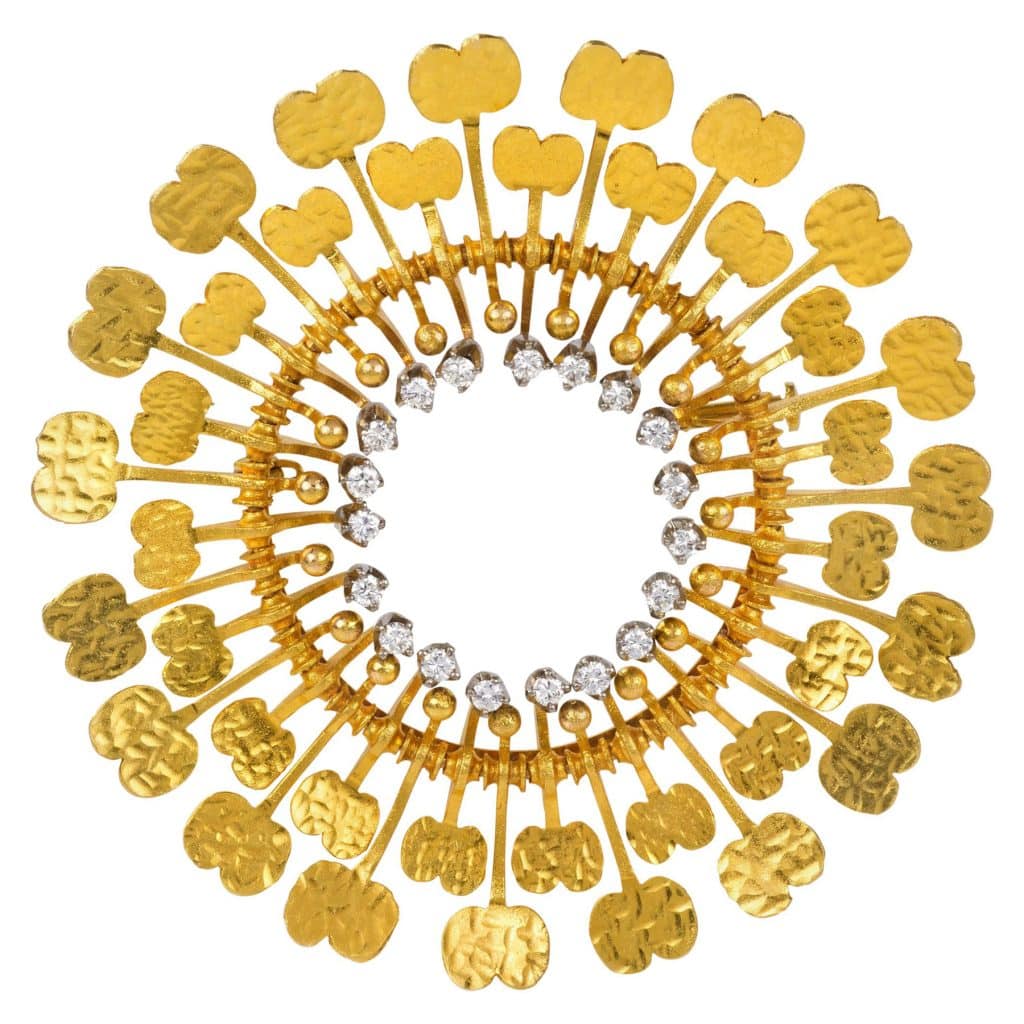 Mahnaz Collection currently has for sale a rare Wirkkala diamond and gold Sunflower brooch from 1974. 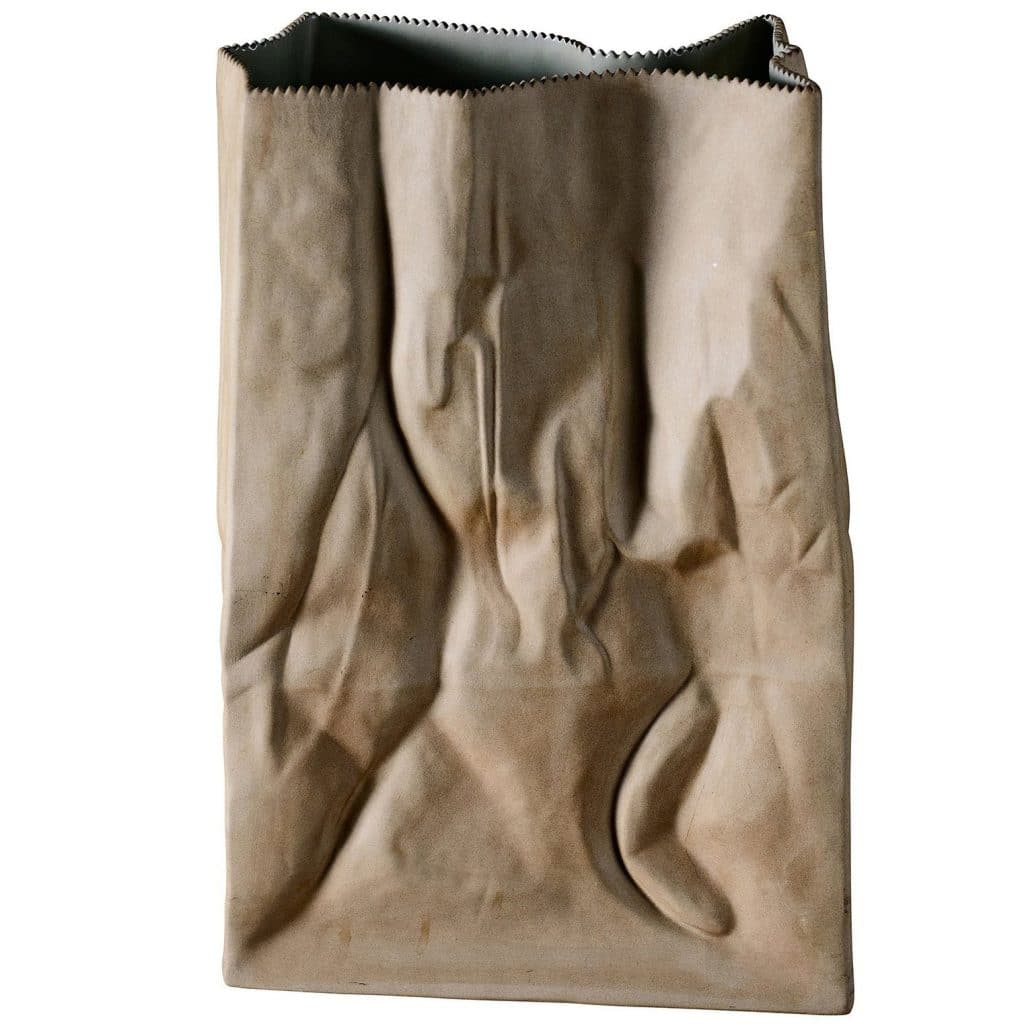 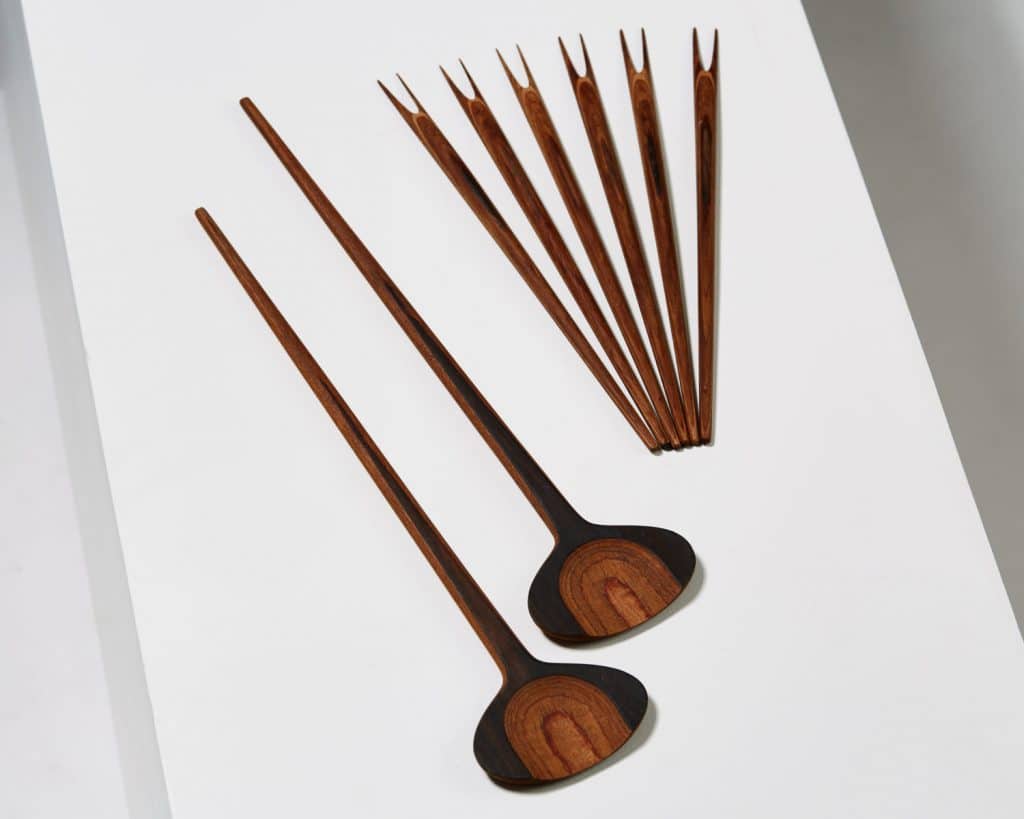 Wirkkala designed this set of serving pieces, comprising spoons and olive forks, in 1950. It is currently on sale at Modernity. Photo by Åsa Liffner / courtesy of Modernity 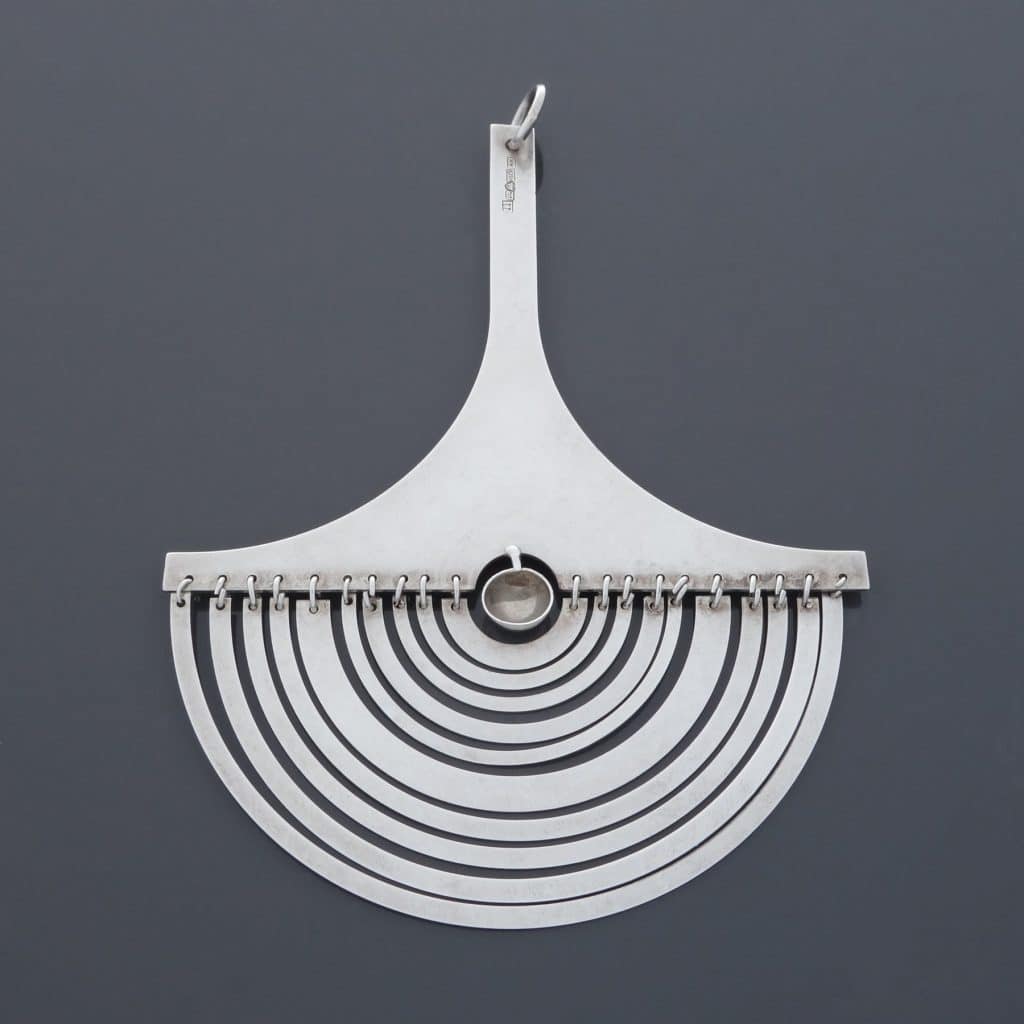 Among the many pieces of jewelry Wirkkala designed over the years, this silver Kuunsirppi pendant from the 1970s can be purchased through Rhinegold Gallery. 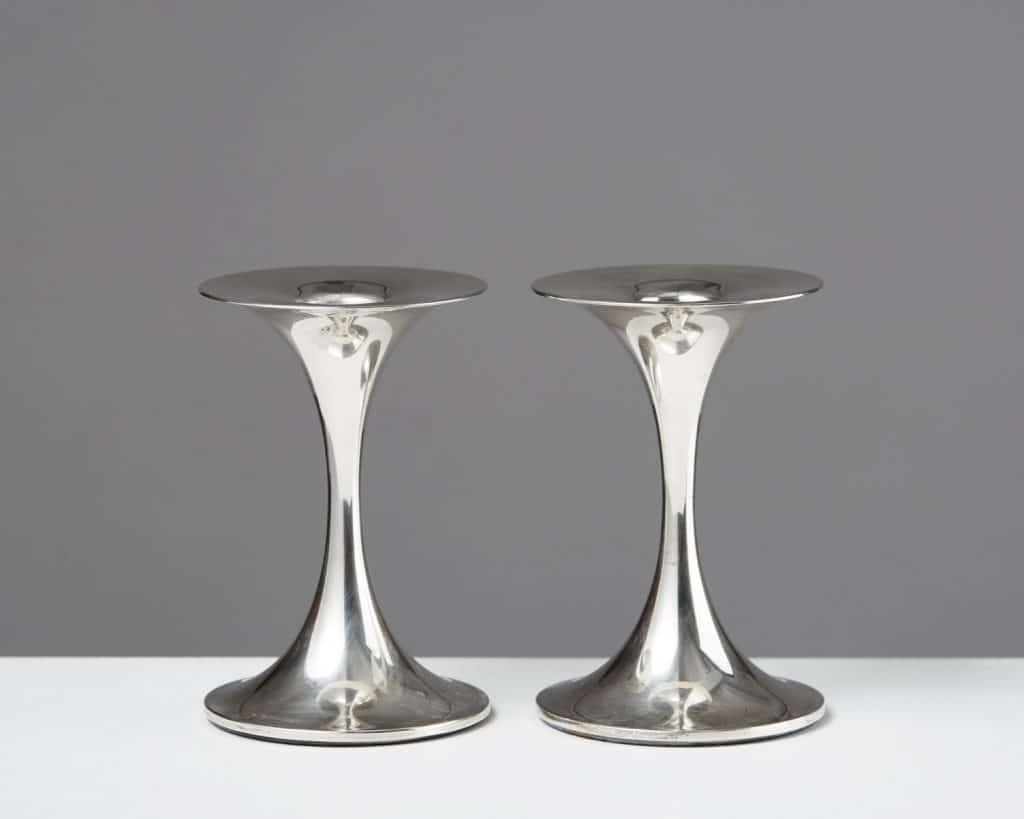 Wirkkala created silver candleholders for Kultakeskus, in 1963. Modernity is offering these examples, produced by the company in 1999 from the original design. Photo by Åsa Liffner / courtesy of Modernity 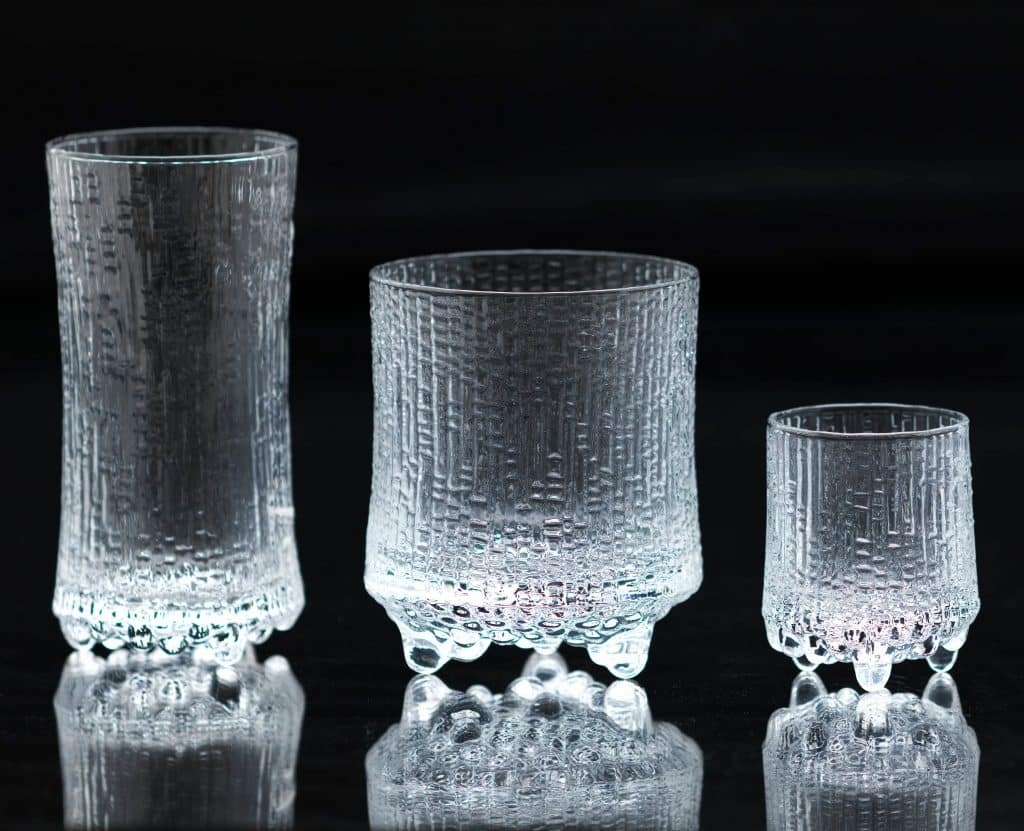 Wirkkala took inspiration for his blown-glass Ultima Thule line from Lapland’s melting ice. Made for Iittala in the 1960s, the collection remains in production to this day. 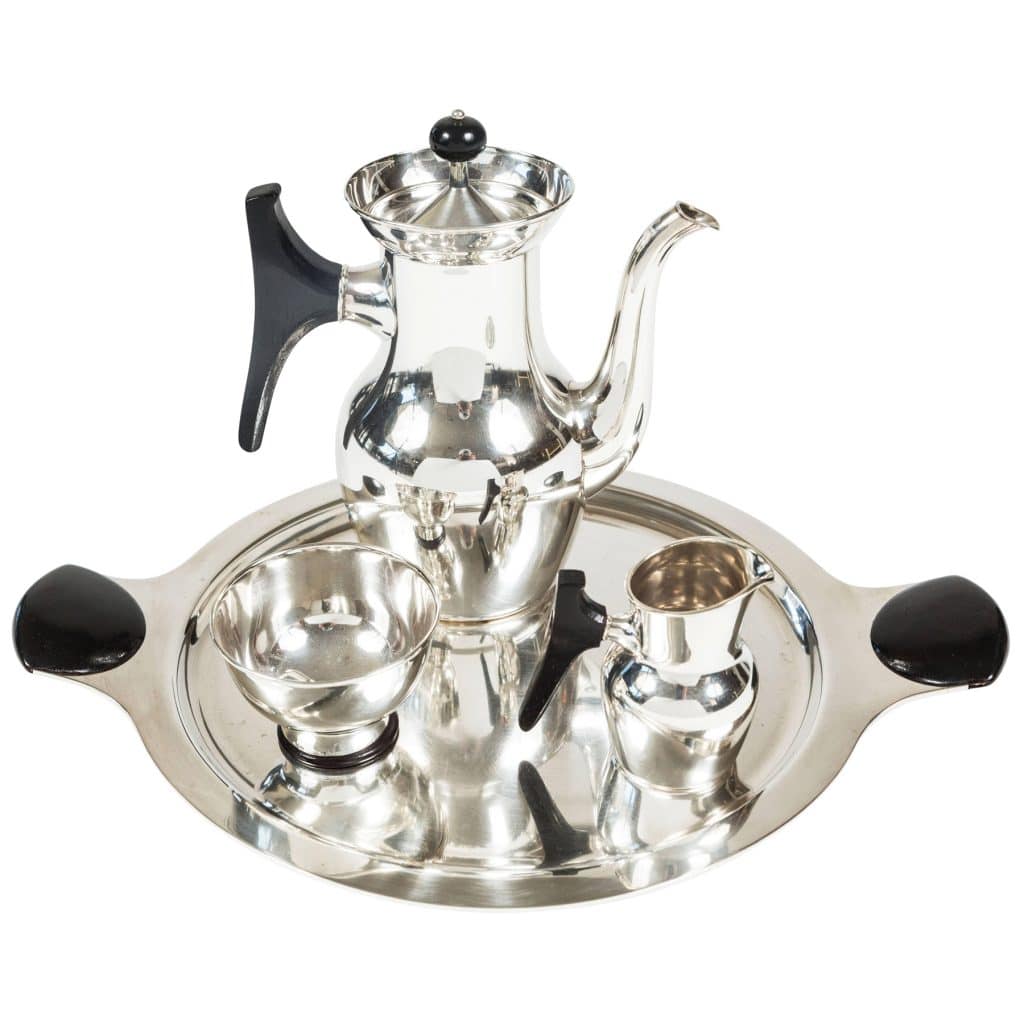 Wirkkala conceived this sterling-silver coffee set for the Finnish company Kultakeskus Oy around 1960; it is available now through Dragonette. 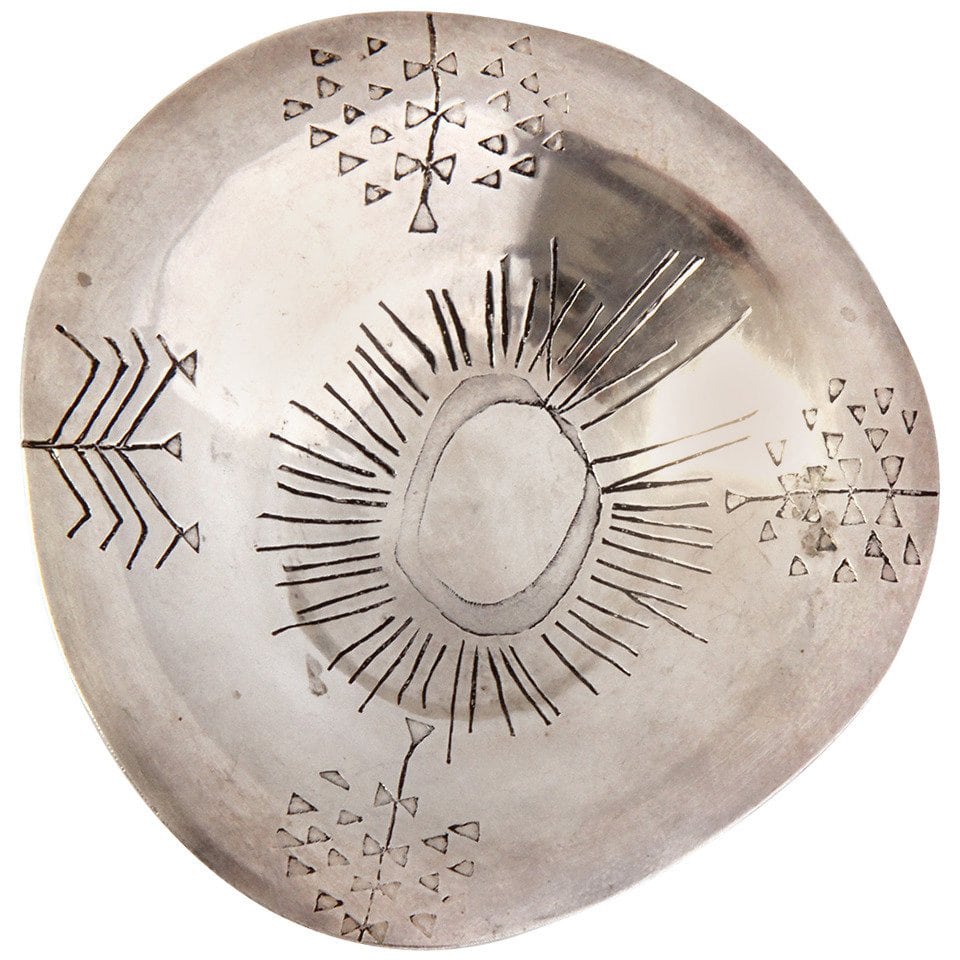 Wyeth has for sale this unique silver-alloy bowl from the 1950s adorned with a hand-wrought and hammered abstract design of sun and plants. 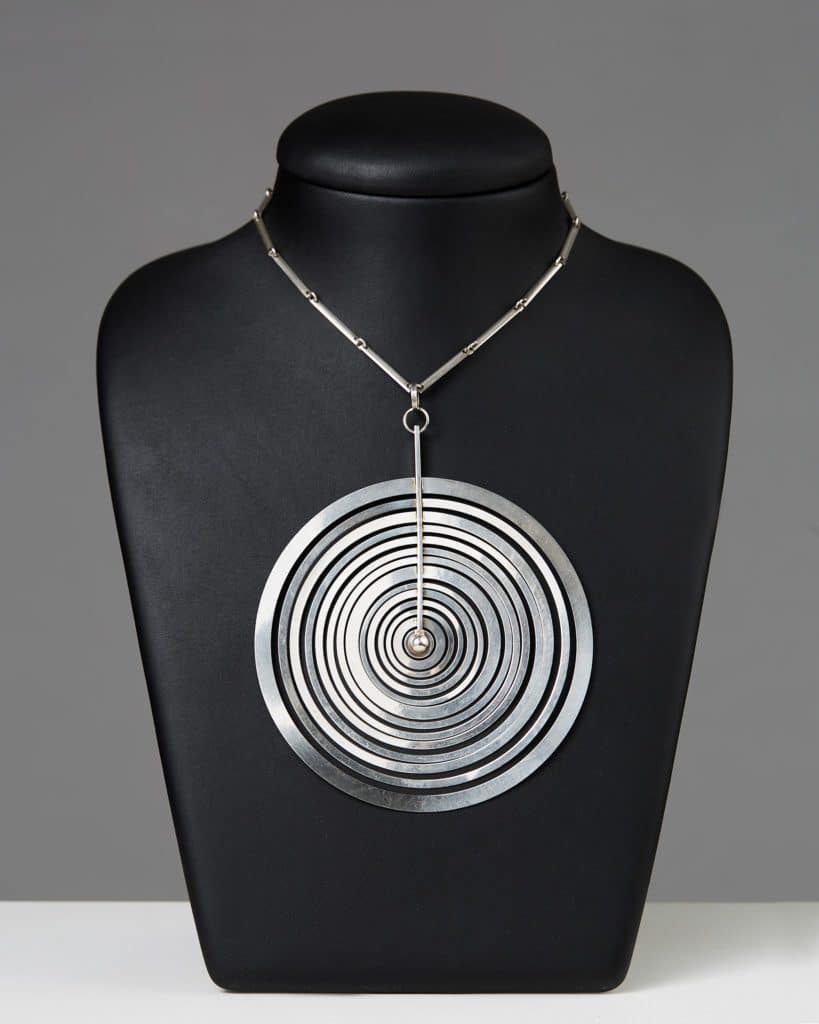 This silver Full Moon pendant, made for Kultakeskus in 1972, is for sale at Modernity. Photo by Åsa Liffner / courtesy of Modernity 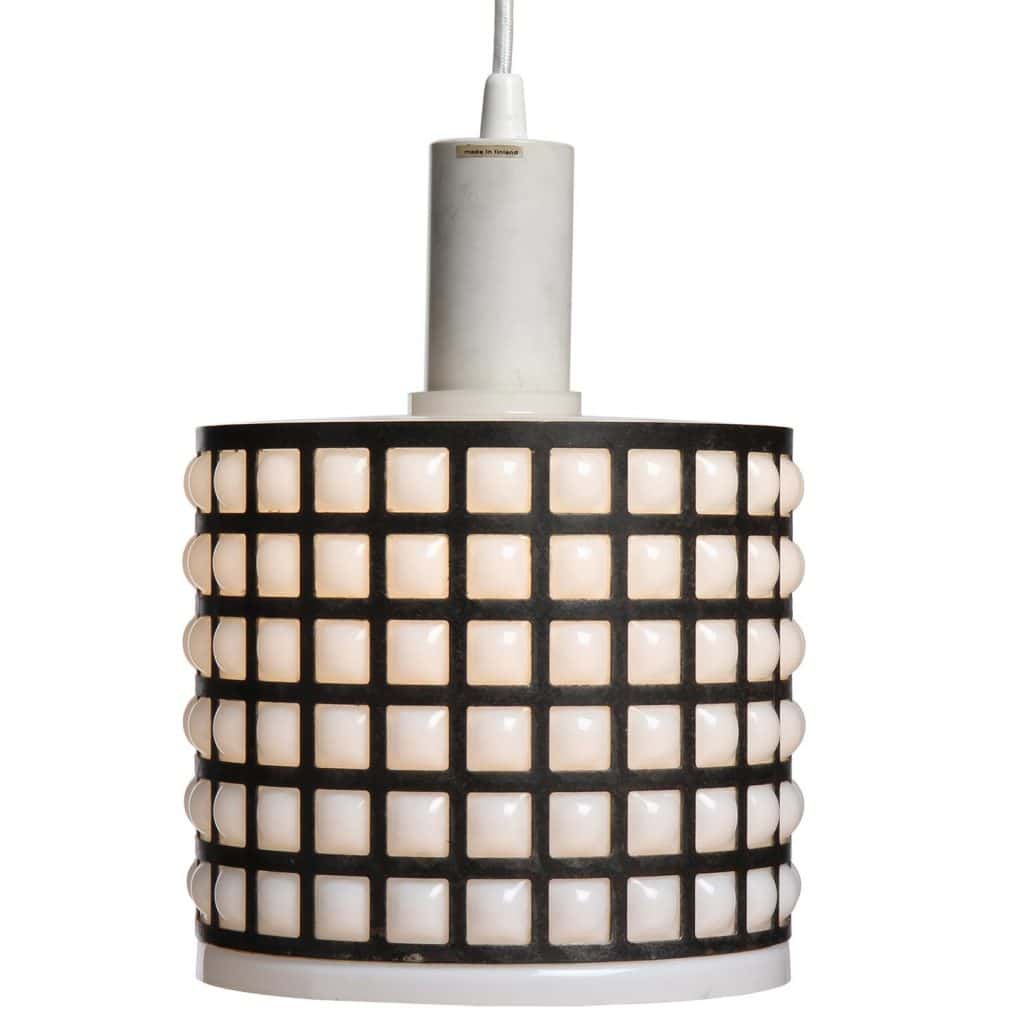 Wyeth is also selling a gridded glass and bronze ceiling pendant from the 1960s. 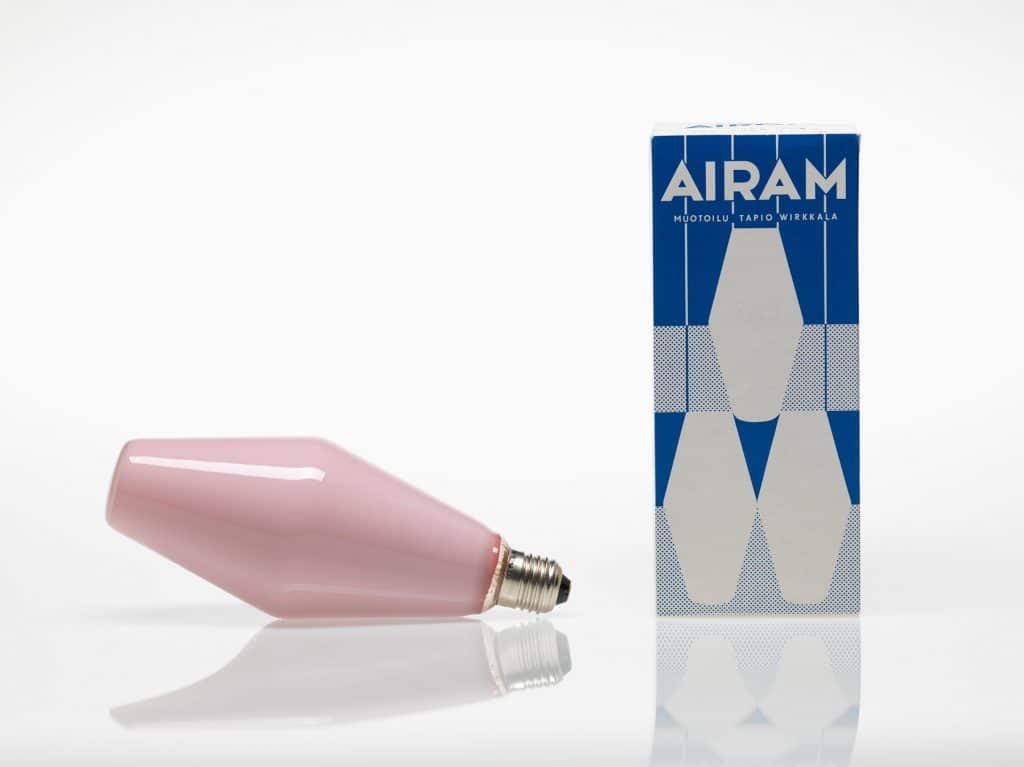 Wirkkala designed his WIR lightbulb for the Finnish design company Airam in 1959. It won the Grand Prix at the XII Milan Triennale, in 1960. Airam has recently rereleased the bulbs. 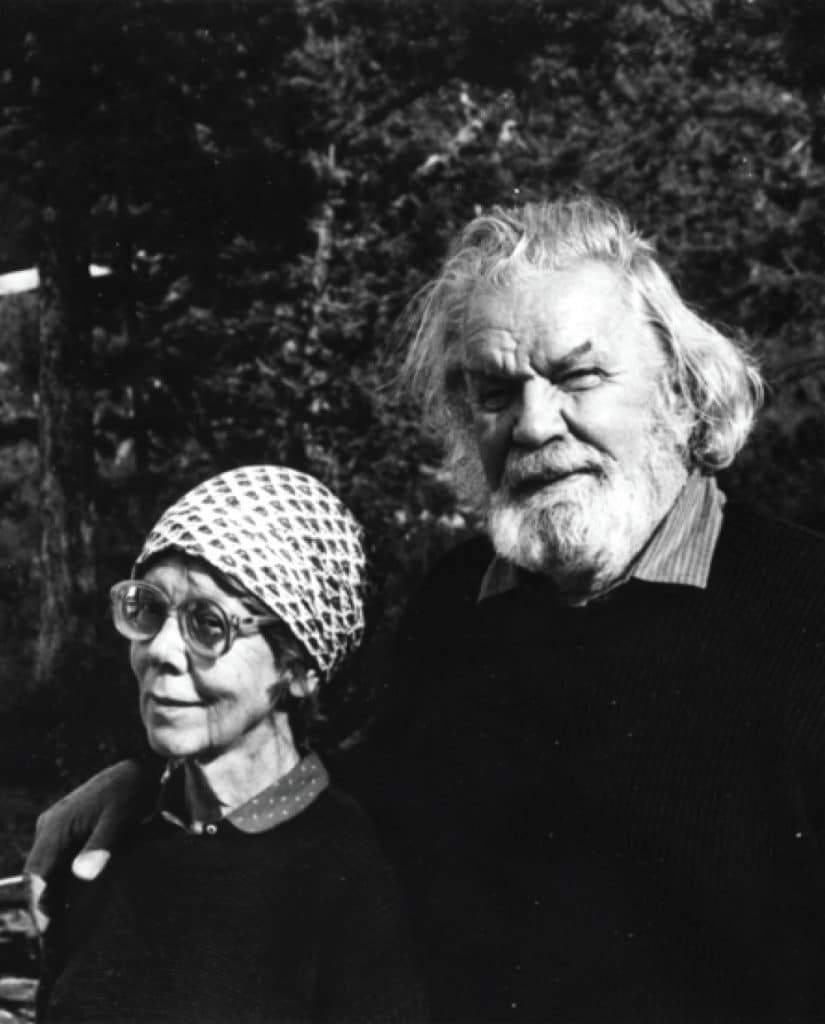 Wirkkala poses with his wife, designer Rut Bryk, in Lapland in the 1980s. The designers’ artist daughter, Maaria Wirkkala, took the photo.

Wirkkala, who was born in 1915, had a deep relationship with the natural world. “He was always photographed as an outdoorsy, woodsman type,” says Christopher Mount, a design historian and former curator at New York’s Museum of Modern Art. In an interview for a 1981 catalogue accompanying an exhibition at the Finnish Glass Museum — which occupies a building renovated according to Wirkkala’s scheme — the designer said, “All materials have their own unwritten laws.” He spent time learning those laws, often at a house in Lapland that he built with his own hands. When Wirkkala died, in 1985, textile designer Jack Lenor Larsen said of him that what he “learned in wood, he would take to his glass projects, using similar processes and concepts. . . . The human and tactile qualities in his utilitarian designs are what made his work so strong.” 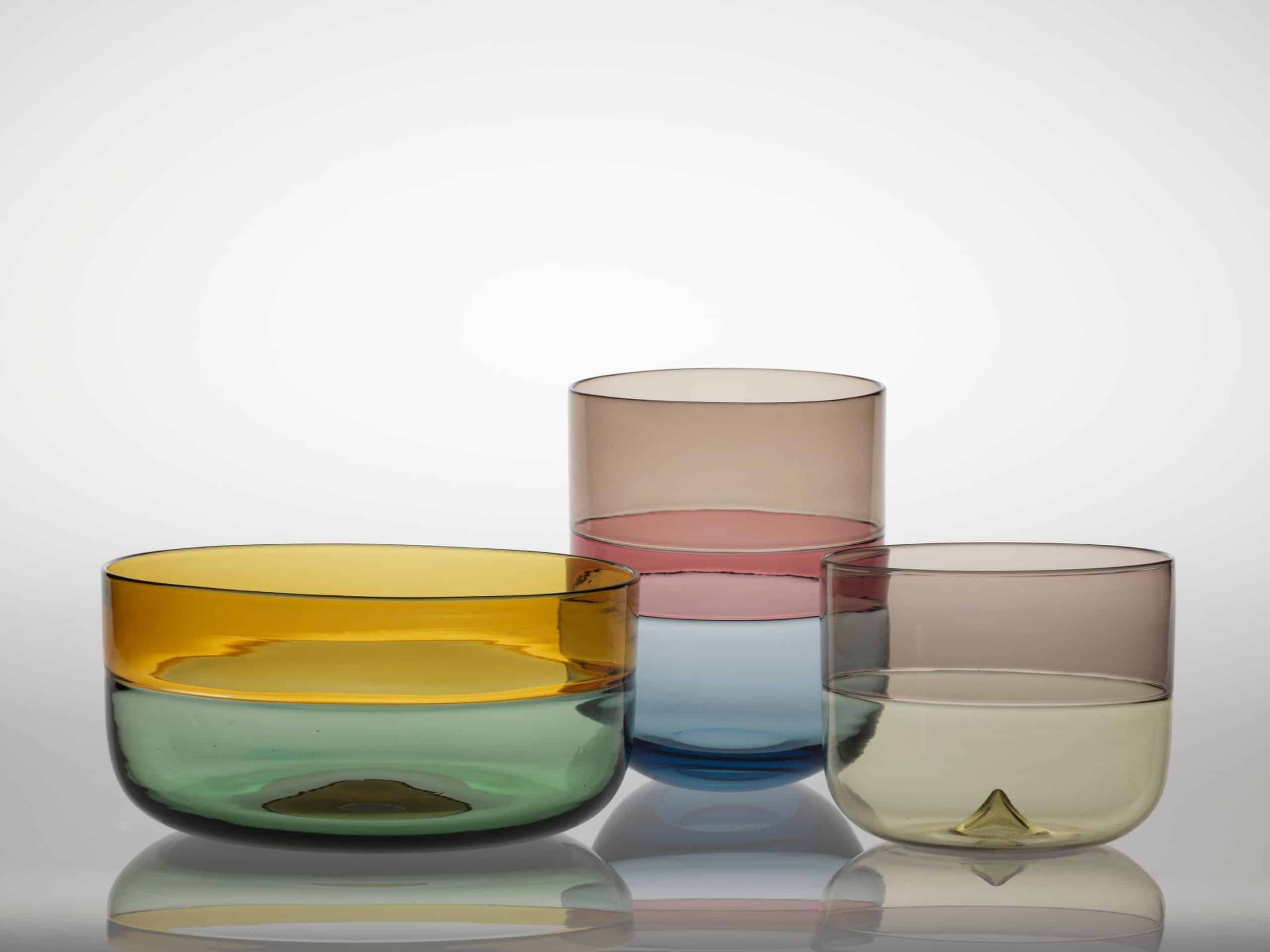 Wirkkala began designing pieces for Venini in the mid-1960s. Venice’s Murano Glass Museum is hosting a show of his work later this year.

Wirkkala carved his models and moulds using a traditional Finnish carving knife, and his take on the instrument has been sold around the world. “The craftsman has the advantage that at every stage of his work, his material is there at his hand to feel and command,” Wirkkala wrote elsewhere in the 1981 Finnish Glass Museum catalogue.

Carving, he added, “takes me into another world, a world in which even if my sight were to fail, the eyes in the tips of my fingers would feel the movement and the constant change in shapes.” 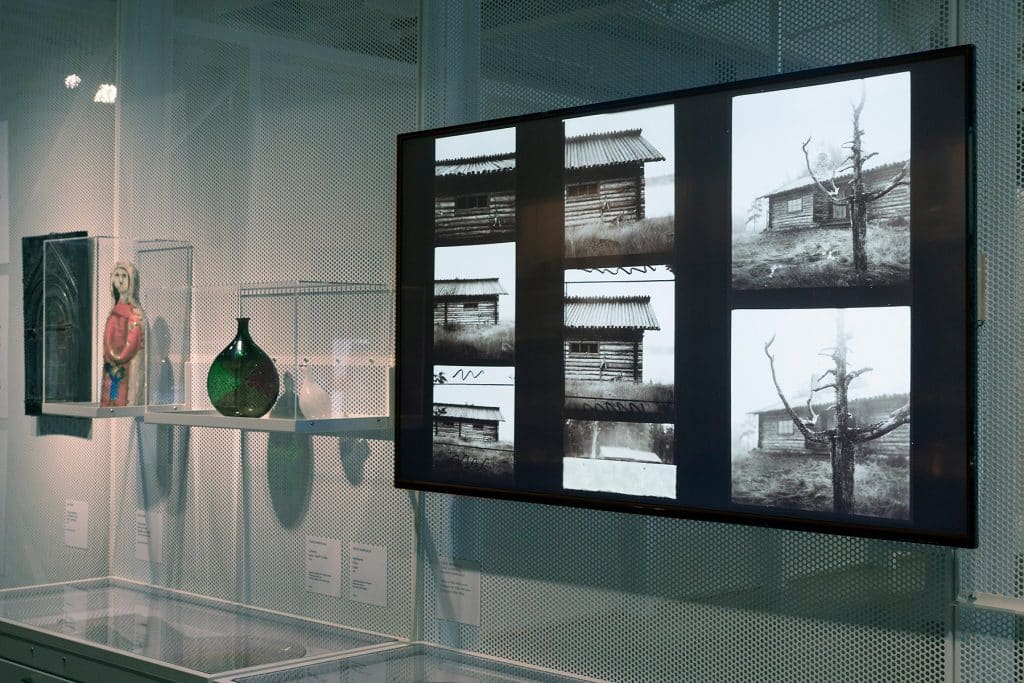 A screen in the visible storage area presents a slideshow of photos that Wirkkala and Bryk took of the places where they spent the most time: Lapland (seen here) and Venice.

As a leading exponent of Finnish design in the years after World War II, Wirkkala was given the resources to tinker with materials and methods. Finland, which had been mainly agrarian until the war, seized on design as a way to expand its economy and raise its profile. (By contrast, Duncanson says, “Sweden was a highly socialist country that tended to stifle the creativity of designers and artists whose work was considered too exclusive.”) 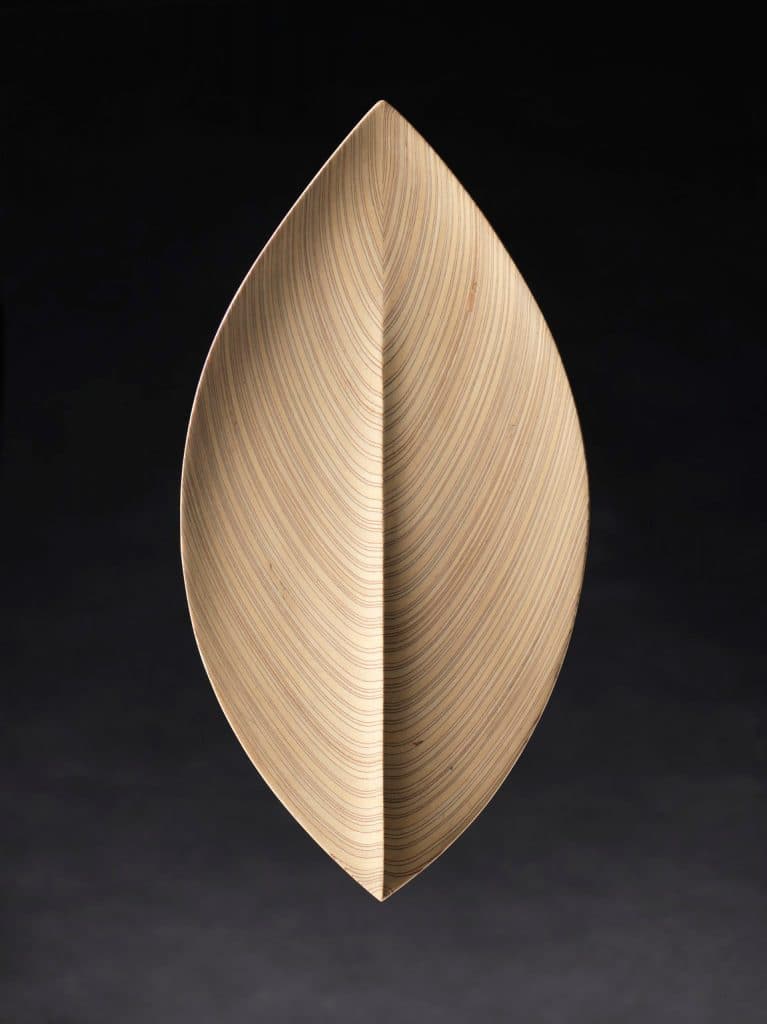 Using aircraft plywood, Wirkkala made several versions of this Lehtivati (“leaf platter”) piece in different sizes over the years. Designed and first crafted by his own hand in 1950, it was in serial production from 1970 to 1989.

“It’s fascinating that a country as small as Finland was able to export taste to the rest of Europe and the U.S.” says Mount. “Picture women in the 1950s wearing Marimekko, holding Arabia glassware.” Many of those women were sitting on chairs by Wirkkala’s countryman and contemporary Alvar Aalto.

Wirkkala came along at the right time. In 1946, he won an Iittala design competition and was immediately hired by the company, beginning an association that lasted until his death. Around the same time, he won a competition to design Finland’s currency. He later also designed the country’s stamps and its exhibitions for world’s fairs and trade shows.

Currently, both Modernity and the New York gallery Wyeth have Wirkkala pieces for sale. It’s a measure of the designer’s versatility that their offerings do not overlap. Wyeth’s, for example, include a leaf-shaped sterling-silver bowl, a gridded glass-and-bronze pendant fixture and a richly patinated copper bowl. Modernity, meanwhile, has one remaining panel left from a series of three marquetry pieces designed for the furniture company Asko. “They’re special because of their history,” Duncanson says, explaining that the pieces were used by Asko to advertise the tabletop patterns Wirkkala created using veneers of woods like padouk, maple, hazel and birch. 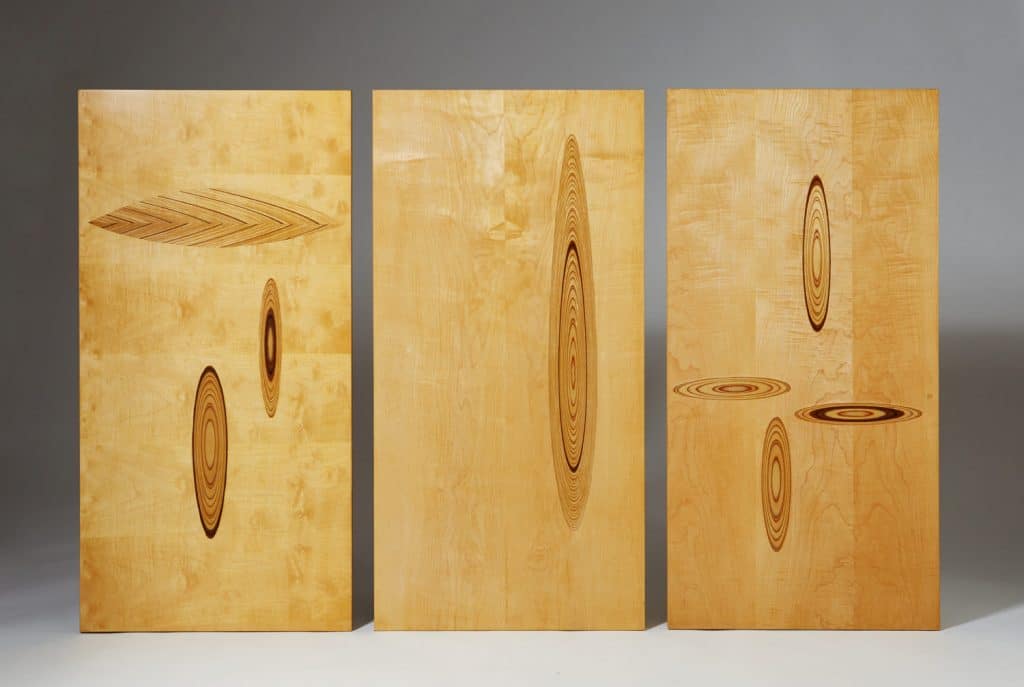 Wirkkala designed this trio of marquetry panels for the furniture company Asko in the 1950s. Modernity is offering for sale the one at right. Photo by Åsa Liffner / courtesy of Modernity

Modernity has candlesticks and glass and silver vases, too, as well as a silver Full Moon pendant and a set of serving spoons and olive forks. Made as prototypes from fine woods, those utensils are not destined for household use. “They’ll be treated like small sculptures,” Duncanson says. “They’re museum pieces.”