The Top Treasures at TEFAF 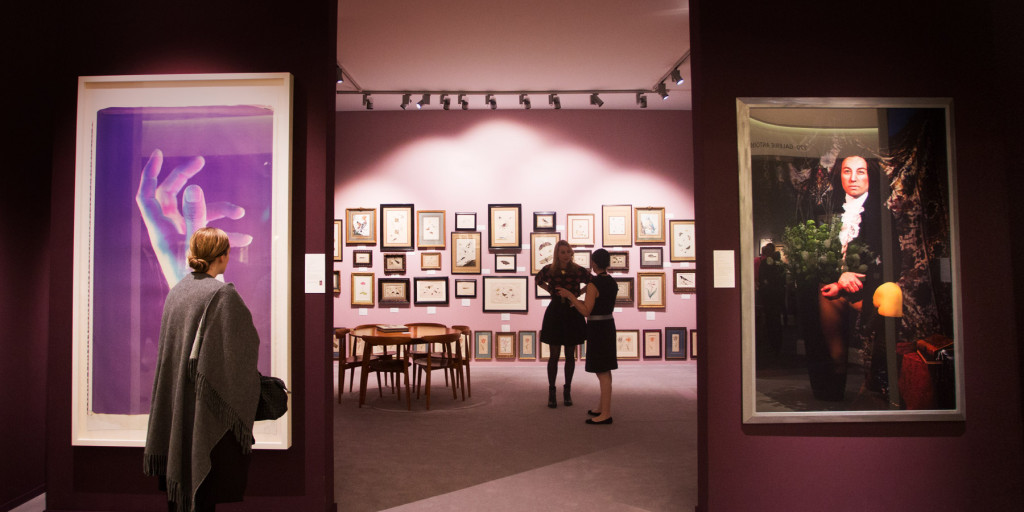 The trophies spotlighted at this year's fair in Maastricht range from Old Master paintings to the latest fine design. We show you a few of the best. 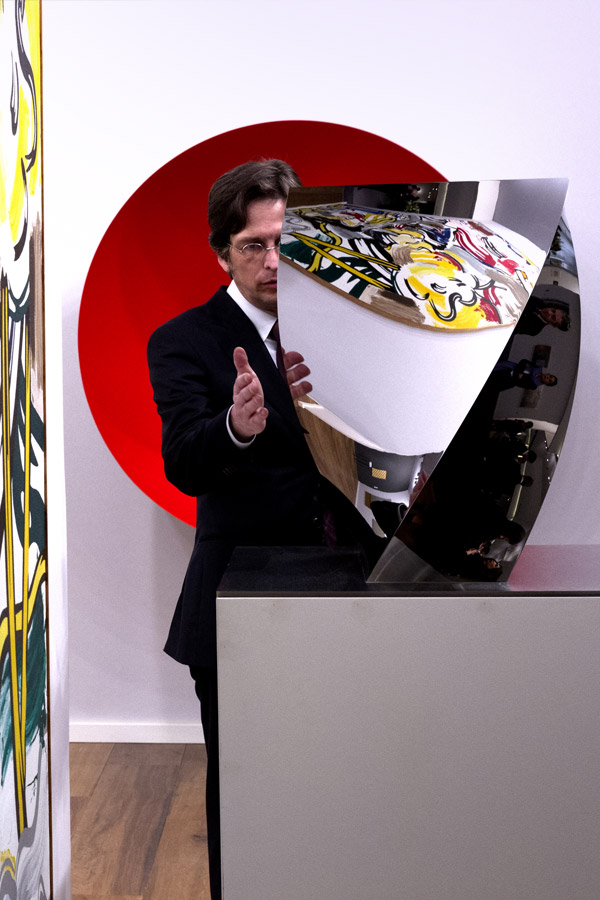 March 14, 2016The European Fine Art Fair (TEFAF) runs from March 11 to 20 in the Dutch city of Maastricht, drawing 75,000 visitors (photo by Harry Heuts). Top: This year features 275 galleries from 20 countries selling everything from Old Master paintings and antiquities to contemporary works on paper and 21st-century design (photo by Loraine Bodewes).

Change is in the air at the European Fine Art Fair (TEFAF), which runs through March 20 at the convention center in Maastricht, the Netherlands. For one thing, the floor plan has a different configuration, including a new entrance hall with two entry points that ease access for the 75,000 annual visitors who consider the fair the very apex of the art-and-antiques-world calendar.

Then there’s the recent bombshell announcement that the 29-year-old event is joining with Artvest Partners to add two annual TEFAF events in New York, at the Park Avenue Armory. The first will be a traditional art and antiques fair set to debut this coming October — taking the time slot long held by the International Show — and the other event will focus on modern and contemporary art and design, scheduled to launch in May 2017, replacing Spring Masters New York at the Armory.

“The Dutch like to mix old and new,” says Michel Witmer, a New York art adviser and collector who’s on the TEFAF board. “Americans have remained the most stable and among the richest buyers at TEFAF, so why not go to them?”

Most aspects of the mother ship, however, remain the same. This year, TEFAF features 275 galleries from 20 countries selling antiquities, Old Master paintings, photography, jewelry, works on paper, 20th- and 21st-century design and more.

As always, before the fair opened, 175 international experts in 29 categories spent two days vetting the show, examining each work for authenticity, condition and proper labeling. Anything not up to snuff was summarily removed from the floor. But what sets the experience apart for collectors — not to mention the directors, curators and board members of 75 American museums expected to walk TEFAF’s aisles — is the possibility of serendipitous discoveries. For those who can’t attend (or simply feel overwhelmed), here are some extraordinary offerings from this year’s event that caught our eye.

Study for the Most Beautiful Foot, 1967, by Tom Wesselmann 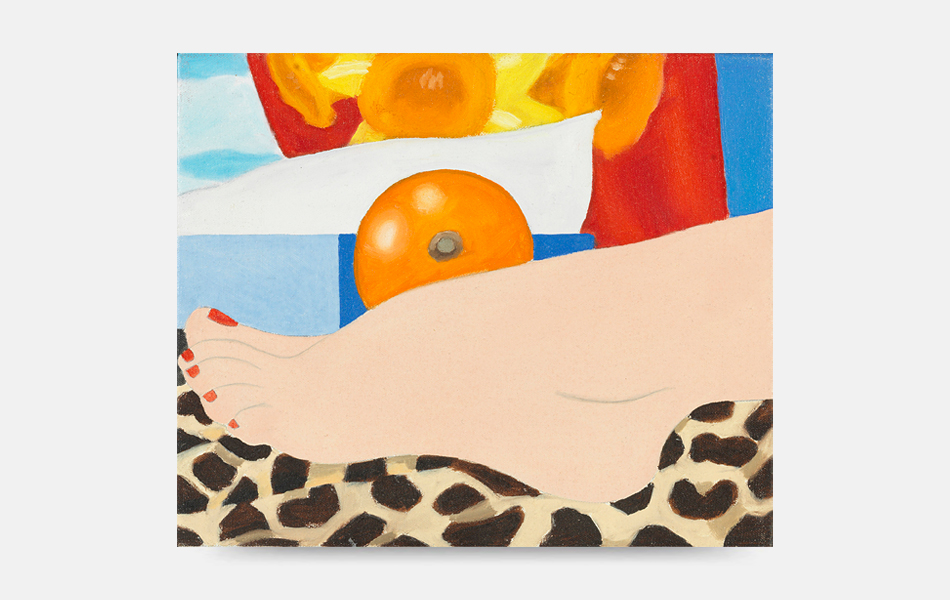 The London gallery Connaught Brown is featuring a Tom Wesselmann oil painting from 1967. Study for the Most Beautiful Foot depicts the appendage of the title, arched and set off against a background composed of a ripe orange and flowers. “Prior to the 1960s, no one would have put a foot and a still life together. It’s irresistible,” says Anthony Brown, who co-owns the gallery. “This is American Pop art, but it’s not simply a commercial image — it’s also about humanity. If you look at James Rosenquist or Jasper Johns, you don’t have a sexy element combined with commercialization. With Wesselmann, sexy is fun; it’s not to be taken too seriously.” 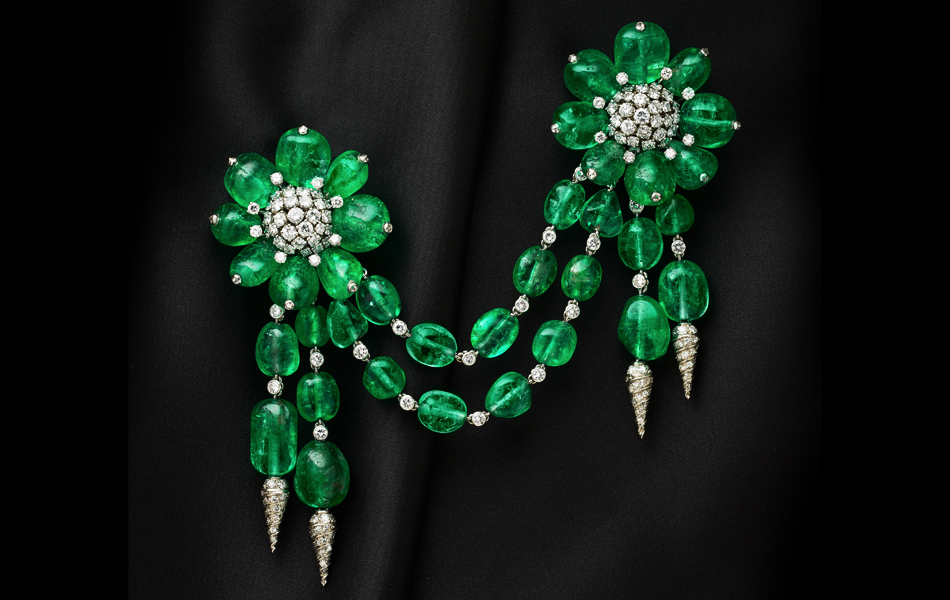 This Verdura emerald and diamond brooch, which Baron Alain de Rothschild gave his wife, Mary, in 1958, is incredibly glamorous. London jeweler Hancocks calls it “the Queen’s Studs,” an allusion to the diamonds that provide a major plot point in Alexandre Dumas’s novel The Three Musketeers. Two detachable flower heads festooned with Colombian emeralds and diamonds are linked by two rows of emerald beads interspersed with bezel-cut diamonds. The technical name for this type of brooch is devant-de-corsage, which is French for front-of-bodice and refers to its use of ornamenting the top of a woman’s dress.

The Manhattan gallery Demisch Danant displays a real standout: a huge, solid bronze Expansion table by the French sculptor César Baldaccini from 1977. The table recalls an earlier poured-bronze console that the late decorator Henri Samuel, an early patron of César (as he was commonly known) and his fellow New Realists, kept in his Paris salon. “César made very few pieces of furniture,” gallery cofounder Suzanne Demisch says, adding, however, “this is more like a sculpture than a table. It’s massive, and it’s rare. We haven’t seen one on the market in a long, long time.” 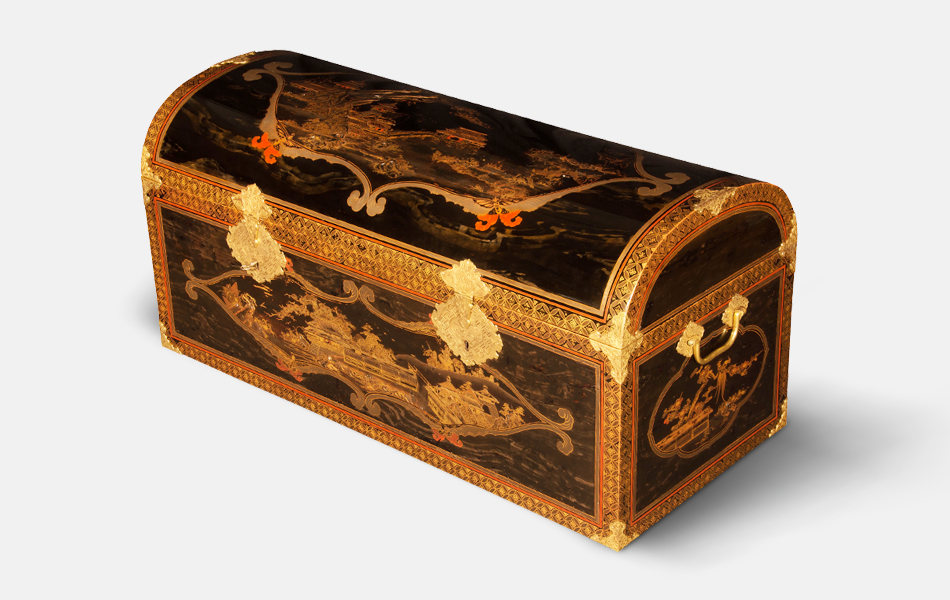 Pieter Hoogendijk, a Dutch dealer who has been exhibiting at TEFAF for decades, is especially proud of the 17th-century Japanese lacquered coffer that he is offering. More than four feet long, it is an example of nanban, luxury goods that the Japanese exported to the West in the 16th and 17th centuries. Most lacquer is flat, but these intricate landscapes are in relief, with bright red accents. “It is very rare because it has scenes on the top, back and sides, even on the inside. It’s also in perfect condition,” says Hoogendijk, who specializes in fine European and Japanese lacquered furniture and counts several museums among his clients. “I haven’t seen one of this size and quality in many years.” 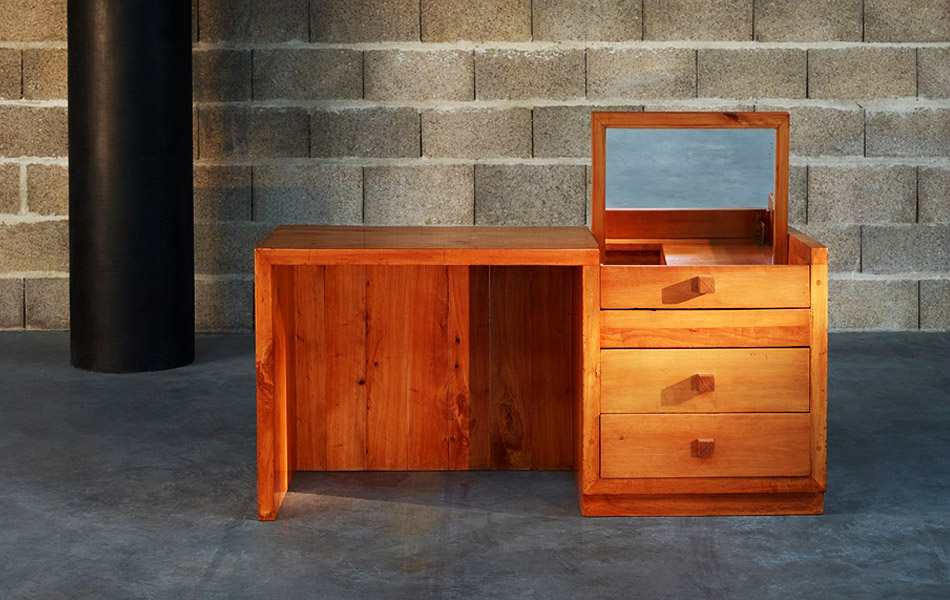 François Laffanour, of Paris’s Galerie Downtown, has a hot pink and orange booth in homage to Mexican architect Luis Barragán. The purpose: to highlight a pine dressing table from Barragán’s 1951 commission Casa Pedregal, in Mexico City. “He was inspired by Le Corbusier to create functional pieces free of ornamentation,” Laffanour says. “We forget that Barragán was the second winner of the Pritzker Prize and a master of clean lines. Very little of his furniture survived.” 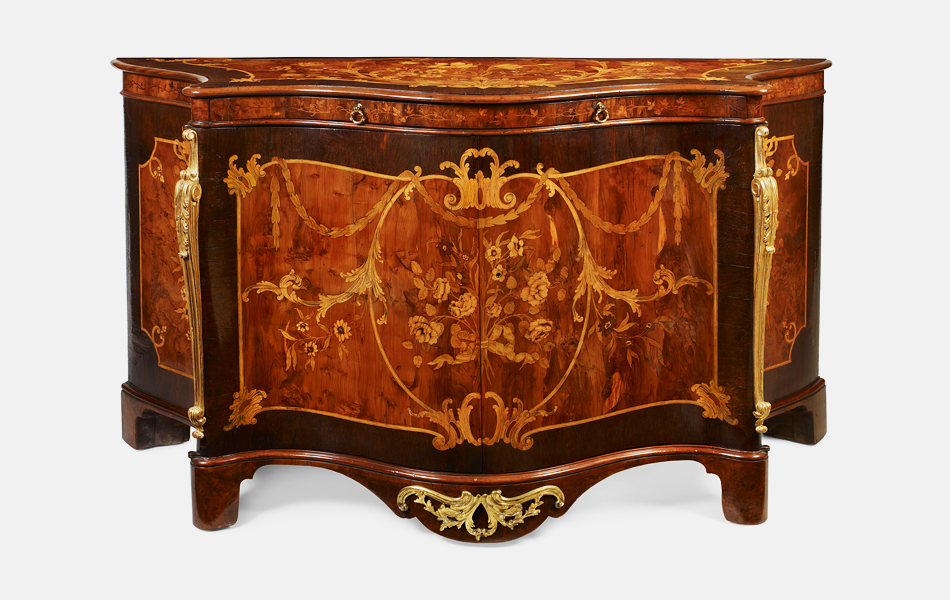 Mallett‘s 18th-century English antiques have drawn collectors from all over the world. This year, the London and New York dealer’s booth features a 1765 inlaid commode attributed to Mayhew and Ince, with original bronze mounts. The undulating front mimics a “cupid’s bow,” says Mallett’s Justin Evershed-Martin, while the elaborate floral inlays, composed of such rare woods as purpleheart and satinwood, are set in a cartouche of yew. “This is the opposite of halfhearted marquetry,” Evershed-Martin says. “It represents the high point of English cabinetry, on par with anything made in France at that time.”

Offered by A La Vieille Russie 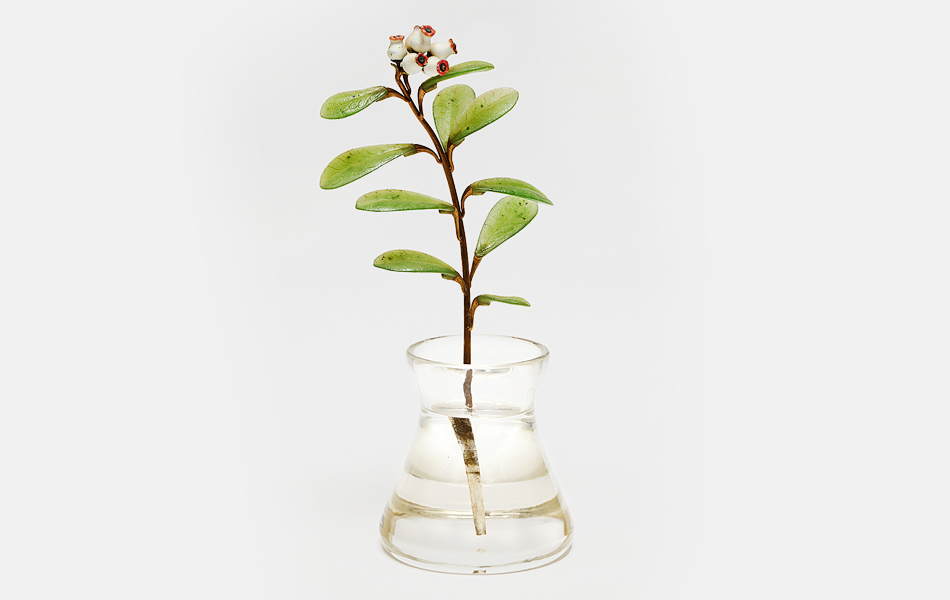 New York gallery A La Vieille Russie has a daphne flower designed by Fabergé work master Henrik Wigström in 1910. “The crystal pot is so clear, it looks like it’s filled with water,” observes the gallery’s Mark Schaffer. And “the nephrite leaves are so finely carved that light passes through them, so you can see the veining. The opalescent, enameled daphne buds with tiny diamonds on top look like they’re about to burst.”

Six Forms on a Circle, 1967, by Barbara Hepworth 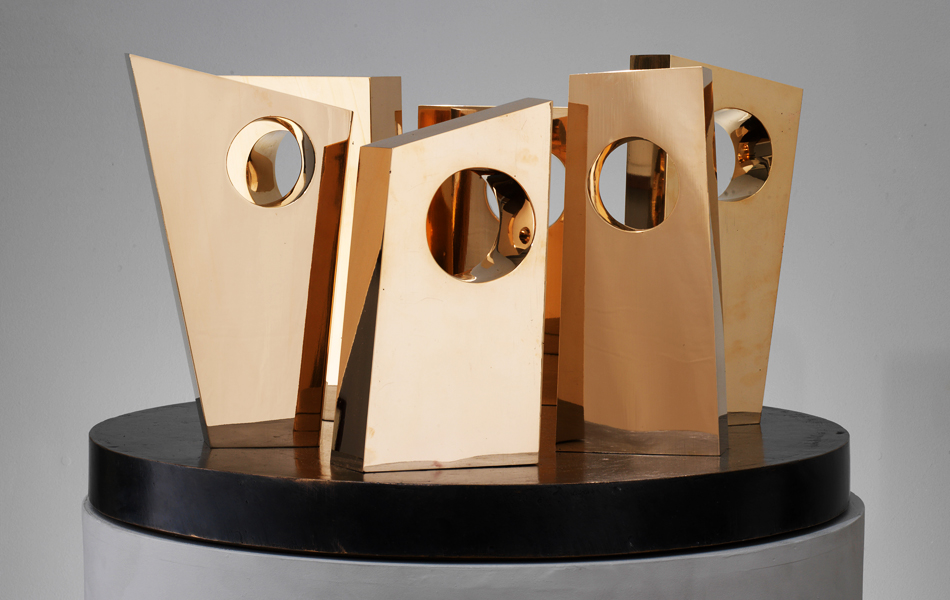 Osborne Samuel Gallery, of London, specializes in modern British painting and sculpture, as this year’s booth makes clear. A signed Barbara Hepworth piece in polished bronze, Six Forms on a Circle, 1967, looks like a miniature Stonehenge but with circular holes in the columns. The bronze pieces are mounted on a matte bronze turntable that resembles a lazy Susan. “Hepworth did a series of studies of reflected forms in the late sixties and early seventies,” says gallery partner Peter Osborne. “These are small, but she did some huge versions. You can see how very deliberately she placed the forms to pick up reflections and bounce light around.” 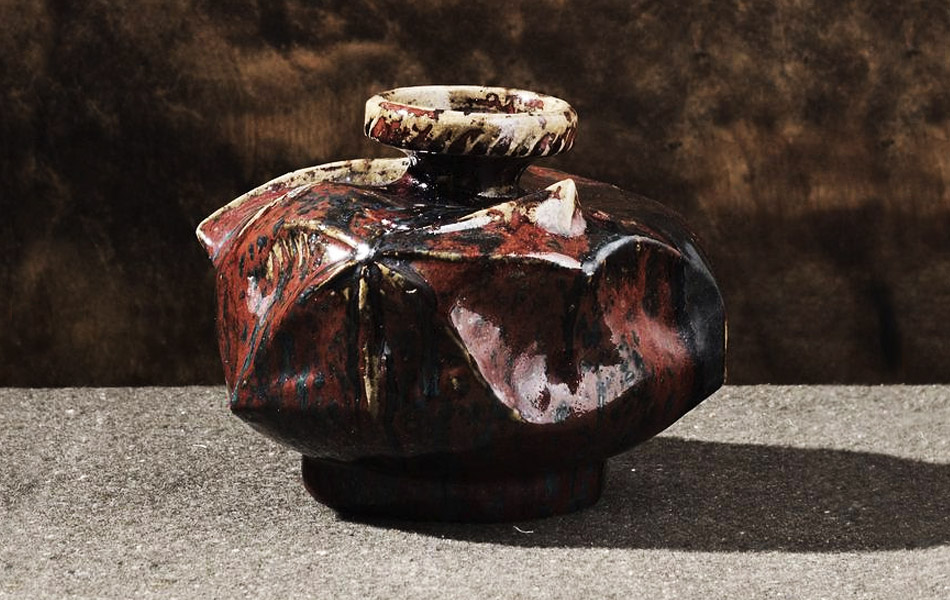 Jason Jacques, of New York, is showing a group of French Art Nouveau vases with sang de boeuf glaze by Pierre-Adrien Dalpayrat, the 19th-century ceramicist known as “the master of Oxblood red.” A gourd-like one with angular sides is titled Tangled Web because its shallow peaks are meant to evoke spiderwebs. “Dalpayrat was the most famous of all the Art Nouveau artists,” Jacques says. “In the kiln, he played with oxidation and reduction to get reds, blues and greens on the same vase. Chemically, it’s the same glaze.” He just fired it in different ways to get the various colors. 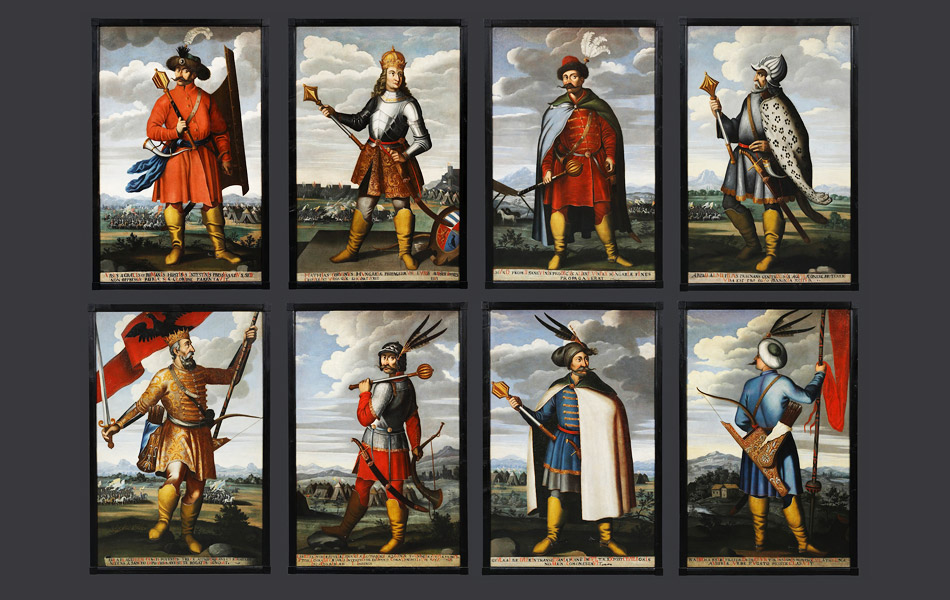 New York dealer Carlton Hobbs has a set of eight colorful life-size paintings by an unknown artist. “They depict previous rulers of Hungary, both actual and legendary, including Attila the Hun,” Hobbs says. “What makes them so remarkable is how their apparel and weaponry demonstrates, rather surprisingly and paradoxically, the stylistic influence of their arch foe, the Ottoman Empire. Turkish garb was so much more beautifully designed and made than Western garb that it proved an irresistible influence on Hungarian fashion, a fact embraced by the artist, who added further exoticism and flamboyance to the costumes.”