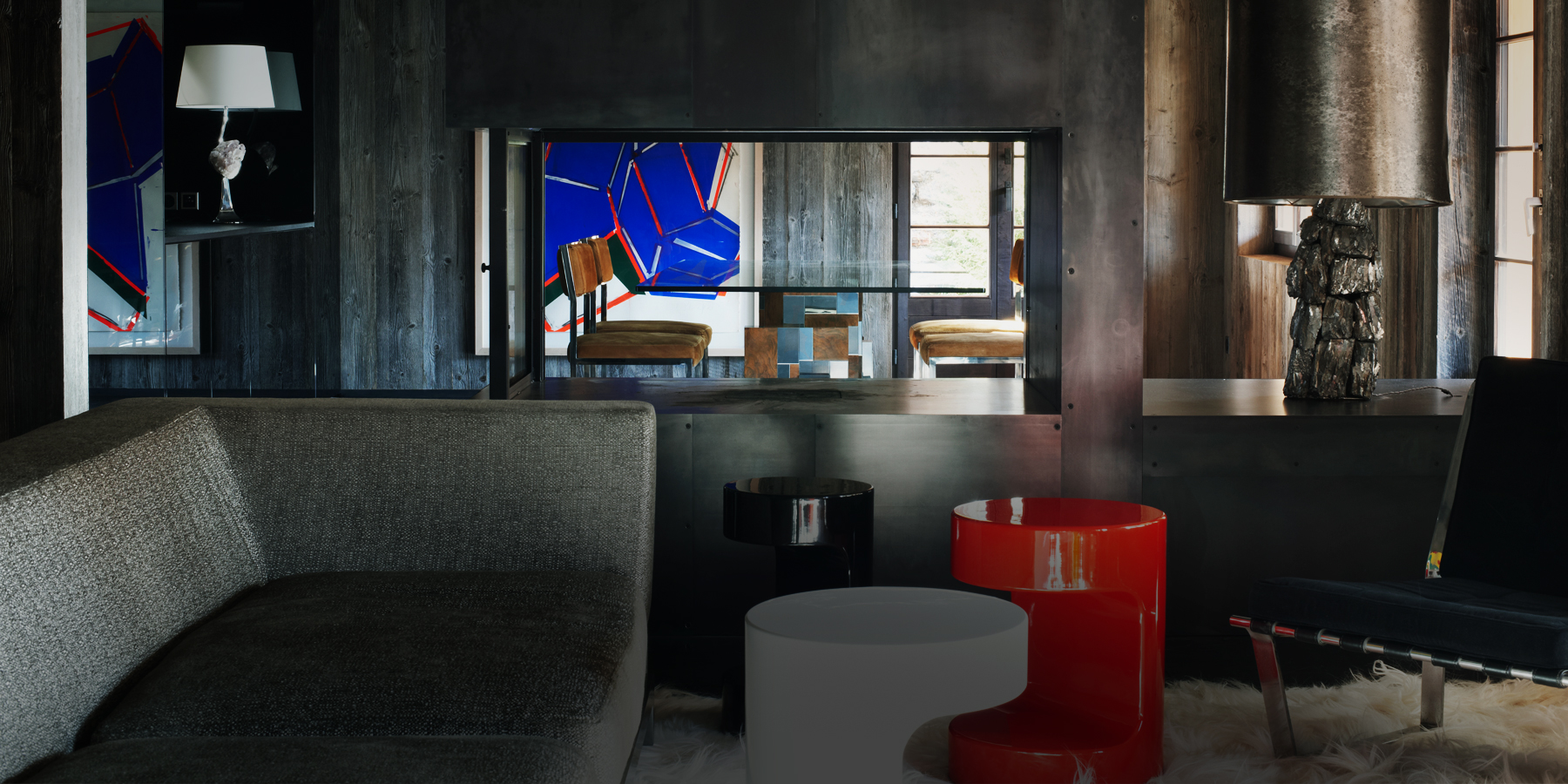 French designer Thierry Lemaire admires and appreciates his aesthetic forebears even as he creates contemporary spaces and furnishings whose sleek and strikingly sensual style has attracted the attention of a decidedly 21st-century high-fashion crowd. 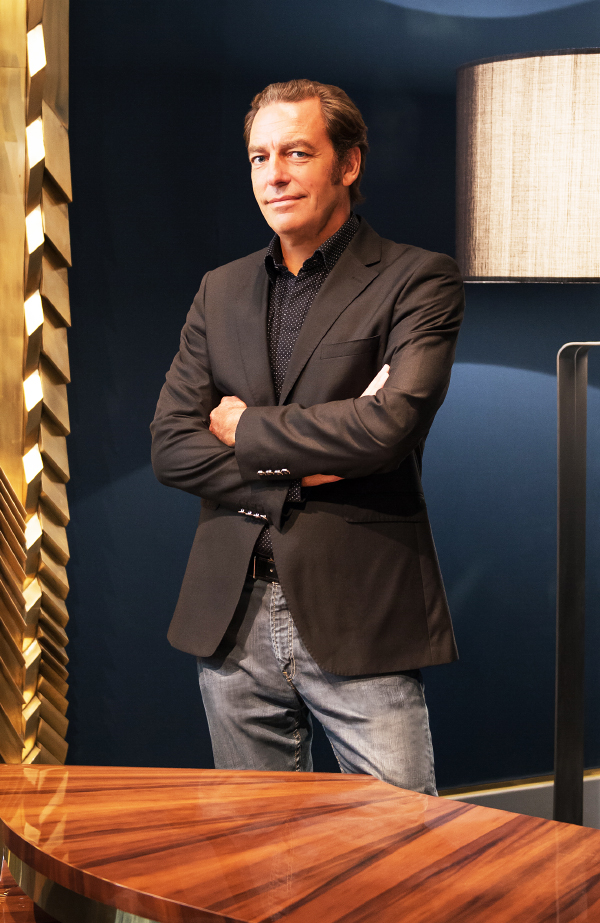 French interior designer Thierry Lemaire undertakes projects in France, Switzerland, Kuwait and Lebanon, among other locales (photo by Xavier Bejot). Top: In a new-built chalet in Gstaad, the designer grouped a Paul Evans table with Willy Rizzo chairs and a painting by Jose Pedro Croft (photo by Adrien Dirand).

Paris-based interior designer Thierry Lemaire wants to make one thing quite clear: He is not nostalgic. In the course of a recent interview, he mentions the fact at least five times.

Yes, he has an overriding love of 1960s and ’70s furniture by the likes of Maria Pergay, Michel Boyer, Willy Rizzo and Paul Evans. But, he explains, this isn’t so much nostalgia as simply an appreciation of great design. “It was a period when architects and decorators were very prolific,” he says. “They had lots of incredible ideas and there was lots of humor and imagination.”

His interest in and use of pieces from the ’60s and ’70s aside, Lemaire, with his sleek and strikingly sensual aesthetic, is very much of-the-moment. Recent projects include the first flagship of one of France’s few remaining couturiers, Stéphane Rolland, which opened in Abu Dhabi last year, and he is currently working on apartments in Geneva and Paris, the interiors of homes in Kuwait and Lebanon, and the ground-up design of a 6,000-plus-square-foot house in Comporta, Portugal.

The past 12 months have seen the launch of Lemaire’s furniture collections for both Fendi Casa and Holly Hunt, and visitors to the Biennale des Antiquaires in Paris in September could admire one of his astrakhan-clad armchairs, as well as a brass-and-fossilized wood occasional table on the stand of renowned Parisian dealer Yves Gastou. A number of his creations, mainly desks and tables, have also been integrated into Fendi’s fashion boutiques worldwide, alongside pieces by the likes of Pergay and Gabriella Crespi. “It’s quite a consecration,” he says of the Fendi connection, “rather like entering into a pantheon of design”.

Lemaire was born in 1960 in New Caledonia, an island in the southwest Pacific Ocean where his French naval-officer father was stationed and where the family lived until moving to Brittany when Thierry was just six months old. The designer recalls a childhood in which he “lived in houses that were very beautiful, though not particularly comfortable. There was a mix of concrete, Directoire chests of drawers and sublime lighting, but we never had a sofa.” Decorating was clearly in his blood: He reports that his mother has always had a flair for it, and his elder sister, Sophie Prezioso, is also an interior designer.

His interest in pieces from the 1960s and ’70s aside, Lemaire, with his sleek and strikingly sensual aesthetic, is very much of-the-moment. 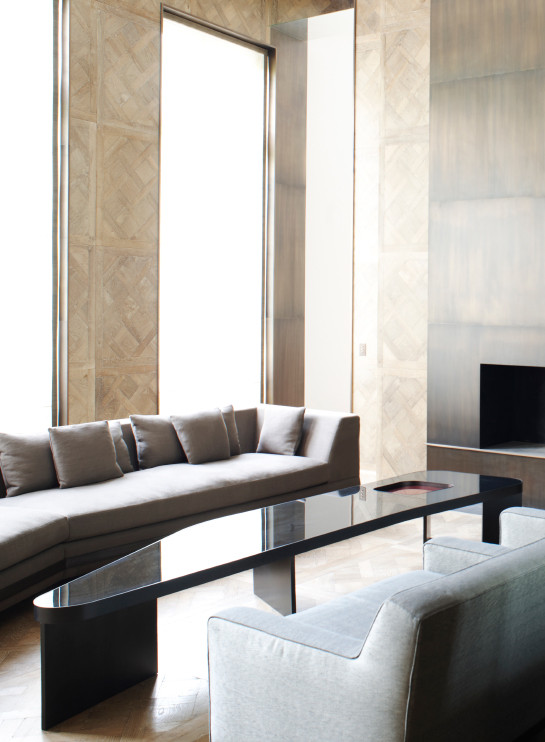 In a sleek Geneva apartment, Lemaire covered the floor and ceiling with paneling from storied Parisian supplier Feau & Cie, coated the chimney in bronze and added a low table of his own design. The 1970s sofa is by Jacques Charpentier, and the armchairs are Christian Liaigre. Photo by Adrien Dirand

Lemaire himself initially embarked on a career as an architect, inspired by a friend’s father, who worked as one. “I thought he had the most fabulous life,” explains Lemaire. “He had a really great flat, which made quite an impression on me. There was a mahogany floor, Plexiglas and chrome furnishings and Surrealist paintings. It’s very similar to my own place today.”

After graduating from the Ecole Spéciale d’Architecture in Paris in 1986, Lemaire immediately set up his own firm. His first projects were purely architectural — namely, a series of mixed-used buildings in the French capital’s western suburbs — but by the mid-’90s, an economic slump had hit, and business started to dry up. He decided to try his hand at interior design instead. Through contacts, he received his first decorating assignment — a 3,700-square-foot flat in Geneva — and he’s never looked back. His commissions since have included a dozen chalets in Gstaad, as well as a spectacular minimalist duplex in Beirut.

Alberto Vignatelli, the CEO and chairman of the Luxury Living Group, which holds the Fendi Casa license, praises Lemaire for “the expressive strength he puts into his work” and “that unique ‘French touch’ that combines tradition with modernity.” Ask Lemaire to describe his work himself and he’ll stress that he always likes to push the envelope, design-wise. “You have to be a step ahead,” he declares. “I try to do things that are original and have three watchwords: timelessness, balance and — if I brag a little — elegance.”

He is particularly noted for his innovative use of materials. He favors dark woods like American walnut and Macassar ebony, lacquer, smoked mirror, bronze and straw marquetry, and he recently completed an apartment in an 18th-century building in Paris in which he clad the walls of the main sitting room in parquet de Versailles and the ceilings of the master bathroom in marble. He also wrapped the bathroom of a Gstaad chalet with Nordic slate, which was sanded and acid-washed to give it a marbled, almost fossilized effect. “Thierry is a master at combining different materials and periods,” notes Stéphane Rolland. “And what’s just as important is that he really listens to what you want rather than pushing his own agenda.”

Many of the items in Lemaire’s furniture collections are derived from one-off pieces he initially made for specific interiors. The idea for the form of his Twist console, for example, originated with a desk he designed for an apartment in the affluent Parisian suburb of Neuilly-sur-Seine. Made from lacquered aluminum and distributed in the States by Holly Hunt, it has a cantilevered ribbon-like shape that almost seems to defy the laws of gravity. “My intention was to create something a little unusual that was also a technical feat,” he explains.

Other pieces display both his love of logic and geometry, as well as his penchant for asymmetry. There are stools with legs of different widths and tables edged with askew bands of brass. One of his designs for Fendi Casa, meanwhile, is the Artù sofa, which stands on a pair of wide, shiny cylinders. Like most of his other sofas, it is of strikingly large dimensions. “Perhaps that’s a backlash against the fact that I never had one in my childhood,” he says.

Ask him, meanwhile, which piece or pieces of furniture by another designer he would love to have created, and he’s got two ready answers: The first is “anything by Jean Prouvé“; the second, the Platner Armchair, conceived by Warren Platner in 1966. “I’ve always lived with one and thought it was amazing,” he says — but not, of course, because he’s in the slightest bit nostalgic.