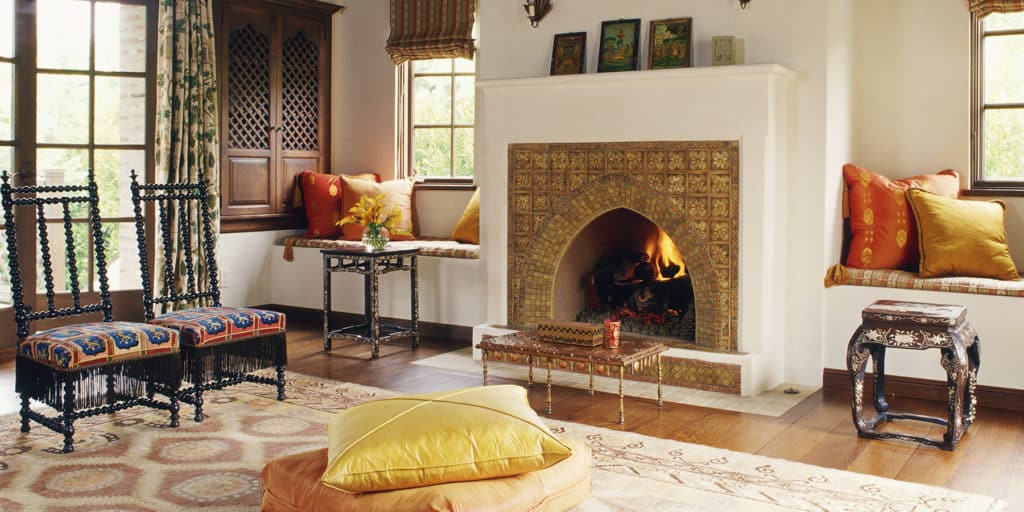 Santa Monica–based designer Thomas Callaway puts his own stamp on the ubiquitous California style by employing ethnic and folk-art elements for a formidable client list of actors, producers, music moguls and collectors. 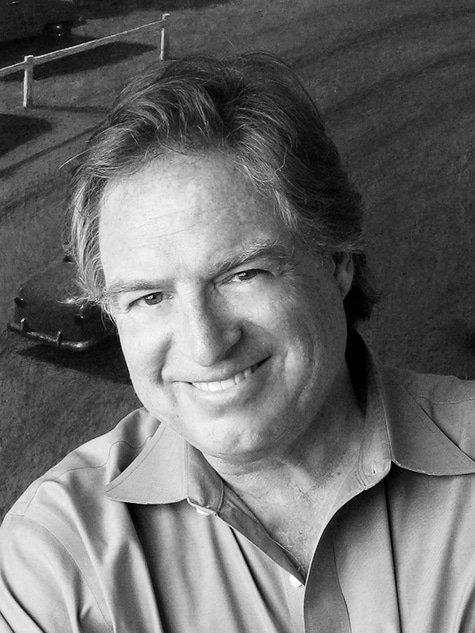 On the eastern side of Santa Monica, there is an industrial neighborhood shared by auto-body shops, production companies, hip art galleries and several private schools. For the past two decades, it’s also been home to the architectural and design firm of Thomas Callaway, who’s best known for his original take on the Spanish-style house. In November, he also opened his own by-appointment gallery filled with exquisite Native American art and artifacts, Spanish Colonial religious paintings, furniture of his own design, a few choice vintage chairs, paintings by the likes of Warhol — essentially, as the gallery’s very name indicates, Stuff Tom Likes.

“I’ve collected so many things over the years, and my house was full,” says Callaway, who possesses a commanding physical presence, a discerning eye and a gentle personality. With Callaway, what you see is what you get. He handles much of the day-to-day architectural and design operations himself, though his right-hand woman, Jan Word, helps keep him inspired and organized. He is amiable, warm and easy to read, and when asked to describe himself, he says he is endlessly curious, ambitious and honest. He spent 20 years as a successful television and film actor in New York and Los Angeles, but he doesn’t want to talk about that. He wants to talk about houses.

“On almost every job I start, I identify and consider the style of the house, what the original intent was, and then I strip it back to that — or add it in where it’s lacking — to get the bones of the project right,” says Callaway, who greatly likes to tackle the architecture, interior design and landscaping as part of a cohesive vision, though he does take on separate architectural and design projects. His clients include actors (some he met on set), producers, music moguls and knowledgeable collectors. The taciturn film producer Alan Ladd, Jr., whose Callaway-designed Beverly Hills residence was published in Architectural Digest in 2010, called his work “fabulous.” 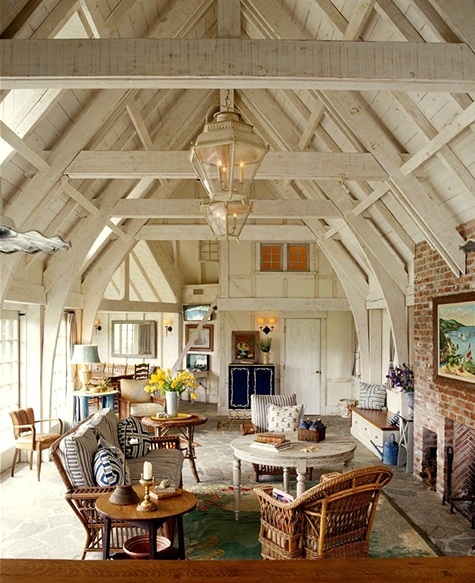 For another Los Angeles client, Callaway outfitted a French Normandy-style poolhouse with a rattan sofa and chairs and a Swedish country center table from the L.A. antiques store Lief.

As is the case with so many architects and designers, Callaway says art was his first love. Given his familiarity with Spanish-style design, one would assume that he grew up or at least attended school in a sunny clime surrounded by palm trees. In fact, he was born and raised in Appleton, Wisconsin, where he also attended Lawrence University. Early in school, Callaway leaned toward drawing, painting and acting. However, he says, “Wanting to be an artist or an actor is not something you say in Appleton.” A year spent in the Netherlands, in an experimental art-based program in Haarlem, proved to be enormously formative and honed his creative focus even further. “Everywhere I turned, I was completely absorbed by the architecture,” he says.

Back home, Callaway still needed a path out of Appleton. “Acting took me from the Midwest to New York City,” he says. There, he got his first taste for crafting interiors, first designing his own apartment and then helping to spruce up those of his friends. “Designing spaces was like breathing to me,” he says. Soon, what was a budding interest “kind of exploded.” He and his wife, actress Claire Malis Callaway, and their young son, Catlin, headed west to Los Angeles, where Callaway created for his family his own contemporary version of the area’s most prolific vernacular architecture: the Spanish-style house.

With its verdant central courtyard leading to an adobe-walled interior filled with folk art and Spanish retablos (small devotional paintings) beneath an open-beam ceiling and a roof of Saltillo tile, the small but distinctive home quickly attracted magazine and book editors, and it was repeatedly published — in House Beautiful, House & Garden and photographer Tim Street-Porter’s book The Los Angeles House, among others. Although Callaway was just doing what came naturally, he says, “It was a test for a career I didn’t know was coming.” Hence, in that first little magical Spanish house, Thomas Callaway Associates was born.

“I try to get to know the best of every style, so I can create houses that look like they belong right where they are.” 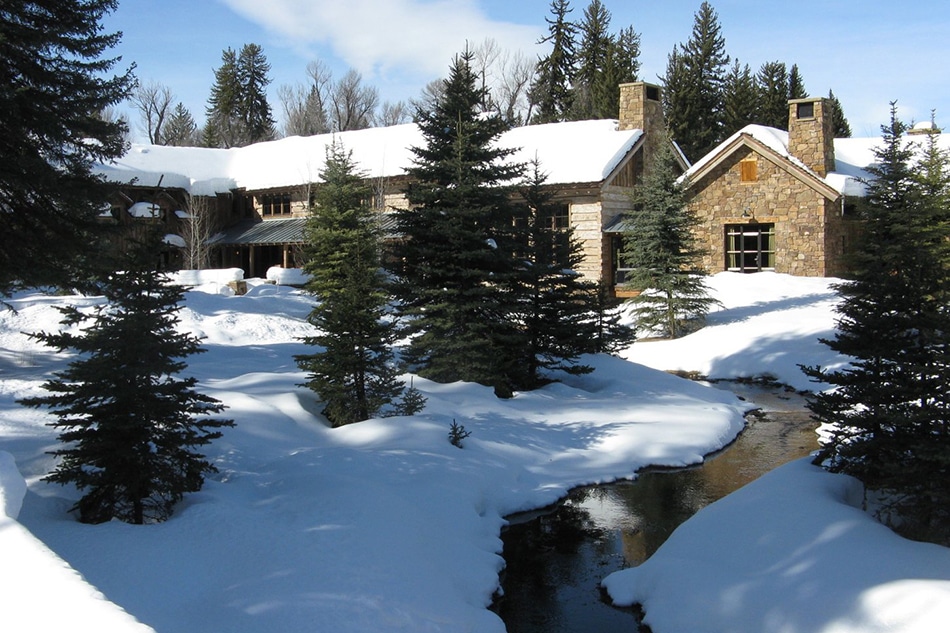 Callaway arranged for a small stream to be diverted so that it would run beneath two wings of a Jackson Hole stone-and-log mountain residence of his design. Photo courtesy of Thomas Callaway Associates 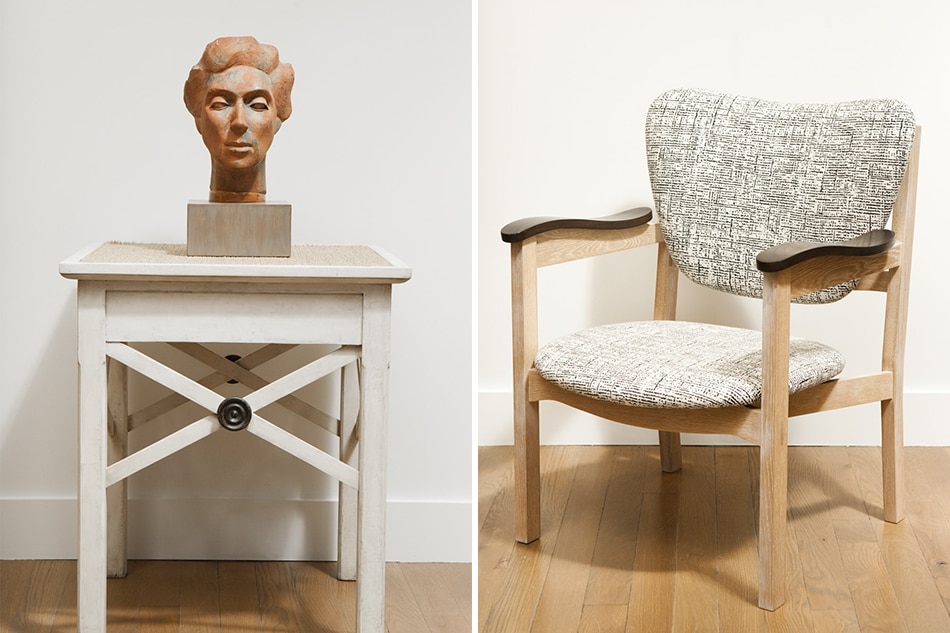 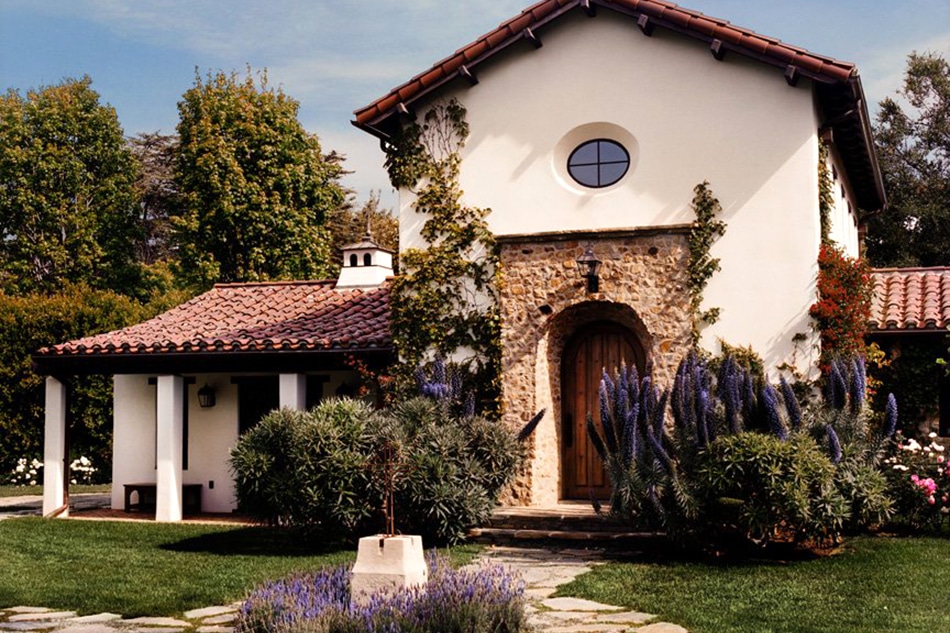 Callaway designed the architecture, landscaping and interiors of a Los Angeles residential compound that features its own private chapel, seen here. Photo by Lisa Romerein 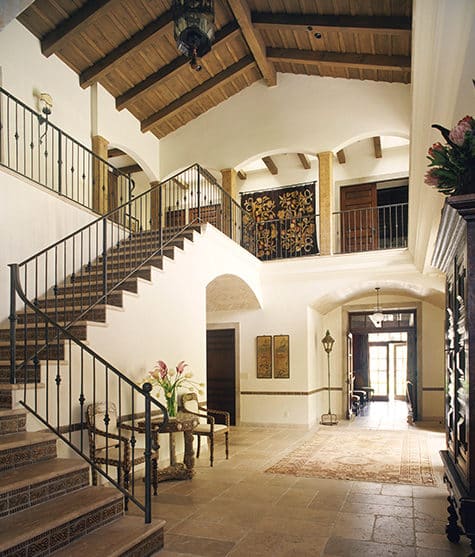 “The only thing wrong,” says Callaway, “is that just as an actor gets typecast early, suddenly I was known for the California Spanish rancho-style house, and everyone wanted to reproduce it. After a few years I had so many similar requests, I decided I was just going to say no until something else came along. It was scary at first to say no to anything. It may even have hurt my career, in terms of being known. But then projects started coming that were completely different from the others in style, size and character: Elizabethan and Victorian cottages, then a Federal-style compound. It was an opportunity to do considerable research and grow.”

Callaway still does Spanish-style houses, but on his own terms and always with a fresh take. For Rhino Records founder Richard Foos and his family, for example, Callaway turned an unfinished spec house overlooking Mandeville Canyon into a home with Spanish DNA and Indian, Gothic, Moroccan and Moorish accents. “The clients wanted a Spanish house, but they wanted it to have soul,” says Callaway. “To give it that soul, we explored what kinds of ethnic excitement we could bring in to push boundaries.” One of those boundary-pushing elements is encountered right up front: The entrance hall’s barrel-vaulted ceiling, inlaid with limestone bricks in a herringbone pattern, evokes not Spain, but Fontainebleau, giving the house a depth that a slavish interpretation of the Spanish style could never reach. 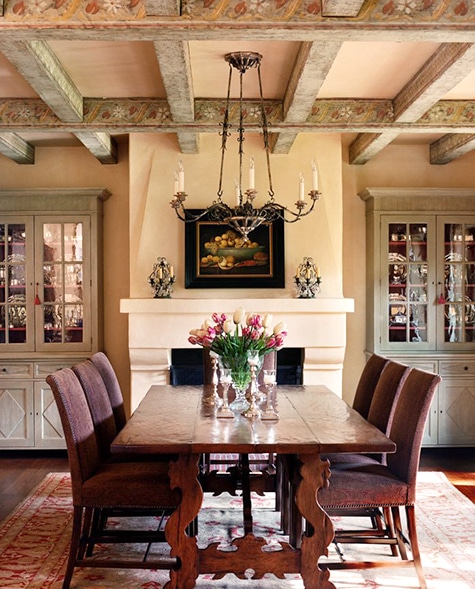 Callaway designed the architecture and interiors of this Los Angeles residence as well as the matching Swedish-style cupboards in the living room; the chandelier is by Panache, the table by Rose Tarlow and the dining chairs are from Dessin Fournir. Photo by Lisa Romerein

Callaway’s own studio is enlivened by images of his current and recent projects — ranging from a log-and-stone compound built over a stream in Jackson Hole to the penthouse atop an ultramodern high-rise overlooking Navy Pier in Chicago – displayed near rolls of neatly drawn plans. A front conference area that feels like a cozy living room reveals the designer’s knack for mixing periods and styles: precious Paris flea market mirrors and tables mingle with generous leather club chairs of Callaway’s design that are draped with original Pullman train blankets. Tucked in the back, his private desk – “my absolute bedlam,” he says – bears the clutter of a creative type in the midst of several projects. When I tell him I don’t trust anyone with a clean desk, he replies, “Then you must trust me implicitly.”

In addition to his daily design work, Callaway sits on the board of the Southern California chapter of the Institute of Classical Architecture, and participates in the annual Design Leadership Summit, in which a group of respected architects and designers (Timothy Corrigan, Marc Appleton, Lee Mindel and Amy Lau among them) gather in cities such as Charleston, New Orleans, Venice and Copenhagen to ponder and celebrate the area’s design and architecture. “It recharges my batteries,” says Callaway.

He has recently introduced new pieces to his furniture line, such as the sturdy Copenhagen chair with Danish lines and an increased scale, and he’s producing his own collection of textiles. And, most importantly, there are the current projects, among them a Cape house in Santa Monica and additions to French Country and Spanish homes in Beverly Hills for repeat clients. “It takes a lifetime for anyone to absorb the knowledge and history and sensitivity that make up all the different architectural styles,” he says. “I try to get to know the best of every style, so I can create houses that look like they belong right where they are.”