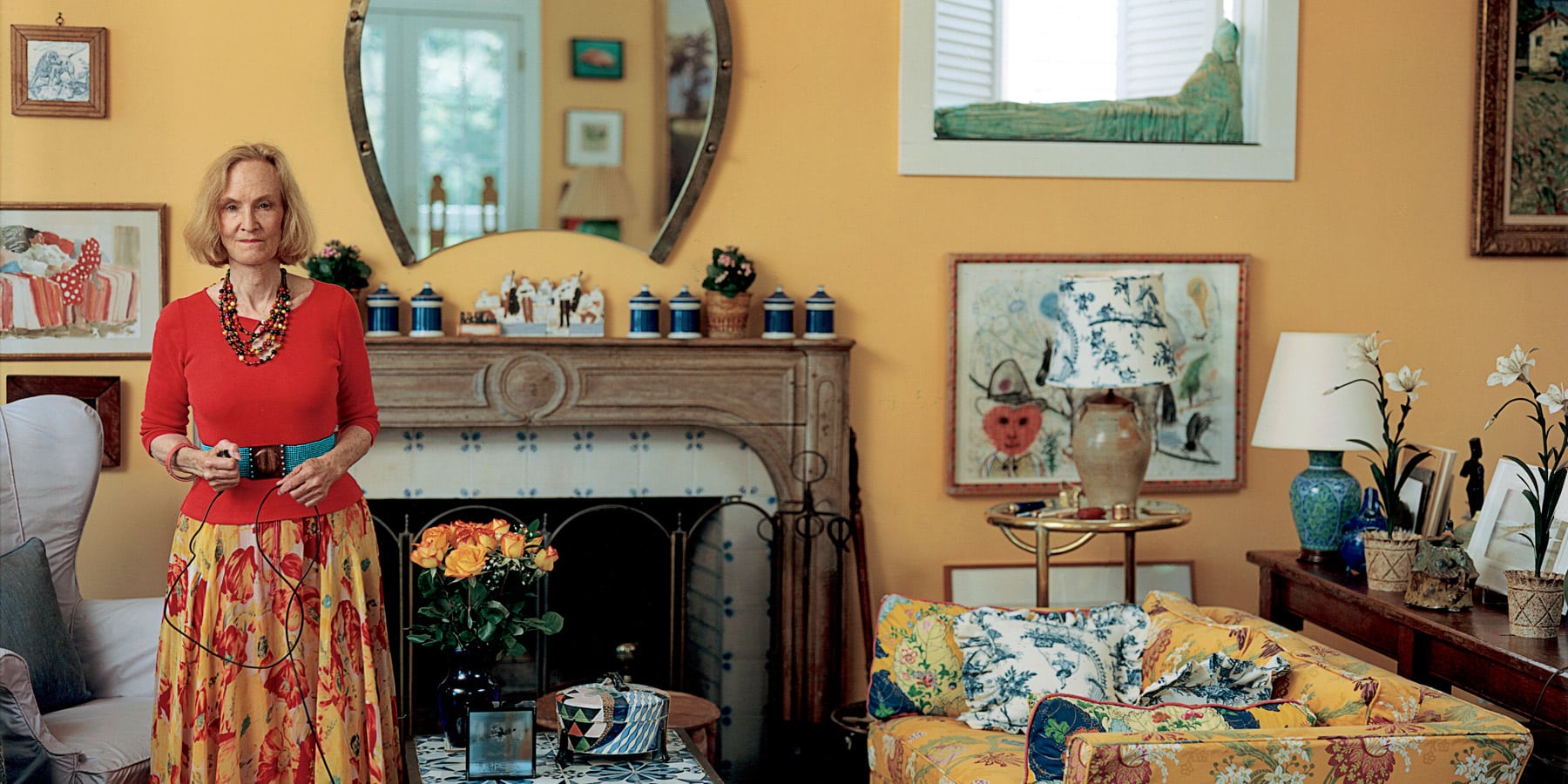 This contemporary chronicler of the affluent captures her subjects in their natural habitats — although not necessarily at their happiest moments.

Since the 1970s, Tina Barney has been photographing the wealthy denizens of Watch Hill, Rhode Island, where, to a remarkable extent, time has stood still. As she writes in the introduction to her new monograph, Tina Barney (Rizzoli), “I find myself standing in the same place I photographed thirty-five years ago, and the same chair is in the same corner it was in then. People look the same, dress the same, act the same.”

Given the glacial pace of change in her milieu, it’s remarkable how much action Barney captures in her photos. These are anything but still lifes.

In The Bridesmaids in Pink (1995), the three attendants display expressions ranging from anticipation to annoyance. In The Red Sheath (2001), the wearer of the titular dress appears to be fed up. Family members exhibit as much enmity, or indifference, as they do affection, and the photos are like mystery novels, challenging viewers to guess what led to what. None of this is accidental. “The synchronization of the psychological, emotional, and sociological plots that bind a family together has always been my primary purpose,” writes Barney, who is represented by New York’s Paul Kasmin Gallery. 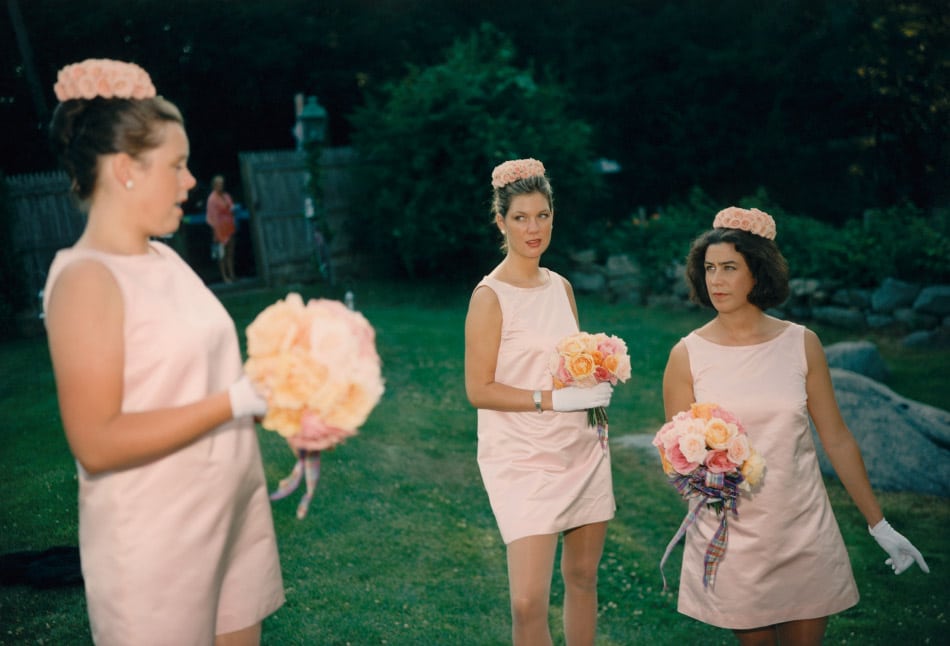 A new Rizzoli monograph by photographer Tina Barney gathers together some 150 portraits taken over three decades. Many of these come from shoots in the most rarefied social strata of Manhattan; Europe; and Watch Hill, Rhode Island. Others featured in her 2005-to-2012 series capturing patriotic rituals in small-town New England. Above: The Bridesmaids in Pink, 1995. Top: A 2014 self-portrait. All photos by Tina Barney, courtesy of Rizzoli

She might have mentioned the other kinds of plots — the real estate — and what stands on them. Watch Hill’s shingle-style houses are large but, in Barney’s images, claustrophobic. A place to rest, for example, becomes a kind of web in Ada’s Hammock (1982). Within the houses are serious artworks. In The Reception (1985), wedding guests are posed in front of Pablo Picasso’s Portrait of Angel Fernández de Soto (The Absinthe Drinker), which sold at Christie’s London in 2010 for more than $46 million.

What makes the photo fascinating is the lack of personal interaction. The three protagonists are staring at an unknown something. It’s that kind of odd arrangement that makes Barney’s photos intriguing and her compositions compelling.

The intensity of feeling revealed in Barney’s photos is especially remarkable given that she doesn’t sneak up on her subjects. She works with large-format cameras, in which film cassettes are inserted after all the elements are in place. Those elements include lights and reflectors, which can take an hour or more to set up. And they include the subjects themselves. 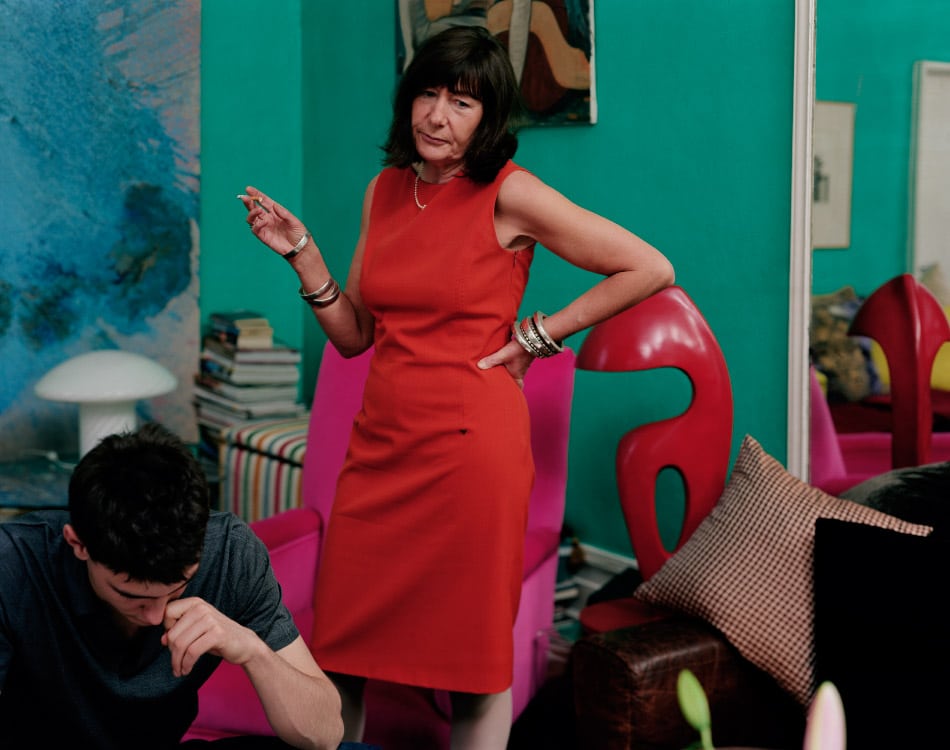 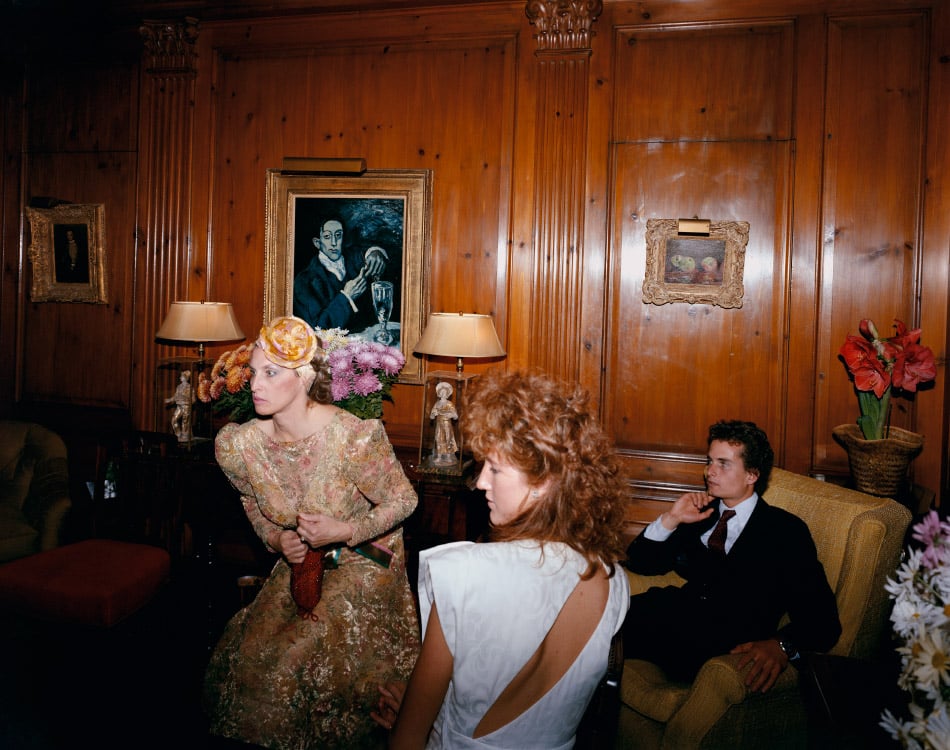 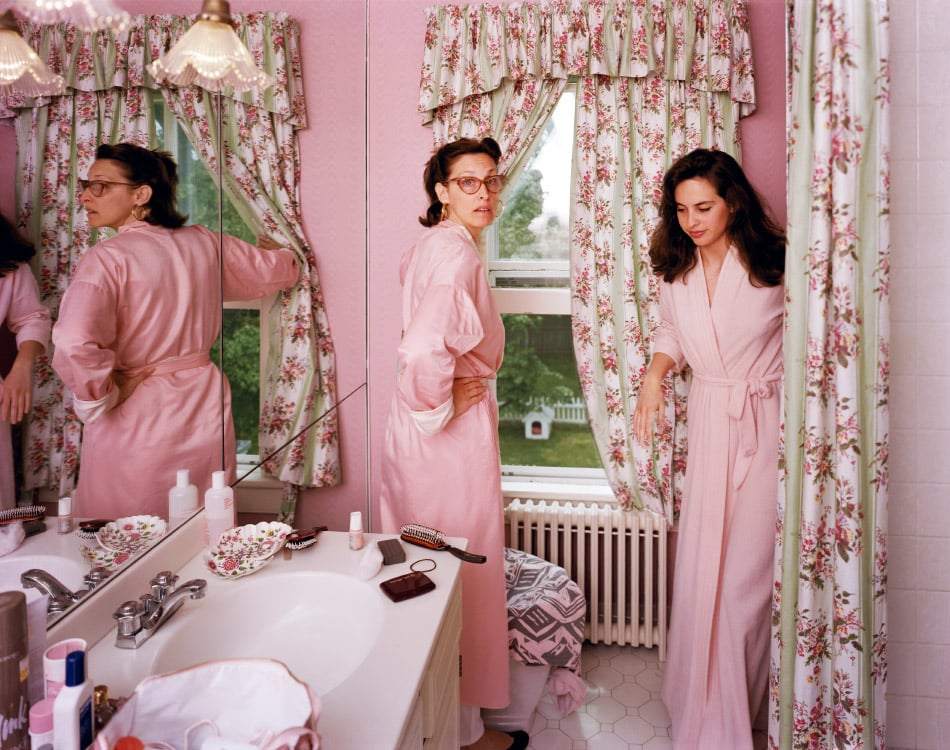 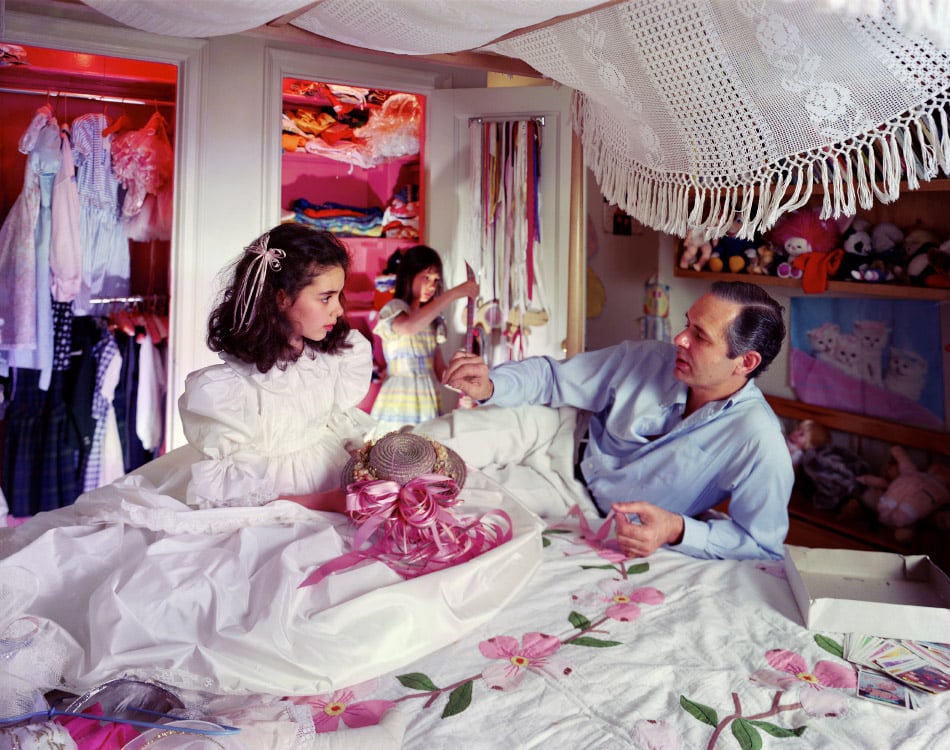 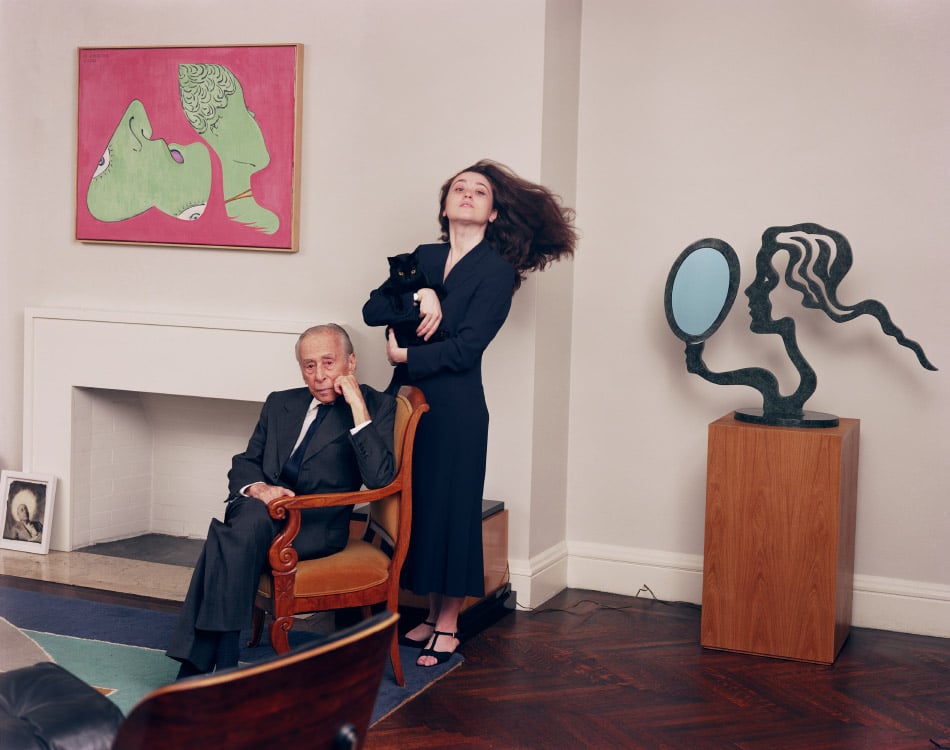 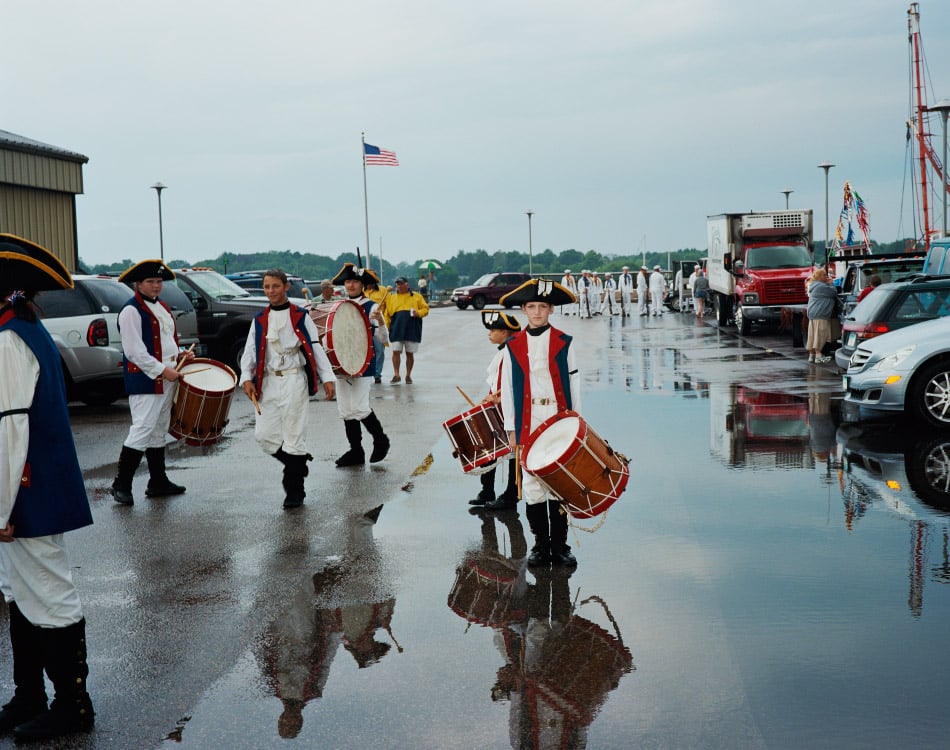 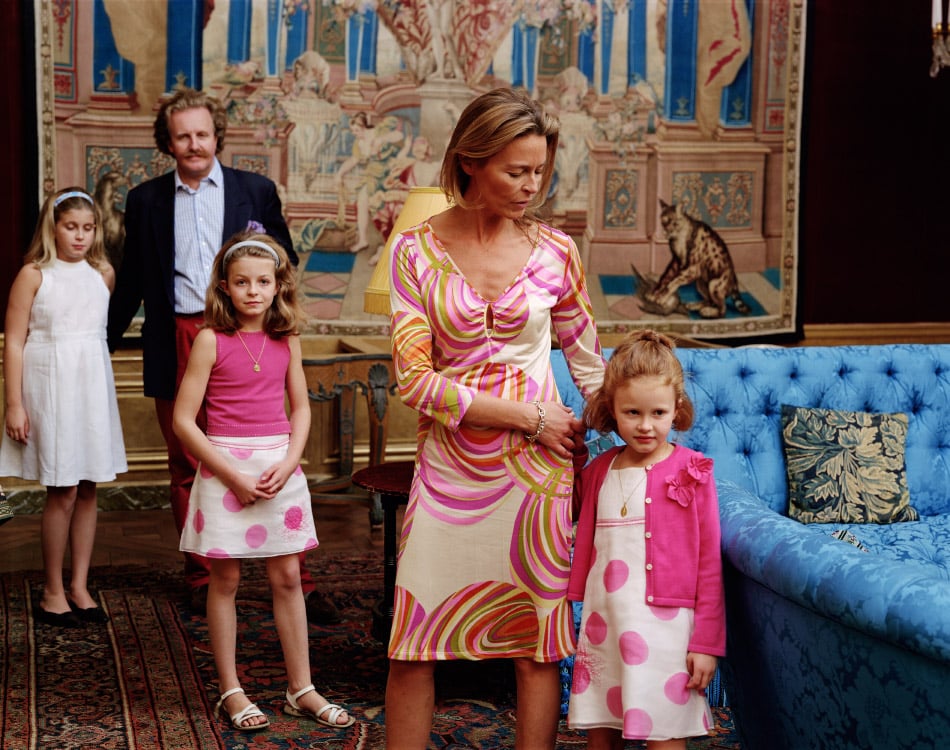 Less a fly on the wall than a commanding officer, Barney writes that the only way she could get the compositions she wanted was “by pushing people around and by sometimes moving furniture or objects.”

Psychologically, Barney’s approach may be a way of exercising control over an environment that would otherwise have controlled her. As a young bride in the early 1970s, Barney spent time in Watch Hill, the hometown of her husband, John Joseph Barney, and she volunteered at New York’s Museum of Modern Art, where, she says, she was first introduced to fine art photography. Soon, she was collecting photos; early purchases included works by Ansel Adams, Imogen Cunningham and Edward Weston. In 1973, she moved with her husband to Sun Valley, Idaho. But a life of skiing wasn’t enough for her, so she began studying with well-known photographers at the Sun Valley Center for the Arts.

“I find myself standing in the same place I photographed thirty-five years ago, and the same chair is in the same corner it was in then.” 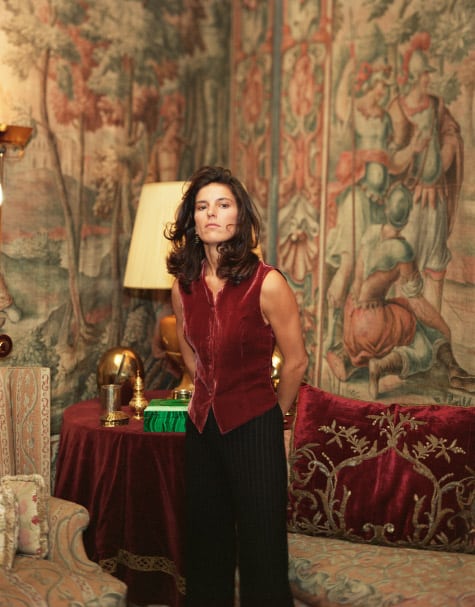 Summers were spent back in Watch Hill, where she began photographing in earnest. (By the 1980s, she was divorced and spending most of her time in Manhattan.) Only rarely did she venture, photographically, into the unknown, and even then she didn’t venture very far: The pictures in the monograph’s “Abroad” section capture the lives of European aristocrats. Her “Athletic Rituals” series presents the Watch Hill folks on ice rinks and miniature-golf courses. Clearly, Barney wasn’t about to do anything rash. “When I choose a subject,” she says, “I stay with it for years because I just don’t think I’m ever done.”

Perhaps her most atypical series is “Small Towns” (2005 to 2012), for which she traveled around New England “looking for evidence of the patriotic rituals that families take part in, and that hold them together” — including Renaissance fairs, Civil War reenactments and Fourth of July parades. Here, she photographed strangers for the first time. The strangers seem as accommodating — which is to say only grudgingly so — as Barney’s Watch Hill regulars.

Barney has preferred to have her photos printed very large — often four by five feet. That allows visitors to museum and gallery shows, and those lucky enough to own her works, to enter into her world. Peter Galassi, former chief curator of photography at MoMA, writes in the book’s afterword that its pages “can barely hint at the experience of standing in front of” a full-sized Barney print.

Still, the monograph does a pretty good job of it. The book’s nearly 150 pictures track Barney’s emergence as an artist particular not just to a place but to a time. She arrived on the scene before the era of the selfie. That development, she writes, “quickly altered people’s reactions toward me and my camera. The mere act of asking people if I could take their picture became a foreign gesture, and I had to face the fact that photographic portraiture had changed forever.”

The appeal of her portraits goes far beyond the immediacy provided by the iPhone. In the late 1980s, looking to discover the difference between photography and painting, she sat for an oil portrait. She reports: “In a finished painting, the eyes are an accumulation of the time it took to make the portrait, as opposed to in a photograph, where they are the result of the fraction of a second it took to press the cable release.”

But that understates the impact of her photos, in which the eyes are the accumulation of the time between asking her subjects to pose and pressing the cable release — which can be minutes or hours. Barney has told interviewers that in her next life, she would like to be a painter. But she has been painting all along.