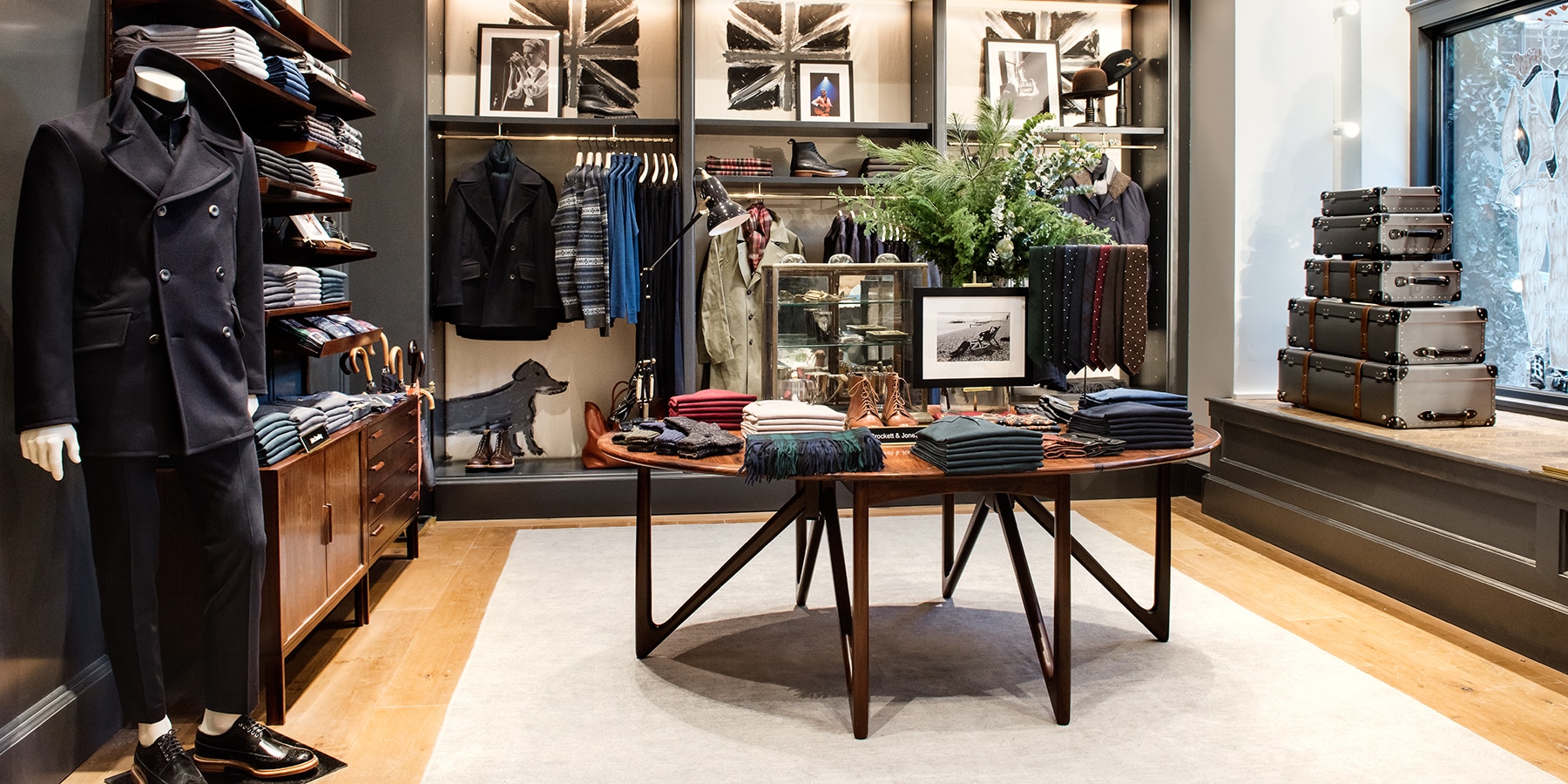 Todd Snyder Curates a Lifestyle for the Thoroughly Modern Man

The noted menswear designer’s new Manhattan store offers everything from wardrobe essentials to haircuts to mid-century furniture he found on 1stdibs. 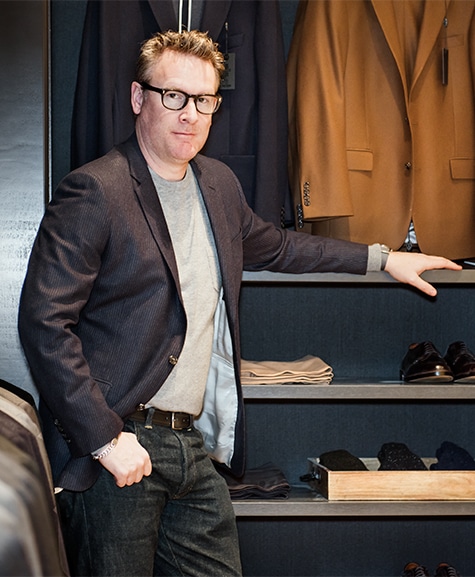 Todd Snyder’s new menswear store in Manhattan offers his eponymous clothing line as well as items from his favorite brands and a rotating collection of furniture from 1stdibs. Top: In the store, products are displayed on a 1950s Kurt Østervig rosewood dining table Snyder acquired from J.F. Chen.

The fashion designer Todd Snyder hails from Iowa, and unpretentiousness is a key element in his brand. “I pride myself on very stylish menswear without it being over the top,” says Snyder. “That’s where my Midwestern roots come out.”

Since starting his own brand in 2011, after a long designing career at well-known fashion companies, Snyder has been on a dramatic upward trajectory, winning numerous awards for his smart-looking update of menswear essentials. The cool jeans in his Selvedge Denim line, his on-point bomber jackets and just-so-masculine accessories, like a brass money clip, all evidence a sensibility that is newly on display in a big way in his just-debuted flagship store on Madison Square North in Manhattan, itself a statement piece in more ways than one.

The vibe is collaborative and team-oriented to an unusual degree. This is no fashion diva solo show. Snyder’s own clothes may be the focus, but the store also features items made by other brands he likes — watches, shoes and eyewear — and contains a cafe/bar plus a place to get a haircut, too.

The creation of the shop’s look was also a collaboration. Snyder and his longtime interiors specialist, James Mills, worked with 1stdibs to fill the space with modern design treasures, which will be updated by them on a rotating basis. And they’re all for sale, reflecting Snyder’s interest in offering his ideal customer a complete set of tools for a well-rounded life.

“This store doesn’t carry everything, but we carry the stuff a guy really needs,” says Snyder. “We want to be the curator for the guy. He can get a great suit and a haircut, a pair of shoes from the United Kingdom and maybe a piece of furniture, too. “We’re acting as a filter,” he adds. 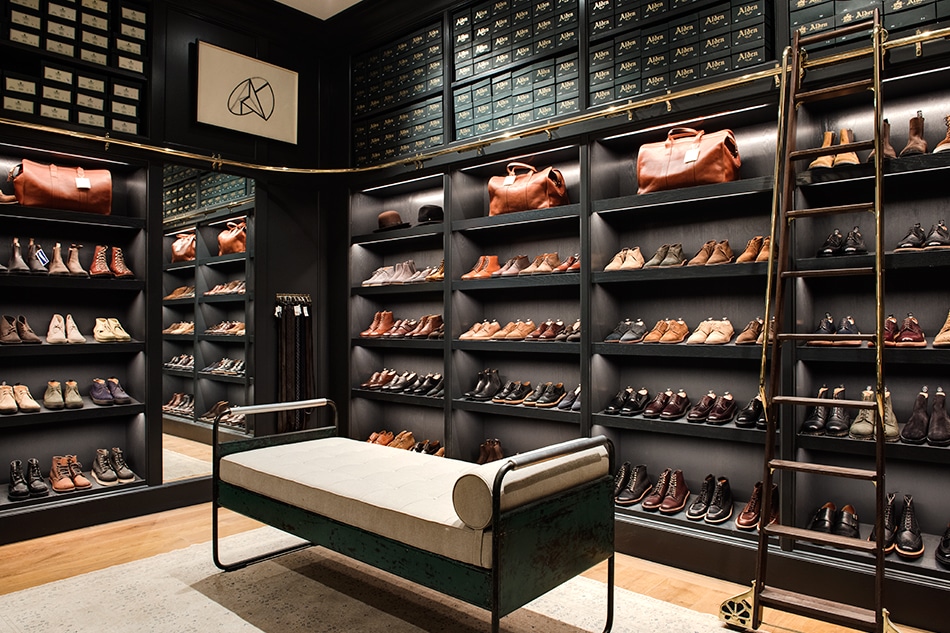 Amid floor-to-ceiling shelves of shoes is a ca. 1935 Jean Prouvé Model 17 daybed from Galerie Half. 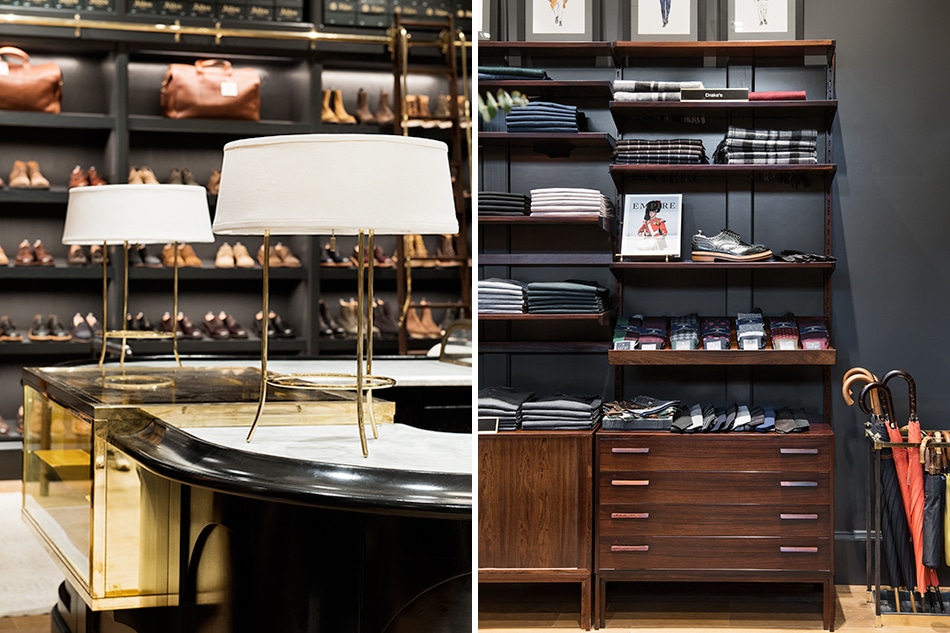 Left: These table lamps are by T.H. Robsjohn-Gibbings. Right: Ties are displayed on a case piece by Lawson-Fenning. 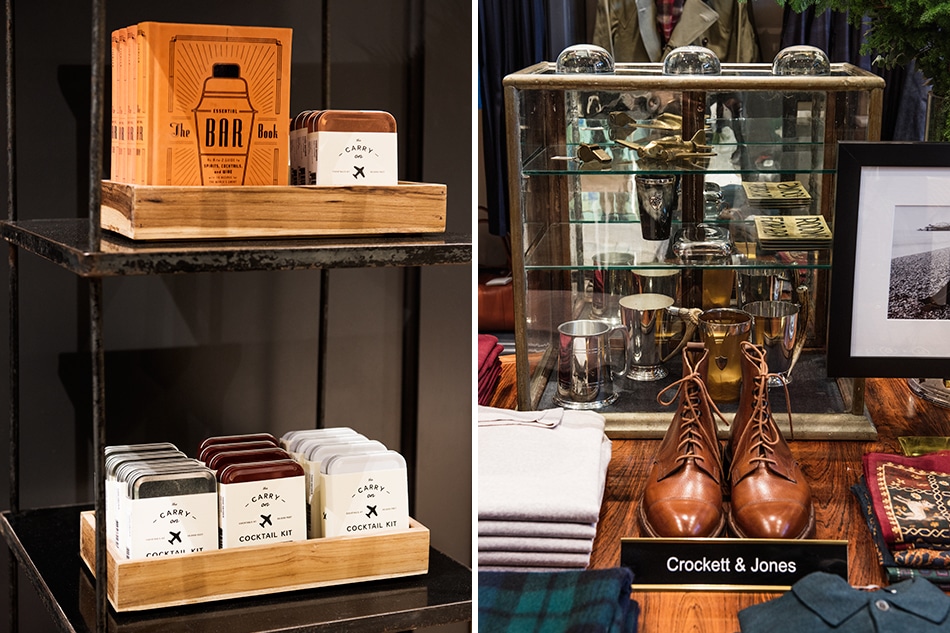 Left: Copies of The Essential Bar Book by Jennifer Fielder are paired with Carry On Cocktail Kits by W&P Design. Right: English shoe company Crockett & Jones is among the brands offered by Todd Snyder. 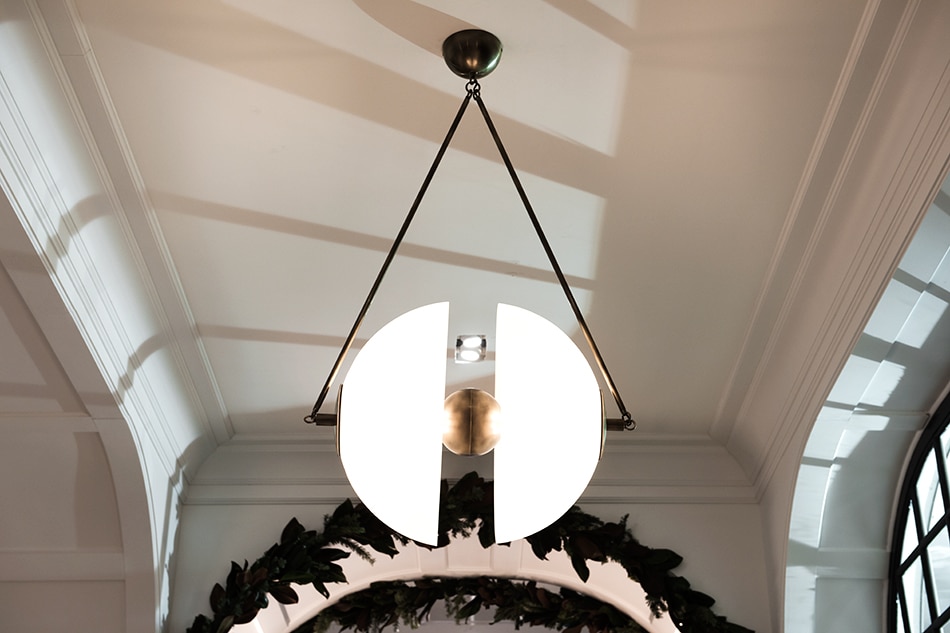 In addition to mid-century treasures, the store features contemporary pieces like this Synapse light fixture by Apparatus. 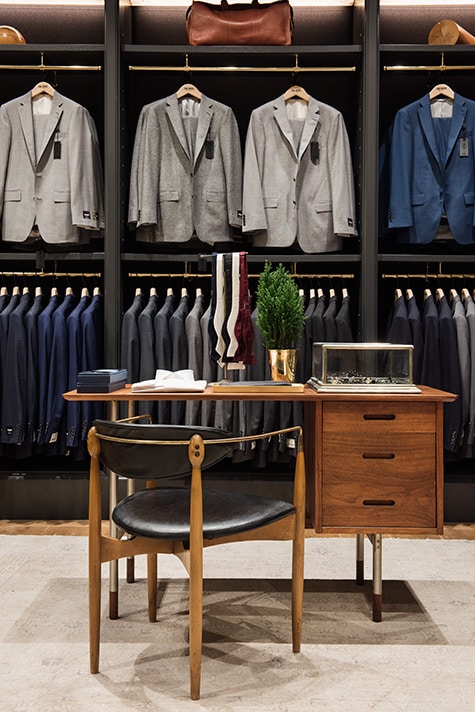 A vintage Arne Vodder walnut desk is positioned in front of a wall of suit jackets.

As it happens, one of Snyder’s favorite filters is 1stdibs. “I’ve been buying from the site since it started,” he says. “They are the best curators of interiors. They take a lot of work out of the process — I don’t have to travel everywhere to find things.”

So you might say that the items adorning the new Todd Snyder flagship have been double-filtered: first by the site and then by the designer. “I know the stuff my guy will want,” Snyder says. (The first iteration of the curated collection of objects selected by Snyder can now be found on 1stdibs.)

The style is decidedly modern, with a focus on French and Scandinavian pieces from the 1940s and ’50s. These are nicely tucked into the tailored-seeming 4,500-square-foot store, wallpapered with gray fabric that recalls a man’s suit.

“I love a somewhat minimalist look, as I always feel like I’m over-cluttered,” says Snyder, although it’s hard to imagine the designer, known for clean-lined masculinity, in the middle of a mess. “I love mixing worlds together, pairing mid-century with something else.”

In the shoe area, Snyder has placed a knockout item from the great Jean Prouvé, the 1935 Model 17 daybed, which he had reupholstered in a beige linen. “This is my favorite piece, with its industrial feel,” he says. “It will probably go first. It’s very rare.”

In the dressing rooms, Børge Mogensen’s 1950s King of Diamond corner chairs are the perfect shape and scale for getting into and out of Snyder’s clothes. Cashmere sweaters are neatly folded on Kurt Østervig’s 1950s rosewood dining table. Snyder intends to accessorize some of the furniture with bracelets, cufflinks and backgammon sets. 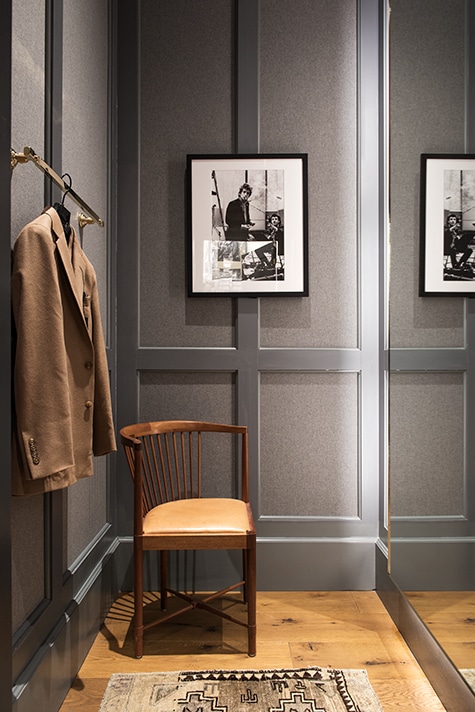 There’s a serendipity at work with the layout and design of the store that reflects the origin of the project. Snyder lives just a couple of blocks away. “That’s how I discovered the space,” he says. “I walk through Madison Square Park every day, I love it so much. I was thinking, ‘I wish there was a way to open a store here’ — and then I saw a for-rent sign.”

A collector of photography and paintings, Snyder developed his love of aesthetics early. “My mother is an artist, and I was always interested in art and good at it,” he says. “My dad was an engineer. That made me who I am — a blend of the engineering and the artist.”

That combination led Snyder to study architecture. “But it was too boring and slow,” he says, laughing. He moved to New York and got involved in fashion, landing a succession of jobs at J. Crew, the Gap and Ralph Lauren that honed his skills. Now, he has had his own brand for five years, and the new store, he says, represents “how we’re just exploding.”

Having his own space has had a side benefit, too. “It’s gotten me back into interiors again,” he says, pointing to some chic candle sconces backed by mother-of-pearl panels. He doesn’t take credit for every smart choice, however, citing the influence of Mills. “He knows so much more than I do,” Snyder states. “He’s an amazing talent.”

Snyder’s ability to play well with others has significantly contributed to his success — as has his indisputably refined eye.

He describes his design and business philosophy this way: “Make sure it has heart and soul and isn’t too expensive. Work with a lot of great people to distill it down — and then distill it down again.” It’s a thoroughly modern mantra.