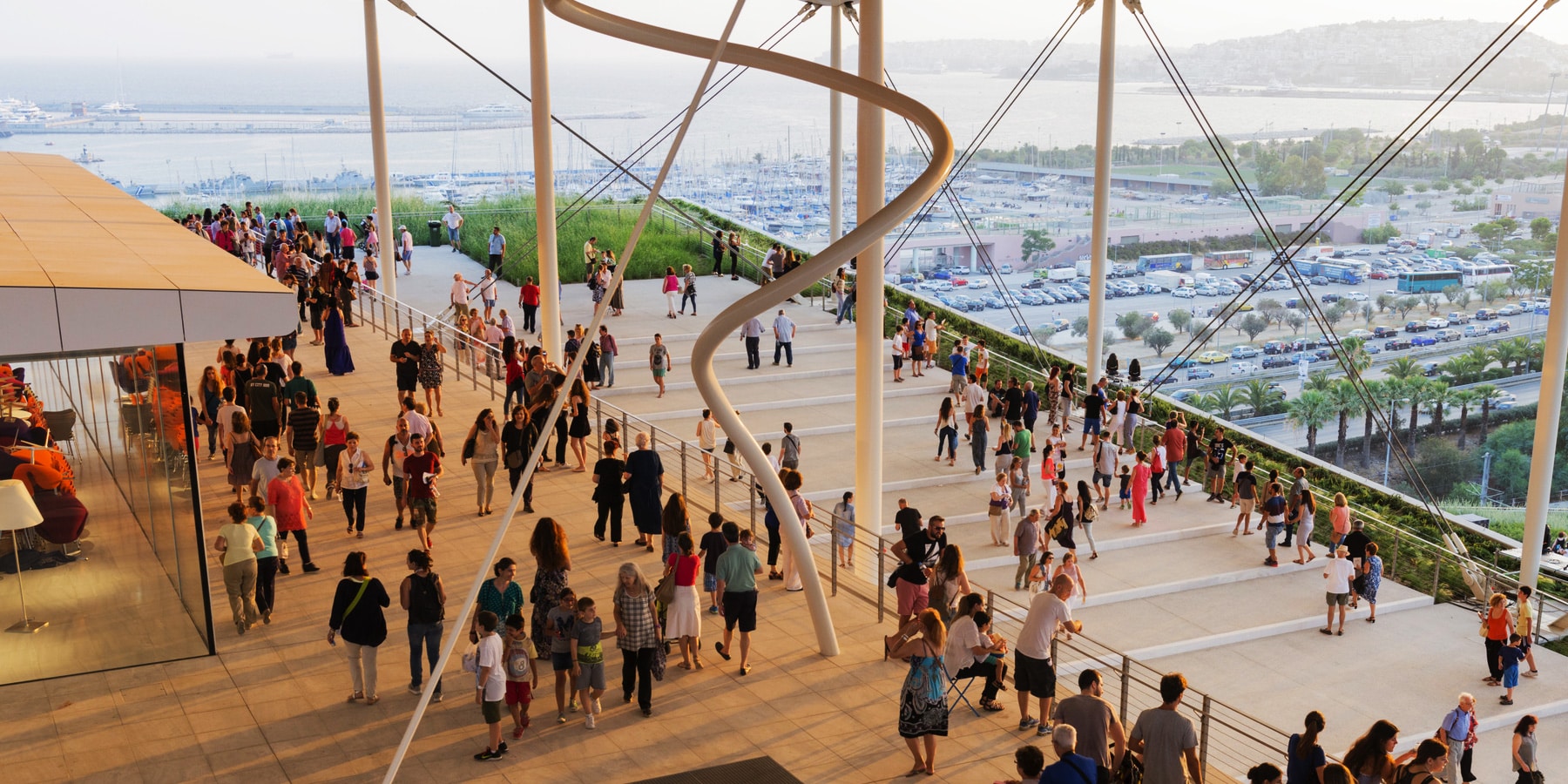 In her new book, the author examines the implications of massive building projects at cultural institutions. 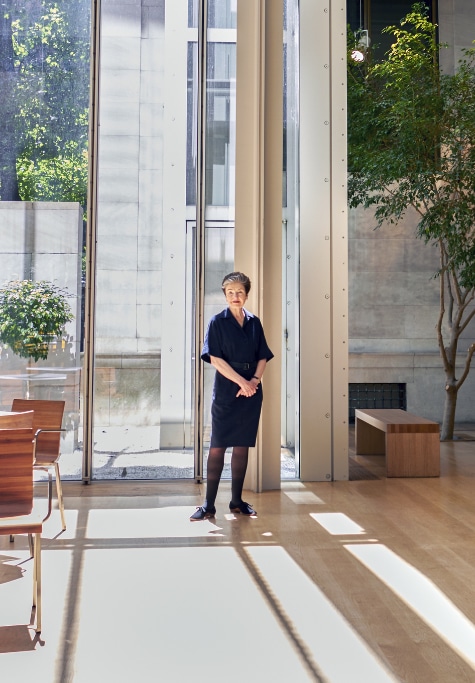 Victoria Newhouse, seen here in the Gilbert Court of New York’s Renzo Piano–designed Morgan Library, has just published a book that looks at the process of constructing Piano’s Stavros Niarchos Foundation Cultural Center (SNFCC), in Athens, from which, she says, boards and architecture committees for cultural institutions can draw a lesson (portrait by Rebecca Pollak). Top: The SNFCC’s park includes the Lighthouse, a glass-walled observatory that offers expansive views of Athens (photo © Yiorgis Yerolymbos, courtesy of the Stavros Niarchos Foundation).

Some authors of books on architecture are themselves designers of buildings; others are more academic types, theorizing from ivory towers. In a third category is Victoria Newhouse, whose new book, Chaos and Culture: Renzo Piano Building Workshop and the Stavros Niarchos Foundation Cultural Center in Athens (Monacelli Press), has just been published.

Newhouse, long married to publishing magnate S.I. Newhouse, is a world-class art collector and museum patron. She served three years on the jury for the Pritzker Prize, architecture’s highest honor. She travels at the highest levels of culture and counts the “starchitects” that we all read about as friends and colleagues.

Having been inside the cultural establishment and seen first-hand how it operates, she has a unique perspective on cultural building projects.

Seated in her ultramodern East Side apartment surrounded by canvases by Jasper Johns, Francis Bacon, Jackson Pollock and Willem de Kooning, among others, Newhouse is animated as she chats about the new tome, her fifth. “The book got started, really, for a very specific reason,” she says. “I had finished my previous book, Sight and Sound, which was about new concert halls and opera houses from the past twenty years, and I realized after my research how incredibly complicated it is to build this kind of cultural venue.” 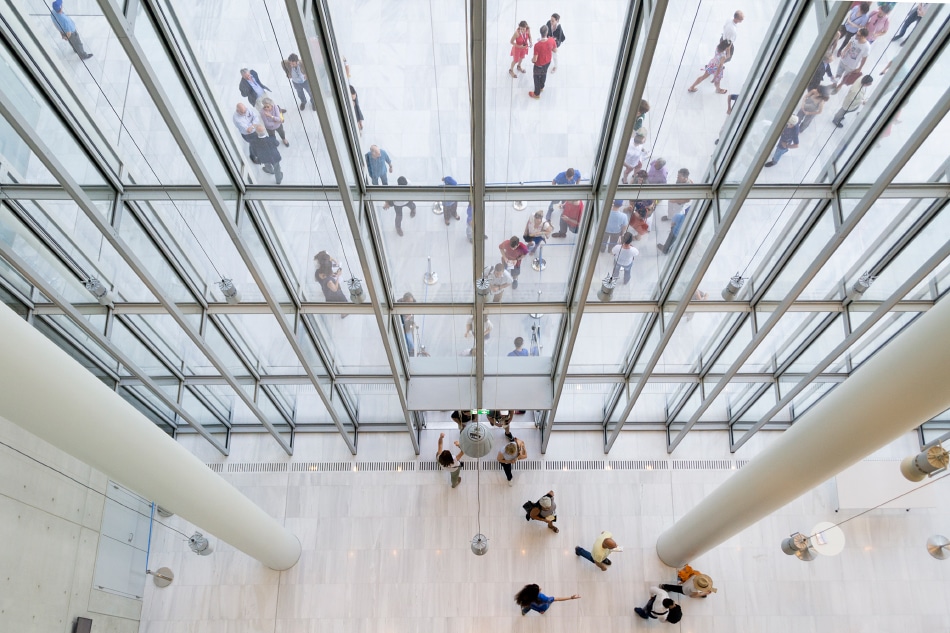 “Everything starts at the agora,” Piano says in Chaos and Culture, referring to the SNFCC’s ground-level entry area. “It is the focus of the cultural center, the place where fear disappears and people can share. It unifies everything.” The space has almost 80-foot-high glass walls and floors paved with marble from the nearby Dionysos quarry. Photo © Yiorgis Yerolymbos, courtesy of the Stavros Niarchos Foundation 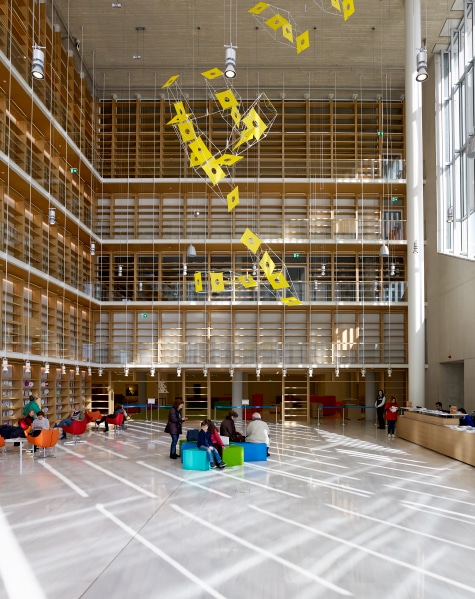 In designing the National Library of Greece, which is housed in the SNFCC, Piano created a 65½-foot-tall “book castle” in the lobby so that there would be no confusion as to the purpose of the building. Photo © Yiorgis Yerolymbos, courtesy of the Stavros Niarchos Foundation

Chaos and Culture is a very jam-packed with insights, looking not only at Piano’s architecture but the history of Greece — from the concept of the agora, or open civic space, to the country’s economic downturn and its penchant for tax avoidance — and the seeds of the Niarchos fortune.

Newhouse’s interest in the construction of cultural institutions has its roots in her experience on museum committees: She helped pick David Chipperfield for the Metropolitan Museum of Art’s now-delayed contemporary-wing addition and Daniel Libeskind for the Denver Art Museum’s controversial angular building, which opened in 2006.

In general, Newhouse believes museum patrons are “unaware of what they are getting themselves into” with massive building projects. “And so,” she continues, “the profoundly basic purpose of this book is to inform people. I think that every board and every architecture committee for a cultural institution should read this book.”

Her section on lessons learned should be bookmarked by all trustees. “I think the most important lesson, actually, is to make sure that you have enough money to run the place once it’s done,” she says, citing her experiences around the world. What will happen once the Greek government takes over the SNFCC is still to be determined.

She got to know Piano well during her many trips to Athens and has praise for, along with detailed analysis of, his firm’s design. In particular, his sense of siting made the project sing. The center has sweeping views of the sea, but only because Piano built the 100-foot-high hill on which his building sits. “And I think that’s what makes this,” Newhouse says. 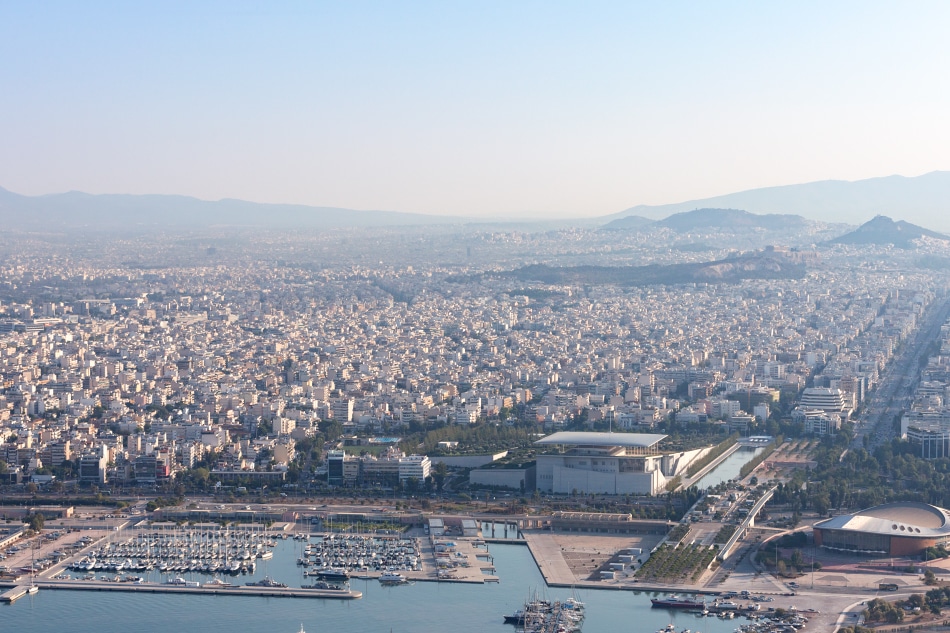 “It was an almost childish idea: I simply lifted the ground’s surface to make way for the architecture,” Piano says of his proposal to create a 100-foot hill and site the SNFCC there. Photo © Yiorgis Yerolymbos, Courtesy Stavros Niarchos Foundation

She marvels, in addition, at how the well-traveled Piano knew what was required: “Years before he ever dreamt of doing this building, his cab was stopped for speeding at that site, and he realized that though he was only a few feet from the water, he couldn’t see it.”

Newhouse took an unusual route in arriving at her interest in architecture. She had it, one might say, thrust upon her. A Bryn Mawr graduate, she is fluent in French, which came in handy in one of her first jobs, in the mid-1960s, working for famed publisher George Braziller. “One day,” Newhouse recalls. “George walked into my office with an armful of manuscripts, threw them on my desk, and he said, ‘I’ve just fired Janet Parr,’ who had been his architecture editor. He said, ‘You’re gonna take over!’ I said, ‘George, I know nothing about architecture!’” 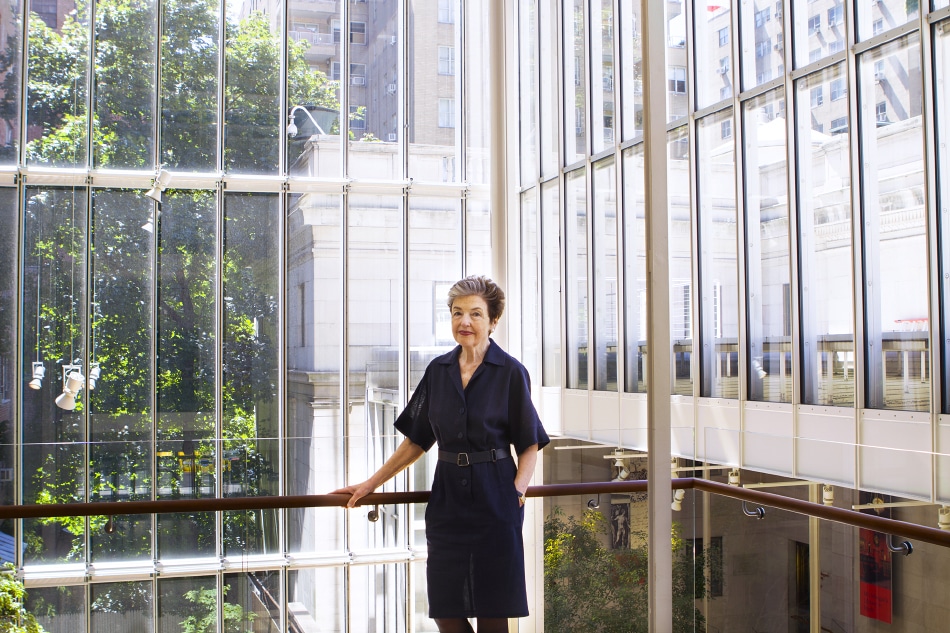 On the Morgan’s second floor mezzanine balcony, Newhouse got the idea for Chaos and Culture from her previous book, Sight and Sound, which was about concert halls and opera houses constructed during the past 20 years. Her research made her realize how difficult it is to build this type of cultural institution. Portrait by Rebecca Pollak

“I think the most important lesson, actually, is to make sure that you have enough money to run the place once it’s done.” 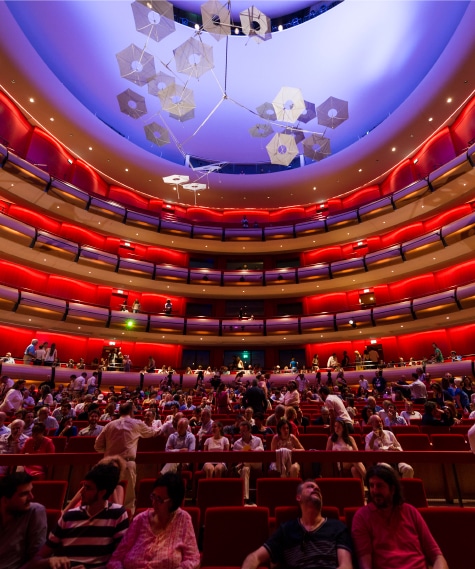 Consultants were hired for the SNFCC Opera House project to ensure that it made the grade theatrically and acoustically. This didn’t faze Piano. “Architects live on limitations,” Piano tells Newhouse in Chaos and Culture. “Restrictions are part of the game: You don’t need to have complete freedom to create.” Photo © Yiorgis Yerolymbos, courtesy of the Stavros Niarchos Foundation

She quickly fixed that. “I went back to school,” Newhouse says. “I enrolled in a program for a master’s degree at Columbia in architectural history. Two of the best years of my life. I just loved it, I made so many friends.”

She married S.I. Newhouse in 1973. Her first book was on Wallace Harrison, the now-little-known architect who put a major stamp on New York with his work on Rockefeller Center, Lincoln Center and the United Nations.

Newhouse hit it off with Harrison personally. “I came home,” she recalls, “and I said to Si, ‘I met this extraordinary man. I want to write a book about him.’ And Si said, ‘You’d better think very carefully about that. That is a very ambitious undertaking.’ Of course, my brilliant husband was absolutely right.” She notes that he always reads her manuscripts and comments, too.

Also fateful was her acquaintanceship with Edgar Kaufmann Jr., the noted architectural historian and department-store-fortune heir whose father commissioned Frank Lloyd Wright to build Fallingwater and Richard Neutra to build a house in the Palm Springs desert. Kaufmann contributed funds, mingled with Newhouse’s own, to create the Architectural History Foundation. Although it’s not producing new titles, the foundation still exists, and the backlist revenue now supports what Newhouse calls “small grants to people who are writing, mostly to support either editing or photography.”

Newhouse’s 1998 book, Towards a New Museum, she says, “caught a moment”: the beginning of the museum-building craze. “The Guggenheim Bilbao and the Getty Center both opened the same year, and they were kind of bookmarks for sculptural architecture.” 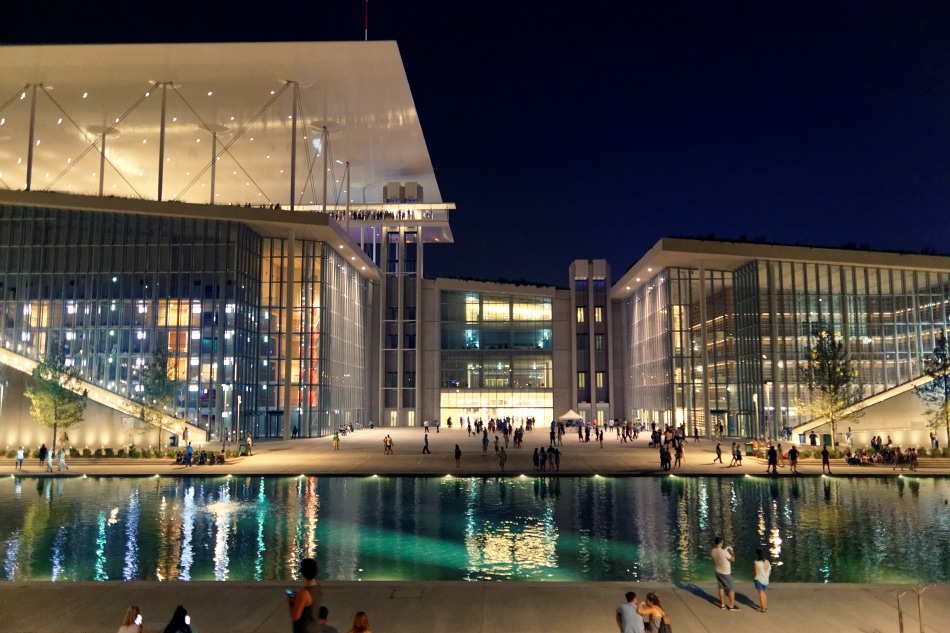 The soaring glass walls of the agora offer views inside both the opera house and the library. To make the SNFCC visible at night, lighting consultants designed a system that bathes the buildings in blue lights to honor the foundation. Photo by Bill Barekas 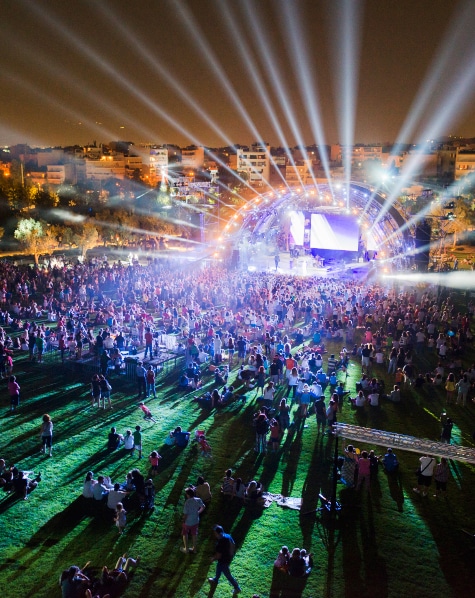 The 42-acre park at the SNFCC includes the grounds (and even rooftops) that started as hand-drawn sketches by Piano and were then developed by New York landscape designers Deborah Nevins & Associates. It includes a performance venue, a splash pool and nine playgrounds. Photo © Yiorgis Yerolymbos, courtesy of the Stavros Niarchos Foundation

Her recent service on the Pritzker board entailed flying around on the Pritzker jet (“very luxurious,” she says) to assess buildings all over the world. During her tenure, the jury awarded the prize to Paulo Mendes de Rocha (2006), Richard Rogers (2007) and Jean Nouvel (2008). The award to Brazil’s Mendes de Rocha, known for expressive concrete buildings aimed at a broad audience, struck her as particularly significant. “They had been giving it to these really ‘starchitect’ kind of people,” she says. “So several of the members of the jury made a very strong argument that we should award it to somebody doing work that was inexpensive and appropriate to the social and economic conditions that he was working in.”

As Newhouse plunges into her next book project, which will examine landscape architecture, she is also finishing a house in one of Long Island’s vacation communities. She and her husband spotted the waterside parcel 25 years ago and waited for it to become available, tearing down an old, decrepit house and commissioning Arizona-based architect Rick Joy to build a modern, one-level home that’s “a very simple rectangle with an asymmetrical roof.”

Perhaps most significant is what she thought about but didn’t do for her weekend house: hire Frank Gehry, whom she knows well. They discussed the project years ago, but as Newhouse notes, “It never would’ve gotten past the board in this village.” 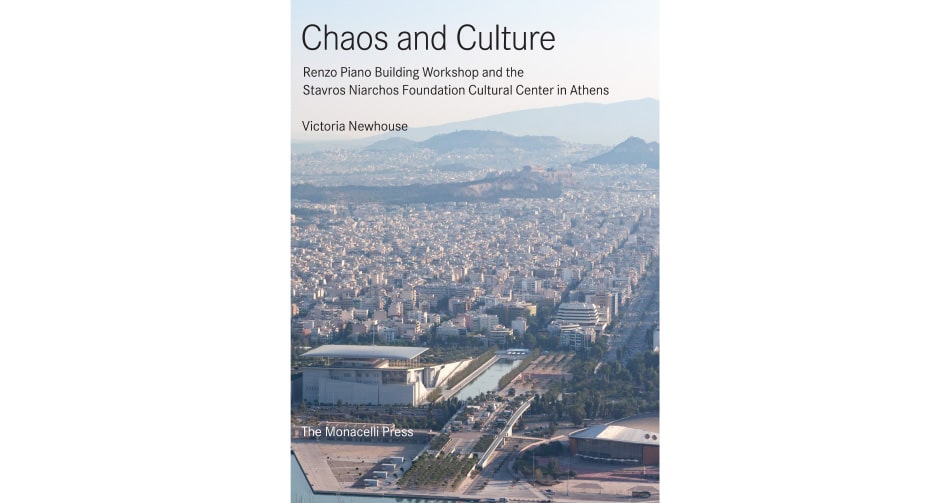