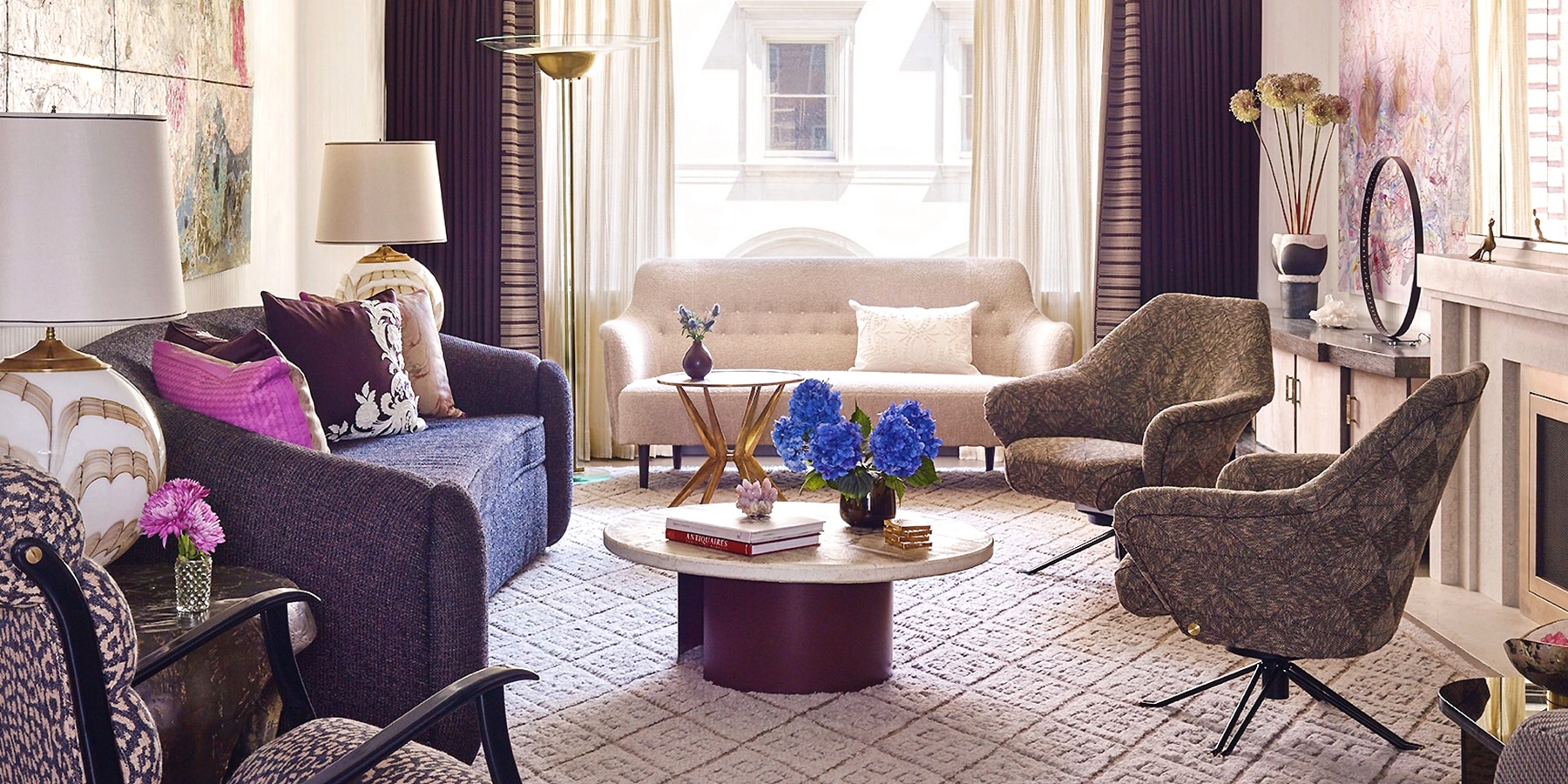 The designer attributes his career to a series of lucky breaks, but his interiors prove that talent and an eye for detail are the secrets to his success. 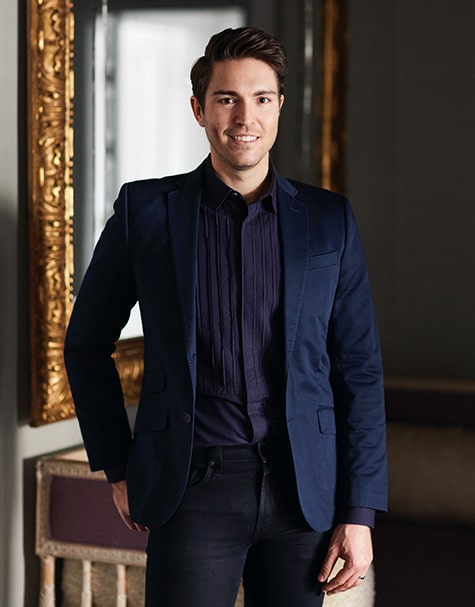 Wesley Moon worked at Skidmore, Owings & Merrill and several other firms before an acquaintance asked him to design her townhouse, which prompted him to start his own firm (portrait by Thomas Loof). Top: Moon designed the Jean Royère–inspired sofa at the left of this Upper East Side living room. A pair of Osvaldo Borsani swivel chairs from the 1950s face the Paul Kingma stone-top coffee table from Walter Design (photo by Peter Murdock).

In 1987, when Georgia-born and -bred Wesley Moon was 10 years old, he and his mother were in a car accident. The injuries that his mother, Jan Yancey, sustained ended her career as a clog-dancing teacher, as well as a performer on the television show Hee Haw, at the Grand Ole Opry and other venues. And, although Moon already showed an affinity for design — “My first toys were Legos, and my first houses were for Smurfs,” he jokes — the event irrevocably set the course of his own career.

After the accident, his mother learned faux finishing, eventually parlaying the skill into an interior decorating business known for bold statements and big flower arrangements. (His father, Ted Moon, has long owned a sheet metal company.) “I loved working with her and playing with the fabric swatches and paint finishes,” recalls Moon. “I learned from her to be pretty fearless and commit to my decisions.” Moon enrolled in the architecture program at Georgia Tech for two years, then transferred to American InterContinental University Atlanta, where he earned a bachelor of fine arts in interior design in 2000.

A set of architectural renderings Moon executed as a sophomore in high school that hang behind his desk at his small office on Chrystie Street, in Lower Manhattan, is evidence of how thoroughly he absorbed his mother’s fearlessness. They depict an imagined 60,000-square-foot manse that mixes architectural styles and are peppered with notes like “Marble columns are nine feet tall with gold angels on top.” 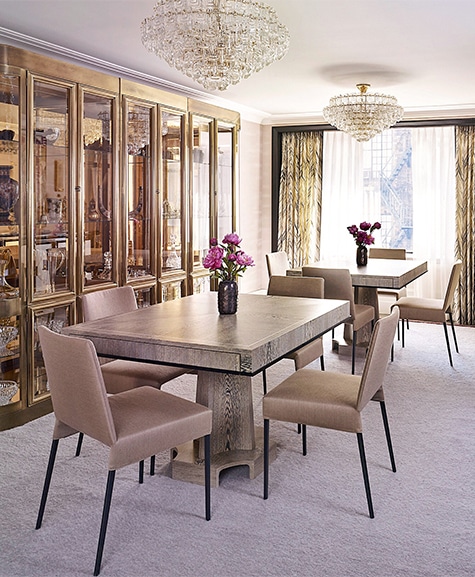 “The clients wanted a dining room that can accommodate large dinner parties but is also intimate enough for the two of them to have dinner alone,” Moon says of this Upper East Side space. He designed a pair of tables that they can join to create one large piece seating up to 16 people. The 1980s Mastercraft cabinet is from Talisman. Photo by Peter Murdock

To earn money while at school, Moon ran his own faux-finishing business in his sophomore and junior years and, as a senior, worked for Atlanta-based designer Teri Duffy. That year, on a study project in New York, Moon toured the offices of Skidmore, Owings & Merrill, where one of the heads of the interiors department invited him to come work at the storied firm after graduation. “Teri was very supportive and encouraged me to follow my dream of moving to New York,” he recalls. “It sounded really swanky to work in the world’s largest architectural firm. But the reality of being one auto-CAD operator of fifty-two and one employee of four hundred wasn’t glamorous.”

Still, Moon excelled. He designed a café for Goldman Sachs that he was set to present to company executives on September 11, 2001. But in the wake of that day’s terrorist attacks, Goldman Sachs and SOM, like many companies, scaled back. Moon left SOM and put in time at, among other firms, Sean Johnson, Thom Filicia and Martha Stewart, where he worked on a series of branded residential developments around the country. After a friend of a friend saw one of Moon’s freelance projects, she asked him to design her New York townhouse, and he felt confident enough to strike out on his own in 2008.

Since then, his work has been featured in, among others, Architectural Digest, Elle Décor, House Beautiful and New York. (See Moon’s before-and-after transformations on The Study.) Currently, he is juggling 13 projects, more than half of which he deems “major,” including a Greenwich Village triplex and sprawling houses in Rye, New York; and Greenwich, Connecticut. 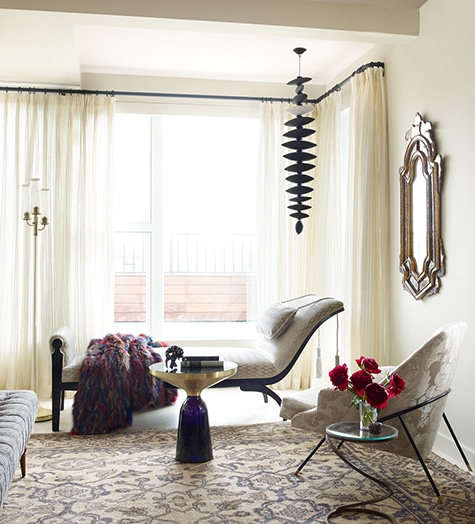 A mobile sculpture by Helena Starcevic hangs over a ca. 1815 ebonized Biedermeier chaise longue from Ritter Antik in this penthouse on Manhattan’s Upper West Side. An Italian modernist club chair by Augusto Bozzi from Van den Akker is paired with a vintage coiled-spring gilt-iron table from Dual. The Barovio e Toso floor lamp is from Century Design, Ltd. Photo by William Waldron

I’ve had so many lucky breaks, chance meetings, mother’s prayers and happy coincidences along the way that have culminated in my current career. But the genesis and ultimate big break for me was getting the job at Skidmore, Owings & Merrill right out of college. That allowed me to move to New York City, and I made my best friends there, who I am still the closest to sixteen years later. It’s through one of those friends that I met my first client when I went out on my own.

I mix periods but in a way that doesn’t look like it’s trying too hard. I care about making the house lived in, never too precious. I call it accessible elegance. I don’t like when there’s one piece in a room screaming at you. I like a room to hum, no solo performances. If something is dramatic, I find a way to neutralize it. Everything has to play nicely together. 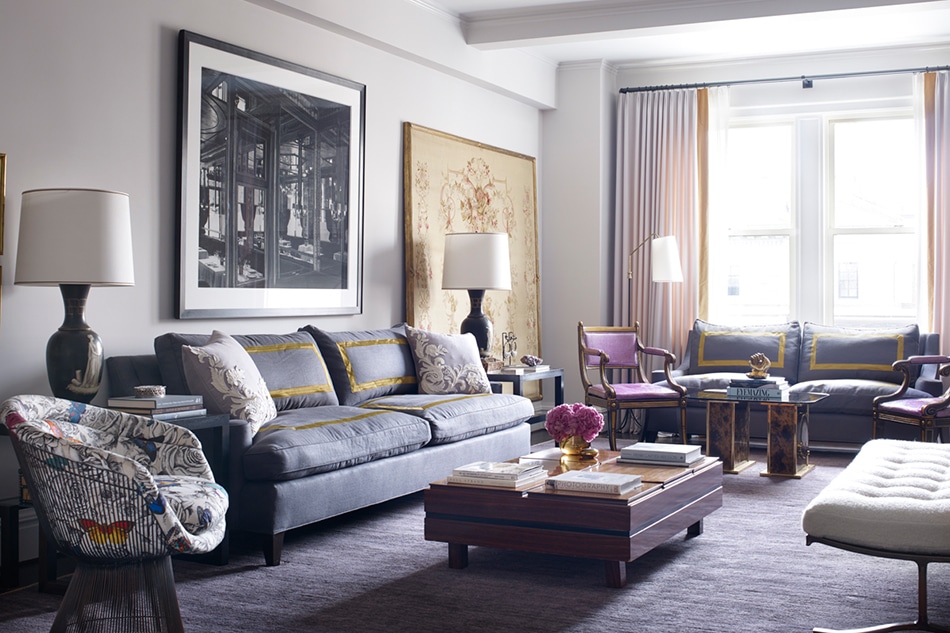 The living room of this Park Avenue apartment features sofas designed by Moon and produced by Anthony Lawrence Belfair. The 1960s French coffee table is from Van den Akker. and the Warren Platner chair from Modern Drama was reupholstered in a Christian Lacroix fabric. A Matthew Pillsbury photograph hangs on the wall next to a framed antique French Aubusson tapestry. Photo by William Waldron 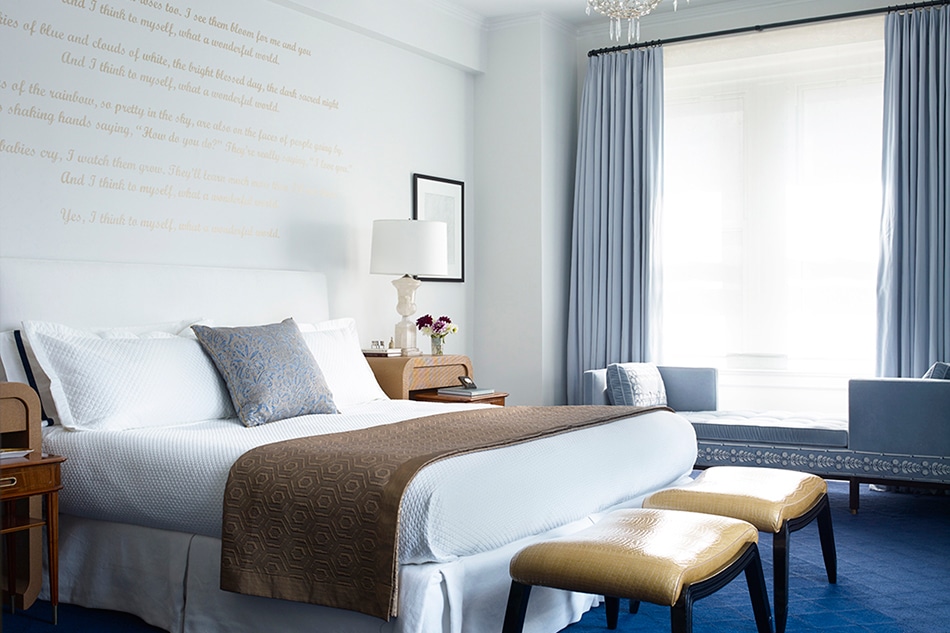 The lyrics to “What a Wonderful World” are written in gold leaf on the wall of the master bedroom. The custom bed is by Anthony Lawrence Belfair, and the throw is by Frette. The vintage Dunbar tête-à-tête is reupholstered in an embroidered silk velvet Holland & Sherry. The rock-crystal lamp is from Carlos de la Puente Antiques. Photo by William Waldron 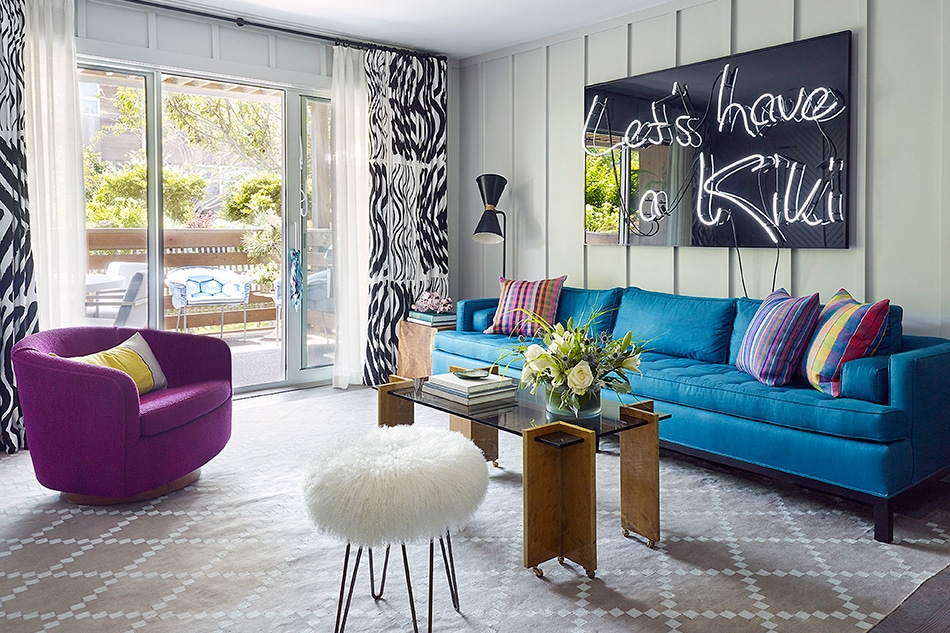 “Here, I took a plain white box and added architecture by simply applying strips of wood that give the illusion of board and batten,” Moons says of his Fire Island living room. The vintage Dunbar sofa is covered in a lacquered linen from Cowtan & Tout, and the chair is vintage Milo Baughman recovered in a pink wool bouclé from Knoll. The area rug is by Madeline Weinrib, and the drapery fabric is from Marimekko. Photo by Peter Murdock 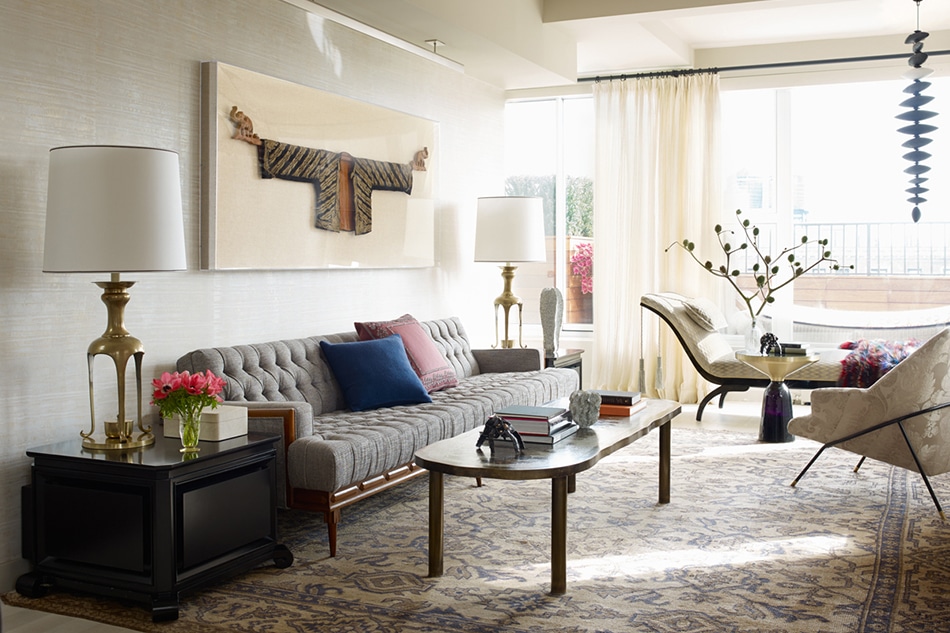 Hanging over the sofa in this Upper West Side penthouse is a vintage Turkish coat that Moon had mounted on a carved wooden bar from Thailand and framed in a Plexibox. He designed the black lacquered side tables to house the electronic equipment. The James Mont sofa is from Gustavo Olivieri, and the LaVerne Romanesque coffee table is from Adam Edelsberg. Photo by William Waldron 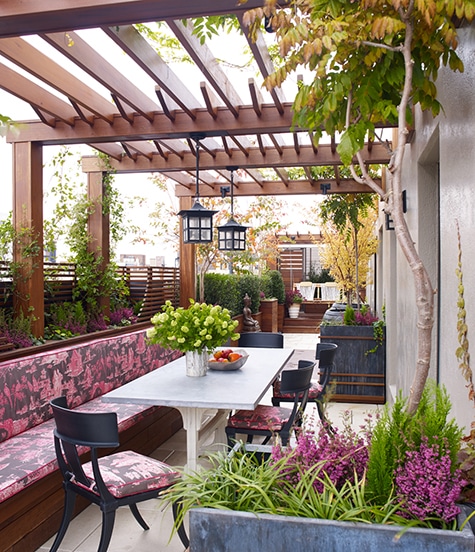 The terrace of the Upper West Side penthouse, designed with Aaron McIntire, of Gunn Landscape Architecture, features a built-in bench upholstered in a Sunbrella fabric with a Quadrille print. A zinc-top table  and klismos chairs complete the ensemble. Photo by William Waldron

I’m on a constant rotation between Stevie Nicks, Hed Kandi and Dolly Parton on Spotify.

Pierre Yovanovitch — none of my projects look like his, but he’s the first designer whose work I look to for inspiration. His vibe really speaks to me, and his details are impeccable. Details are everything to me. Also Jean Louis Deniot, because he’s so French. 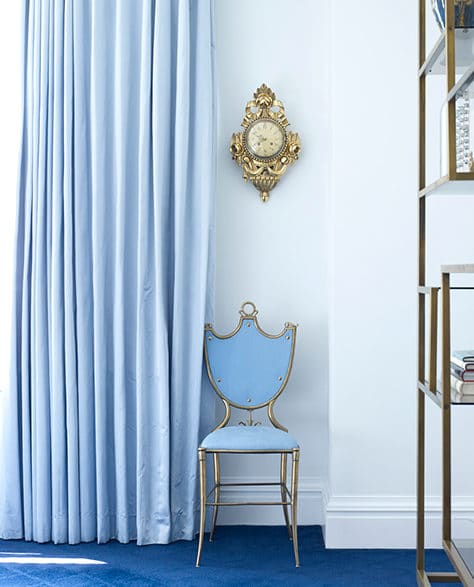 In the master bedroom of this Manhattan apartment, the homeowner’s antique clock hangs above a 1950s Italian side chair. The drapery fabric is from Holland & Sherry. Photo by William Waldron

Hotel bars in general. In New York, it’s The Baccarat, The Carlyle and The Mark.

Queen of the Night, by Alexander Chee. It’s about an opera singer in Paris with a dark secret past. Someone hands her a libretto that is the story of her life, so she has to try to figure out who knows her secret.

My own place in the Pines, on Fire Island, which I share with my husband, Salvatore Malleo. The only place I really shut down is on a beach. 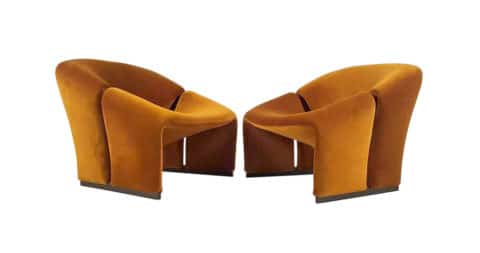 “These chairs are sculptural, comfortable and could blend beautifully in almost any interior.” 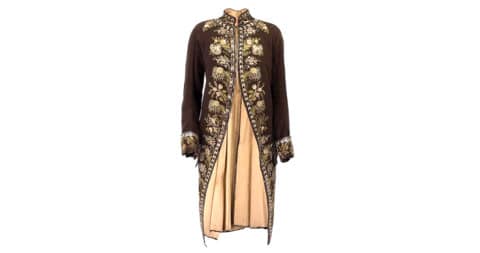 “As much as I would enjoy wearing this (and it appears to be my size), I picked this because I would love to make curtains with fabric inspired by this coat. That embroidery on a leading edge would be the living end!” 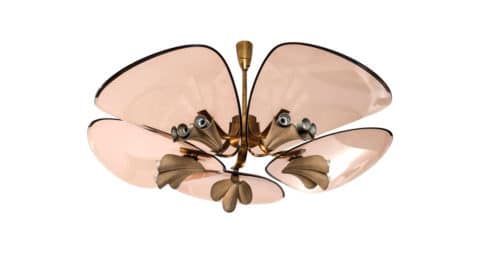 “The color of the glass and the graceful shape of this chandelier are beyond elegant.” 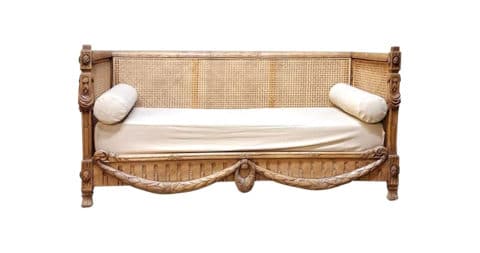 “Although the piece is intricately carved, the simple wood finish keeps it easy and down-to-earth. You can take this sofa in many different directions depending on the fabric you choose.” 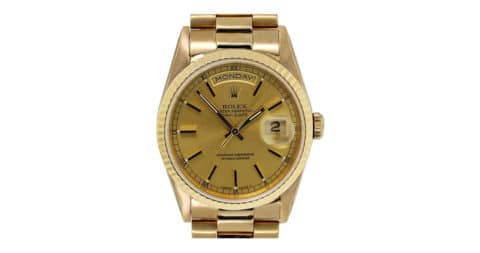 “I have a big birthday coming up this year, and this pick is totally a hint for my partner. Tone on tone, simple elegance — I love it!” 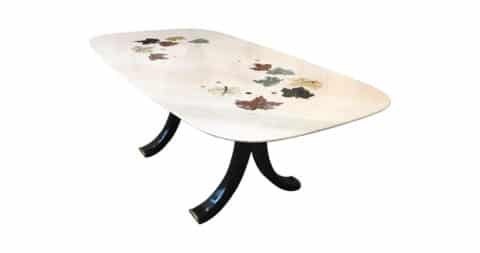 “I’m blown away by the marble marquetry!” 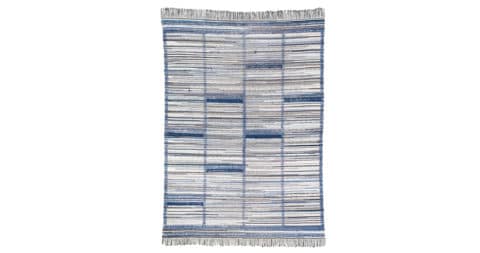 “I love the color and texture this would add to a room. It could be dressed up or down.” 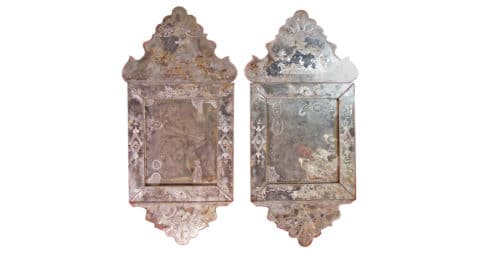 “Look at that patina! These would add elegance to any room, traditional or contemporary.” 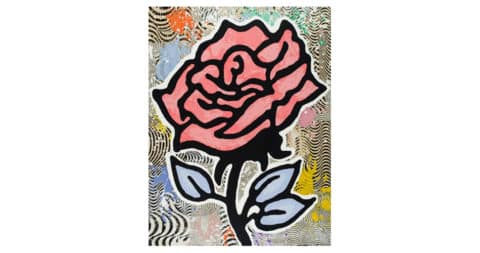 “Donald Baechler’s works just make me happy, even though they are much deeper than they first appear. I love how layered they are.”