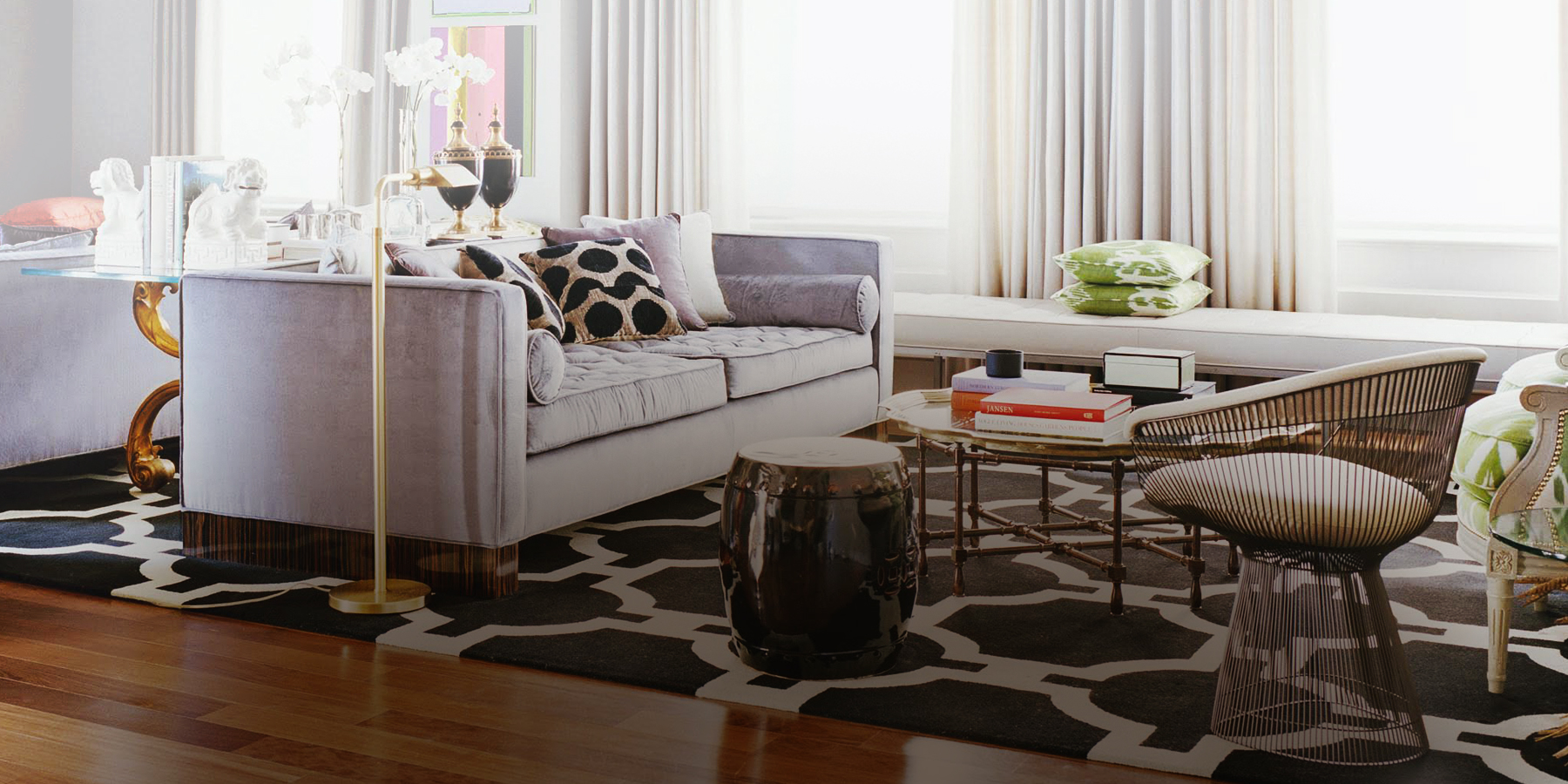 Inspired by filmdom’s Art Deco penthouses and disco-era glamour, this interior designer is known for making grand gestures in projects from Melbourne to Manhattan. 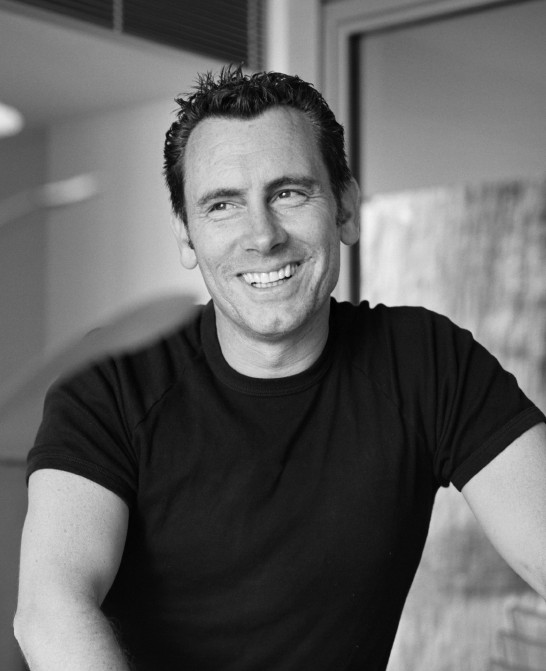 Australian interior designer Iain Halliday, director of BKH, is known for his dramatic residential creations (portrait by Earl Carter). Top: In the Manhattan apartment of Kiane and Charlie von Mueffling, Halliday outfitted the living room with a Warren Platner for Knoll chair, Beauvais carpet, vintage Moroccan-inspired Baker coffee table. The leather window seat and silk-velvet sofa were custom made (photo by Ditte Isager). All other photos by Sharrin Rees, unless noted

The sheer drama of Iain Halliday’s work could change the Australia of your imagination from a place of spectacular natural scenery to one of man-made sophistication, urbanity and glamour. The Sydney-based interior designer is well-known Down Under for breathtaking beach houses, theatrical apartment makeovers and big-budget destination restaurants. These days, he is a man of two hemispheres, jetting between BKH, the long-established Sydney firm of which he is director, and a satellite office in New York, the city that has been his muse since childhood.

Growing up in Sydney in the 1970s, Halliday was obsessed early on with the Manhattan penthouses and skyline views in the black-and-white movies of the Art Deco era and with the images of New York — “everything shiny and black” — that appeared in the issues of Architectural Digest he pored over as a teenager. Later, he became fascinated with what he calls the “high-minimal, three arum lilies in test tubes” aesthetic of New York–based designers like Joe D’Urso.

After studying interior design at Sydney’s College of Arts and architecture at the University of Technology, Halliday joined the interior design firm that Neil Burley and David Katon launched in the 1970s. (The firm’s name officially became BKH, for Burley, Katon and Halliday, in 1989.) Those early days were “a fun time,” Halliday says. “They sold inflatable furniture and made things out of blocks of acrylic” in the madcap spirit of the day. 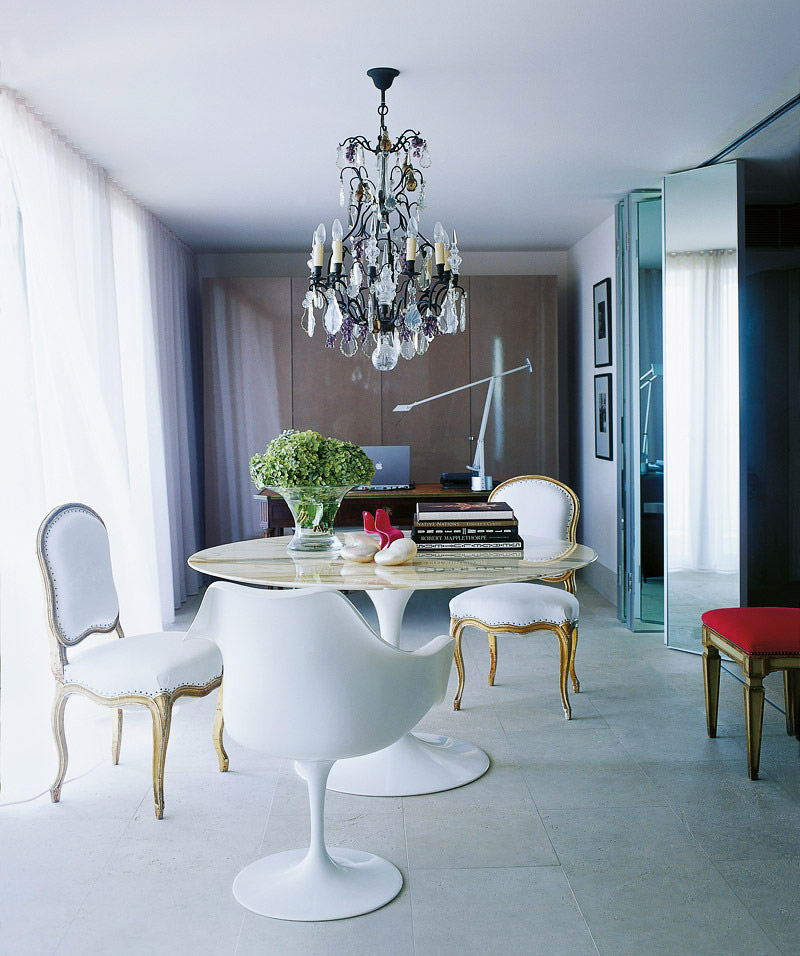 The first-floor bedroom suite of Halliday’s own Palm Beach house, north of Sydney, has a Baccarat chandelier above an Eero Saarinen Tulip table and chair, along with gilded Louis XV–style side chairs. In the background are a custom-built cabinet in metallic lacquer and a Louis XVI desk.

When Halliday came on the scene in the mid-1980s, the seeds of the company’s adventurous aesthetic were still being sown. “What we did was create a kind of vocabulary,” he recalls. “Even when we got crappy little jobs, we made the best of them by relying on one succinct gesture” to create drama. A Chinese restaurant they designed was all black except for a wall stenciled with a template based on willow-pattern china. “The whole budget went into that wall,” Halliday says. “Rather than sprinkle money here and there, we’d deliver one exciting thing.” It was an early lesson he retained as his work became more diverse and his clients more moneyed.

In Australia, Halliday’s bread and butter has been what he calls “Hamptons-style” structures, “that whitewashed dream” of a beach house sitting on the continent’s dramatic shoreline. But the projects he’s most proud of are the displays of architectural daring, like the house in the countryside with a facade made of ground earth mixed with concrete and poured into a plywood form to create a sinuous wall — “a bit like a Richard Serra sculpture,” he says.

Then there’s the four-level “look-at-me” house facing Sydney’s famous Bondi Beach, a U-shaped structure of tilted concrete slabs and glass wall panels. “It’s in a very public location, and the client’s desire was to create this highly visible statement,” Halliday says. Within this industrial shell, the interiors are pure luxe, with a white marble foyer, a spiral staircase and sweeping sofas covered in coppery metallic leather. 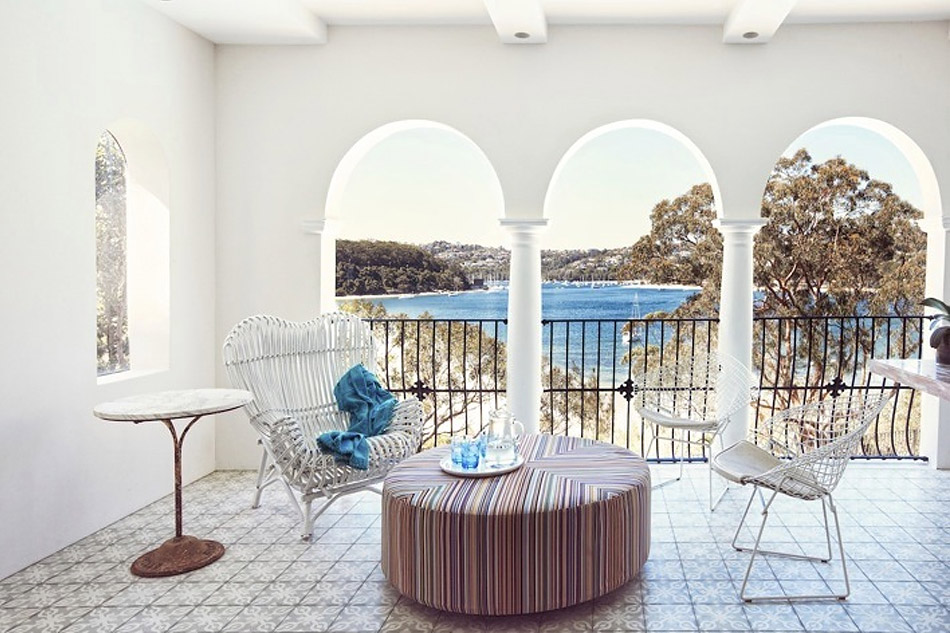 The terrace of Balmoral House, on Sydney’s lower north coast, is decked out with a vintage French bistro table, a custom ottoman in French canvas, a Franco Albini for Bonacina rattan Gala chair and Harry Bertoia Diamond chairs. Photo by Jason Ierace 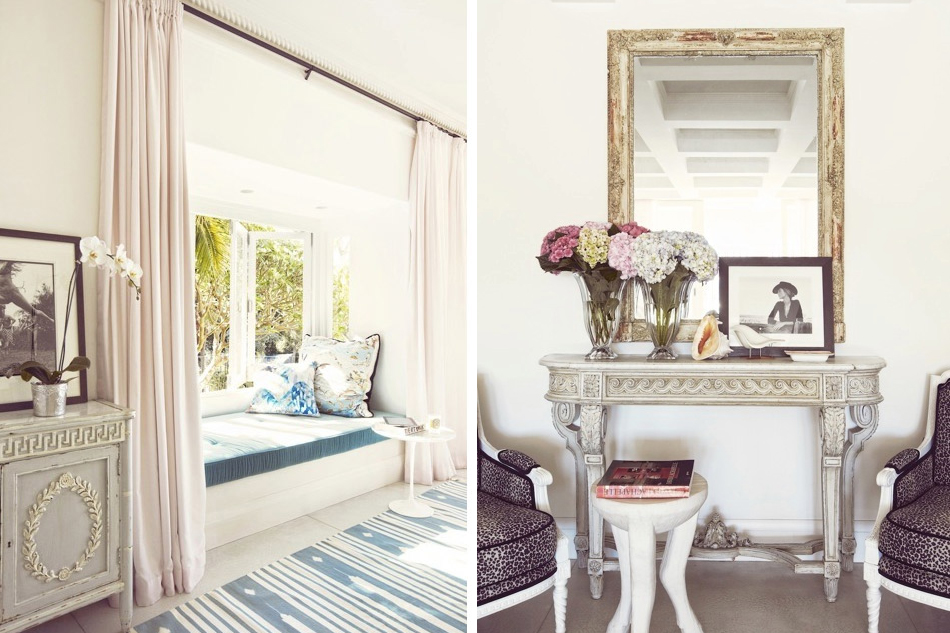 Left: Inside the Balmoral House are a French Louis XVI–style antique cabinet and a custom-made velvet window seat. Right: In what Halliday calls “the rumpus room,” Louis XVI–style armchairs in Schumacher Leopard fabric flank an Ari side table by Oly Studio. Photos by Jason Ierace 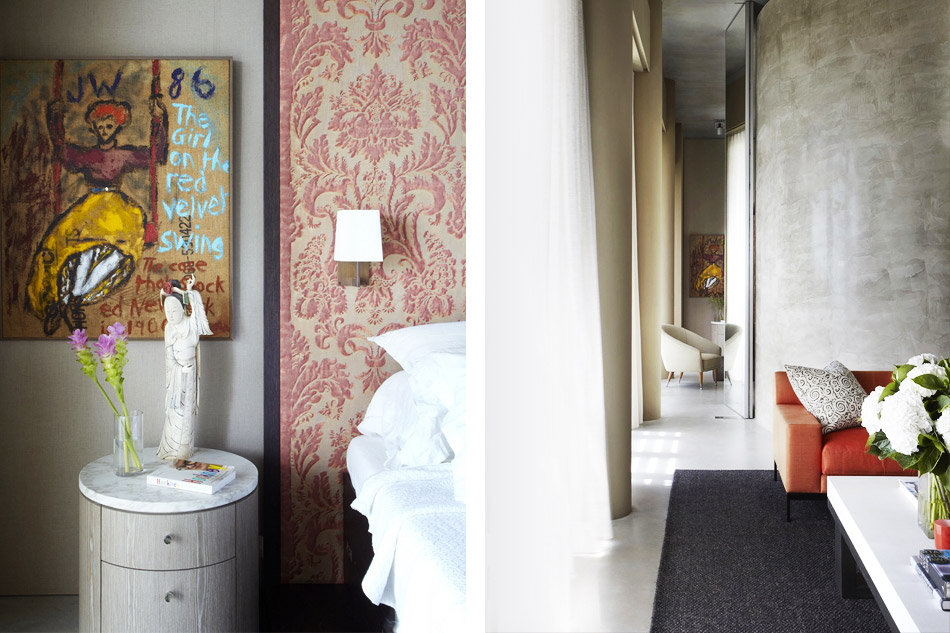 Left: For the master bedroom of a house on Sydney’s Whale Beach, BKH custom-made the drum bedside table that sits beneath an artwork by Jenny Watson. Right: Outside the bedroom, the straight lines of a Christian Liaigre chair and table contrast with the curved Venetian plaster wall. 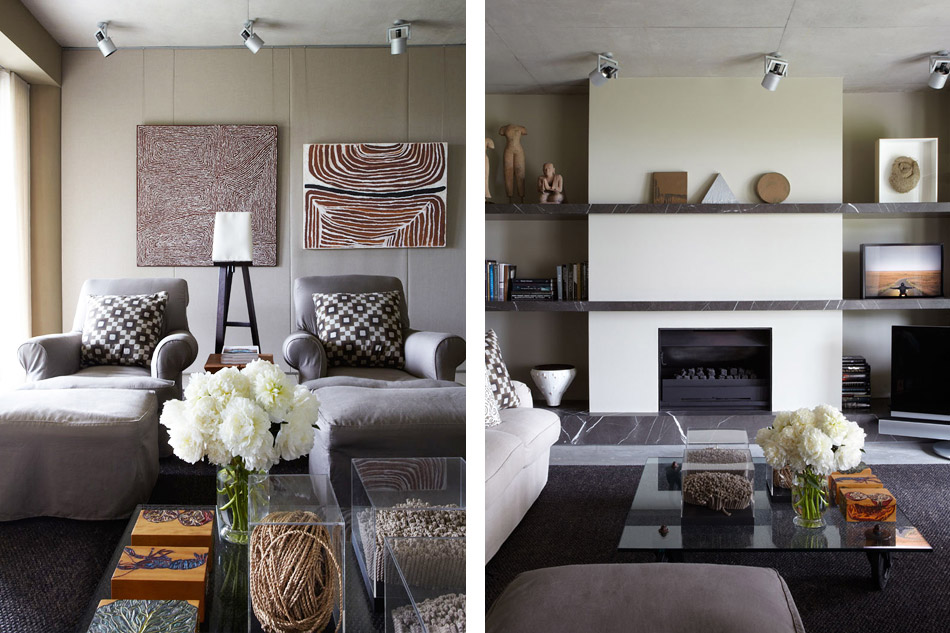 Left: The Whale Beach rumpus room features Bronte House chairs, a Christian Liaigre lamp and a Tavolo con Ruote coffee table designed by Gae Aulenti for Fontana Arte. The homeowners’ collection of Aboriginal art includes a painting by George Hairbrush Tjungurrayi (at left). Right: On the opposite end of the room are Khmer sculptures (top left) and a photograph by Isaac Julien (at right). 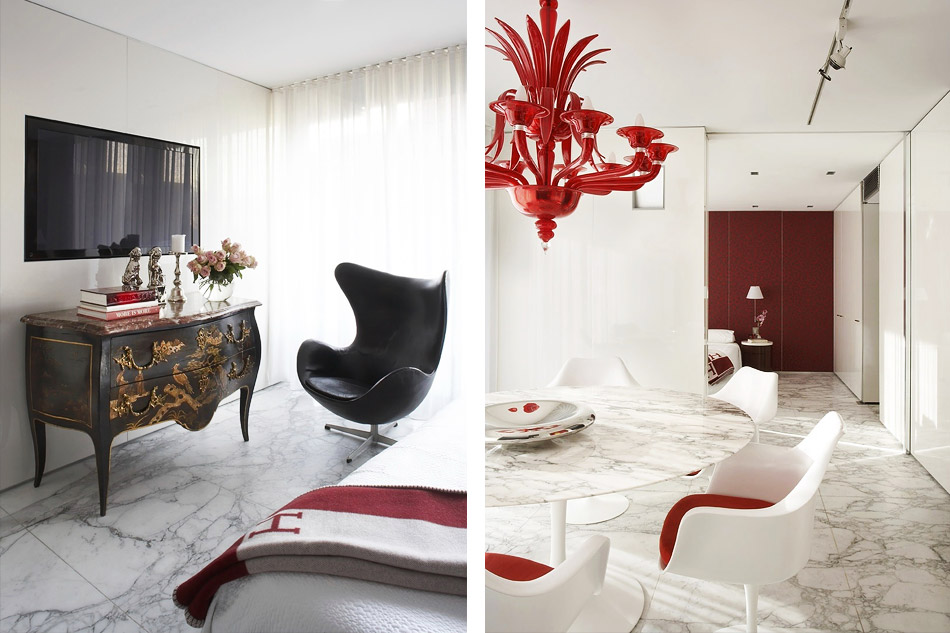 Left: Adorning the bedroom of an apartment in Potts Point, Sydney, are a Louis XV–style commode, Arne Jacobsen Egg chair and Hermès blanket. Right: In the dining area, a red Barovier e Toso chandelier hangs above an Eero Saarinen Tulip table and chairs.

Typical of Halliday’s attention to detail and creative use of materials is a house made for collectors of Aboriginal art, located 25 miles north of Sydney, with 14-foot ceilings and curved Venetian plaster walls. Its all-black dressing room has rubber shelving edged in stainless steel, and the bedrooms have headboards and cushions upholstered in Fortuny fabric.

Many BKH projects play with the tension between minimalism and decoration, which Halliday appreciates in equal measure and combines to impactful effect. “You can have a great white expanse of wall, floor and ceiling,” he says, “along with something Victorian and highly ornamental,” like the Murano or Baccarat chandeliers he often deploys in such settings.

“People may not be design literate, but they respond anyway. Successful design always registers.” 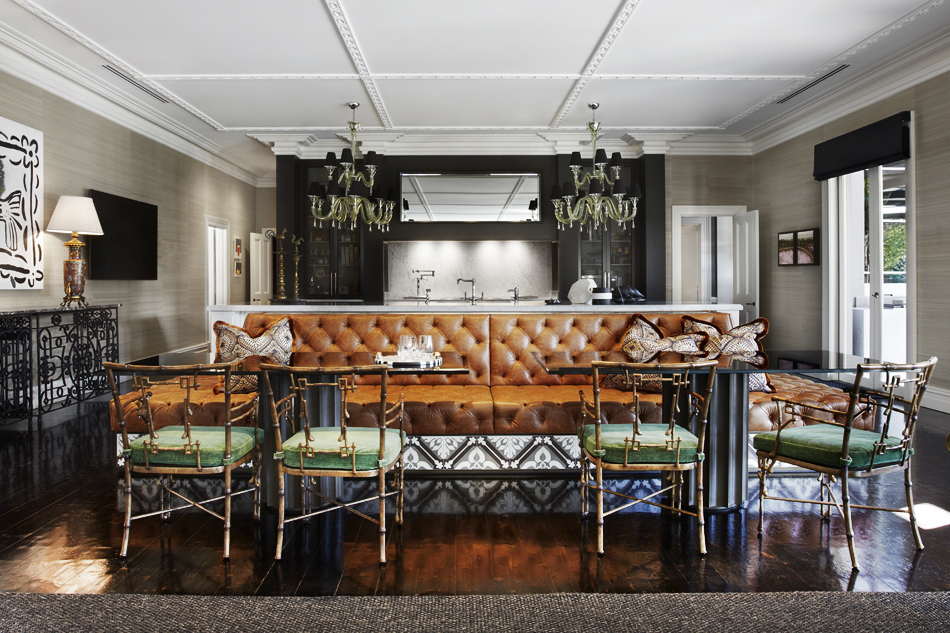 A custom-made leather banquette and Barovier e Toso Murano-glass chandeliers bring comfortable sophistication to the family living area and kitchen of a house in Melbourne. 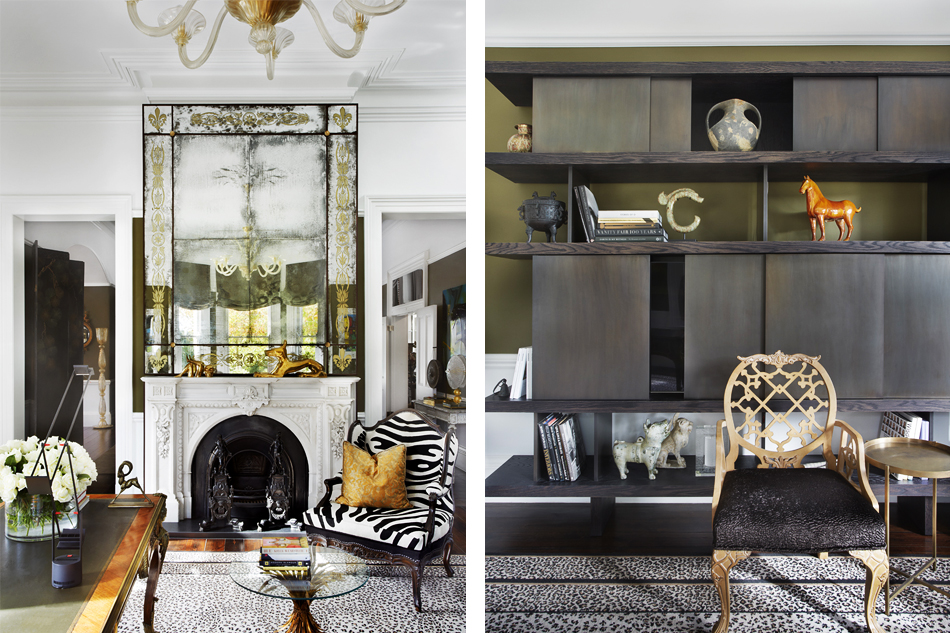 Left: The library of the Melbourne house projects a subtle safari vibe, with a Stark leopard-print rug, zebra-print chair and wheat-sheaf coffee table from 1stdibs. Right: Also in the library are BKH-designed shelving and a chair by Oscar de la Renta for Baker. 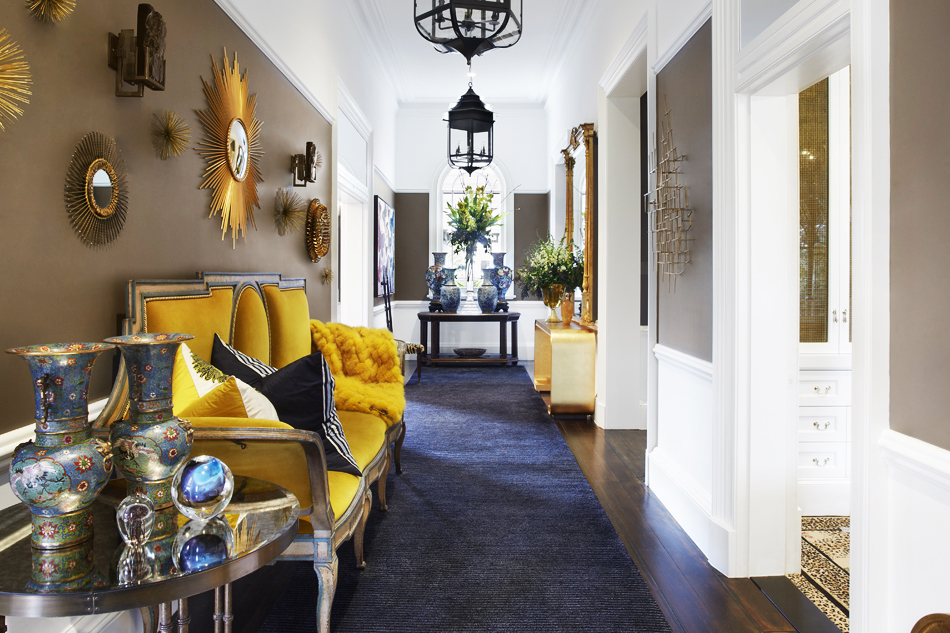 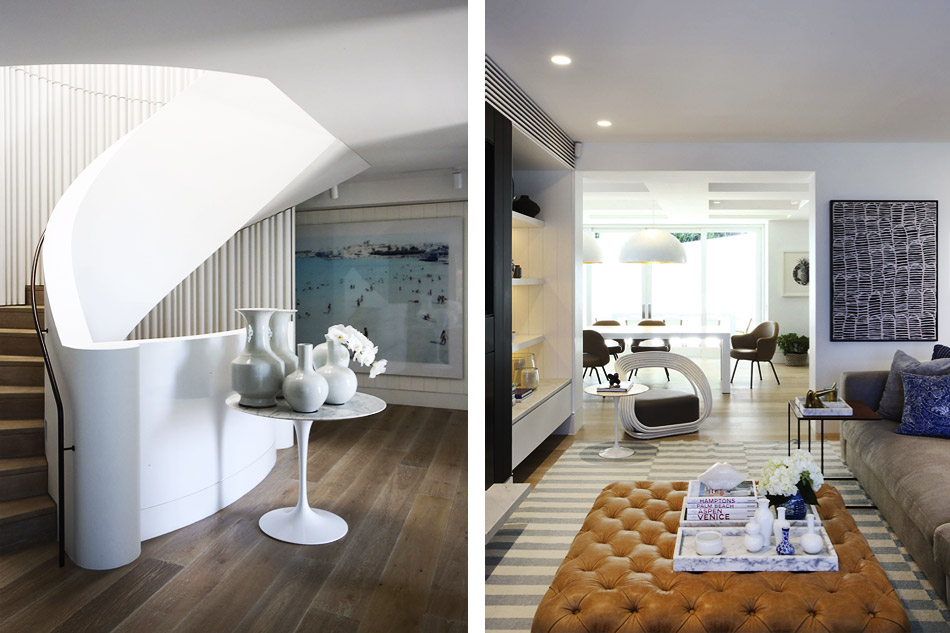 Right: A house in Mosman, on the lower north shore of Sydney, features a sweeping entryway staircase with a Saarinen table, blanc de chine vessels and a beach-themed Massimo Vitali photo on the back wall. Right: In the living room are a custom tufted ottoman, Poliform Dune sofa, Vittorio Bonacina Eva side chair, Minotti Leger side table, Saarinen Tulip side table and Aboriginal art by Minnie Pwerle. 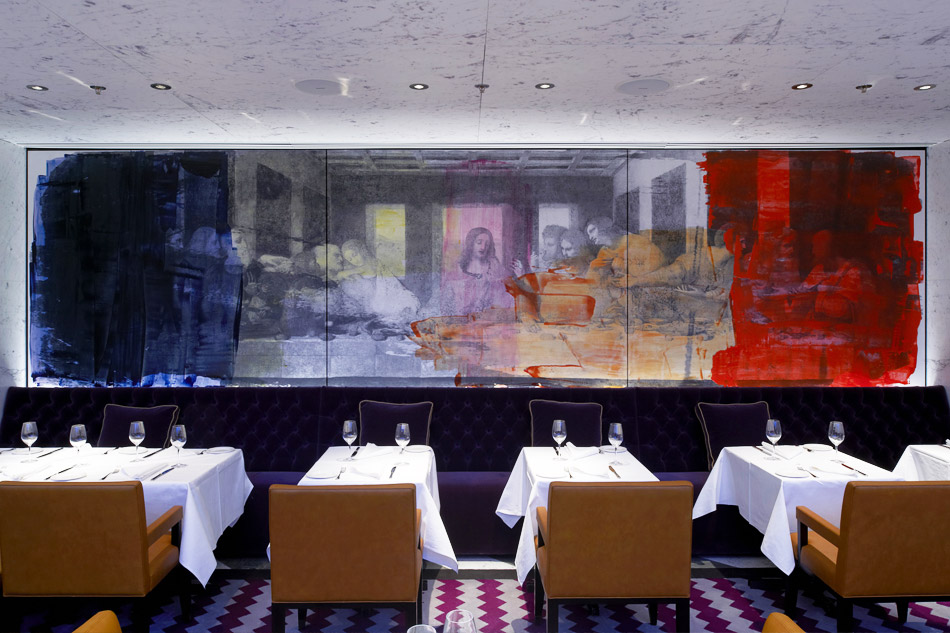 In his design for Melbourne’s Rosetta restaurant, Halliday included references to Italian culture, such as this digitally produced mural based on Andy Warhol‘s Last Supper.

The 18-person BKH office is nothing if not versatile. A Melbourne client recently bought a turn-of-the-20th-century villa that “had been made over by a flipper and was beige everywhere,” Halliday says. The client had a vision of zebra chairs and an ocelot carpet, and Halliday turned to 1stdibs for suitably dazzling accessories. He added etched mirrors from Bernd Goeckler, a sputnik chandelier from John Salibello, an Edgar Brandt fire screen from the Warehouse and a brass mid-century coffee table from Amy Zook. “We buy from 1stdibs all the time,” Halliday says. “Australia has a very big DIY culture, and our clients all know about it.” 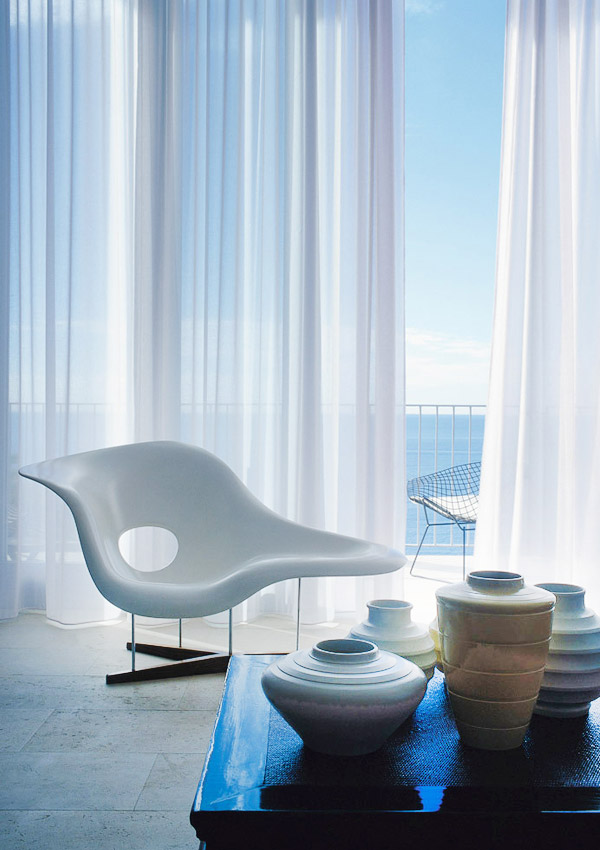 The sitting room of Halliday’s Palm Beach home features an Eames La Chaise by Vitra, an antique Chinese opium bed and ceramics by Keith Murray for Wedgwood. On the terrace behind is a Bertoia Diamond chair.

For clients Kiane and Charlie von Mueffling — a pair of expats from Australia and Germany, respectively, with two young children — Halliday conceived a chic apartment in Manhattan’s Flatiron District with pale, cool walls, furnishings upholstered in jewel-toned silk, graphic rugs and generous smatterings of black. He layered the space with intriguing finds, including a pair of 1940s black lacquer Dorothy Draper chests with brass handles from 1stdibs.

So far in New York, BKH has done mostly residential interiors. What Halliday craves more of, he says, are commissions to design public spaces, perhaps something like a recent dream project in Melbourne: the Italian restaurant Rosetta, owned by celebrity chef Neil Perry. With circular, domed skylights stenciled in gold leaf and a fresco based on Andy Warhol’s Last Supper, the restaurant abounds with Italian design references, including Pucci cushions, Fornasetti screens and a rug inspired by a 1980s Missoni pattern. These references are quite likely lost on most diners, but that doesn’t matter to Halliday. The thrill of designing spaces for use by the many, he says, is that “you reach people who may not be design literate, but they respond anyway. Successful design always registers.” 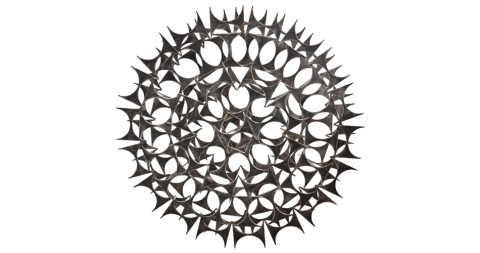 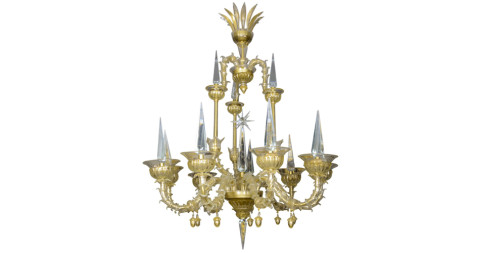 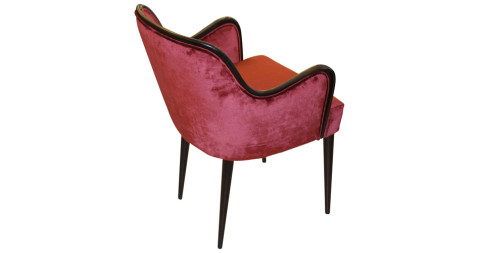 “Very pretty from any angle and comfortable as a desk, dining or side chair.“ 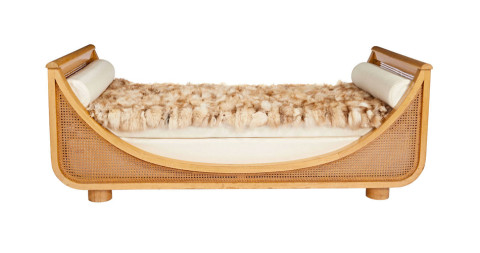 Shop Now
Jean Royère Gondola daybed, 20th century, offered by Galerie XX
“I adore just about anything by Jean Royère — the line work is quirky and incredibly refined at the same time.“ 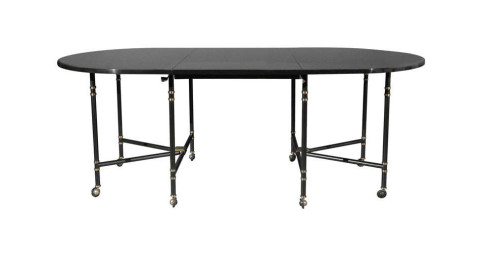 “This is a wonderful table — slender, elegant, practical and at home with many chair styles. Great as a desk as well as for dining.“ 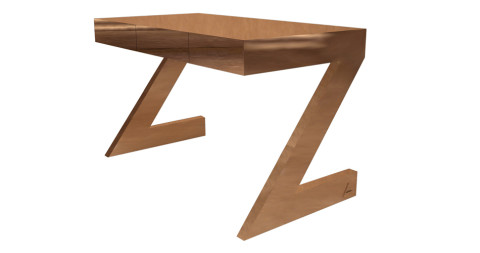