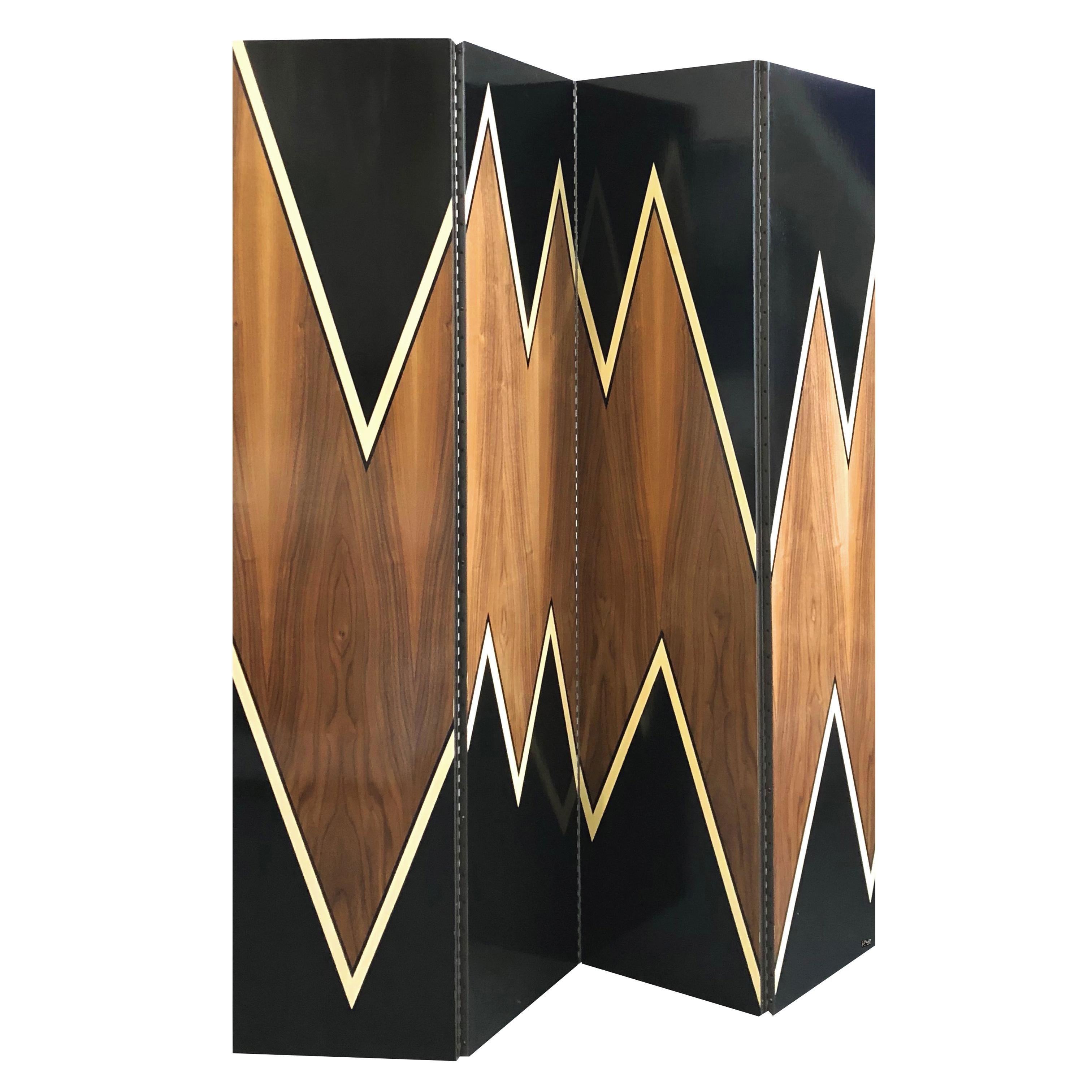 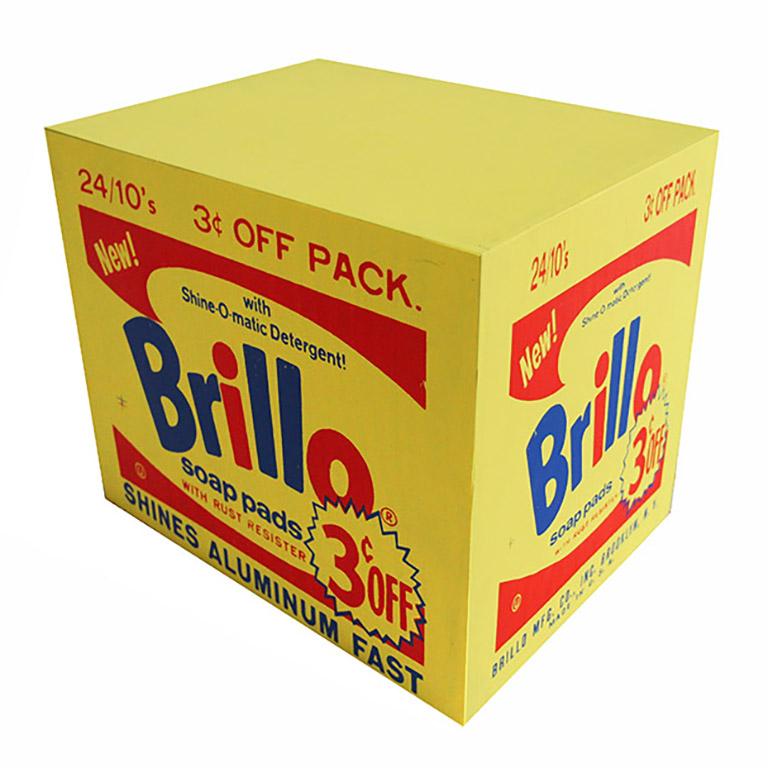 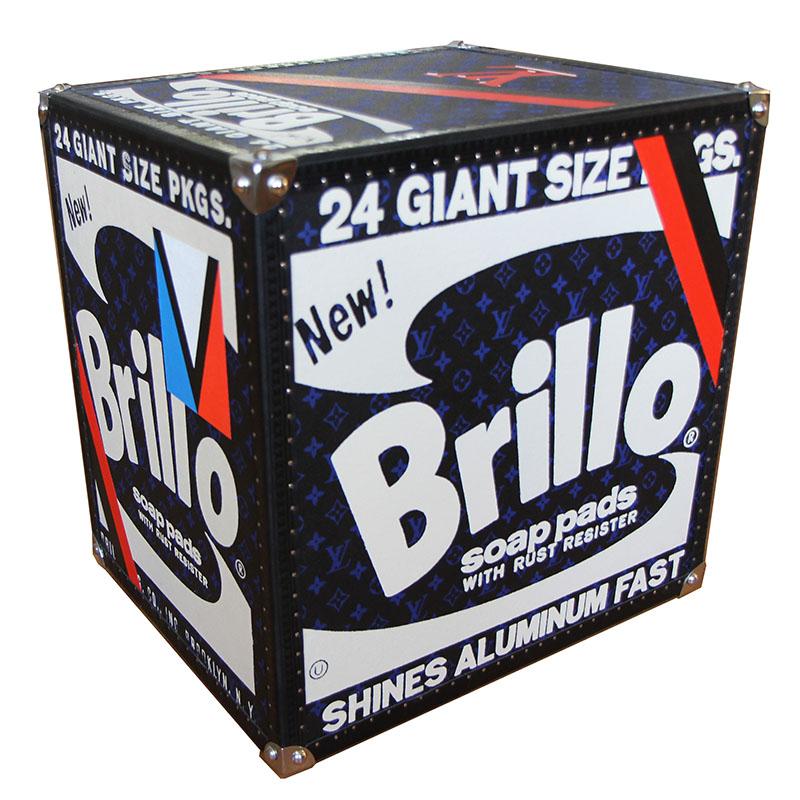 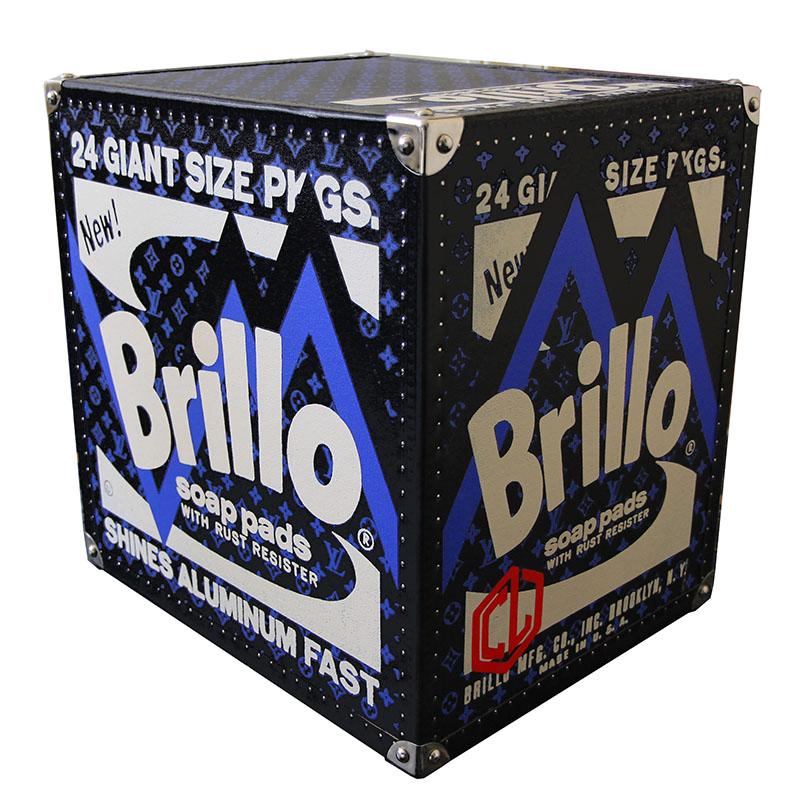 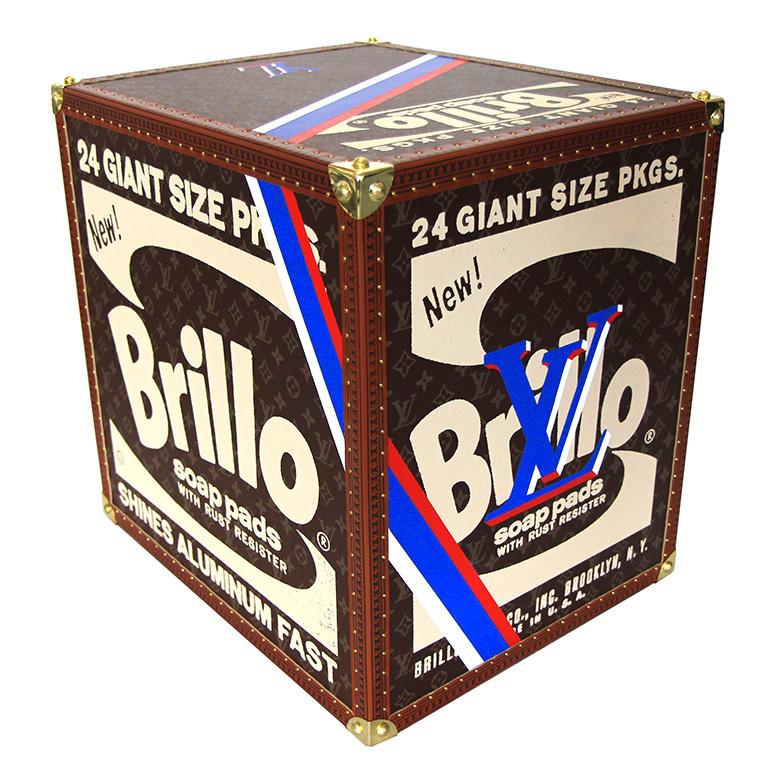 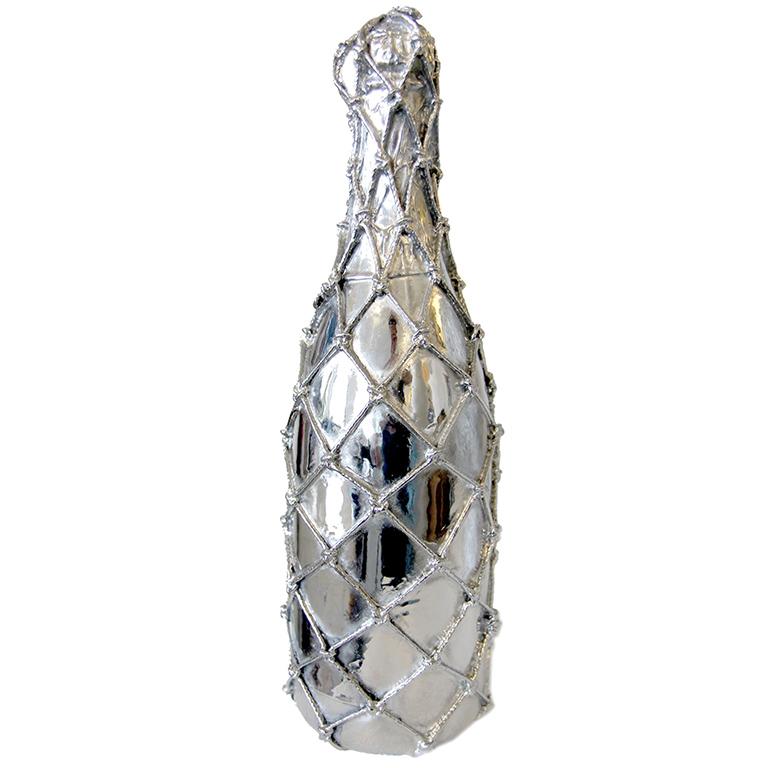 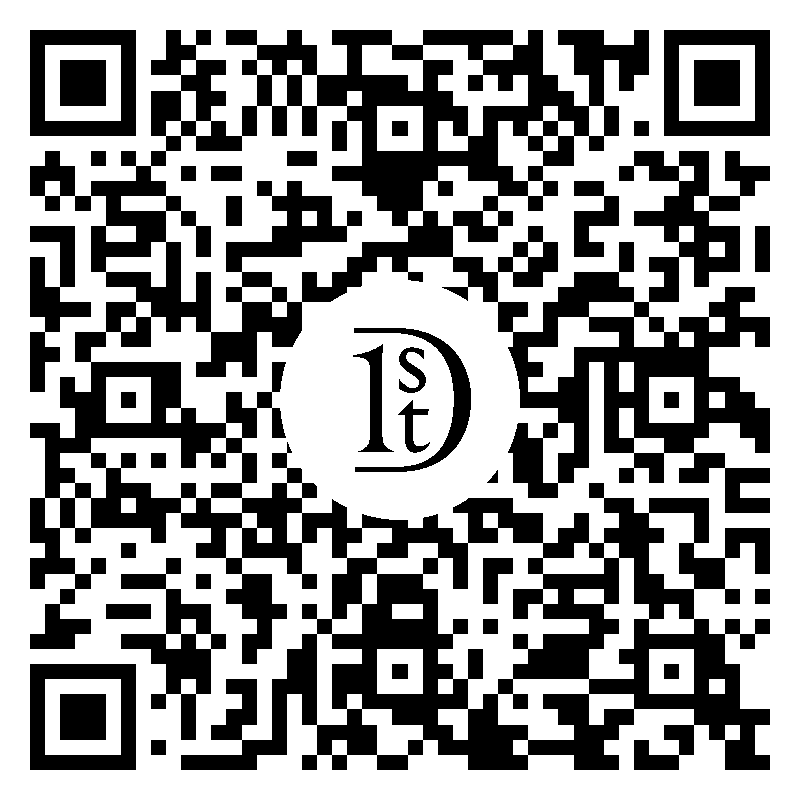 Denied Warhol Brillo Box, Contemporary Pop Art Sculpture by Charles Lutz. Silkscreen and latex paint on wood, stamped Denied with the Andy Warhol Art Authentication Board's mark. 17 x 14 x 17" 2008 Lutz's 2007 ''Warhol Denied'' series gained him international attention calling into question the importance of originality or lack thereof in the work of Andy Warhol. The authentication/denial process of the [[Andy Warhol Art Authentication Board]] was used to create value by submitting recreations of Warhol works for judgment with the full intention for the works to be formally marked "DENIED". The final product of the conceptual project being "officially denied" "Warhol" works authored by Lutz. Andy Warhol's Brillo Boxes were originally created in 1964 and are easily his most iconic sculptures, rivaling paintings like Liz Taylor, Marilyn Monroe, Elvis, Campbell's Soup Cans, Flowers and Electric Chairs. These highly prized sculptures continue to soar in value and were the subject of a recent HBO documentary, “Brillo Box (3¢ Off)”, which also included Charles Lutz. Lutz, also known for the installation work Babel, exhibited at the 2013 Armory Fair in New York City which caused near riots as he invited the fair goers to take cardboard versions of the Brillo Box Sculptures. "In the mid-1960s, Warhol carried his consumer-product imagery into the realm of sculpture. Calling to mind a factory assembly line, Warhol employed carpenters to construct numerous plywood boxes identical in size and shape to supermarket cartons. With assistance from Gerard Malanga and Billy Linich, he painted and silkscreened the boxes with different consumer product logos: Kellogg’s Corn Flakes, Brillo soap pads, Mott’s apple juice, Del Monte peaches, and Heinz ketchup. The ﬁnished sculptures were virtually indistinguishable from their cardboard supermarket counterparts. Warhol ﬁrst exhibited these at the Stable Gallery in 1964, cramming the space with stacked boxes that recalled a cramped grocery warehouse. He invited collectors to buy them by the stack, and, though they did not sell well, the boxes caused controversy. In reference to his boxes, Warhol later said that he “wanted something ordinary,” and it was this mundane, commercial subject matter that infuriated the critics. The perfectly blank “machine-made” look of Warhol’s boxes contrasted sharply with the gestural brushstrokes of abstract expressionist paintings." - The Andy Warhol Museum Lutz has been exhibited and done major projects with The New Museum, New York, NY, The Armory Show, New York, NY, Carnegie Museum, Pittsburgh, PA, The Andy Warhol Museum, Pittsburgh, PA, Witte de With Center for Contemporary Art, Rotterdam, Netherlands, Artipelag Museum, Stockholm Sweden amongst others. Lutz lives and works in Brooklyn, New York. Also used as a functional object like a side table, end table, or coffee table, it is common for collectors to encase these sculptures in plexiglass to protect the work while it is being enjoyed in the home. 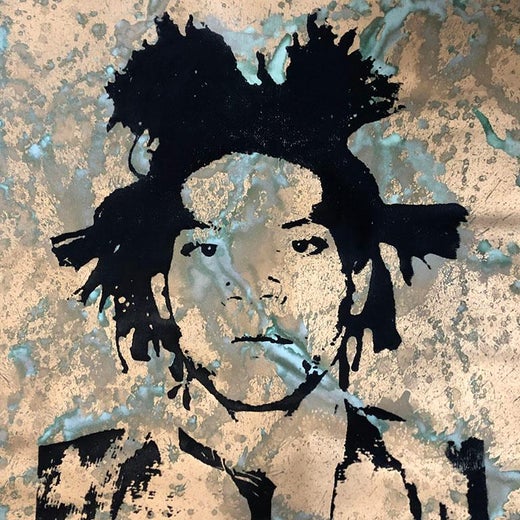 Charles Lutz received his BFA in painting and art history from Pratt Institute and studied human dissection and anatomy at Columbia University, New York. Lutz's work deals with perceptions and value structures, specifically the idea of the transference of values.

Lutz's 2007 “Warhol Denied” series received international attention calling into question the importance of originality in a work of art. The valuation process (authentication or denial) of the Andy Warhol Art Authentication Board was used by the artist to create value by submitting recreations of Andy Warhol works for judgment, with the full intention for the works to be formally marked "DENIED" of their authenticity. The final product of this conceptual project being "Officially DENIED" "Warhol" paintings authored by Lutz.

Later in 2013, Lutz went on to do one of his largest public installations to date. At the 100th anniversary of Marcel Duchamp's groundbreaking and controversial Armory Show, Lutz was asked by the curator of Armory Focus: USA and former director of the Andy Warhol Museum, Eric Shiner, to create a site-specific installation representing the United States. The installation "Babel" (based on Pieter Bruegel's famous painting) consisted of 1,500 cardboard replicas of Warhol's Brillo Box (Stockholm Type) stacked 20 feet tall. All 1,500 boxes were then given to the public freely, debasing the Brillo Box as an art commodity by removing its value, in addition to debasing its willing consumers.

(Biography provided by Code of Honor)

About the Seller
5.0
Located in Brooklyn, NY
Vetted Seller
These experienced sellers undergo a comprehensive evaluation by our team of in-house experts.
Established in 2009
1stDibs seller since 2019
13 sales on 1stDibs
More From This Seller

$12,500
Flowers F&S II.6
By Andy Warhol
Located in Miami, FL
From the edition of approximately 300 (none of which were numbered). Offset Lithograph in colors signed and dated in ink in the lower margin. Publisher: Leo Castelli Gallery, New Yo...
Category