Price
Item Location
Sort By
Mid-20th Century Italian Mirror
Located in Herzele, BE
This 20th century Italian mirror is a real decorative item to give your interior that extra touch.
Category 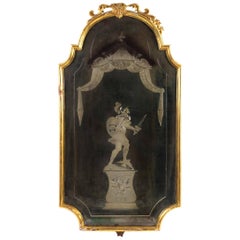 H 36 in. W 19 in. D 1 in.
Mid Century Italian Mirror
Located in Hudson, NY
This very dramatic large modern mirror has circle cut corners and excellent but restained engraving to the mirror border frame. The engraving is in the form of an elongated oval with...
Category

H 69.3 in. W 37.41 in. D 3.94 in.
18th Century Italian Mirror
Located in New York, NY
A rare and elegant Italian 18th century giltwood Venetian mirror. Having finely painted flora on all, but the main mirror plate, foliate and garland carving throughout the frame.
Category

H 34.65 in. W 25.2 in. D 3.15 in.
Early 18th Century Italian Mirror
Located in Hastings, GB
An exceptional split plate Italian mirror Dating to circa 1730, Genoa, Italy. This astonishing mirror is of exceptional proportions, the split mercury plate foxed and worn to p...
Category

H 57.5 in. W 33 in. D 4.5 in.
Large 18th Century Italian Vanity Mirror
Located in San Francisco, CA
An impressive, beautifully carved and gilt 18th century Italian mirror. Original mirror shows appropriate signs of age and wear. The brace or easel on the back was probably added in ...
Category

H 28.25 in. W 26.75 in. D 9 in.
Cristal Arte Italian Midcentury Mirror 50's
By Pietro Chiesa
Located in bari, IT
Beautiful mirror in the Italian neoclassical style Cristal Arte. This fabulous mid-century Italian mirror has an unusual gold decorated design. signs of wear on the mirror.
Category

H 35.24 in. W 23.43 in. D 0.6 in.
Italian Mid-Century Mirror Amber-Gold Faceted Surfaces 1970s
Located in Salzburg, AT
Mid-century Italian mirror with amber-colored glass frame. All surfaces have a 1cm thick facet and are edged with a fine brass bar. This creats a different refraction of light and m...
Category

H 31.7 in. W 23.82 in. D 1.19 in.
Rare Mirror with Leather Frame, Italy 1960s
By Osvaldo Borsani
Located in London, GB
A rare mid-century Italian mirror in floating leather in the style of Osvaldo Borsani. The mirror is authentic, dated 1960s, its original condition are represented in the pictures; t...
Category

H 41.34 in. W 22.05 in. D 3.55 in.
Italian 19th Century Rococo Style Carved Mirror with Traces of Gilt and Scrolls
Located in Atlanta, GA
An Italian Rococo style carved mirror from the 19th century, with traces of gilt. Created in Italy during the 19th century, this piece features a polygonal mirror plate surrounded by...
Category

H 56.5 in. W 70 in. D 2 in.
Italian 19th Century Gilt & Red Embossed Repoussé Mirror, Tall
Located in Atlanta, GA
An Italian embossed repoussé mirror from the 19th century. This antique mirror from Italy features a repoussage or chasing/embossing floral and leaf motif in metal (applied atop a wo...
Category

H 19.25 in. W 13.25 in. D 5.75 in.
Large 17th Century Giltwood Baroque Mirror from Italy
Located in Dallas, TX
This magnificent and large, oval, giltwood Italian mirror is in the Baroque style. It is highly sculptural with a large cherub mask in full form at the top with its wings flowing to ...
Category

H 32 in. W 32 in. D 2 in.
Italian Pair of 19th C. Rococo Style Carved Wall Mirrors w/Original Finish
Located in Atlanta, GA
An Italian pair of small decorative Rococo style wall mirrors from the late 19th century. This pair of wall decorations from Italy have been created in Rococo style and carved with a...
Category

H 31 in. W 13 in. D 9 in.
An Italian Early 19th Century Carved-Wood Mirror w/its Original Finish
Located in Atlanta, GA
An Italian carved-wood mirror, with its original finish, from the early 19th century. This antique mirror from Italy has a hand-carved and beautifully textured surround with varied t...
Category

H 23 in. W 19 in. D 2.5 in.
Pair of Mid-Century Italian Mirrors with Lights Gold Brass Gio Ponti Style
By Gio Ponti
Located in Palermo, Sicily
Delightful pair of mirrors with lights, albeit rare and of great Italian design, are very reminiscent of the style of the great Italian architect who made the history of Gio Ponti de...
Category

H 28.35 in. W 28.35 in. D 6.7 in.
Italian Mirror in Nickeled Brass
By Midcentury Italian school
Located in Milano, IT
Wonderful Italian vintage mirror in brass from the 40s. Its special feature is its shape, which resembles a heart. The edge of the mirror is made of nickel plated brass and has a b...
Category

H 29.14 in. W 22.45 in. D 1.19 in.
Divino Lighted Wall Mirror
By Unica Luxury Lighted Mirrors
Located in Milan, IT
Transforming a daily beauty routine into a luminous and luxurious experience, this glamorous lighted mirror provides the perfect lighting thanks to the patented I-Light technology de...
Category

H 27.56 in. W 40.16 in. D 2.56 in.
Hollywood Lighted Wall Mirror
By Unica Luxury Lighted Mirrors
Located in Milan, IT
Iconic in its design reminiscent of Hollywood glamour, this backstage-style mirror is the ultimate statement-making piece for every fashionista. Combining brightness and simple elega...
Category

H 46.86 in. W 34.06 in. D 2.96 in.
MH Frameless Rectangular Lighted Wall Mirror
By Unica Luxury Lighted Mirrors
Located in Milan, IT
Exuding elegance from top to bottom, this lighted mirror provides the optimal illumination from all angles. Impeccable crafted, the mirror is mounted on a silver anodized aluminum fr...
Category

H 28.75 in. W 21 in. D 1.75 in.
Italian 18th Century Giltwood Mirror
Located in West Palm Beach, FL
A very high quality and most elegant Italian 18th century giltwood mirror. The frame with a very attractive and richly carved cabochon design has a top central shell amidst a pierced...
Category

H 39 in. W 24 in. D 1 in.
Italian 18th Century Venetian Mirror
Located in West Palm Beach, FL
A stunning and most unique Italian 18th century Venetian mirror. The central mirror plate is framed within a most decorative mirrored geometric pattern secured by their original iron...
Category

H 73.25 in. W 45 in. D 3 in.
Italian 19th Century Giltwood Mirror
Located in West Palm Beach, FL
A beautiful mid 19th century Italian giltwood mirror with a satin and burnished finish. The mirror has 'S' scrolls at the bottom accented with acanthus leaves and a wide bottom borde...
Category

H 56 in. W 37 in. D 4 in.
Mid-Century Grande Italian Mirror
Located in Austin, TX
Mirror from Italy. This Mid-Century Modern piece has an elegant; curvaceous mirror surrounded by a gilt brass frame. We love the scalloped shape of the top and bottom.
Category

H 36.5 in. W 24.5 in. D 1.5 in.
18th Century Italian Giltwood Mirror
Located in Los Angeles, CA
Late 17th century-early 18th century Italian carved giltwood and gilt decorated mirror. This mirror can be hung either horizontally or vertically. The measurements below are for the ...
Category

H 53 in. W 62 in. D 3 in.
Get Updated with New Arrivals
Save "Century Italian Mirror", and we’ll notify you when there are new listings in this category.

How Much is a Century Italian Mirror?

5 Standout Contemporary Mirrors (and How to Decorate with Them)

Leading talents tell us what goes into their mirrored creations and where to put them on a wall.

These are the fairest of them all.