H 9.85 in. Dm 1.19 in.
Pablo Picasso Madoura Ceramic Plaque - Bouquet à la pomme, Ramié 305
By Pablo Picasso
Located in New York, NY
This Picasso ceramic plaque "Bouquet à la pomme" is one in an edition of 400 and is made of white earthenware ceramic with black oxide, coloured engobe and glaze. The piece is stampe...
Category

H 9.75 in. Dm 9.75 in.
Pablo Picasso Madoura Ceramic Plate - Bouquet à la pomme, Ramié 307
By Pablo Picasso
Located in New York, NY
This Picasso ceramic plate "Bouquet à la pomme" is one in an edition of 400 and is made of white earthenware clay, decoration accentuated with oxidized paraffin, oxides under glaze. ...
Category 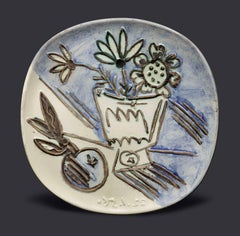 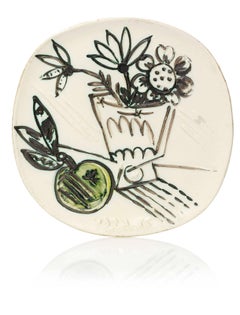 H 1 in. Dm 9.87 in.
Pommes, Verre et Couteau, Pablo Picasso
By Pablo Picasso
Located in New York, NY
This scraped wash drawing on lithographic paper, transferred to stone, printed on Arches paper was produced in 1947. It measures 17 1/2 x 12 3/8 in. (B. 429) Accompanied by Certific...
Category

H 17.5 in. W 12.38 in.
Pablo Picasso, Madoura Ceramic Plaque, Bouquet à la Pomme, 1956
By Pablo Picasso
Located in Dallas, TX
This Picasso ceramic plaque "Bouquet à la pomme" is one in an edition of 400 and is made of white earthenware ceramic with black oxide, colored engobe and glaze. The piece is stamped...
Category

Picasso Pomme For Sale on 1stDibs

On 1stDibs, you can find the most appropriate picasso pomme for your needs in our varied inventory. You can easily find an example made in the Abstract style, while we also have 1 Abstract versions to choose from as well. Making the right choice when shopping for a picasso pomme may mean carefully reviewing examples of this item dating from different eras — you can find an early iteration of this piece from the 20th Century and a newer version made as recently as the 20th Century. If you’re looking to add a picasso pomme to create new energy in an otherwise neutral space in your home, you can find a work on 1stDibs that features elements of beige, gray, brown and more. Finding an appealing picasso pomme — no matter the origin — is easy, but Pablo Picasso each produced popular versions that are worth a look. Frequently made by artists working in ceramic, earthenware and lithograph, these artworks are unique and have attracted attention over the years.

How Much is a Picasso Pomme?