Dan Allison first made his mark on the art world in the late 1970s with his instantly recognizable aquatint etchings, created through a revolutionary one-plate, three-color printmaking process that the artist pioneered and refined while attending Sam Houston University in Huntsville, Texas. The artist earned a bachelor of fine arts degree with an emphasis on printmaking from the University in 1978.

In 2000, Allison turned his attention toward first establishing a printmaking studio, Texas Collaborative Arts, with an emphasis on the collaborative aspects between printer and artist. In 2007, he established the Nau-haus art venue, where he presented more than 60 exhibitions between 2007 and 2011 before moving to his present location in Houston's Upper Kirby Gallery district on Gallery Row. There, the D.M. Allison gallery continues as a venue dedicated to the exploration of new and emerging talent as well as established work by regional and nationally recognized independent visual artists with ideals, direction and conviction.

Red and Yellow Triangular Abstract Painting
By Dan Allison
Located in Houston, TX
Abstract geometric painting of triangular forms on a red and yellow field by artist Dan Allison in 2004. Artist Biography: Allison first made his mark on the art world in the late ...
Category

Related Items
Turn of the Century Children in White Edition 2 of 25
Located in Houston, TX
Category 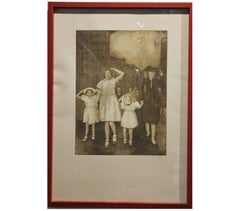 carol-jeanne-burt
Turn of the Century Children in White Edition 2 of 25, 20th Century 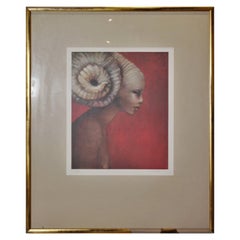 Abstract Portrait Study of Two Figures with a Hand, 1976

Previously Available Items
Brightly Colored Checkered Figures Edition 21 of 60
By Dan Allison
Located in Houston, TX
Pop art styled figures with a checkered pattern. The lithograph is signed by the artist. It pairs well with our other listing with the Reference number of LU55134494491. It is framed...
Category

H 24 in. W 30.5 in. D 1.5 in.
Brightly Colored Checkered Figures Pop Art Lithograph
By Dan Allison
Located in Houston, TX
Two checkered figures in a pop art style with mainly yellow and blue tones. The work is signed by the artist in the bottom right corner. It is framed in a floating acrylic frame. Thi...
Category

H 24 in. W 30.5 in. D 1.5 in.
"Tigger And The Kangerabbit" Surrealist Lithograph
By Dan Allison
Located in Houston, TX
Colorful surrealist lithograph of women and animals on a black background by artist Dan Allison, edition 11/11, dated 1976. Artist Biography: Allison first made his mark on the art...
Category