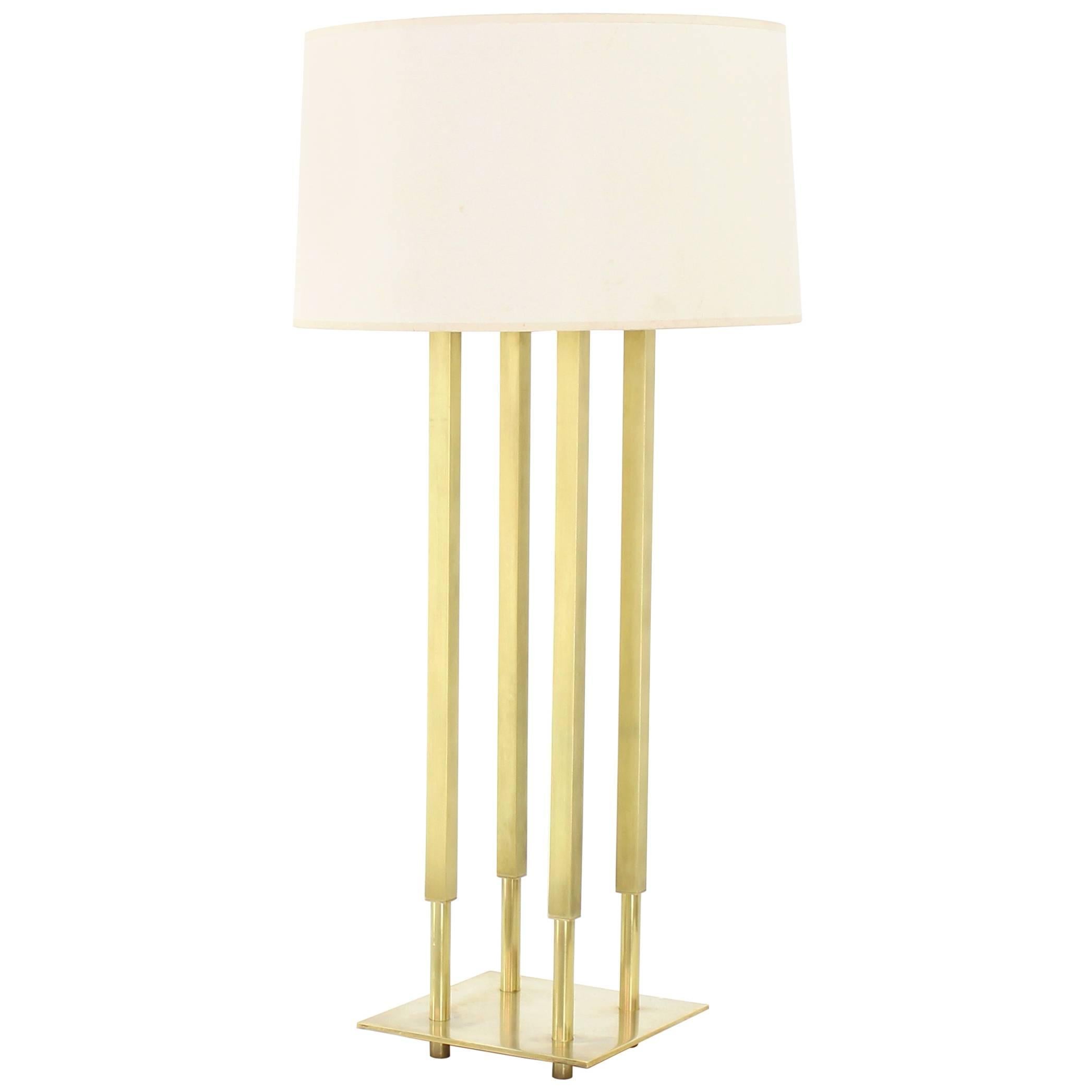 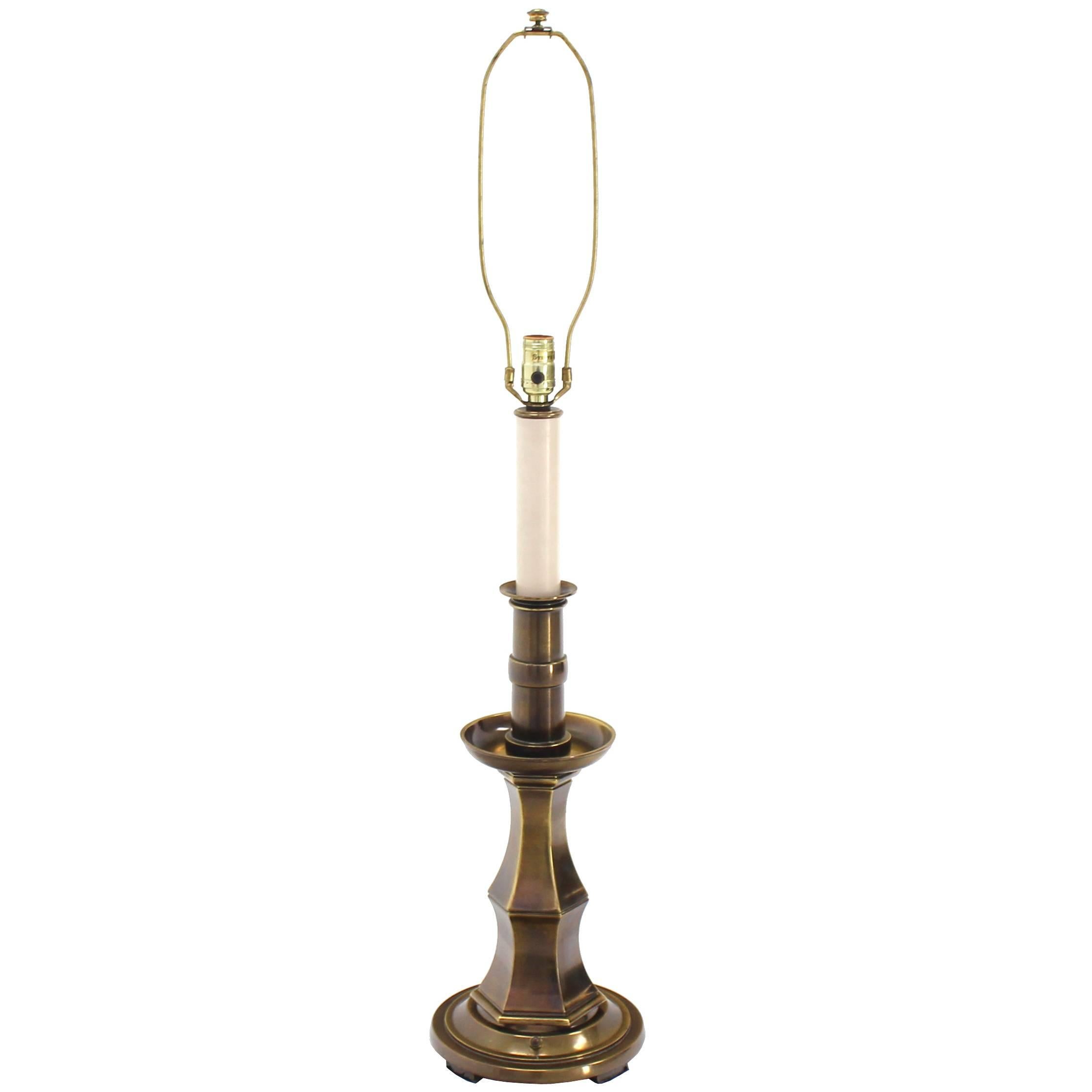 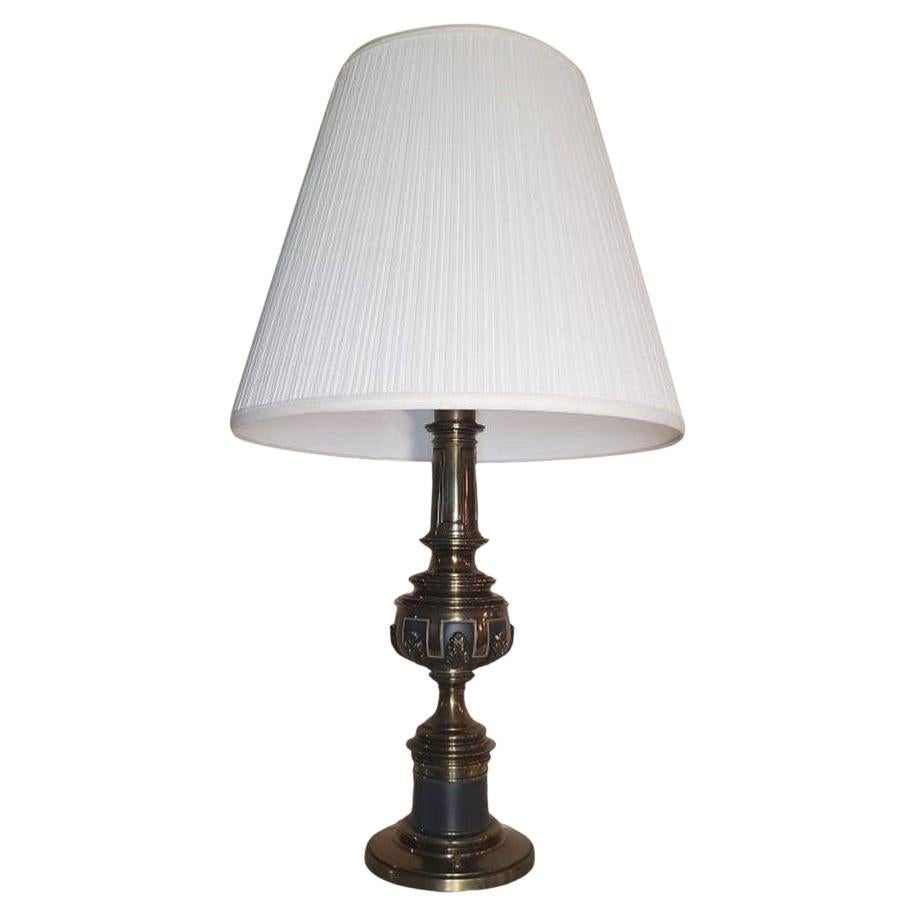 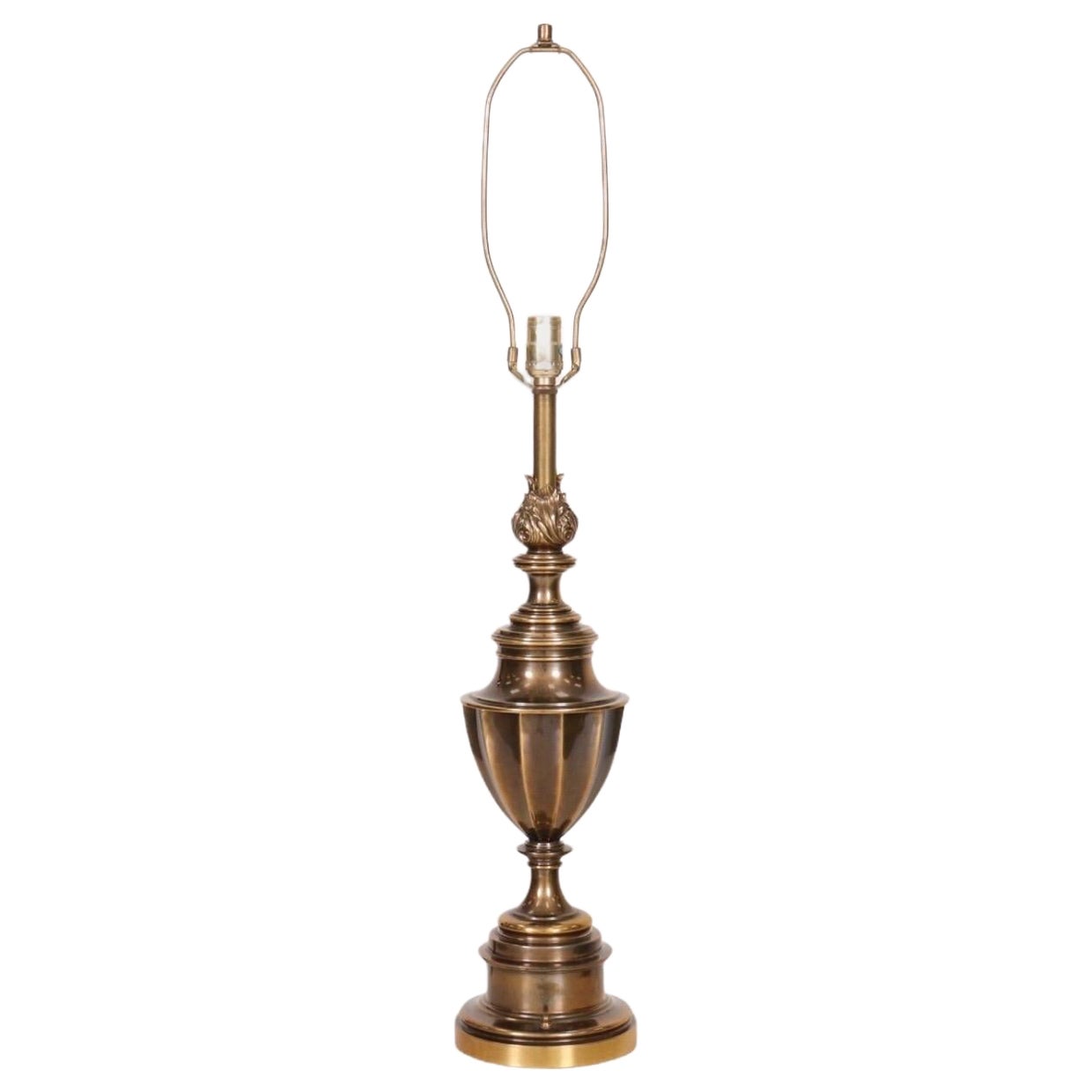 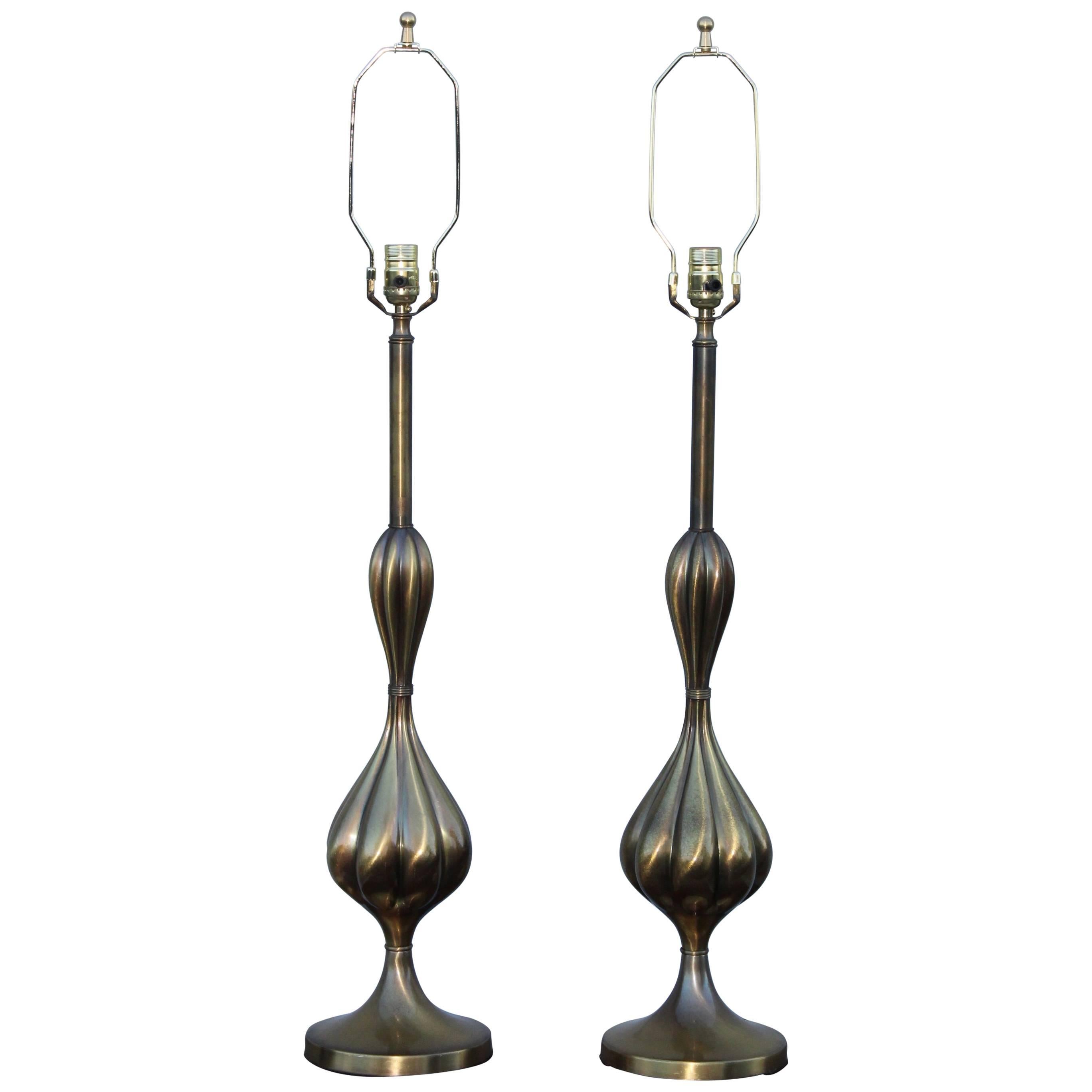 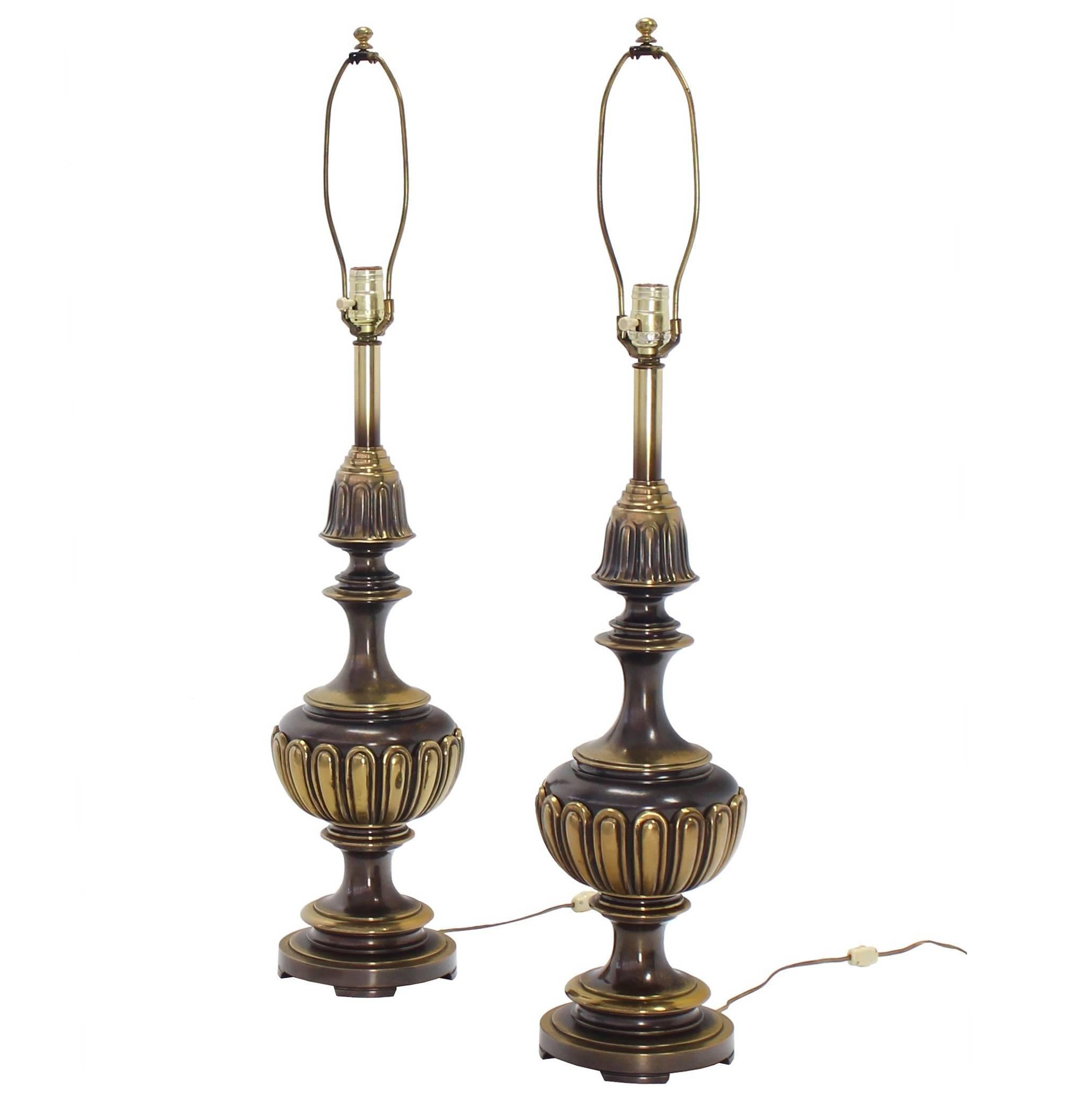 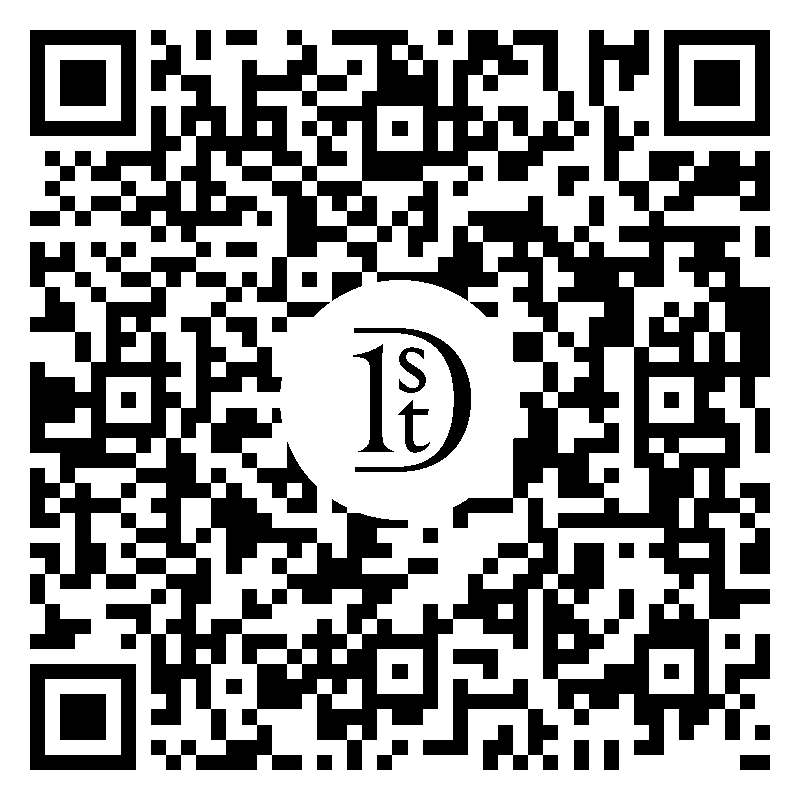 This large table lamp was manufactured by Stiffel in the 1960s and features a double socket and three illumination settings. The heavy patina to the brass (by design) gives it a dark, almost bronze-like appearance. Polished and cleaned, but very minor tarnish remains. Socket retains the Stiffel label. Newly rewired and ready for use. 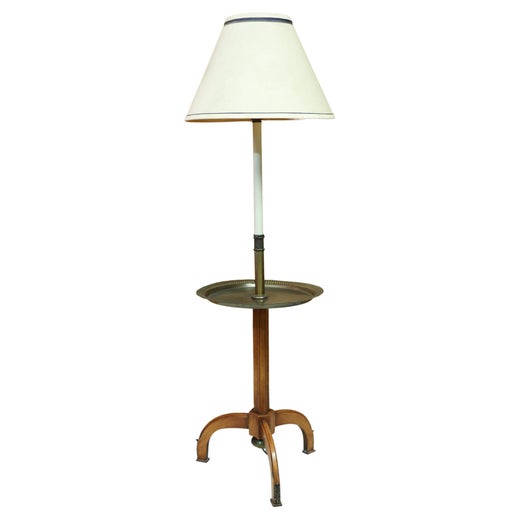 When Ted Stiffel (1899–1971) founded Stiffel in 1932 in Chicago, he wanted to make functional, thoughtfully designed table lamps and other fixtures that were available at an accessible price. Born in Memphis, Stiffel first pursued a career in music before serving in World War I. After his discharge, he worked with the Western Electric Company in Chicago and then the Nellie J. Kaplan Company, a lighting firm also in the Windy City.

After he started his own lamp business, Stiffel began supplying area department stores and by the 1940s had opened a large factory that was producing lamps for nationwide sale, eventually competing with the likes of the Frederick Cooper Lamp Company, also based in Chicago. In 1948, designer Edwin J. Cole joined the company and created some of the firm’s most striking table lamps. Today, Cole’s vintage mid-century modern lighting fixtures for Stiffel, frequently with distinctively tall and shapely ceramic bodies and finished with decorative brass chinoiserie details, are highly prized by collectors.

One of Stiffel’s innovations was his patented switch, which simplified turning lights on and off: All someone had to do was grasp a lamp’s pole and gently pull down. He also designed a pole lamp with a vertical tube that held a series of fixtures on the outside. The upright pole lamp was so innovative that Sears, Roebuck and Company copied it. Stiffel sued, and the case ended up in the Supreme Court in 1964. The ruling against Stiffel was influential in whether states can give a patent to objects that do not have the invention required of federal patents.

After declaring bankruptcy in 2000, the brand was revived in 2013 in Linden, New Jersey, where newly produced high-quality lamps carry the Stiffel name.

Find a collection of vintage Stiffel lighting on 1stDibs.

1stDibs Buyer Protection Guaranteed
If your item arrives not as described, we’ll work with you and the seller to make it right. Learn More
About the Seller
5.0
Located in Brooklyn, NY
Platinum Seller
These expertly vetted sellers are 1stDibs' most experienced sellers and are rated highest by our customers.
Established in 2007
1stDibs seller since 2015
488 sales on 1stDibs
Typical response time: 1 hour
More From This SellerView All
People Also Browsed
You May Also Like
Featured in Rare Finds: Shop our best valuesView All