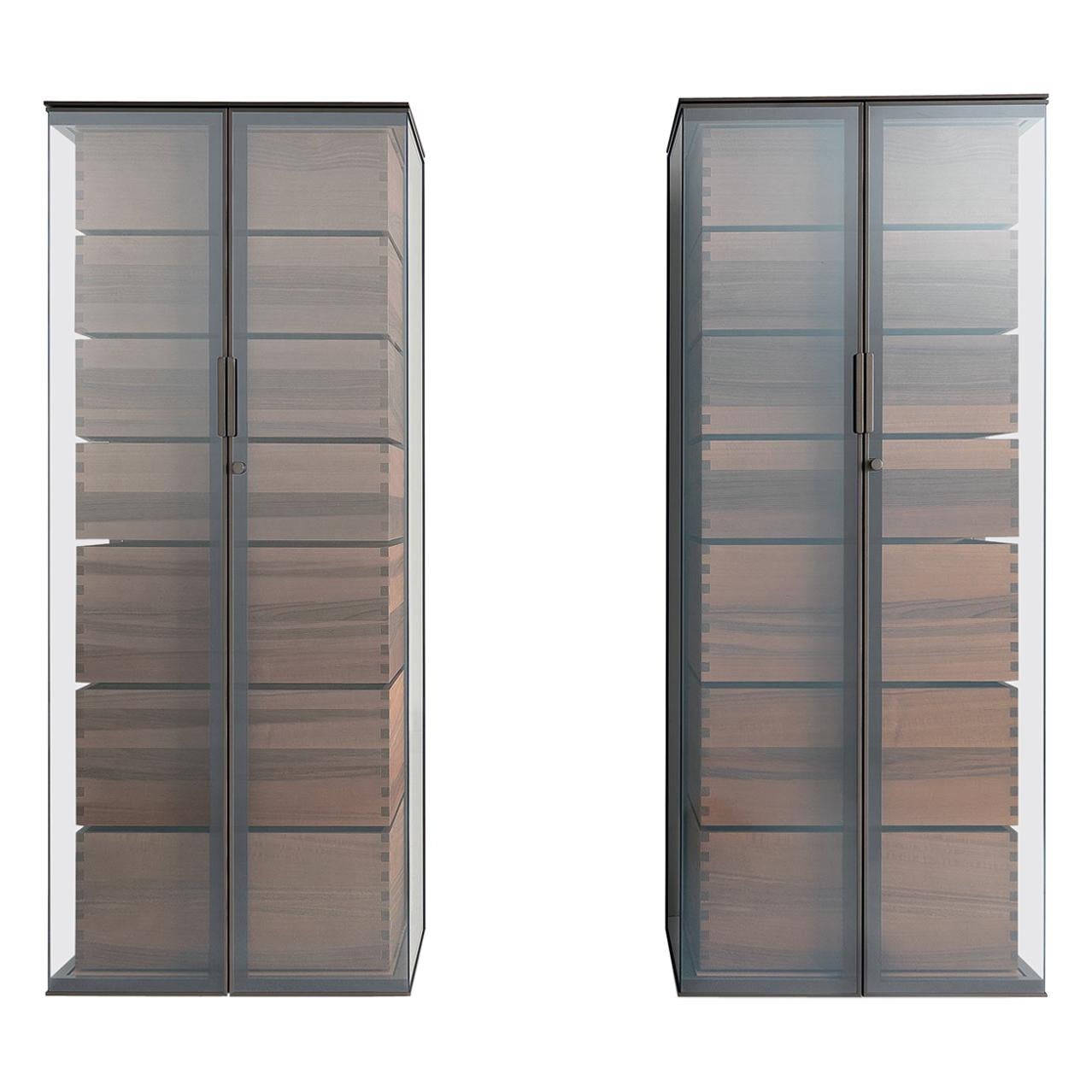 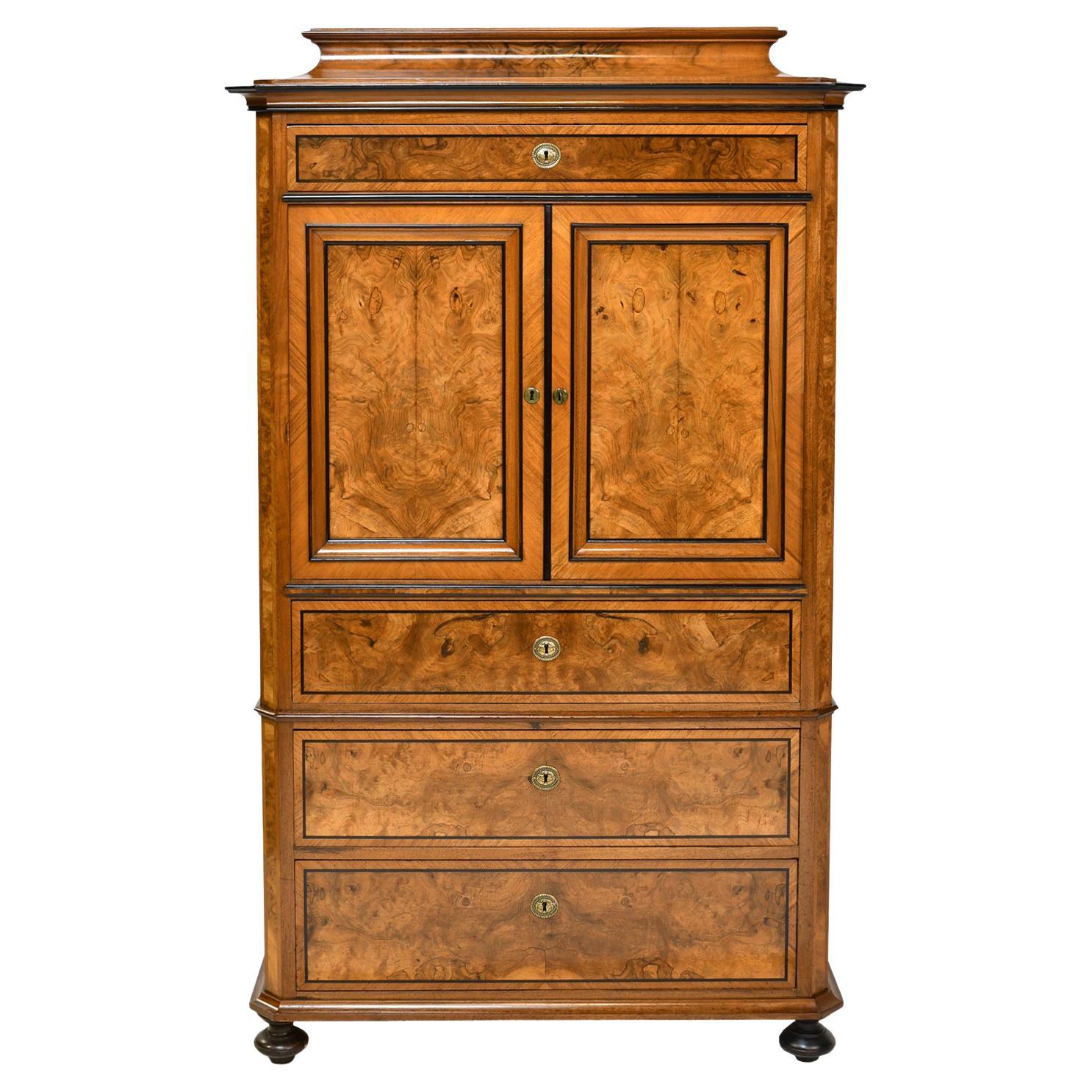 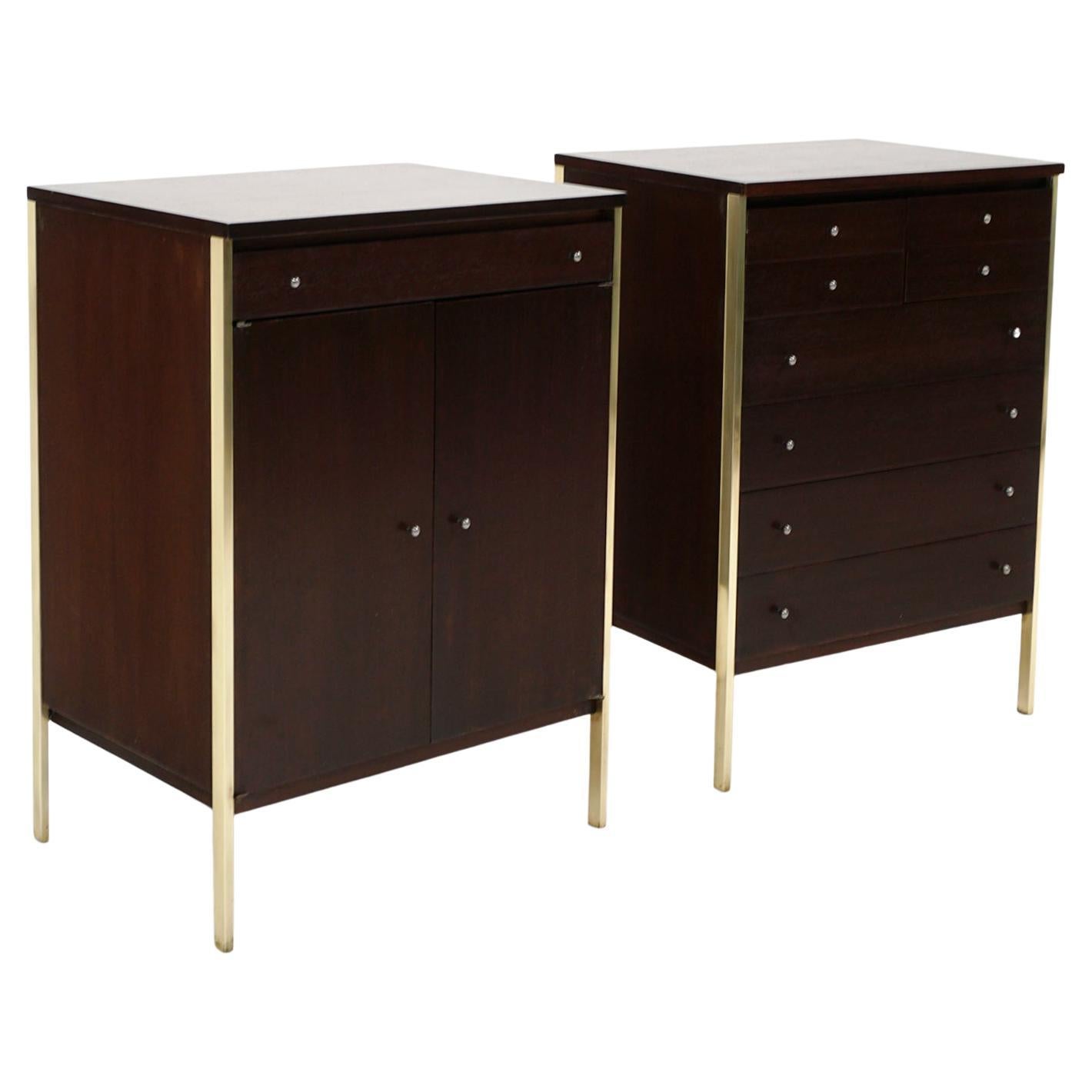 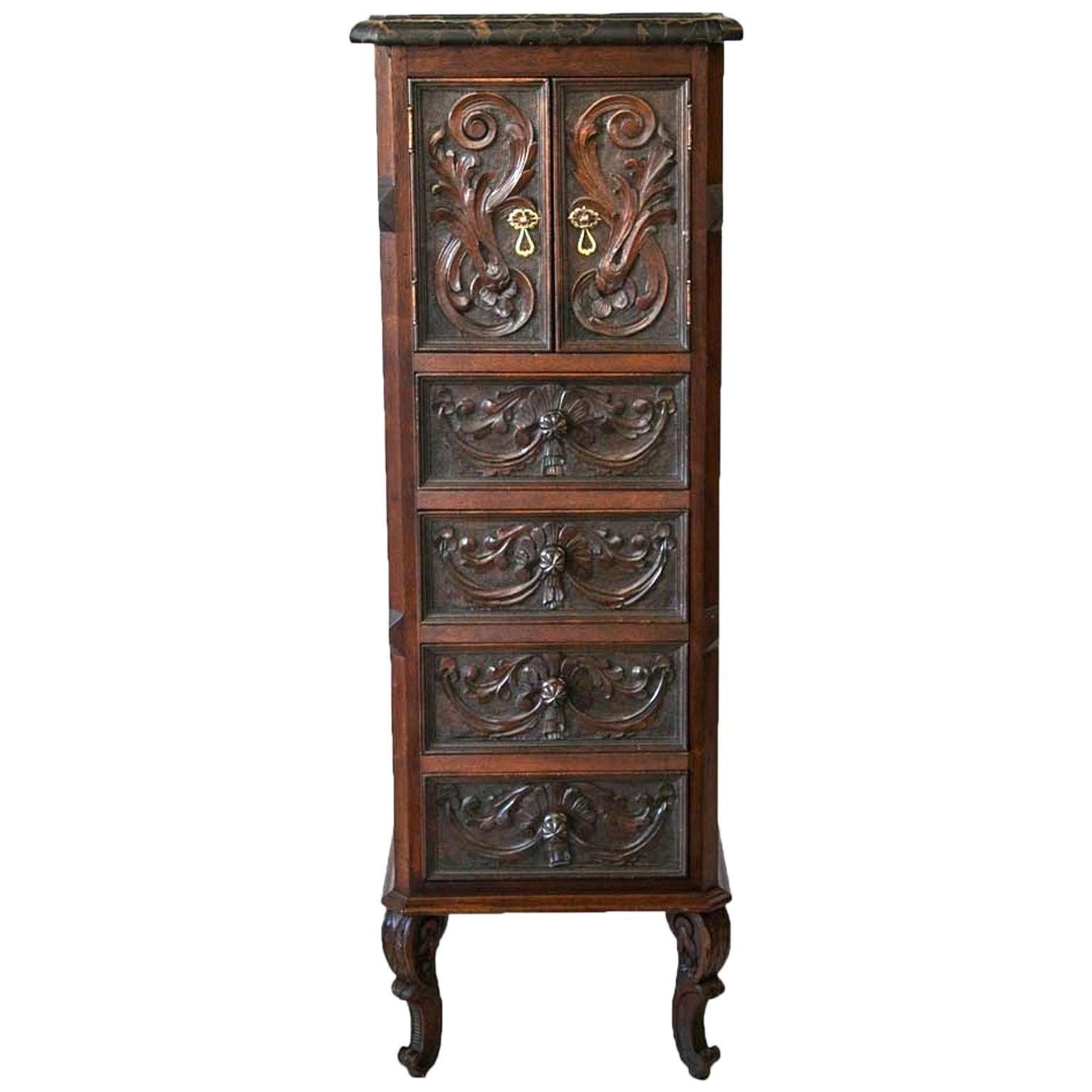 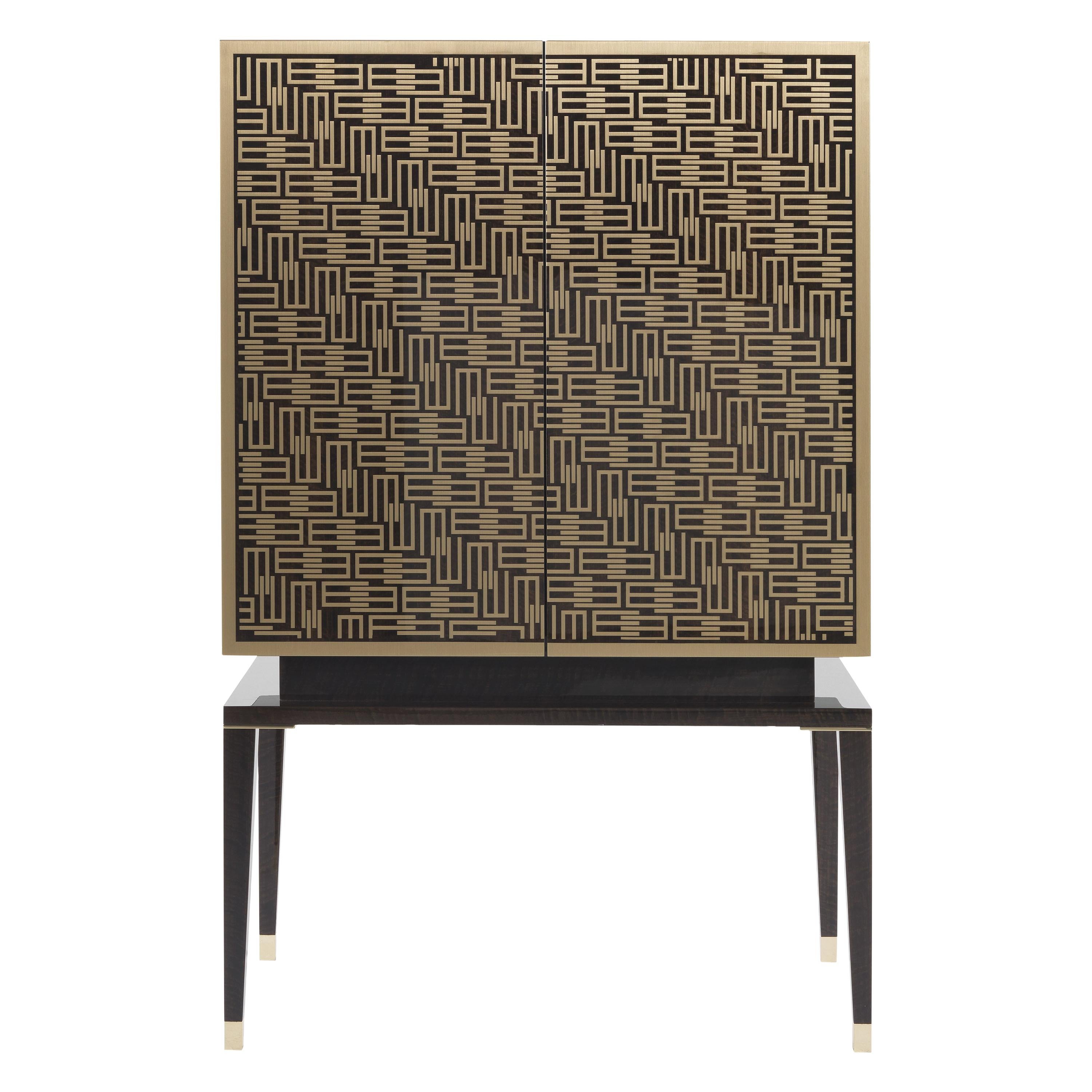 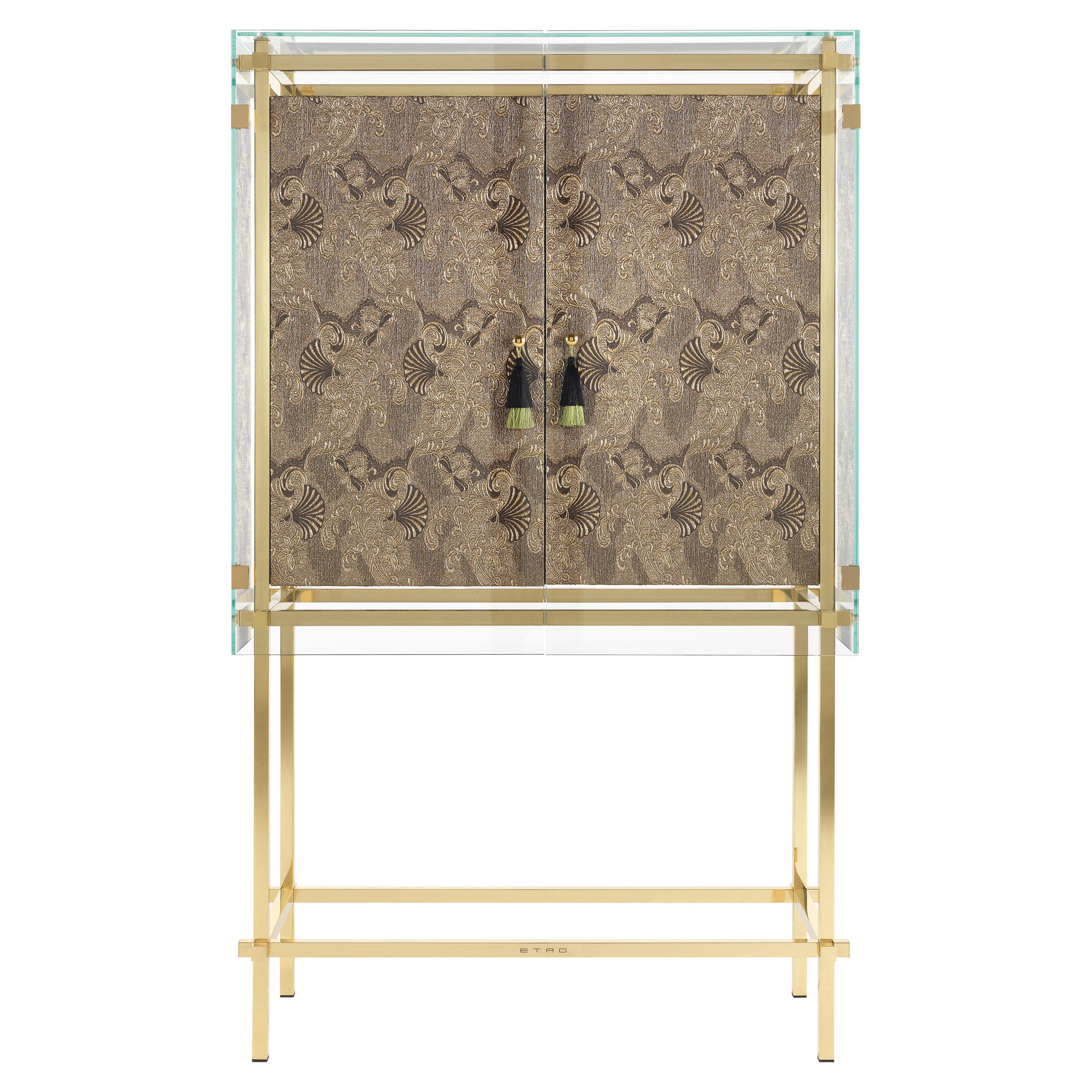 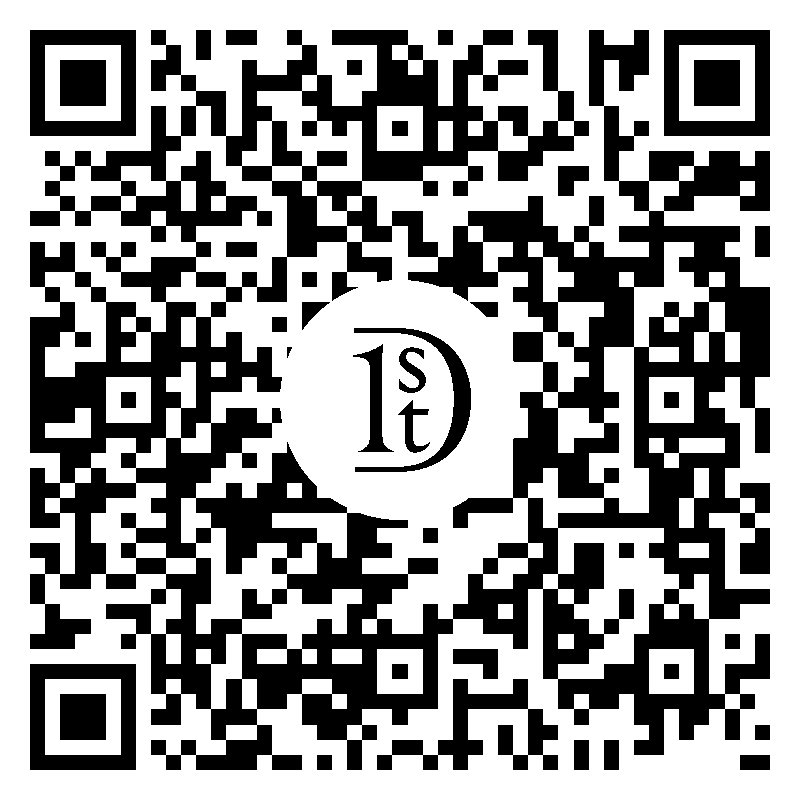 Studio B.B.P.R. (Lodovico Barbiano di Belgiojoso, Enrico Peressutti, Ernesto Nathan Rogers), cabinet, walnut, brass, lacquered metal, Italy, 1960s. This delicate small cabinet is designed by Studio B.B.P.R. in the 1960s. Furnished with seven drawers, this cabinet provides plenty of space to store your personal belongings. Its frame is executed in the finest walnut wood that shows a warm grain pattern. As characteristic for mid-century design, this cabinet features a tambour door that can be opened upwards, implemented in the upper compartment. Four sleek white lacquered metal legs lift up this small chest of drawers. Studio B.B.P.R. was an Italian architectural partnership founded in Milan in 1932 by Gianluigi Banfi (1910-1945), Lodovico Barbiano di Belgiojoso (1909-2004), Enrico Peressutti (1908-1976) and Ernesto Nathan Rogers (1909-1969) who had studied at the Politecnico di Milano. B.B.P.R. was thus an acronym formed from the first letters of their family names. The architects found each other in their opposition to fascism in Italy in the 1930s and 1940s during Mussolini's autocratic regime. The architects therefore believed in developing a style that would have no references to contemporary politics. During the Second World War, they all joined the resistance. However, Rogers, a Jew, fled to Switzerland and both Belgiojoso and Banfi were deported to the Mauthausen concentration camp in Austria, where Banfi died in 1945. Despite the immense loss of Banfi, their architectural practice continued in the same name as before after the war. Especially during the 1950s, they created many of their great projects. With their designs, they strongly reacted against the International Style with its rectilinear forms and taut plane surfaces that have been completely stripped of applied ornamentation. Instead, the group enriched their buildings with medieval references. For B.B.P.R., their philosophy on art and architecture is somewhat between tradition and modernism; their use of post-beam structures and modular elements parallels with the constructive thinking of modern architects. However, as modernism rejects the existence of historical forms, B.B.P.R. reinterprets history's heritage and continues with respect for the work of their predecessors. Ernesto Nathan Rogers referred to it as “preesistenze ambientali” (the pre-existing environment) and adopt a “caso per caso” (case by case) interpretation to work with, instead of against, the surroundings. One of their well-known designs is the creation of the Torre Velasca in Milan, with strong references to medieval architecture. The architects were also frequently employed to create interior spaces altogether with furniture designs. Please note that we advise restoration before use. This can be done before shipping by our experienced craftsman in our own in-house restoration atelier. With high attention for the original, they make sure every piece retains its value and is ready for the many years to come. We kindly ask you to contact our design experts for further information about the endless possibilities our restoration and upholstery atelier has to offer. Of course, a locally organized reupholstery is possible as well.

Tall Cabinet in Glass and Walnut Wood by Giuseppe Bavuso

$17,291 / item
Danish Silver Cabinet in Figured Walnut, c. 1870
Located in Miami, FL
As in all things Danish when it come to design, execution and selection of wood this is perfection. 2 doors over 3 drawers with a 4th drawer above the cupboard and 3 small interior d...
Category

$9,850 / set
Walnut Lingerie Cabinet
Located in Wilson, NC
Walnut lingerie cabinet has a black and gold marble top. The drawer front and doors have carved floral arabesques, and the drawers have the original mushroom carved knobs. The base t...
Category

$1,600
Etro Home Interiors Tibesti Cabinet in Wood and Polished Brass
By Etro
Located in Cantù, Lombardia
A new, deco style cabinet, characterized by precious inlays in brass with a pattern that incorporates the "E", initial letter of the Etro logo. Legs, base, doors and sides are in smo...
Category

$33,070 / item
English Chippendale Small Chest/Cabinet
Located in Wilson, NC
He upper most compartment of this small chest/cabinet has a door that opens to expose the interior. The lower two are working drawers. The top has a gallery on three sides. The hardw...
Category